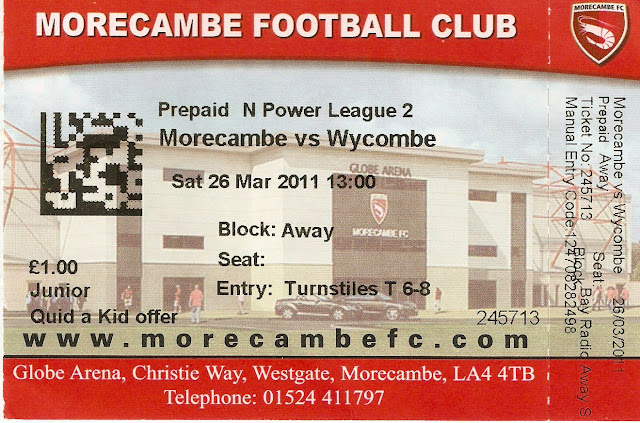 Since moving to the Globe Arena in 2010, Morecambe have been ever present in League 2. Lower half finishes have been the order of the day, with their only top half finish coming in 2014/15 when they finished 11th. Last season produced their worst ever finish when they dropped down to 21st, having been involved in a relegation battle for much of the season. This season they are well clear of the relegation zone, but it's still a fairly disappointing 18th placed finish that they sit in at the time of my latest visit.

FA Cup progress has also been disappointing since their ground move. Only once have they progressed past the 1st Round, beating Rochdale in a replay in 2012, only to lose to Coventry City in the 2nd Round. This run also included a defeat to non-league Dover Athletic in 2014. The League Cup has been a little better, with progress to the 2nd Round in their first four seasons, including notable victories over Barnsley & Wolves. 2015/16 also saw a good run in the Football League Trophy, reaching the Northern Semi-Final before defeat to Fleetwood Town. 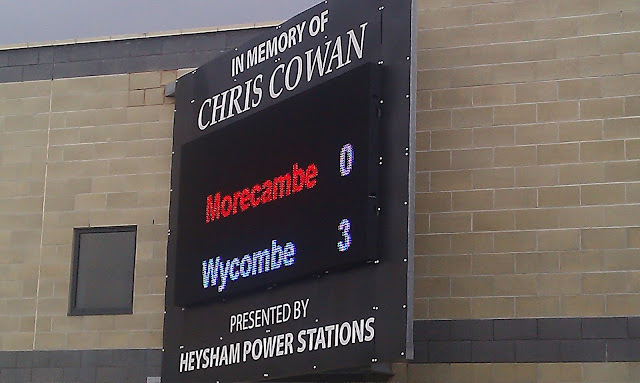 The second of the 2 new grounds in League 2 was Morecambe's Globe Arena. Their old home at Christie Park had been perfectly adequate, but for some reason, they decided to move a mile away to the new Globe Arena, a more modern version of their previous venue.

I was staying up in Blackpool for the weekend and had had a fairly heavy night drinking wise and so decided to make the short journey by train. The game was also on the same day as the Wales v England game which followed straight after, so it also took out the worry of driving after having a drink. The game yielded one of Wycombe's best performances of the season with us winning 3-0. 2 goals from Scott Rendell and the other from Gareth Ainsworth made for a simple victory as Wycombe dominated from start to finish. This victory really gave our promotion push a great boost, as we entered into the last rites of the season.

After the game, we went into the club bar and watched the Wales v England game. England won it with a more workmanlike performance than Wycombe did, but 2-0 was not a bad result all told. Afterwards, a few of us made our way back to Blackpool in good spirits, a good night out beckoned. 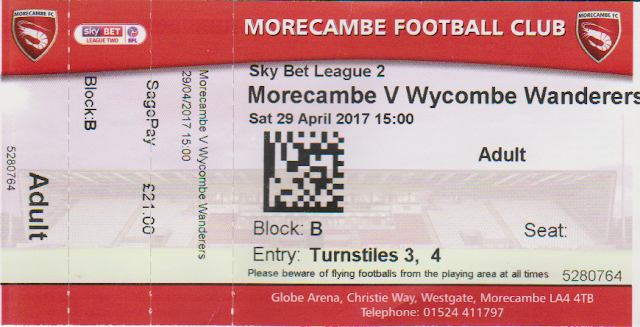 Back in June when the fixtures came out, this last game of the season was always going to be a candidate for a revisit. There were many entries on this blog (the first 170 or so) that had been done in a rush and were not as comprehensive as I'd have liked them to be.I'd actually pencilled in a lot of grounds to revisit this year, but due to various factors, mainly the ghastly cost of watching 4th Division football, I'd only managed three Wycombe away games so far this season, Morecambe were no exception, far from the worst offender, but they were asking an eye-watering £21. Coupled with the coach fare of £30, it was going to be an expensive day. But I decided to take the plunge anyway - it was 6 years since I had been to the Globe Arena. It would be a day away from driving too, something I was getting fed up with, what with all of my groundhopping pals being non-drivers. More trips by public transport will be my aim next season, though, with plenty of inconvenience and high prices, this will be easier said than done. Thankfully, in the week before, my Dad pre-paid for my ticket, and this was highly appreciated, what with me having plenty of expense lately. 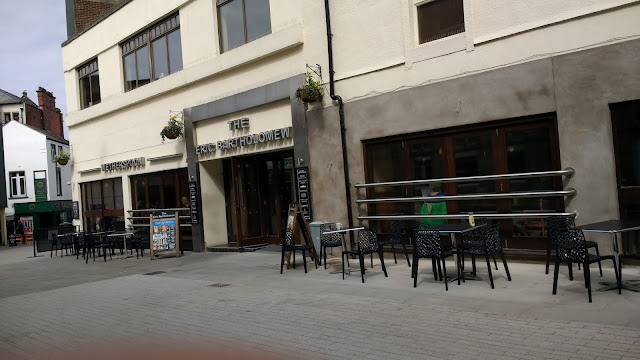 It was a busy day at work the day before and so I was glad to unwind with a few drinks in the evening. I carried on my Football Manager game and planned some pubs for the following day, knowing that we were stopping in Morecambe. On the day of the game, I woke around 6.30am, having breakfast before going down the shop to get a paper. The coach was 10 minutes late to me and my Dad's stop, but even so, we still left High Wycombe at the planned time of 8 am. It was a nice relaxed journey up, with a stop at Stafford services punctuating the trip. I texted a list of games to my fellow hoppers, pencilling in Hereford v Hereford Lads Club on Monday with Chris. The club certainly has a long and interesting history and I used the two hours before we got to Morecambe to write it all down. 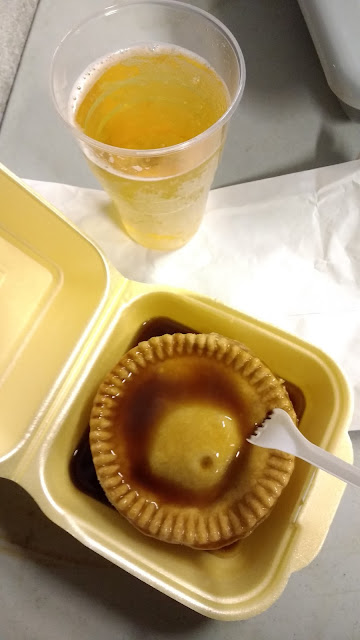 We got into Morecambe at 12.45 and while my Dad and the rest of the group went to a pub on the sea front, I went to the Eric Bartholomew, the local Wetherspoons that I had been to before. A pint of my favourite cider (Black Dragon) tasted heavenly, especially at £2.15 a pint with my CAMRA Vouchers. As it was not part of any meal deal I opted for curry sauce and chips with a generous portion costing just over £3. After that I went to meet my Dad in his pre-match pub, The Palentine. It was an expensive business, £3.80 for a pint of Strongbow Dark Fruits and I felt like I was back in Wycombe, paying over the odds for a mickey mouse cider. In the ground was not a lot better, £3.60 for a can of Strongbow and a pie for £4, although the latter was above average. On the pitch it was typical Wycombe, a lack of ambition seeing us go one down before a timely but unsuccessful late push for an equaliser. Morecambe's Kevin Ellison was derided as ever, but he would be perfect for our rough and ready term. 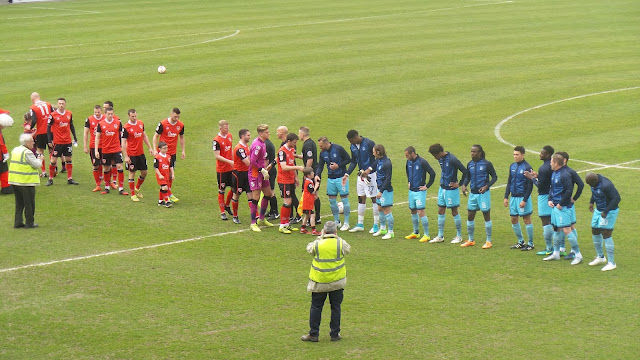 I listened to BBC 3CR on our way back with manager Gareth Ainsworth echoing my thoughts. I watched some YouTube videos after that but fell asleep thanks to the earlier boozing. It was nice to grab an hour or so sleep with me waking up at 7.20 just in time to listen to the full-time phone in with Danny Kelly on TalkSPORT. A stop at Warwick services allowed me to get some chicken and a bottle of Ribena to perk me up. We got back to Wycombe at 10, with me getting home 20 minutes later. I got through the door just as Match Of The Dau was starting. Usually, I'd be thrilled, but it was a bit of a damp squib with very few goals to see. 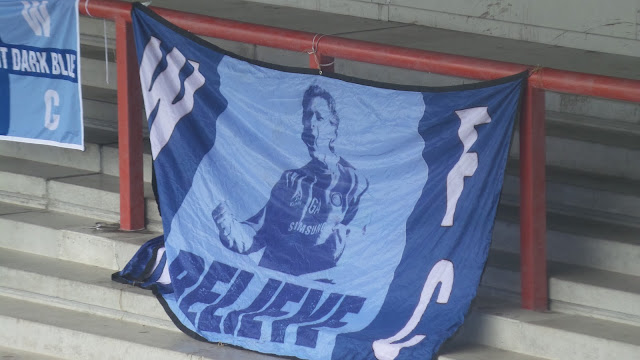 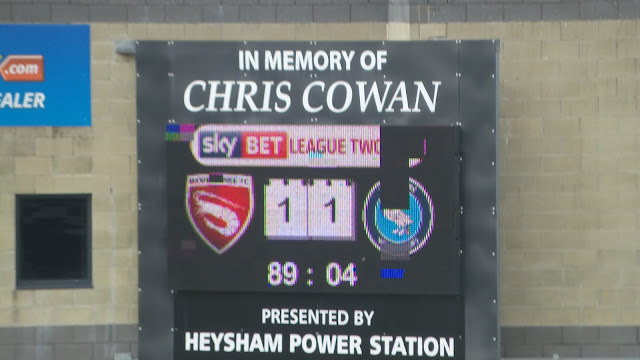 THE GLOBE ARENA as I have said is a more modern version of the previous ground. They have a big stand which is a lot nicer and modern than the one at Christie Park. Opposite that is an uncovered terrace - exactly the same as the one that was at the old ground. Behind each goal, well thought out terraces provided a great view of the action - they were set back and raised above ground level so that it really improved the view. But they were a lot smaller than the old home terrace, which was one of the biggest covered standing areas in the Football League.

The club bar is fairly smart and has big screen TV with all the latest TV games on. There's not a brilliant range of drinks here, but you won't go thirsty. I hadn't tried the tea bar prior to my latest visit but the pies are supposed to be amongst the best in the football league, so perhaps I will try one on my second visit. I visited the town, around a mile or so away from the town when staying in the town for a Lancaster City game. There wasn't a huge amount of choice, but at least there is a decent Wetherspoons there called The Eric Bartholomew, which is one of the better ones in the chain. 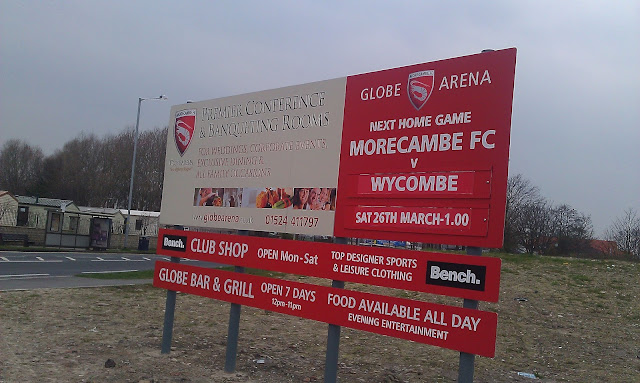 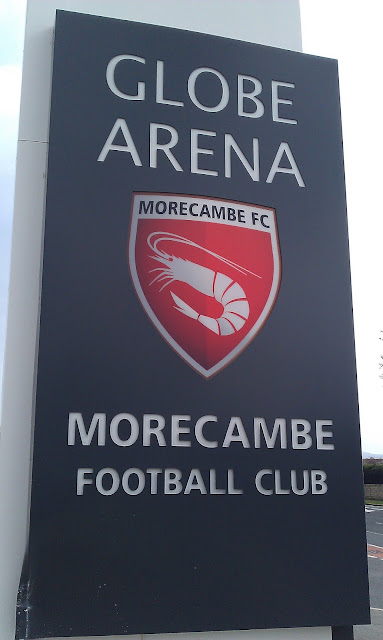 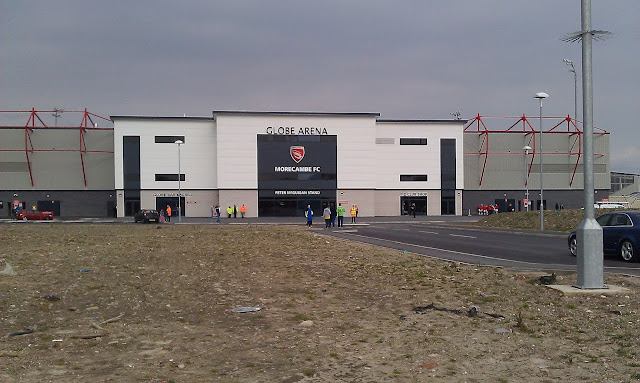 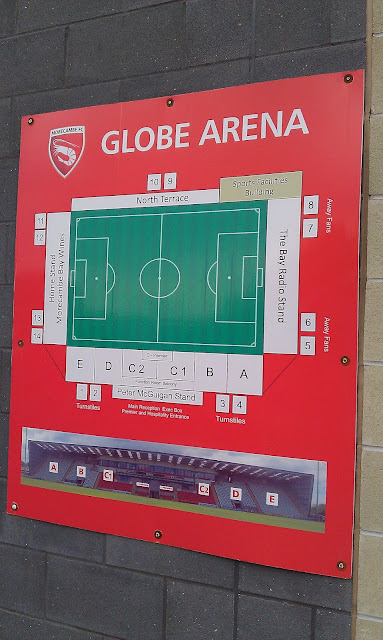 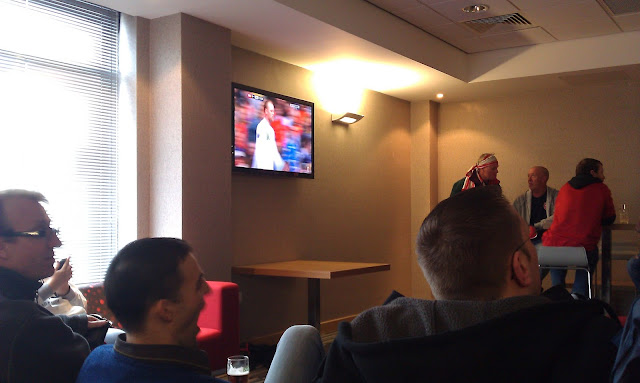 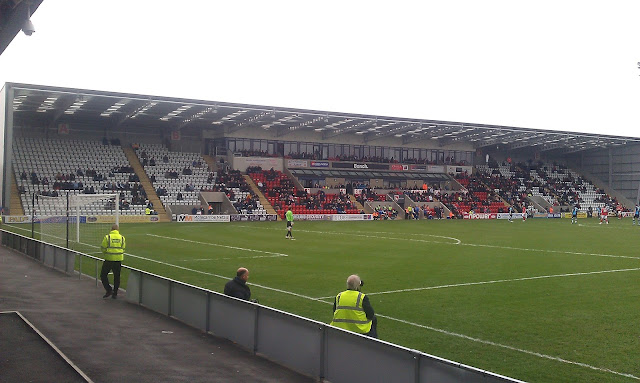 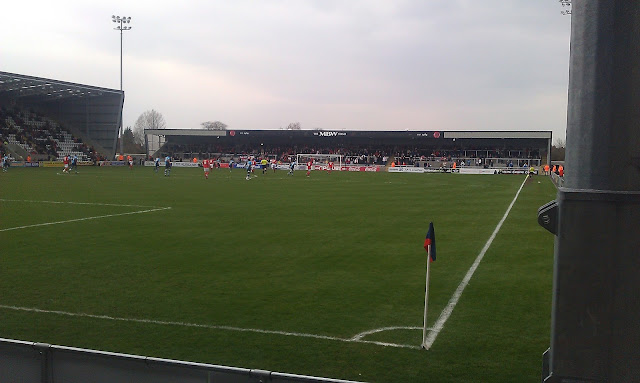 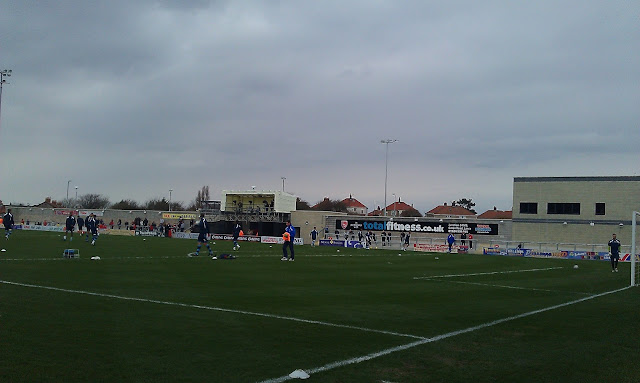 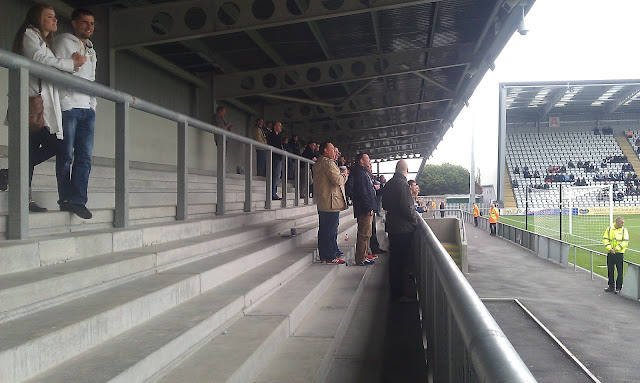 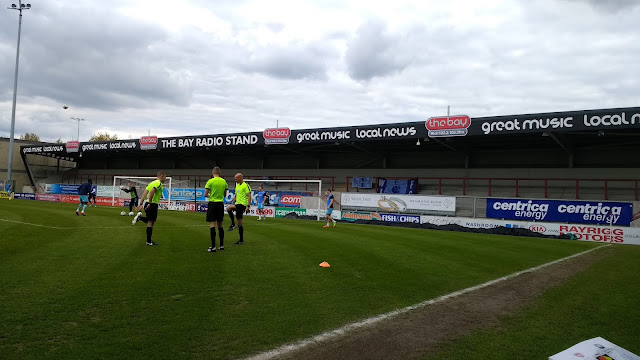