Since moving to Whittington Moor Chesterfield have had mixed results on the pitch. The opening game at the ground was a 5-4 defeat to Derby County with Craig Davies getting the first goal. They won their first game at their new home, beating Barnet 2-1. The record attendance of 10,089 came when they defeated Rotherham United 5-0 in a League Two game before going on to lift the championship in their first season at Whittington Moor. They'd only last the one season in League One, before coming straight back down after a 22nd placed finish. Chesterfield would go on to spend a further 2 seasons in League 2 before going up as champions again. 2014/15 saw their best ever league finish at their new home, although the season ended in disappointment with defeat to Preston North End in the playoff semi-finals. They followed that up with an 18th placed finish last season and the poor form has continued this season with them struggling at the foot of the table.

2014-15 also saw their best FA Cup run at the new ground when they reached the 4th Round before a 2-0 defeat to local rivals Derby County. The League Cup has not been a happy hunting ground for the Spireites with no win since way back in 2006. A trip to Wembley in 2014 saw them reach the Football League Trophy Final, however they lost 3-1 to Peterborough United. 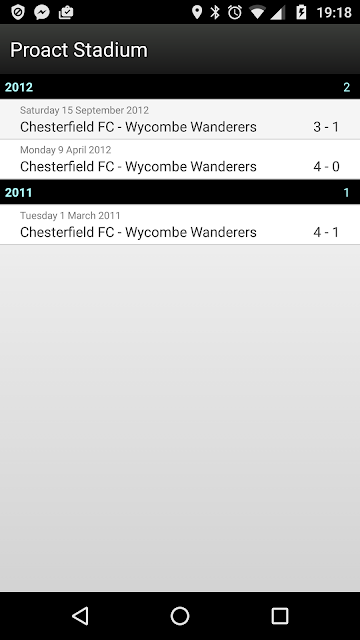 I had been looking forward to visiting Chesterfield's B2Net Stadium ever since the fixtures were announced the previous June. Firstly it was a new ground for me to tick off, and secondly I had made good friends with Ryan and Mark Watterson, who were both avid Chesterfield supporters, but more of that later. The game had originally been scheduled for the busy Christmas period, falling on the 28th December. But the day before it was called off due to heavy snow in the Derbyshire area, which resulted in a frozen pitch amongst other problems. 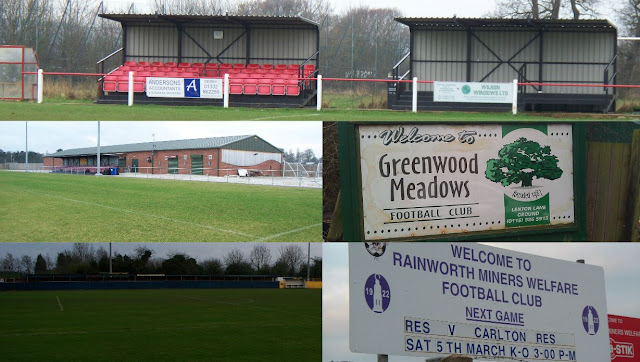 So, the match was rescheduled for a Tuesday, namely the 1st March 2011. I had a full car and we set off around 11am as we were planning on going into Nottingham city centre on the way.As well as a fair few football grounds. So after visiting:

and a couple of hours in Nottingham, we eventually got to Chesterfield at around 6PM. After texting Mark to let him know I was here, I went for a pint in the local pub, The Derby Tup. This particular establishment is listed in the CAMRA Real Ale guide and also does a nice selection of ciders too. And there are other good pubs too, think I will have to make a day of it next time! There is also an excellent selection of takeaways around the ground. For a new build this is most unusual and credit must go to Chesterfield Council for choosing an excellent location and providing a big boost to local businesses. Getting away after the game was also easy, thanks to a good road system, why oh why can't they all be like this.

So after a pint and some chips I got a reply from Mark and Ryan saying they were ready to meet. So I made my way off to the club shop as planned and shook hands with these 2 great people who I had met on Facebook. This to me, is what football is all about, meeting great people on your travels, and you couldn't wish to meet 2 nicer people. Ryan also has his own website, which you can find in my links section, and I will also provide a link to the report of this specific match at the bottom of the page. 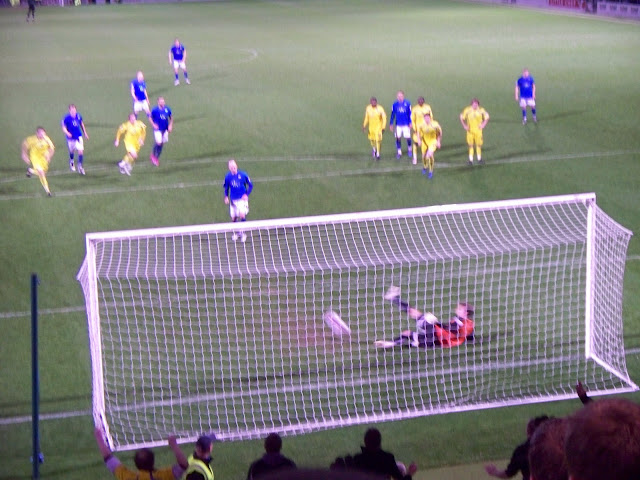 So I was in good spirits and hopeful of a good Wycombe performance as we made our way into the ground. This game was first v second, Wycombe had made good progress in the previous few weeks and sat just 3 points behind the Spireites, after clawing back a hefty lead. But how wrong I was. A crowd of over 6300 witnessed a complete mauling of Wycombe in one of our worst performances of the season. It was a miracle that it was only 2-0 at half time, the goals coming from Dean Smalley and a penalty conceded by Alan Bennett, converted by Danny Whittaker. Bennett especially had a torrid game on the night and this was the beginning of the end of his Wycombe career. The second half carried on in the same vein, Jack Lester scoring in the 46th minute. Luckily for Wycombe there were no further goals until the 80th minute, when against the run of play, Jon-Paul Pittman got a goal back for Wycombe. But it was only prolonging the agony, top scorer Craig Davies completed the rout a couple of minutes from time, 4-1 to the home side and it should have been many more in all honesty. Apart from the football it was a wonderful day, luckily Wycombe achieved their aims in the end, sealing promotion on the final day. They also helped Chesterfield along the way, beating Bury on 30th April to confirm Chesterfield's well deserved Championship win, and giving their own promotion hopes a great boost at the same time. 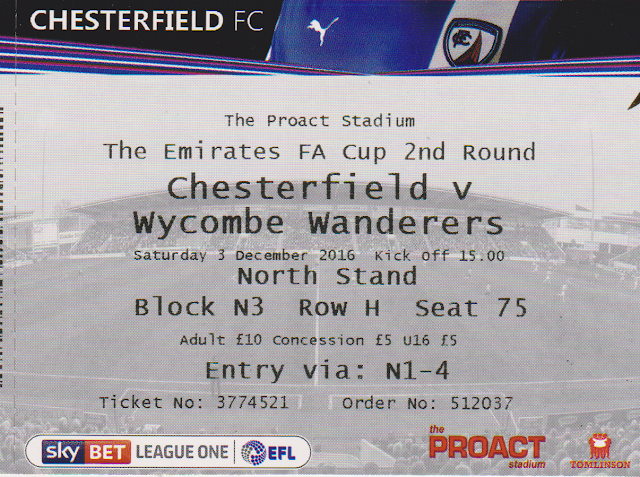 Initially I was disappointed when Wycombe were drawn away at Chesterfield in the FA Cup. We'd already overcome a tough game at Portsmouth in the previous round, and I was hoping for a smoother chance to progress to the potential money-spinner that was the third round. We had a terrible record at the Spireites new home, though on the bright side we had been in good form in recent weeks, as had Chesterfield who had been struggling at the foot of League 1. It would be also good to catch up with some Chesterfield fans that I know, and pre-match was also decent. Another bonus was the ticket prices - just £10 for me, which was way better than the following week, when we'd be down the road at Notts County. They were charging an eye-watering £24 if you paid on the day, and although I fancied a revisit there was no way I was getting ripped off, and so would do another groundhop. 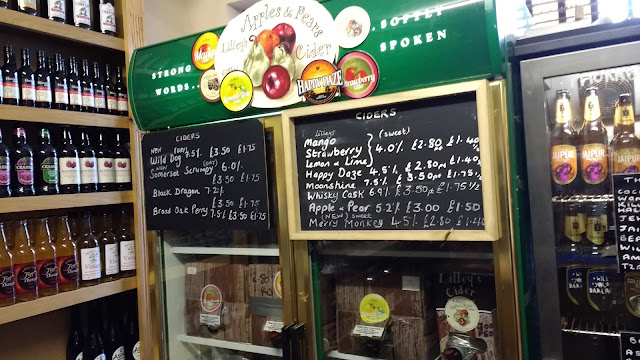 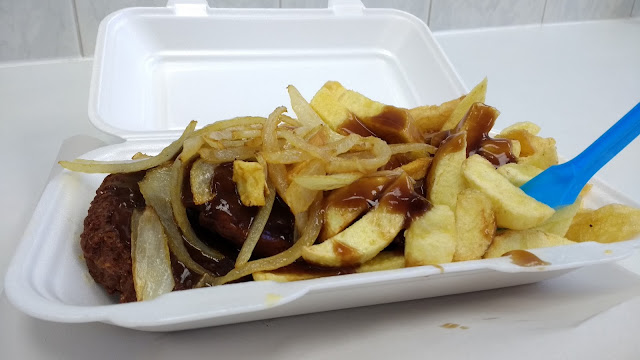 I woke at 7am on the day of the game, having a bath, getting ready and browsing the Internet before leaving at 10. I met Alex and his mates at 10 at the train station and we were soon on our way. I'd allowed extra time for traffic but thankfully there were no issues and I arrived near the ground at 12.40. The Beer Parlour had changed locations in between my visits and the larger premises allowed them to have an even better cider range. I had myself a pint of Wild Dog from Lilleys which was a cracking dry cider and helped me chill while catching up on social media. I also got a couple of pints of Somerset Scrumpy from the same brewery to take out and have later with Match Of The Day. I popped into the Derby Tup to say hello to some Wycombe fans before going to the North Sea Fish Bar for lunch. There I had double beefburgers, chips and gravy for the great price of £3. It was cracking too, and from there I made my way to the ground. A minutes silence was held pre-match for the Chapacoence players killed in a plane crash earlier in the week. The match report is below.

So then, an utterly superb day and an incredible victory for Wycombe, especially considering our previous record at that venue. I made my way back to the car abd swiutched the radio to Peak FM, which had coverage of the game. I doi love listening to local radio, where they don't bang on about the Premiership and El Classico all day. This was pure gold, as you would expect, with some exceptionally disgruntled Spireites ringing in. Sadly we lost signal half an hour into the journey, so at the request of my passengers i put the West Ham v Arsenal game on. For the second time that day, a visiting side handed out a complete tonking as the Gunners strolled to a 5-1 victory. I dropped the lads off at the station at 7.30, getting home myself 10 minutes later. It had been a wonderful day, and I celebrated it with a few ciders and Match OF The Day before going to sleep around midnight. 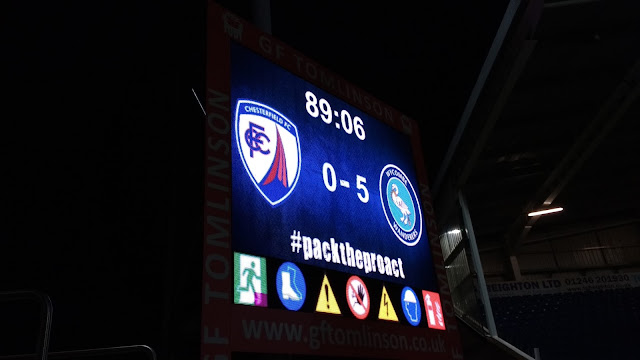 WHITTINGDON MOOR is a pretty bland ground to be honest, it's 10,000 capacity split between 4 stands of equal height and look. At least it is well built, lots of leg room and great sight lines. The club shop and tea bars at the ground are pretty much standard fare, bland products at a premium. The old ground at Saltergate had bags more character, but one thing that's not missing is the relaxed atmosphere. The home fans are really friendly and the stewards take a pretty chilled-out attitude unless you are looking for trouble.

Another bonus is the location of the ground. Many new grounds are situated in the arse end of nowhere, but this is different. The town centre it may not be, but there are a great number of places well worth spending your pre-match money. The Beer Parlour is a micro-pub which has changed locations in between my visits, but is still local to the ground 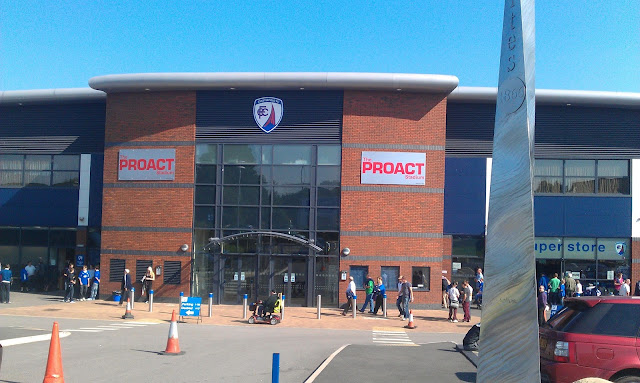 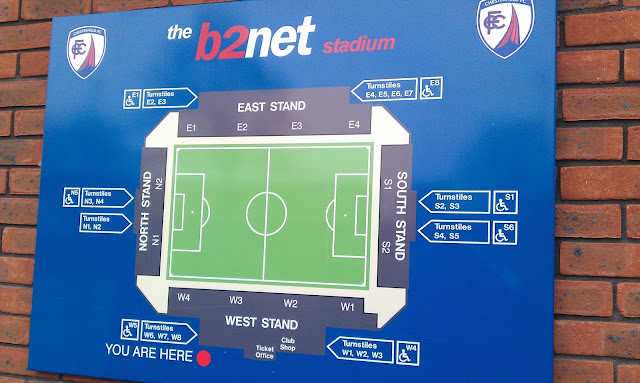 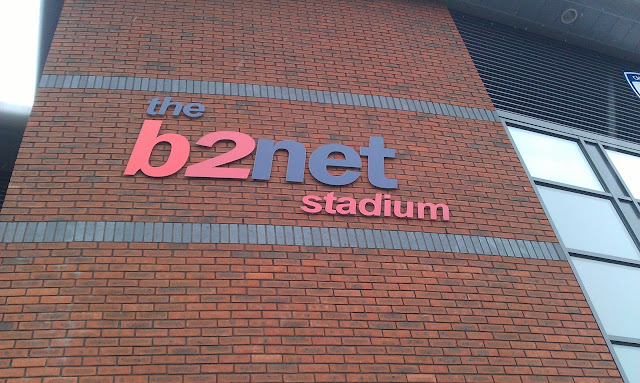 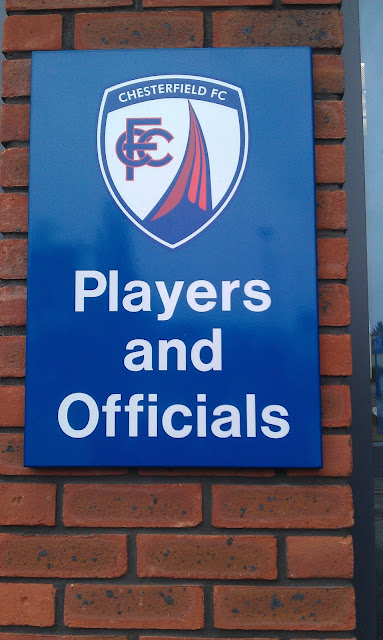 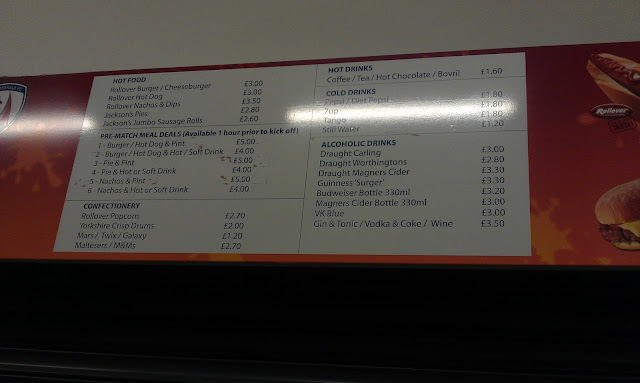 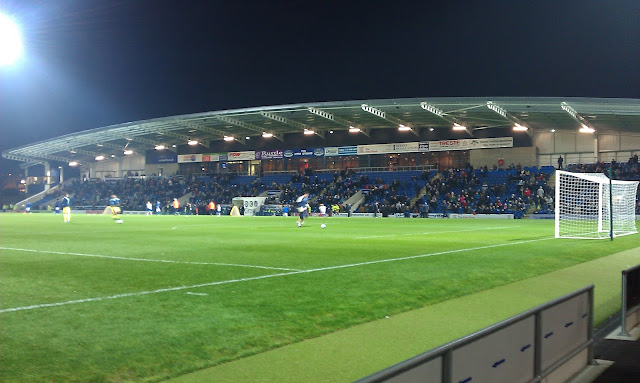 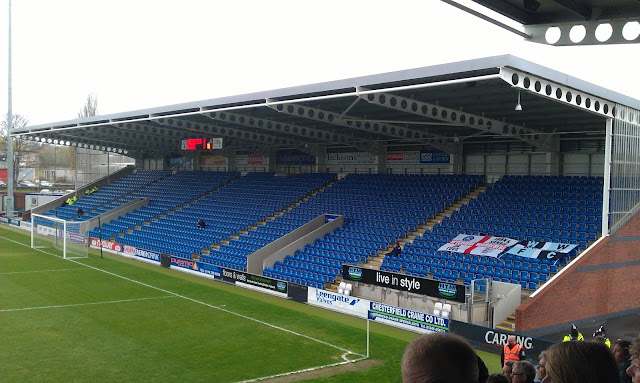 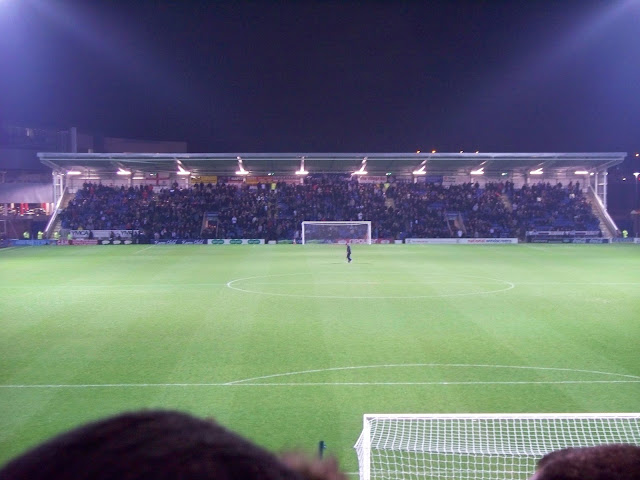 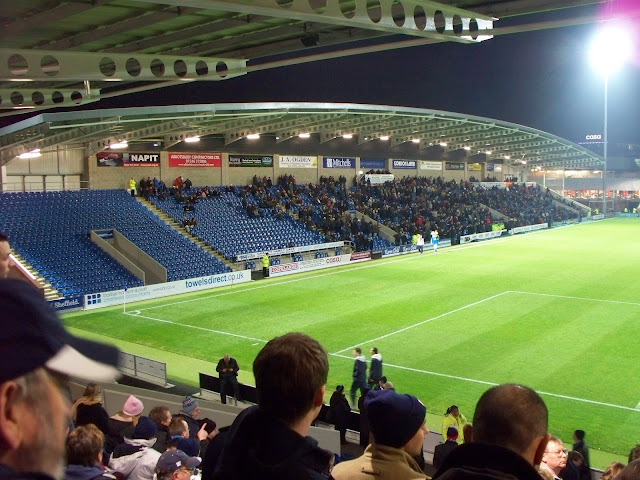