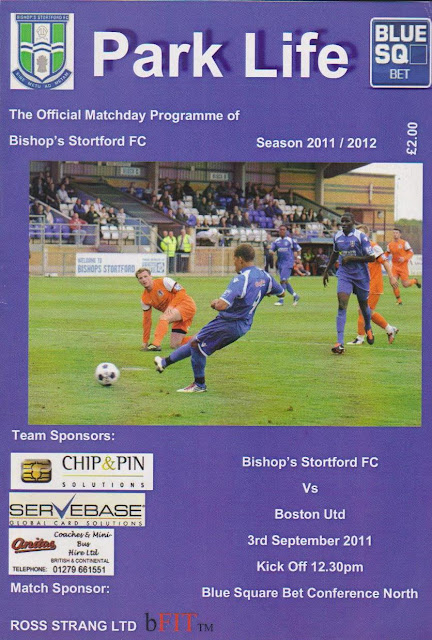 The club was formed in January 1874 at the local Chequers Hotel. After playing friendly games, Bishops Stortford played in local leagues such as the Stansted & District, Saffron Walden & District and Herts County League. After the Second World War, the club joined the Delphian League, winning it in 1955.  in 1963, Bishops Stortford joined the Athenian League. Starting in Division 2, two quick promotions were won to get to the Premier Division. The club won that itself in 1970, joining the Isthmian League a year later. They remained in the top tier for several seasons, even finishing as high as 3rd in 1974 (their best ever Isthmian League finish) , just three points behind leaders Wycombe Wanderers. Despite this, they were relegated to Division 1 in 1978. It took three seasons to recover, but Bishops Stortford won back promotion as champions in 1981. Further spells in Division 1 followed between 1992 and 1994 and 1999 and  2002, but generally, the club were Isthmian Premier mainstays. A top half finish in 2004 saw them join the newly formed Conference South, their best ever finish of 5th coming in 2007 (their best ever finish in the current league system). From 2011 until 2013, Bishops Stortford were moved to the Conference North due to the lack of Northern-based teams at step 2. After years of lowly finishes, they were relegated to the Southern Premier at the end of last season, finishing 18th this season. 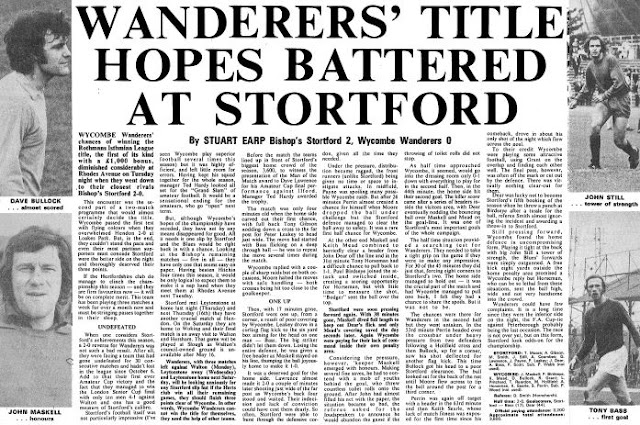 The club's best progress in the FA Cup came during the 1982/83 season. Starting in the 4th Qualifying Round, they defeated Harlow Town 4-0 after a replay. They were drawn away at Reading in the 1st Round and thanks to their first-ever win over Football League opposition, they were paired with fellow non-league side Slough Town. A 4-1 win away from home was enough to earn them a 3rd Round tie against Middlesbrough. A credible 2-2 draw at Ayresome Park saw them earn a home replay before a narrow 1-0 defeat. Bishops Stortford were the winners of the last ever FA Amateur Cup, beating Ilford 4-1 at Wembley Stadium in 1974. In the replacement competition, the FA Trophy, the club won that too, beating Sutton United 1-0 at Wembley in 1981. Locally, the club has enjoyed plenty of success in the Herts Senior Cup, winning it on twelve occasions. 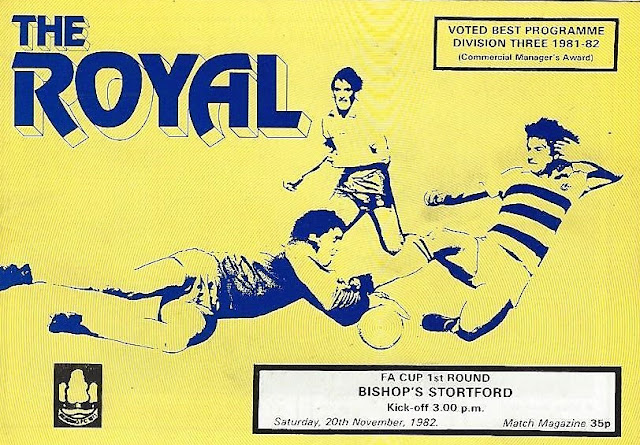 As part of Non-League Day, Bishops Stortford were kicking off at 12.30 PM, giving those who wanted to to do 2 or even 3 games in one day. As well as the various 3PM kickoffs, there was also a 3.30PM at Chelmsford and an evening kick-off at 7PM for Braintree v Lincoln. As I'd always fancied going to Woodside Park for a game, having been fairly impressed when I went to the ground to take photos on the way to Norwich v Wycombe in 2009. So this was an ideal opportunity to do so. I'd already done Braintree for a pre-season friendly against Wycombe, so I decided to double this game up with an FA Cup one. These days, I'd have gone for something a bit further away, but on that day, I opted to see a game a little nearer home, going to Cheshunt v Southend Manor after. To make it even more worthwhile I combined it with a trip to Bovingdon Market and Hemel Hempstead, not that I bought much. I eventually got to the ground at around 12.10, the M25, surprisingly, not playing up today. 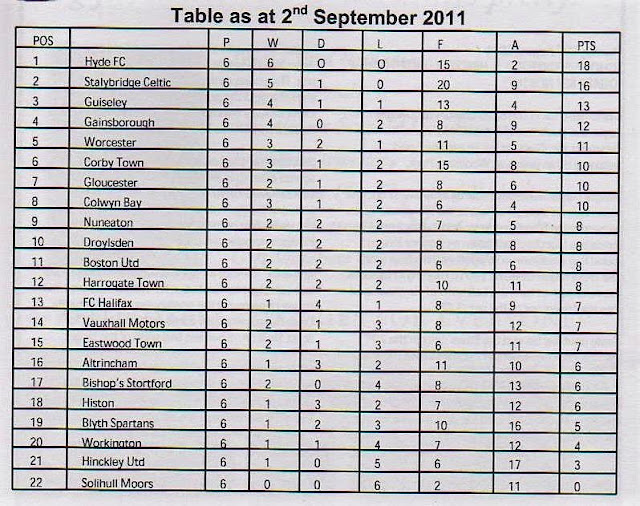 After paying my £12 to get in (plus £1 to park) I went and had a look in the club shop. The prices were pretty high -  small pennants were £6 and all the other stuff seemed expensive too, so I wasn't buying. Interestingly, the tie saw ex-Premier League footballers Jason Lee of Nottingham Forest and ex-Spurs goalkeeper Ian Walker face each other in management for the first time. Looking back at the teams now, Bishops Stortford had a notable name in their lineup - future Premiership striker Dwight Gayle, who these days plays for Newcastle United. They also had former Wycombe youth player Scott Shulton, currently playing for Hemel Hempstead Town. Notable names for Boston United including the then veteran keeper Paul Bastock who has only finished playing. They also had former Peterborough United defenders Gareth Jelleyman and Ryan Semple. 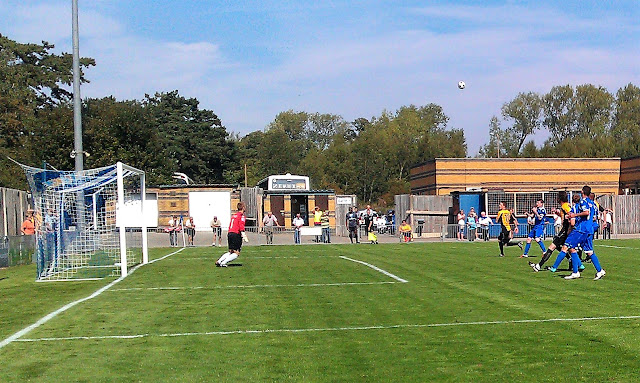 Neither side had enjoyed a great start to the season. Boston United were sitting bang in mid-table whilst Bishop's Stortford had only just climbed out of the relegation zone, thanks to a 5-0 win over fellow strugglersHinckley United. It was a pretty poor game and going into injury time it was goalless with the hosts down to ten men, Phil Anderson being sent off for lashing out at Ryan Semple. Six minutes into added time, Ben Milnes floated a free kick into the box, Alan White nodded down and Marc Newsham shot on the turn to send the visiting fans into raptures. Boston fans were brilliant to be fair, Bishops Stortford fans didn't sing once, and seemed more intent on calling their players lazy and rubbish, which given the game, wasn't completely unfair. 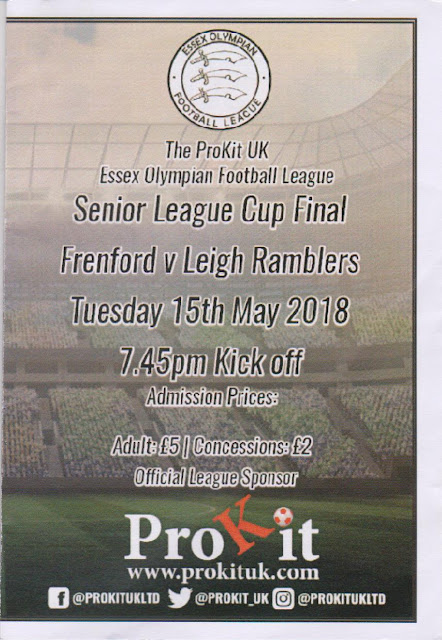 Though it was approaching the very end of the season, there was still a decent amount of options, six in all. Once I'd presented fellow hopper Anwar with the list of options, he said he wanted to keep the costs down, so I chose the nearest one, namely the Essex Olympian League Cup Final, being played at Bishops Stortford. Though I'd been there fairly recently, back in 2011, it was still one that I wanted to update my blog on. I did my research for the blog, including the club history and also earmarked some places for dinner. I'd had a great nights sleep on the day before the game, which was most welcome. After getting ready and dressed, I walked down Morrisons, getting a Chicken Burrito for lunch amongst other things before getting a lift back with my Dad. The afternoon was spent looking for information on tonight's game. There was absolutely nothing about it on the Bishop Stortford site or Twitter, neither the Essex Olympian site or Twitter and so details about admission prices were a mystery. I left home at 4.45, picking Anwar up half an hour later. There was a delay getting out of Aylesbury, then delays on the ever unreliable M25, adding around 40 minutes to the journey. As such, plans to stop in town were scrapped and we had to make do with services. I searched for the least rip off meal that I could find, having a KFC snack box for £4. It was ok, but nothing special. 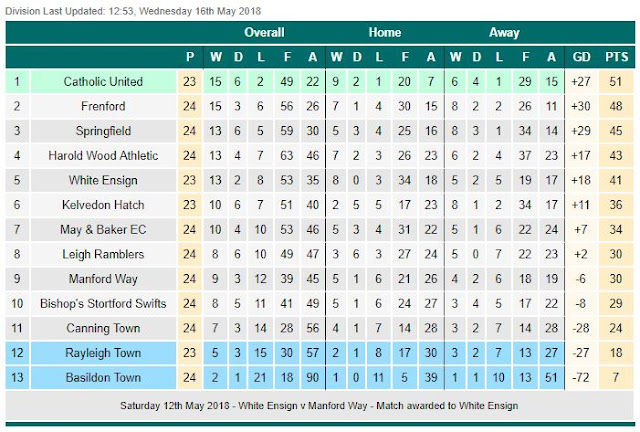 We got to the ground at 7.25, paying a very reasonable £5 to get in, which included a decent programme. Both sides had entered this seasons competition in the 2nd Round. Frenford started with an exciting 5-4 win at Buckhurst Hill before the goals continued to flow with a 5-0 win over Benfleet. Another thriller in the Quarter Final saw them beat White Ensign 4-3. The semi-final saw them given a bye as Newham United couldn't fulfil the fixture for whatever reason. Leigh Ramblers beat A1 Sports 4-2, Westhamians 2-1, Bishops Stortford Swifts 2-1 and Kelvedon Hatch 2-0 to reach tonight's final. In the Essex Olympian Premier Division, Frenford had finished 2nd on 48 points, three behind Catholic United whilst Leigh Ramblers had finished 8th with 30 points. Frenford also held the upper hand in this season's league clashes, winning 3-1 at home before sharing the points in a 2-2 draw at Leigh. Frenford had also won this cup twice before, most recently in 2013 when they defeated Aldborough Athletic 2-0 in the final. 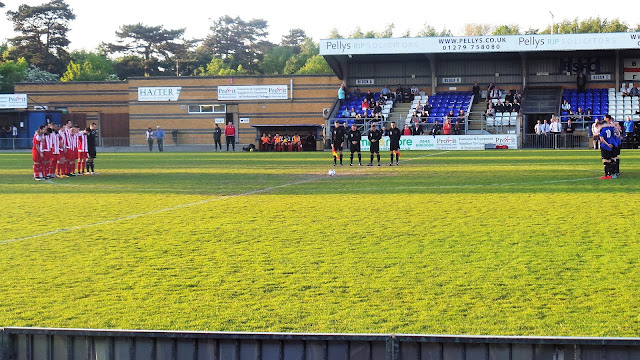 Though they were the outsiders, Leigh Ramblers roared into a two-goal lead within the opening minute or so. Firstly Tom Hollingsworth blasted into the roof of the net from close range after Frenford failed to clear their lines. Then thirty seconds after, Andy Webster shot into the top right-hand corner as he shot on the turn from the edge of the area. Leigh Ramblers went on to dominate the opening 25 minutes, but at that point, Frenford pulled a goal back against the run of play. Charlie Fairhead's precise diagonal shot into the bottom right-hand corner reducing the arrears. The equaliser came on 55 minutes, Ashley Taylor-Forbes finding the top left-hand corner from the edge of the area. It was a bad error from the Leigh Ramblers keeper that gave Frenford the lead on 62 minutes, Taylor-Forbes getting his second after the glovesman failed to make proper contact when clearing the ball and had it pinched off of his toes. His team tried in vain to push for an equaliser, coming close on a few occasions. But the game was put to bed in injury time, Nick Hughes firing a close-range shot into the roof of the net after a chance on the break. 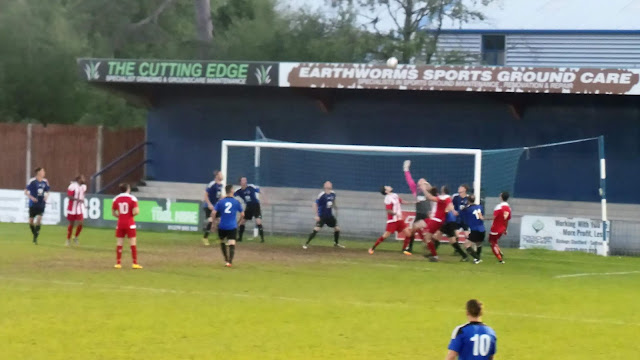 The game was over by 9.35 and we got off pretty quickly, leaving at 9.35. We put TalkSPORT on until Andy Goldstein came on, switching to music at 10. It was a decent journey home and I dropped Anwar off home at 10:35. I've had trouble with wildlife running out in front of me and damaging my car in the past and they were out in force again tonight. Luckily, they were on stretches of road where I was able to put my full beams on, so any crisis was averted. It still took me to come to a complete stop and toot my horn at a deer for it to move off of the road, mind. I got in at 11, but couldn't get to sleep, thanks to getting loads earlier in the day.  I didn't drop off until 1 am, meaning I was tired for the next morning. Next game for me will probably be another trip to Hertfordshire, to see Buntingford Town v FC Lemsford on Saturday, though I'm considering some Friday options. 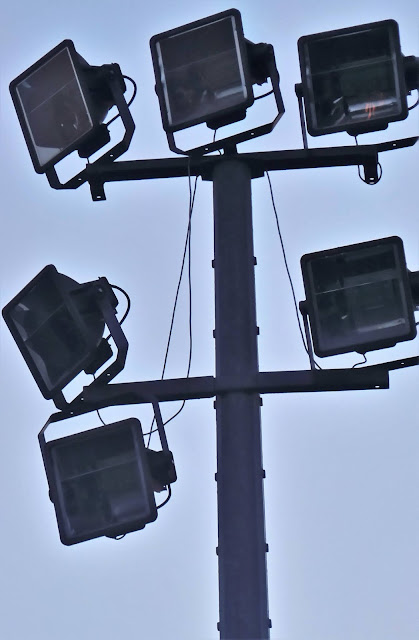 Woodside Park is a smart, modern ground, the club having moved there in 1999 after a period of groundsharing following the sale of their former home, the Town Ground. The biggest area of the ground is the 300 capacity main stand, smart and decked out in blue and white seats, this also houses the bar area and dressing rooms. In addition, a small metal seated stand holding around 225 was added to comply with step 2 ground grading, this is on the other side of the ground. The two ends - one named the Airport End (for its proximity to Stansted Airport) and the Town End have small covered terraces. The rest of the ground is open.

There is a bar and a tea bar at the ground, but I don't remember much about them. There is a car park at the ground, but they charge £2 to park, though it may be your only choice as there are lots of yellow lines around, though you may get lucky on the local industrial estate. There is a 'Welcome Break' services opposite the ground, whilst the town is two miles away. 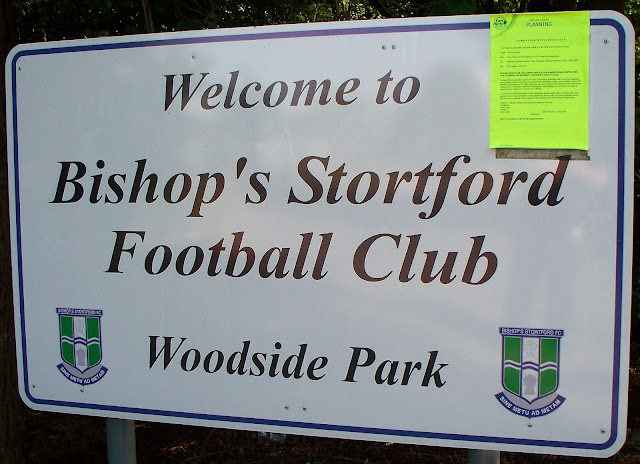 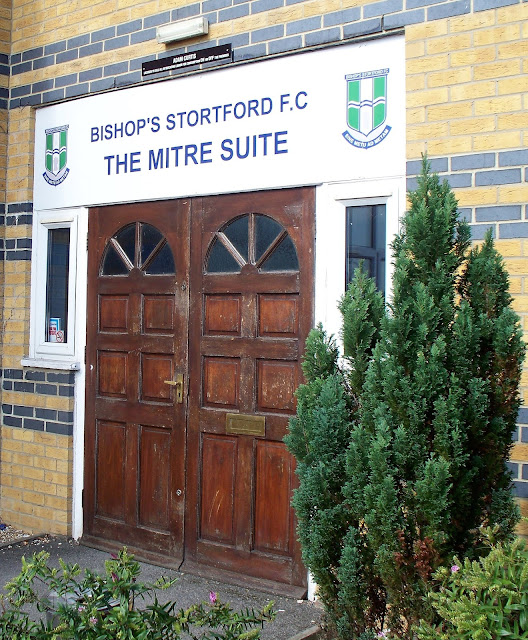 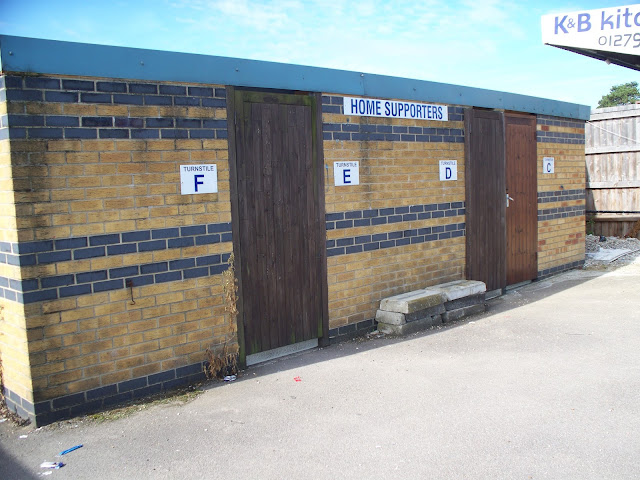 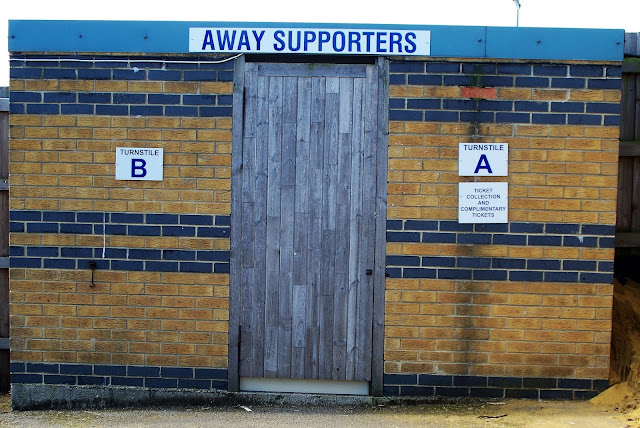 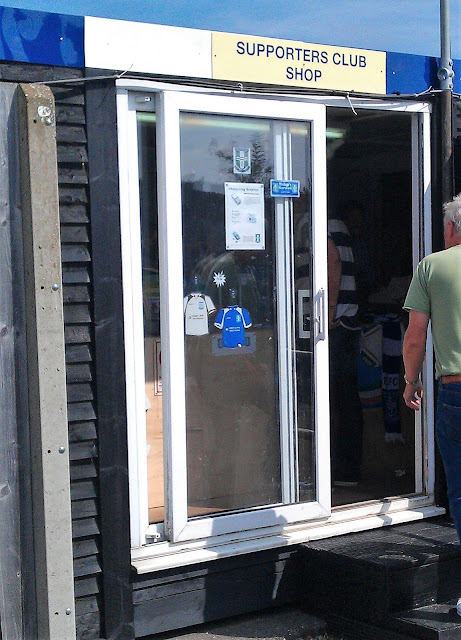 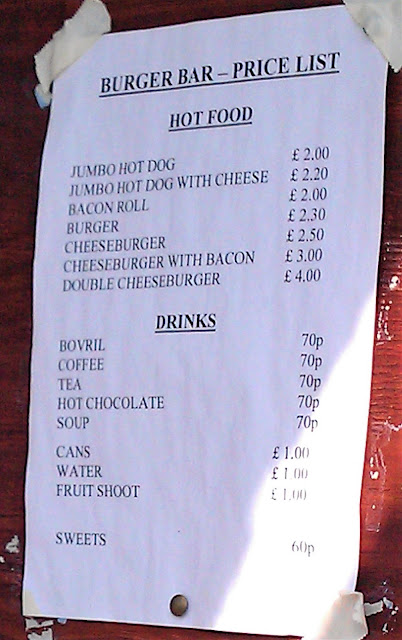 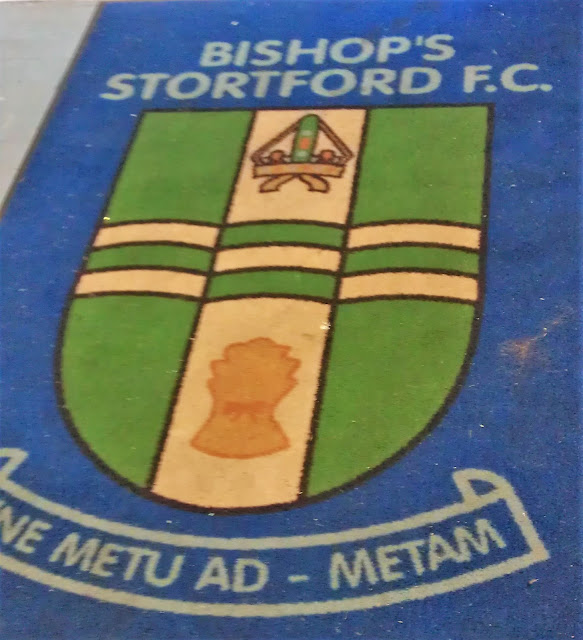 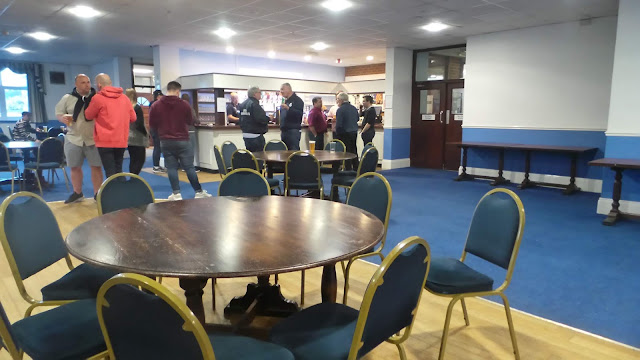 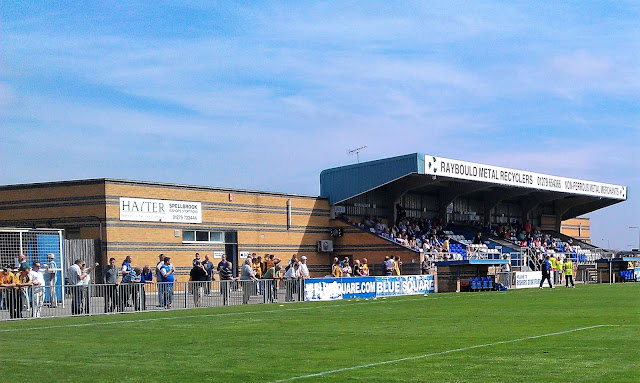 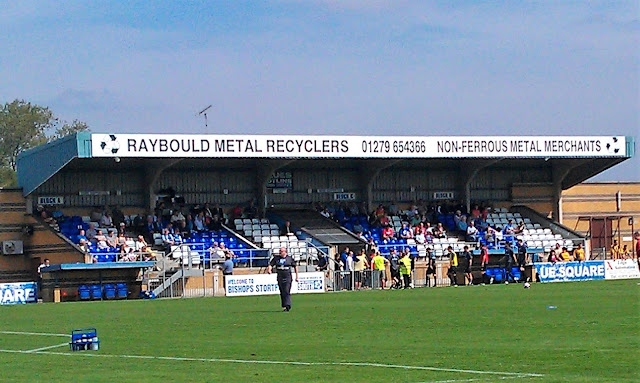 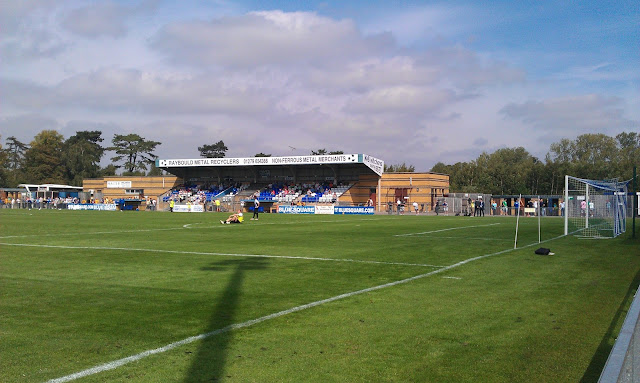 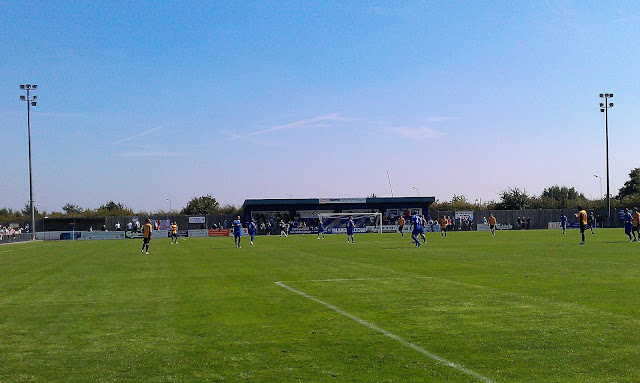 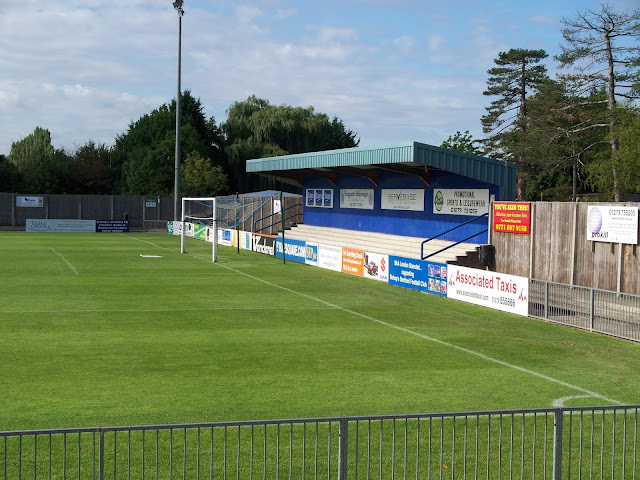 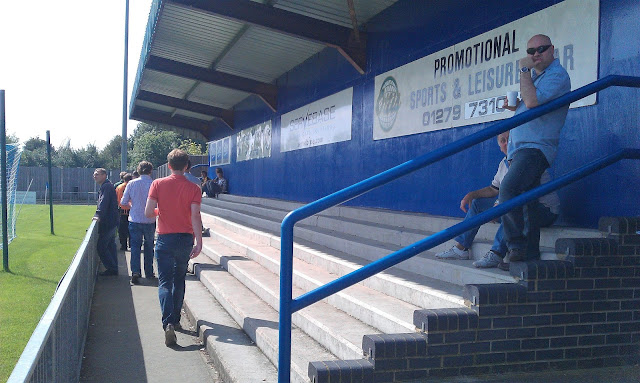 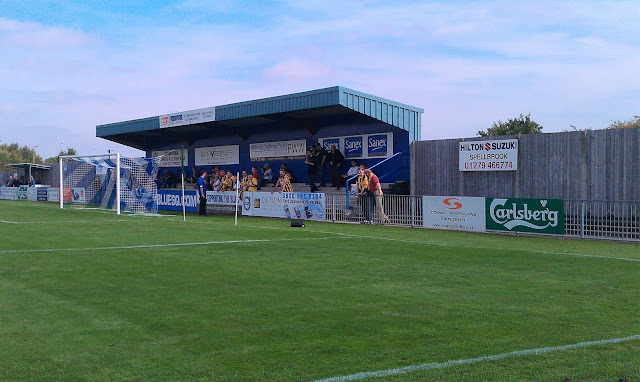 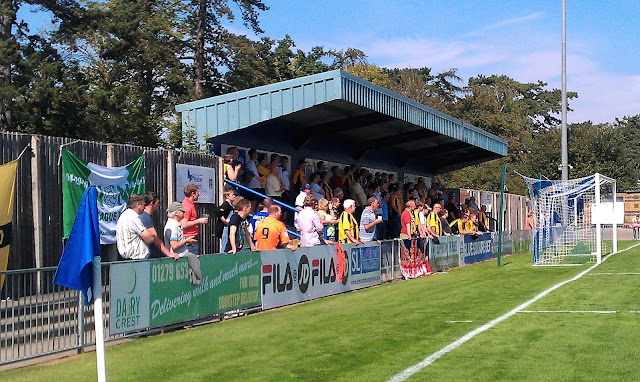 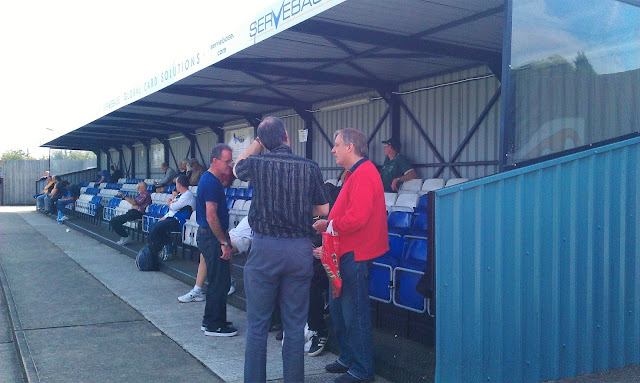