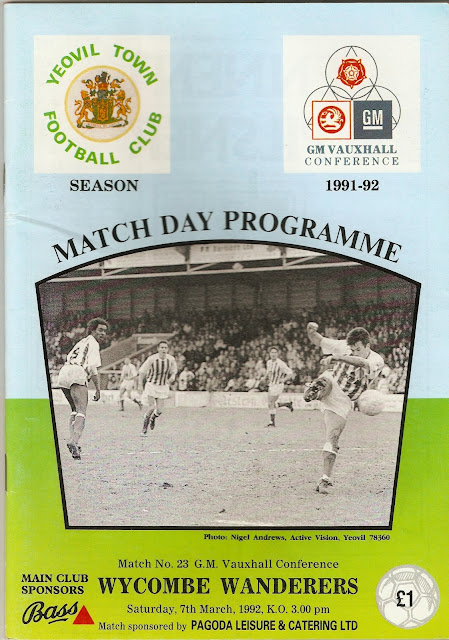 The club was formed way back in 1890 and went by a number of names in their formative years including Yeovil, Yeovil Casuals and Yeovil & Petters United before settling on their current name in 1946. They started out in local leagues until 1922 when they had a strange setup of playing in both the Southern & Western Leagues. This continued until the resumption of football after the war when they would play exclusively in the Southern League.  They'd remain in the leagues top tier for the entirety of their stay, winning the title on three occasions. The formation of the Alliance League (later to become the Conference) saw Yeovil make the step up from regional football. Aside from two spells where the club dropped down to the Isthmian Premier for a few seasons, they'd remain here until they became Conference champions in 2003. Promoted to the Football League, Yeovil would win promotion to League 1 a couple of years later. As if eight solid seasons in the third tier was not enough, the last of those seasons saw Yeovil Town finish 4th and then progress past Sheffield United and Brentford to progress to the promised land of the Championship. The dream didn't last longer than one season after a rock bottom finish, but it was still a remarkable achievement. The struggle continued and a second consecutive relegation saw the club return to League 2 in 2015. The form has not improved much, with lowly finishes, but for now, at least, Yeovil Town retain their Football League status. 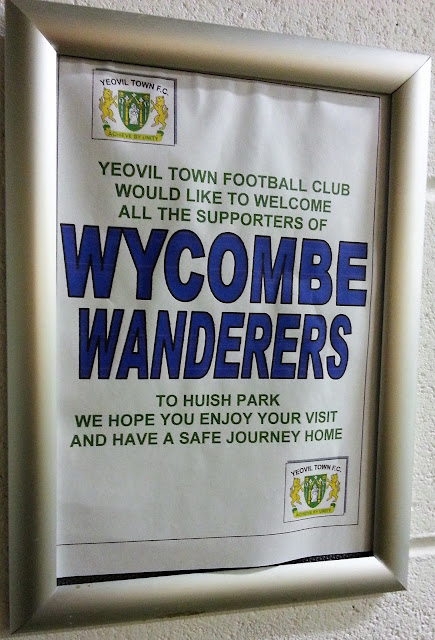 As a non-league club, Yeovil were renowned FA Cup giant-killers. Their best run came back in the 1948/49 season. They started off with a 3-2 win at Lovells Athletic in the 4th Qualifying Round before beating both Romford and Weymouth by 4-0 scorelines in the 1st & 2nd Round. Bury, who awaited them in the 3rd Round were in the second tier at the time, but that didn't stop Yeovil winning 3-1 after extra time. They faced 1st Division side Sunderland who would go on to finish third the following season, but this didn't stop Yeovil sending them packing 2-1 thanks to goals from Eric Bryant and player-manager Alec Stock who would go on to have a highly successful career as manager of QPR and Fulham, being referenced as 'that softly spoken tiger' in the latter's 1975 FA Cup Final song 'Viva El Fulham'. Though Yeovil have not had as much success in the League Cup, they did win the FA Trophy in 2002, beating Stevenage Borough 2-0 at Villa Park. The club has also reached the Southern Area semi-final of the Football League Trophy twice. In terms of local competitions, Yeovil Town have won the Somerset Premier Cup a record 23 times, though not since 2005 as it has slipped down their list of priorities since joining the Football League. 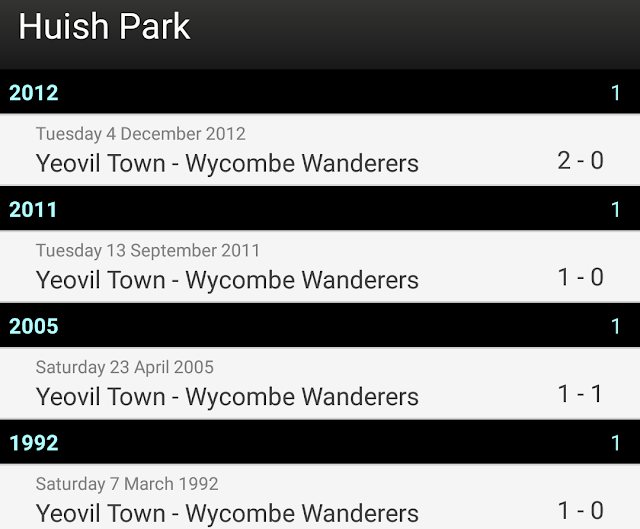 My first Wycombe away game and second ground overall was at Huish Park, home of Wycombe's 1980's rivals Yeovil Town. Wycombe were challenging with Colchester United for the Conference title, which would end up with both teams finishing deadlocked on 94 points from 42 games, but Colchester ultimately prevailing on goal difference. Despite Yeovil being on a recent run of decent form, they were near the bottom of the table and so Wycombe were strong favourites for the win. But the hosts were looking for revenge with Wycombe having recently having knocked them out of the Bob Lord Trophy (Conference League Cup) and also having been beaten 1-0 at Adams Park in the return game in August. I stayed down with family in Somerset and was hopeful of a win. However, I was left disappointed, as, despite a bright start, Wycombe went down 1-0 as you can see from the match report below. 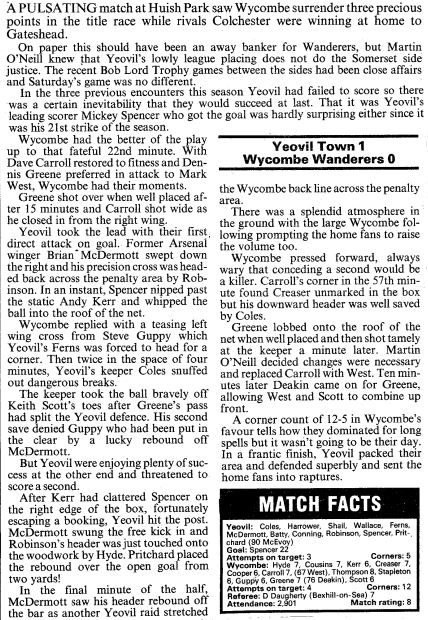 Subsequent visits proved little better with our next visit yielding our only point and only goal during my four visits, amking it surely one of the least happy hunting grounds whilst supporting Wycombe. I can't recall much about any of these visits aside from my mate Burford's hunt for a gingerbread man at a local bakery. Sadly for him, it proved as fruitless as Wycombe's search for a victory down in Somerset. 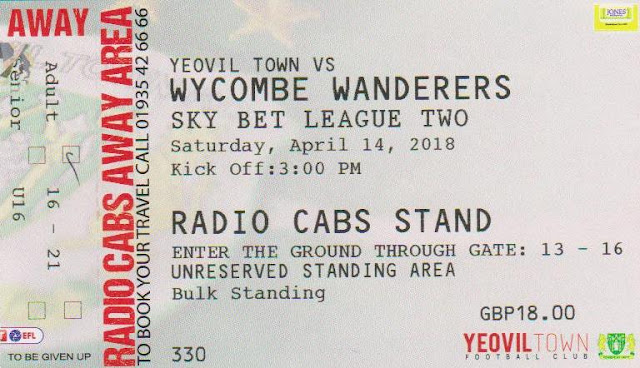 As with most of the other Wycombe away games, I was trying to target grounds that I had not been to for a while. Yeovil one of these, with my last visit coming in 2012. So as far back as June, I'd pencilled this in, hoping to go on the Independent Supporters Club coach which would hopefully stop at a decent pub. Normally my parents would be coming but they had opted to go and watch Shappi Khorsandi at the theatre instead. I'd had a couple of football free days leading up to the game, though on Thursday I wouldn't have minded a revisit to Kings Langley but didn't have the funds with a couple of expensive Wycombe away games coming up.  The day before, I found out what pub we were stopping at - The Great Lydd on the outskirts of Yeovil. It was a bit of a mixed bag - the menu had some decent looking burgers at mid-range prices, but there was no real cider listed. It was also too far from the town to make a visit viable to the local Wetherspoons which was understandable with them needing somewhere to put the coach.  As it turned out, I needn’t have worried. I emailed the pub and they got back to me with what they had on offer. There were a couple that I’d not had before, so that was me happy. I had a few drinks at home the night before and had got to sleep fairly late after listening to the Two Mikes on TalkSPORT in bed. 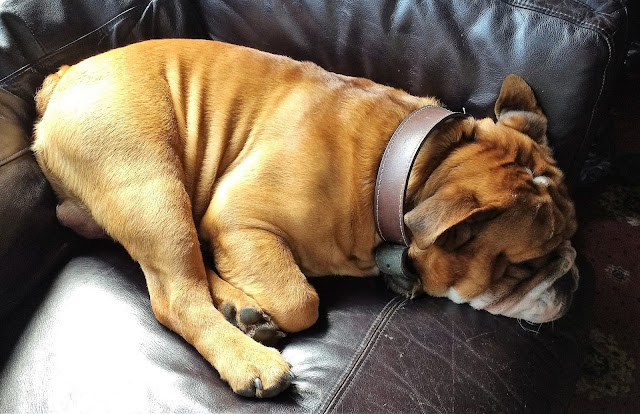 On the day of the game, I annoyingly woke at my usual work time and couldn’t get back to sleep. I wasted a couple of hours watching TV and having breakfast before getting ready. At 8.20 I left home, getting a Daily Star on the way. I got the coach on time and after a couple of pickups, we were on our way.  I found out about the pub on Tuesday for the Lincoln game - an Ember Inns place in North Hykeham. Though the food looked good, the cider selection looked dire, the fact that they were ‘proud to serve Old Mout cider’ which is an alchopop and a rubbish one at that summed up their offerings. I will look into the possibility of getting a bus into Lincoln which has a number of great pubs, luckily the ground is walkable from the town so I can meet up there. Back to today, I was stuck between a couple of choices, but in the end, I went for the buffalo burger as I like to try exotic meats when I can. The coach fare was a reasonable £18 and I had a couple of goes on sweepstake, pulling out Yeovil 4-0 Wycombe and Yeovil 0-3 Wycombe. I passed the time by picking some horses for the Grand National - Saints Are, Shantou Flyer, Vieux Lion Rouge and DelusionsOfGrandeur were picked for £15 of each way bets as 188 Bet were paying down to 8th place. The rest of the journey was spent looking at potential fixtures for the rest of the season. 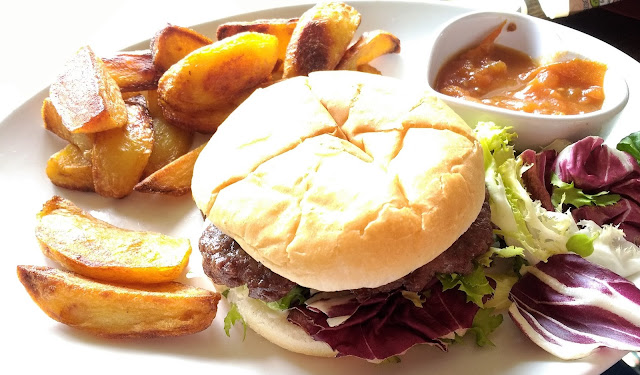 We got to the pub at 11.45 and were greeted by a friendly bulldog called Chester. They weren't serving though as no one had brought the cash float down for the till. Eventually, they took payment by card and half an hour after entering, I had a nice pint of Orchard Haze in my possession. Meal service was slow too, the first one coming out after an hour and 20 minutes. I finally got mine 10 minutes after and it was OK but the portion sizes were fairly tight. I also had a second new cider, Applebee and also a retry of First Press to complete the Orchard Press set. We left the pub at 2.15 and got to the ground at 2.30. I had a walk around the ground and checked out the programme shop. There was nothing in there that I fancied, so I went in the ground. I met up with Anwar and had a good chat. What followed was a dismal and insipid game and a half baked performance. Luckily though, Nathan Tyson came on and changed things and we got a winner ten minutes from time by Randell Williams. 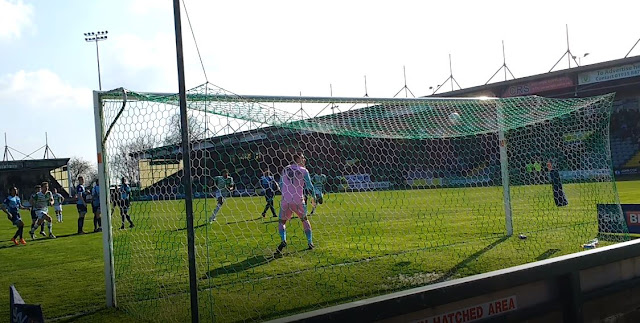 So, an uninspiring game but a 1-0 win. I tuned into BBC Three Counties and listened to them whine about Milton Keynes losing. Later I listened to the Wycombe report. It was our first shot on target that won the game, but I’ll take it. The journey home was a hot one as Spring finally showed up after an elongated winter. It dragged too with various podcasts and football phone ins not really taking the edge off of it. I found out the reason for the sweltering conditions was not a heatwave but the heating being on full blast without the driver being able to turn it off. There was also a problem with the gearbox which explained the slow progress. It turned out the driver was stuck in 4th gear. He needed great luck to make it up the hill, what with all the traffic lights. In the end, he made it fine and I got hoome at 9 pm, cracking open a cider to celebrate the win. I caught up on my YouTube subs before Match Of The Day, after which I went to bed. I'd not really enjoyed my day that much - the food had been mediocre and the game was dire. Nothing against Yeovil, but I'm glad that I won't have to go back there for some time and wished I'd not bothered today. 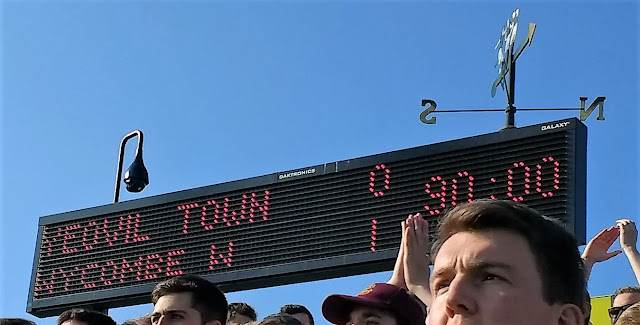 HUISH PARK is a smart modern ground. Opening around the same time as Wycombe's Adams Park, it consisted of a decent size seated stand down each side, both holding 2500. And at each end, terraces, capacity 2,000. A roof was added to the home end in the early 2000's but the away end remains open to the elements. Overall, it's a nice friendly club and a good day out, despite its isolated location.

The tea bar at the ground is your standard dull football fare at the usual inflated prices. And there is a fairly standard club shop selling the usual. Slightly better is an outside bar, this does Thatchers Gold which is OK, but I'd prefer a proper cider. The real stand out facility is the programme shop, run by the supporters club. This is an absolutely fantastic place and offers a huge range of programmes, books and other reading material, all at fair prices. 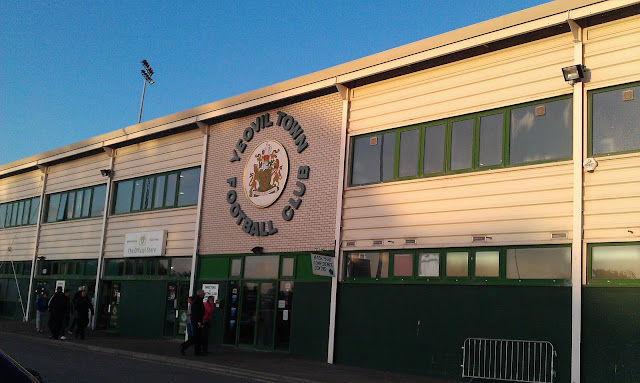 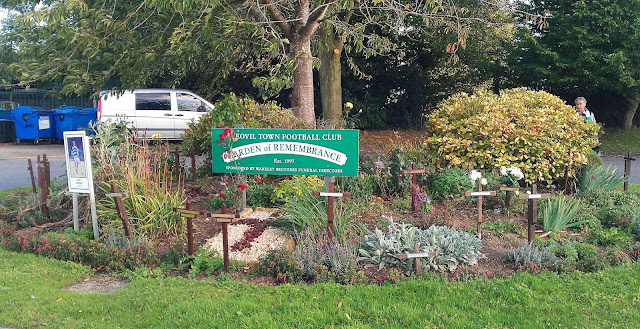 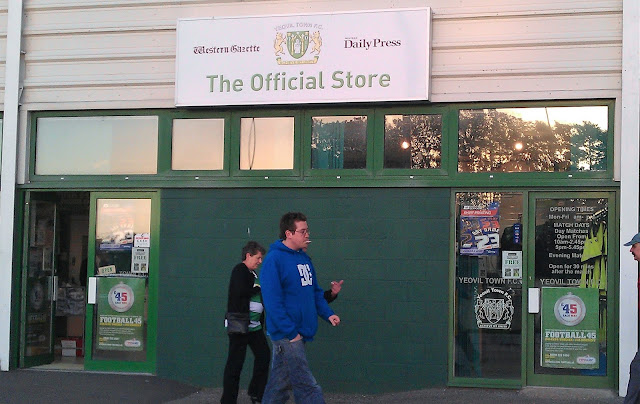 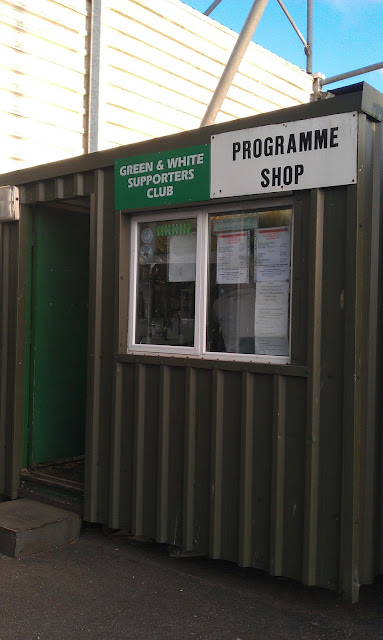 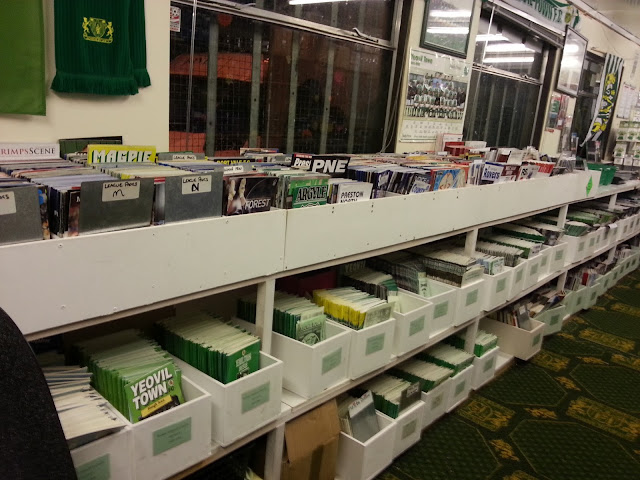 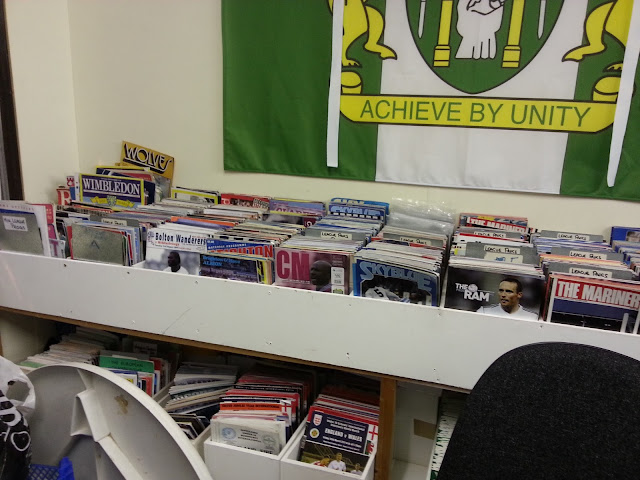 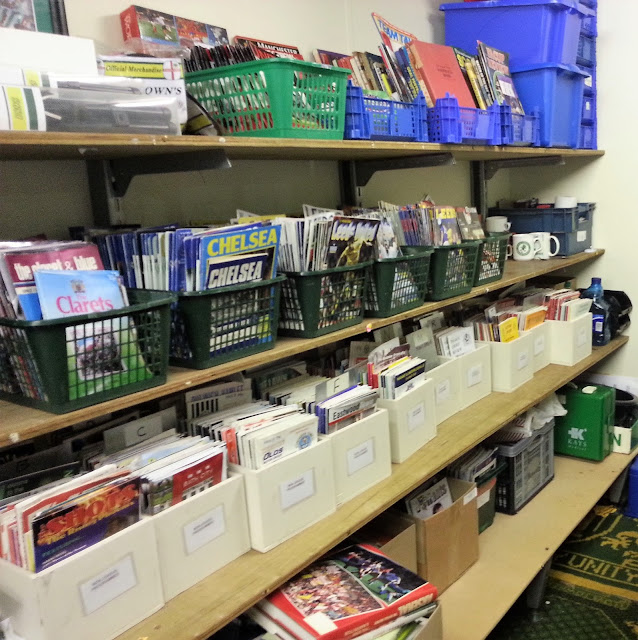 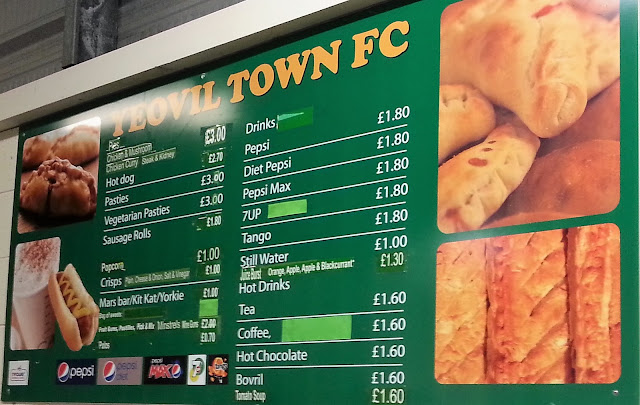 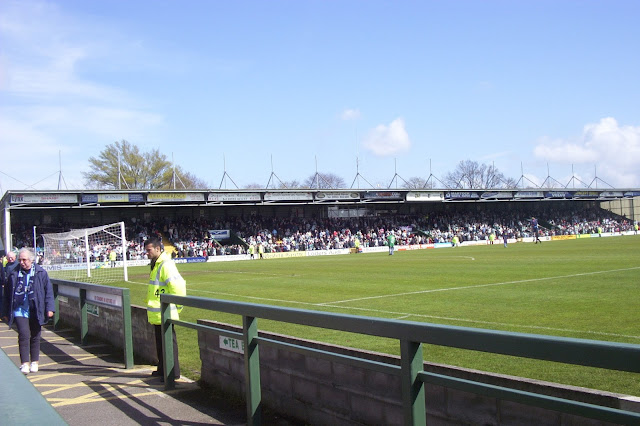 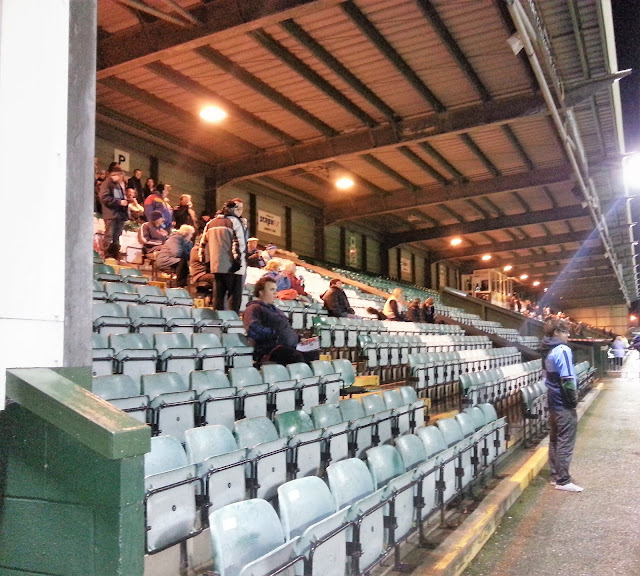 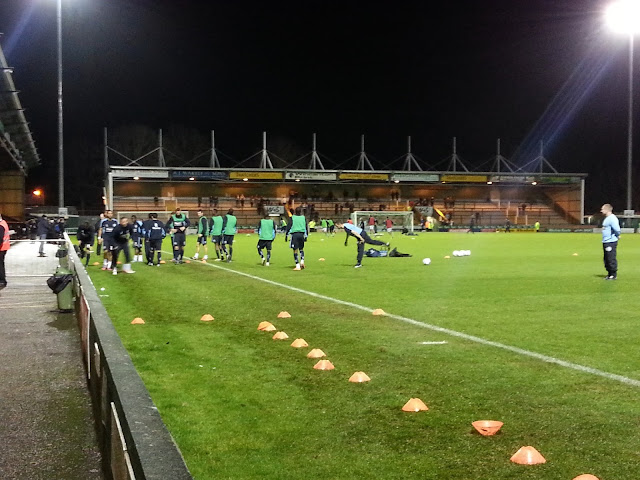 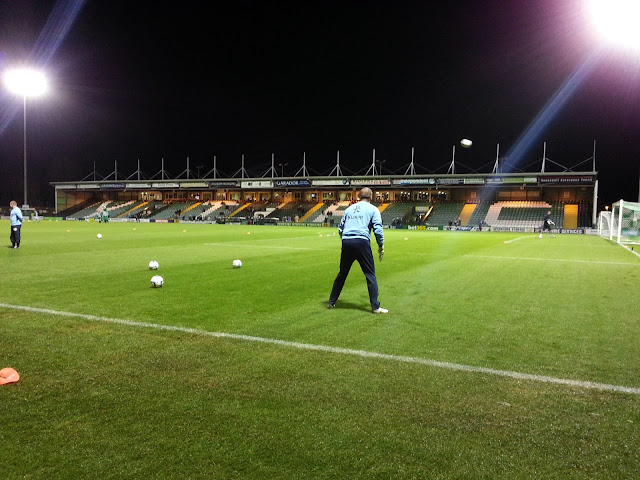 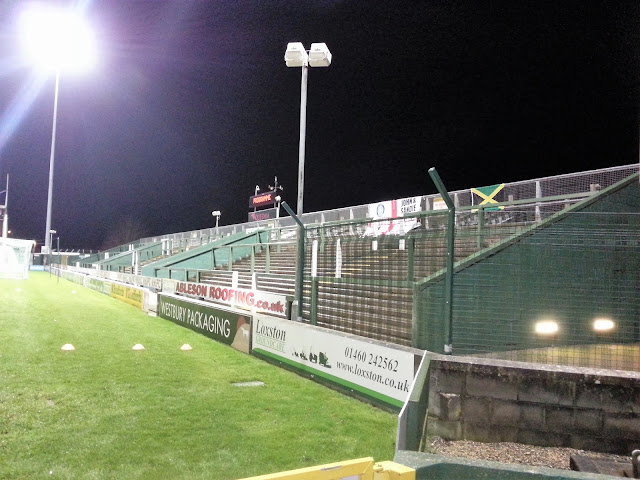 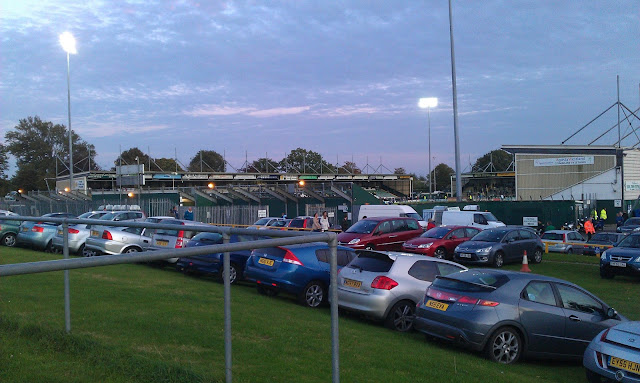