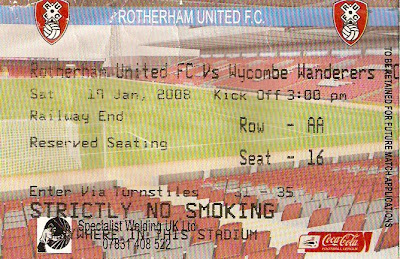 2:  The record crowd at the venue was in 1920 when 21,000 attended Rotherham County v Sheffield Wednesday. The recently expanded ground had seen renovation the year before and also saw renovation in 1951 and 2004.

3:  Rotherham United's best FA Cup Run came in the 1967/68 season where they took Leicester City to a 5th Round replay before losing 2-0 at Filbert Street.

4:  In 1960/61 Rotherham reached the innuagral League Cup final. After beating Leicester City, Bristol Rovers, Bolton Wanderers, Portsmouth & Shrewsbury Town, they faced Aston Villa in a 2 legged final. Despite winning 2-0 in the first leg at Millmoor, they lost the return leg 3-0 at Villa Park and were defeated 3-2 on aggregate.

5:  The club's best ever spell in league football came in between 1951 and 1968. During those 17 years they had unbroken membership of the Football League's 2nd tier, with their best finish of 3rd coming in 1955.

6:  Conversely Rotherham United did not have the best of times in the 25 years after first forming, never leaving the basement division. Their worst finish came in 1934 when only Rochdale kept them off the foot of Division 3 North.

7:  Rotherham United won the Football League Trophy in 1996 defeating Shrewsbury Town 2-1 with a brace from Nigel Jemson. It was their first visit to Wembley and over 20,000 fans from Yorkshire travelled down to the capital to lend their support.

8:  Rotherham United's most successful manager was Reg Freeman. Between 1934 and 1952 his 523 games saw a 48.18% win record. Caretakers adide, Uruguyan Danny Bergara was the least succesful as his spell in charge during the 1996/97 season saw just 14% of games won as the club were relagated from the third tier.

10: Rotherham United's last game at Millmoor came on Saturday 3rd May 2008. They beat Barnet 1-0 but financial issues and a failure to reach an agreement with the landlord - former chairman Ken Booth left them with no alternative but to relocate to Sheffield's Don Valley Stadium, 4 miles away. They returned to the town in 2012, paying at the newly built New York Stadium. 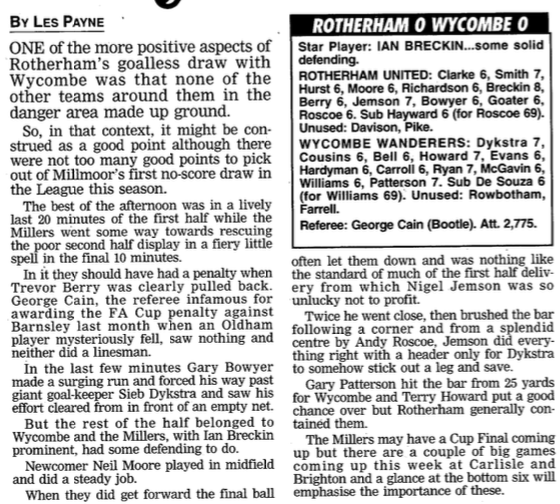 My first visit to Millmoor came in 1996 and was around the start that unpopular manager Alan Smith's career at Wycombe had started to unravel. Despite starting the season well with the bulk of Martin O'Neill's squad, Smith's new signings had failed to settle and had disrupted the team's momentum. Add to that the sidelining of fans favourite Paul Hyde and the fact that we had lost 5 out of our last 6 games and you could see why the fans were unhappy.

For the game I travelled with my Dad and my Brother on the Independent Supporters Club coach, though I can't remember much about the game. There wasn't much to write home about in any case as we played out a dull 0-0 draw with the relegation-threatened Millers. We were sat in 12th prior to the game and remained there until the end of the season as the indifferent results continued. 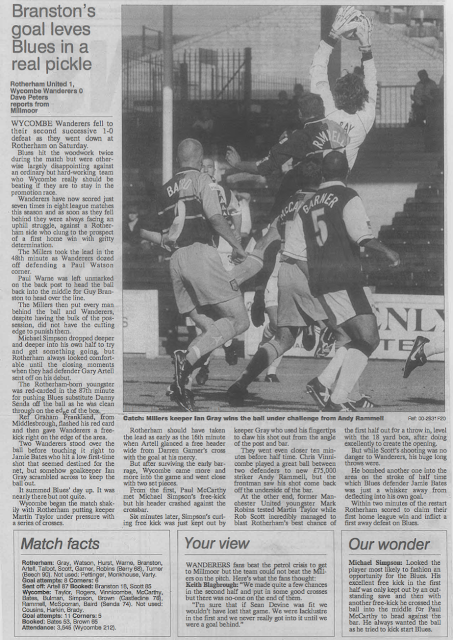 This game was played in the midst of a petrol crisis as lack of supplies saw long queues at the pumps for those lucky enough to get their hands on what was left, as many stations ran dry. This was all due to truckers being up in arms at the high levels of tax on fuel, which had recently been further increased. This led to them blockading fuel depots and panic buying by motorists. Around 75% of stations ran out of fuel - at the time the costs was 80p a litre which seems very cheap now.

Because of this, the game was in doubt but Motts, who supply the clubs team and supporters coaches assured that they could get us there and back, so I decided to go. For my second successive visit Wycombe failed to score and again it was a dull game. Future Wycombe player Guy Branston got the goal and despite his team mate David Artell getting sent off towards the end, Wycombe were unable to equalise. 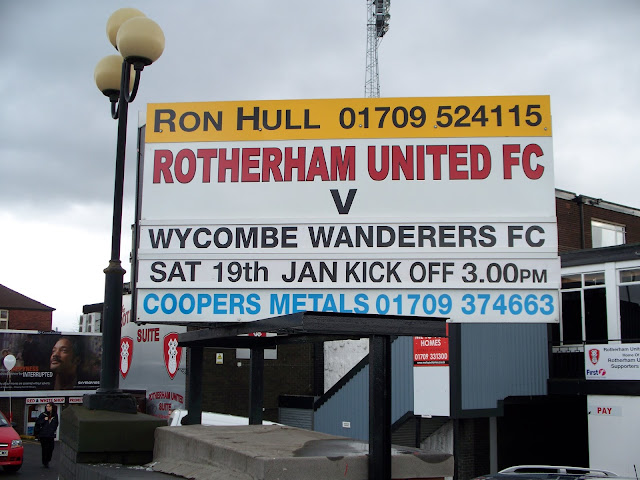 For my final visit to Millmoor I  went with my mates Paul & Sue who had family in Rotherham. We'd decided to do an overnight stop, staying in a local B&B as there was not to much space at their place, and in any case I like my own space. On the Friday night we met up with a load of other people and went on a pub crawl around Rotherham before getting back about 1am.

The following day there was a late breakfast at Wetherspoons followed by a stroll around town before the game. It looked to be the same old story for Wycombe when Stephen Brogan gave Rotherham the lead on 14 minutes. However, Wycombe finally struck a goal at Millmoor after 4 hours of me watching them there when Scott McGleish's cross-cum-shot flew in from the left. McGleish was in great form at the time, having recently scored all 4 goals at Mansfield as we coasted to a 4-0 win in torrential rain.

From the outside MILLMOOR looks an unwelcoming venue, at least around the away end. Surrounded by scrapyards there was also jagged glass on the tops of all the walls around the stadium, obviously to stop people getting in. But it was at least a proper football ground and once you got inside it looked fairly well kept. It also had a fairly decent location, within easy walking distance of the town, though I normally stayed in the vicinity of the stadium, using the Milmoor Cafe and club bar. 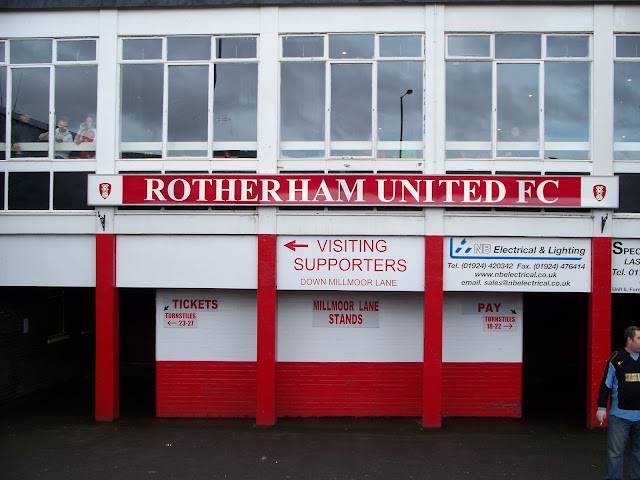 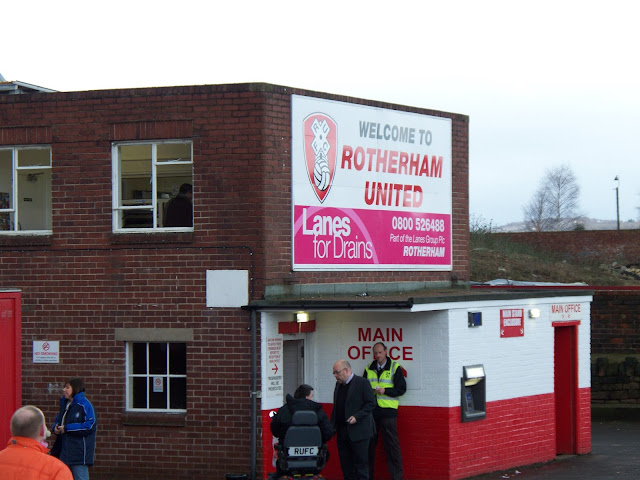 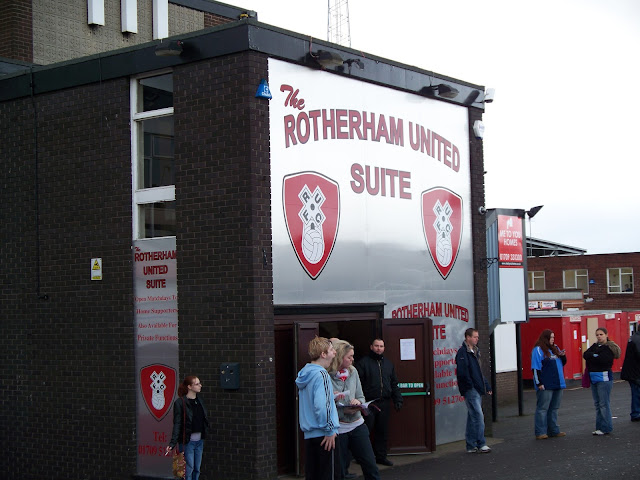 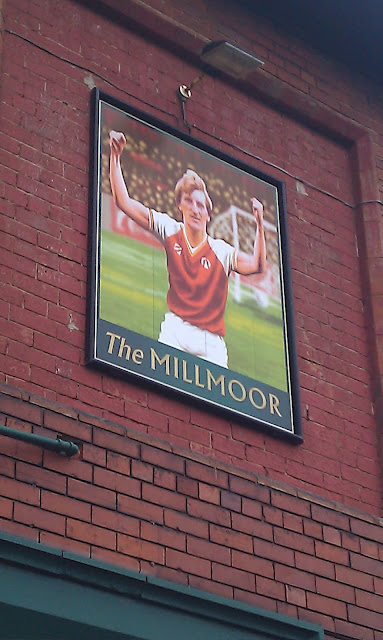 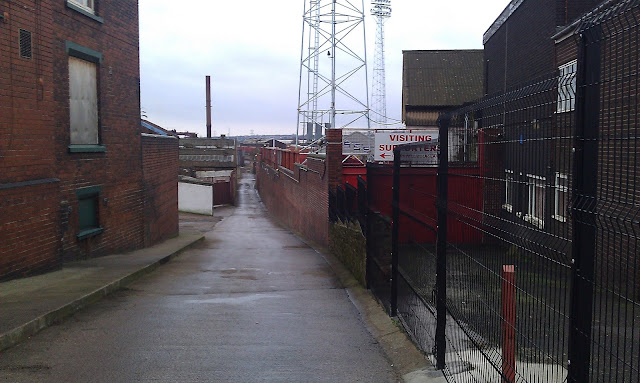 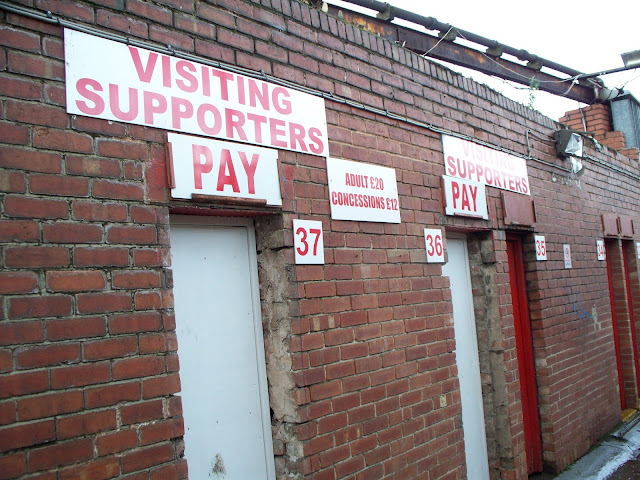 The MILLMOOR LANE STAND and adjacent COMMUNITY STAND was the only side that remained pretty much unchanged during my various visits. It consisted of the older Millmoor Lane Stand on the left, then the newer Community Stand on the right. Some of the latter was used for away fans seating prior to the ground being converted to an all-seater stadium. 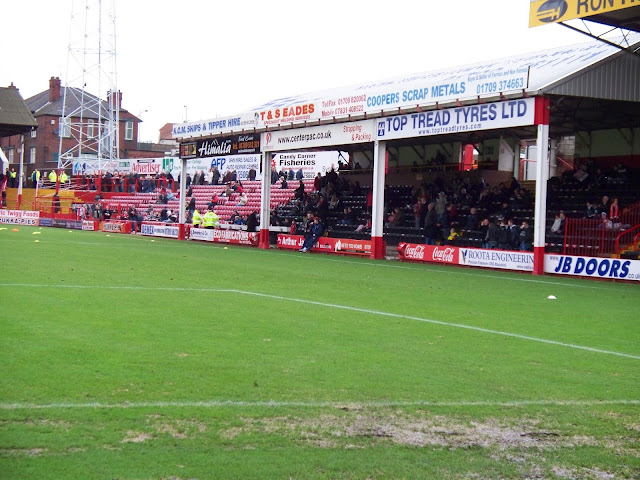 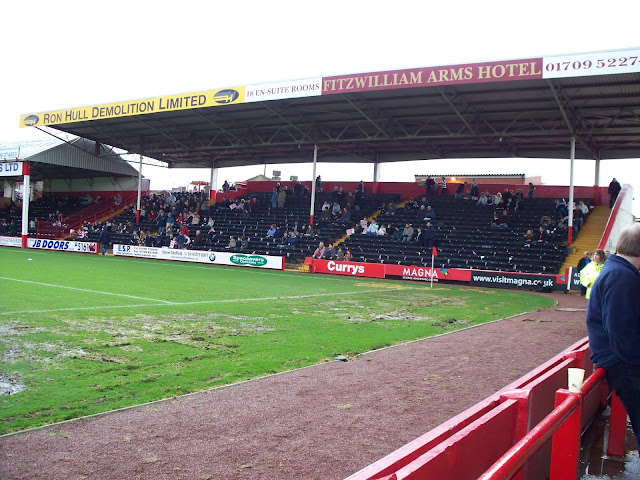 The two stands behind each goal - the TIVOLI TERRACE at the far end and the RAILWAY END which was the designated stand for away supporters were originally covered terraces but had been converted to all seated stands after my first visit. They held around 2500 apiece, falling to around 1800 following their conversion. 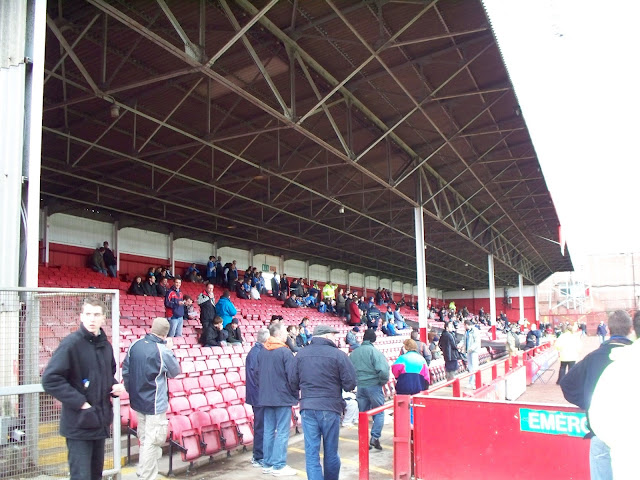 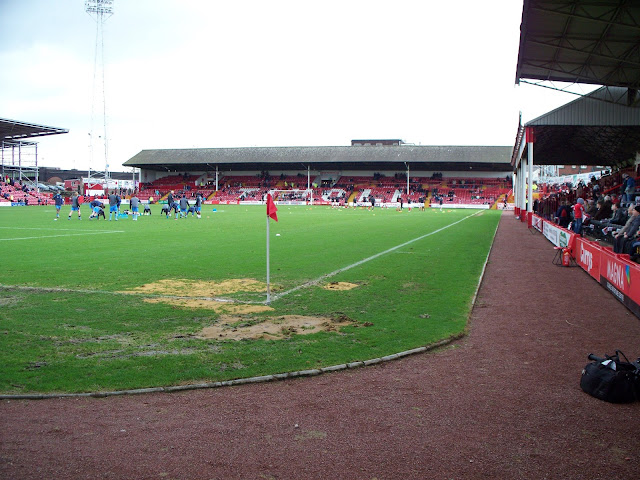 The remaining side - The MAIN STAND saw the biggest change between my 2 visits. In 1996 it was an old but perfectly decent stand, but upon my return, it had been torn down and replaced by a work in progress. The new stand never was fully completed, so it was a fruitless exercise in all honesty. 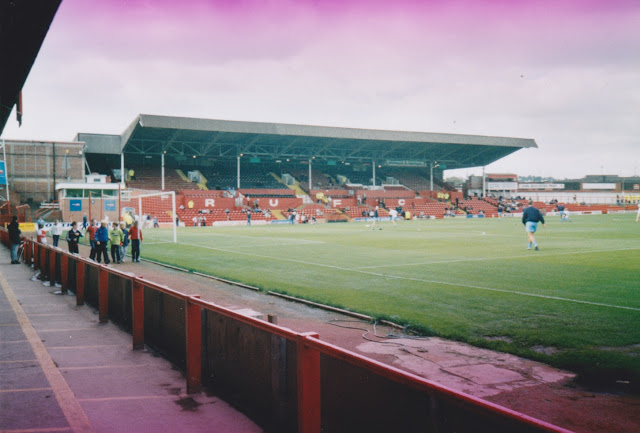 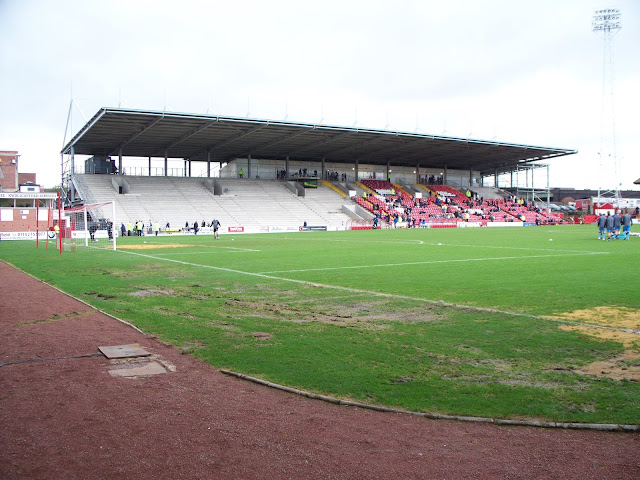