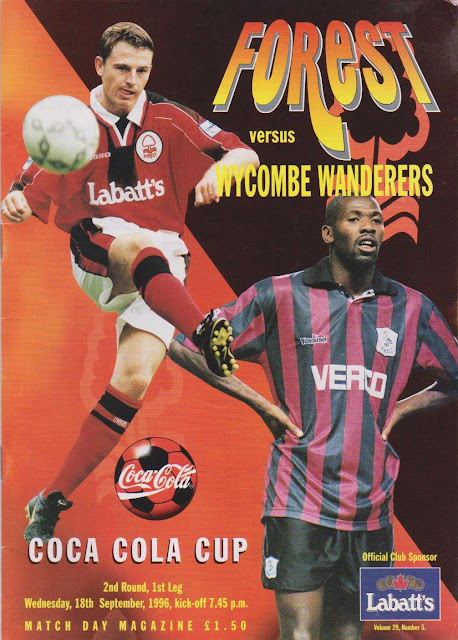 1:  The club is one of the oldest in football, having been formed way back in 1865 by a group of local shinty players. They were originally a multi-sport club with Forest's baseball club winning the British championship in 1899. The first football match played was a friendly against local rivals Notts County on 22nd March 1866.

2:  Forest's application to join the Football League in 1888 was rejected, so they instead joined the Football Alliance a year later. Three seasons were spent there, with the club becoming champions in 1892. The Alliance was dissolved that year with all clubs joining the Football League. As champions, Forest was one of three clubs elected to the 1st Division. They've remained there ever since with them being crowned 1st Division champions in 1978 under legendary manager Brian Clough. Their worst ever finishes have come in 1950 when they finished 4th in Division 3 South and in 2006 when they finished 7th in League 1.

5:  The club has won the European Cup twice beating Malmo 1-0 in Munich in 1978, then retaining the following season by beating Hamburg 1-0 in Madrid. They also won the European Super Cup in 1979 beating Barcelona 2-1 in a two-legged final.

6:  Other cup wins include the Charity Shield in 1978, the Full Members Cup twice and the Anglo-Scottish Cup in 1977.

7:  Prior to moving to the City Ground in 1898, Forest played at Forest Recreation Ground, Trent Bridge and The Town Ground. The stadium has been an all seated venue since 1994 and hosted games during Euro 1996 for group D teams Turkey, Croatia and Portugal. The highest attendance came in 1967 when 49,946 attended the game against Manchester United, whilst just 4,030 went the League Cup game against Morecambe in 2008.

9:  The most international caps received by a Nottingham Forest player is 76, Stuart Pearce making all but 2 of his England appearances whilst at the club

Under Brian Clough and in their glory days Notts Forest were used to playing in front of full houses. Even back in 1996 with them mid-table in the Premiership they were getting over 20,000 a game. But the general malaise of the League Cup (or whatever they called it back then, Coca-Cola Cup I think) was well and truly underway. And this was reflected in the attendance of just 6,482, with around a thousand travelling Wanderers. This would have been more had we had a popular manager in charge, but this was the back end of Alan Smith's dismal spell in charge and we were well in the relegation mire. That said, we had done well in the League Cup, already beating local rivals Reading over 2 legs back in August. Despite the unpopularity of the man in charge, Wycombe played well over the two legs and can count themselves unlucky. I can barely remember anything about my day there but I do remember going with a mate from school on the coach. 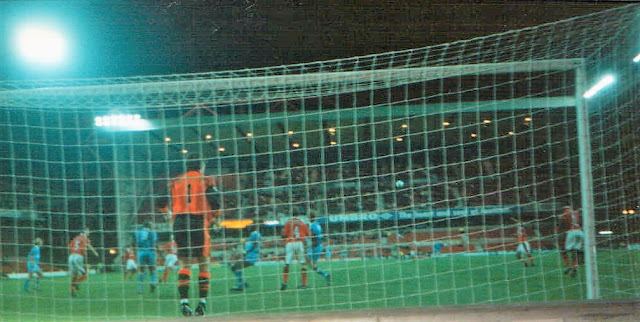 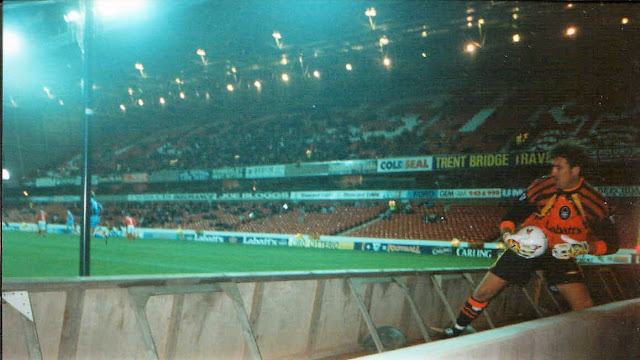 Despite the Forest fans general apathy towards the game, Forest fielded a full-strength side including the likes of Mark Crossley and Stuart Pearce. Wycombe frustrated their opponents in the first half with some stout defending. Indeed we had the best chance of the first half when Miquel Desouza broke clear, got into a one on one situation but put his shot wide. Forest were duly booed off by their own fans at the interval. 3 minutes after halftime they took the lead with a well-taken goal by Brian Roy. Despite further chances for both sides, the game ended 1-0 to the hosts which set up an intriguing second leg back in Bucks. For the record that game ended 1-1, with Wycombe taking the lead and taking the game to extra time. But Jason Lee (minus his infamous "pineapple" haircut) spared Forest's blushes and killed Wycombe's cup dream by scoring the goal that secured Forest's place in the next round.

I visited the ground again in February 2006, while we were up at Notts County, to take a few photos. They were really friendly and gave us free reign to take whatever pictures we wanted. It was also my mate Paul's wife's Birthday, he let them know and they presented her with a great signed photo, the sort of which you'd be looking at a fair amount if ever it was on sale. The ground hadn't changed much from when I'd last visited, still a very decent ground at any level, let alone League One where they were plying their trade at the time. 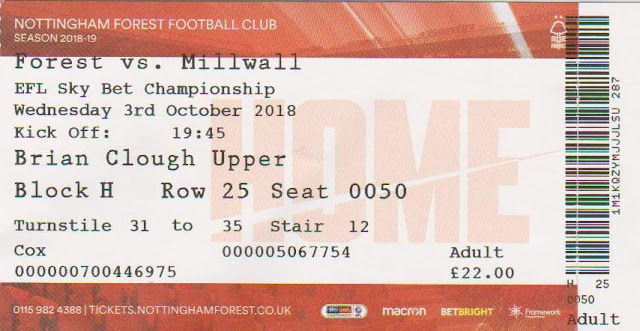 I was keen to visit some grounds to update my blog and Nottingham Forest was one of these. With a decent amount of food and drink options around it, it was one of the better days out in football. For some reason, I was not in the habit of doing revisits when I dropped fellow hopper Anwar there in December 2014, option to go to Long Eaton instead. Nearly 4 years later and I was finally able to retick when fellow hopper Chris expressed a desire to go there. We chose the game against Millwall as it was on my week off and all the other options were much longer distance which would not have been ideal with Chris having work in the morning. I started tidying up my blog the day before the game and also doing research into parking and dinner options. On the day of the game, I spent the morning walking down town before getting a lift back with my Dad. I didn't have long after lunch, so just watched a few YouTube videos before leaving at 2.30. Before meeting Chris, I popped to a farm shop he had recommended called Frosts. There I got a few ciders from a brewery near Leek and some snacks. I met Chris just before 4 and we were soon on our way after I'd ordered the tickets on my phone for the Brian Clough Upper Tier. It was a surprisingly good journey and we were parked up outside Notts County by 6. We headed for a pub called The Embankment as there was supposed to be decent real cider. Sadly they were all fruit ones, so I opted for a Castle Rock Raspberry Ripple Fruit Beer. I detest brewers gerrymandering my cider, but I do like a Fruit Beer, having had many great cherry ones in Belgium. 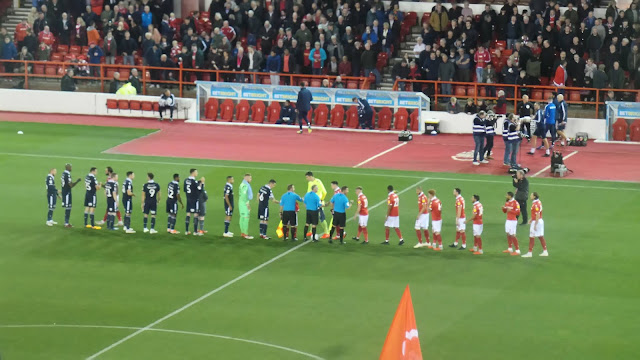 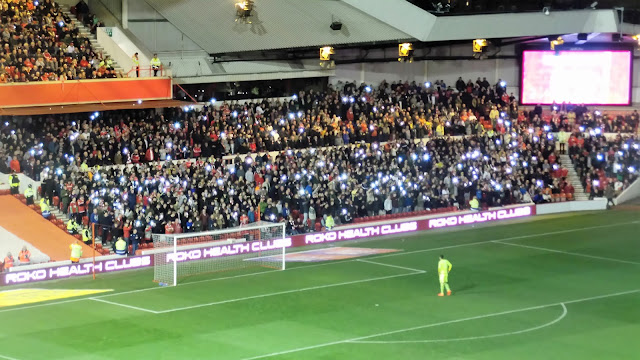 From there we headed back to the ground, getting a beef cob along the way. We got into the ground at 7, having plenty of time to spare before kick off. I caught up online as I waited for kick off. Our seats were decent but there was no atmosphere whatsoever with events on the pitch seeming totally detached from the crowd. The Millwall fans were making all the noise and their team was well on top. But it was Forest who took the lead on 27 minutes with a great strike from just outside the box by Joe Lolley.  Millwall had enjoyed the better of the first half but in the second, Forest seized the initiative. The game gradually petered out and it was only the intervention of a floodlight failure that bought any excitement. The pitch was still well lit, as only one side had done but the referee decided to call a halt to proceedings, taking the players off whilst the fault was fixed. How they could have done with former player Stuart Pearce, not just for his great football skills, but also as he was a qualified electrician who once advertised his services in the matchday programme. It took 10 minutes for normal service to be resumed and when they did, the hosts extended their lead on 70 minutes. A free kick from Joao Carvalho cannoned off the bar and bounced on the line, with the officials awarding a goal. Millwall looked dead and buried by now but they got a deserved goal back on 74 minutes when Shaun Williams headed home. All three points looked to be heading Forest's way but the game had a late twist in the tale when Lee Gregory netted a scrappy equaliser in injury time. 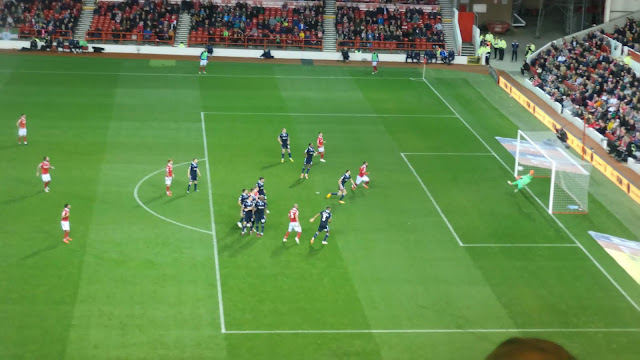 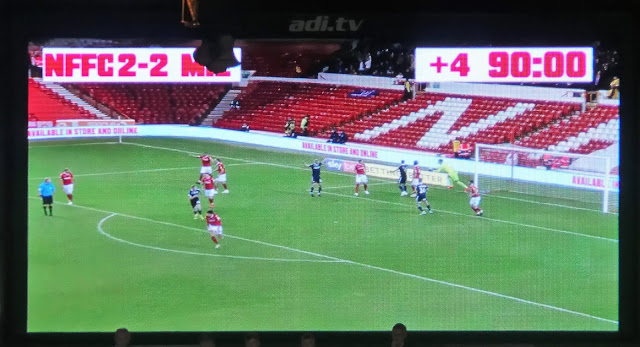 The atmosphere and game had improved a lot after the lights went out, but overall, it was a fair result. Looking at the stats when I got home, Millwall had 20 shots to Forest's 7 but the hosts had 56% possession. It didn't take us long to get back to the car, with us back just after 10. As expected, the traffic was really busy, so it took a while to get away. We were both peckish and so headed for The Big Bamboo, a Chinese takeaway that we had been to when visiting nearby West Bridgford. I had salt and chilli chips and chicken satay skewers, both of which were very nice. After getting a bottle of Irn Bru from a local shop, we left at 11. It was an OK journey home with a diversion due to a closure on the M1 not adding too much time to the journey. After stopping for petrol I dropped Chris off at 12.40, getting home myself at 1.30. 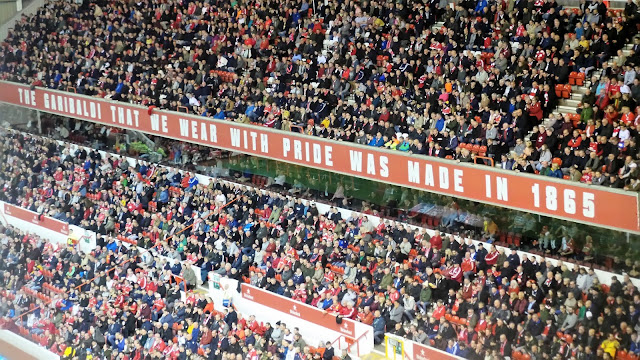 THE CITY GROUND is a great venue which is better than some Premier League grounds. It's an all-seater stadium with a capacity of 30,445. The largest and second newest of these is the Brian Clough Stand - this named in the honour of their greatest manager and is a two-tiered affair. The Trent End is of a similar size and is slightly newer, this is behind one goal. Behind the other goal is the Bridgford End, this is smaller thanks to council restrictions (so that nearby houses get light). Visiting fans get part of the lower tier of this, around 2,000 in total. All these previous stands are pretty modern efforts, whilst the one remaining stand, the Main Stand is a little older but still decent.

The ground is set in a lovely location on the banks of the River Trent and despite it being around a mile from the city and train station there are quite a few pubs around, though these tend to be home fans only. There's a Wetherspoons and a choice of takeaways as the ground is also located close to Trent Bridge cricket ground and Notts County FC. The club shop and tea bar as typical of what you would expect from a Football League club - OK if you are in a fix, but prices have a premium. 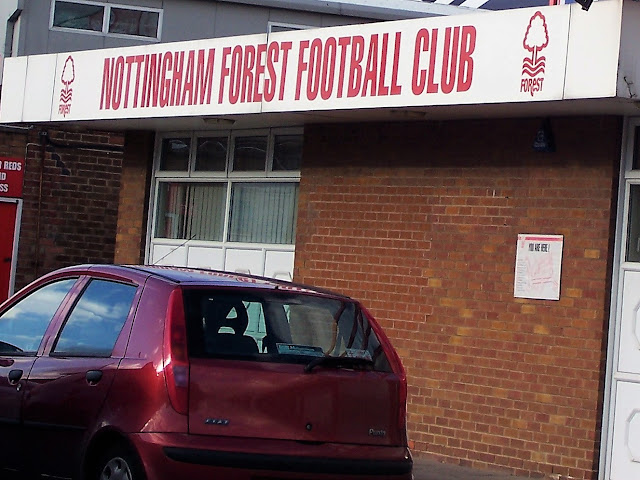 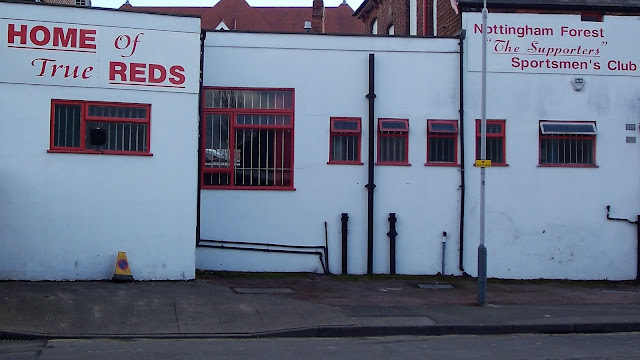 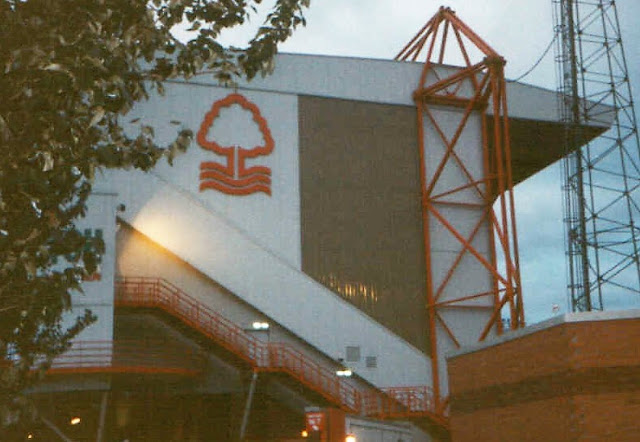 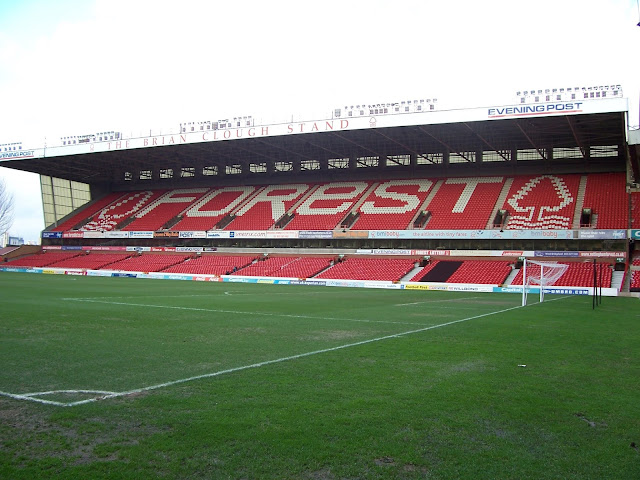 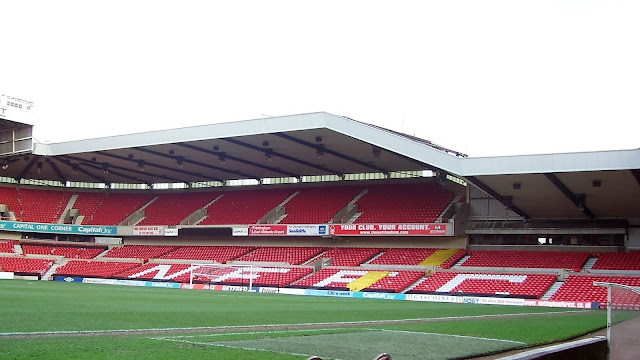 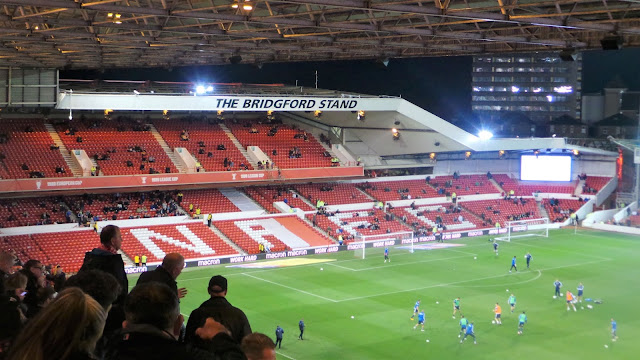 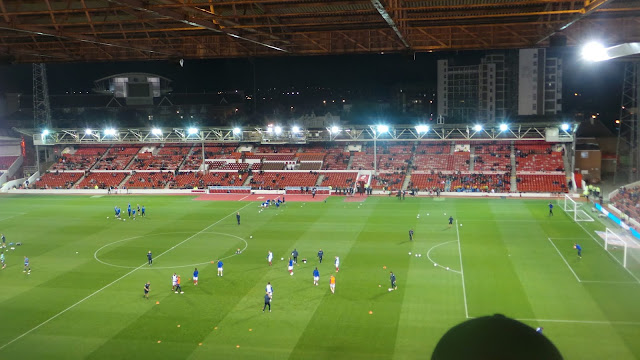 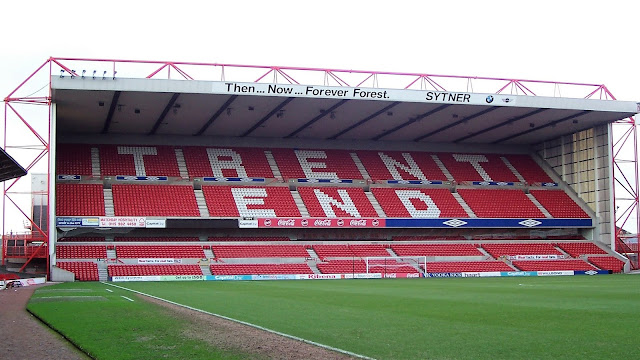 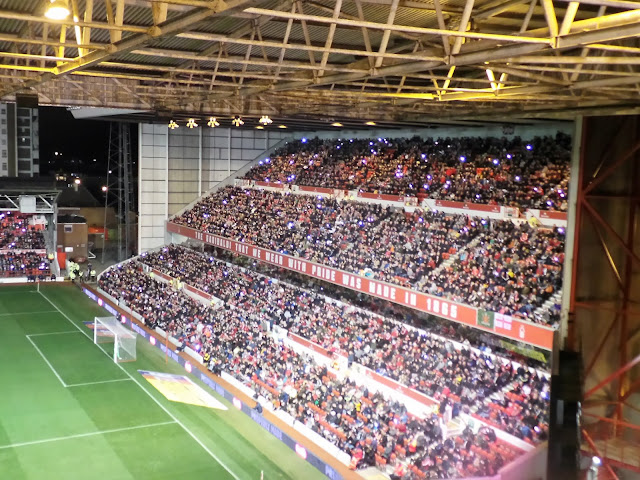 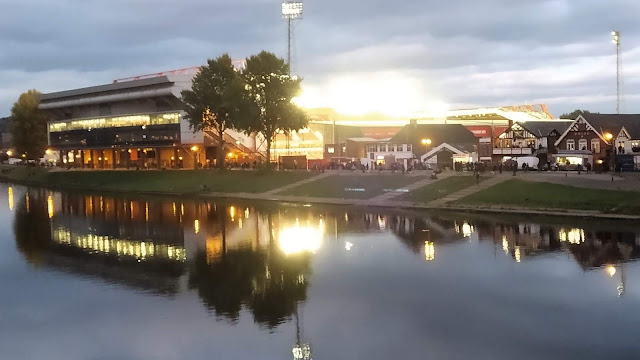