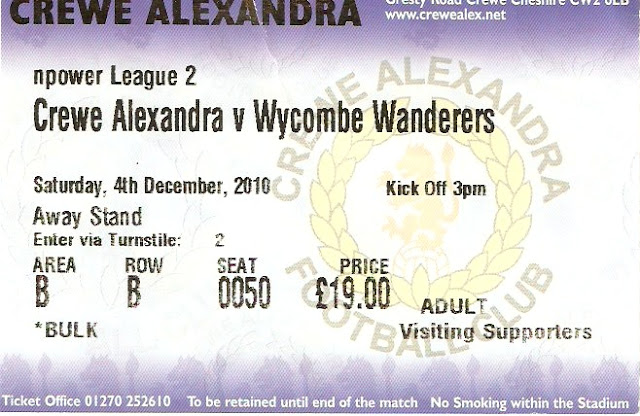 The club was founded in 1877 and was initially known as Crewe FC. They spent their formative years in non-league, plying their trade in the Combination, the Birmingham Alliance and the Birmingham & District League. In 1921 they were founder members of Division 3 North, their best finish here being 6th, achieved on a few occasions. After three consecutive rock-bottom finishes, Crewe Alexandra became members of the newly established Division 4 in 1958. Aside from 1968/69, where they'd finish 23rd in Division 3, Crewe remained here until 1989. Since then, the club's form has varied wildly, though the majority of the time has been spent in the lower two tiers. Crewe enjoyed a decent amount of time in the second tier under Dario Gradi in the late 90's and early 2000's, the best finish coming in 1998 when they finished 11th. They last played there in 2006 and the last couple of seasons have seen them back in the basement division and not looking like they are going to return anytime soon.

Early seasons in the FA Cup had contrasting fortunes - their first ever game in 1883 seeing a 10-0 defeat to Scottish side Queens Park. By the 1887/88 season though, they were semi-finalists, beating Swifts, Derby County and Middlesbrough before a 4-0 defeat to Preston North End at Anfield. In more recent times, they reached the 5th Round in 2002, losing out to Everton after a replay. They've also suffered the ignominy of first-round defeats to Tamworth and Eastleigh in the last decade. The best run in the League Cup has been the 3rd Round whilst Crewe won the Football League Trophy in 2013, defeating Southern United 2-0 at Wembley Stadium. Local cup wins include the Cheshire Senior Cup on seven occasions, the Cheshire Premier Cup twice and the Welsh Cup on two occasions.

Players produced by Crewe Alexandra have been numerous and include David Platt, Neil Lennon, Robbie Savage, Danny Murphy, Seth Johnson, Geoff Thomas and Dean Ashton. Sadly the club have also been involved in the recent sexual abuse scandal that engulfed football, with pervert former coach Barry Bennell being the main perpetrator, mainly back in the 1980's. The club's main rivals are Port Vale, with the two sides enjoying some fiery clashes in recent years. Wrexham, Shrewsbury Town. Stoke City, Stockport County and Chester City have also been arch enemies in the past. The population of Crewe itself was 72,863 according to the last census, the main industry being in the railways, hence the club's nickname of the Railwaymen. 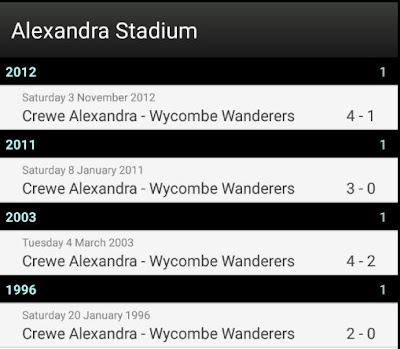 My first visit to Gresty Road came in January 1996. I went with my Dad and my brother with us travelling on the Independent Supporters Club coach. I was not of drinking age at the time which is the same as I remember the pub we stopped at, The Rising Sun in Audley was pretty decent. My research tells me that the pub brewed it's own beers and sadly closed in 2001. My only memory was the excellent chips, the only real pleasure I could enjoy at that time. Crewe Alexandra were producing some great players at the time and named Neil Lennon in the starting lineup and Robbie Savage on the bench. Crewe were 2nd in the league at the time, whilst Wycombe under the odious Alan Smith were treading water in mid-table. A dreadful first half performance saw Wycombe two down at the break, the first goal coming from Mark Rivers when his shot squirmed under on-loan keeper Ben Robert's body. The second from Neil Lennon was contested by Wycombe, but was ruled over the line. The second half performance was much improved, with a John Williams goal ruled out as well as a Steve McGavin penalty miss, but in any case, we came home empty-handed. 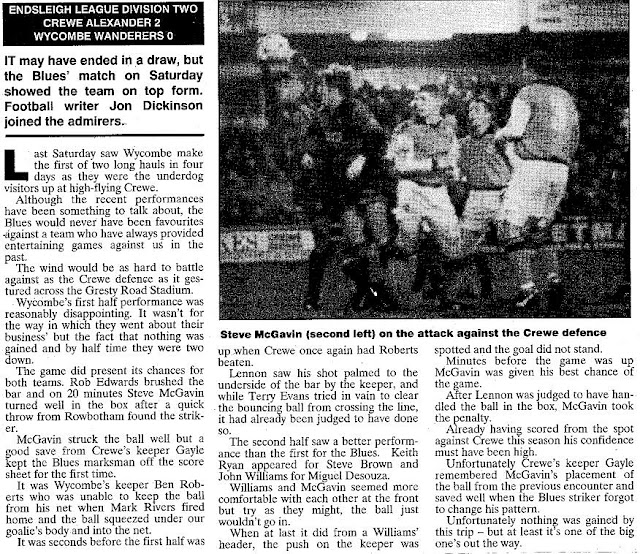 My next few visits proved equally fruitless. My only midweek visit in 2003 meant a trip on the official coach and I was amazed when a round for me and my mate Adam in the local pub cost less than £3. It was another defeat for Wycombe though. Despite manager Lawrie Sanchez being hailed a hero a year or so before, his reign had begun to unravel and fans were starting to lose patience. Dean Ashton gave Crewe the lead, but Johnny Dixon equalised for Wycombe. We generally played poorly though and were back behind when Kenny Lunt converted a penalty. Further goals from Rob Hulse and Dean Ashton ensured Crewe of the win, despite a great 25-yard goal from Dannie Bulman, it was three defeats in a row for the Chairboys. The next two games were for heavy defeats - 2011 for a 3-0 league defeat and then the following year for a 4-1 defeat in the FA Cup 1st Round. I drove the second time and at least had a pre-match drink in the Belgium Hops bar, my tweet about the place ironically being picked up by my former teacher who I'd not seen for 15 years. 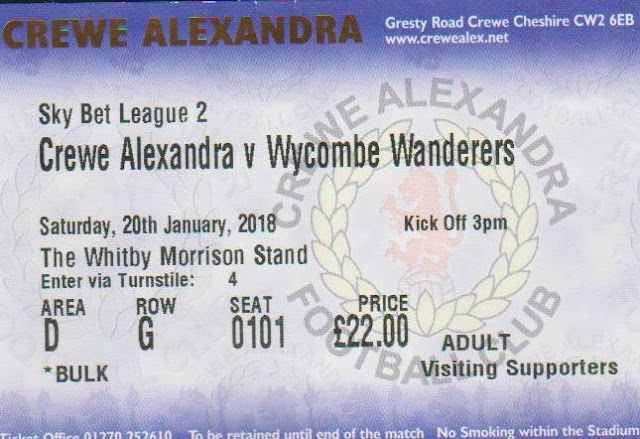 At the beginning of the season, I vowed to visit all the grounds that I'd not been to for a while and reblog them. I'd accomplished this more often than not - only missing out on Newport County, Mansfield Town and Stevenage so far. Incredibly, I'd dodged a trio of goalless draws for various reasons - it's not often that I have luck like that, but I was glad that I didn't go. to any of them. Initially, when I'd been planning games at the start of the season, I'd wanted to go to Crewe on the train. There were so many great pubs there and I wanted to sample some more of them. After careful consideration though, I decided to take the Independent Supporters club coach to the game. It would take the inconvenience and expense out of the train travel and the pub arrangements were not all bad. I'd get picked up a few minutes away from my house and the coach stopped in Bignall End which had excellent establishments for food and cider, albeit in two separate places. I spent the previous week writing up my blog for old visits to Crewe and also planning in future revisits to Leighton Town and Kidderminster Harriers, the latter via train once the weather was confirmed as OK. The night before was a light one drink wise, just a couple of pints and an early night. 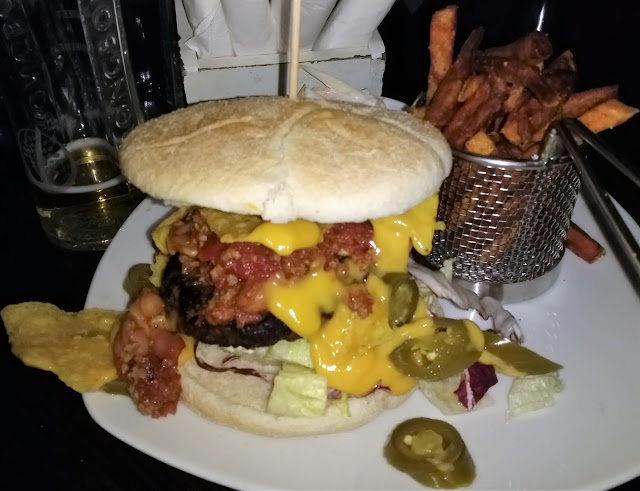 Annoyingly, I woke just after my normal work time on the day of the game and couldn’t get back to sleep. After watching videos and browsing the net for a bit, I got up at 7am, having a bath and breakfast. At 8.10, I got my stuff together and went down the local shop. After buying a Daily Star, I went back to the coach pick up point, having to run the last 200 meters as the driver was 5 minutes early. I met up with my Mum & Dad and soon enough we were on our way. After picking everyone up, the coach was still half empty, but at least it meant that I’d get a double seat to myself. The usual process of ordering food went ahead, I was disappointed to see that the Thai Green Curry had disappeared off the menu, but ordered a nice looking chilli burger instead. Given the extra space I had, I wish I’d bought my laptop, but at least I had plenty to keep me entertained. I cracked on with today’s blog and started to research Leighton Town’s history for my revisit on Tuesday. It was a right miserable day, with rain and sleet. As you’d expect, games were being called off left, right and centre. I was glad that my option was fairly safe, though I still double checked for any news of a pitch inspection. After a brief stop at services, we were on our way, arriving in the village of Bignall End just after midday. 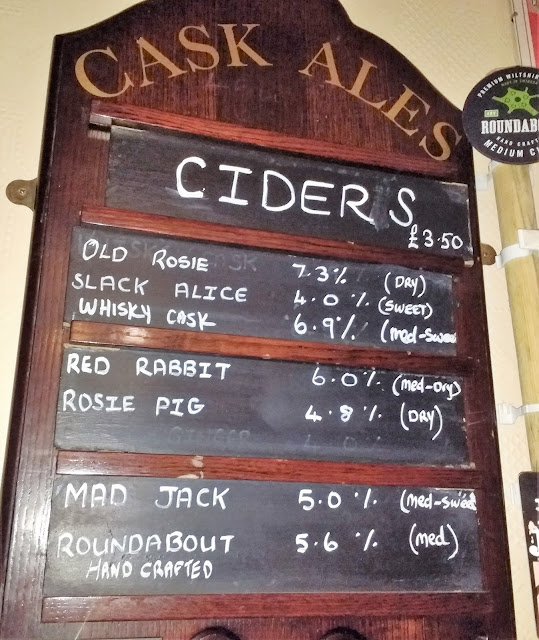 When we got to the pub, there was a bit of a disappointment. Two people had phoned in sick, meaning the landlord was on his own at the bar and his wife on their own in the kitchen. It was all very friendly, but I was glad that the coach was sparsely populated as I was hoping for an early dinner. I wasn't in luck, with me having a Strongbow and a Strongbow Dark Fruits during the wait. I did eventually get to the other pub, the Swan with half hour to spare. There I had pints of Roundabout Medium cider and Appleshed. My drinking time had been curtailed but I place no blame on the people at the first pub, they'd just been let down by flaky staff. The chilli burger was decent, one of the better meals I’d had on our coach, but soon it was time to go. I legged it up to our coach, getting on just before it left. It wasn’t long to Crewe, around 20 minutes with us getting there at 2.30. There was a faff for 10 minutes as the stewards refused to let us off the coach. They were bemused that we didn’t have a policeman on our coach, I don’t know why, last time I checked, being a football supporter is not a crime. 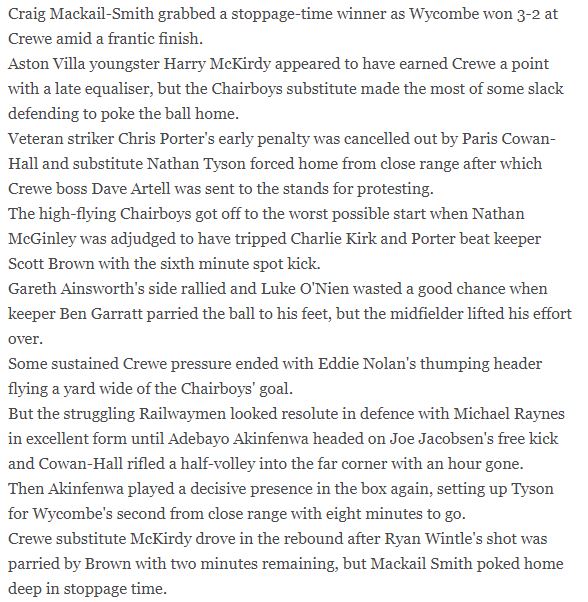 Straight into the ground we went, the report from ESPN is above for reference. It looked the same old story first half - a combination of the usual lacklustre performance and a rushed liquid lunch had me almost falling asleep. The second half was better, substitutes changing the game around and giving us the lead. It looked as if we might have was it settle for the draw when Crewe equalised near the end and I’d have been a richer man as I pulled 2-2 on the pre-match sweepstake. But I was glad to give that money up when Craig Mackail Smith got the winner 5 minutes into injury time. It was just about deserved, a dramatic last quarter in a game that had failed to live up to the 3-2 scoreline. After a quick visit to the toilet, it was back on the coach and homebound. I’d have loved a few pints in Crewe, but with work in the morning, the mediocre drink choices back home would have to do. My feet were soaked through, so I spent the whole of the journey home barefoot. At least the journey home didn’t feel like a long one, especially when I had Danny Kelly to listen to on TalkSPORT. There was a 20 minute stop at Warwick services but even so, we were back home by 8.30. I had a couple of drinks while watching YouTube and other videos until Match Of The Day came on, before going to bed around midnight. 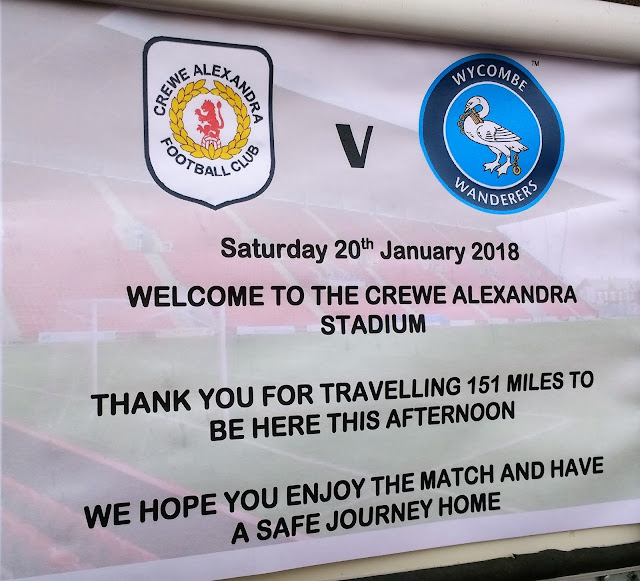 GRESTY ROAD is a fairly decent ground and good views are offered from all seats. Three of the stands are all around the same height, but only provide 3,000 out of the 10,000 capacity. Away supporters were originally given the Wulvern Homes Stand on my first visit, but now they get the Whitby Morrison Ice Cream Stand, capacity 1,680. This offers reasonable views. The only stand that has changed is the new main stand. This replaced an older structure in between visits 1 & 2 and is huge with a capacity of 7,000. Food inside the ground is the usual dull selection of overpriced and bland options. Opposite the ground is an excellent chippy - if you are in a rush, you are much better off eating there.

Crewe also has a rarity at a football league ground - a programme shop. Run by the supporters, it offers a great selection of programmes at reasonable prices. Just 15 minutes walk away is the town centre - this is excellent and offers a wide range of places. Many are well worth a visit. Due to driving duties, my visits have been restricted to the Belgian Hops bar, but what a place it is. A great range of ales, Belgian beers and real ciders await. It's a nice place for a pre-match pint and prices are reasonable too. 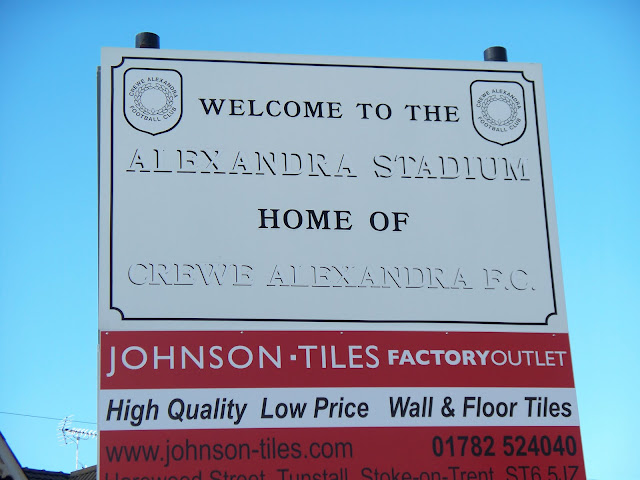 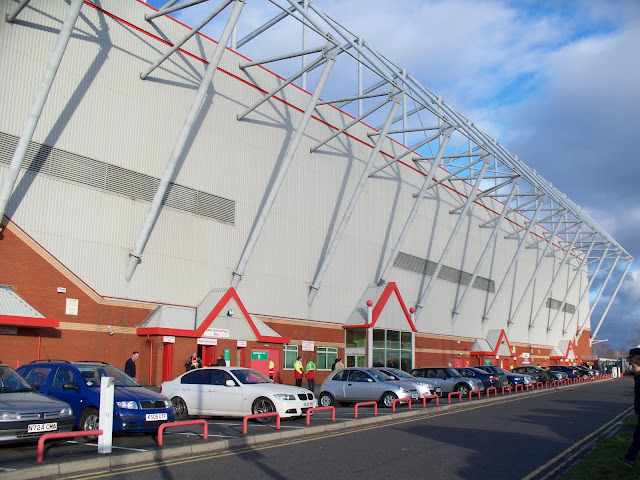 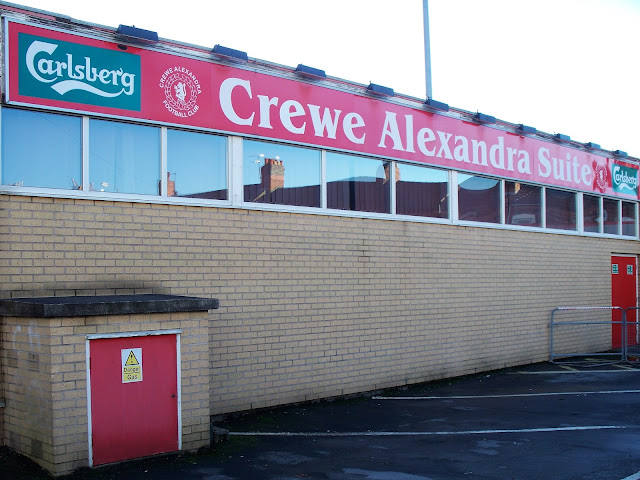 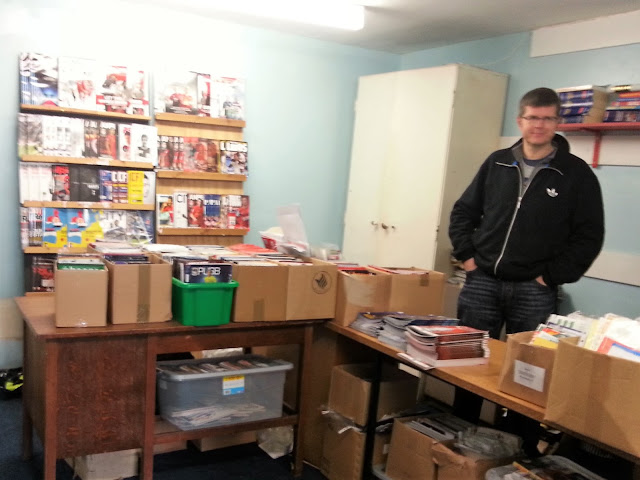 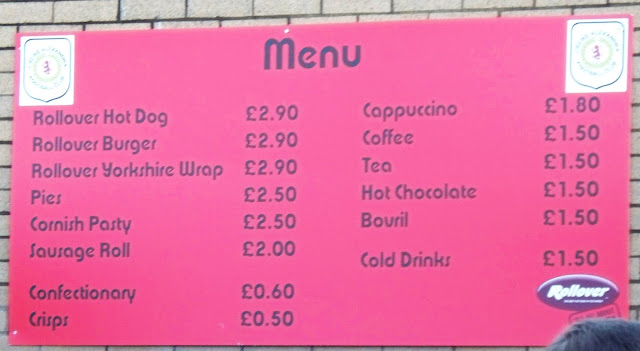 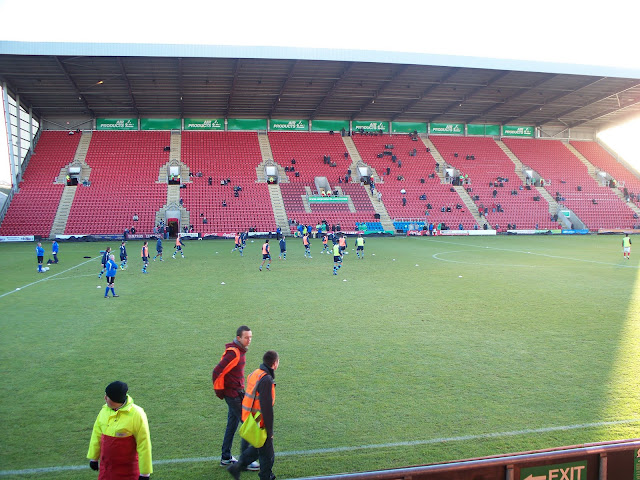 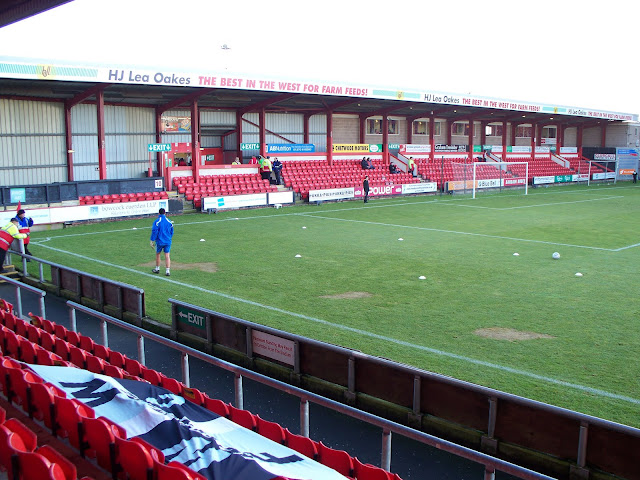 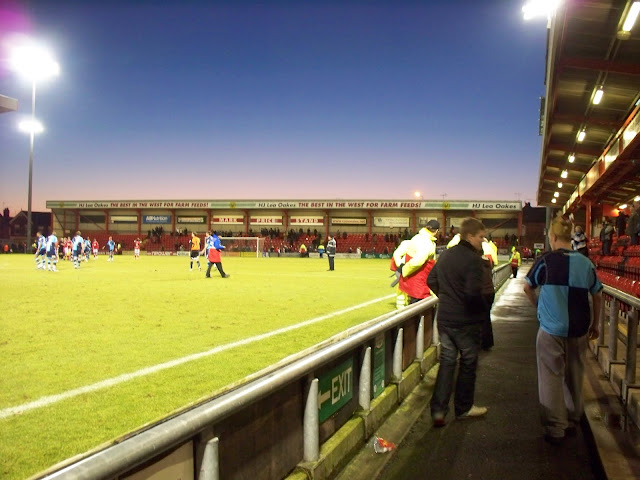 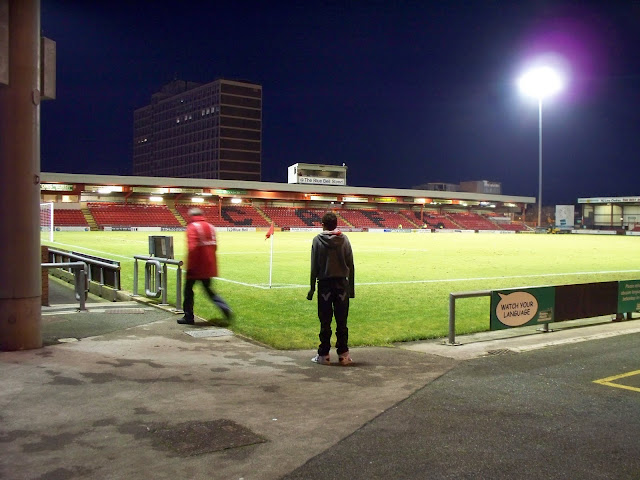