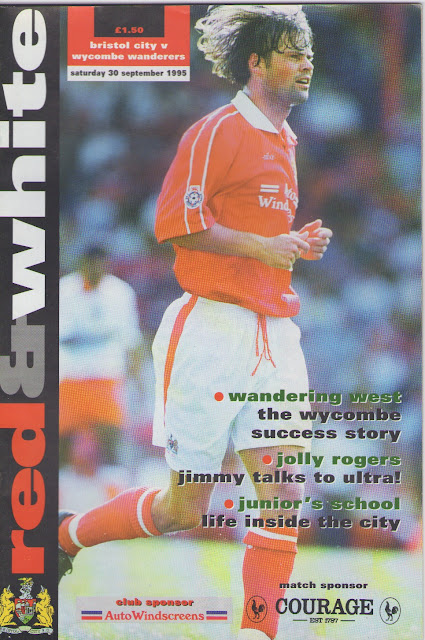 1:  The club was established in 1894 as Bristol South End, changing their name to Bristol City in 1897 when they turned professional. They started out in the Southern League, finishing as runners-up on three occasions. 1982 saw bankruptcy and reformation although they were able to continue without a break in play.

3:  Bristol City were FA Cup finalists in 1909, losing 1-0 to Manchester United in a game played at Crystal Palace.

4:  The club reached the League Cup Semi-Final in 1971, losing to Tottenham Hotspur over two legs. 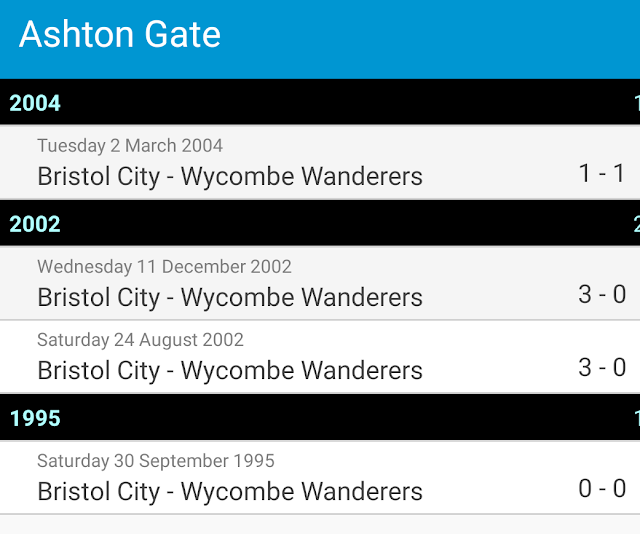 I'd been to Ashton Gate four times prior to my latest visit, although I have barely any memory of the days. I recall my first visit, a 0-0 draw in September 1995. Bristol City fielded Sieb Dykstra who was amused by our 'dodgy keeper' chants and he went on to join us later that season, making 8 appearances for Bristol City and 13 for Wycombe whilst on loan from QPR. My next three visits came during my spell of not missing a game, home or away in seven years. There was two 3-0 defeats in 2002 and a credible 1-1 draw in 2004, a season in which we were relegated in early April. 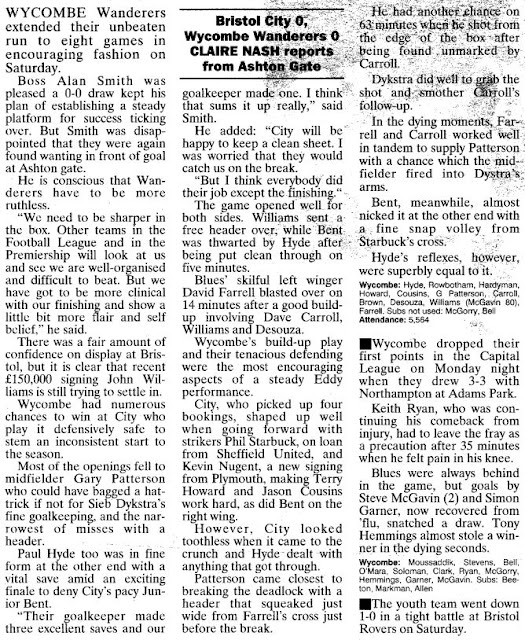 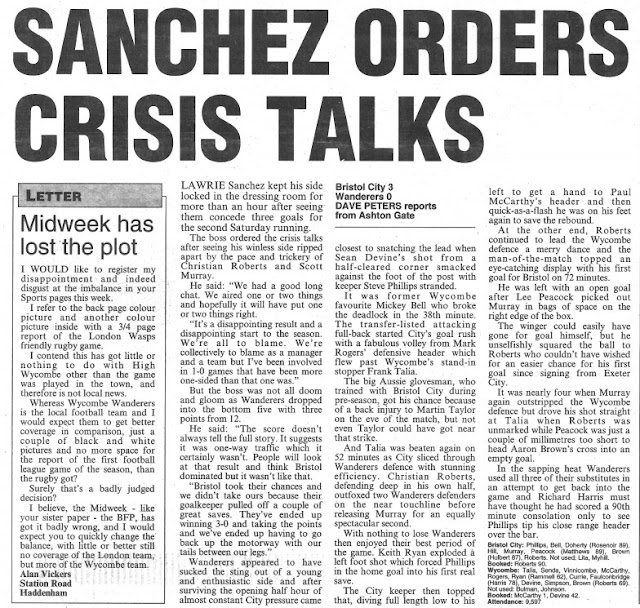 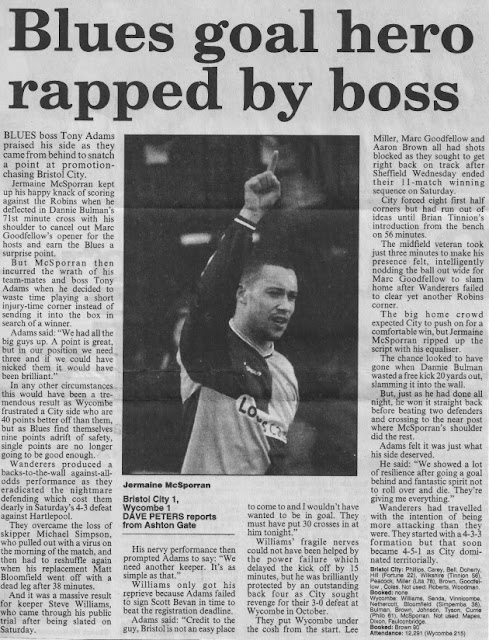 Id wanted to revisit Bristol City for a while, but the high ticket prices put me off. Eventually, the opportunity came up when they drew Shrewsbury Town in the FA Cup 3rd Round, with tickets only £10. Initially, I'd been hoping to look around Bristol and visit a few cider pubs, but the game was scheduled for an early kickoff, meaning that a double was possible. Thanks to an app on my phone, I discovered that Portishead was doable via a single bus ride from Bristol City. This tied in well with getting maximum value for my ticket and also my new year’s resolutions to drink less and eat healthier. These probably won’t last long, but even so, I got my coach from London to Bristol booked as soon as possible, the cost slightly higher than usual at £20 but still far better value than the train. By the time I’d factored in getting to the station, my train into London and my buses in Bristol, it worked out at £18 per game. The night before, I’d enjoyed a quiet night in and had an early night. Having had my best night’s sleep in ages the previous night, I had a restless night’s sleep before waking at 5.45. Even so, I felt pretty good and so after getting ready and having some breakfast, I left home at 6.10. After parking up near the station, I stopped at Tesco for a paper before getting the 6.39 train to Marylebone. 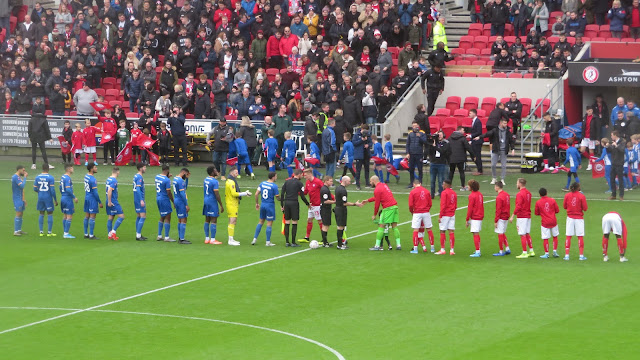 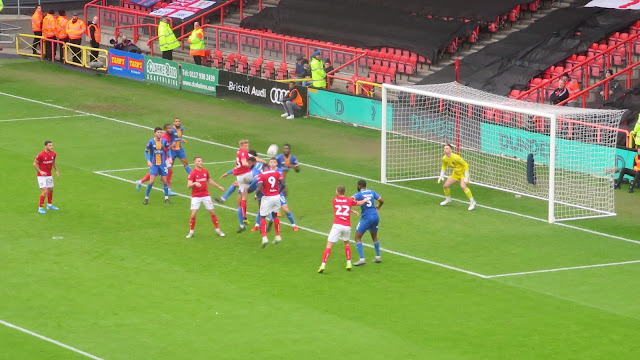 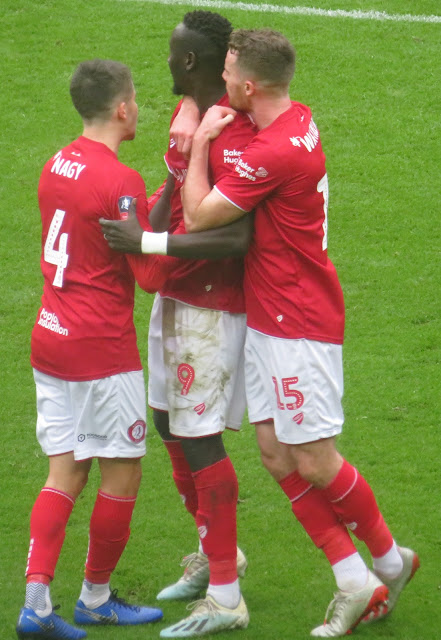 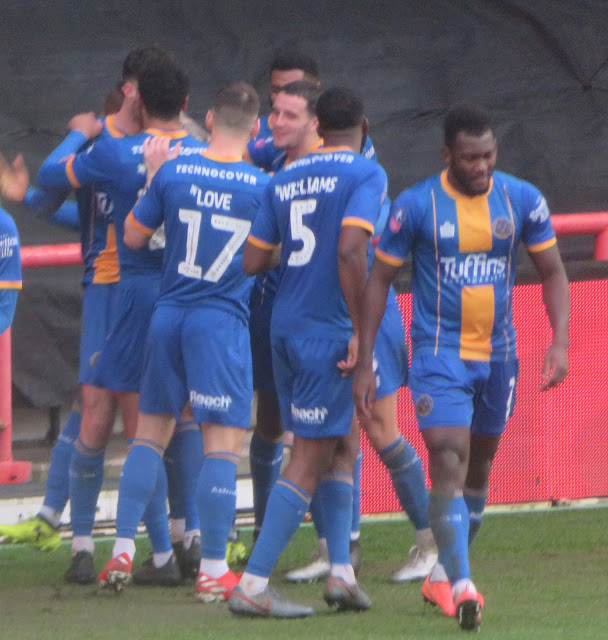 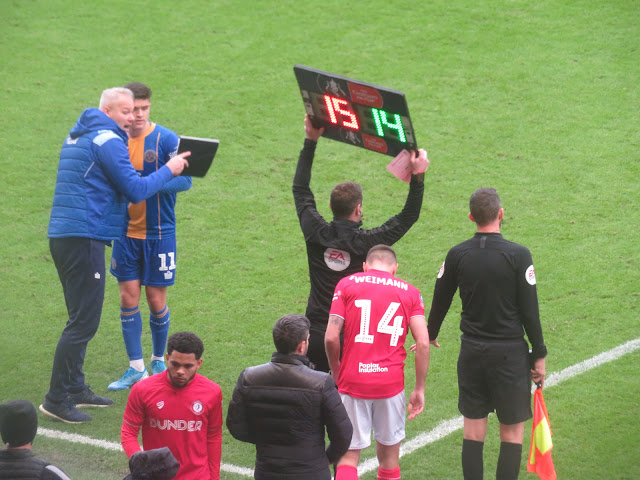 It was nice and quiet at this time in the morning and so I used the time to catch up online and read my paper. After a change at Oxford Circus, I arrived at Victoria well ahead of time. Even by the time I’d taken the walk to the coach station, I still had 45 minutes to spare. The place was a lot more packed than usual with several international destinations on offer. This appealed to me, especially if I could visit a few pubs in London and get an overnight bus. Unlike my last trip to Poole, this coach was well on time and I was happy to get a double seat to myself for the whole journey with about 15 passengers sharing a double-decker. I arrived in Bristol at 11.05 and purchased a £6.60 West Of England ticket on my phone. I decided to make the most of my time in Bristol by visiting The Orchard which promised up to 24 real ciders. With time limited, it was annoying to have to wait ten minutes for my bus. I got the X1 to Weston Super Mare, getting off as close as I could to the pub. That was after a short ferry that I wasn’t expecting, though the cost was only £1. Well worth it as I ticked two new ciders - Pulpt Union and Heck’s Lady’s Finger which were both top-notch. I left for the ground at 12, a 20-minute walk away or so Google Maps reckoned. Despite two pints of strong cider sloshing around my insides, I was a couple of minutes early, even having time to stop at a shop for a sausage roll and a bottle of Irn Bru. My only omission was getting pictures of the outside of the ground but I felt my pre-match justified that. The game kicked off a minute late in support of mental health, an imp issue. A match report of the game is below as time constraints prevented me from doing my own. 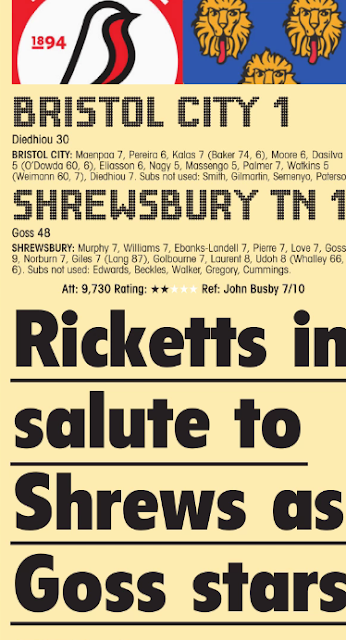 ASHTON GATE was a decent sized all-seater stadium for the level on my first four visits. It was looking a bit tired in places though. Visiting fans have always sat in the same end - the Wedlock stand, behind the goal. On my latter visits it was been split between home and away fans which creates a great atmosphere. The only drawback is there are no backs to the seats, but it doesn't really make any difference as everyone stands anyway. High;ights of pre-match in the past for me included having a pint of traditional cider in a local pub and a Chinese takeaway on an evening visit. 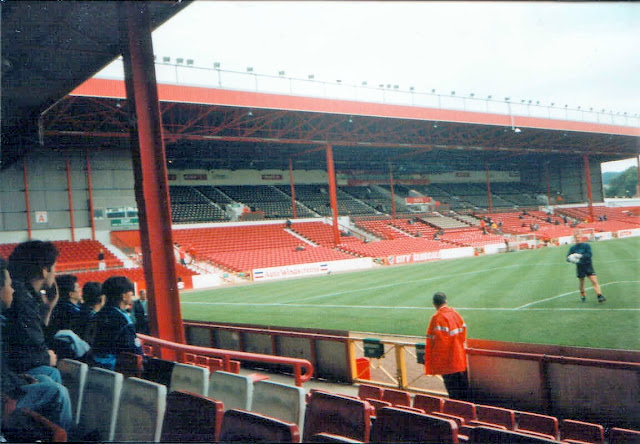 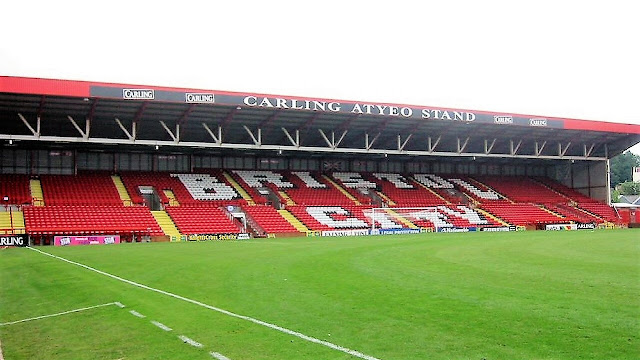 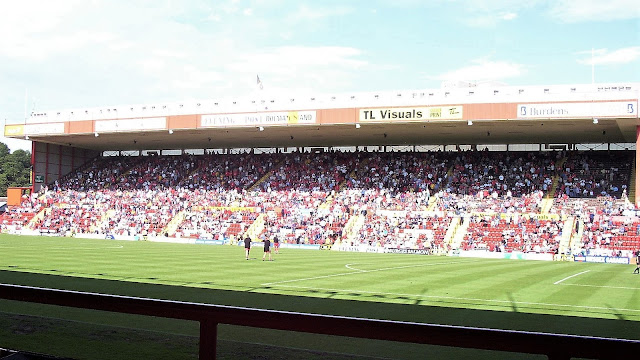 Since my previous visit, Ashton Gate was completely transformed into an excellent 30,000 plus capacity stadium. Only the away stand remained the same from my previous visit. The Lansdowne Stand is especially nice with padded seats, though most are the standard plastic.

Food and drink facilities are good in the home end, separate stalls for burgers and pasties and even a cider bar with a choice of four ciders from Thatchers. Further afield is the excellent Orchard Inn with over 20 ciders and basic bar snacks. This is 20 minutes away but closer are a number of decent outlets including The Burger Joint, The Bristol Beer Factory and plenty of other places worth a visit. 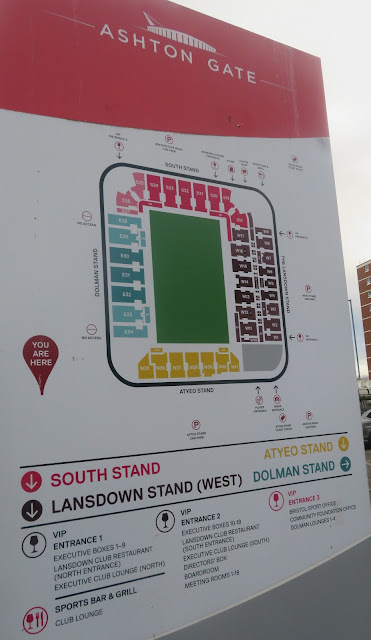 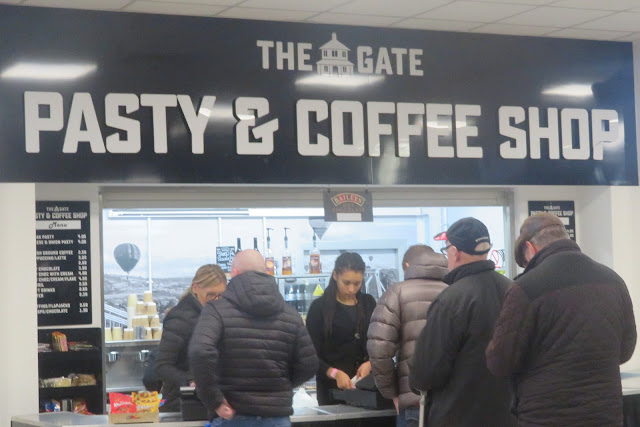 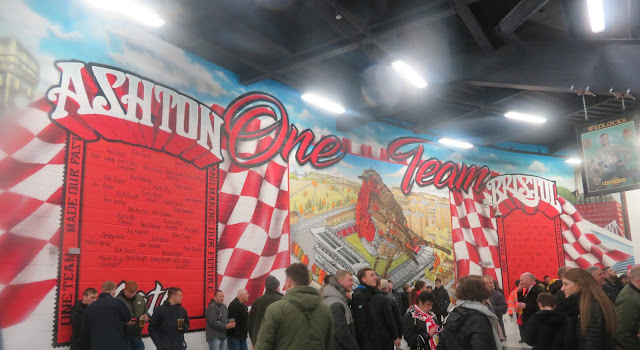 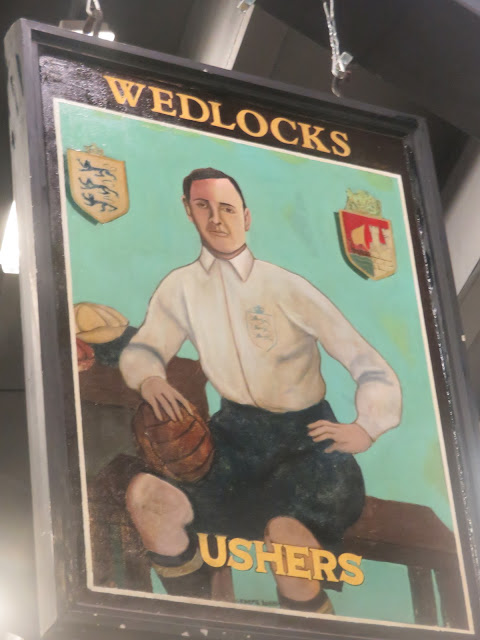 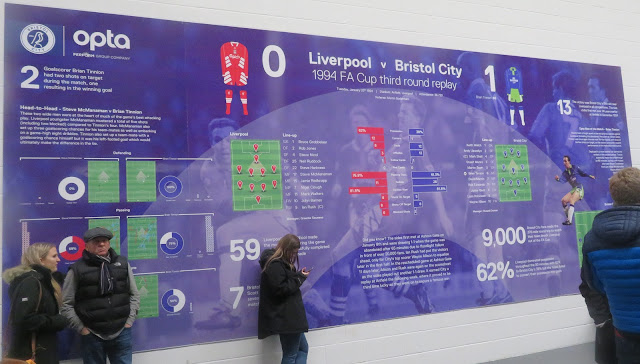 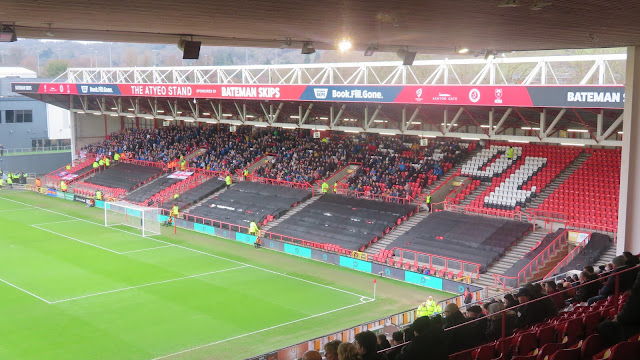 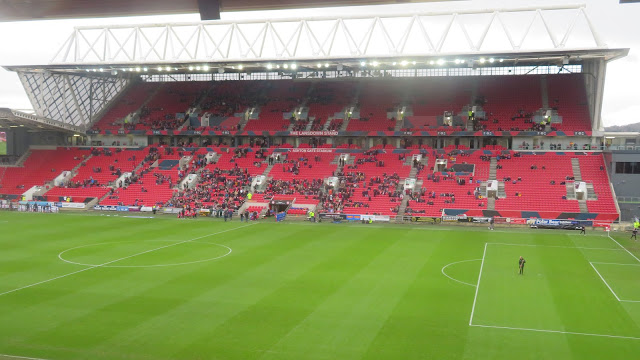 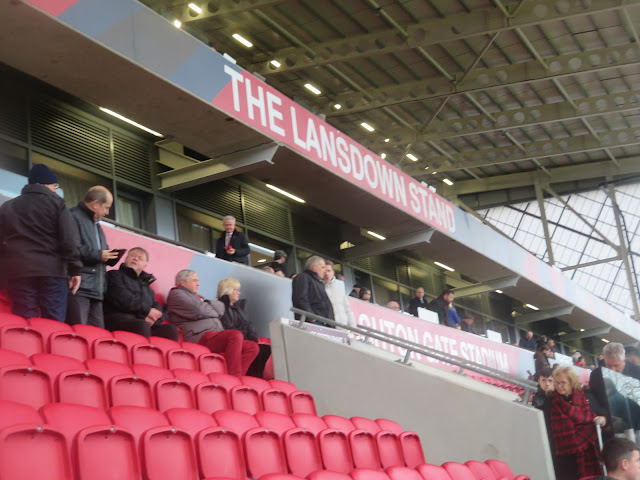 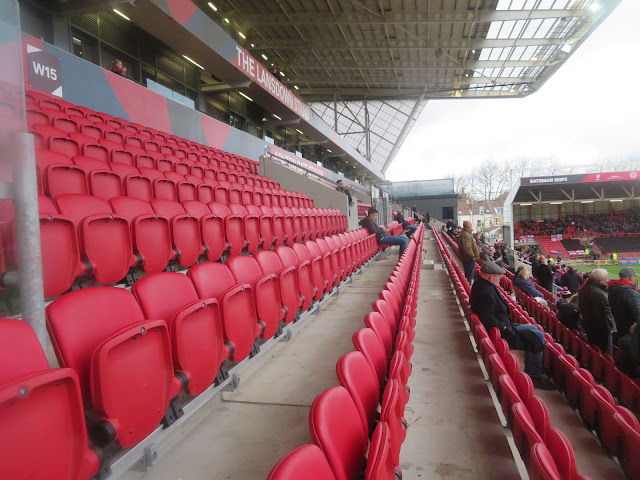 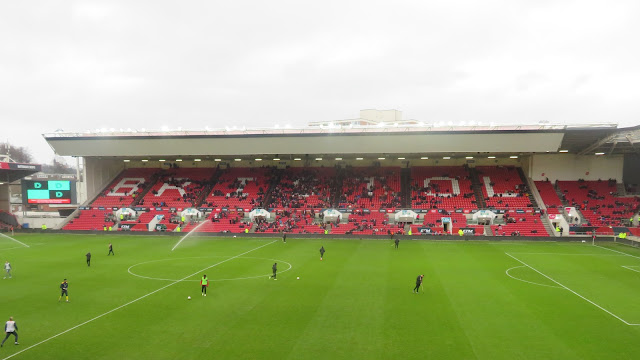 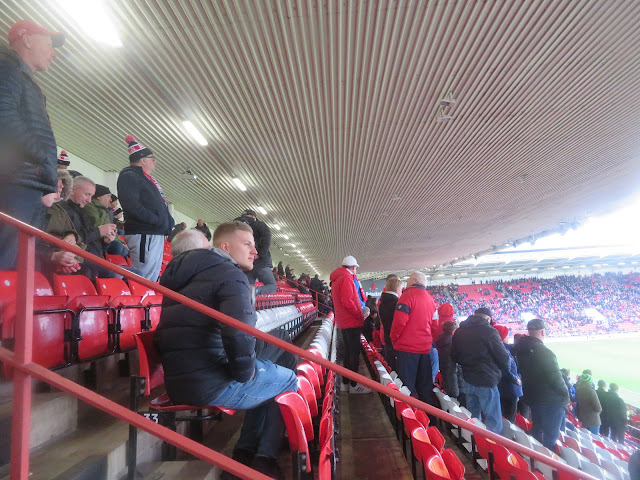