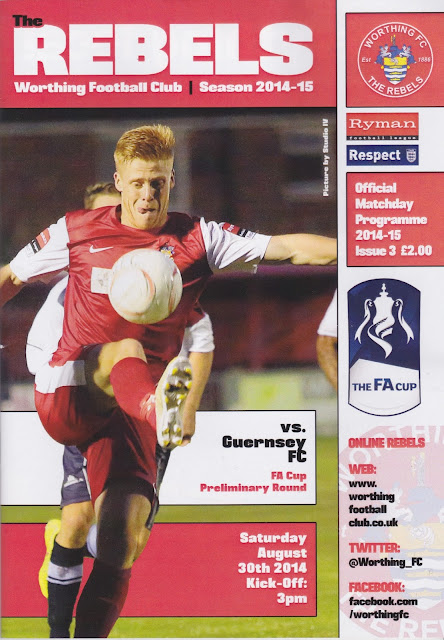 Worthing FC was formed in 1886. They spent their early years in the Sussex, Corinthian and Athenian leagues before joining the Isthmian League in 1977 and they have remained in and round its divisions ever since. They won the 1st Division in 1983, then has 2 successive runners-up spots in the Premier Division, narrowly missing out on promotion to the Conference. It must have been due to ground issues, or not wishing to take the promotion as in the latter of those seasons, my team Wycombe went up, despite finishing in 3rd place behind the Rebels and champions Sutton United. That was under the management of Barry Lloyd, but he left to join Brighton, and the team slipped down to Division 2. Since then, they have worked their way back, reappearing in the Premier Division from 2004 -2007, but since their relegation they have been in Division 1 South, last season  finishing 15th

Their best year in the FA Cup came in 1982 when they got all the way to the 2nd Round, before losing to Oxford. They last reached the 'proper' stage of the FA Cup in 1999 when they lost to Rotherham. Last season was slightly less pleasing on their part, with them losing 5-1 to fellow league opponents Faversham Town. They had a good run in the FA Trophy in 2004, getting to the 4th Round and not too far from a Wembley appearance. The same could be said of the FA Vase in 1979 when they got to the 5th Round. Cup honours include the Sussex Charity Cup, winning it on 14 occasions, but not since the 1950's. The nickname of 'The Rebels' comes from when they resigned from the West Sussex League over a rule change in 1920, joining the Sussex League instead. Currently in charge is Adam Hinshelwood who was an absolutely brilliant defender for Wycombe, despite only playing 13 games, he is well regarded and could have gone on to be a great.

As with the Friday night, my regular groundhopping pal Anwar would be unavailable due to him going to Derby. I, therefore, needed a game for myself. The Northamptonshire derby between Cogenhoe United and Kettering Town looked mouthwatering, but I decided to save it for when we could both visit, and instead head south to Worthing v Guernsey. This had the added benefit of being already ticked by Anwar, and on a personal note, it would be the ground right next to where I got my favourite dog, or to be more precise my family did. I was really too young to remember our first dog, Cass, an Irish setter. But we got Maisie, a Springer Spaniel, from a pet shop just up the road from the ground, going towards Lancing. She was a great family pet and we had her from 1993 to 2006. I remember the day we got her, and while the paperwork was being sorted, we went and had a look at Woodside Road where Worthing play. I don't remember much about the ground, but I do recall getting a really old Topical Times football annual from a nearby charity shop for 50p, funny how you remember random stuff, isn't it. 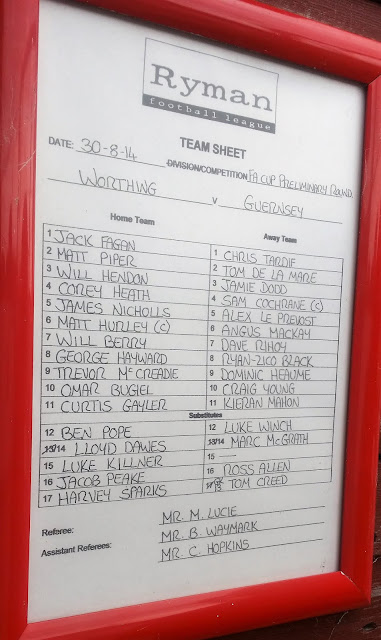 On the day I woke up at around 8. I watched some of last nights TV, had a bath and transferred last nights photos onto my PC. Leaving just after 10, my sat nav informed me there would be a short delay on the M25. That turned into half an hour. I wanted to have a bit of time in town, so tried to get a shift on along the A23. There were a couple more delays in built-up areas, but I got to Worthing FC at 12.30. I walked into town to Anchored in Worthing, a very nice micro pub that my prior research had told me served 2 ciders that I had not sampled before. Before I did that though, I needed cash but had to walk all the way up the other end of town before I found a cash machine. Back at Anchored, I had myself a pint of Black Pig Perry, and as the place was so small, sat on the table outside and watched the world go by. It was very pleasant on a warm afternoon and it was nice to chill with a couple of nice tipples. The helpful owner also allowed the use of his free wifi, which helped as the mobile signal was very slow data wise. That meant I was able to watch the Burnley v Manchester United relegation clash on my iPad and it worked perfectly. The second half was JB's Medium Cider, a lot dryer in contrast to the Perry. It was a  really dog-friendly place too. I walked back to the ground, stopping to get some chips. I was hungry, so went to a shop, got myself a Samosa, a box of chocolate fingers and a bottle of Irn Bru. I then paid to get in, £8, plus £2 for a programme. I got some pictures and was still hungry, so I got a Sausage and Chips from the tea bar, before getting some pictures of the ground.


It was a pretty even contest, but overall Worthing merited their win, Guernsey will bemoan some of their finishing, but it was a Trevor McCreadie brace that saw the home side through. They now face a tricky trip to Isthmian Premier side Dulwich Hamlet in the 1st Qualifying Round. After the game, I drove home, but not before stopping at the 2 Wycombe cinemas to do some audits on their adverts. It took me a couple of extra hours, but I used the money I earned towards the game, seen as I did it whilst on the football trip. I then went home, had a couple of pints and watched Match Of The Day before going to bed at half past midnight. 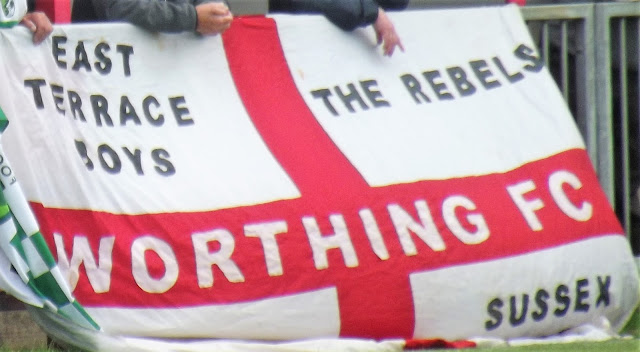 WOODSIDE ROAD is one of the better grounds in the Isthmian League. The main stand is huge and offers great views and looks like it seats more than the 500 capacity that the internet tells me. Probably around 1000 of the 4000 capacity is under cover. The bar is nice and modern and has Thatchers Gold cider on tap. The tea bar is good too, although there was no club shop that I could see. Overall, well worth a visit, although I'd have liked more time in town to get something better to eat, after going to the pub. Everyone was friendly and the prices seem standard for the Isthmian 1 South. 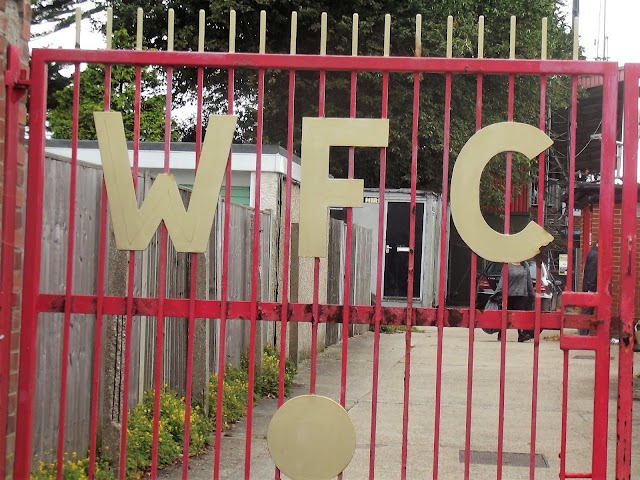 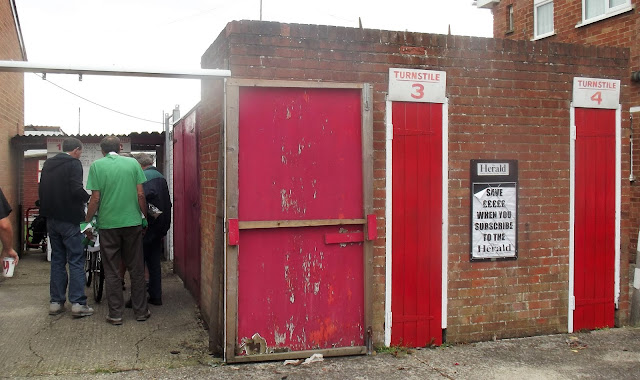 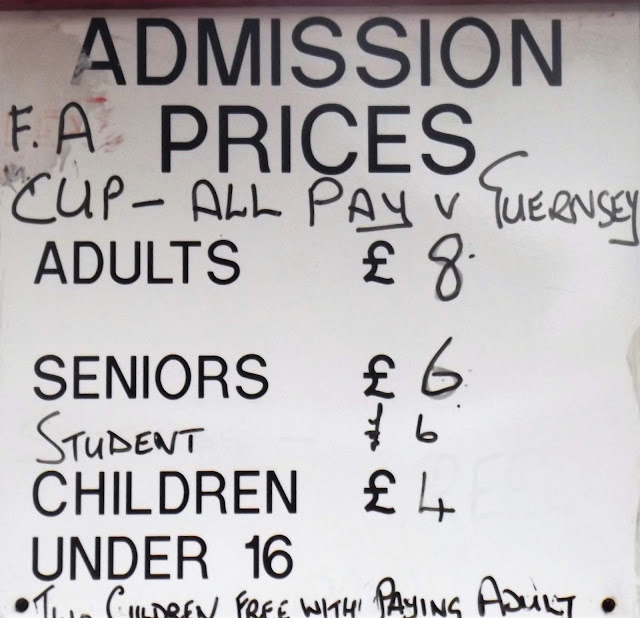 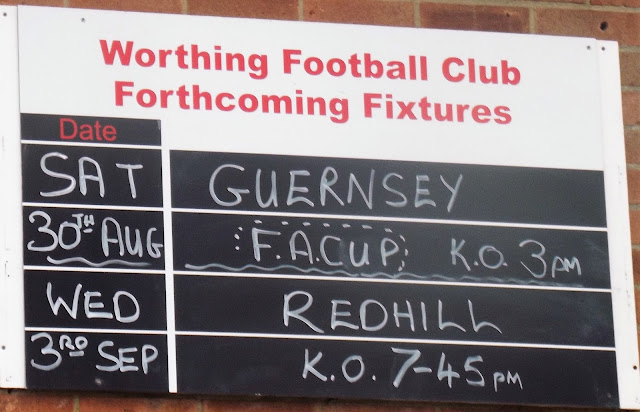 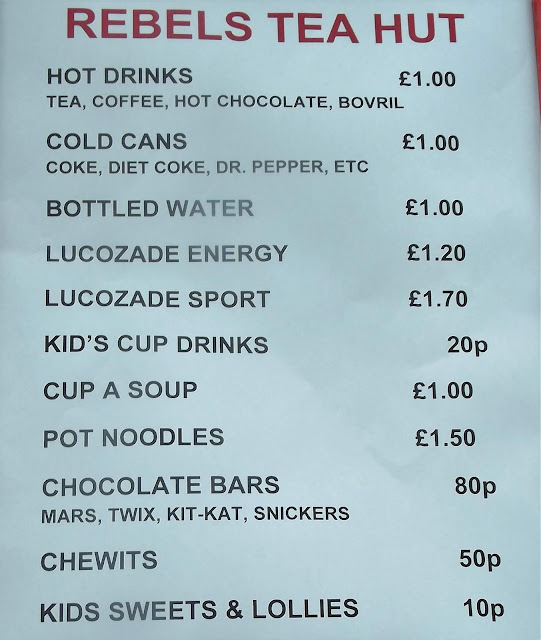 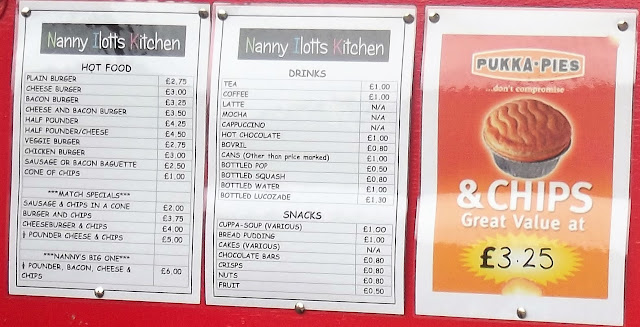 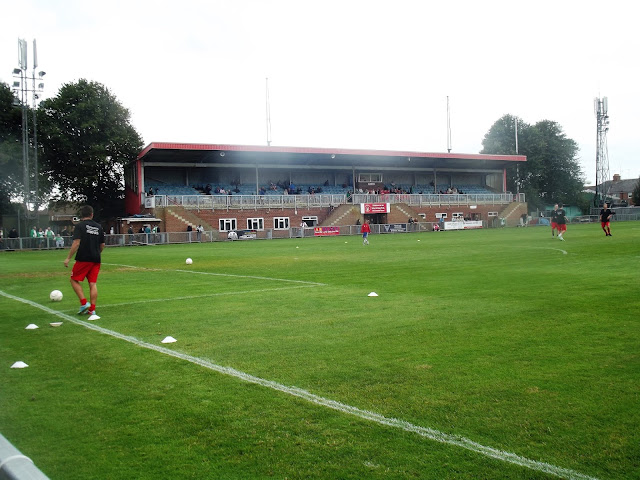 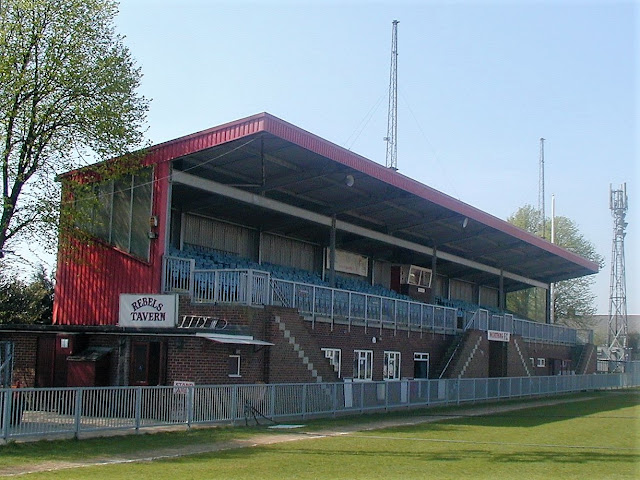 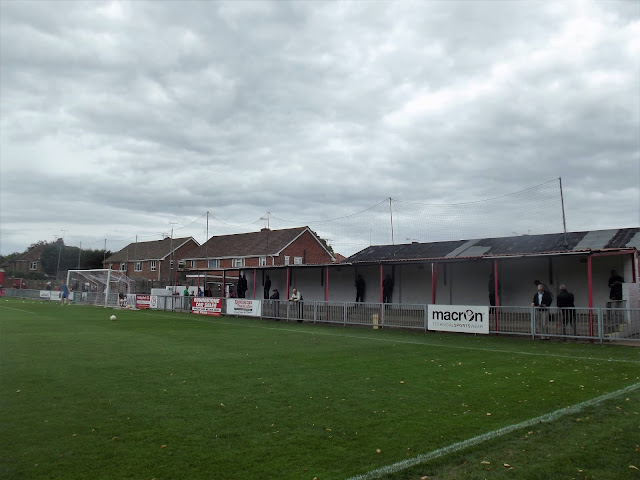 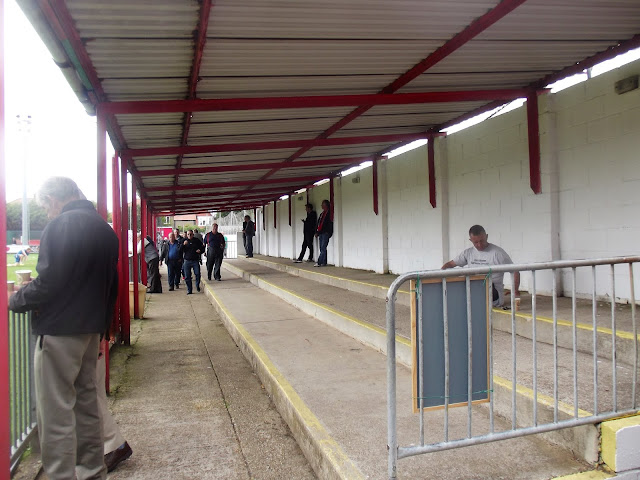 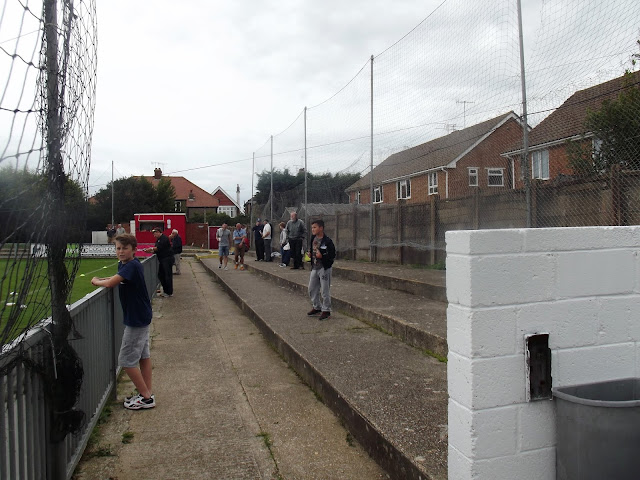 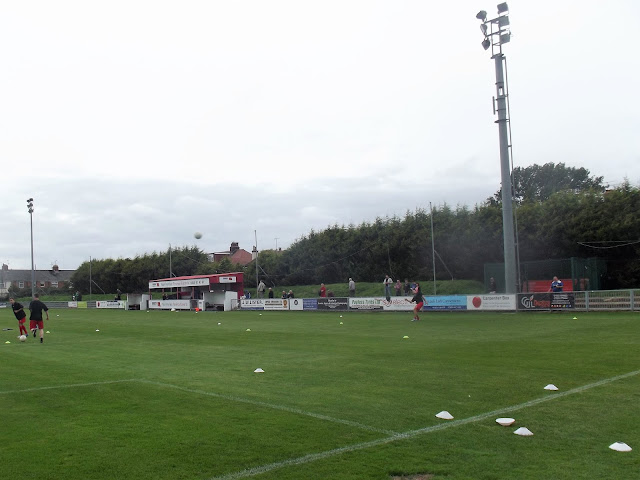 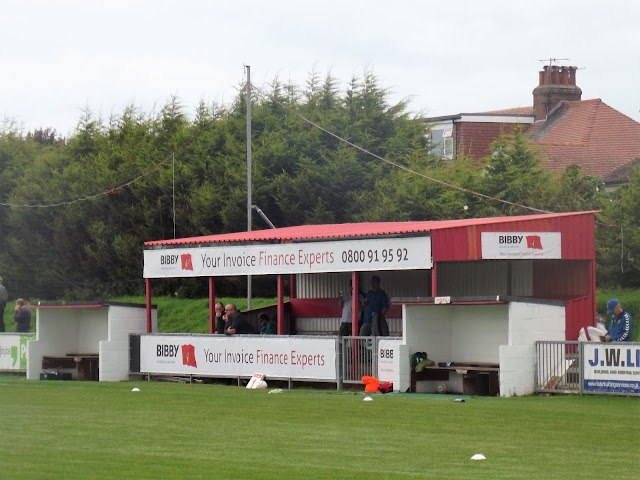 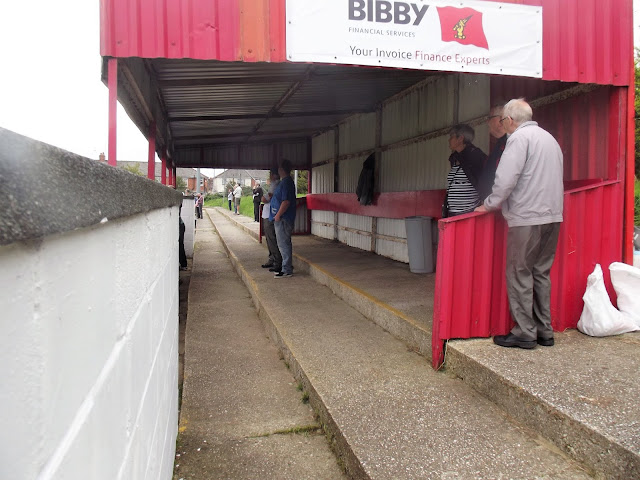 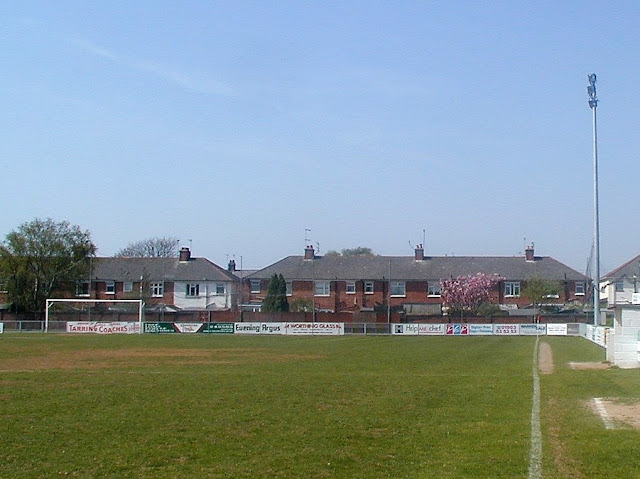