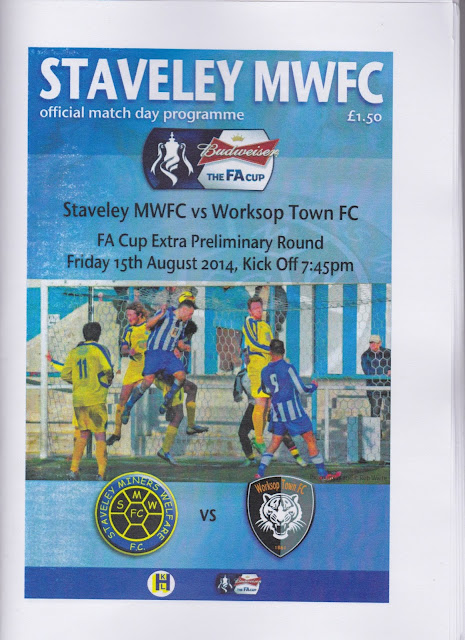 Staveley Miners Welfare FC was formed in 1962 under the name 'Nags Head'. They only started playing Saturday Football in 1989, joining the Central Midlands League in 1993. The rapid progress was continued when they joined the NCEL in 1997.  They finished 2nd in its Division 1 in their first season and gained promotion to the Premier. However, they struggled to cope with the step up and lasted 3 seasons before succumbing to relegation. They took a while to get back, being champions of Division 1 in 2011. They have coped a lot better, staying well clear of relegation since their return to the Premier. Last season's finish of the 17th was the lowest since they returned, but they were still 23 points clear of the drop zone. As for tonight's competition, they had a great run in 2011, beating Winterton Rangers, Goole and Pickering Town before succumbing 3-0 to that year's Conference North winners Hyde. That year also saw a run to the FA Vase Semi Final, however, the Northern League's domination of the competition at the time prevailed and they lost over 2 legs to Dunston UTS by a very narrow 3-2 scoreline. That vintage year also saw them finish 5th in the NCEL, their highest ever finish to date. 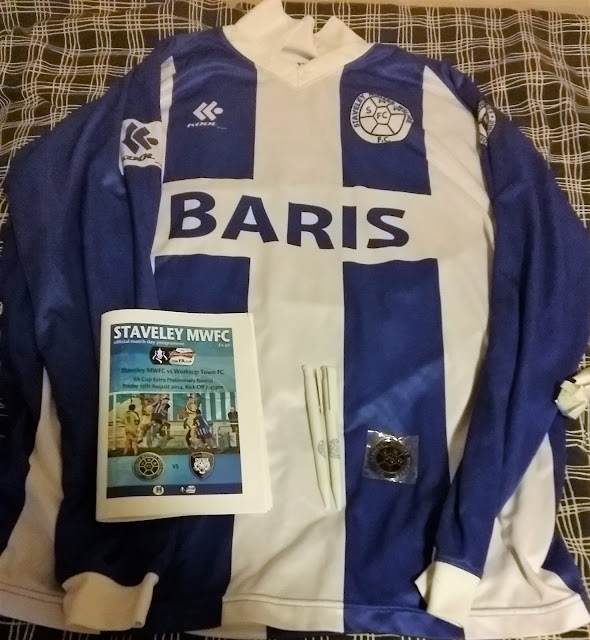 I'm a huge fan of the FA Cup early rounds and so I was pleased when some games were announced on a Friday night. Sadly though, they were all a fair distance away, but the bonus with Staveley, near Chesterfield, was that I would be able to meet people there. Norwegian groundhopper Anders had the match cemented into his plans, as he was over here for another fortnight. Also Sheffield United and Worksop Town fan Seb said he would be there, and Chesterfield fan Luke said he would try and make it too. I'd actually been to Inkersall Road, tonight's venue, to take pictures in September 2007, on the way to Chesterfield v Wycombe, which if I recall correctly, we lost 2-0. It had earned favourable reviews from groundhoppers, so I was looking forward to seeing a game there. Especially as it was part of my favourite step 5 league, the NCEL, that I fell in love with when I went on a groundhop in 2012. I was glad of a fairly easy day at work on the day of the game and was out at 11.45. The night before, I had been out and as well as a few pints I had gone to the Sausage Tree in High Wycombe for my brothers birthday. I indulged on the exotic meat platter and had Camel, Horse and Zebra, which were very nice, and strange meats are something I am always up for trying. 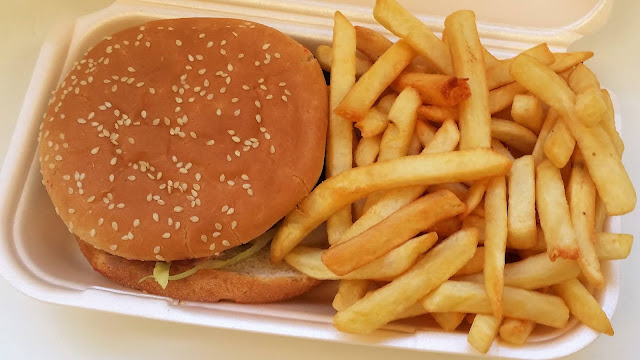 I relaxed at home for a few hours, having a bath and some lunch and leaving to meet Anwar at 3pm. I got to him at 3.30, and soon enough we were on our way. It was slow progress out of Aylesbury and into Milton Keynes, but worse was to come. The M1 was stop-start all the way up, thanks mainly to roadworks, which as usual had big swathes of tarmac fenced off and no sod working on them. There was sitting traffic everywhere, and it was very frustrating. It was also annoying when the mobile internet was at a frustratingly slow speed so I couldn't check anything while we were stopped. Eventually, after an hour and 10 minutes delay, we were parked up in a nearby street. It had pelted it down on the way up, so we were a bit concerned that the game may be in danger. But it was nice and busy, and so our minds were put at rest. We were unsure what the food would be like in the ground, so we sought out a local takeaway, chatting to some locals on the way. Star Pizza was the venue, and they did a very good Chilli Burger and chips, a nice bit of salad in it too to keep the doctor happy for £3.70. 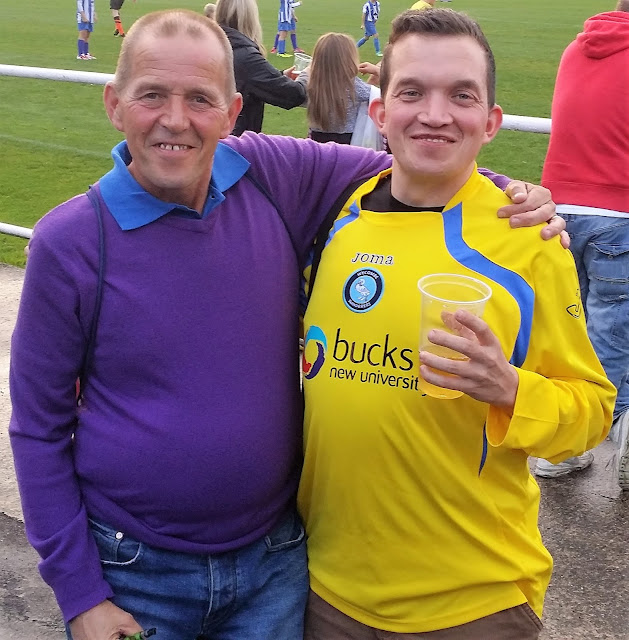 From there, we walked the 5 minutes to the ground and paid £5 to get in, plus £1.50 for an excellent programme. We took a look around the ground and I got some great pictures of the stands. I was pleased to see a friendly dog, but then even more pleased to see 'Mick The Owl' who posted on the Gasroom a few years back, when Wycombe and Sheffield Wednesday shared a league. Hard to believe now, I know, but he came to Chesterfield and met the Wycombe fans the following season, and everyone got along famously. We had a good chat and got a picture together, but then it was time to watch the game. A brief rundown of the game (I will try and add in a match report later, as I'm not really a fan of writing about the football itself) Anyway, it has the home side who had the best of the opening period, but then Worksop took over and were much the better side in the first half. The second period was a different story, however. Staveley must have had a right royal rollicking, as they came out the second half a different team, and had much the better of proceedings. Ellis Wall opened the scoring with a deft chip over the keeper and a well-worked free kick resulted in the second scored by Jordan Eagers. Another view of the game here can be seen on the epic The Real FA Cup website.

At halftime, we went to the club shop. We were given a really smashing welcome from the owners of both shops (amazingly Worksop had a stall there too) But I said I'd wait till I got to their ground to get something from them. Instead, I went to the Staveley Miners Welfare Shop, and got an old shirt for £3, complete with league badges and number. I also bought a keyring and a couple of pens. After that, I went to the bar to get a pint of Strongbow. I'd been treated really well by the club so far, I'd not been charged too much like a few clubs do. When you get a good welcome and good value, it makes you want to spend more. I stood and had my pint with Anders, who had come all the way from Norway to see this game and Alan Savage, who had made a slightly shorter trip from down the M1 at Ilkeston. We joined a Peterborough fan and talked about our favourite grounds and the many merits of the NCEL. After the game, I said my goodbyes, having had an absolutely superb evening. It had everything I love about the NCEL, and after singing chapter and verse to Anwar about the league, I was glad when I sold it to him on the first visit. In fact, the night had everything I love about football, friendliness, cooperation and community. I dislike a lot of things that happen higher up, even at Wycombe's level, which generally retains some dignity, I despise MK Dons, and everything that that despicable club stands for, and how the spineless FA let them get away with it. I dislike the high prices some clubs charge, though I pay £10.50 a game for a seat on the halfway line at Wycombe though my season ticket, which is a damn good deal in my book. I dislike the overbearing authoritarian approach to fans and the tightly enforced segregation. In my mind, if you can't stand next to a fan of a different team without starting trouble, you should be banned, but there is no reason to treat everyone as guilty. Anyway, rant almost over. We got on the motorway and went through 10 miles of horrible average speed cameras which annoy me no end. We made good progress, however, and I dropped Anwar in Aylesbury just before midnight, getting home myself 20 minutes later. 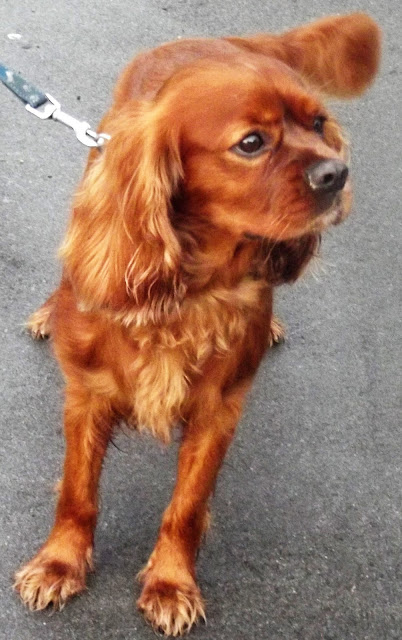 INKERSALL ROAD is a cracking ground and would be good enough for the Conference North, no issues. Everything had the club logo and the blue and white stripes on and it looks great. There is a seated stand holding 200 along the side, along with some open terracing. Behind both goals has covered terracing, whilst the other side is open and also houses the corner bar and tannoy box. The end where you come in houses the bar and the tea hut, The bar was nicely done out and had a great selection of drinks at good prices. It had Sky for TV football too. The tea bar looked a cracker too and I regretted eating beforehand, even though what I had was nice. Finally, the club shop had a great range of stuff, especially considering they were step 5. But most of all, the club were amazingly friendly, making everyone feel very welcome. This is the perfect groundhop, probably my favourite so far and should be at the top of anyone's list. Even if anyone is sceptical about hopping, take them here, and they will either be sold on it or be beyond hope! 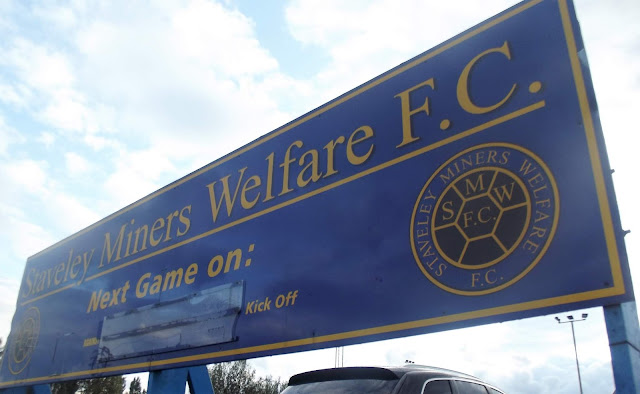 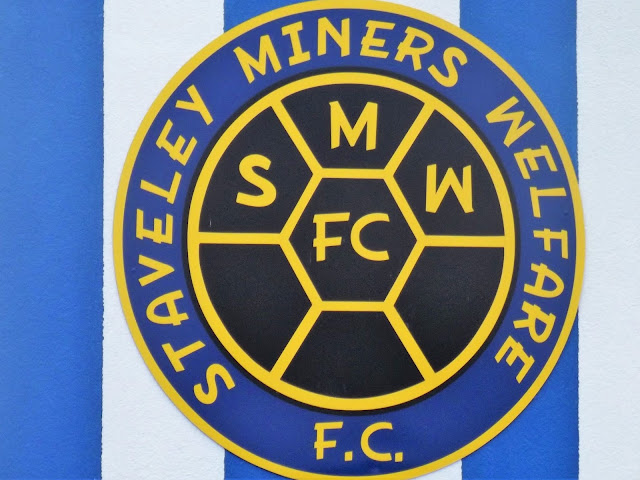 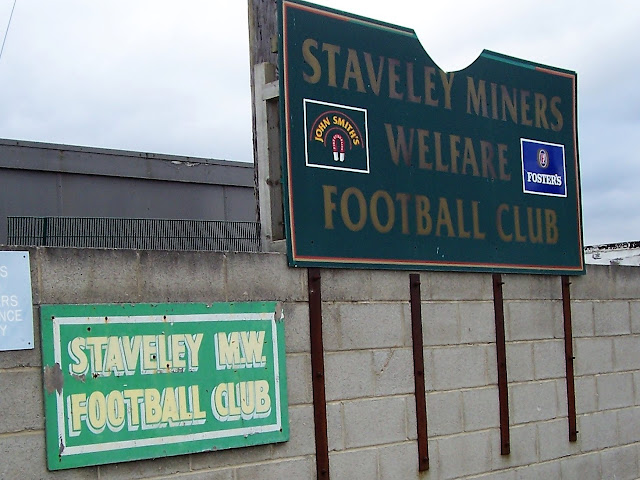 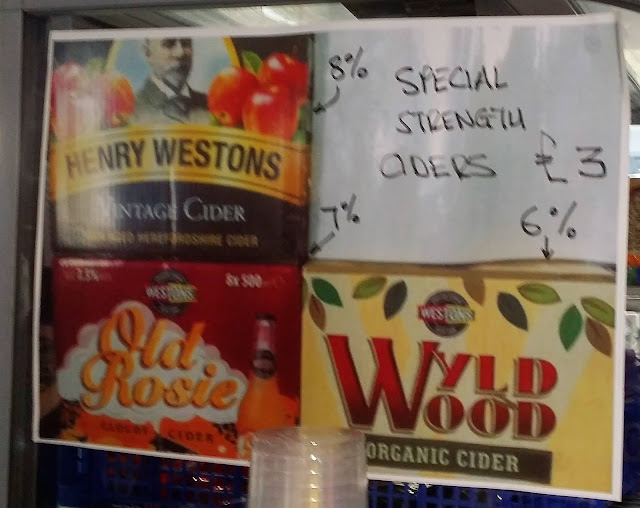 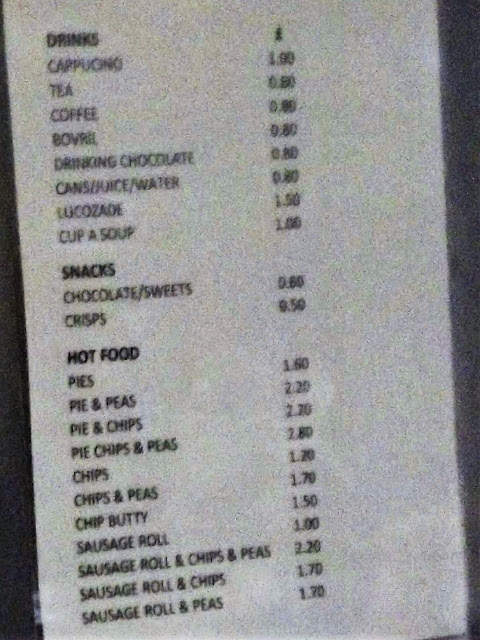 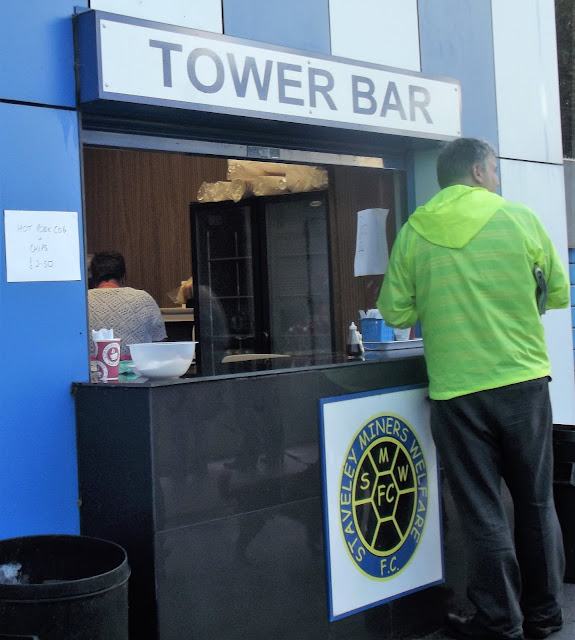 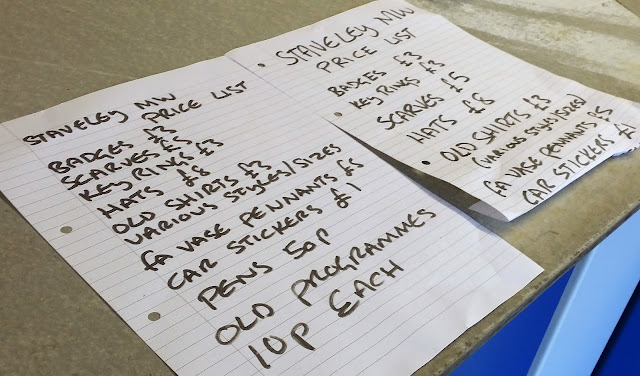 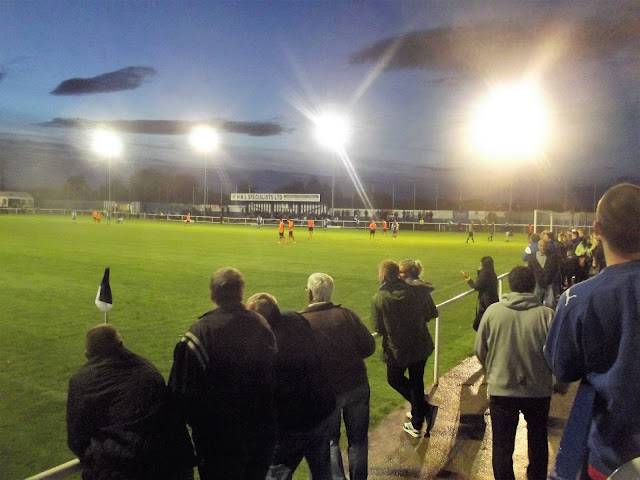 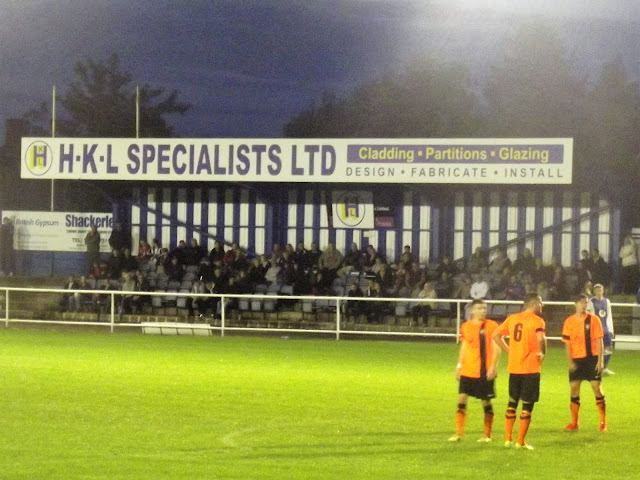 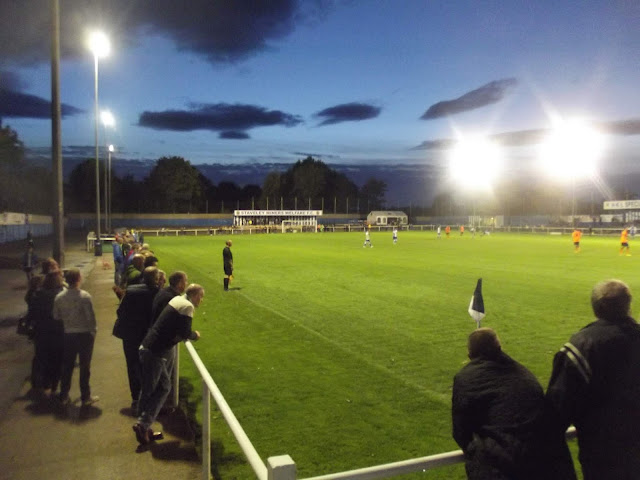 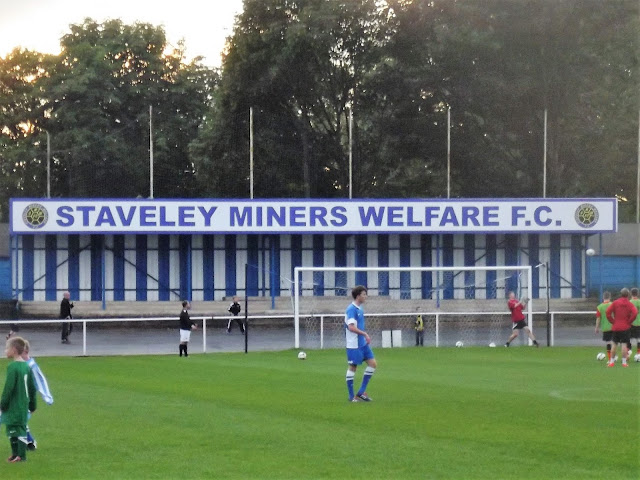 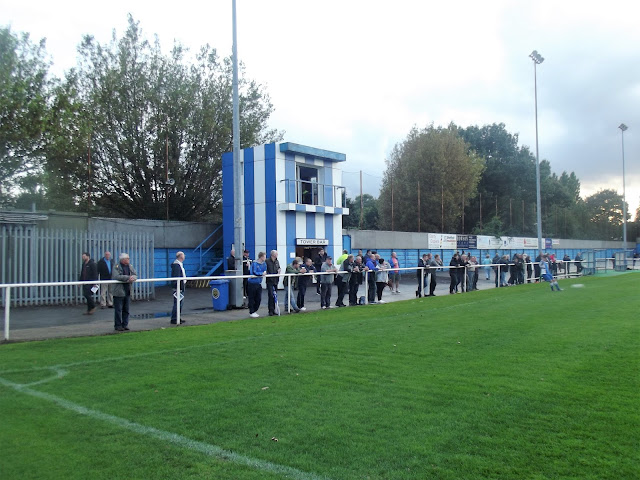 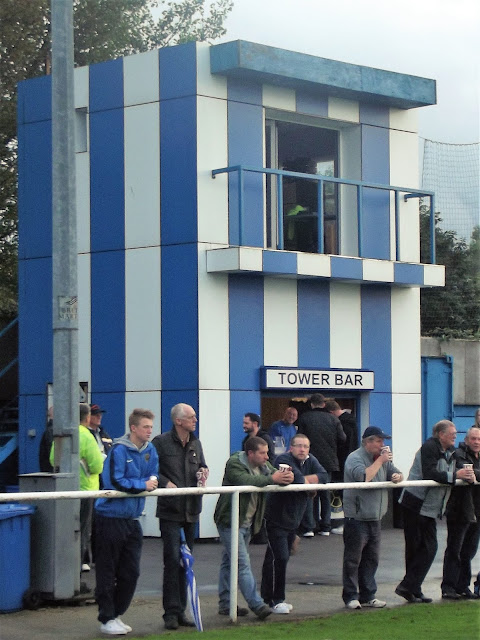 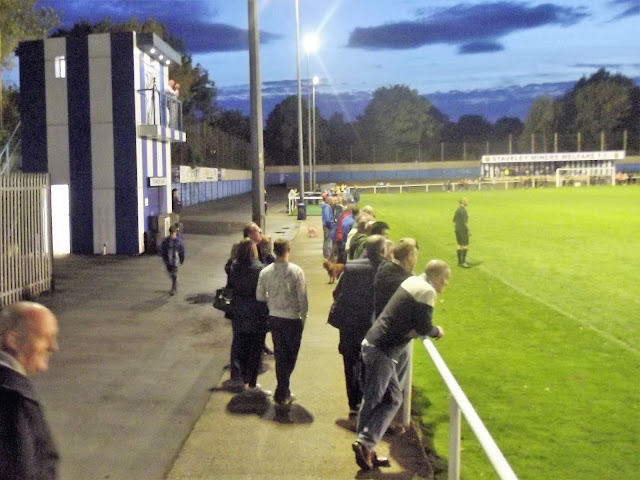 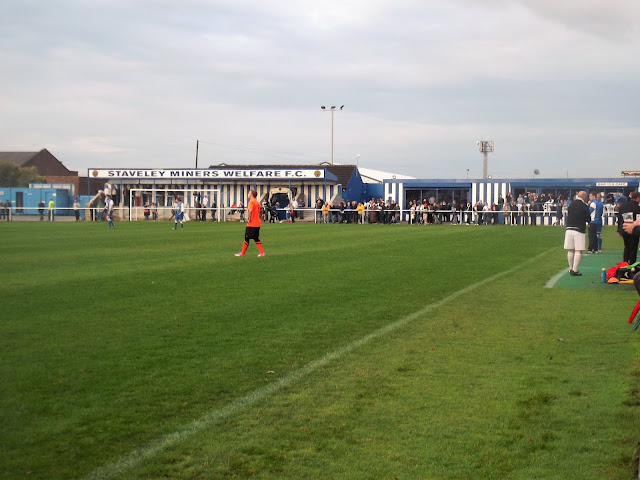 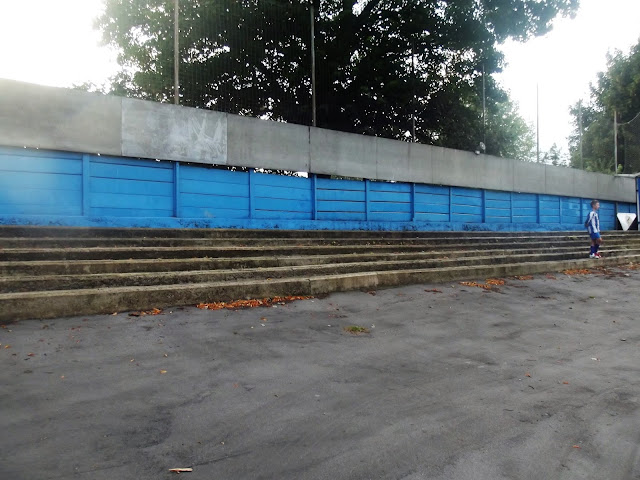