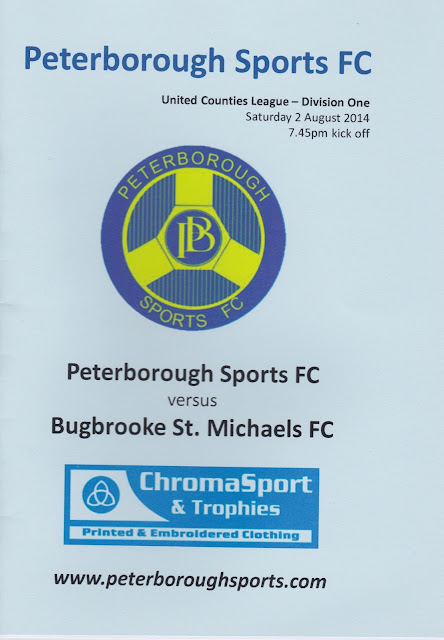 Peterborough Sports were founded in 1919. They played in local leagues up until 2012 when they were accepted into the United Counties League Division 1. They had a 16th placed finish last season. The club won the Northants Junior Cup in 2007, as well as Northants League in 1920. In the Peterborough & District League, they won the Division 3 South in 1976, and Division 3 in 1981. They were Champions of the Premier Division in 2007.

The final match of my 5 game series in the groundhop would be at Peterborough Sports in the United Counties League Division 1. It had been a ground that I had been to take a look at on my way up to Grimsby last season and I had been pretty impressed, especially as it was at step 6. I was looking forward to returning for a game and was pleased when they were named as a team on the hop. The one other thing that I did remember was that parking was a bit tricky, and that was just for a flying visit to take a few photos. After leaving Netherton it was only a 2-mile journey to Peterborough Sports. I was there within 10 minutes. I parked up and sorted out what I wanted to take into the ground. First stop was the clubhouse for a pint of Stowford Press, which was priced at a very reasonable £2.75. I got it in a plastic glass and sat and drank it in the stand whilst typing my blog. It was a really nice bar to be honest, the best out of the clubs that I had been to. It had plenty going on and with the music and adverts for Karaoke and prize draws, it felt like I was on holiday. After I had finished my pint, I went in search of food. I found it in Southern Fried Chicken and Chips for the decent price of £2.50. I eat that and went back inside the ground. 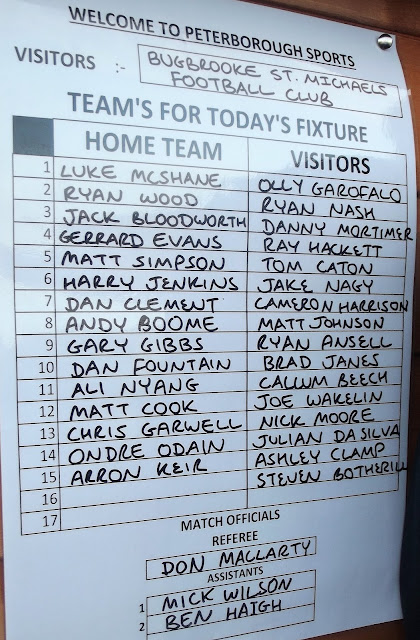 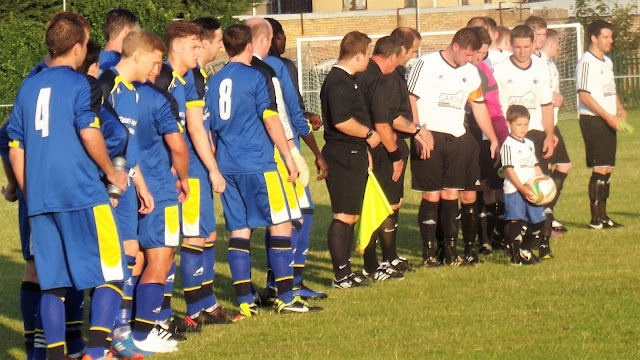 The game itself was not bad, the home side, as in every case on this hop were on top. But it was Bugbrooke St Michaels who took the lead on 20 minutes when number 9 broke clear of the defence and finished with aplomb. They were the better side actually, especially in the first half. Peterborough Sports equalised with a header though, and were probably the most likely to win the game, but alas it was not to be for them. It had been a good groundhop overall, and credit must go to all the organisers and the clubs for making it run so well. I had a drive home of course, and though I should have been tired by that point, I wasn't at all. I listened to Mike Graham and Mike Parry on TalkSPORT on the way home, always a great listen and tonight was no exception, as they debated various subjects, with Parry's views always amusing. It was a pretty decent journey actually, in all it only took 85 minutes and would have been even less had I not got stuck behind a really slow driver the last 5 miles before home. I was still wide awake, so I grabbed myself a bottle of cider to drink whilst watching YouTube and Coronation Street. In fact, I didn't drop off till nearly 2am, and with me up at 4am for work, I didn't feel at my best the next day, as you would expect. 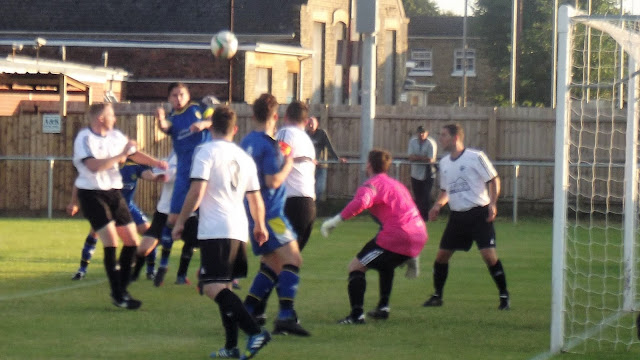 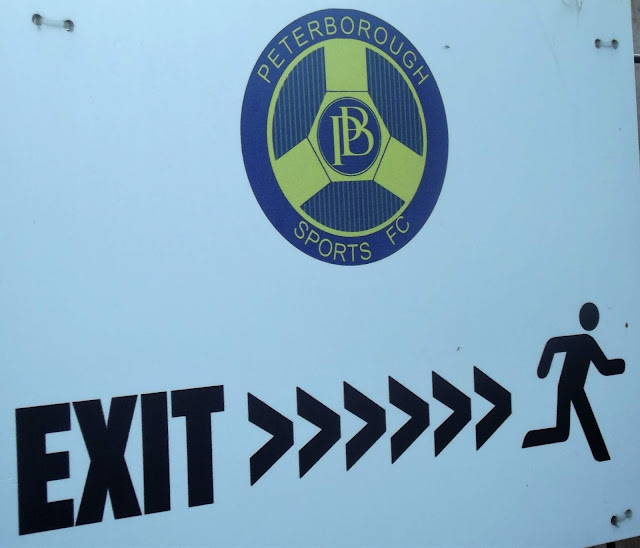 LINCOLN ROAD is a smart new venue. I originally visited it in November 2013 on my way up to Grimsby and was impressed by the smart venue. I heard that it was knocked up in little more than a few weeks so that they could get into the United Counties League. While you can tell this in some places, it certainly isn't your typical metal stands arena job. There is just the one stand, holding around 200 fans in seats. Though the rest of it is open to the elements, it's a really nice design with wood panels rather than concrete forming the walls.

The tea bar was good value and decent food when I went. The clubhouse was even better, really nicely done out, and with a decent range of drinks at reasonable prices. The club shop had a nice range of items, but none cheap enough for me to buy. If you want more choice food and drink wise, there is a big road near the ground with lots of takeaways on it. 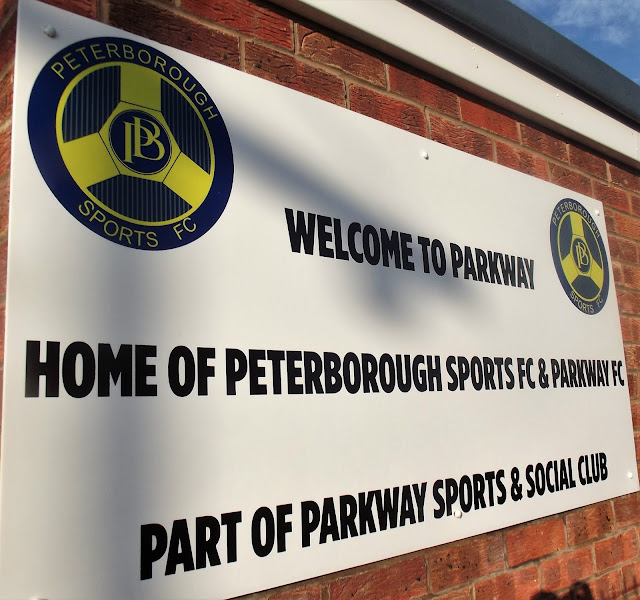 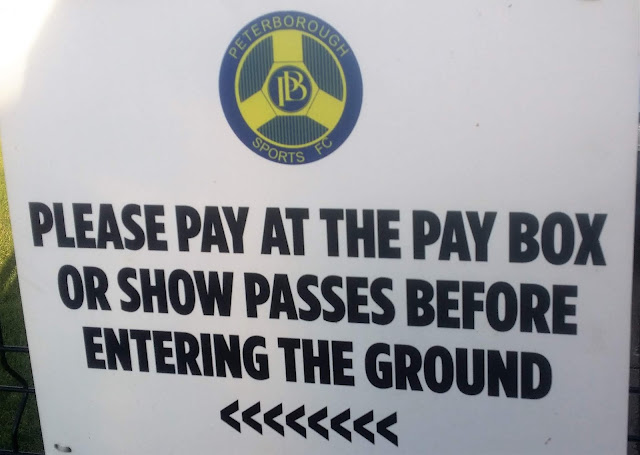 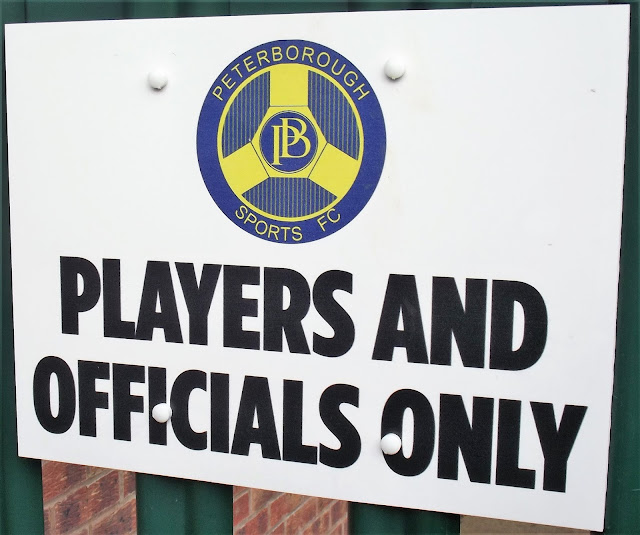 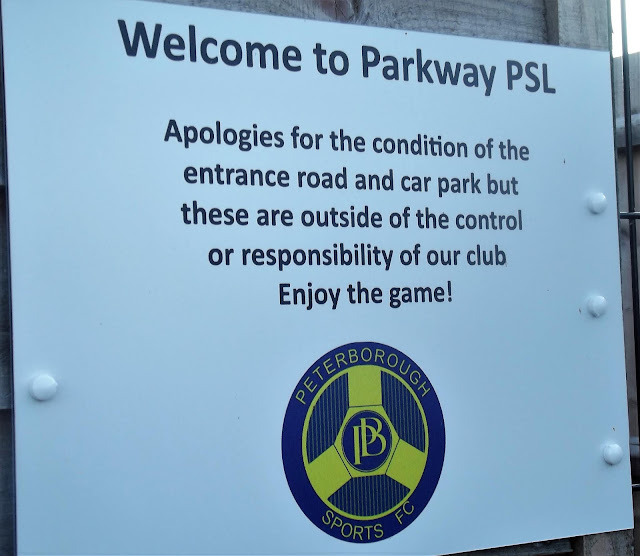 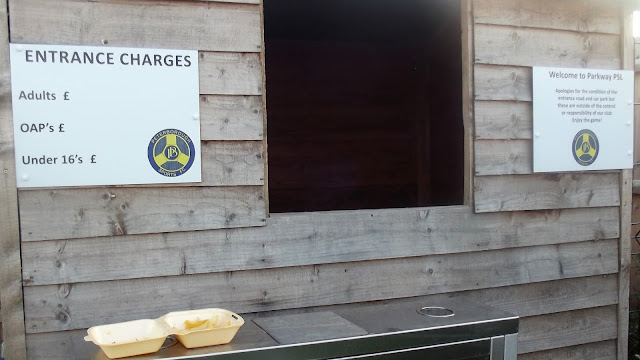 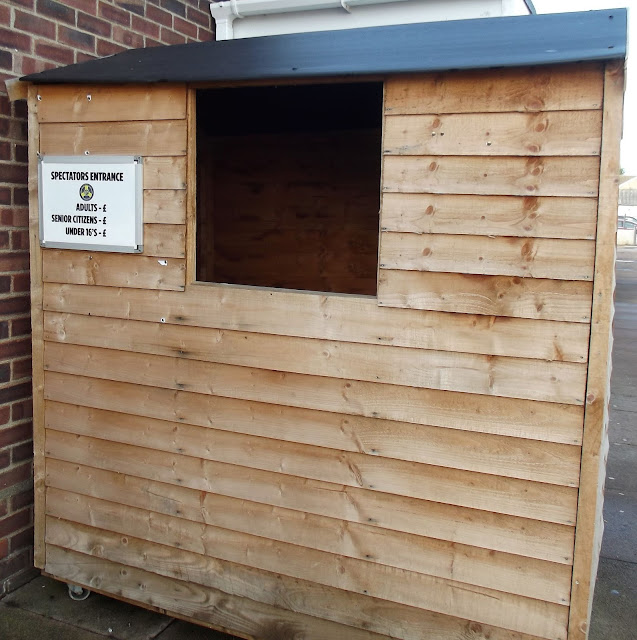 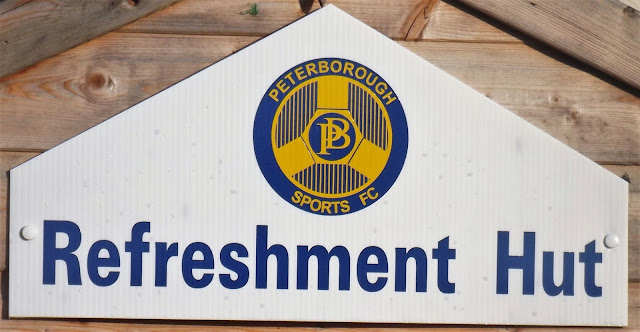 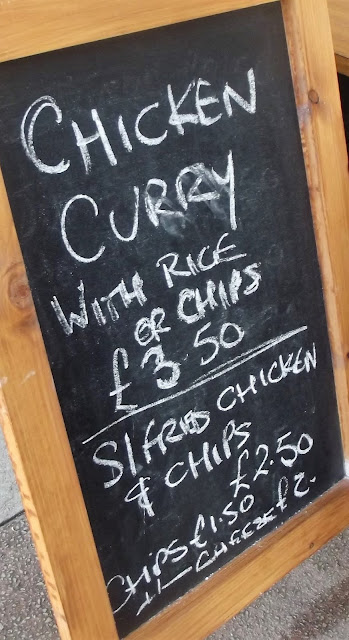 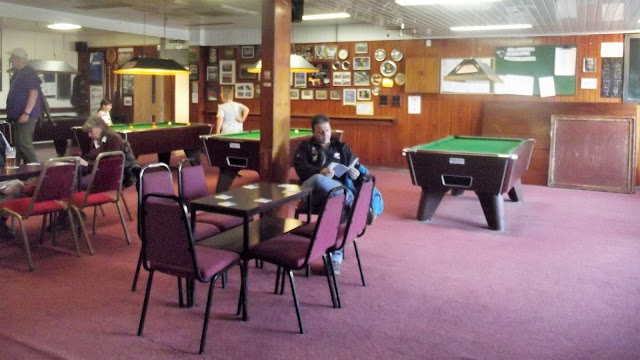 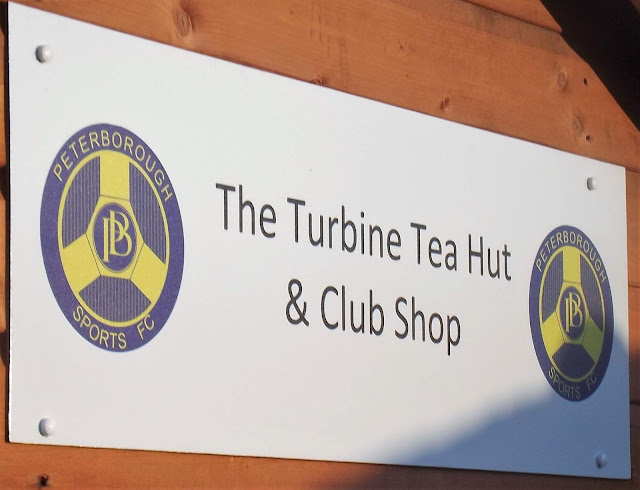 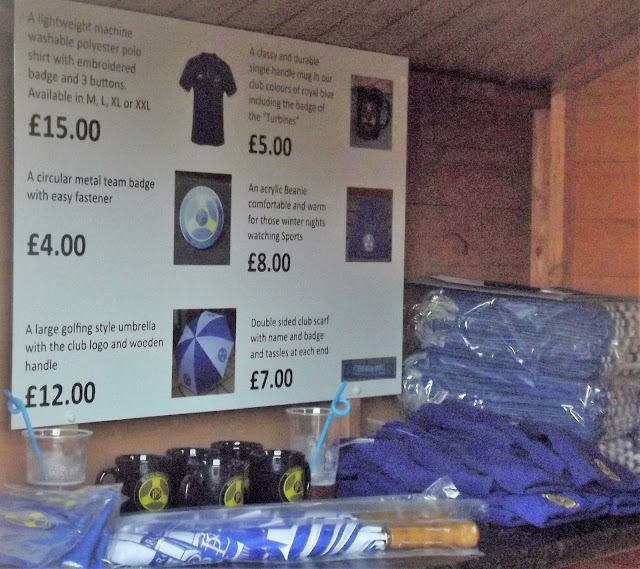 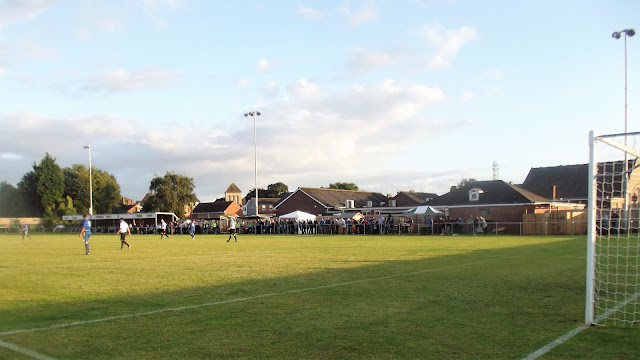 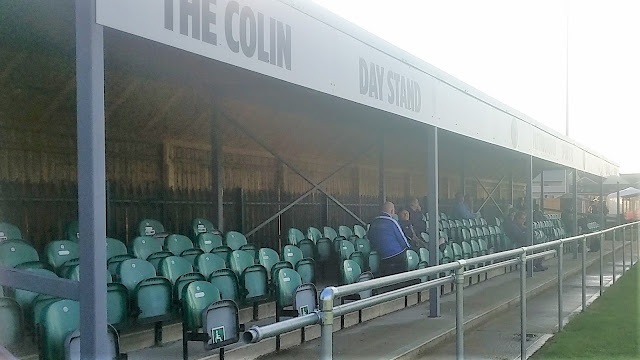 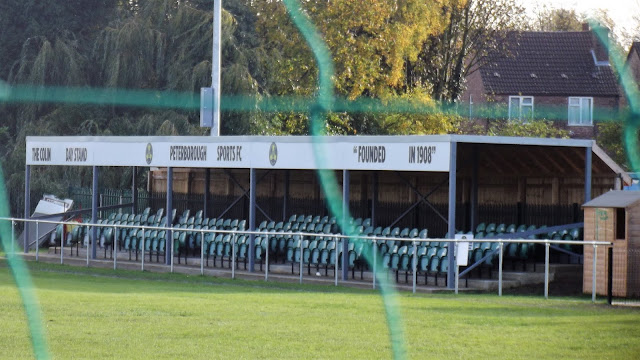 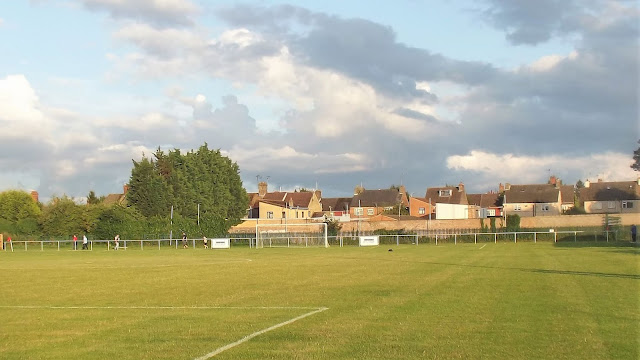 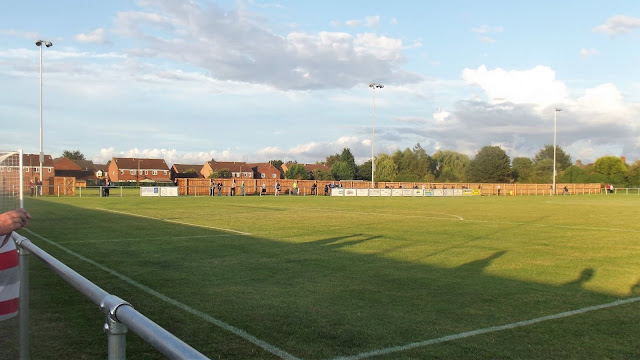 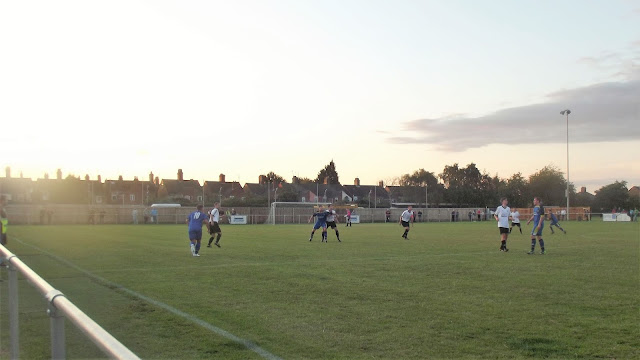 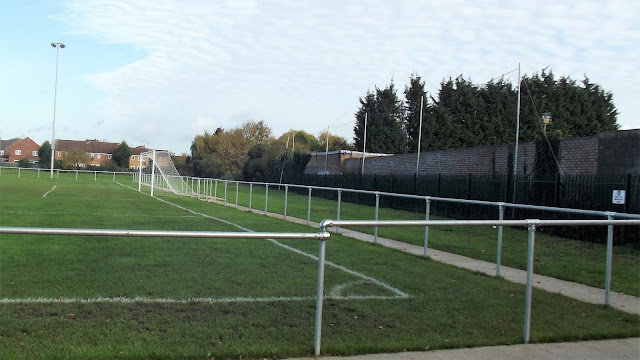