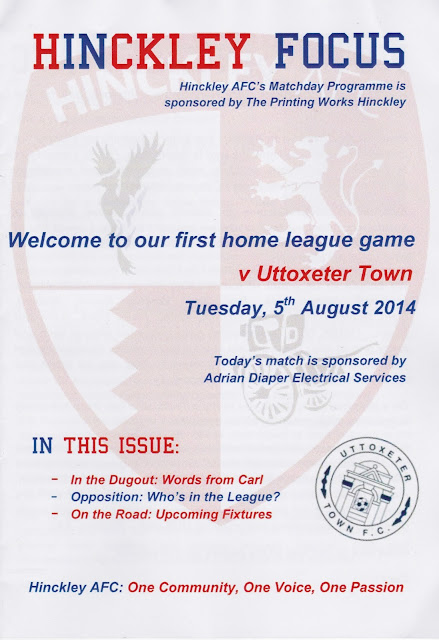 The game was to be played at Heather St Johns FC, who have been in the Midland League since 2003. Hinckley had set up a groundshare there after being unable to sort out the lease on their former round in time for the new season. Therefore they will spend the entire season at their league rivals. The village itself is actually pronounced Hee-ther and is near Coalville, and is about 6 miles from the M1 Hinckley AFC were formed from the ashes of the former Hinckley United club, who went bust in the middle of last season. I had visited them in January 2013, where they were in the middle of an awful run, but managed to keep the score respectable against high flying Brackley, losing 3-1. The resurrection of the club began in December 2014, 2 months after the original club were unable to continue. They decided to adopt the same ethos as FC United, the club formed by fans disgruntled that Manchester United was being taken away from the ordinary fan, this being a one member, one vote system. The club name was decided upon in January, with the badge and kit decided a month later. By March time, they had a provisional business plan which had to be submitted to the FA, and finally, in June, that was ratified and they were allowed to join the Midland Alliance at step 6 of non-league for the coming season.

Uttoxeter Town were also newcomers in this league, having come up after finishing 2nd in the Staffordshire County Premier. The most famous thing about the town is the racecourse, and I was surprised to find that it only had a population of just over 12,000. Even so the football team have underachieved for a town this size, and hopefully, some forward thinking can see the town support a team at this level, or even higher. They have been in local leagues for their entire history, even dropping out of Saturday football for a period. Local sides include village team Rocester, whose population is a tenth of Uttoxeter, and with a strong local economy, including a JCB factory, sponsorship should not be a problem either.

When originally planning for this date, I was expecting to be going to my last pre-season friendly of the season. However, a lot of step 5 and 6 leagues had started already and so I started looking to those fixtures. One that stood out was Hinckley AFC's first competitive home game since they reformed. The original club went bust in the middle of last season, owing to financial difficulties, and would have very good support for the step 6 league in which they were entering. My mind was made up on the Peterborough groundhop on Saturday when there was quite a bit of enthusiasm for the game, plus the fact I had been to take pictures of the ground where they were lodging, Heather St Johns before, and it looked very nice. I was pleased when Anwar said he would do it too, which helped out with petrol. 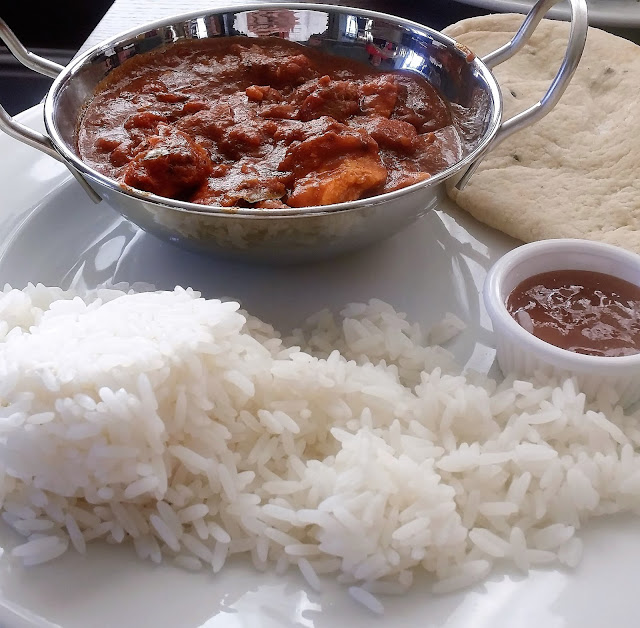 As usual, I was off on Tuesday, but this was not my typical day off kicking my heels, as I had plenty to do. For a start, there were my blogs to do, and I was glad to catch up after doing 6 games at the weekend. I was disappointed however not to make a start on my blog for tonight, as I usually do a bit of research beforehand and do profiles of both the teams before setting off. As well as that, I had 7 parcels to send due to selling various things on eBay. I also had to go and get my prescription, and even then I didn't have time to go down town. Because of that last fact, I left a bit earlier than usual at 3.15 and went to Aylesbury beforehand. I got the deodorant and earphones that I needed and had a look round some other shops before meeting Anwar at 4.15. It was a pretty good journey up, with only a few miles worth of slow coaches and we were there by 6.10. We needed food and with no takeaways, we had to go to the pub. I wasn't planning on drinking today, but when you go in the pub, you get a thirst for it. There was a very good looking deal, Curry and a drink for a fiver, but the free drink didn't include cider, which was most annoying. I ended up paying £3.70 extra for a pint of Thatchers Gold and getting a J20 as my free drink to have on the way home. The Curry itself was a microwaved one, but it was very nice anyway, and was a scorcher, being named the 'Cut Throat Curry' After our meal, we walked back to the ground, getting there just before 7. We had got our programmes earlier just to make sure and were disappointed to pay £1.50 for what was 2 sheets of paper. Entry was much better value though, costing a fiver. So overall I was happy with the deal, and prices charged. I was going to buy a T-Shirt for a fiver too but had run out of cash by this point. We had around 40 minutes before the game after taking some pictures, so I sat in the stand and made a start on my blog while I waited for kick off. 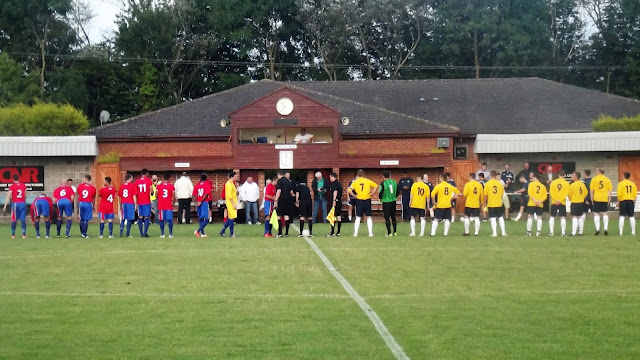 With Hinckley having won their first game and Uttoxeter having lost theirs, I was expecting the home side to dominate the early stages. But it was visitors Uttoxeter that were well on top and they took a deserved lead on 6 minutes when Matt Redshaw poked home a loose ball to give the visitors the lead. It lasted for little more than 60 seconds though, as Hinckley broke straight away and on their first attack were awarded a penalty. It looked outside the area from where I was but either which way former Cheltenham player JJ Melligan stepped up and confidently finished. A spell of Hinckley pressure followed and it took a good tackle from a Uttoxeter defender to prevent the tie being turned on its head. One amusing thing happened after the Hinckley goal - the referee had to call someone with a plastic bag on to clear dog poo of the pitch, certainly a first for me at a game.  The game swung from end to end, on 20 minutes the Uttoxeter right back Jack Holley had a goal ruled out for offside, but Hinckley caught them on the hop and were unlucky not to get a goal when they broke and put a shot into the side netting. The visitors were looking the better side and on 28 minutes a stinging volley forced a good save out of the home keeper. The game flowed nicely and was 1-1 at the break. Uttoxeter were the first out by around 5 minutes and were left to wait for the Hinckley team to emerge. It was the visitors who had the first real chances of the half, forcing 2 good saves out of the keeper, the second forcing a succession of corners. They continued to dominate and got their goal on 52 minutes. Initially, it looked like it was a penalty as a Hinckley player handballed in the box, but the shot went in anyway, being scored by Kyle Espin. It took another good save from the Hinckley keeper to stop them from extending the lead. They continued to press, playing some fantastic football and on 67 minutes got a deserved third when the ball was cut back and Matt Redshaw got his second from the edge of the area despite the best efforts of a home defender on the line. The visitors further extended the lead from the penalty spot on 79 minutes as Jack Holley, who was my man of the match successfully converted after a heavy tackle in the box. It was 5-1 when Alex Woods scored a smart finish with 2 minutes to go. And a pretty much one-sided game was complete when Jack Holley scored another penalty. As with the first it looked outside the area and a certain sending off for the keeper, but instead, it was a penalty and a yellow card.

That was it as far as goals were concerned and it certainly wasn't the result I was expecting. Massive credit to Uttoxeter, they were brilliant after coming up from step 7 last season and by all accounts, they gave a good showing of themselves on Saturday just gone if posts on the Kempster Forum are to be believed. It was 9.50 by the time I got going, but we made great time on the way home. I dropped Anwar off at 11.10 and got home myself at 11.30, going to bed soon after but not getting to sleep till after 2. As per usual, football makes me really hyper and I almost always find it hard to get to sleep, not ideal when I am up at 4am. 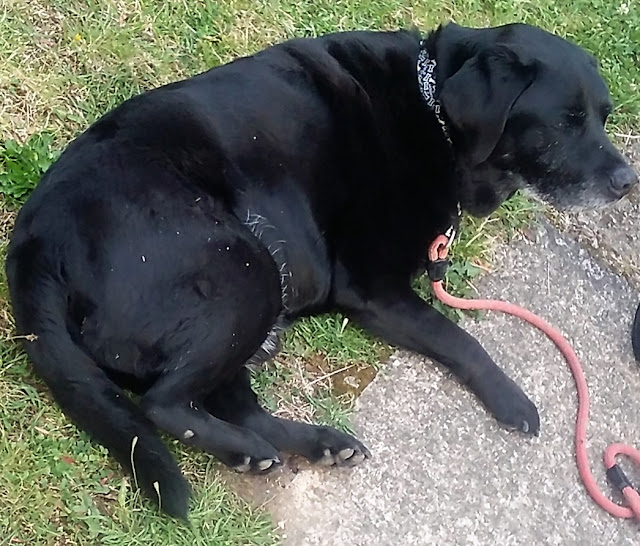 ST JOHNS PARK is a lovely place to watch football with all of the pitch surrounded by neatly cut hedges. On the side where you come in, there was a seated stand to the far right, holding around 120, plus 2 covered areas for the officials. Teams come out onto the pitch through a very smart wooden entrance with the press box and a clock above it. On the other side, there is a stand with around another 120 seats, some of them are padded and really comfortable. The rest of the ground is open. I didn't use the bar or tea hut, but both looked pretty good. There were only T-Shirts for sale club shop wise, but these were great value at £5, I guess they will get more stock in soon. There are no takeaways near to the ground, but the nearest pub does good value food, which was nice when we went. 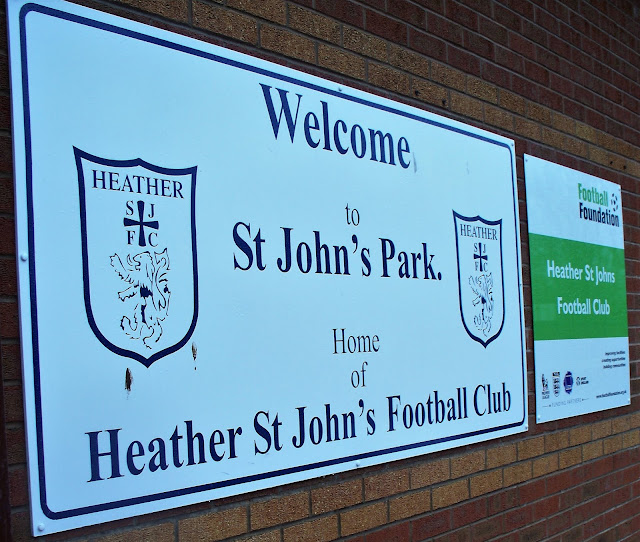 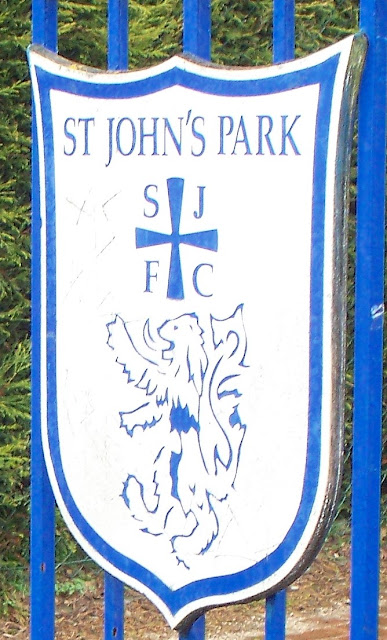 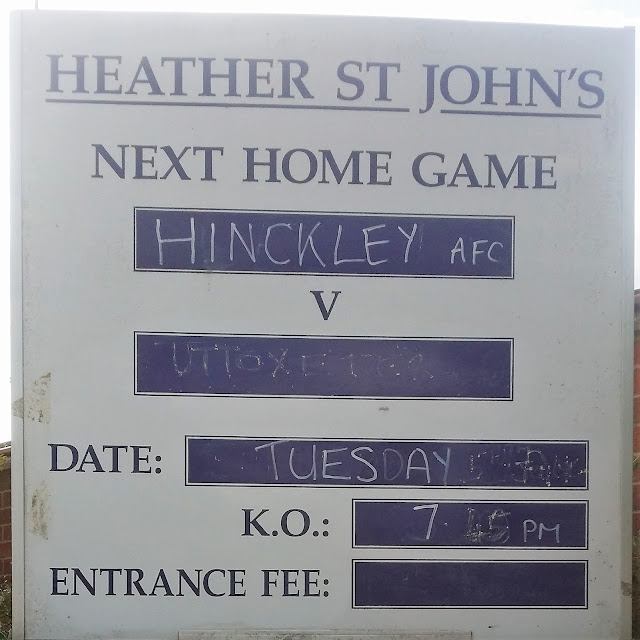 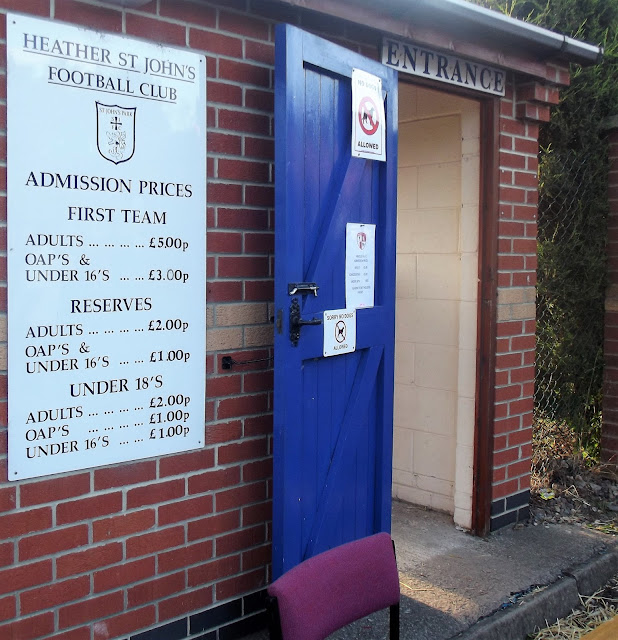 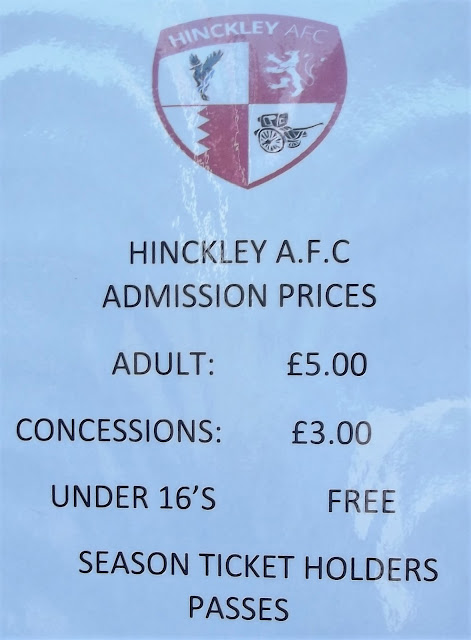 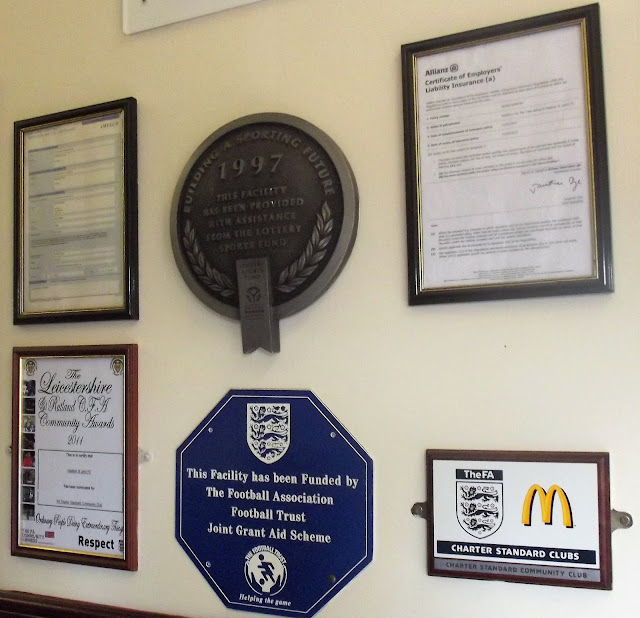 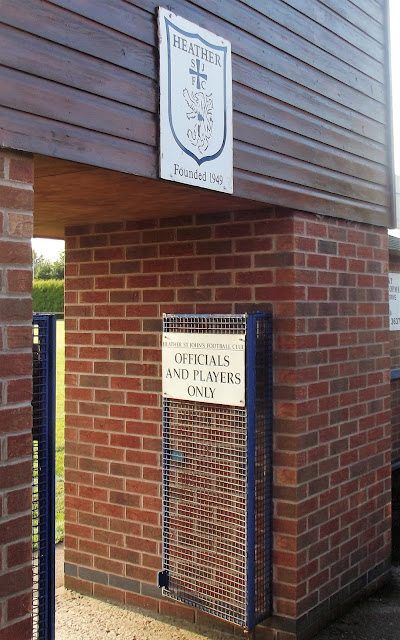 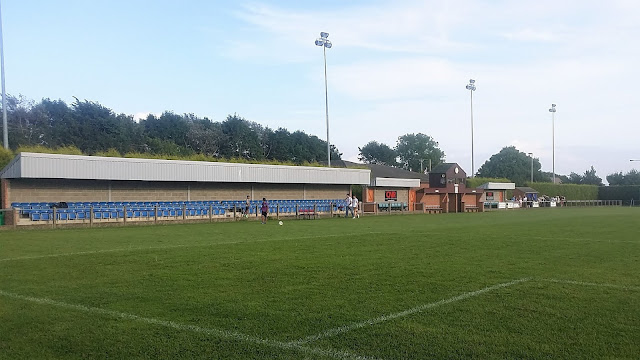 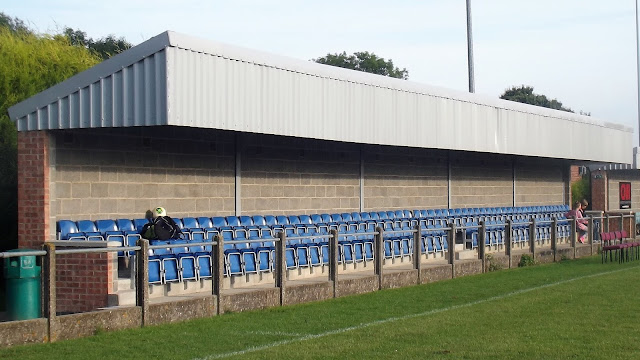 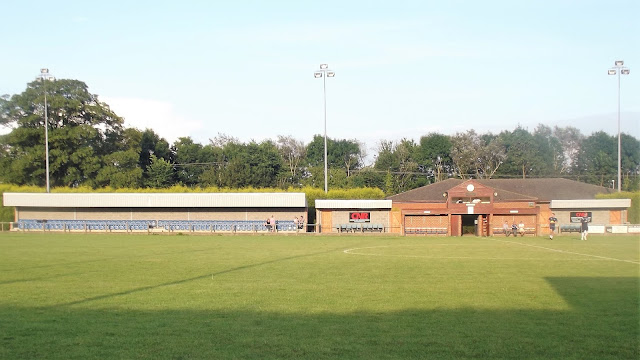 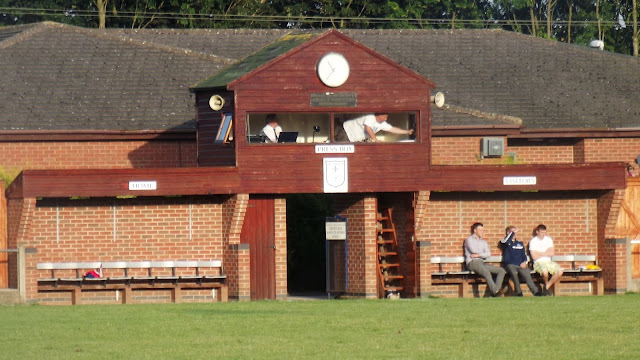 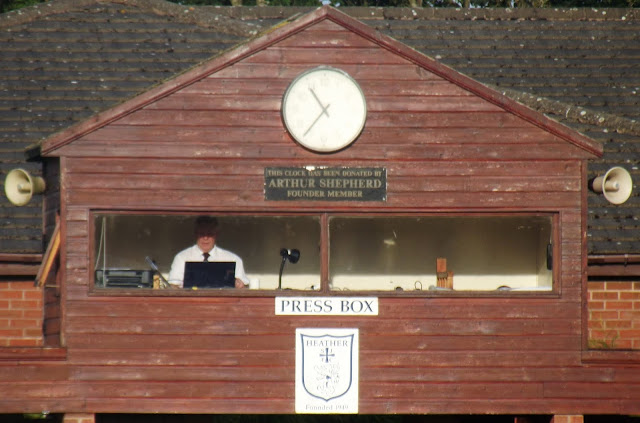 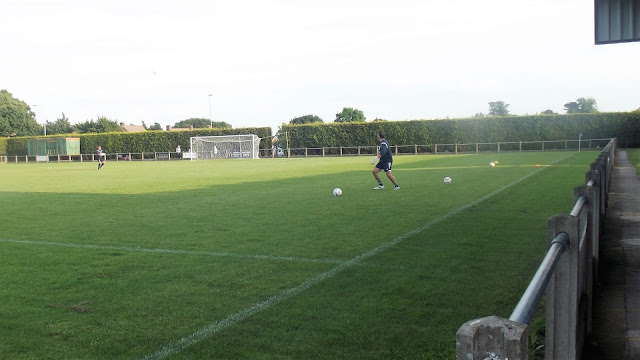 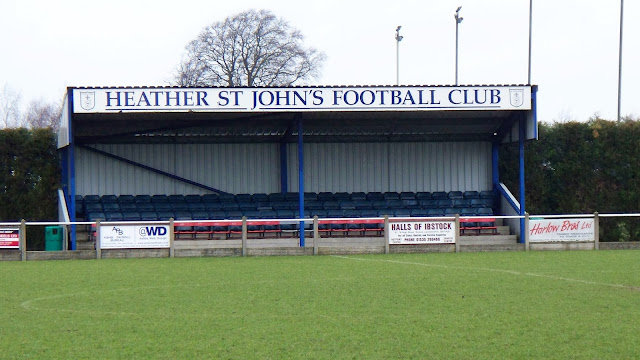 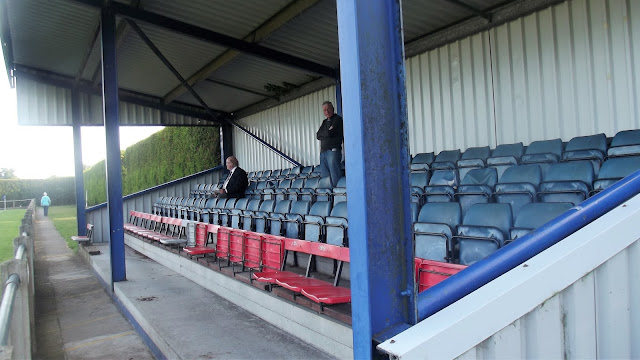 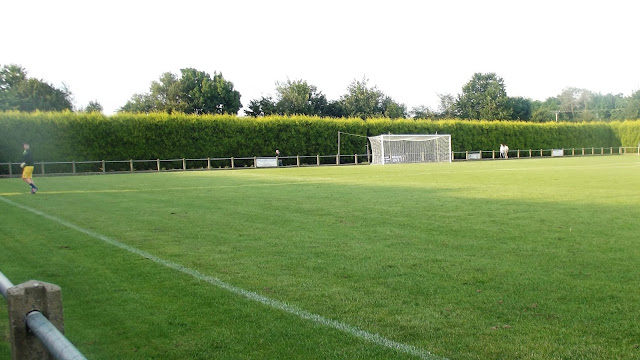