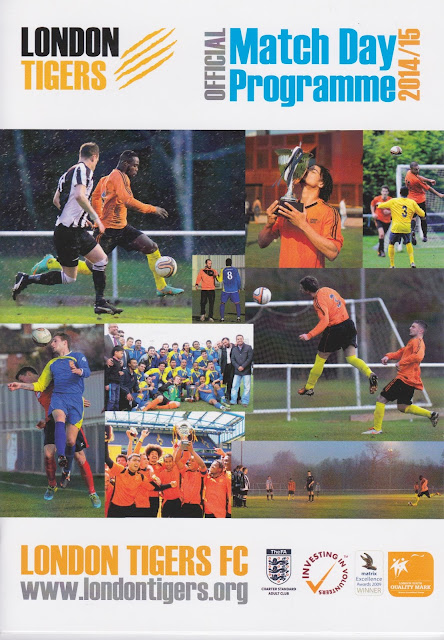 London Tigers have a fairly short history, but their cause is one to have some merit for. Founded in 1986 as Marylebone FC, they changed their name to London Tigers in 1997. A few years with the Kingsbury suffix added to their name in the late 2000s before reverting to their previous name. They were set up to give disadvantaged people a chance via sport from across a wide part of London, which is a pretty decent thing to do. The previous match I had seen between them and Enfield 1893 had been dull, that was in the FA Cup earlier last season. Talking of the FA Cup, the furthest they have reached was the 1st Qualifying Round in 09/10, while the 1st Round of the FA Vase has proved their limit, a defeat to Biggleswade United ended their dreams that season. And it was Biggleswade I had last seen them play at, back in March this year, where they were much the better side against their Bedfordshire based opponents, but could only manage a 1-1 draw. They had started off the season with a 2-1 defeat at Hertford Town and would be hoping for better in their first home game, and a reasonably local derby against Hillingdon Borough.

Originally I was planning on going to Millwall v Wycombe Wanderers on this day. And it would probably have been a good day out in London too. But then I started totting up the costs - £30 for ticket and travel, and that was before I'd even eaten or drunk anything. The plan was to have a few drinks and something to eat in London, that would probably be another £20. There was another reason - I was trying to go a bit easier on the drink, after weeks of cider festivals and other stuff going on in midweek and at the weekends, I wanted to take it easier for a while. That was when I started pondering the non-league fixtures for that Tuesday. I already knew regular travel companion Anwar would be going to Millwall, so I wanted something fairly local, and also something that was South of where I lived, as I could save the ones where I went via Aylesbury for us both to do. I was very close to completing the Spartan South Midlands League, and so when I saw London Tigers were at home, I decided upon that one, as it was the only one south of me that I had left to do in that league. They were based in Greenford, which was where I lived until I was 6 years old. In fact, it was the nearest ground to my original house, beating North Greenford United by half the distance. Not that I liked football then, I only got into it 6 years after leaving Greenford, and I wondered if we had not moved, would I have got into football at all, or would I have grown up supporting another local team such as Brentford or Hayes. The team playing at my local ground at the time were Viking Sports, later to become Viking Greenford. They played in the Hellenic and Combined Counties leagues before folding in 2003, conceding 175 goals in the process. The league was a bit crazy that year - despite getting 111 points, AFC Wimbledon still only managed 3rd place behind Withdean 2000 and AFC Wallingford. Goals were aplenty in that league, even North Greenford United in 10th got 104. I actually saw the original occupants of the ground in action, in their 'home' game against AFC Wimbledon. It was a 4-0 victory for the Dons and was played at Church Road, the former home of Hayes. Despite a healthy 895 crowd, the money did not stop them from folding at the end of the season, even though the financial windfall from the travelling Wimbledon army helped many others in the CCL at the time.

I was coming up to Ground Number 400, and this would be number 398. I worked out that my landmark ground would come up wherever I went on Sunday in the FA Cup, with me off to Staveley Miners Welfare v Worksop Town on Friday. I was considering going to Hastings on Monday night before the game, as my parents were away. But it was a decent night on the TV, plus the fact that Monday night is the one day of the week when I get a decent nights sleep, due to staying in and not having work on Tuesday. I spent the Tuesday on my day off as per usual, popping to town to get a few bits I needed. I had dinner at around 5.45 and then went onto my computer to check there had been no last-minute updates to the fixtures. That was easier said than done. The league themselves had not updated their website since last season. London Tigers' site was a very neat one but devoted more to the organisation as a whole, rather than the football team. And Hillingdon Borough's was a club website one, which are terrible, and I can't see why anyone with an ounce of sense would use that god awful site over the flawed, but utterly brilliant by comparison Pitchero site. I left home at 6.15 and made steady progress for the first part of my journey. As soon as I came to the end of the M40 and the start of the A40, the traffic slowed to a crawl and it was like this for the next 7 miles. Eventually, I found out what had caused it, 2 cars had had a minor prang, luckily no one was hurt, but there were police at the scene and we were on our way again. The delay was probably due to rubberneckers, but it was no bother, as I was at the ground by 7.15. I parked up and after checking my Facebook and taking some pictures of the ground, the heavens opened and so I went and took a seat in the stand behind the goal. I killed the time until kick off by getting on with my blog and looking at stuff on the internet. It was a bit chilly by now, what with the rain, so I went to get my coat from my car. Programmes were available, so I got one from the clubhouse, for the cost of £1. 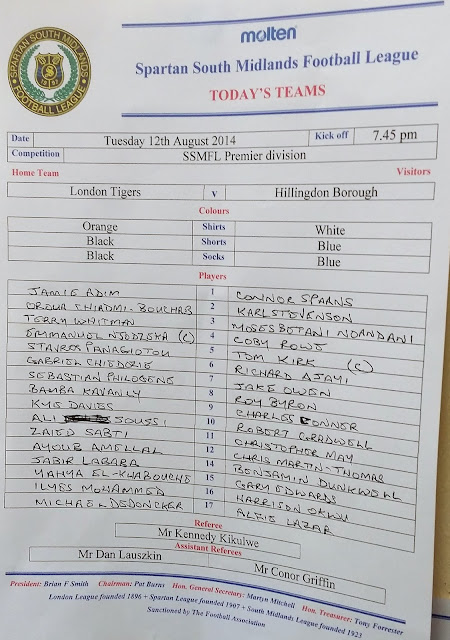 The game played for a few minutes before the referee realised there were no corner flags, and so the game was stopped briefly while some were found. From the restart, Hillingdon Borough scored a goalmouth scramble resulting in the number 10 scoring after around 4 minutes played. A spell of Hillingdon pressure followed, where they could have added to their tally, but then the home side started to play and were unlucky not to get an equaliser after pinball in the area. They eventually got their goal around 10 minutes before half time, when the goal was put in from close range, but my view was not ideal, as it was right up the other end. I decided to go and stand along the side seen as it had stopped raining, so as to get a better view. Half time was soon upon us, with Hillingdon having the last chance of the half. Hillingdon Borough took the lead with the first real chance of the second half on 58 minutes when an angled ball was put in and finished from just outside the box. It had been pretty close up to that point, but on the balance of play was just about deserved. It was 3-1 just after and the game looked over. It looked like London Tigers had one back on 68 minutes, but it was ruled out for offside. 2 minutes later, they did have their goal, and it looked like it could be game on after all. London Tigers were really taking the game to the visitors and there deserved equaliser came on 85 minutes as number 7 finished after a great ball across the goal line. There was a further twist to the game right at the death as Hillingdon bundled the ball over the line for what looked like the winner. But with this game, nothing was guaranteed. But that was how it ended, and I had seen another great game in the ever-entertaining Spartan South Midlands League, which always seems to throw up a good game for me. In fact, I must have missed one of the goals when I nipped to the toilet briefly, as when I checked in the morning, it was 4-4! From there I had an easy drive home, though getting out of the ground onto the busy A40 had to be taken with care. I learned that Wycombe had been unable to turn the game around and had lost 1-0 to Millwall despite a good show. I listened to Plymouth Argyle 3-3 Leyton Orient on Radio London and there was a 6-6 between Dagenham & Redbridge and Brentford before the Griffin Park side prevailed. I got home just after 10, having a look around the internet and a chat on Facebook, before getting into bed at 11. 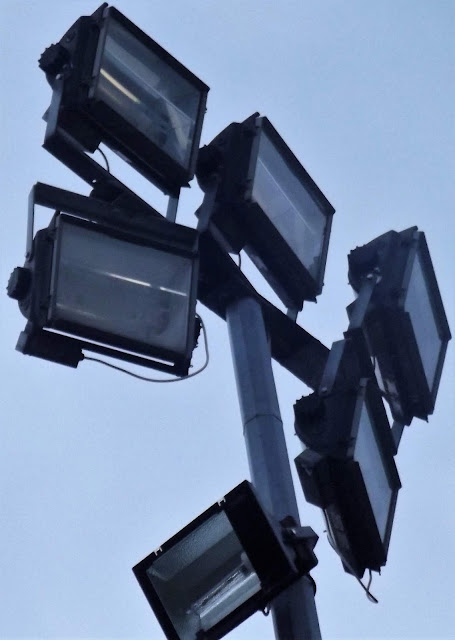 
AVENUE PARK is a very basic ground, even for step 5. The main stand is behind the goal and holds around 150. There is further cover for around another 50 at the other end, but both the sides are open, in fact, the side to the right has no room for standing and only the dugouts. The bar is pretty basic, though there is plenty in Greenford, a short walk away. The ground is unlikely to be ready for the next level up, as both sides are hemmed in and the parking is limited. 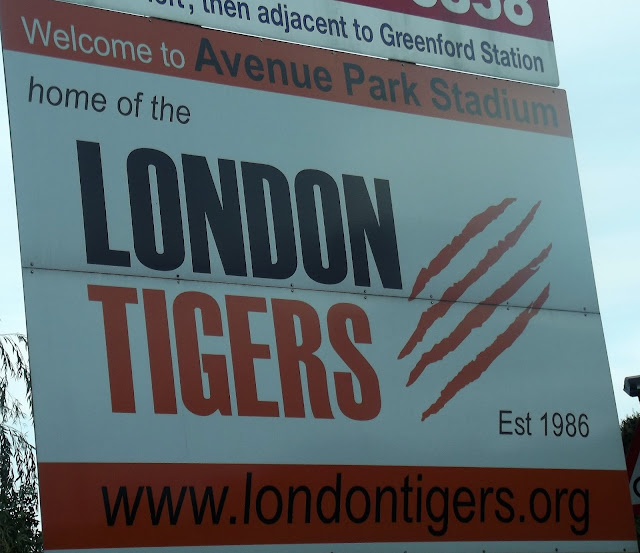 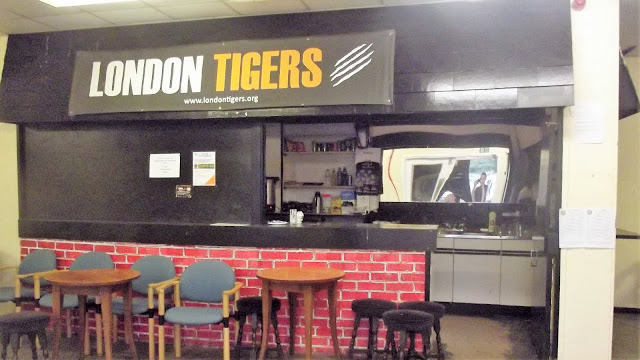 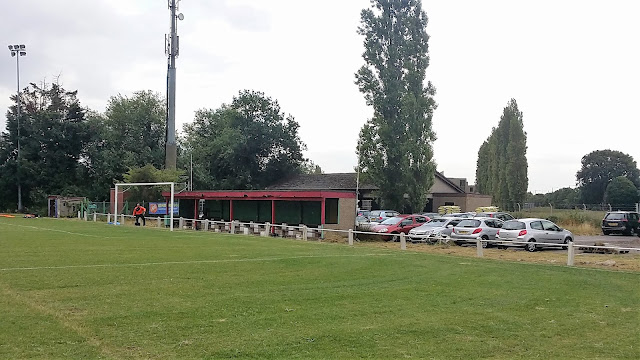 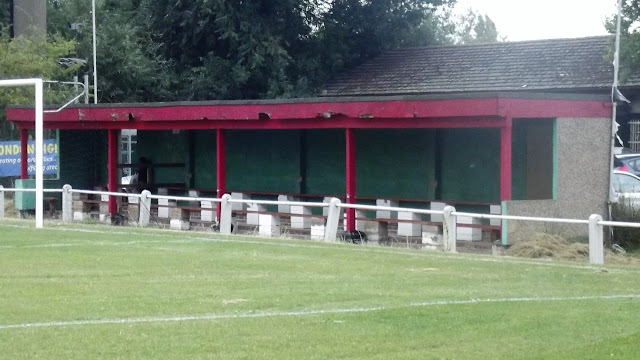 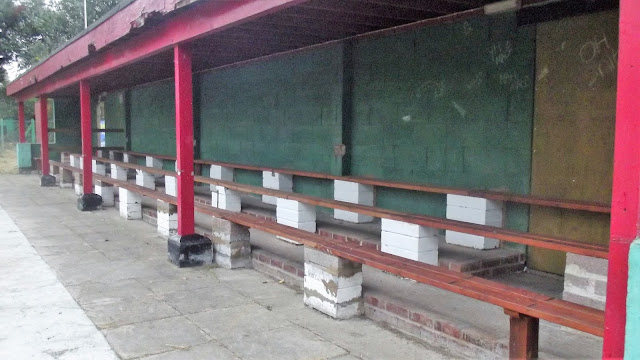 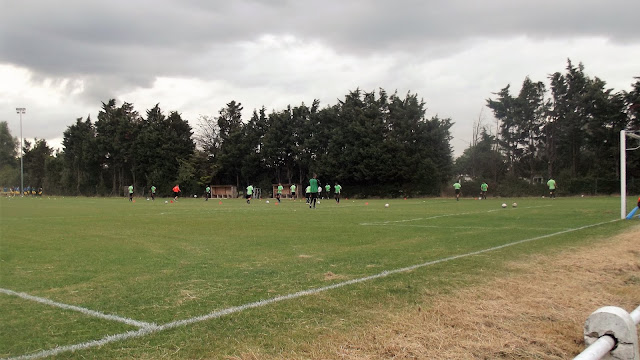 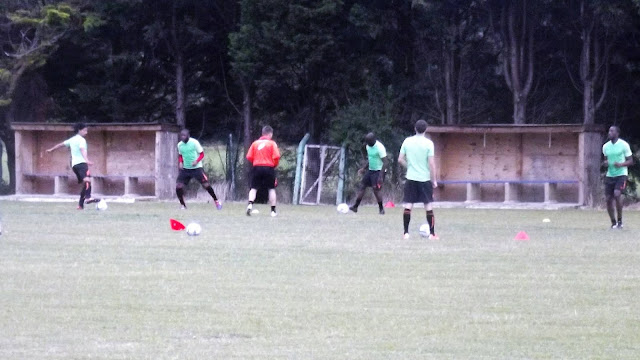 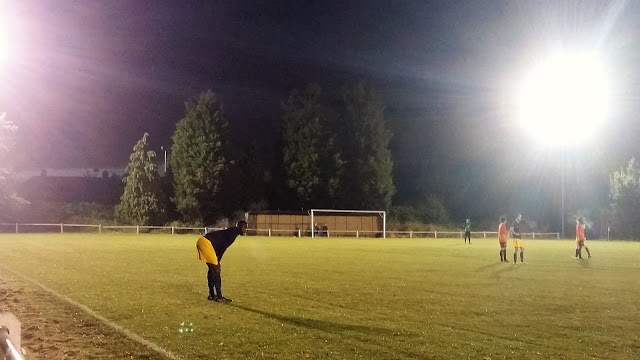 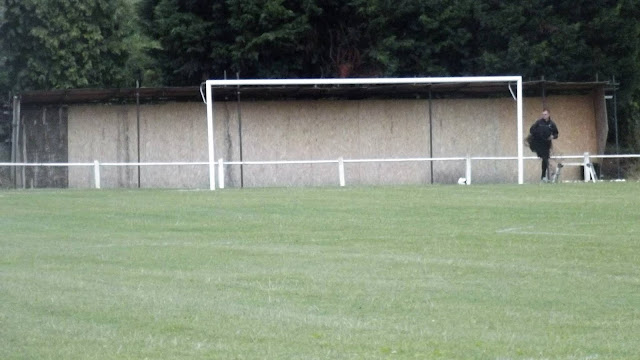 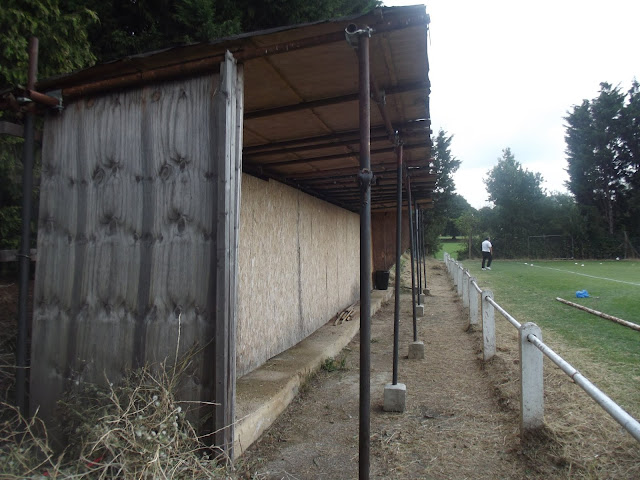 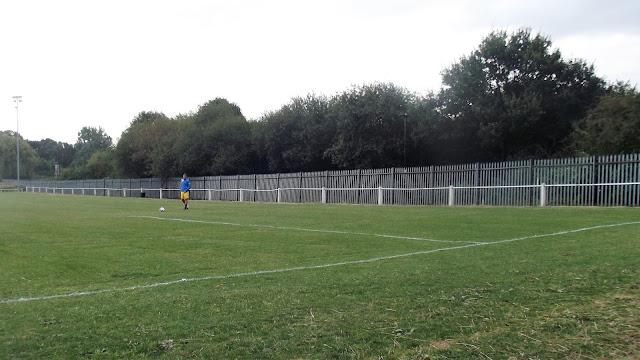 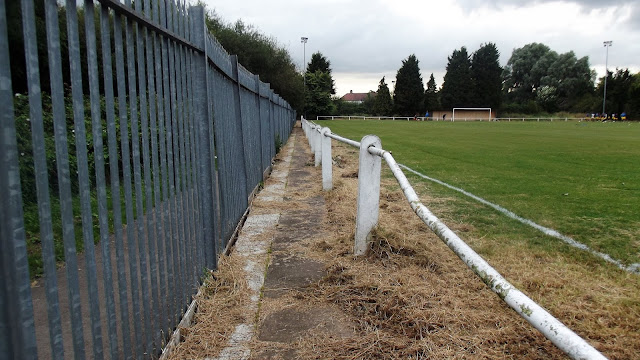