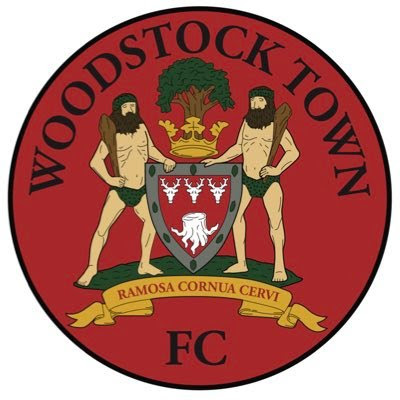 Woodstock Town FC
New Road
Woodstock
Oxfordshire
OX20 1PD
Official Website
Twitter
Ground Number: 1030
Saturday 18th December 2021
Woodstock Town 5-3 Chinnor
Hellenic League D2 North
WOODSTOCK TOWN FC - A BRIEF HISTORY
The club was formed in 1998 following a merger between Old Woodstock and Woodstock Town, taking the name Old Woodstock Town. They were both members of the Oxfordshire Senior League but with resources pooled, they were able to join forces and attain a place in the Hellenic League Division 1 West. They won the Oxfordshire Senior League in their first season, joining the Hellenic League in 1999.  In 2008, they finished as runners-up behind Winterbourne United. Following promotion to the Hellenic Premier, they had their best-ever finish in 2011, 9th at step 5 of the Non-League pyramid. Despite this, the facilities at their ground were deemed inadequate and they were demoted back to Division 1 West. They finished as runners-up to Tytherington Rocks the following year but were denied promotion. Eventually, ground gradings got even tighter and they had to move into a groundshare with North Leigh to retain their step 6 status. They changed their name to Woodstock Town in 2016 and remained in Hellenic D1 West until 2018 when following a lowly finish, they moved home and took a voluntary demotion to Division 2 West. The 2018/19 season was an unhappy one for the club as they finished rock-bottom and results have been mixed ever since. They were 4th when 2019/20 was abandoned, but struggled the following year. This season they currently sit around the middle of the table.
The club enjoyed their best ever FA Cup run in their debut season of 2010/11. They won 1-0 at Brockenhurst before a 6-3 win against Laverstock & Ford. Following a 3-2 win at Bitton, they suffered a narrow defeat at Hamble in the 2nd Qualifying Round, bowing out 2-1. The following season, they had an impressive run in the FA Vase, beating Bicester Town, Abingdon Town, Witney Town and Wantage Town before going out to Bethnal Green United in the 4th Round. There's no record of any local cup wins since the merger but their record attendance of 258 came in 2001 as they hosted a game against Kidlington Town. This was part of the Hellenic League Groundhop weekend. The market town of Woodstock is located eight miles northwest of Oxford and has a population of 3,100. It is the location of Blenheim Palace and has several other royal connections. 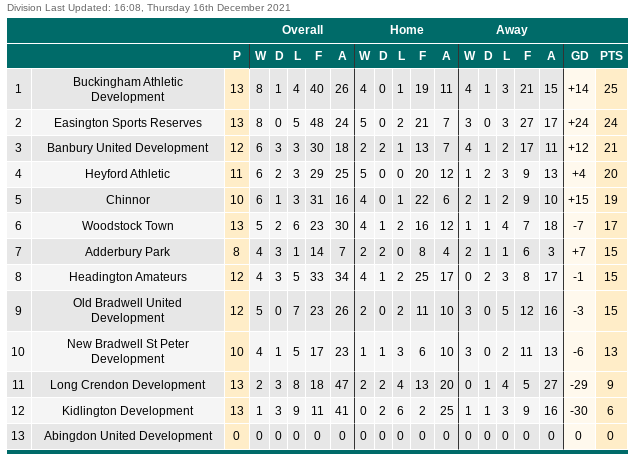 MY VISIT
For weeks, I'd had a plan in place to visit Bearsted to complete the Southern Counties East Premier Division. A lovely day was planned, including some pre-match drinks in Maidstone. However, in light of rapidly rising Covid cases, I decided that it might not be the greatest idea to get on a packed train in London on the last Saturday before Christmas. In any case, it was postponed due to Covid, one of many fixtures to suffer that mate. Working in retail, I can see why cases are spreading. Whilst the vast majority of people are brilliant, there are a minority of people that refuse to wear a mask and come in huge groups. All pretty unpleasant for decent shoppers and workers, for par for the course in the lead up to Christmas. I was glad to have Saturday off for some respite but had no idea where I was going. A game in the Herts Senior League would have been great, but they were literally encouraging teams to call their games off and so three decent options went for a burton. In the end, after drawing up a pretty uninspiring list, I got in contact with Anwar. I offered him Woodstock Town, Blaby & Whetstone and Loughborough Dynamo. The latter had proved extremely elusive for midweek fixtures, barely ever coming up on our list of options over the past ten years. However, we decided to go for the local option of Woodstock in Oxfordshire. 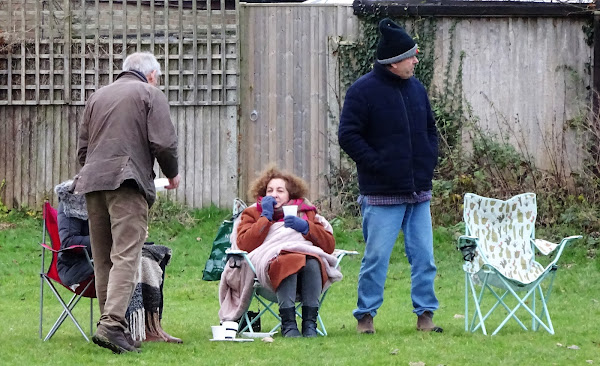 Friday night would have been ideal for a game, what with a lockdown looking likely. However, the nearest game was 180 miles away and so I spent the evening at home with a few drinks. There was a pitiful range of games next midweek, with a revisit at Oxhey Jets on Tuesday already cancelled. So it looked like today's game will be the last before Christmas for me. I had a good nights sleep and woke just after 8 and had a shower. I also cooked up some chicken to take to today's game but mainly for work tomorrow. After going for a five-mile walk for exercise, I came back and spent 20 minutes for home before leaving at 12:15. I was in Aylesbury by 12.40 and five minutes later, we were on our way. It was a decent journey, although Google Maps sent us the long way via the M40. We were still there as planned around 12.40 though. We walked the short distance to the ground and found a very nice place to spend an afternoon watching a game. I had my lunch but didn't feel I had enough time to catch up properly after my drive. This proved to be the case, as the game turned out to be excellent and I struggled to keep up with my note-taking on the game, but I did my best. No scorer details were present upon publishing this blog. 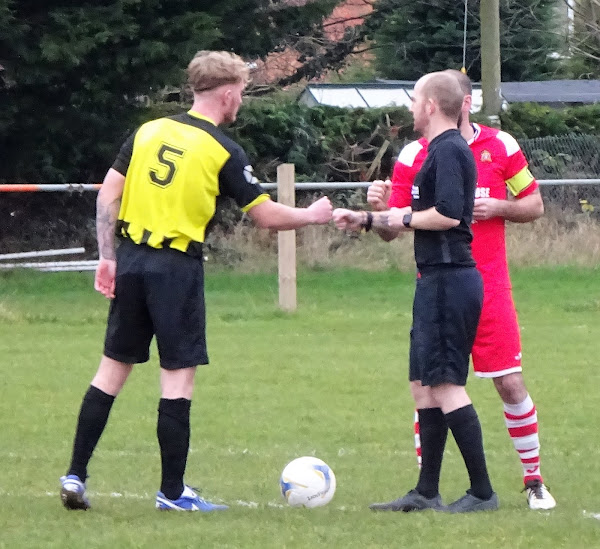 6th place Woodstock would be facing 5th place Chinnor in this contest. The hosts were in poor form, losing five of their last six. They'd lost 8-2 at Buckingham Athletic in their last game and had also lost 3-2 at Heyford Athletic and 3-1 at Banbury United. At home, they had lost 2-0 to Buckingham Athletic and 2-1 to New Bradwell St Peter. The only win had come as they beat Headington Amateurs 3-1. Chinnor had been in far better form having beaten Heyford Athletic 3-0, Chinnor 4-3 and Long Crendon 11-0. They'd also won 5-1 at Kidlington. They'd suffered a 6-4 defeat at Woodcote in the Oxfordshire Intermediate Cup and a 2-0 loss at Adderbury Park in the league. Chinnor started the game brightly and they took the lead on six minutes. It was a well-worked goal and following a square ball, #9 finished low from six yards. Following a good spell, Woodstock Town equalised on 19 minutes, Elliott Powell finishing low from the edge of the area. The hosts continued to dominate and they took the lead on 26 minutes, Jason Trinder converting a free-kick that had been awarded for a trip. The referee had a good game up until 37 minutes when following a visiting defender holding a home player back by the arm when getting away from the defence, he bizarrely gave the free kick in favour of the defender. The hosts continued to have the better of the game but in the lead up to halftime, Chinnor were back in it. They equalised on 43 minutes, #9  heading home a cross. A minute later the hosts regained the lead. Powell flicked the ball onto Harris Kilburn who finished from a narrow angle. It had been an enthralling first half but the visitors came out strong at the start of the second period. On 61 minutes, Chinnor equalised, a corner was put in, the home defence failed to clear a player shot home on the turn. It was a just equaliser as the referee had missed a blatant Woodstock handball in the area following a free-kick. At least he had evened things up from the earlier decision though. Woodstock kicked on from here and forced the Chinnor keeper into a number of excellent saves to prevent them going ahead. They held out until 80 minutes, Woodstock making it 4-3 with a curling shot from the edge of the area by Matheus Medeiros. The visiting keeper was sin-binned for his protests, claiming he had been fouled in the build-up. Right on time, the game was put beyond doubt, a well-worked passing move lead to Marcello Guillerme making it 5-3 to Woodstock.

The game had been an excellent and enthralling contest. Woodstock Town deserved the win, but maybe not by two goals. There were a few locals who had attended and so the majority of the 30 crowd would have gone home happy. As with previous experience, the Chinnor bench was passionate and lively and the referee had to have words with them on a number of occasions. However, they never crossed the line into being abusive to the officials, which was good to see. We left around 3.55 and had another good journey home. Listening to the results coming in made the journey pass quicker, The programme was largely decimated due to Covid but it tended to be the bigger leagues more affected, with the vast majority of non-league games going ahead. I dropped Anwar off at 4.50 and headed over to Lidl to get my dinner. As well as a pizza, I also got some stuff from their excellent bakery, some cider and a meal for work later in the week. I was back home at 5.45 and spent the evening typing my blog and listening to 606. With a lockdown looking more and more likely, thanks to rampant scaremongering by SAGE and a careless general public, I may well try and get a game in midweek now, although it will depend on work. I had a few drinks, but as usual, was not looking forward to Sunday. They are horrible at the best of times, looking like a scene from the film 28 Days Later. But with it being the last one before Christmas, I expect it to be even worse than usual, but will just have to grit my teeth, keep my head down and get on with it. 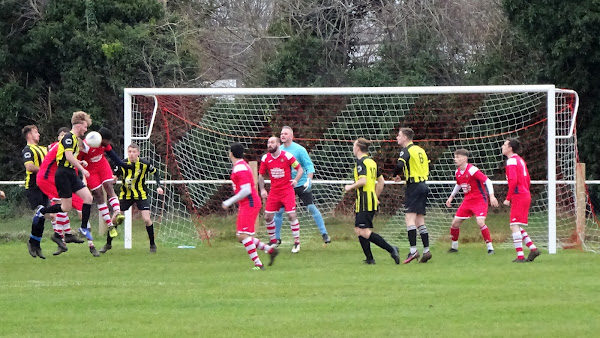 THE GROUND
NEW ROAD is a great venue for the level Woodstock play at. It has a pleasant country setting and is a nice place to watch a game of football. There's just one covered area, this holds around 100 in a flat standing area. Behind this is a bar that does food in the form of pies and chips and also offers a small range of alcoholic drinks. It's of a decent size and well furnished. The rest of the ground is open standing. I didn't see a huge amount nearby, but there's plenty of parking at the ground and in the surrounding streets. 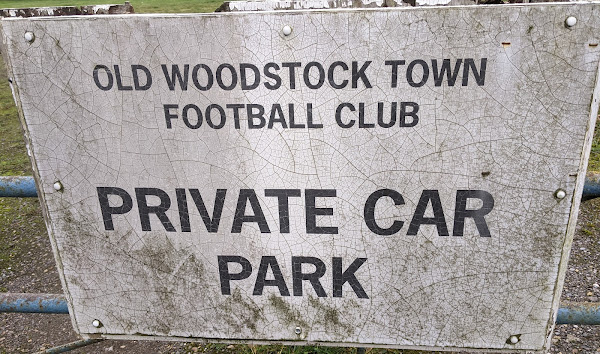 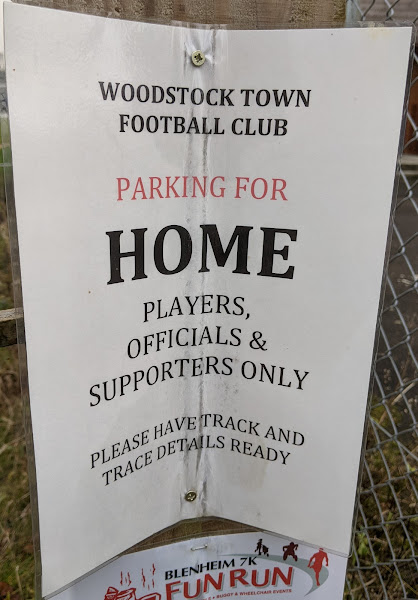 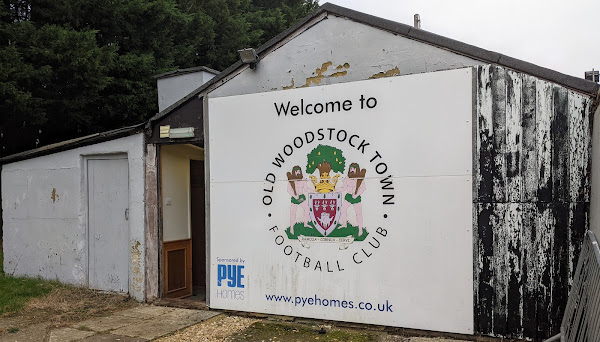 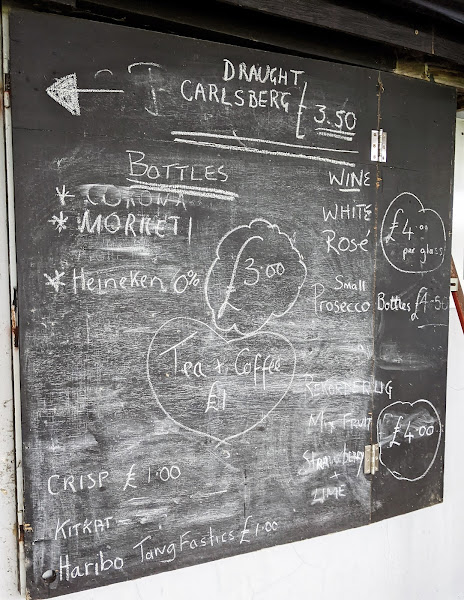 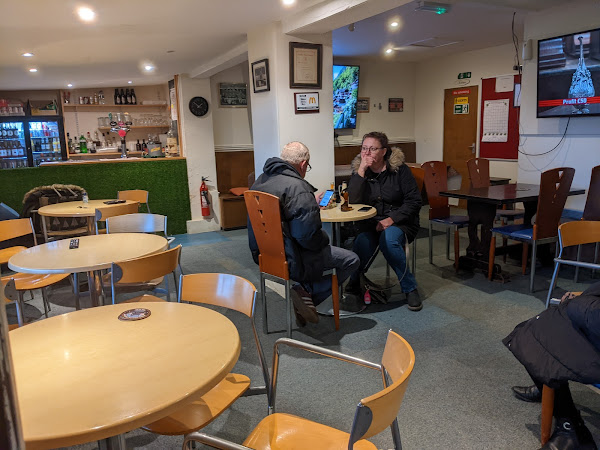 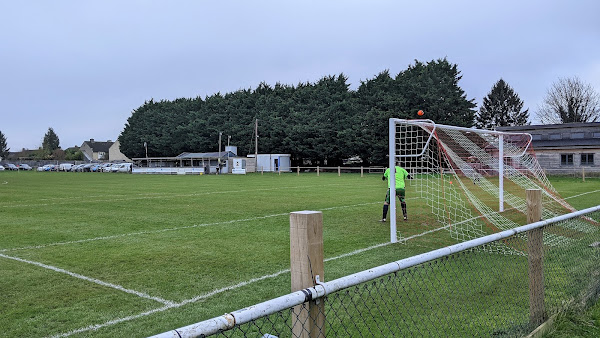 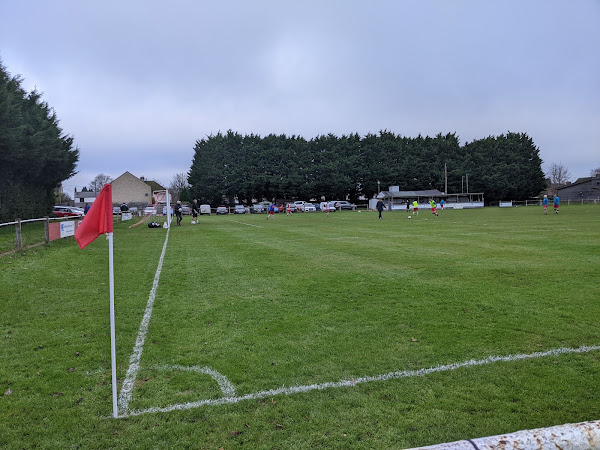 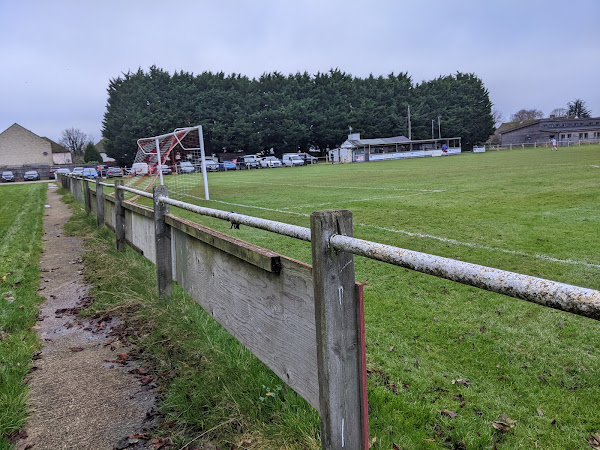 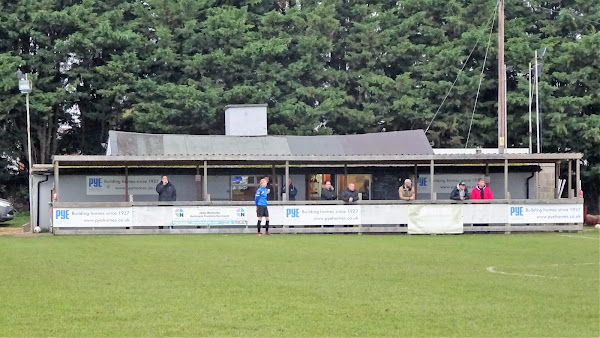 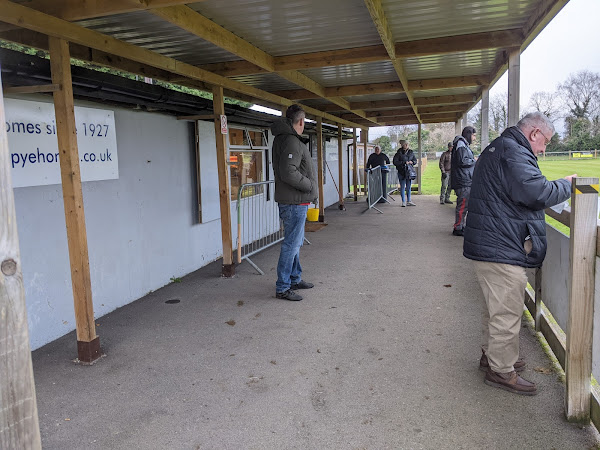 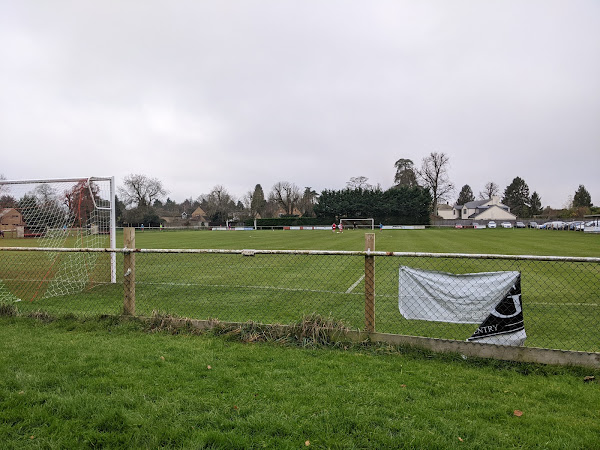 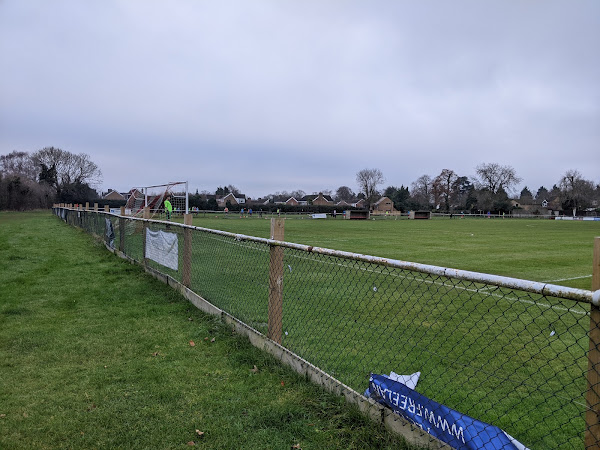 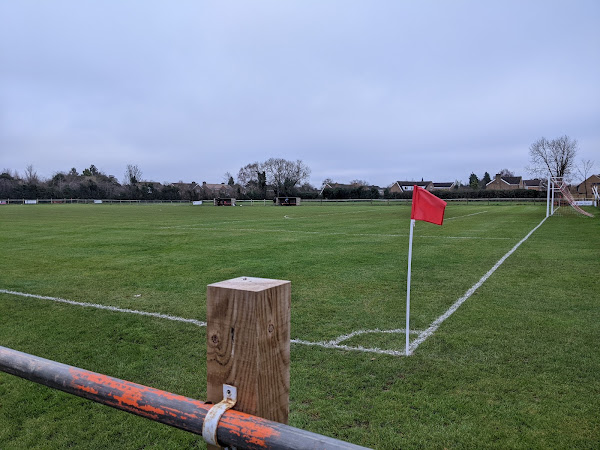 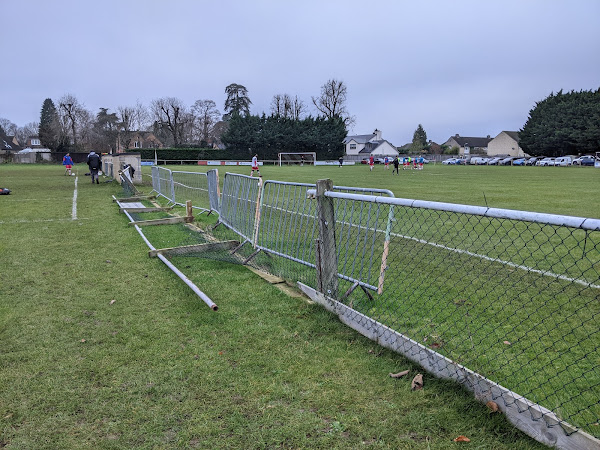