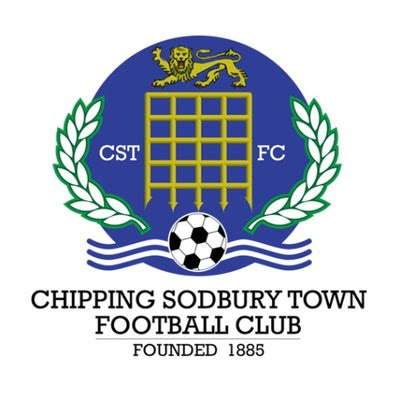 Chipping Sodbury Town FC
The Ridings
Wickwar Road
Chipping Sodbury
Bristol
BS37 6GA
07745 299351
Official Website
Twitter
Ground Number: 1031
Tuesday 21st December 2021
Chipping Sodbury Town 0-1 Royal Wooton Bassett Town
Hellenic Premier
CHIPPING SODBURY TOWN FC - A BRIEF HISTORY
The club was established in 1885 and three years later, joined the Bristol & Suburban League (at that time known as the North Bristol & District League). They were Division 2 champions in 1949 and Division 1 champions the year after, Following a brief spell in the Western League, they returned to the Bristol and Suburban League. They went out of existence for a few years in the late 1950s but would return to the Dursley & Wotton league in 1959. They later moved up to the Bristol & District League and then the Bristol Premier Combination. They won promotion from Division 1 in the late '90s and spent a few seasons in the Premier Division before being relegated back. They'd win Division 1 in 2006, before becoming Premier Division champions in 2008. This earned them promotion to the Gloucestershire County League and although they finished bottom in the first season, they avoided relegation. Results improved greatly and they finished 3rd in 2011. Another 3rd place finish in 2015, this time behind Cheltenham Civil Service and AEK Boco saw them promoted to Division 1 of the Western League. They grabbed the chance with both hands, winning Division 1 at the first attempt. Ever since, they have been at step 5 of the non-league pyramid, enjoying a best-ever finish of 10th in the Western Premier in 2019. At the start of this season, geographical reorganisation saw them transferred to the Hellenic Premier.
Chipping Sodbury enjoyed their best ever FA Cup run in 2008. After beating Reading City and Easington Sports, they went out to local rivals Bristol Manor Farm in the 1st Qualifying Round. The club had enjoyed a torrid time in the FA Vase, up until this season, they had lost all five games. That changed this season, with them thumping Bristol Telephones 6-1, however, they did go on to lose 4-1 at Torpoint Athletic in the 1st Round. In terms of local competitions, the club won the Bristol Premier Combination Premier Cup in 1993. The market town of Chipping Sodbury has a population of just over 5,000 and amongst other attractions, has a twice-yearly mop fair. Famous people to be born nearby include author JK Rowling and inventor James Dyson. 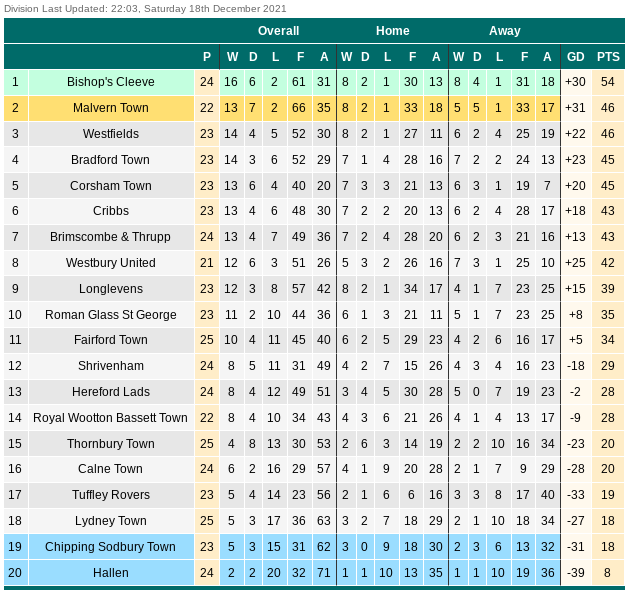 MY VISIT
My initial thought was that I wouldn't be doing a game on this day, due to work and a paucity of options. However, a couple of things changed my mind. Firstly, there was ever-increasing talk of a lockdown due to rising Omicron cases. Secondly, work had not been as bad as expected. Although packed, there was no repeat of the ten 12-hour days in a row that I did last year. I did however have to come in on Tuesday, but that was not too much of an issue as it was not an early start like last year and it meant I'd be closer to the M4 than I would be at home. Had I have been off on Tuesday, I would have probably gone to Whitchurch Alport on Monday night too. It has been a long-term target of mine as it looks a great place. However, on reflection, I'd rather give it more respect than a rushed journey from work, maybe making a day of it. I'd really enjoyed my last groundhop to Woodstock Town on Saturday but was disappointed that I didn't get a retweet for my blog. Even so when they just used my pictures without asking or giving credit, but it didn't detract from what was a great game. I was hoping that this Hellenic League game would be as entertaining. 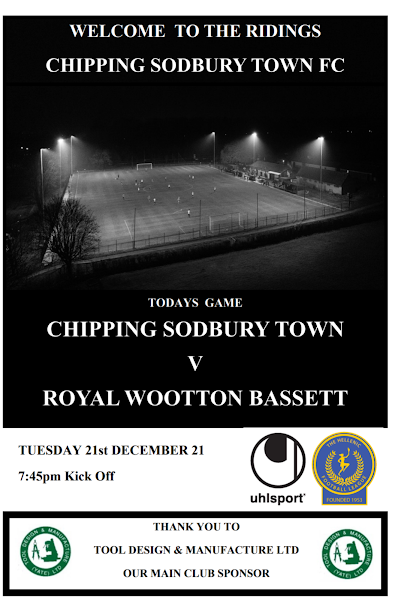 I did all my planning on Monday night, as always looking for a place to eat. As with usual in smaller places, the restaurants lack the creativity and imagination on the menu of more ethnically diverse places. It was just the same bog-standard menu at all the outlets. I found a decent  Chinese a few miles away and this seemed worth the detour for the increased choice. There was also a lack of a local Co-Op or cider off-licence which was a bit of a disappointment. I finished my research into club history and team form on Monday night and was just hoping that there would be no hitches with the game going ahead. I woke on Tuesday to see the news that at midnight, the disgusting animal in charge of Wales, Mark Drakeford, had forced all sport to go behind closed doors again. The brainless step of stopping 50 people watching a game outside and keeping schools and other indoor spaces open is beyond parody. As much as I despise the Tories, I am grateful that for football's sake, they are in charge here. Though, it seems as if it will only be a matter of time before we suffer the same fate, at least for Wycombe games. During the day, the Eastern Counties League cancelled all their games for 27th December which perhaps was a sign of things to come. After a busy day at work, I got changed and left at 3.45. I took a leisurely drive down to Bristol and was at the Fortune House Chinese Takeaway in Yate two hours later. I went for my usual salt and pepper chips and also something new in stuffed crab claws. They were both nice, but quite pricey for the portion size, especially the chips. After eating my dinner, I drove back to the ground, getting there at 6.25. I stayed in my car for a bit, listening to the BBC 3CR Non-League show on BBC Sounds. I went in at 7, paying £6 to the friendly gateman. I went around the pitch getting some photos and also started putting together my blog on my laptop. 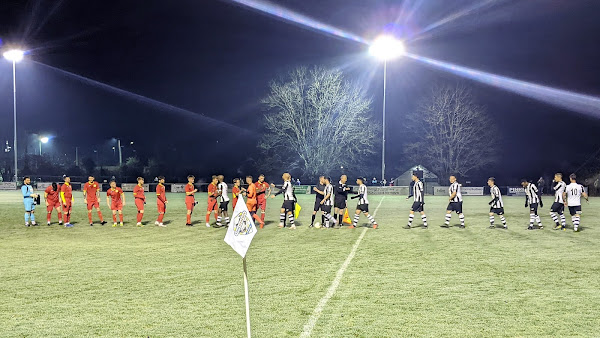 The hosts were having a tricky start to the season and sat second bottom at the time of kickoff.  They'd played in an entertaining 3-3 draw at Thornbury Town on Saturday, but had not tasted victory since the 6th November when they won 1-0 at Shrivenham. In between, they had suffered six straight defeats including a 5-0 reverse at Roman Glass St George and an 8-0 hammering at Bishops Cleeve. The two sides had drawn 2-2 in the reverse game on the opening day. The visitors had been in mixed form in the last six, having beaten Torpoint Athletic 2-0 in the FA Vase as well as a 4-3 win against Longlevens and a 1-0 win at Tuffley Rovers in the league. They'd lost 3-1 to Hamworthy United on Saturday in the FA Vase and 3-0 at Corsham Town in the league as well as 4-1 defeat at Cribbs. They sat in 14th, ten points above Chipping Sodbury. The visitors took the lead after a minute or so. A good ball over the top found Bailey Gallagher who finished cooly past the keeper. They were the better side although neither keeper was seriously tested. There was a yellow card apiece for fouls. Chipping Sodbury had a couple of free kicks, but they came to nothing. Chipping Sodbury came close on the hour mark, resulting in a corner, but the kick came to nothing. The game got very niggly later on and there were plenty of fouls. Chipping Sodbury staged a late rally but the visitors' defence held firm. 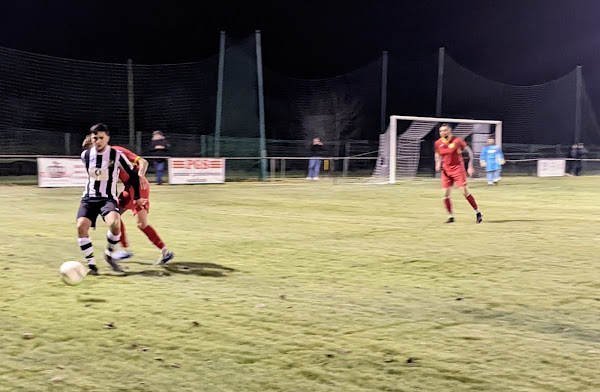 I'd had a very good Christmas Dinner pastie during the game which was well worth the £3.50 asking price. It had plenty in it, including a pig in blanket but could have done with being a bit hotter, having been kept in a cabinet. There were a number of hoppers in attendance and decent support from the visitors. With home fans too, that saw a total of 110 which was their highest of the season so far. It was an impressive turnout on what was a bitter night, although maybe people were getting in a game whilst the going was good. The temperature was 1 degree by the time I got back to the car. I had a good journey home, leaving at 9.45 and getting home at 11.20. The game had been OK, but not the greatest, but overall, Royal Wooton Bassett deserved their win. I stayed up for an hour before going to bed. I had a busy day of work the following day, with the store looking like a zombie apocalypse what with everyone rushing to get things for Christmas. I received bad news when I got home from work, with Wycombe's game against Cambridge being called off due to, you've guessed it, Covid cases. I was gutted as I was looking forward to my usual routine but I looked quickly for an alternative. A double of Honiton and Weymouth looks a goer, but as with everything at the moment, it is on wafer-thin foundations. 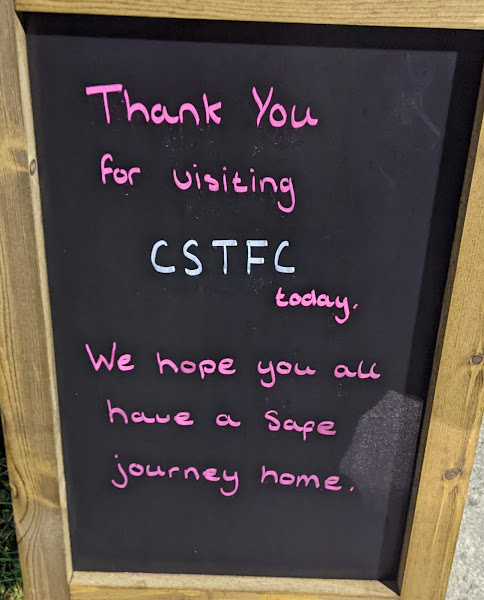 THE GROUND
The Ridings is a smart and well-kept venue, but rather bland. There are two stands, of the standard 50 seater metal effort and these, along with a terrace for around 70 are the only cover. There are some good steps of terracing in front of the bar, plus hard standing around the pitch. The town is nearby and offers a selection of takeaways or you can find a selection of food and drink at the ground. The Christmas Dinner pastie that I had was very good and the bar was small but welcoming. 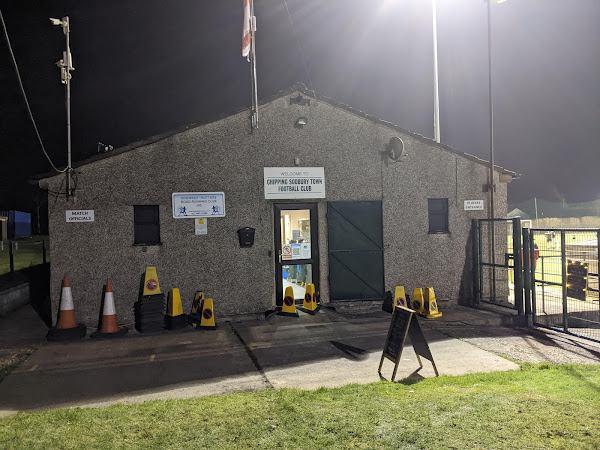 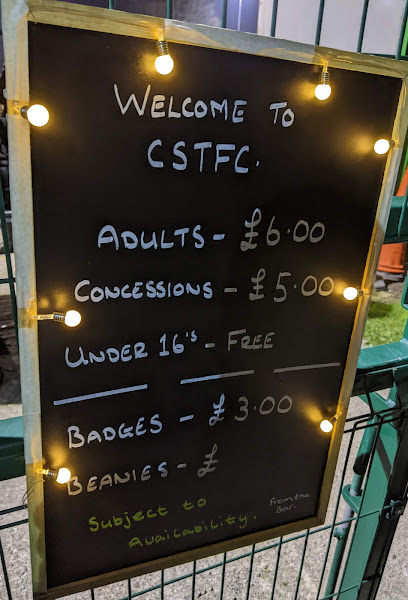 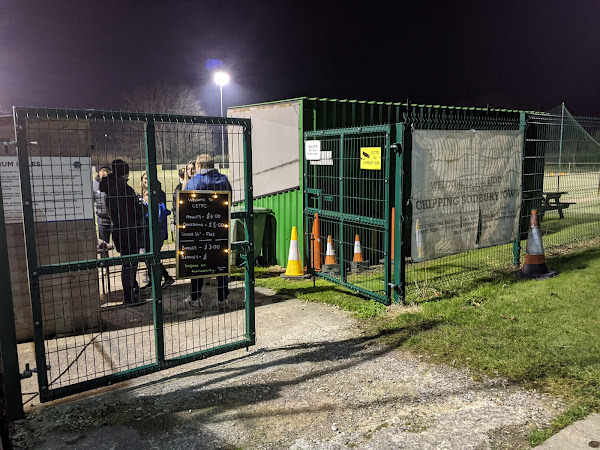 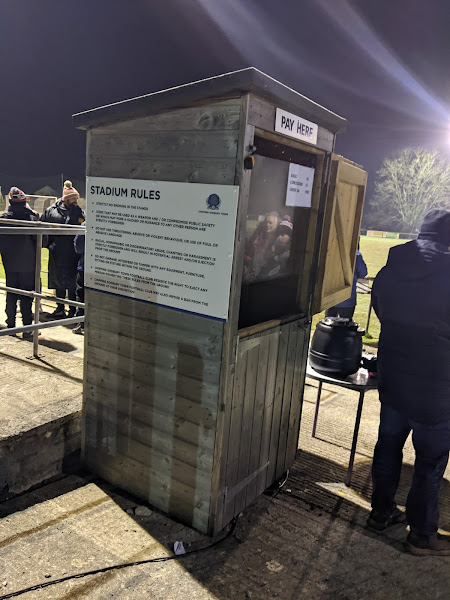 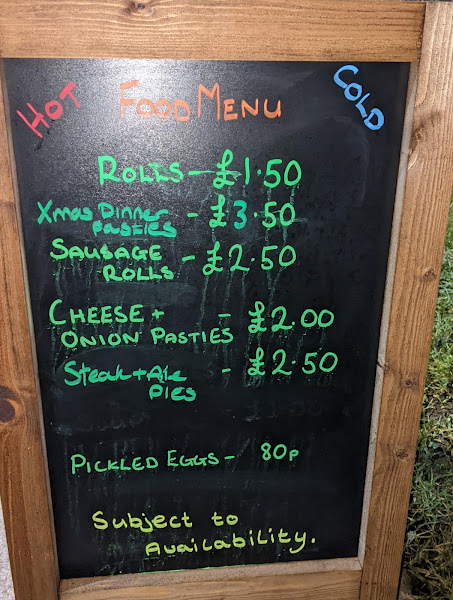 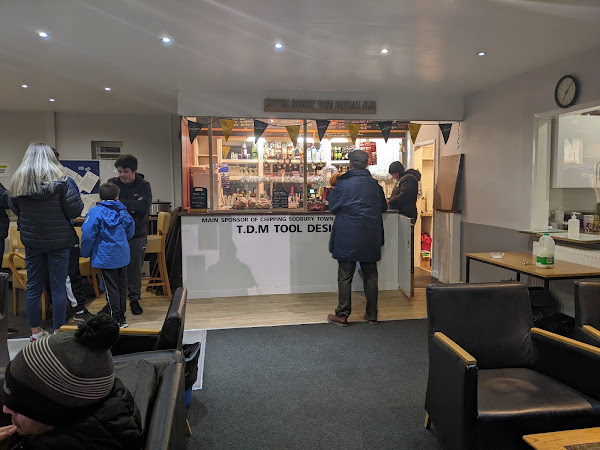 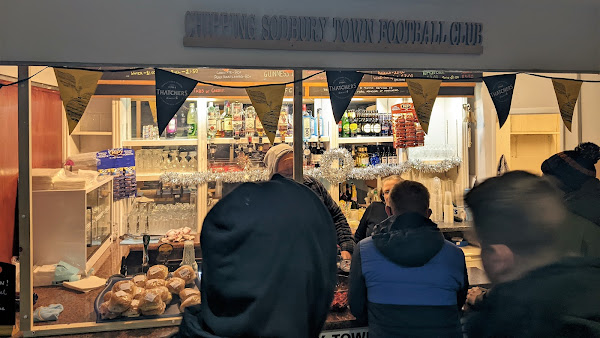 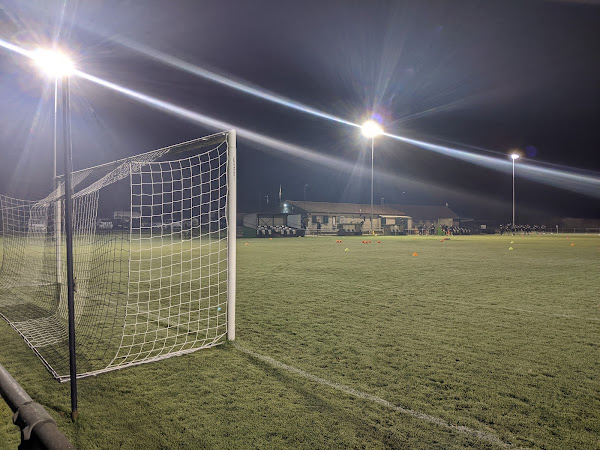 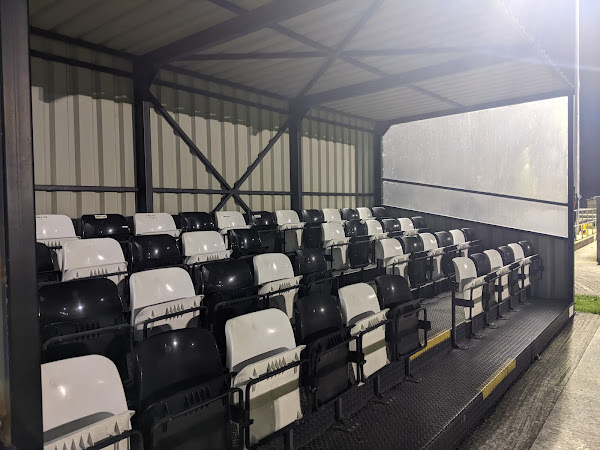 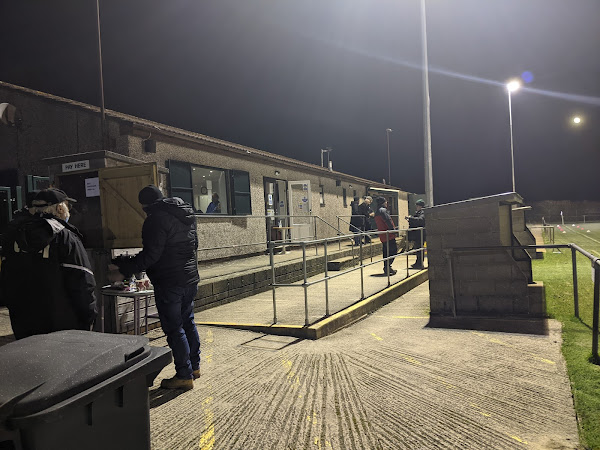 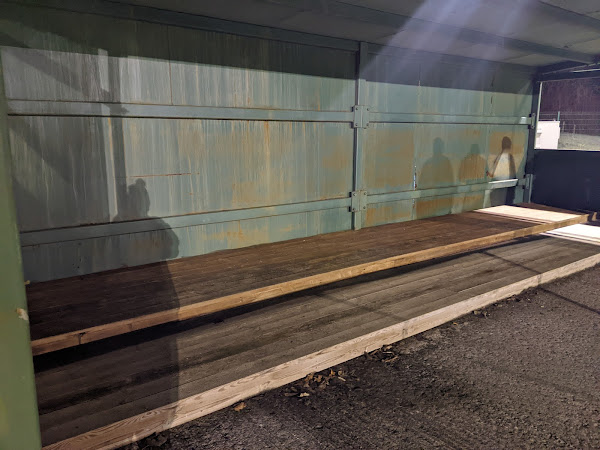 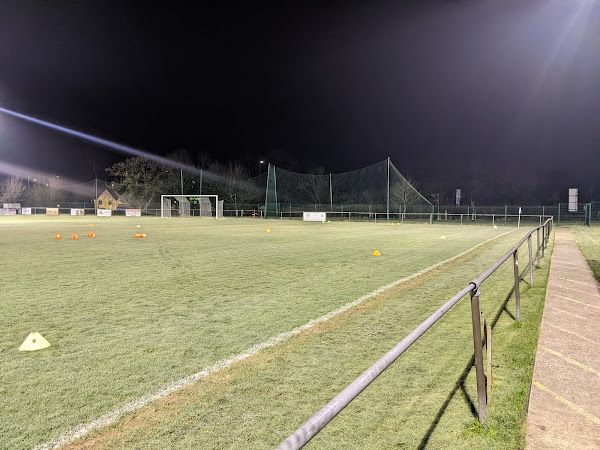 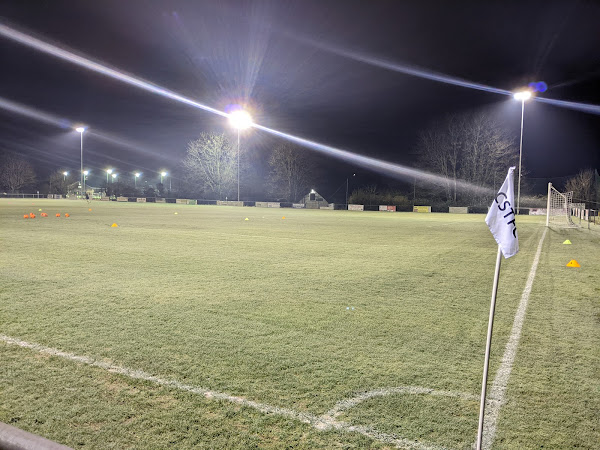 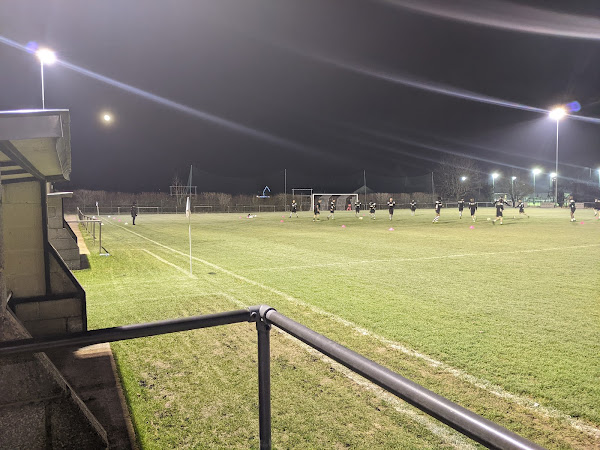