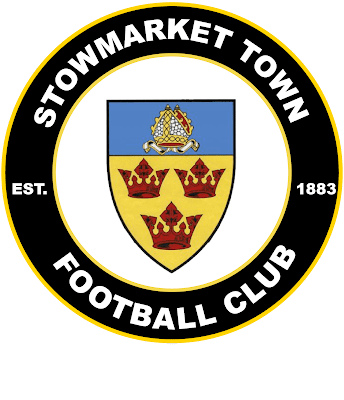 The club was established in 1883 following the merger of two local clubs. They were founder members of the Suffolk FA in 1885 and spent their early years playing in the Ipswich & District League and the Essex & Suffolk Border League. In 1953 they joined the Eastern Counties League where they remain to this day. Whilst the league was a single tier, finishes ranged from 4th on a number of occasions to rock bottom in 1982. The league expanded to a two-tier structure in 1988 with Stowmarket Town being placed in the Premier Division. They were runners-up to Wroxham in 1992 and remained in the Premier Division until 2005 when they were relegated to Division 1. There then followed a lean spell for the club with the worst finish coming in 2013 when they finished second-bottom of the step 6 league, the clubs worst finish since the introduction of the Non-League pyramid in 1982. Gradually, they recovered and by 2017 they bounced back in style, lifting the Division 1 title, scoring 108 goals in the process. Since returning to the Premier Division, they've finished 3rd and 4th. Prior to my abandoned visit, things were going even better for the club with them at the top of the league by a massive 18 points and unbeaten before the game. The season was later abandoned after 28 games due to the pandemic, but they remained unbeaten for those and the seven games that were played in the 2020/21 season. As a result, they were rewarded promotion as a consequence of the results across the two seasons and were admitted to the Isthmian D1 North.

The club's best-ever run in the FA Cup came during the 1953-54 season when they overcame Leiston,  Whitton United and Lowestoft Town, prior to losing 5-0 to Cambridge United in the 4th Qualifying Round. In more recent times, they reached the 3rd Qualifying Round in 2001, prior to a 2-1 defeat at Belper Town. In the FA Vase, Stowmarket Town reached the 5th Round in 2020. They beat Colney Heath, Stansted and Glebe before a defeat at Wroxham Town Local cup wins include the Essex & Suffolk Border League Cup (five times), the Suffolk Junior Cup (1907), the Suffolk Premier Cup (four times) and the Suffolk Senior Cup (eight times). The record attendance at their current ground is 1,200 for a friendly against Ipswich Town in 1984. The small town of Stowmarket has a population of just under 19,300 and is located between the bigger towns of Bury St Edmonds & Ipswich. 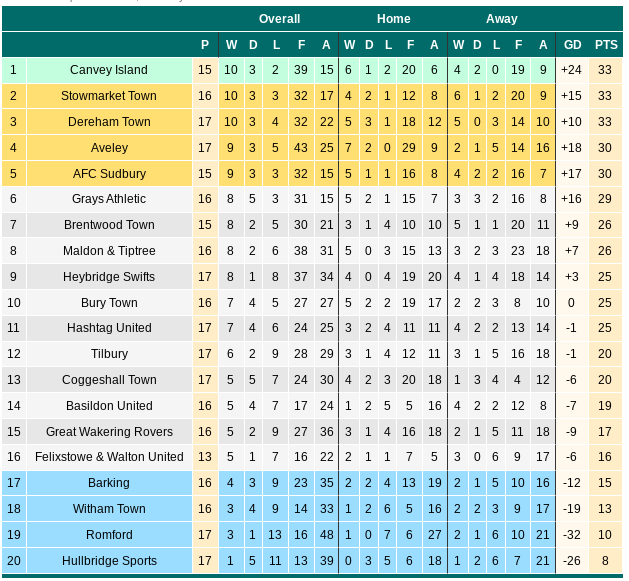 MY VISIT
As was the trend with recent weeks, the options for this Tuesday were extremely limited again. There were only two new 'ticks' possible within a reasonable distance - Thornbury Town and Stowmarket Town. The latter was what Anwar opted for and although it would work out pricier for me, I had already started my blog. I'd originally intended to visit the ground on 28th December 2019 for their Eastern Counties Premier game against Walsham Le Willows. However, after arriving at the game with fellow hopper Chris, the referee decided to call the game off at 2:57, refusing to allow the Stowmarket groundsman ten minutes to sort the problem out. The next possible visit was the game on 5th December 2020 for the FA Vase game against Eynesbury Rovers. However, after they implemented what I felt was heavy-handed restrictions - forcing people to wear masks, despite it being outside. They also had no food or drink for sale in the ground. With that in mind, Colin, Anwar and I headed for Wroxham. We watched a cracking 3-3 draw with MK Irish with the visitors eventually prevailing on penalties. I think we saw the better game with Stowmarket thrashing Eynesbury Rovers 5-0 in our original choice of game. 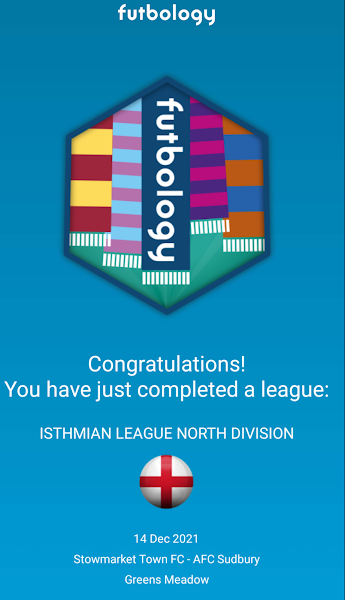 Ideally, I'd have saved it for a Saturday on the train, even with it weighing in at around £40. There were some decent pubs in the town that I fancied visiting, but it wasn't to be. To get the best price, I'd have to book well in advance and risk the weather or government restrictions ruining things. With all things considered and the limited option on offer on the day of the visit, I decided to drive instead. It had been a busy day at work on Monday, with the store packed quite early in the countdown to Christmas. It didn't help that I had a cold that Colin had kindly gifted me. Thankfully, the vast majority of people had masked up as required by law, so it wasn't such an issue feeling like I was in a tin of sardines. I'd finalised plans with Anwar on Sunday night, arranging to stop in an area where there was a good choice of takeaways for our pre-match meal. I was glad of my day off on Tuesday and walked to town and back for exercise. After spending an hour at home, I left just after 3.30. I noted that a fair few games had been called off due to the weather but there had been barely any rain in the East. I got to Anwar just after 4 and as usual, getting out of Aylesbury was slow thanks to their inadequate road system. It was busy as expected, although Waze directed me via the back routes. It could, however, do nothing about an accident on the A428, just after St Neots. After sitting in traffic for ages, we gave up, turned around and went via St Ives. It limited plans for dinner, adding an hour on to the journey with everything taken into consideration. We got to Stowmarket at 7.15 and had a portion of chips from a takeaway which were OK but nothing special. From there, we made our way to the ground. It was very busy, so we had to park quite a way away in a side street before walking to the ground. We got there around 7.35, paying a reasonable £9 to get in. There was one notable name in the Stowmarket Town lineup. Chris Casement had played 12 games for Wycombe on loan from Ipswich in 2009. Following a long spell in Ireland he had recently returned to England to play for the hosts, lining up in their defence. 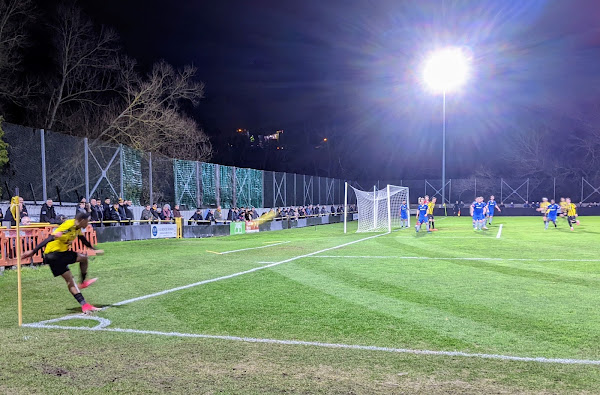 Stowmarket Town were in great form, unbeaten since their 4-1 defeat against Tilbury on 26th October. Since then, they had beaten Felixstowe & Walton United 2-0, won 2-0 at Basildon United and Grays Athletic, drawn 0-0 with Hashtag United, won 6-1 at Barking, beaten Aveley 2-1 and on Saturday won 1-0 at Canvey Island. AFC Sudbury meanwhile, had been in mixed form since they were unlucky to lose 4-0 to Colchester United in the FA Cup. They'd won 5-0 at Heybridge Swifts, 4-2 against Tilbury and 1-0 against Barking. They'd drawn 1-1 at Grays Athletic, 2-2 at Coggeshall Town and 1-1 at Hullbridge Sports. They had also lost 3-2 at Hashtag United and 2-1 at Aveley. AFC Sudbury had the better of the opening exchanges, but the hosts soon took control. They took the lead on 32 minutes when a low ball was put in from the right. A couple of visiting defenders failed to clear and it was left to Luke Brown to slot home from around ten yards. Brown doubled the lead eight minutes later, flicking the ball home from around six yards. The same player completed his hat trick on 53 minutes. It was another poachers goal from around the same distance and that completed the scoring for the night. It sent the hosts top and deservedly so. AFC Sudbury might rue some of their missed chances early on as it could have been a different story altogether if one had gone in. 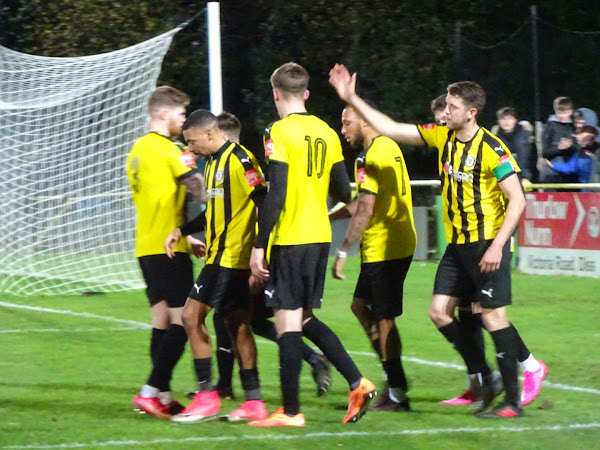 At half time, I'd had an excellent Fiery Chicken burger for £4.50 that was far better than what I'd had outside. I wished I'd skipped the chippy and gone straight in, but what's done, was done. There had been 400 in attendance, with a decent number from AFC Sudbury. The hosts went top with the win and for me, I completed the Isthmian D1 North. The vast majority would have gone home happy though and we ourselves headed off around 9.50 after walking back to the car. We went home via the A12 and M25 and although it was a long journey for midweek, it did at least go smoothly. Greatest Hits Radio provided the soundtrack as usual and I dropped Anwar off at 11.50. My usual route home was closed with no diversion signposted and so Waze was called upon again to direct me via a back route. It took a bit longer than usual but I was back at 0:25. I stayed up for just under an hour before going to sleep. With only just over 4 hours of sleep, I didn't feel too bad the following day but did my blog the following evening. 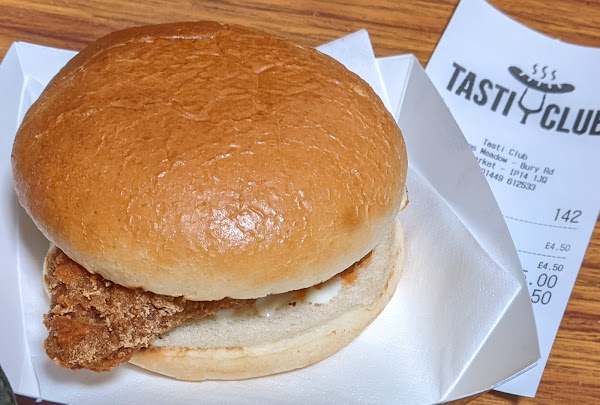 I first visited the ground in 2016 when on my way to Needham Market and was quite impressed at what, at the time, was a step 6 ground. Then, in 2019 for my aborted visit, the stadium was still a good one for step 5. Now they are at step 4, it is not so impressive but it is at least unique. All the covered accommodation is along one side where you go in and comprises of around 200 seats and around 300 covered terrace spaces. Both sides are quite a way from the pitch and the far side is a lot lower down than the near one. There's an excellent tea bar at the ground, offering some interesting options. I didn't check out the bar but the town is not far away. The Walnut Tree is one excellent pub of a few and there is also a Wetherspoons and the usual range of takeaways. 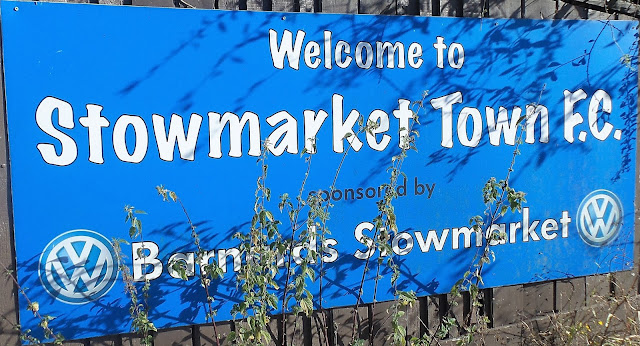 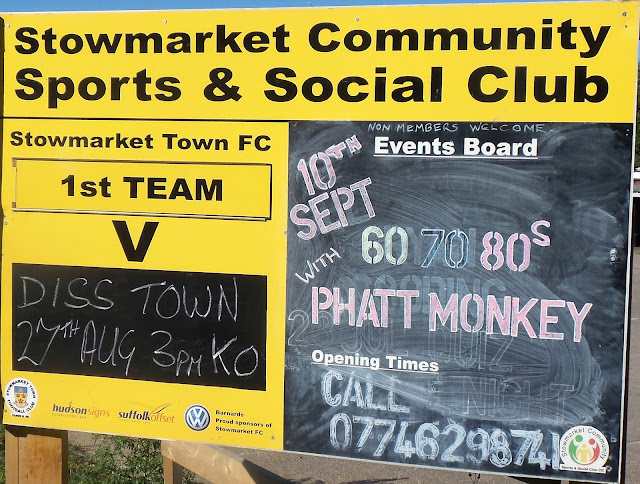 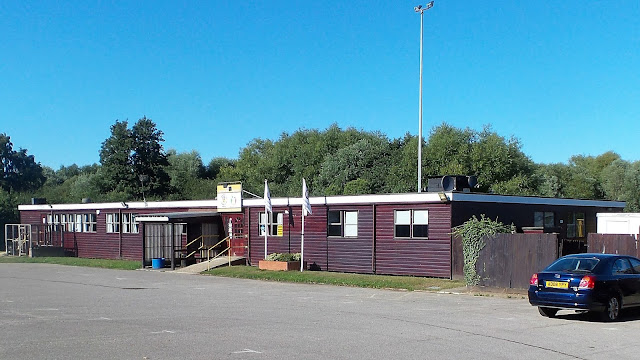 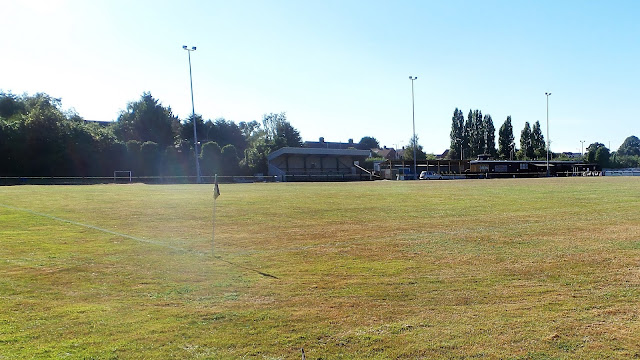 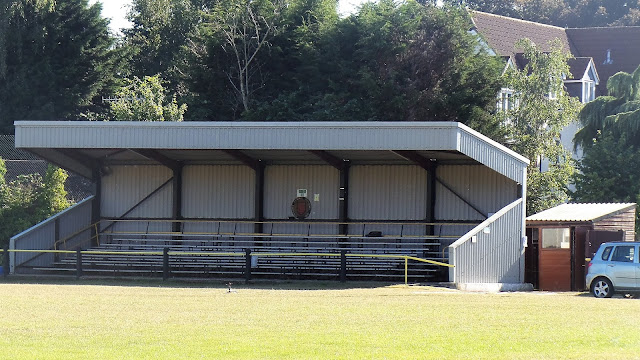 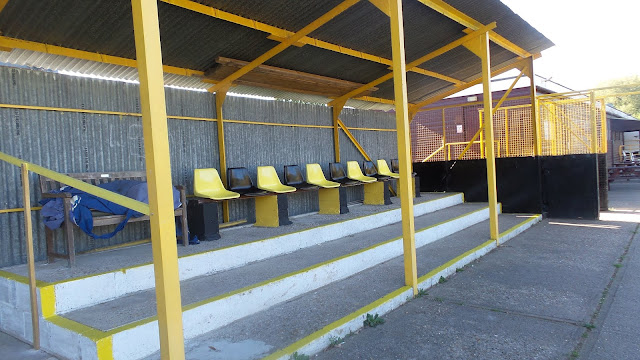 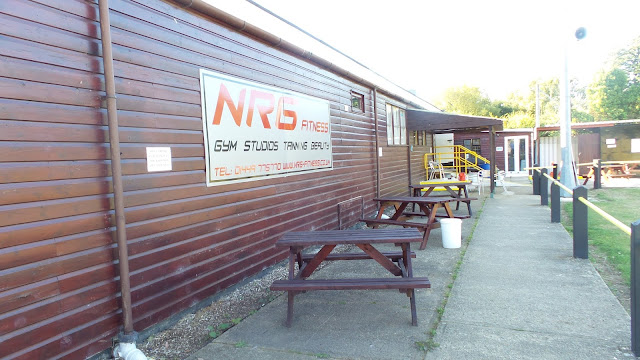 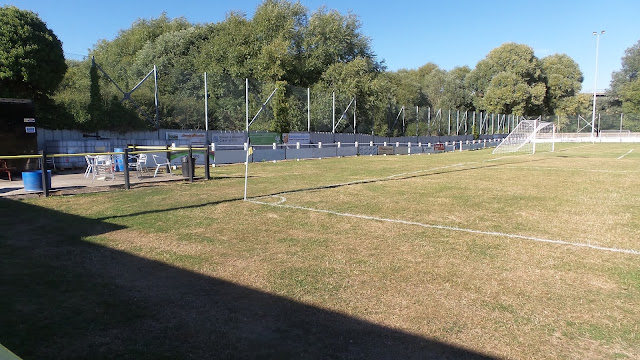 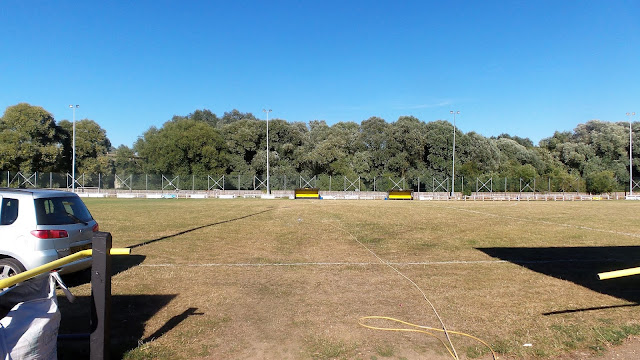 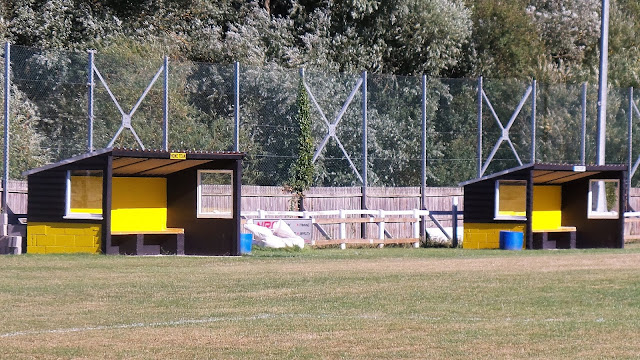 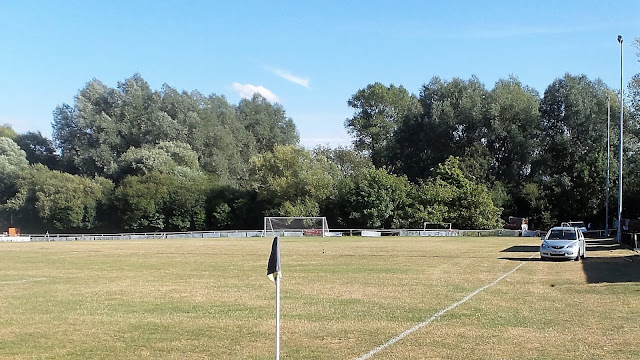 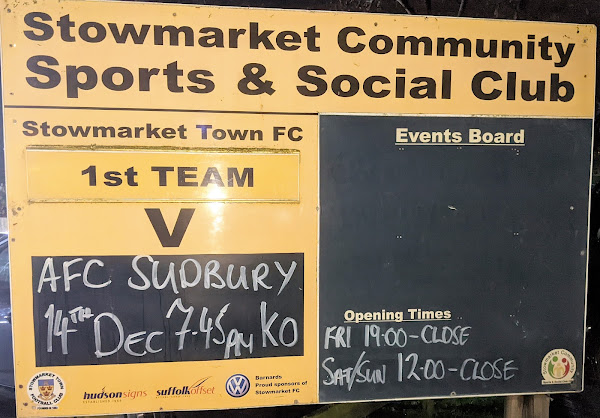 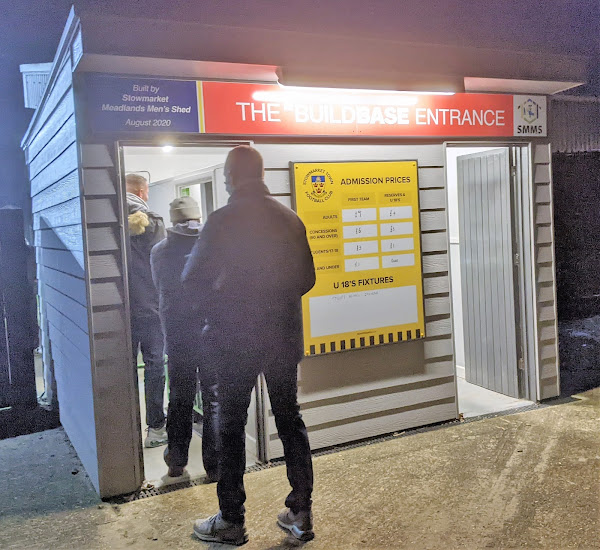 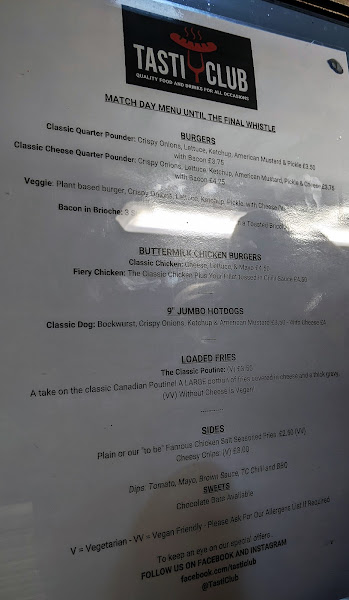 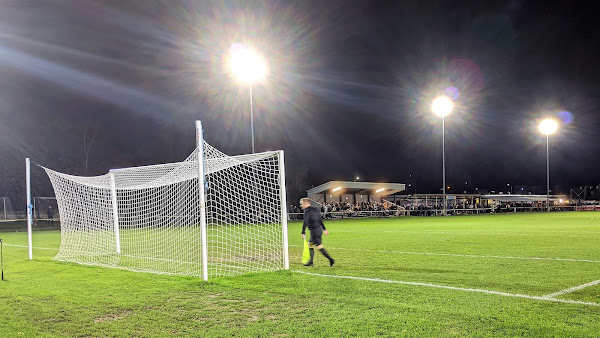 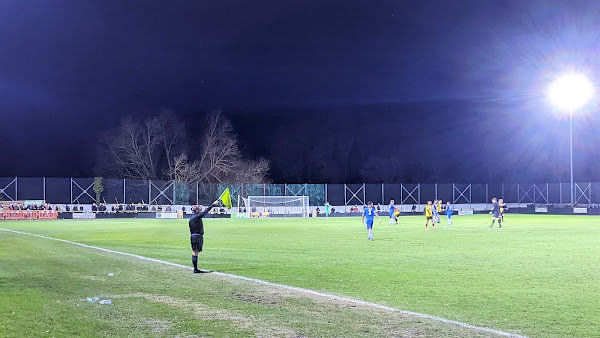 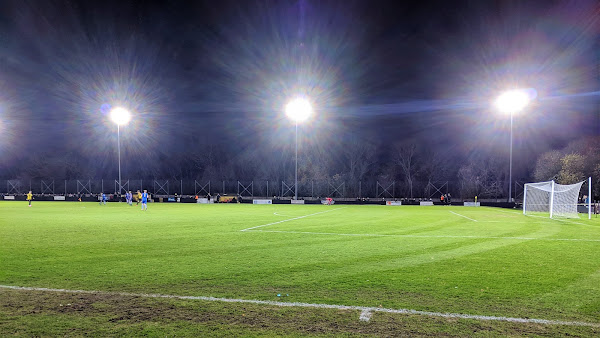 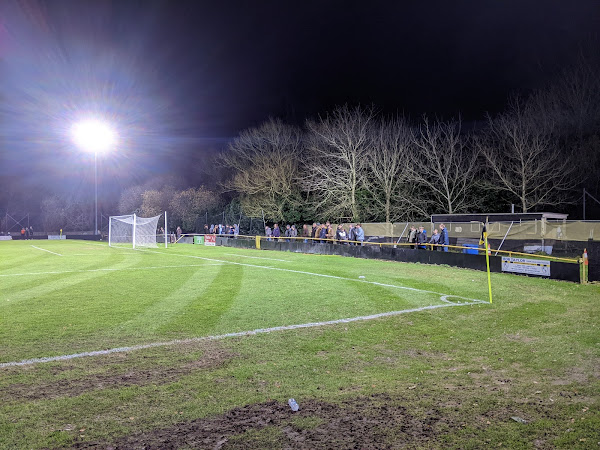