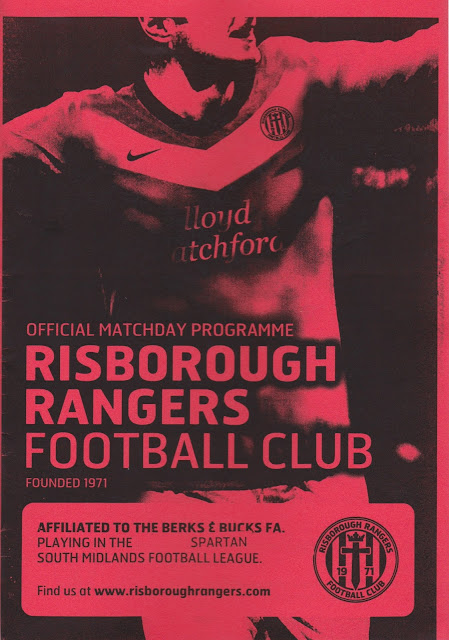 Risborough Rangers only recently installed floodlights this season, mainly due to their promotion back to Division 1 of the Spartan South Midlands League. They had been there previously but had been relegated in the 2002-03 season and it had taken all this time for them to work their way back. The club was founded in 1970 as a junior team, eventually progressing into and adult team and playing in the Wycombe Senior League. They joined the South Midlands League and after gaining promotion in the 1992/93 season had their record league finish of 6th in the senior division the following season. Following the merger of the South Midlands and Spartan Leagues, they were placed in the Senior Division (renamed Division 1) before their relegation in 2003. They had never participated in the FA Cup or FA Vase but had won the Anagram Trophy in 2011/12 and were runners up in the Spartan South Midlands Division 2 Cup the season after. The most famous player to play for the club was Jefferson Louis who started his career at Risborough Rangers before going onto play for around 30 clubs including Oxford United, Bristol Rovers and Mansfield Town in the football league. The team had been doing fairly well, clear of relegation and in 14th place in the league at the time of this game. 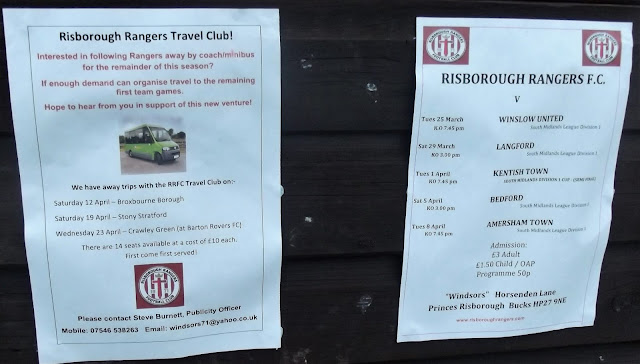 I had quite a few options for tonight. I knew I would be without fellow hopper Anwar as he was off to the local derby between Aylesbury and Aylesbury United. So I needed something local, or somewhere else that someone could come with me and help me out with fuel costs. Whitehawk v Hayes and Yeading were one of the top choices, but the Hayes fan who was going to come with me, Corey, was skint. I then looked at some local step 5 games, with Ash United and Reading Town being favourites. I did initially pick Reading Town but then looking at the potential traffic and the fact that it was further than expected made me look closer to home. The Risborough Rangers secretary posted regularly on the Gasroom in an attempt to get Wycombe fans down there. I thought they missed a trick by not putting their games on anything other than the standard Tuesday and Saturday and could have attracted other groundhoppers down there with a bit of imagination, but as Anwar had already been there I decided to make the trip, especially as it was a cup semi-final and only cost £3 to get in and 50p for a programme. 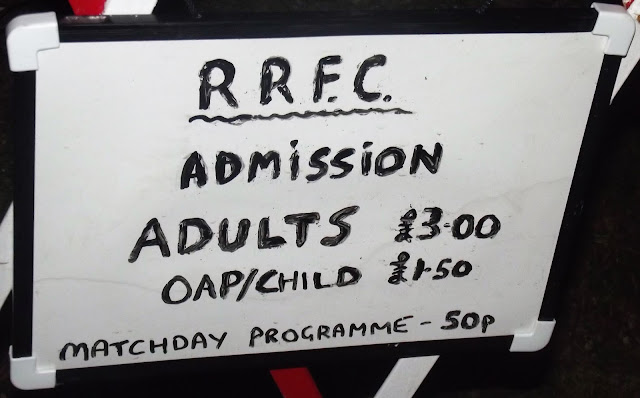 I had the day off from work and actually got a great nights sleep, nearly 12 hours in fact. Even then, I didn't feel the most energetic I had ever done which likely led to me going as locally as possible tonight. I had some parcels to post from stuff I had sold on eBay so I walked down our local post office before going into town and paying a cheque in. I was annoyed about not yet receiving my new phone - Scan Computers had promised it would be delivered by 9am Monday morning to pick up at Argos but they had only dispatched it yesterday and at late afternoon it had still not arrived for me to pick up. I could have got it £30 cheaper and in my preferred colour of white if I had held off and looked on eBay today, so I was pretty miffed, especially as it would help with typing my blog while at football thanks to its bigger screen. In any case, I could leave home late for tonight's game, so after having a spot of dinner I left at 6.50PM. I got an email that my phone would be ready for collection just before I left so I will have to pick that up tomorrow. After a fairly decent journey, albeit one with the usual perils of rush hour traffic, I arrived at the ground at 7.25pm. The car park was already filling up and they had to open an overflow. I paid £3 for entry and 50p for a surprisingly thick programme given the price. I learnt from the gateman that Kentish Town only had 7 players present so far as the rest were caught in traffic. He was a Wycombe fan too and reckoned it would be very tight staying up, which I have to agree with. I then went to get some pictures of the ground, starting in the clubhouse where I bumped into Steve the press officer who posts about the games on the Gasroom, which is the Wycombe Wanderers message board. He shook my hand and everyone at the club had been really friendly so far. I also saw one of the ladies who sells 50/50 tickets at Wycombe Wanderers, in fact, she sells my Dad a ticket every game. 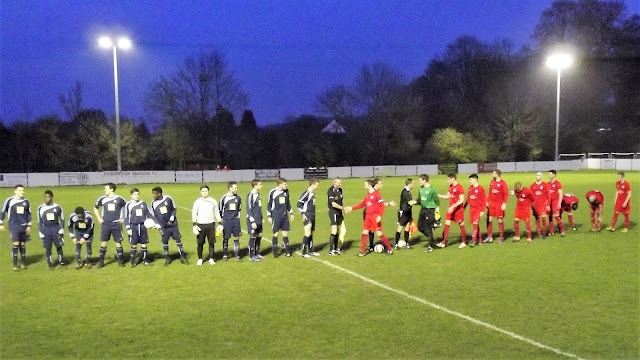 After getting some nice pictures I settled down in a seat along the side of the pitch and typed some of my blog. In the end the game kicked off at 8pm, once all the Kentish Town players had arrived. The game started with Risborough having the best of the opening 5 minutes but Kentish Town with the enthusiastic and vocal support of an Irishman who I presume was their chairman, started to come back into it. On 17 minutes the home side had the best chances of the game so far, a game of pinball ensued in the area but the ball wouldn't go in. Risborough took the lead on 23 minutes after a foul in the area and the resulting penalty was put away successfully. It continued to be a fast flowing game and chances came and went at both ends. On 40 minutes the Risborough keeper was slightly injured following a collision and had to receive treatment before he could carry on. Kentish Town had a real penalty appeal on the stroke of half time but were denied by the referee. At half time I chatted to Steve, the Risborough press officer and he mentioned that he knew Anwar and a couple of others from Wycombe. The second half continued much in the same vein, with chances for both sides, but again it was Risborough that seized the initiative. 53 minutes were on the clock when they scored from a good free kick, though maybe the Kentish Town keeper might have liked to get more on it. From then on, it was all one-way traffic. It was all over on 68 minutes, a shot from inside the area went in off the left-hand post. The visitors' misery was complete 9 minutes of the time as a volley from the edge of the area made it 4-0 and game set and match. Before I left, I said goodbye to Steve who had been a great host and made it a good night, as had others that were part of the club. It had been a good evening for my 350th ground and 104th match of the season. The journey home was a lot quicker, I listened to TalkSPORT who were taking about Man Utd's draw with Munich, a draw which gives the rank outsiders a chance in the away leg in Munich. I got home within 20 minutes of leaving at 10.10, getting to bed around an hour later.

WINDSORS is a pretty decent venue given the clubs status and is certainly a pleasant place to watch an early spring evening game. The main spectator area is on the side that you enter and has around 100 seats in all. It also houses a basic clubhouse which has plenty of stuff from the clubs history adorning the walls. Outside there was a decent looking tea bar with a good range of both hot and cold food and drinks. The rest of the ground is open apart from a small shelter on the other side with seating for around 7 people, maybe standing for a few more. I'd certainly recommend a visit here as they are a really friendly club and the day out is great value with some of the cheapest prices in football. The town is also fairly nearby if you want to make a day of it. 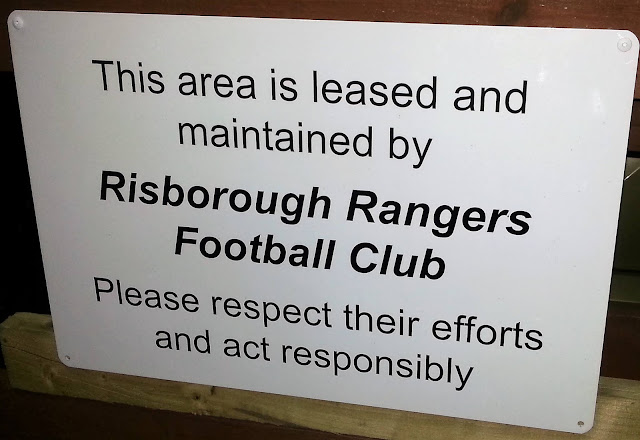 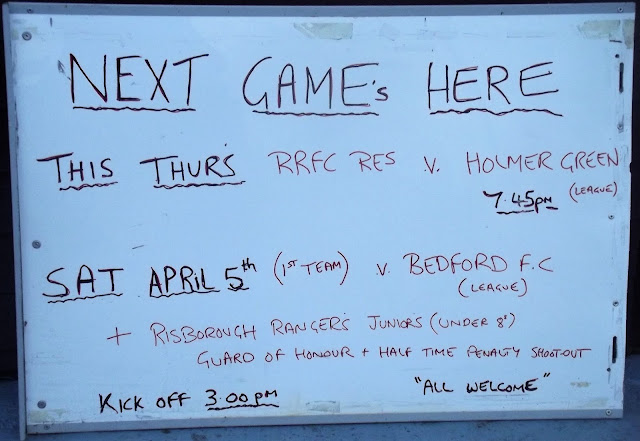 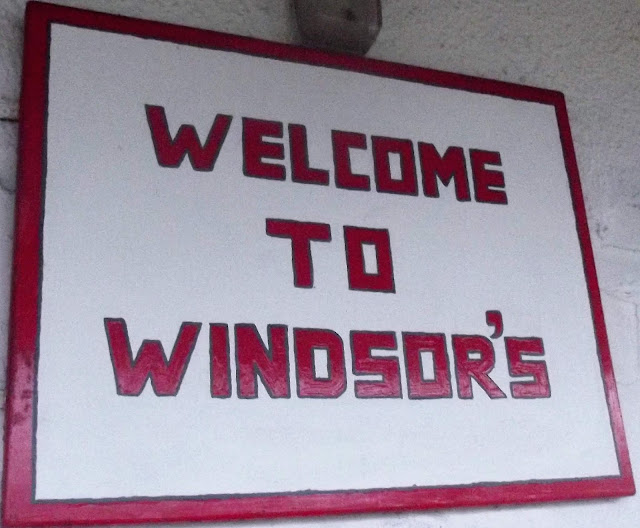 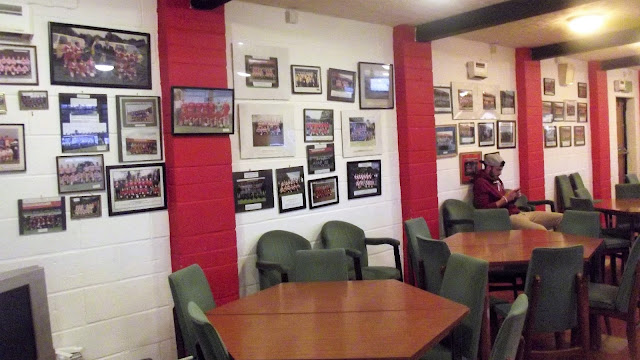 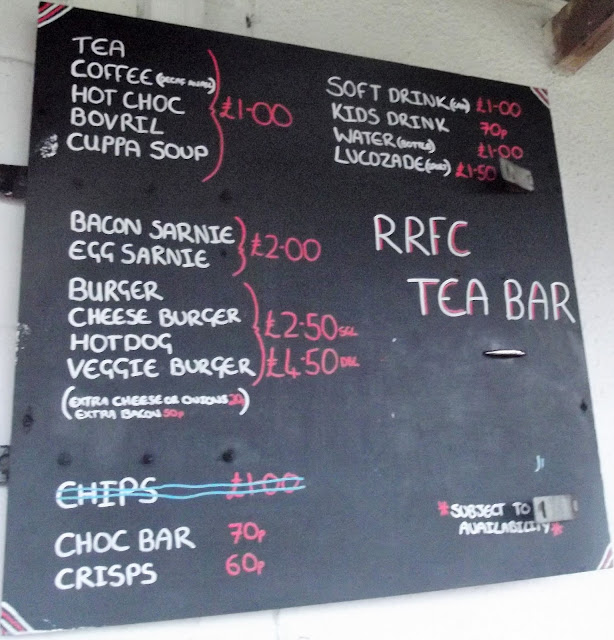 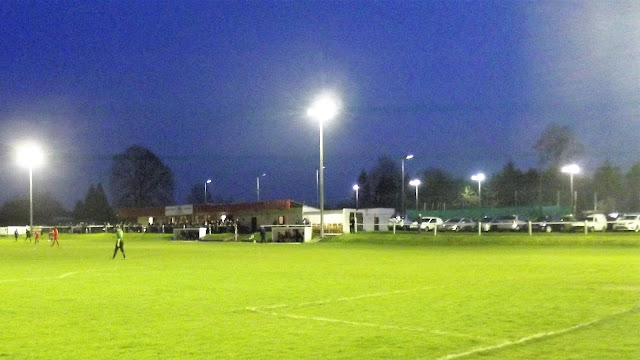 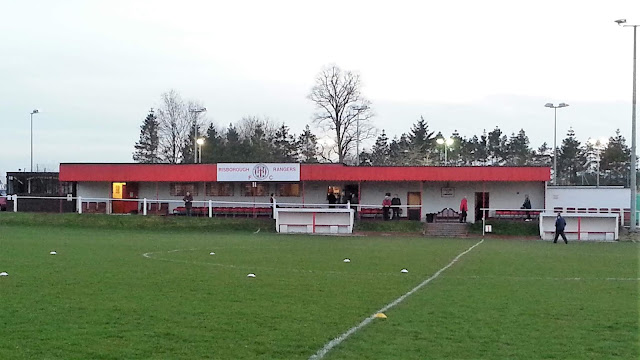 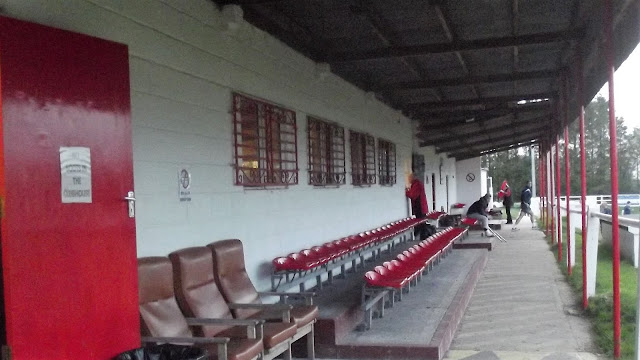 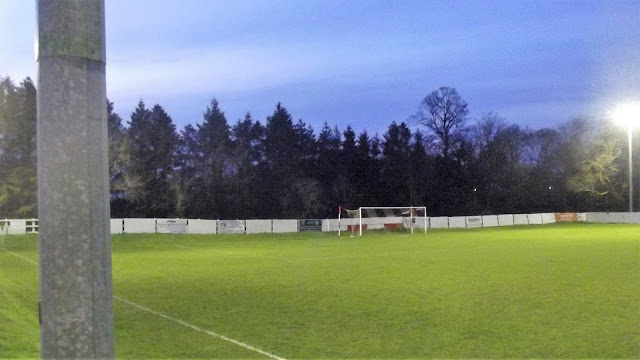 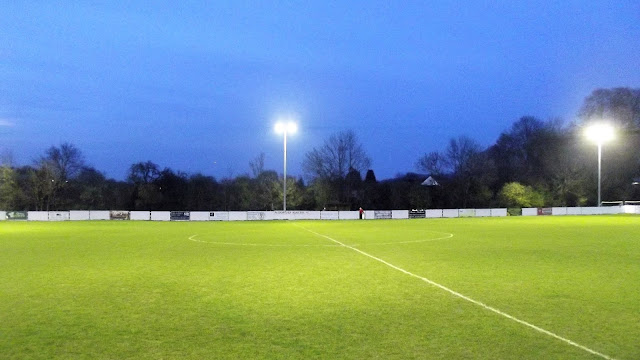 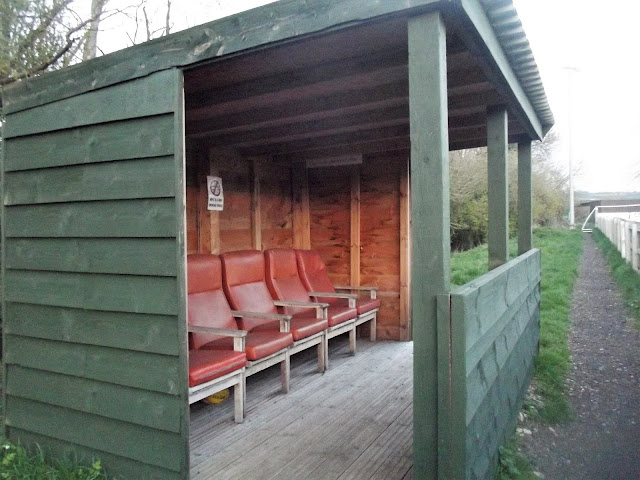 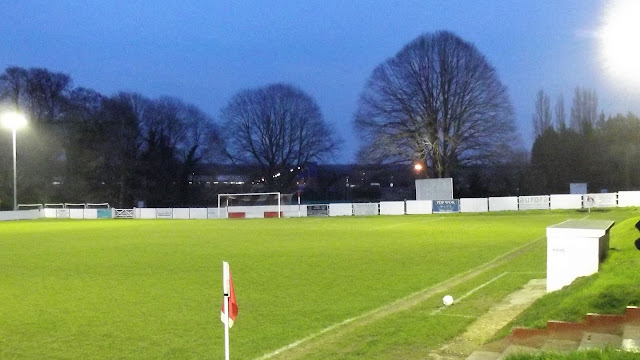 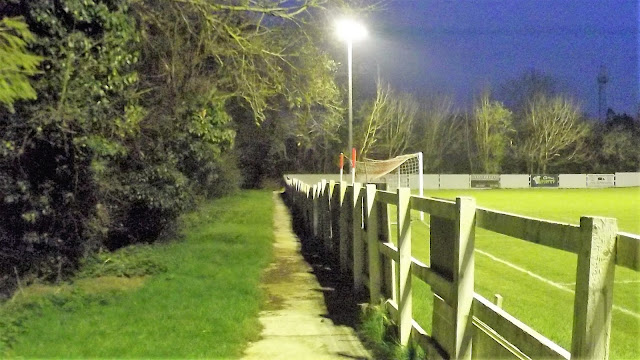