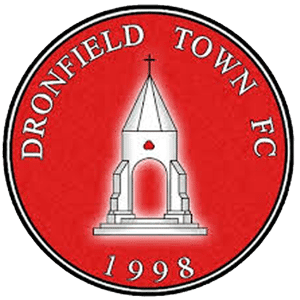 Though there were several incarnations of Dronfield Town in the past, the current club was established in 1998. They joined the Hope Valley Amateur League in 2004, progressing rapidly through its divisions. The same can be said of their spell in the Midland Regional Alliance where the club played from 2005 until 2009. That year, they joined the Central Midlands League Premier Division, finishing as runners-up to Church Warsop Miners Welfare and earning promotion to the Supreme Division. A 7th place finish in their first season was a steady start before the league split into North & South divisions in 2011. The 2011/12 season saw a 3rd place finish before Dronfield Town won the title the following season. In 2013, the club took promotion to the Northern Counties East Division 1 where they remain to this day. Following a series of bottom half finishes, form improved greatly and a 6th place finish was achieved.

Due to their league status, Dronfield Town are yet to play in the FA Cup. They have played in the FA Vase though, the best run coming last season when victories over Harborough Town (3-1) and at Barrow Town (1-0) were enjoyed before a 3-1 defeat at Walsall Wood in the 2nd Round. Local cup wins include the Central Midlands League Cup in 2012 and various cups whilst they were playing in the Hope Valley Amateur League. The town of Dronfield has a population of just over 21,000, the name of the town coming from the nearby River Drone. The town is situated halfway between Chesterfield & Sheffield and is also home to Sheffield FC, the oldest football club in the world. A number of famous footballers come from the town, including Gary Cahill, Tony Currie, Howard Kendall and Kevin Pressman. 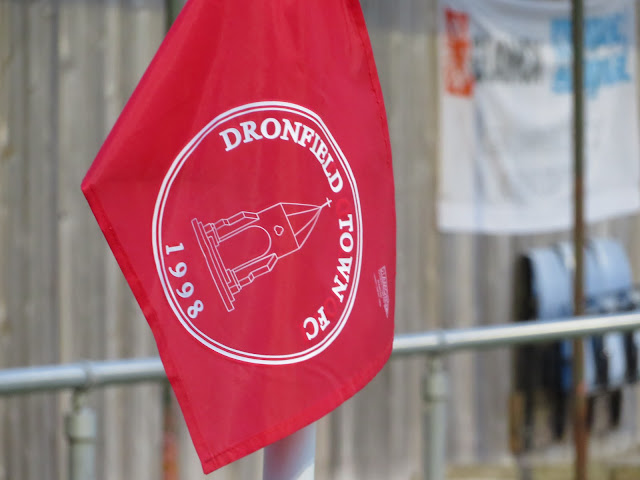 I was glad to have a week off work, well 5 days anyway. The rest would be most welcome as I'd been pretty tired recently. Of course, there would be football on 4 of the days, a pub meal ruling out me making a clean sweep. Three of those would be with fellow hopper Chris, who I'd not seen for a while. More often than not, these trips involve heading north on the M1 and this was no exception, with us heading to Dronfield Town v Teversal. The day of the game came and I had a reasonable night’s sleep, though not as much as I want, waking at 6.30. I spent a few hours at home, having breakfast and a bath. I then walked down town, picking up some things before getting a lift back before having lunch and spending the early afternoon at home. I left later than intended, mainly due to issues with getting my phone connected to my new car. Combined with Milton Keynes being a pain to get through, I was 15 minutes late to meet Chris at 4.15. The hassle with Milton Keynes continued, another 35 minutes added to out journey as the M1 was knackered around there, so we had to join it at Northampton. The delay kyboshed chances of a pre-match curry, but the rest of the journey was fine. We had to settle for a takeaway from a place called Fat Sam’s where we had a half-pound chilli burger and chips each. We took it to the ground, sitting on the grass bank and watching the cricket. We got to the ground just before 7, entry being free. The food selection in the bar was decent and I wished I’d waited, nevertheless we both had a pint of Stowford Press before going out to watch the game. 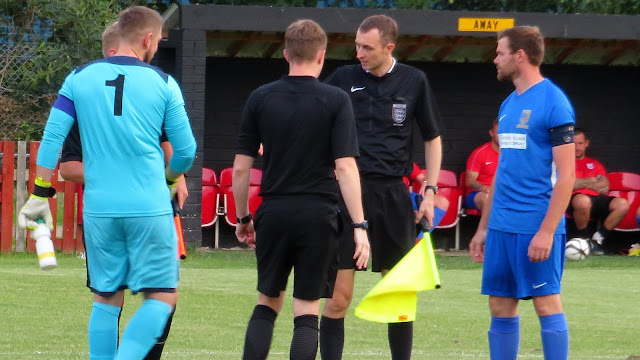 It was a very bright start to proceedings and Dronfield were ahead within five minutes thanks to a lovely chip over the keeper from just outside the area. Teversal equalised a couple of minutes later - I was lucky enough to capture Danny O'Donnell's free-kick going in off the post. Both sides had chances but it was Dronfield who were on top. Just before half time, they took the lead, a good run through the defence, the keeper saved the initial shot but it was followed up from close range. In the second half, the hosts ran riot, getting the third after 47 minutes when the ball was bundled home following a series of corners. A few minutes later, it was 4-1 when a Dronfield man controlled the ball with his left and before curling into the top corner with his right foot. Just after the hour mark, Teversal had a couple of chances, both times the Dronfield keeper produced great saves to tip the ball around the posts, but the follow-up corners came to nothing. After 78 minutes, it was 5-1, a good through ball found a Dronfield man who shot home on the turn from 12 yards.  They came close to making it six a minute later, but the ball was shot over from a tight angle. It only took until 83 minutes for it to be 6-1, a shot on the turn from the edge of the area, although poor marking did play a part. The seventh came on 85 minutes, a lose ball was chased down and with the goalkeeper stranded, the ball was chipped over him and into the net. Just before full time, it was 8-1, this time the furious Teversal goalkeeper could only parry a shot before it was followed up by an unmarked Dronfield man. The final scoreline was harsh on Teversal, maybe a two or three-goal margin would have been appropriate.


I must admit to having missed one of the goals - the one on 47 minutes which I found thanks to the Teversal Twitter feed. It had been good entertainment for the 40 in attendance and Dronfield had brilliant hosts - just as Teversal had been when I visited them in January 2015 (dodging Mansfield 0-0 Wycombe in the process). The journey home saw the need for us to come off the M1 for a bit around Derby, but after filling up with petrol at Tesco, I dropped Chris off at 11.50. Union Jack Radio kept us company on the way back, with me switching to an Alan Partridge podcast for the final leg of the journey. I went the long way round, via the M1 and M25 to avoid the wildlife that had damaged my last car, with a couple of foxes scared off by my lights being on full beam. I arrived home, unscathed at 12.55. With no work to worry about in the morning, I was pleased to spend a couple of hours typing my blog, catching up and watching old Match Of The Day shows on YouTube before going to bed in the early hours after a few drinks. 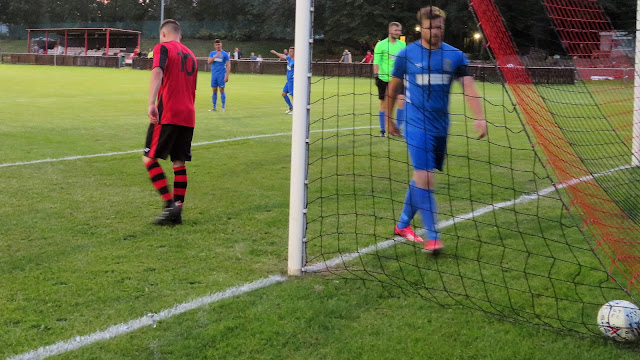 STONELOW FIELDS or the HE BARNES STADIUM as it is known for sponsorship purposes is a small but homely stadium. The capacity is rated as just 500, this is due to one side being closed to the public, possibly two sides as I didn't venture up the other end which is adjacent to the local cricket club. There's a couple of covered areas - a small stand which holds 80, plus cover for around 20 more behind the goal. It's a ground with plenty of character and it has a bar with a small range of drinks and a tea bar with a decent selection. Further afield, the Mint Leaf Indian Restaurant is a 5-minute walk, whilst the town is just over 10 minutes away. This has a decent takeaway called Fat Sam's whilst the pick of the pubs appears to be The Dronfield Arms, though I didn't get the chance to visit. 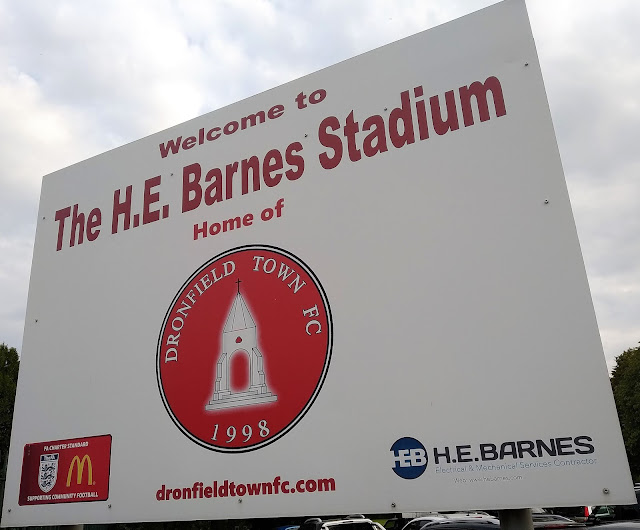 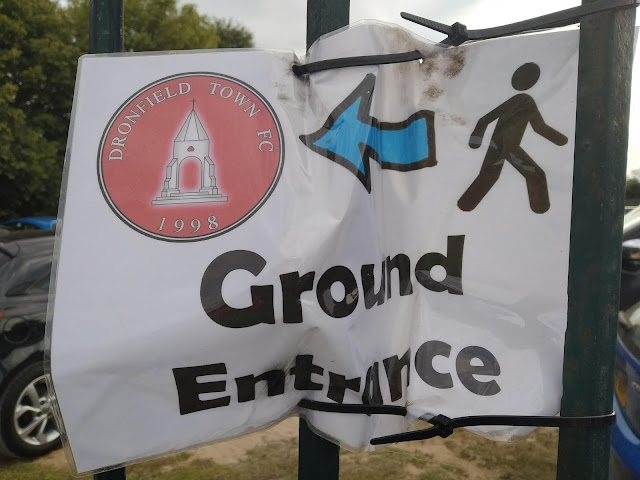 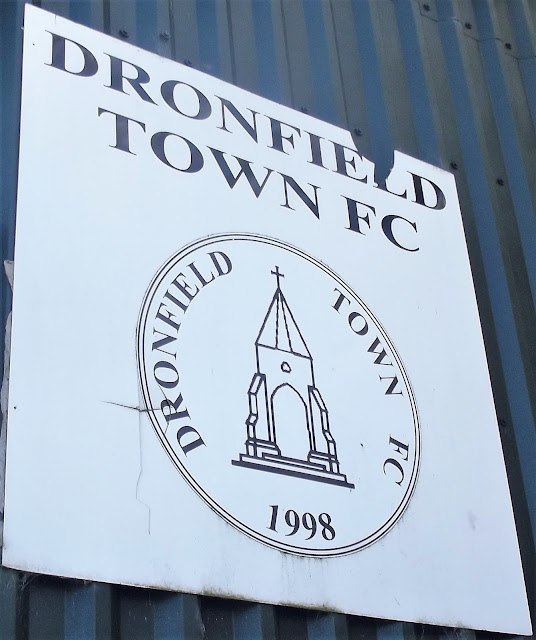 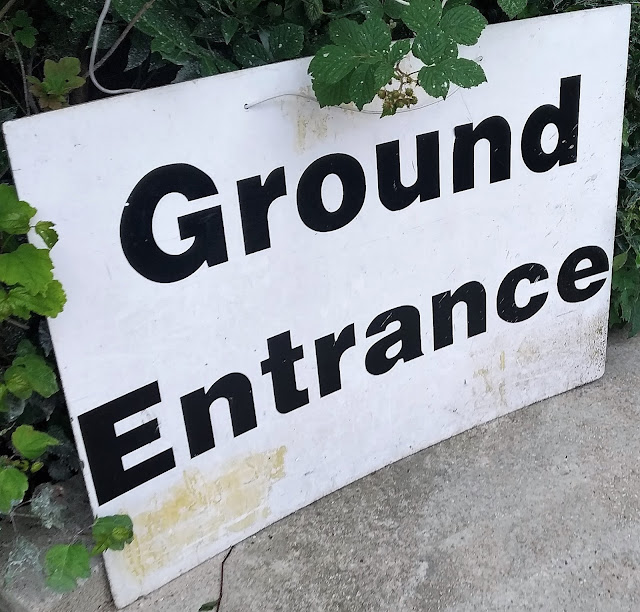 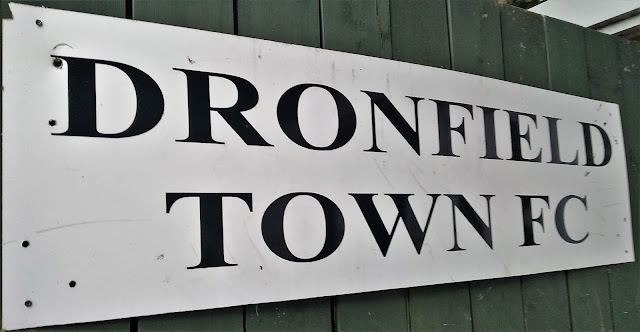 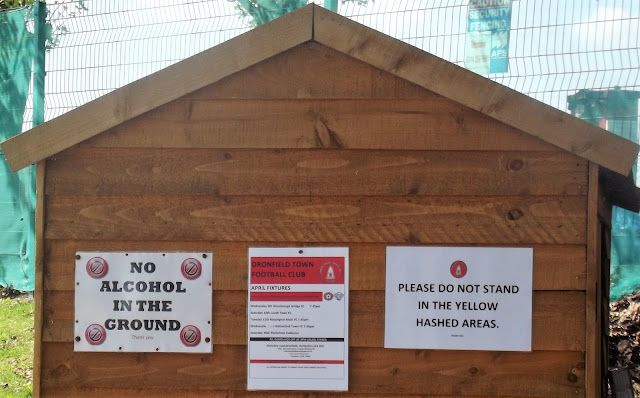 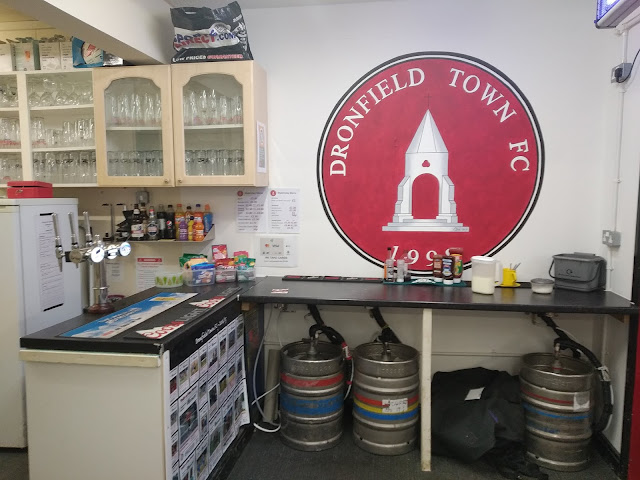 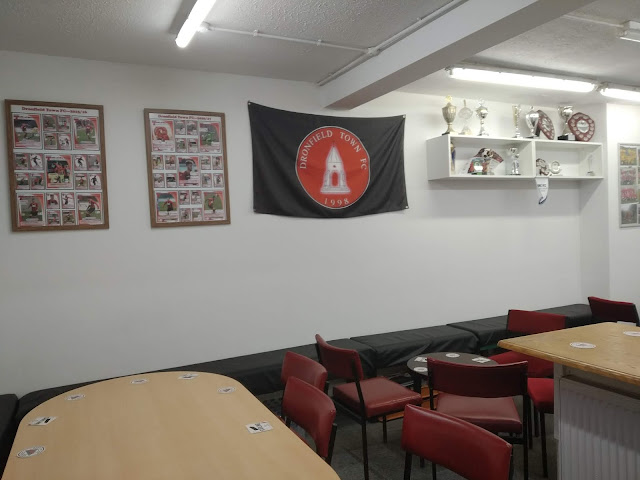 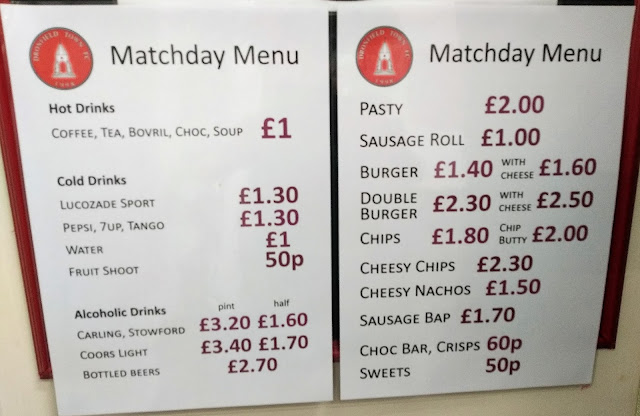 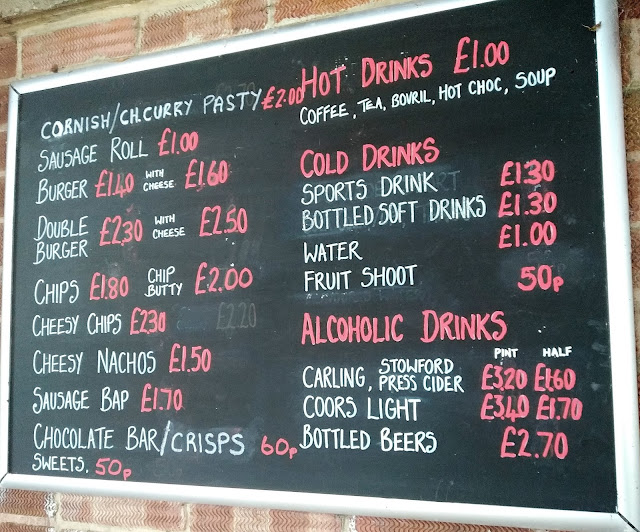 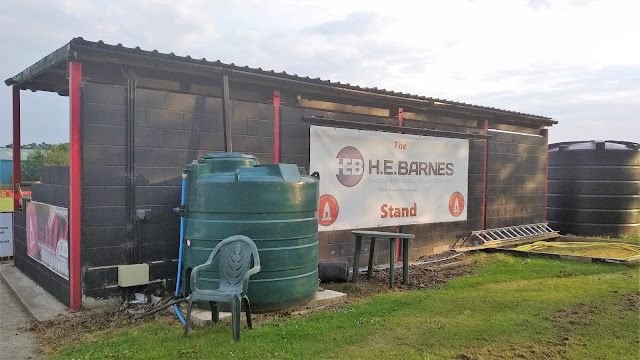 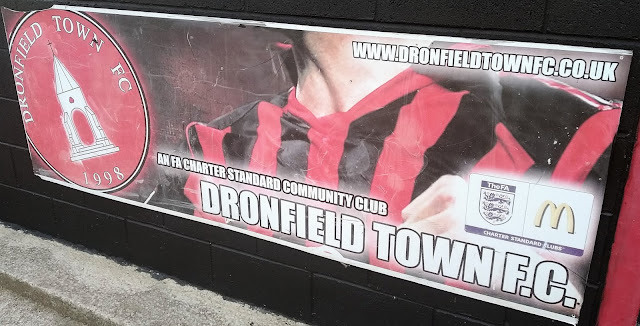 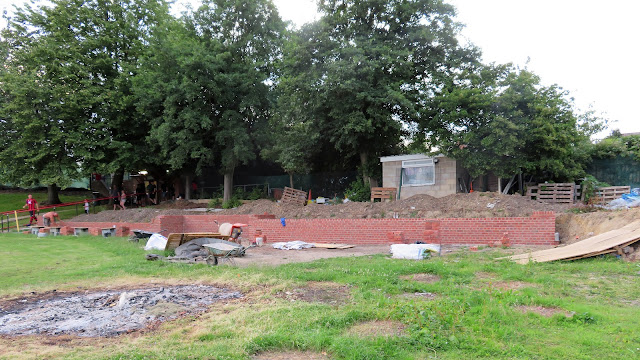 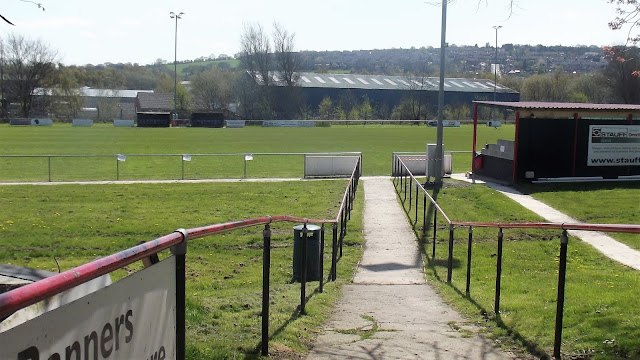 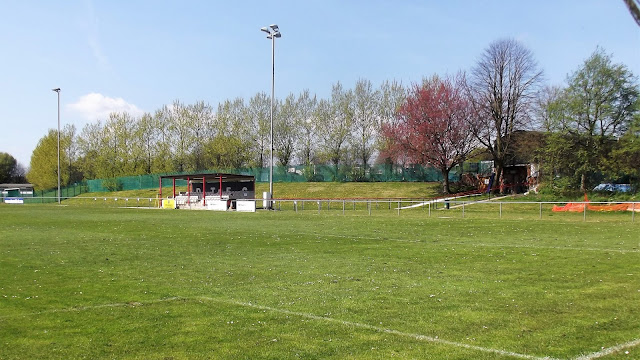 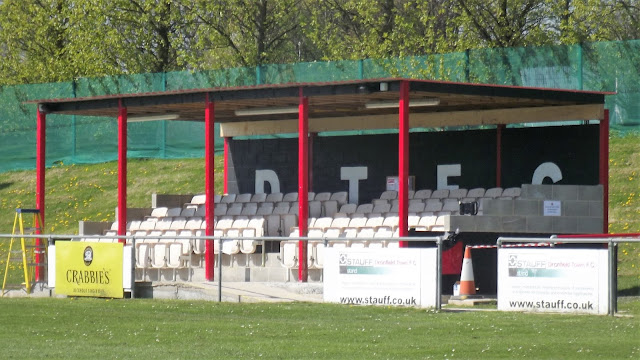 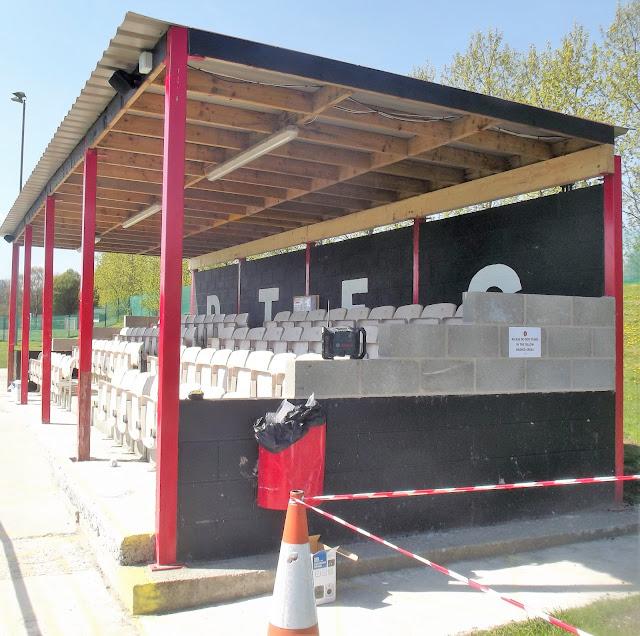 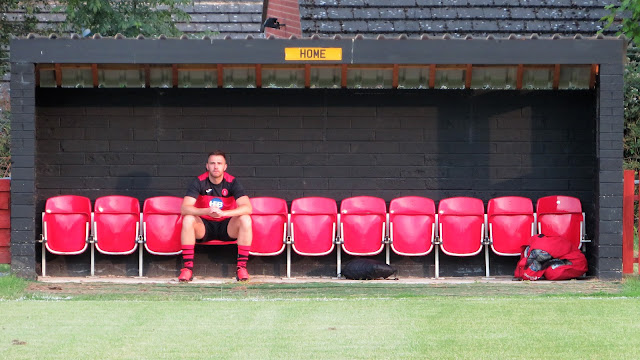 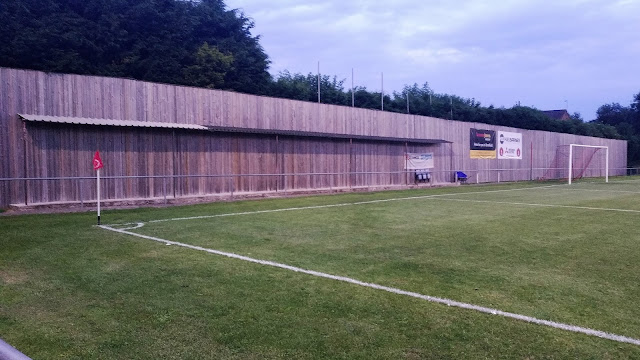 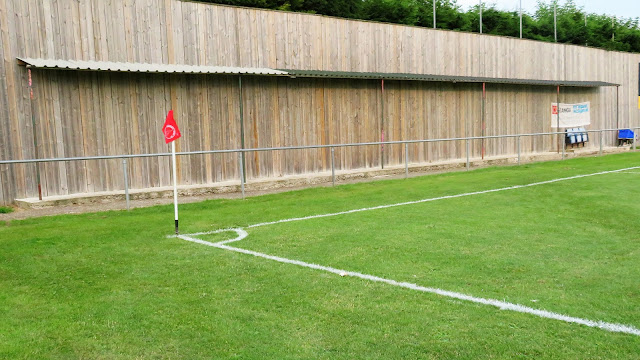 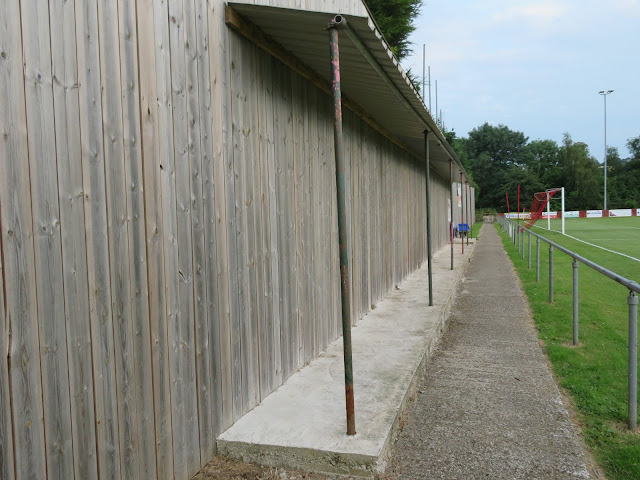 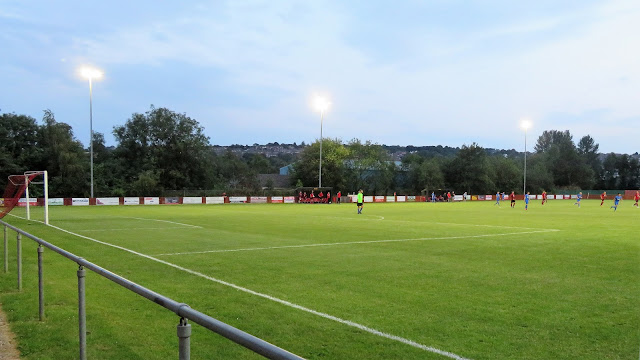 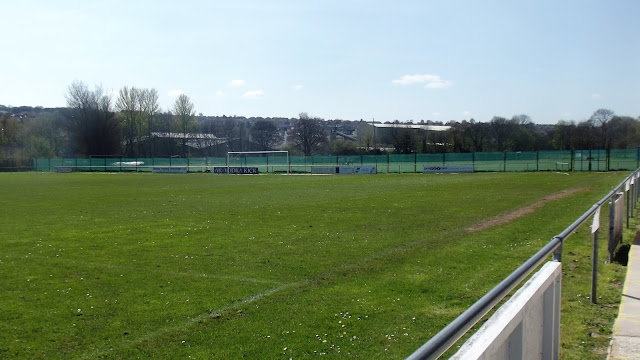