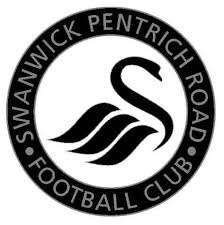 The club was founded in 1964 by local residents looking to form a football team for the area and spent its early days in the Matlock League and Derby Combination. Their first spell in the Central Midlands League lasted from 1983 until 1991 with the club generally struggling in the Premier Division, the highest finish they achieved was 12th in 1985. Three of those seasons were spent in Division 1, with Swanwick finishing as runners-up to Brailsford in 1989. The club left the league for the Midlands Regional Alliance in 1991 and went through some tough times. Things got better with them being crowned MRA Division 1 champions in 2010. A return to the now regionalised Central Midlands League followed in 2013 with Swanwick joining the South Division. A best ever 5th place finish was enjoyed in 2016/17 and then matched again last season. They've never entered either of the FA Competitions but were Derbyshire Cup finalists in 2013. Famous former players include Kevin Pilkington who played for Manchester United before a decent career in the Football League. The village of Swanwick is near Alfreton in Derbyshire and has a population of just over 5,000. The name of the place is derived from two old English words - 'swana' - meaning herdsmen and 'wic' meaning a group of buildings. 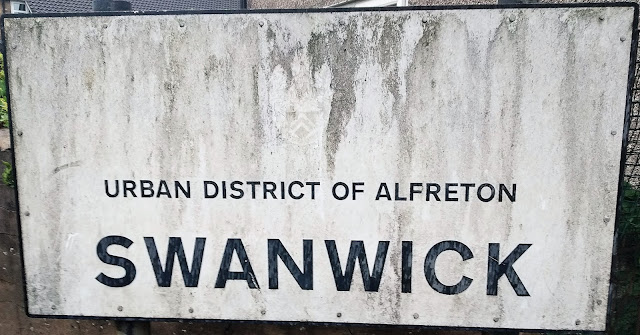 For the second game of my 5 days off work, there were a number of options available. I was with Milton Keynes based Chris again and so we both agreed on a trip to Swanwick Pentrich Road v Ripley Town. Our efforts to visit here had already been thwarted twice - firstly in May 2016 when bad traffic forced us into an eventually enjoyable diversion to Pinxton. The second occasion wasn't one to savour - two years later my car broke down before I'd even reached Chris which resulted in two and a half hours wait for Green Flag in sweltering heat and an eventual £620 repair bill. This occasion had the bonus of being an early kick-off due to lack of lights and we already knew there was plenty near the ground for pre-match I'd gone to Dronfield the previous night with Chris, not getting back until 1 and then staying up for another 3 hours. I woke at 9 on the day of the game and after having breakfast took my Aunt's dog who we are looking after for a walk. I then dropped him home and walked down town, picking up a few things that I needed. After getting back, I wasn't really hungry for lunch, so just had some soup. 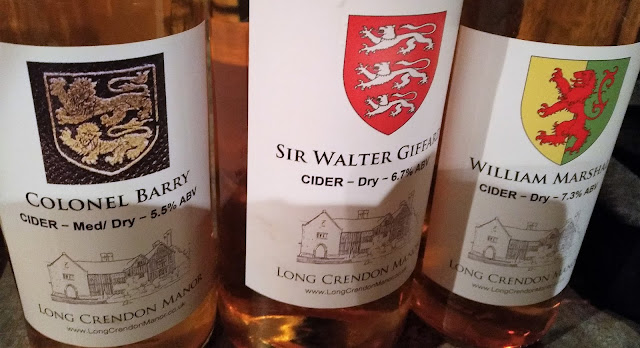 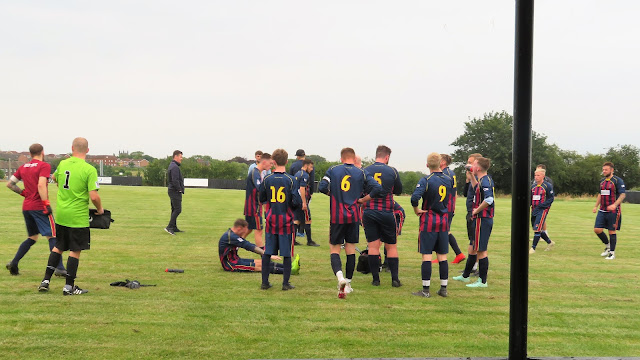 I left home at 1.45 as I wanted to stop at a local farm shop in Long Crendon to pick up some of their real cider. I got there at 2.30 after a trip down several tiny roads. After picking up three bottles from their range as well as a very nice chocolate brownie, I left at 2.45. It took me until 3.40 to reach Chris, again a lot of small roads were involved. We were soon on our way, there was the usual slow start to the M1, thanks to the long-running roadworks slowing everything down. The motorway was generally well behaved, a few slow spots but it wasn’t until we got to our turn off that we hit a major delay. There we had around 15 minutes delay, but we were still parked up in Swanwick at 5.50, choosing a spot on the main road outside the ground. We ordered a Singapore Vermicelli each and ventured to the local pub. The Steampacket promised three real ciders on the Whatpub website, but only had Strongbow, so I had to settle for that. Chris paid for his share of the petrol - all in pound coins, just after I'd managed to get rid of the load that he gave me yesterday. The drinks selection may have disappointed, but it was a nice local. We picked up our dinner and headed to the ground, paying £2 entry. We then sat in the stand for our meal, which was pretty decent, but not exceptional. It had started to rain and I was glad there was plenty of cover at the ground. 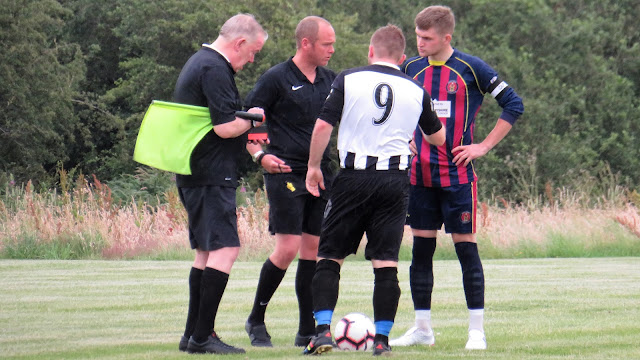 The game was not the best. Visitors Ripley didn't put up much of an attacking performance, but to be fair, they dug in and didn't rollover. It took until 15 minutes in for Swanwick to take the lead, Dean Owen heading home a cross from 5 yards out. Typically for a pre-season friendly, the pace was slow but after 34 minutes, the hosts doubled their lead, this time a good run and shot from the edge of the area by Shane Buckerfield. Around 7 minutes into the second half, Swanwick had the chance to make it 3-0 from the penalty spot, but the number 9 screwed the ball wide. A couple of minutes later amends were made with Josh Smith bundling home from close range. Just after the hour mark, it was 4-0, a lovely shot on the turn by Guy Wilding from just inside the area. The game had been pretty physical up to this point, and Ripley were letting the frustration get the better of them. As it was a friendly, the referee asked their management to sub a player who had made one bad tackle too many. The raft of substitutions actually did the game some good and Ripley started to have some chances. Around 10 minutes from time, their number 17 got away down the right and hit a shot that struck the outside of the post. On 82 minutes, Swanwick made it 5-0, a trialist heading home a cross from around 10 yards out. There was one final chance for the visitors to get on the scoresheet after the Swanwick keeper made a great double save, but the third bite at the cherry was blasted over. There had been heavy rain during the game, but happily, this was reduced to just a drizzle as we walked the 5 minutes to the car. It should have been a simple journey home, but the fannying about with the overnight works had started early. Even so, Chris was dropped off by 10:20 and I was back home less than an hour later, enjoying my final few minutes as a 39-year-old before my birthday made me feel a right old git.


A missed penalty from Swanwick Pentrich Road tonight. But they didn't let it bother them, beating Ripley Town 5-0
A post shared by Russell Cox (@russ_wwfc) on Jul 17, 2019 at 5:52pm PDT

HIGHFIELD ROAD is a great venue for a step 7 club. There is plenty of cover - two stands along the side and one behind the goal with probably enough space for 150 standing and around 15 seats. Only two sides are officially open to the public. Facilities at the ground are limited, basic snacks and drinks in cans. Further afield is a Chinese and a chippy, as well as a few pubs and convenience stores. Overall, well worth a visit to this friendly club and a pleasant venue. 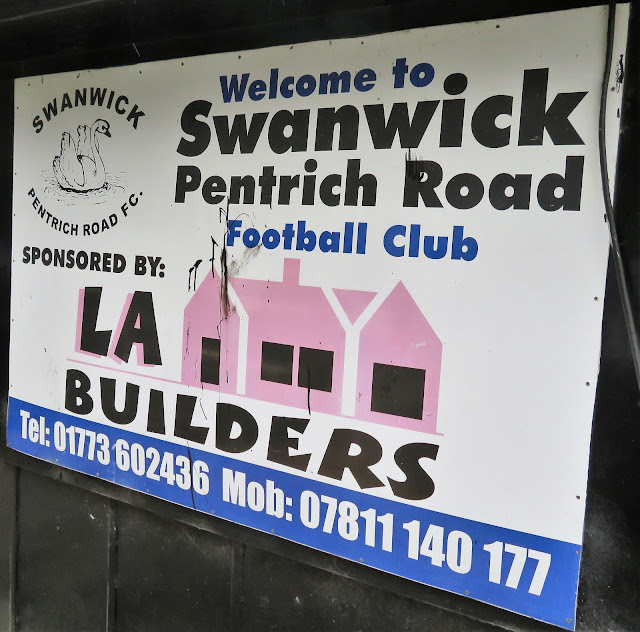 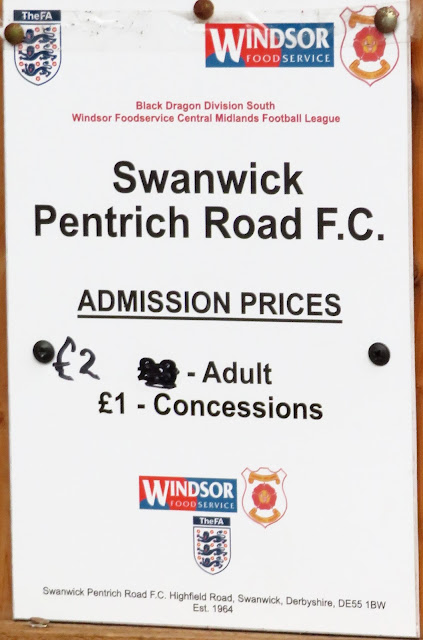 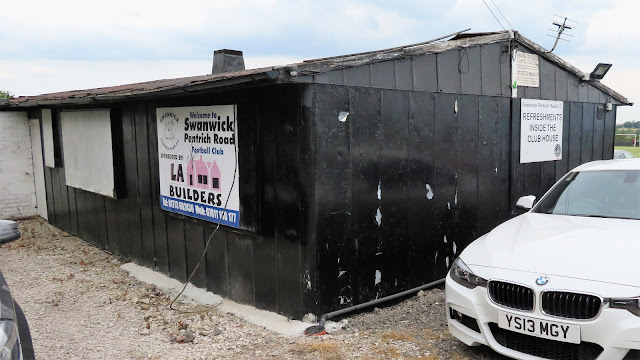 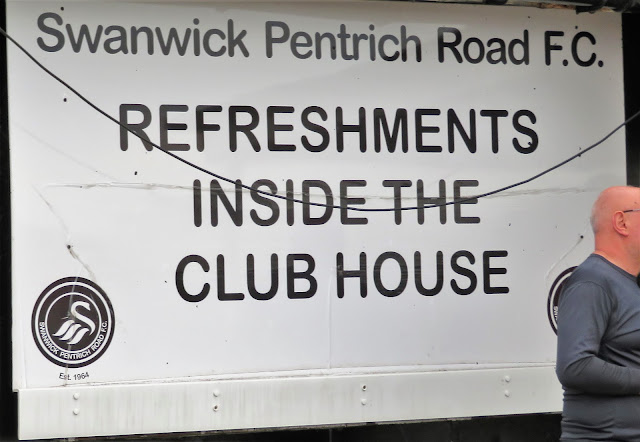 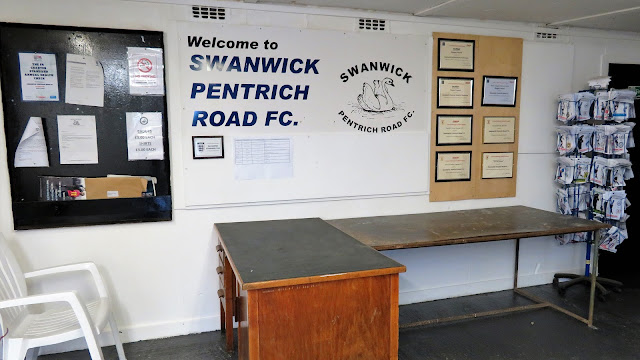 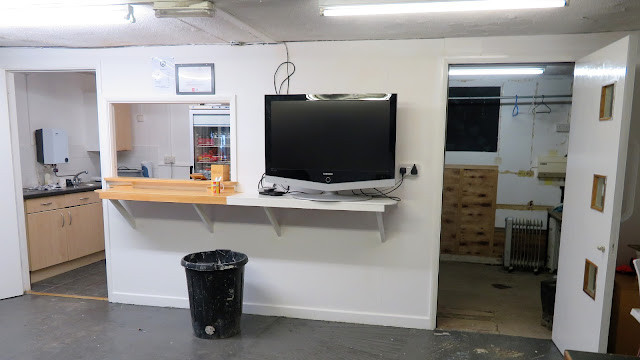 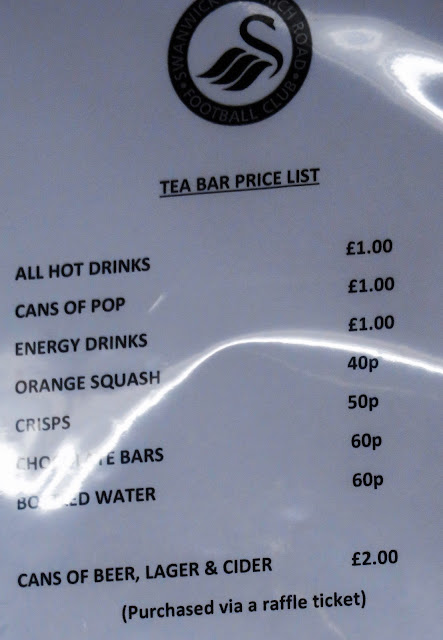 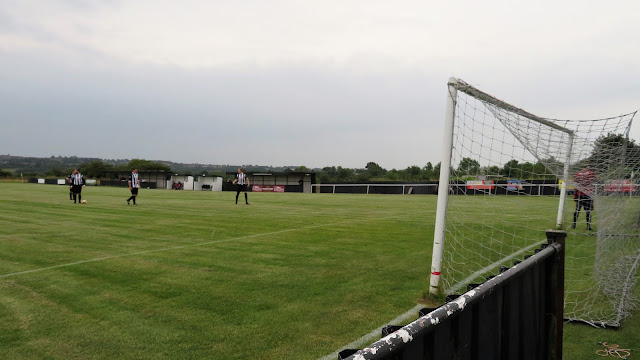 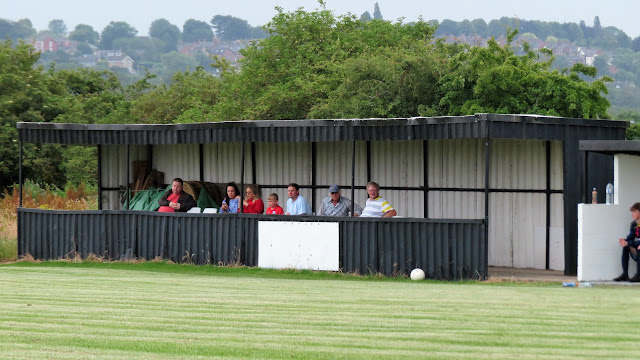 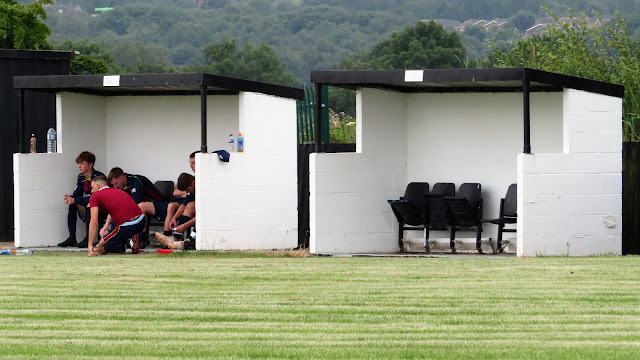 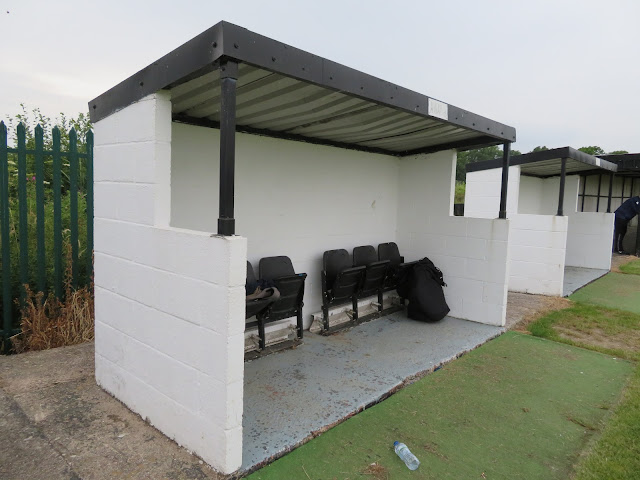 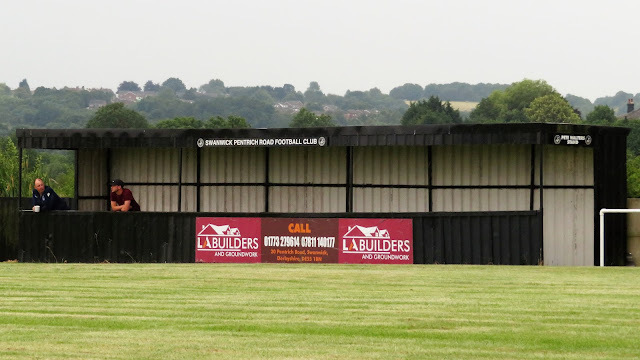 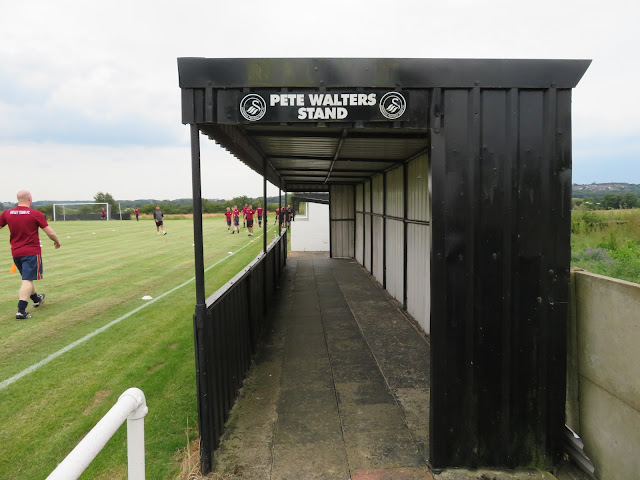 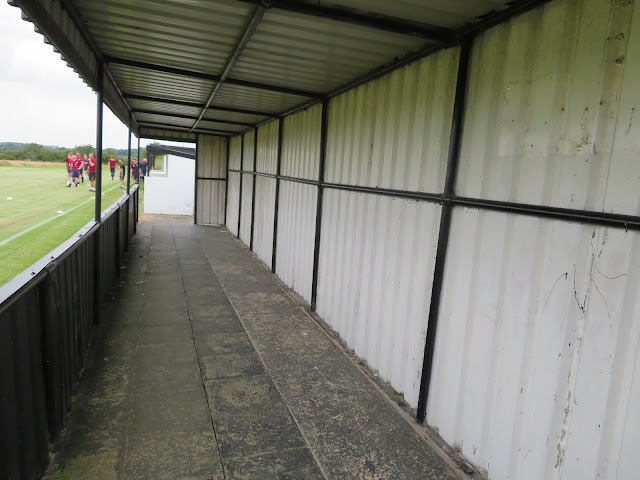 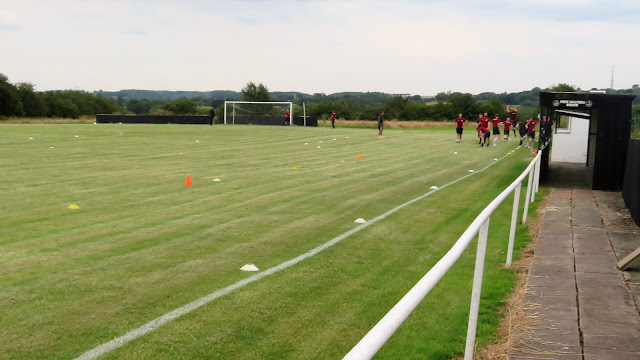 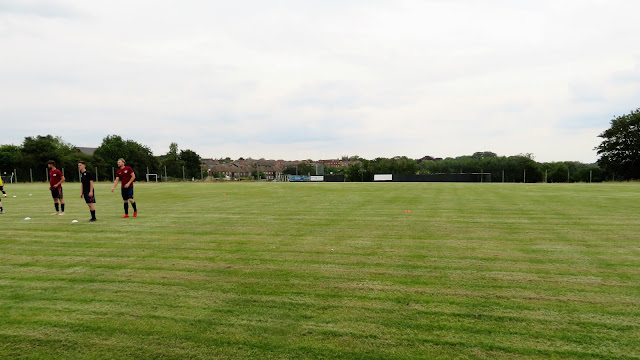 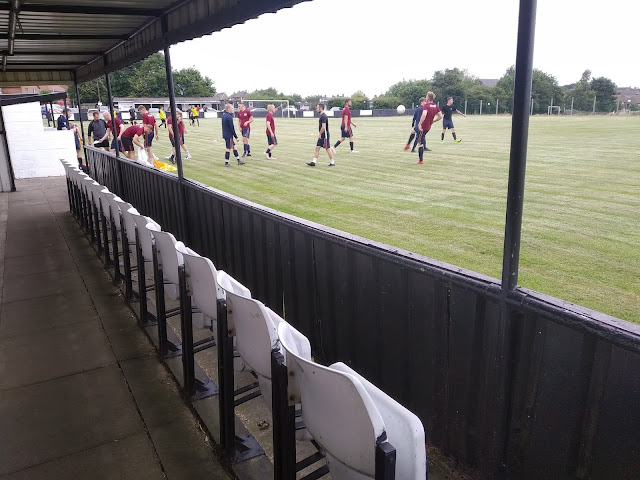 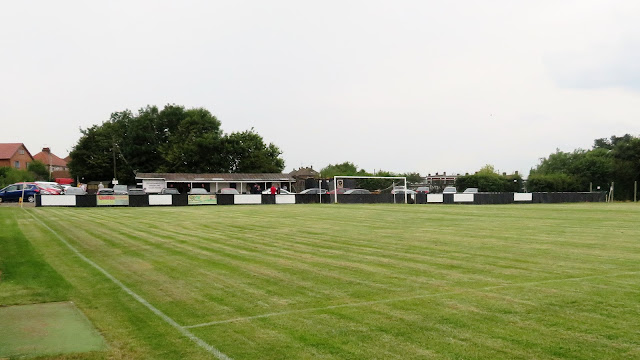 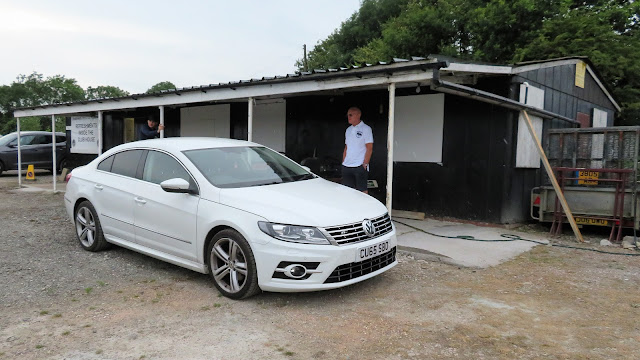