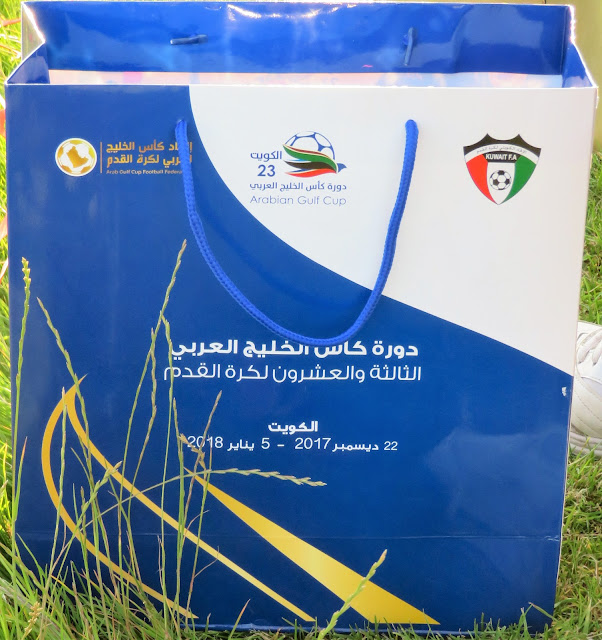 Bisham Abbey was first opened in 1260, or at least the grade I Manor House was. It took its name from the long-gone monastery which once stood on the site. It's been home to various members of the Royal Family over the years including King Edward II. These days, it's used for conferences and team events but is better known for its sporting uses. Hockey, Tennis, Squash and Golf are played on the site, but it is known mainly for its football use. Various teams have trained there, most notably the England National Team. It's often used for training prior to Wembley Finals and was used by Wycombe Wanderers in the second half of the 1990s, in between them training at Holmer Green and building their own training ground in 2001, thanks to the proceeds from a run to the FA Cup Semi-Final.

I've seen Marlow a number of times but the Kuwait national team were a new one on me. Before I'd even got into football, I remember seeing the country on TV as a primary school kid, as they were involved in the Gulf War with Iraq. Nowadays their economy is based mainly on petroleum, with the country having 10% of the world's oil reserves. Football is the most popular sport in Kuwait - big teams include Kuwait SC, Qadsia SC & Al Abarbi and this is where the majority of the national side plies its trade. They are currently ranked 156th in the FIFA rankings  - below European minnows Andorra but above Moldova. They are ten-times Arabian Gulf Cup winners and the 1980 Asian Cup champions. The early 1980s were their most successful era but were 24th in the FIFA World Rankings as recently as October 1998. They are most well known for their participation in the 1982 World Cup Finals in Spain where they earned a 1-1 draw against Czechoslovakia in Valladolid and restricted England to a single goal victory in Bilbao.  Their most infamous moment came in the 4-1 defeat against France, with the French having already had four goals disallowed. Alain Giresse thought he had scored France's 4th with his side already 3-1 up but the Soviet Union referee Myroslav Stupar disallowed the goal following vigorous protests by Sheik Fahid (the Kuwaiti FA President) who took the team off of the pitch. The players claimed that they heard a whistle and to be fair, one clearly can be heard from the crowd. As a result, the Sheikh was fined £8,000 and the referee was banned from officiating. The incident was recreated in the mid 90's comedy football show 'Fantasy Football League' in their 'Phoenix From The Flames' segment.

The good thing about pre-season is that the occasional random interesting game comes up. There had never been one as diverse as the Kuwait national side, not that I had seen anyway. The team were over at Bisham Abbey, training in England ahead of some upcoming World Cup qualifiers. They'd fallen from grace in recent years and whilst they were over here, they also had friendlies arranged against Maidenhead United & Hungerford Town, both at their own grounds. I felt that Marlow had undersold themselves, playing the game at Bisham Abbey and not charging an entrance fee for such an interesting game. In fact, aside from retweets, there was nothing on the club Twitter since the end of May (though that changed the day before the game). It looked to be a missed opportunity for a club that had finished as high as 3rd at step 2 of the Non-League pyramid in 1994 and had played in the FA Cup more times than any other club. 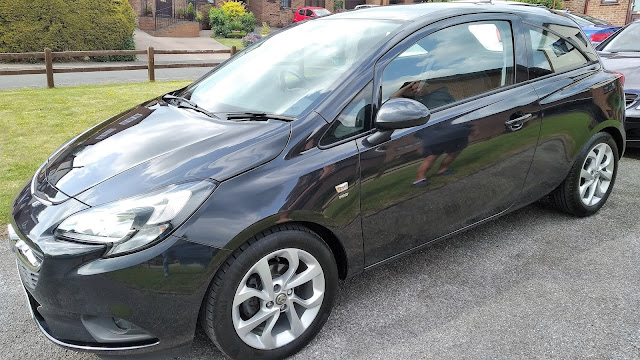 In between this game and my last one, I'd finally managed to get hold of a 'new' car after looking for one for a few months. The final straw for my shoddily-built Renault Megane was when the bumper split on the way back from Badshot Lea on Saturday. Whereas I'd spent the past few months looking for the right deal, time was very much of the essence. Car Giant on Sunday bought about a wasted journey as I'd forgotten one of the keys and I got a disappointing part exchange figure. A local garage bought more joy on Monday. though the car was £800 pricier, I got a better part exchange value by £200 and almost a year's MOT. It was always going to be a Vauxhall Corsa due to the sheer number of them keeping the prices down. It was my usual day working on the day of the game before I came home and checked the FA Cup draw. I was initially pleased when Bexhill United were drawn at home, but then disappointed when I found that their ground wouldn't be used due to cricket being played at the venue. Whilst checking the Marlow FC Twitter in the afternoon, which had finally been updated, I noticed that the game had been put back to 6:30, allowing me more time at home. I left home at 5.35 and was surprised at how easy the journey was. I was at Bisham Abbey half an hour later and after a wander around, I took my place pitchside with some other fans. These included Joseph (AKA 'Groundhopping FC) and his dad. 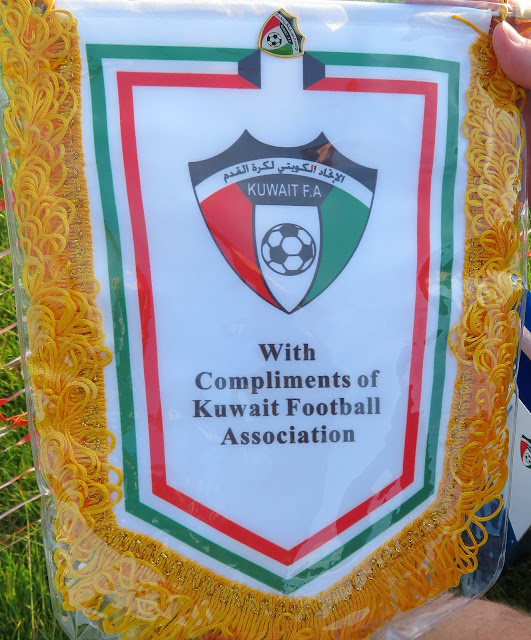 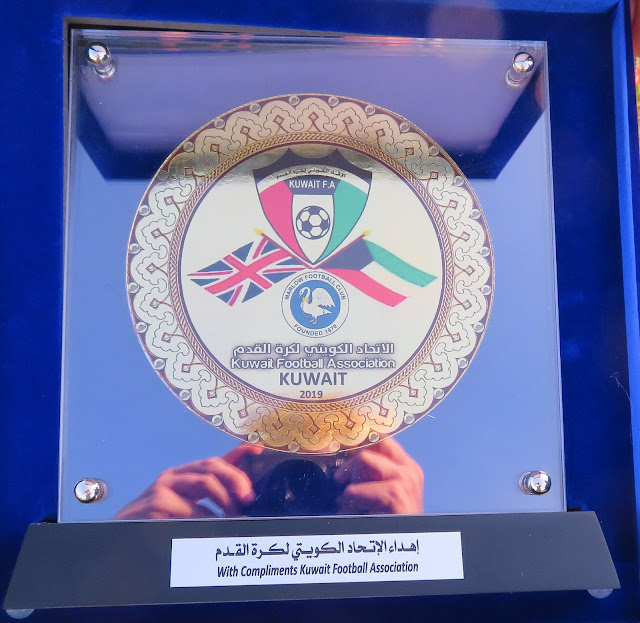 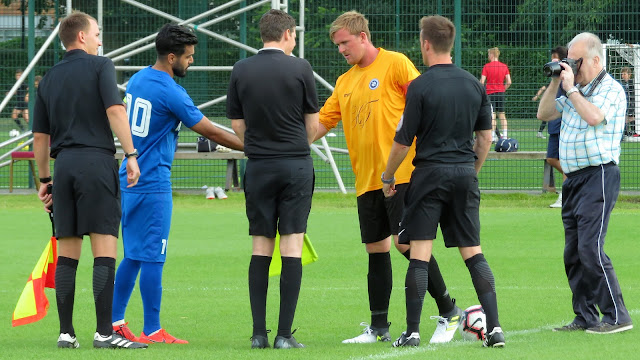 Marlow started in their gold away kit, whilst Kuwait started in their blue home kit. The national side made a strong start and they were ahead after 4 minutes when a good through ball found a striker who finished neatly from 6 yards. The Kuwaitis were well on top and they hit the outside of the post on 15 minutes. Marlow were second best, mainly through lack of fitness, though their right wing-back, playing number 2 looked very useful. Kuwait made it 2-0 on 31 minutes through a goalmouth scramble and it looked a potential own goal. They looked to be running away with it and made it 3-0 on 38 minutes with the goal of the game. A square ball across the edge of the area found a player who shot into the bottom left-hand corner from the edge of the area. Marlow were handed a lifeline on the stroke of the halftime when they grabbed a goal on the break, a powerful shot from outside the area. They Kuwait side was completely changed at half time and this lead to the second half losing its pace. The game was a lot more physical, but it was Marlow who reduced the arrears on 67 minutes. 'Curt' was tripped on the edge of the area and the resulting penalty was successfully converted. It had been the best game I'd seen this season and good entertainment for the 56 in attendance. The visiting national side did themselves proud and brought some lovely gifts for Marlow. My only regret was not getting the lineups and scorers. After the game, I gave Joseph and his Dad a lift to Marlow station and after stropping at Waitrose on the way home, got in at 9.15. I spent the rest of the evening typing this blog whilst enjoying a few drinks and watching TV. 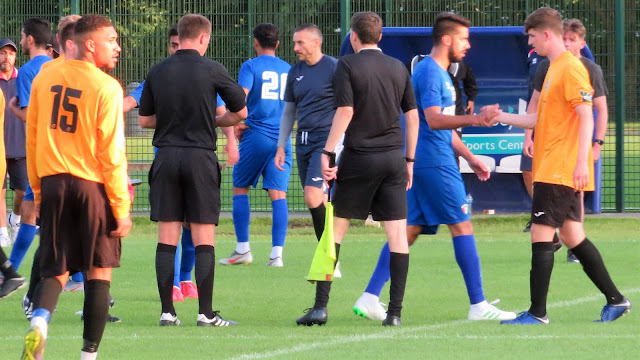 
Bisham Abbey is part of a huge sports complex, so all facilities are exceptionally kept. The pitch that I watched from had fences behind each goal, closed off on the far side and open on the near side, save for a small bit of soft fencing. It's all open standing, save for a small bench. Facilities in the main building include a hotel, bar and cafe, whilst there are other pubs nearby. The town of Marlow is around 1.5 miles away and includes a train station. 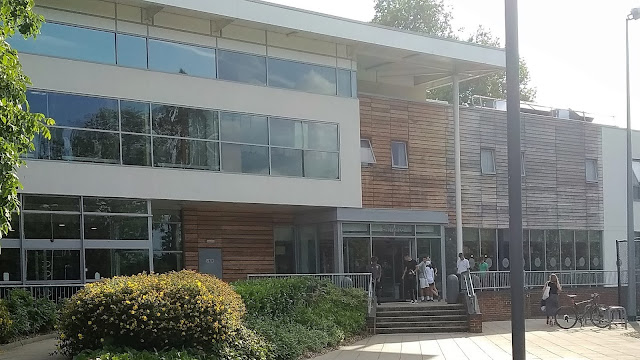 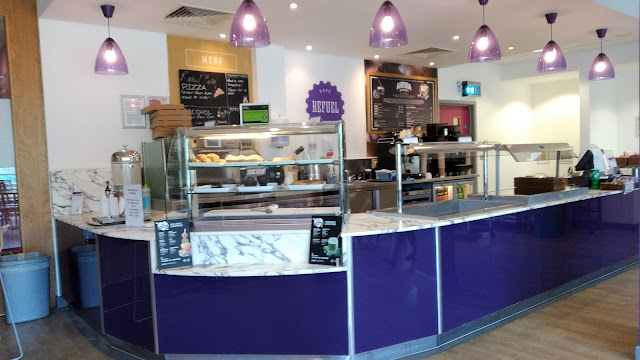 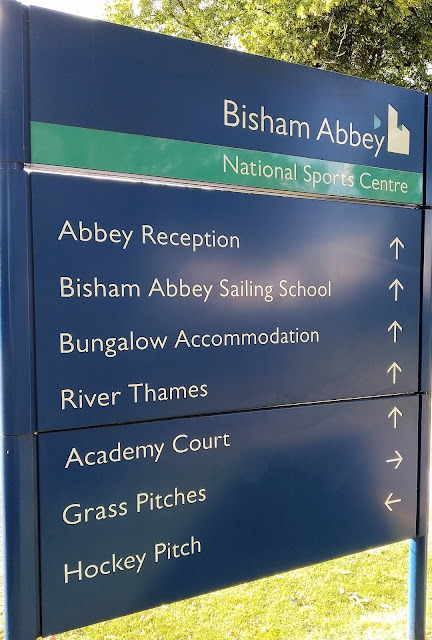 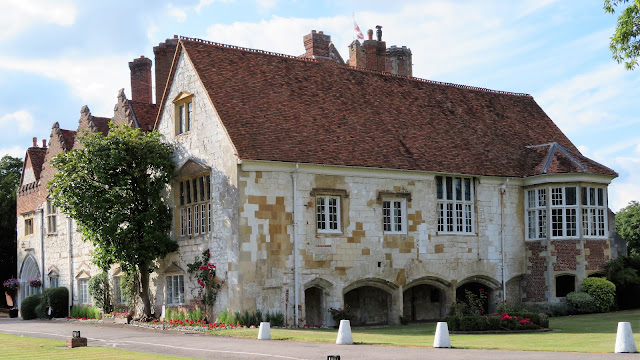 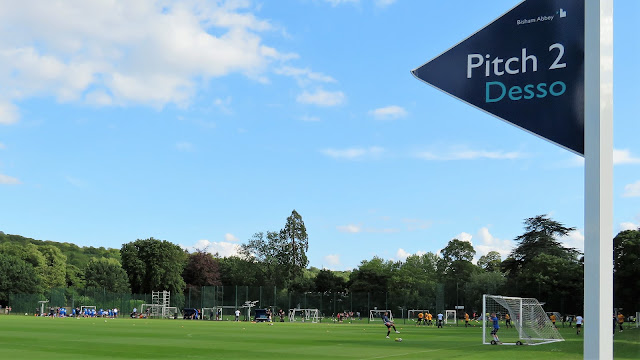 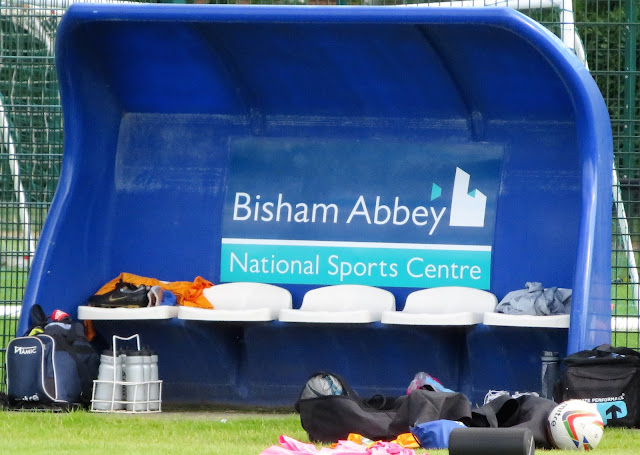 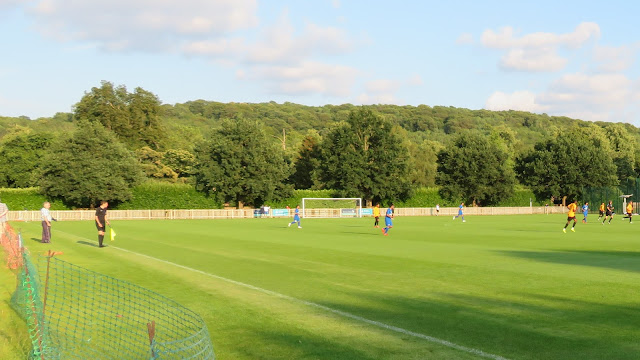 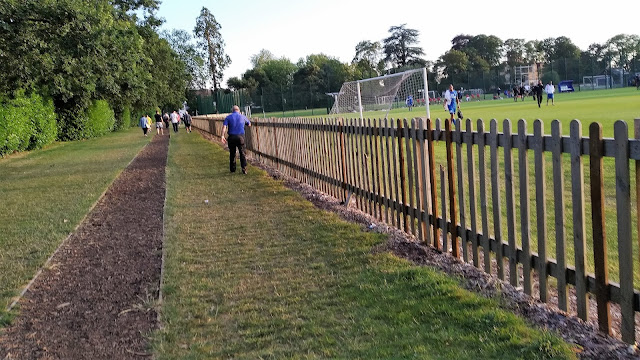 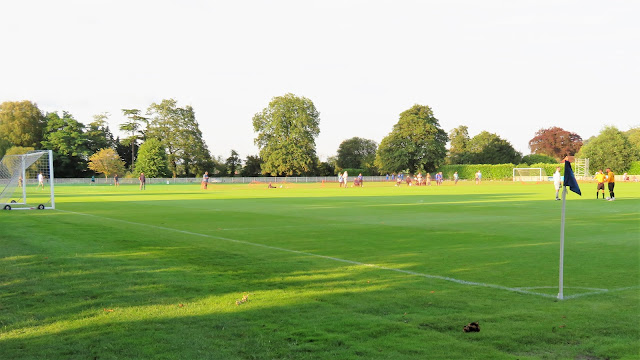 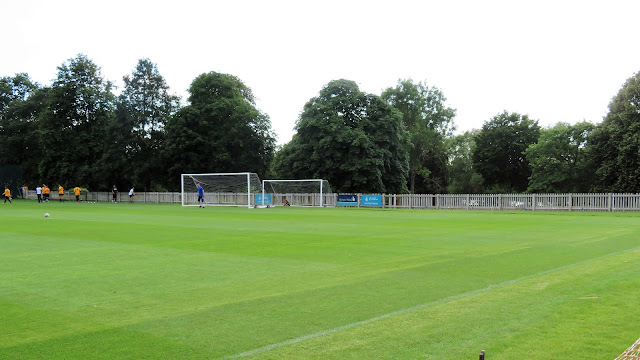 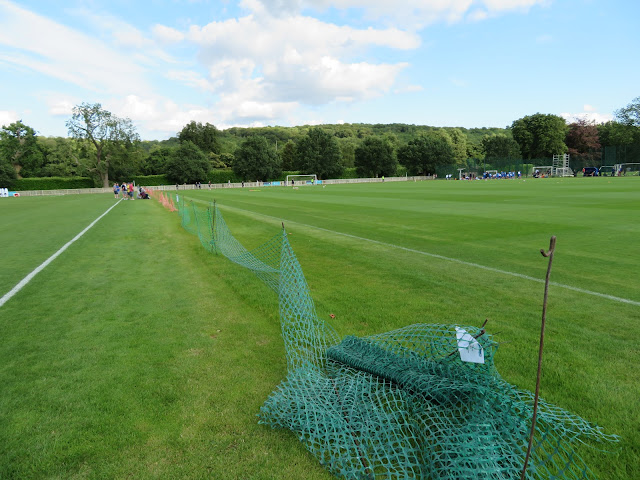