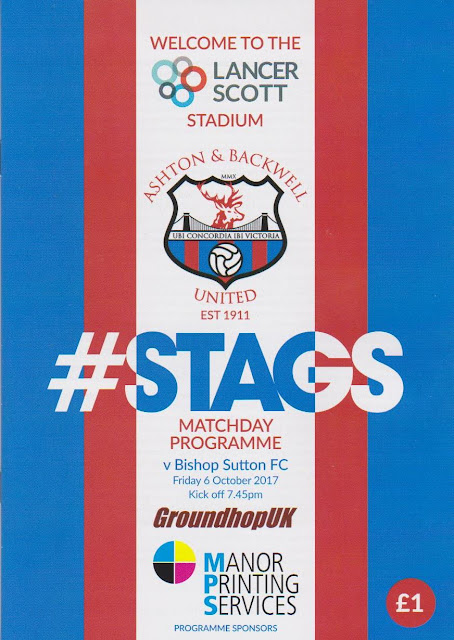 The club was formed in 1911 and were originally known as Backwell United. They stayed in local football for the first 70 or so years of their history, winning the Somerset County League five times in six seasons between 1978 and 1983. After their final triumph, they took a promotion to the Western League, starting in Division 1. They adapted to life at the higher level well and finished as runners-up to Ottery St Mary in 1990. Unable to take promotion due to lack of floodlights, they would remain in Division 1 until 1995 when third place behind Brislington and Glastonbury was good enough for promotion.They'd enjoy their best ever finish of 4th in 2003 and 2004 before a severe downturn in fortunes saw them suffer relegations in 2006 and 2008. Having dropped back down to the Somerset League, they merged with another local team, Ashton Boys in 2010 and after two 3rd placed finishes, rejoined the Western in 2013. They've gradually improved and last season finished 7th, their best placing since returning.

In the FA Cup, their best ever run came in the 1999/2000 season. That year they beat Andover, Bashley and Barnstaple Town before losing to Oxford City in the 3rd Qualifying Round.In the FA Vase, 2004/05 saw by far their best run as they beat Chard Town, Corsham Town, Wimborne Town, Slimbridge and Lowestoft Town before a narrow 2-1 defeat to Stourbridge. Local cup wins include the Somerset County League Cup in 1983. Their record attendance of 1000 came for a 2013 friendly game against Bristol City. 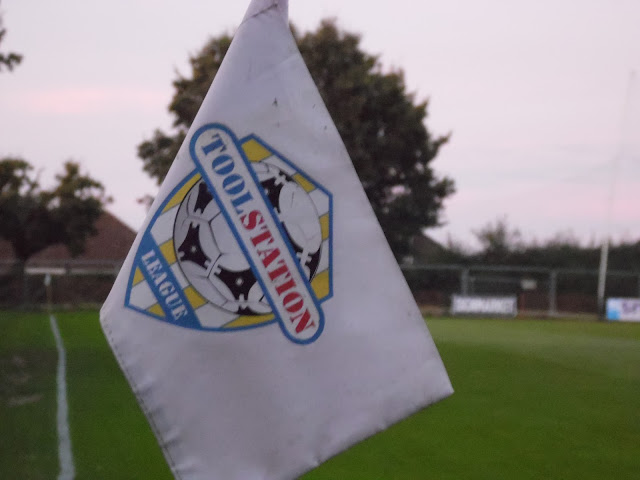 I'd been looking forward to this Western Hop since it was booked in early September. This time, I'd opted to use Groundhop UK's offer of ferrying me around the games via coach. It would cost me a bit more, possibly two to three times that petrol would cost but it was worth it for the chance to catch up online and write my blog in between games. I was fed up of driving and then not having enough time to enjoy the game beforehand, and also the backlog of blogs when I got home was annoying. I'd even been hoping for the potential of a minibus coming from Oxfordshire to save me even more driving but there was not sufficient interest to make it viable. I'd booked my hotel well in advance too, but there was even late drama with that. Despite booking a month in advance and the booking being 'all guaranteed and paid for' they phoned the afternoon before to tell me that they were 'closed for refurbishment'. A half-hour telephone call to the firm that I booked with, Hotels.com later and I had it sorted. They phoned the hotel who used another excuse of 'flooding'. To Hotels.com credit, they sorted me out with better accommodation and paid £20 out of the £25 extra costs despite it not being there fault. Of course, I gave the hopeless hotel that let me down a bad review on TripAdvisor, so if you are staying in Weston Super-Mare, avoid Dauncey's Hotel like the plague. There was a positive out of the situation though, I was staying in one of the pubs that I'd wanted to visit originally, due to it doing good cider, rather than the other end of town. 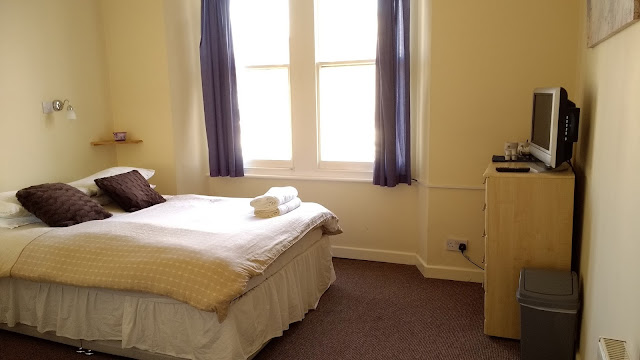 The previous night, I'd been split between going to an FA Youth Cup game at Clanfield 85 or staying in and watching the England game. I chose the latter and regretted it, as usual, it was dull as dishwater and England were lucky to beat Slovenia 1-0. I was more happy for Scotland beating Slovakia to be honest and was hoping for a decent phone in to listen to. Sadly, the only choice was Andy Goldstein on TalkSPORT, so I just went to sleep around 10 pm. I woke at 7.30 the next morning and after having a burger for breakfast, I watched a few YouTube videos. After having a bath, getting my things together and watching a bit of TV, I left at 10.25. The plan was to stop in Bristol, park at ASDA and walk to the Bristol Cider Shop to get some bottles to take away. It was a decent journey down until I hit Bristol, but then the last mile took 15 minutes, bringing back bad memories of a couple of years ago when it took me 2 hours to get through Bristol in rush hour. Luckily, once I got out of the car, things got better with free parking ten minutes from the shop and me stocking up with 6 great bottles of cider. I got back to my car and drove the remainder of the journey to Weston Super Mare. After checking in, I spent an hour in my room, heading out just after 3. I went for a pint of Thatchers Traditional in the hotel bar, one that I've had before, but very nice. I then walked towards our coach meeting point, at the hoppers base. Before that though, I went in the Cabot Court Hotel, one of the Wetherspoons in Weston Super Mare. I got a great deal on the Doombar pie which came with mushy peas and chips and was very nice. I also sampled a new cider, Thatchers Cider Bar Spartan, which was decent enough. I got to our meeting point with 25 minutes to spare and it was good catching up with other hoppers in the plush hotel bar. 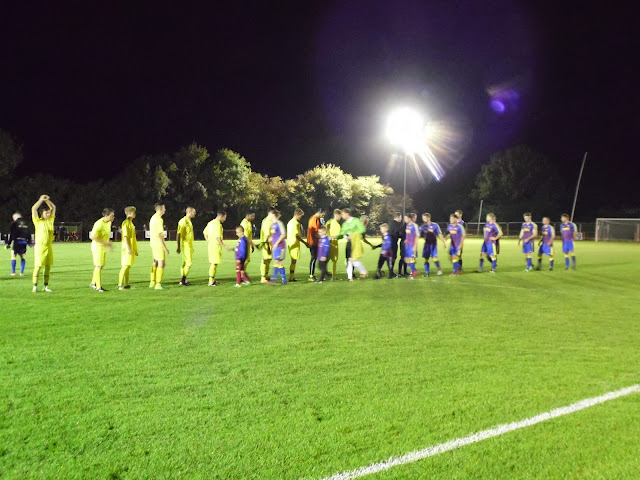 We all got one of two minibuses at 5, with Laurence driving the one I was on. He was on great form as usual, reeling off some great anecdotes as we made our way to our first game. We got to the ground with 2 hours to spare, so I went to a local pub, The Rising Sun. It was a worthwhile mission, I tried a new cider, Devon Orchards First Press and met a nice dog. After that I made my way back to the ground, getting there at 6.20. The collection of programmes and tickets was very efficient and once I'd got these, it was time for the bar. Yet another new cider in Thatchers Dry was sampled and I also had a go on the football scratchcard, selecting Middleborough as my team. Food wise I was well catered for, a chilli con carne and a hot dog were sampled, both with chips. The game wasn't up to much though, a brace from Tom Skidmore giving the hosts a 2-1 win. Just before half time, he gave his side the lead with a low shot, then got the winner halfway through the second half. After was a goal for Bishops Sutton, but the game was more notable for some feisty tackles than any real chances. Indeed, the hosts Sam Thomas was sent off for a second booking late on and this promoted a late flurry from the visitors with the Ashton and Blackwell keeper making a good save late on. After the game, we had a trip to Bristol to pick Laurence's girlfriend, Robyn up. After that.  I was dropped near my hotel and found my way back with ease, as I had memorised the route from the train station. I got back in good time with my phone long completely dead and so I was happy to get it on charge.  I watched some videos for a bit, before going to bed around midnight. 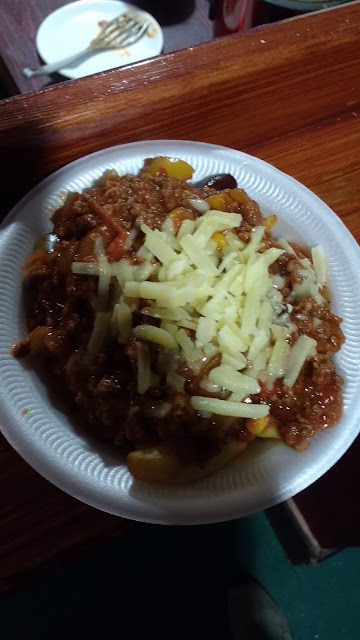 THE LANCER SCOTT STADIUM is a pretty decent ground for the level and it's good to see they have refrained from the use of metal 'arena' type stands. There are two seated areas, between them holding a couple of hundred fans. The rest of the ground is open and includes a few steps of terracing in front of the clubhouse. Talking of the clubhouse, it's pretty decent, offering the standard range of Thatchers Cider that is prevalent in this part of the world. Food was decent and a bit different to offerings elsewhere. I didn't see a club shop, though badges are available.

Near the ground, is a very good pub, The Rising Sun and this offers a good alternative to the club bar. Fancy and pricey food is available, though I didn't sample anyway. There were also some takeaways nearby, but again, I didn't check them out. 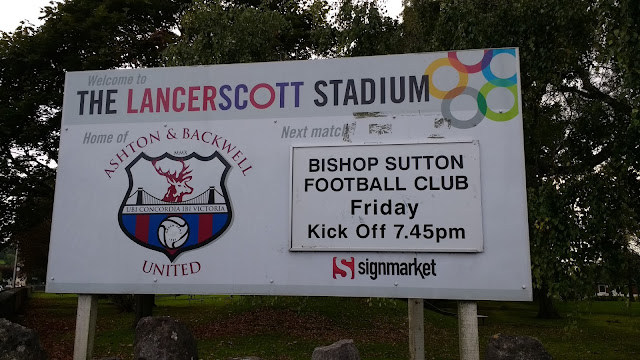 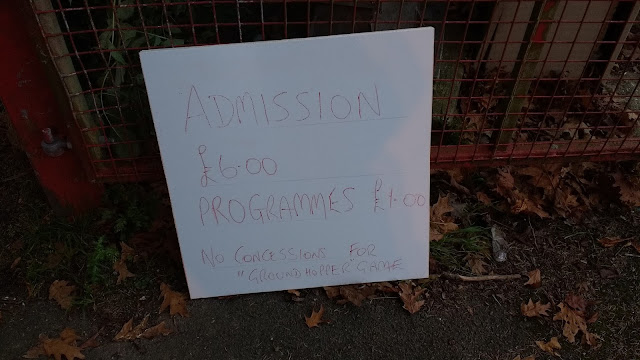 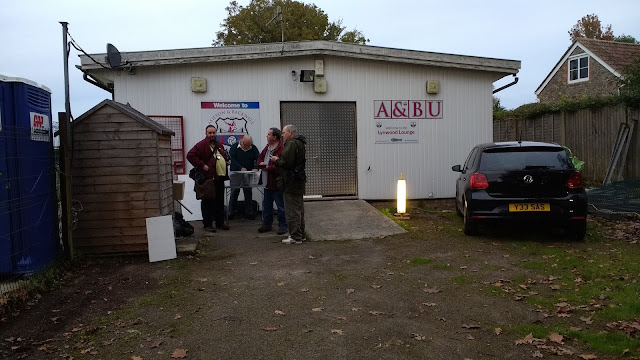 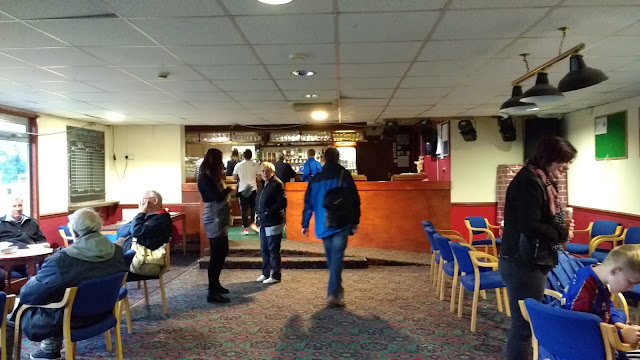 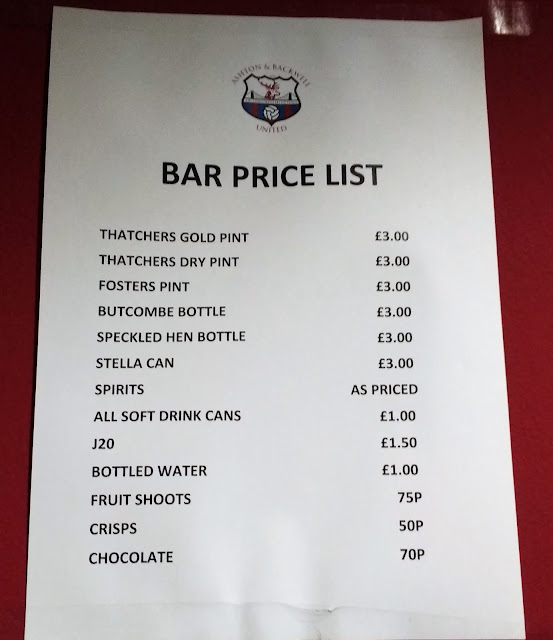 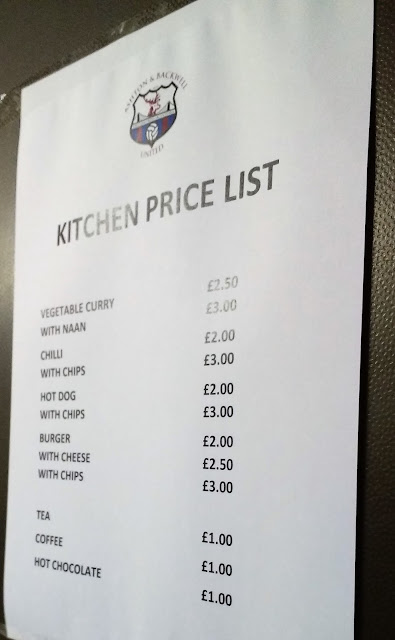 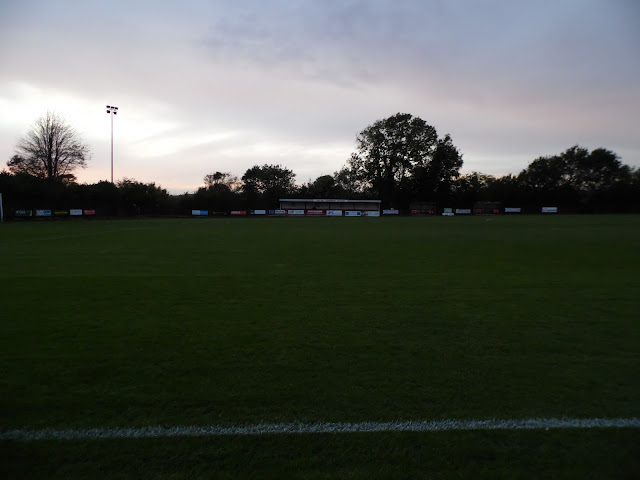 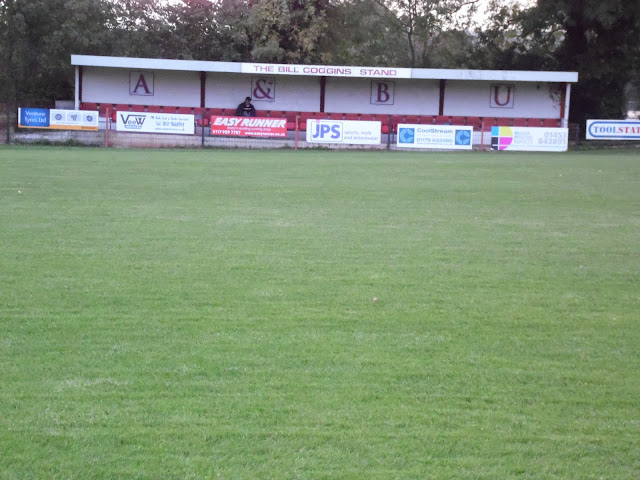 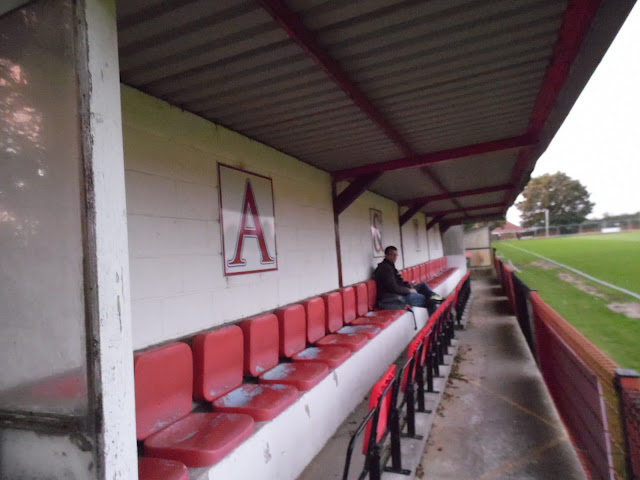 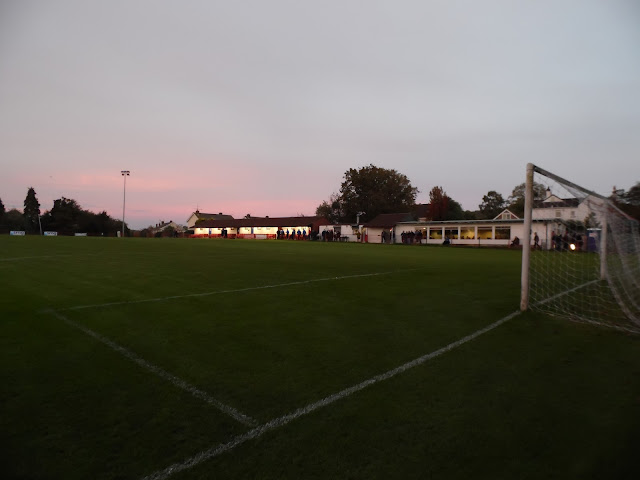 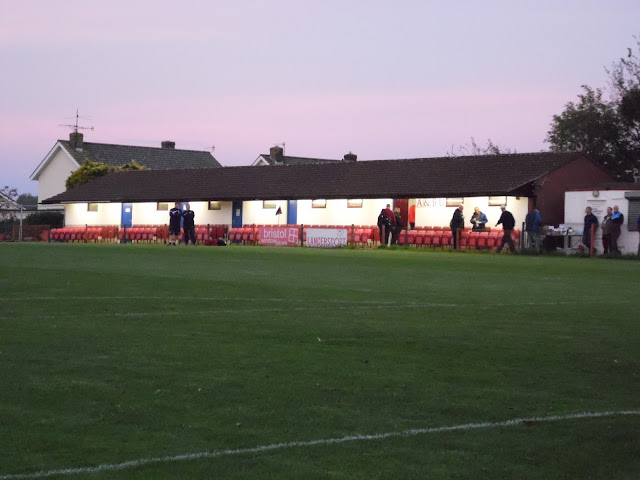 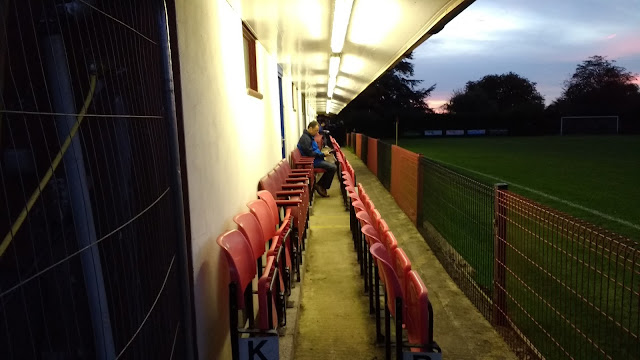 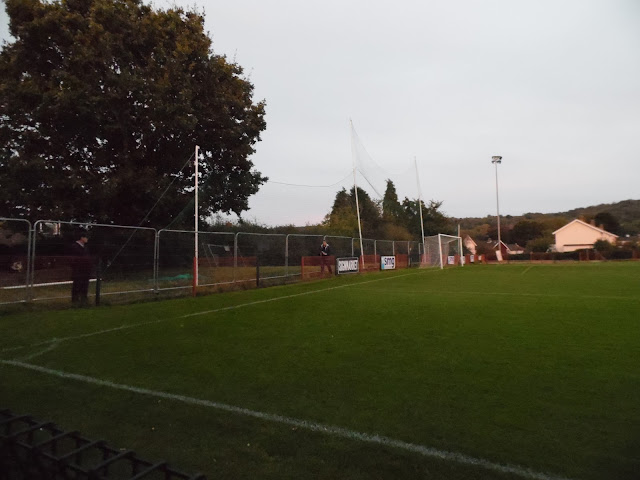 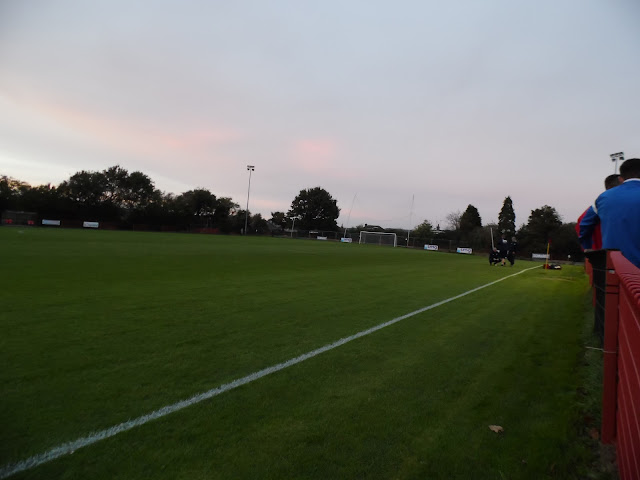 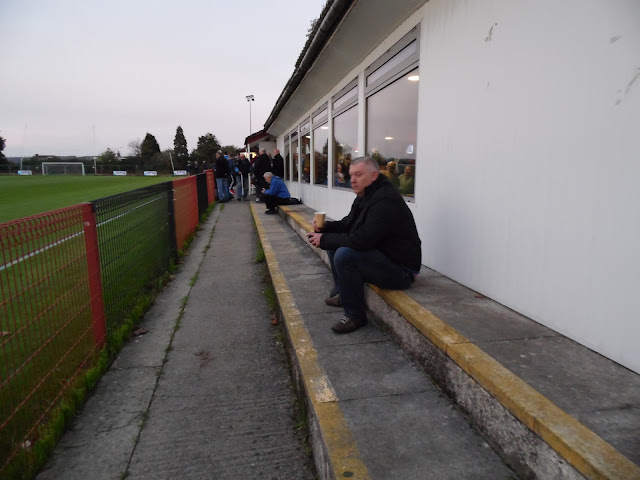 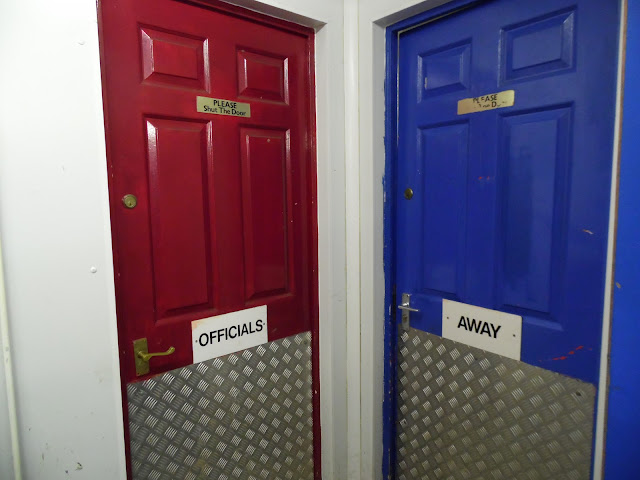