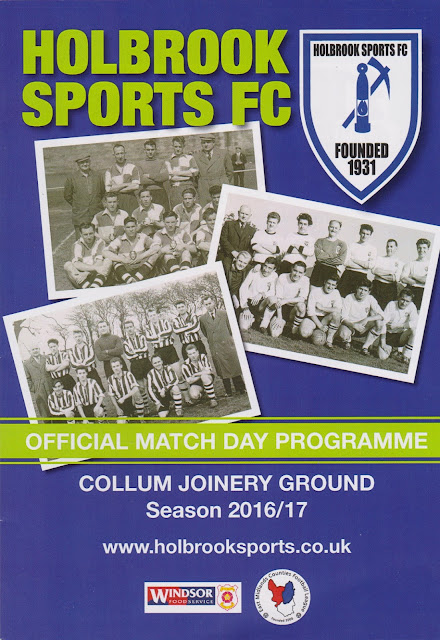 The current incarnation of the club was founded in 1996, replacing the disbanded Holbrook Miners Welfare in the Central Midlands League. Initially known as Holbrook, they started in the Central Midlands Premier and although they finished 3rd from bottom in their first season, things soon improved. By the turn of the century they were champions, winning promotion to the Supreme Division. In 2003 they changed their name back to Holbrook Miners Welfare, and became  founder members of the Eastern Counties League in 2008. They've been there ever since, with their best ever finishes coming in their first 2 seasons when they finished 3rd on each occasion. They settled on their current name in 2010. Despite a respectable 8th placed finish last season, times have been tougher this time out, and they sat in 17th place at the start of play.

Holbrook Sports were regular participants in the FA Cup for a number of years, but have not played in the competition since 2013. Their best progress has been the 1st Qualifying Round, a feat they have achieved twice. Amzingly they beat local rivals Belper Town en route on both occasions, despite being in a much lower league at the time. In the FA Vase the club had a memorable run to the FA Vase 5th Round in 2011. After beating Sleaford, Gedling Miners Welfare, Arnold Town, Holwell Sports, St Helens Town and Lancing, they lost 3-1 to current NPL Premier side Coalville Town.

I only planned this game in the evening before I left for my couple of days away. There were initially around 15 choices for games this evening, but gradually they were whittled down to a final 4. Greenwood Meadows, Retford, Belper Town (FA Youth Cup) and Holbrook Sports were the contenders, and due to various factors, mainly the fact that I could get a decent pre-match pint before, I plumped for Holbrook. It was to be doubled up with an afternoon revisit to Matlock for an NPL Academy game. It had come up as a possible option a few times but my regular hopping pal Chris was not keen, saying they were unreliable at producing a programme and that the ground was bland. However, proving that not all Chris's think the same, another that I know said it was the best option out of the 4, and it was also the most geographically sensible for me in terms of mileage. 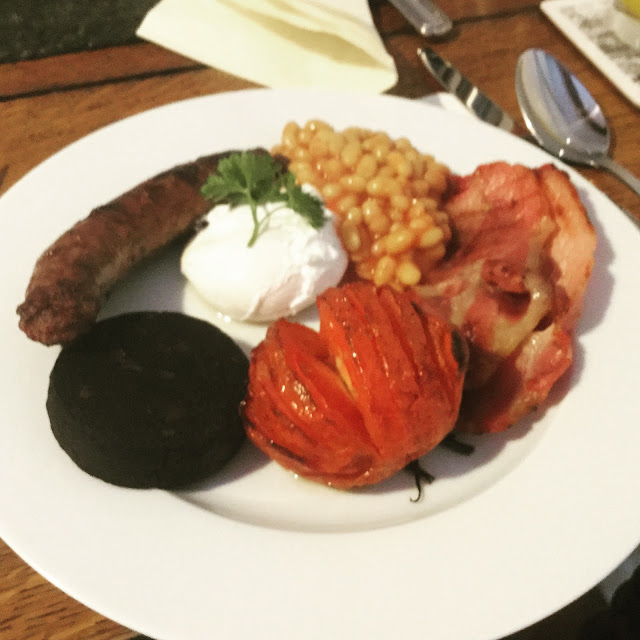 On the day of the game, I enjoyed a cracking breakfast at my hotel, before settling up the bill, and leaving at 9am. I had a 4-hour drive from the Lake District to the Peak District, with a brief stop for petrol. I was not helped by some very slow vehicles on single carriageways, driving at well below the speed limit. One that stuck in my mind was a motor home whose letters on the number plate spelt out 'WANX' - an unintentional personalisation of ever there was one! I got to Matlock just before 1 and after parking up in a side street just up the road from the ground, I made my way into town. I went to the local Wetherspoons and had a pulled pork Burrito and a pint of Thatchers Gold for lunch. I'd have liked more time in what looked a lovely town, but with kick-off approaching, I got some cans of diet Irn-Bru from Iceland and went to the ground. As with all NPL Academy games, entry was free and I was given a good welcome by some Matlock fans who were still chuffed with their win at Workington last night and were keen to ask me about the game. As for this afternoon's game, it was decent as ever for the NPL Academy. Hednesford had the early chances but Matlock soon took control. They went in at the break 2-0 to the good, thanks to lobbed goals from Luke Keen and Jack Madin. The visitors pulled one back from a penalty five minutes from time but Matlock held on and deserved their win. It had been an enjoyable visit to a great ground and a chance to get some updated pictures in daylight. 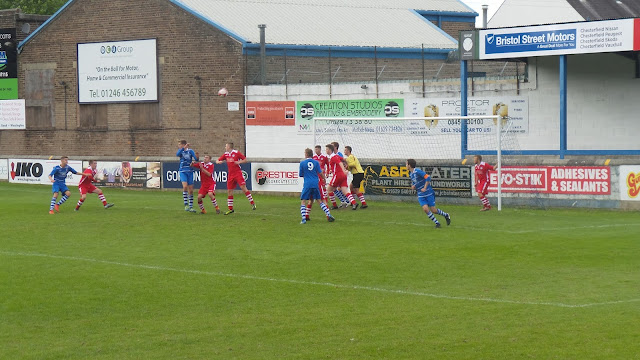 I left the game and drove to Holbrook Sports, arriving at 4.30 and parking at the ground, so I had plenty of time to kill. Initially my plans were to walk one of 3 pubs that were around 2 miles away. I wish I had upon reflection, but I wasn't to know that at the time. Instead, I got a bus into Derby, after reading online that there was a bus stop near the ground that went into Derby. I was shocked when I got on the bus and was asked for £6 return for a 5 mile journey - in Wycombe that would have been half the price, and I thought living up north was supposed to be cheaper. I decided to stick with it though, getting into Derby just after 5. I wish'd I checked the buses back too - for such a pricey service, it was a bit of a shocker that they only did a bus every hour - especially during peak time. I onky had around an hours free time then, and I used that to go to the Silk Mill Ale and Cider house. I chilled with a pint of Welsh Warrior cider before walking back to the bus station and got the 6.10 bus back to Holbrook. Getting back to the town at 6.35 I went in the Dead Poets Inn, which was excellent and really homely. I had a pint of Happy Daze cider, before making my way to the ground, arriving just after 7PM. 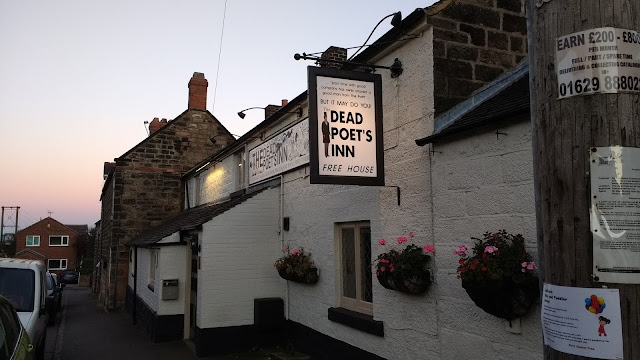 There was no one at the gate so I went through with some of the Anstey Nomads players and went into the tea bar. I paid my £5 entry and although there was no programme tonight, the friendly lady offered me a back issue for free. With me not being that hungry I made do with some cookies. I recognused a couple of fans that had been at the Matlock game that afternoon and said hello. A later headcount revealed that there were 25 fans there and the majority of them will have enjoyed their first half, despite it being goalless at the break. Only some timely blocks had prevented goals, in what had been a pretty open game. At half time I went to my car to get my coat as summer was well and truly finished and it was getting quite chilly. The second half saw the hosts take firm control. Anstwy Nomads it seemed, had real issues at dealing with high balls and they conceded a pretty quick treble of headed goals to see them at a 3-0 disadvantage. A low deflected shot from the hosts number 9 decived the keeper and made ot 4-0. The frustration got to the hosts number 10, and his second booking for saying something to the referee meant that he recieved his marching orders. His team did have some cheer shortly before the end as a penalty was won and converted right on full time. 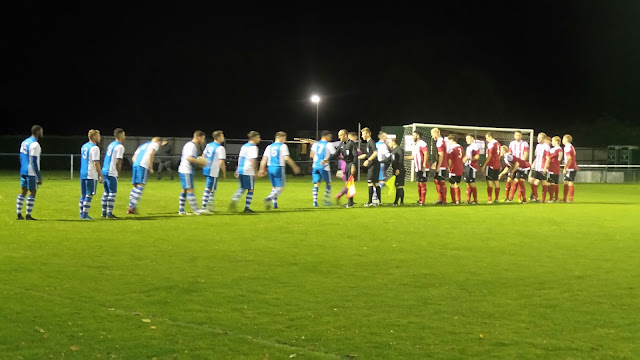 During the game I'd been keeping an eye on the game 2 miles down the road at Belper Town where Alfreton Town won a thrilling FA Youth Cup game 5-4. I'd been hoping for extra time and penalties so I could go and see some bonus football after my own game, but it was not to be. In my other games that were up for consideration I missed a 0-0 between Retford and Askern Villa and dodged a real bullet at Greenwood Meadows as their game was called off, with them being unable to raise a team. I left the ground at 9.45, tuning into Pete Price on City Talk, thanks to an online stream. He talked about a variety of subjects, most pertinently about a recent speeding ticket he had been victim of. I was expecting similar bad news on that front, after being flashed on Friday and so it turned out to be when I found an unplesant demand when I eventually got in around midnight. I didn't let that spoil what had been a decent couple of days away however, and stayed up for a couple of hours before grabbing some much needed sleep. 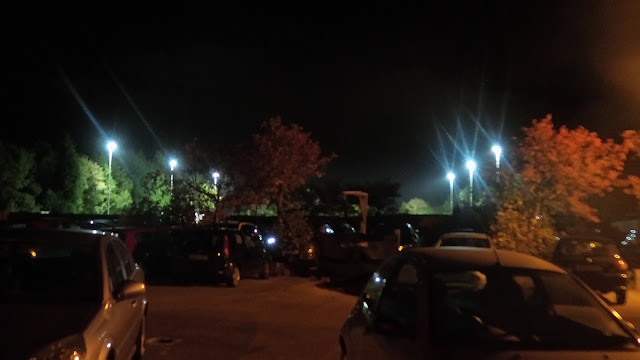 THE WELFARE GROUND is a pretty basic setup, with both covered stands on one side. One has 50 seats and around 100 standing, whilst the other has around space for another 20 standing. It's quite a quirky ground, with around a third of it out of bounds to spectators. The facilities at the ground include cold cans of beer and cider, plus burgers and hot and cold drinks and snacks. Further afield, the Dead Poets Inn has real ales and ciders, as well as food such as chilli con carne and pasta. 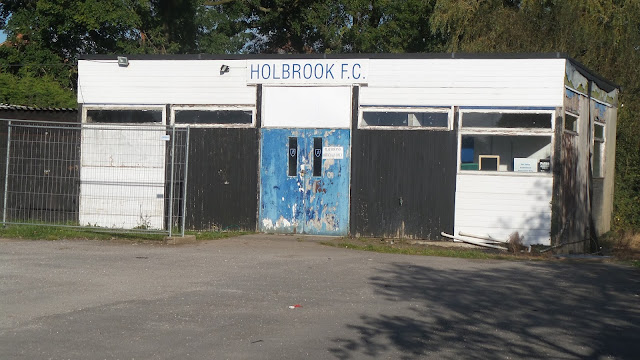 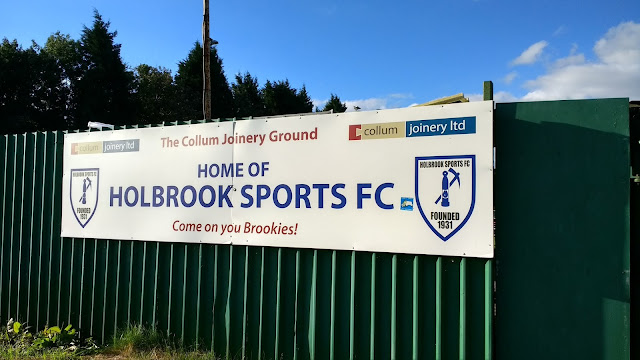 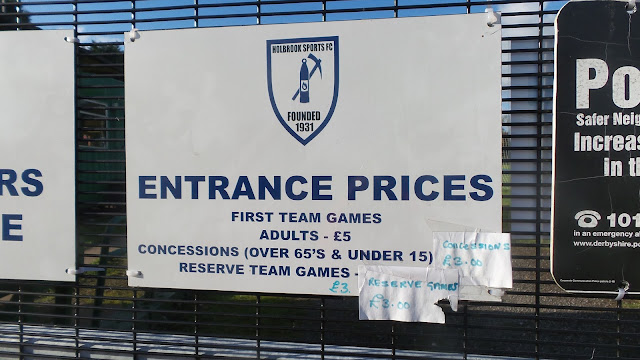 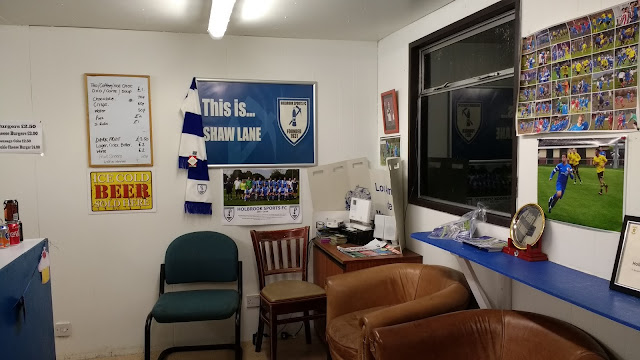 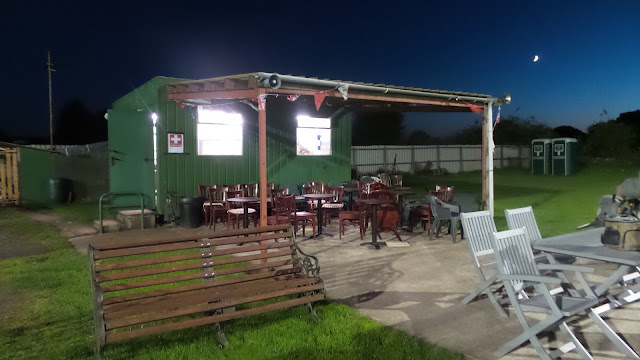 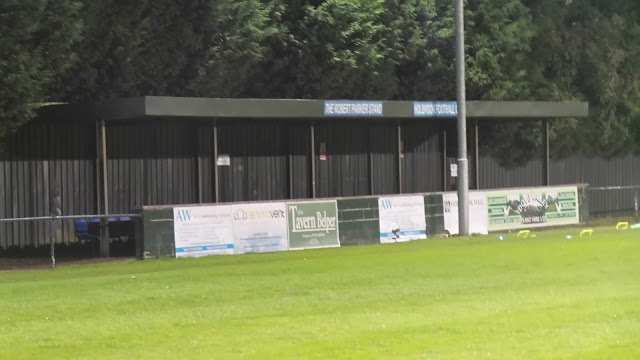 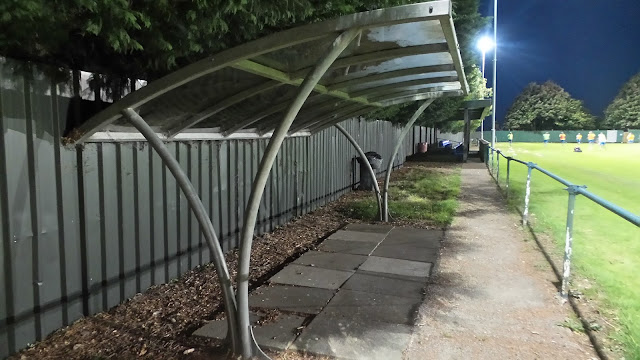 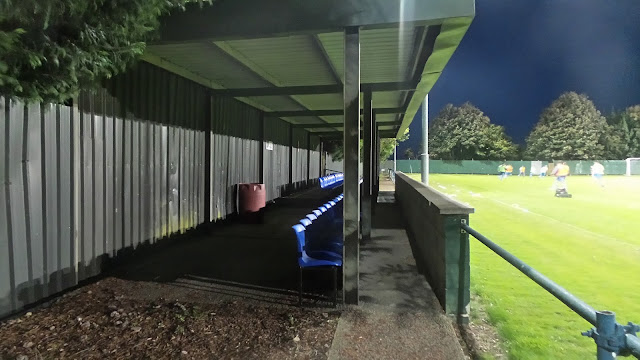 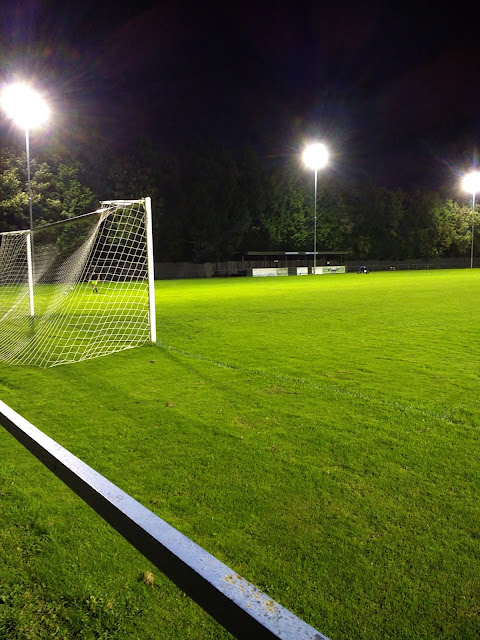 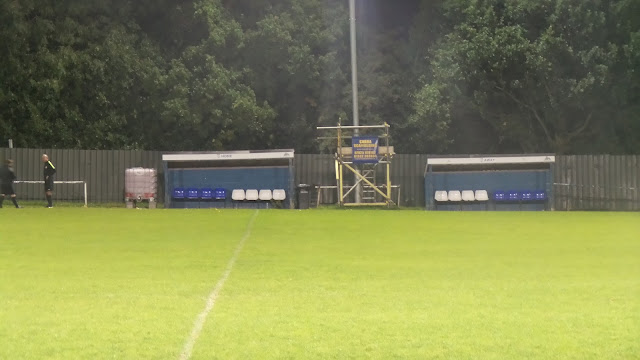 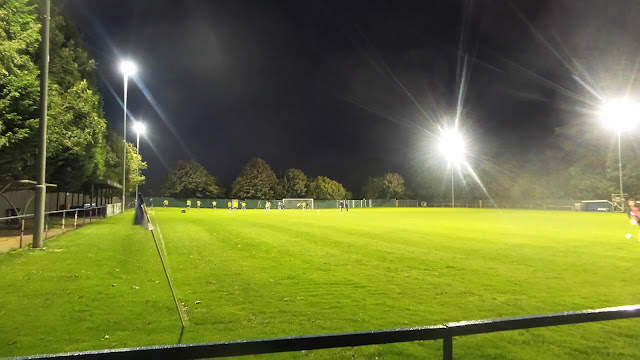 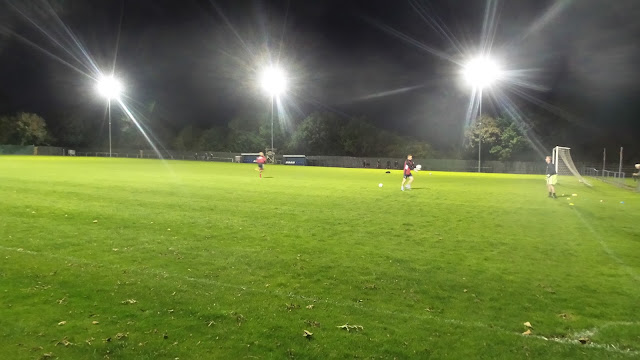 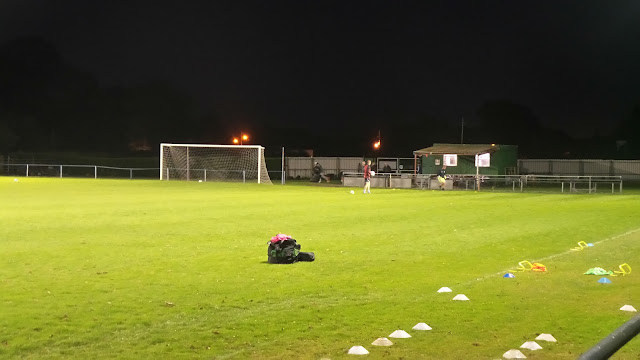 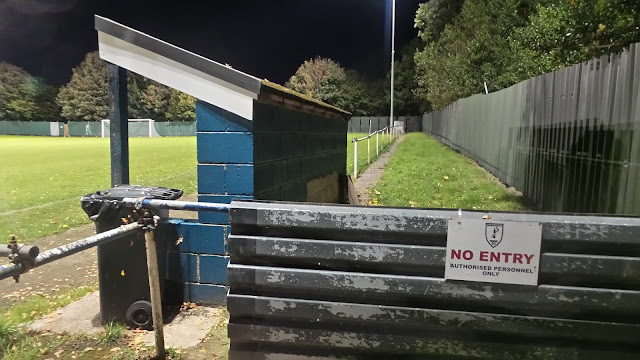