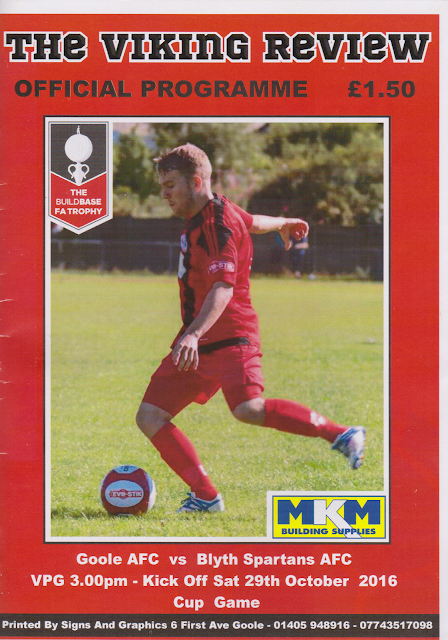 GOOLE FC was formed in 1997, a year after the town's previous club Goole Town had gone bust. Starting in the second tier of the Central Midlands league, success was immediate with them losing just once all season on the way to the league title. The following year a 3rd place finish in the CML Supreme Division was enough to see them progress again, this time to the Northern Counties East Division 1. A third successive promotion was gained when they lifted the league title they won promotion to the NCEL Premier. They did very well at the higher level and in their five seasons here they only finished outside the top 6 once. 2004/05 saw them win the NCEL Championship and win promotion to the Northern Premier League D1. Despite finishing second-bottom, they survived due to other clubs resigning. The following season, 2006/07 saw them recover well and post their highest ever league finish of 7th. Since 2007 when Division 1 faced a geographical split, they have struggled, only finishing in the top half once. The struggled has continued this season, with only winless Burscough keeping them off the bottom of the league.

The FA Cup has seen moderate success, though they are still yet to have a real run. Their best progress is the 2nd Qualifying Round, which they have reached twice, taking both Ashton United and Gainsborough Trinity to replays before bowing out. The FA Trophy is a similar story with the 2nd Qualifying Round again the best they have managed. In the FA Vase, their debut season of 1998/99 saw a good run to the 4th round before they lost 1-0 to Bemerton Heath Harlequins. Local cup wins include the NCEL Trophy in 2000 and the West Riding County Cup in 2007. The record attendance came for a game against Leeds United when they played them in a 1999 friendly game. The club's first ever game marked their biggest ever win when they defeated Blackwell Miners Welfare 8-0. 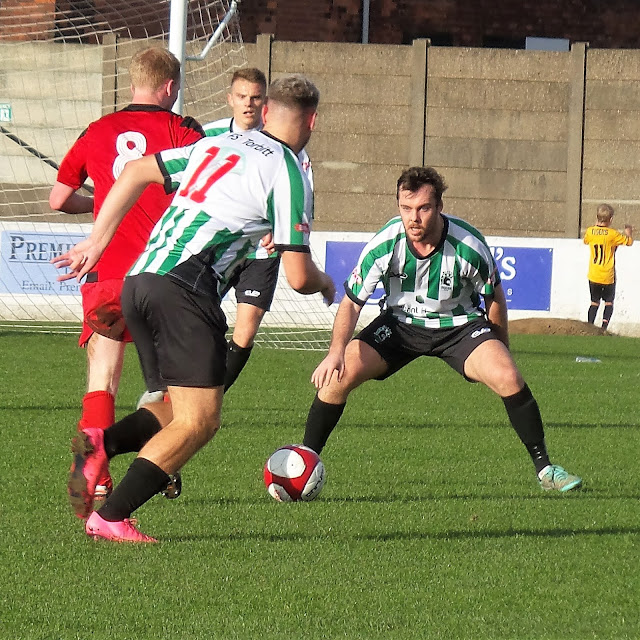 Originally on this day I was planning to go to Doncaster Rovers v Wycombe Wanderers. I had a couple of mates that I knew in Doncaster, and I was also going to a concert in Leeds in the evening. Everything was in place - the pre-match pub crawl planned in minute detail, plans put in place to dump my car at my hotel for the night in Leeds and let the train take the strain - I'd even gone as far as getting bargain train tickets to Doncaster well in advance. But the weekend before, Wycombe played out of form Barnet at home, and lost 2-0. I decided there and then that I'd not be going to the Doncaster game after all. It wasn't the result so much, it was more the soul-destroying insipid brand of dull football that we'd been playing for around a year now. Last Saturday was the last straw, and the following weeks trip to Portsmouth was pretty much knocked on the head too. As soon as I got home from the game, I started looking at what games were near Doncaster. Though it wasn't the nearest, Goole was simple to do by train. I'd still be able to keep my pre match drinking plans in place, and Goole was one I'd wanted to do for ages as the home-made pie was legendary. It was also a bonus that it was a good game in the FA Trophy against high-flying Blyth Spartans from the league above. 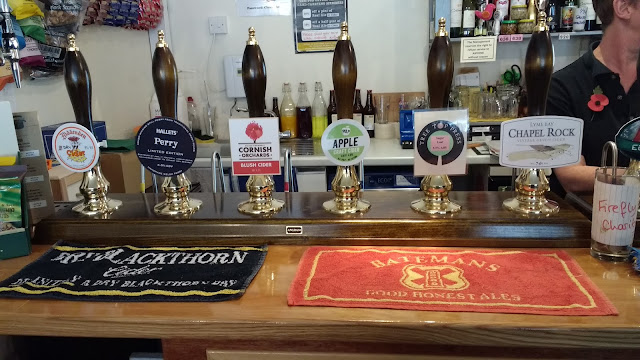 The day of the game arrived with me staying in Eccles as it was a convenient halfway point between my game last night at Bootle, and tonight's hotel at Leeds. I'd never used AirBnB before, but my first experience was a good one with a comfortable room for £17 for the night. I'd had a restless nights sleep but woke up feeling refreshed when I woke at 7.30 am. After getting ready and my stuff together, I stopped at Morrisons to pick up some Irn Bru and a Tuna Wrap for breakfast before leaving Eccles at 8.30. I arrived at my hotel an hour later, parking up and getting the bus into Leeds. I did consider having a pint in Wetherspoons, but the one I went to didn't have any real cider on. With my favourite pub in Leeds, the Hop not opening for another 2 hours I got a Mexican bake and a Sausage and bean bake from Poundbakery before going to the station to wait for my train. 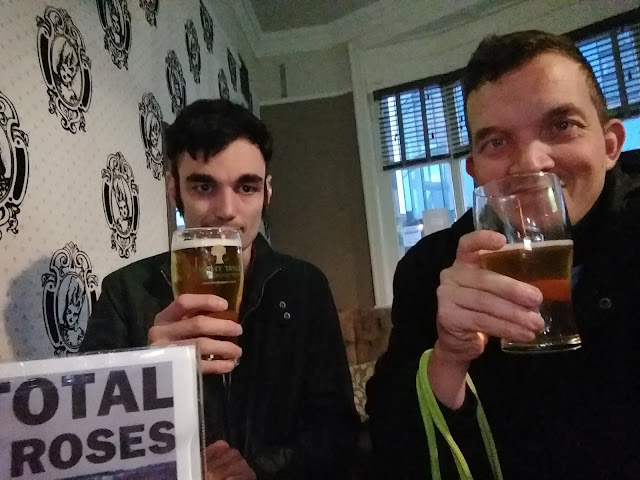 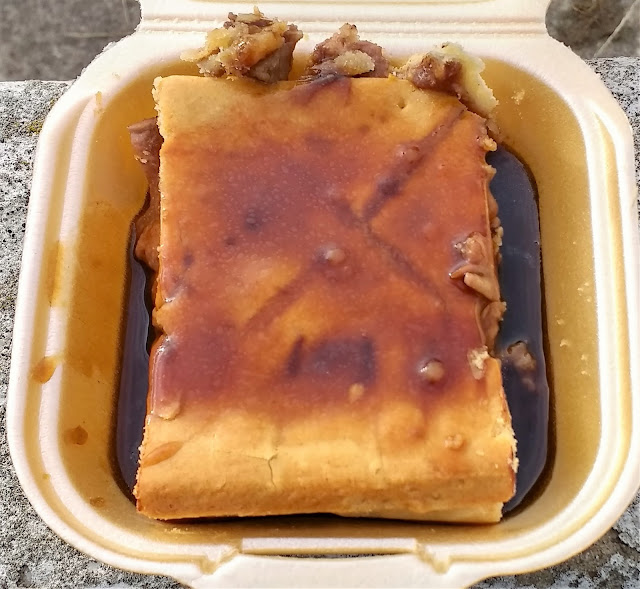 It took 40 minutes on the train, with me arriving at my first pub, the Queen at 12.15 where I met Doncaster fan Matty and his Dad. My first pint of the day was Thistly Cross Jaggy Edge at 7.5% which was a nice dry one. I had to make do with a retry in our next pub too, the Flying Scotsman Tap where I had Lilley's Mango. The last stop at Doncaster Brewery Tap was the best, and I wish I'd just gone straight there to be honest. There were 7 ciders on, several of which I hadn't tried before. I had a pint of Tree Top Press Sugarloaf, before having a half of Pulp Apple Craft Cider. Matty and his dad had been great company, and it been a good session. It was just a shame I didn't have more time as I'd liked to have had more in the Brewery Tap, plus Doncaster is a great town for drinking, with several other pubs that looked good. By now though, it was time to get my train to Goole, which left at 2.20 and took 20 minutes to get to Goole. On the way up to the ground, I stopped at Cash Converters to see what they had. I spotted a Sega Saturn and a laptop that I wanted and made a mental note to go back and try and barter a deal after the game. I got to the ground with 10 to spare before kick-off and was pleased to see that there were still plenty of programmes left. After popping into the club shop I went to the tea bar. The Goole pie has legendary status for its quality and that was fully justified as it was delicious and homemade. Later on, I had some chips and gravy plus a couple of pints of Strongbow Dark Fruits. I then took a place on the halfway line for the game, the report of which from the Non-League Paper is below. 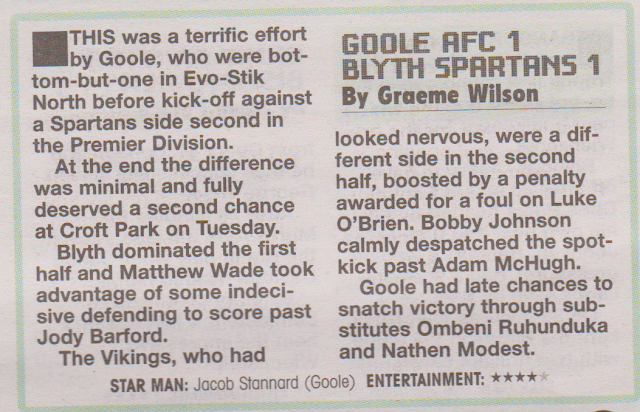 So it had been a good game with Goole getting a result against the odds and earning a replay in the week. The same could be said of Wycombe who earned a credible 2-2 draw at Doncaster which was a fantastic result. I went into Cash Converters on the way back, though sadly they couldn't offer me a deal as the manager was not there. It was a shame as when I checked later, the laptop was a great deal on its own and I wish I'd bought it now. I got the train back to Doncaster and had a couple more pints with Matty in a pub called the Leopard near the station, and it was good to chat about the game and find that Wycombe had been clung on at the end to get their draw. I left the pub at 6 to get my train, though for some reason it never turned up and I had to get a later one. It meant that I had to pay for a Taxi to get me to the Brudenell Social Club where the Lancashire Hotpots were playing. I had a good night there, amazingly sticking to one pint, given that I'd had a fair few earlier, that said the effects still hadn't worn off. The concert finished around 11.15 at which time I got a taxi back to my hotel using an app called Gett. It was very efficient and I was checked in and in my room 20 minutes later. I fell asleep pretty quickly having a good and enjoyable day. 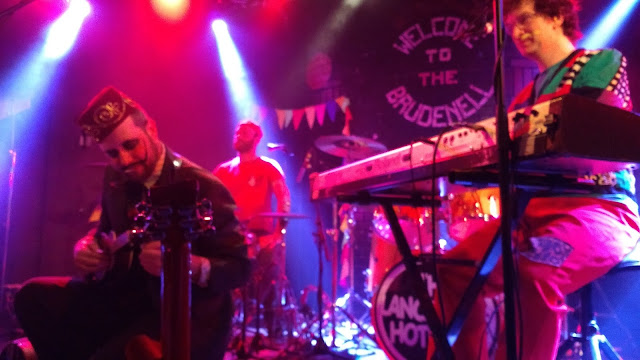 THE VICTORIA PLEASURE GROUND is a traditional non-league ground, although it does suffer from having a running track. There are 2 covered stands, between them holding 300 seated and 700 standing. The rest of the ground is open standing. Facilities at the ground are excellent with a decent bar and a club shop but by far the highlight is the tea bar. The home made steak pie has legendary status amongst fans of NPL clubs and groundhoppers alive and deservedly so as it is very tasty and the best pie I have ever had in a football ground. There is also a good range of other food on offer, all at good value prices. 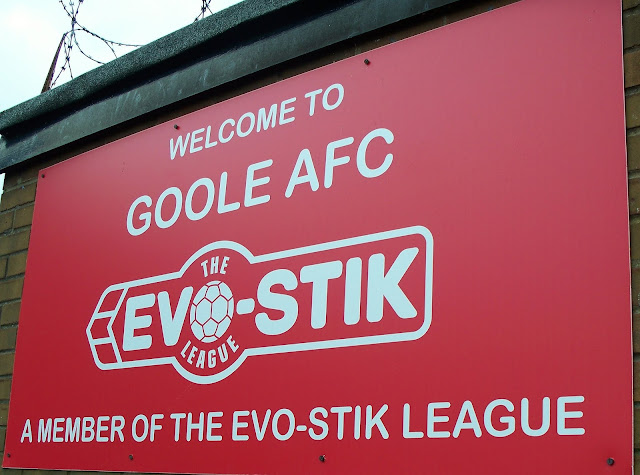 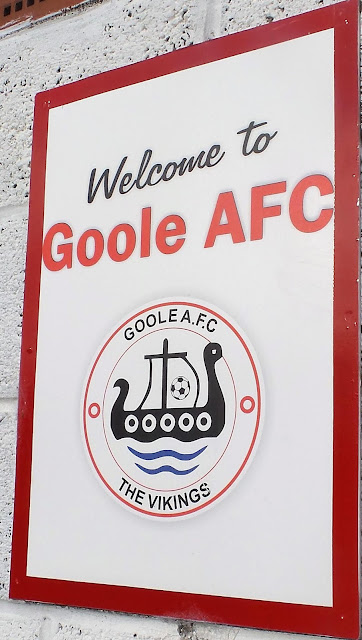 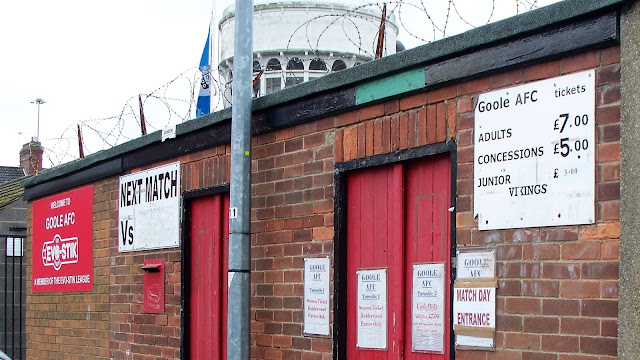 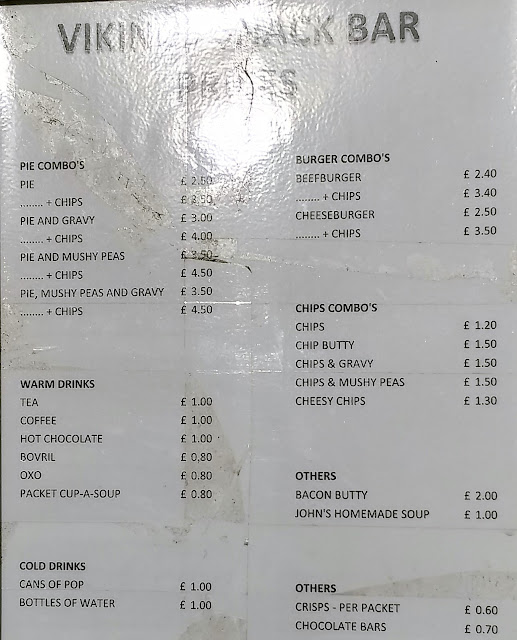 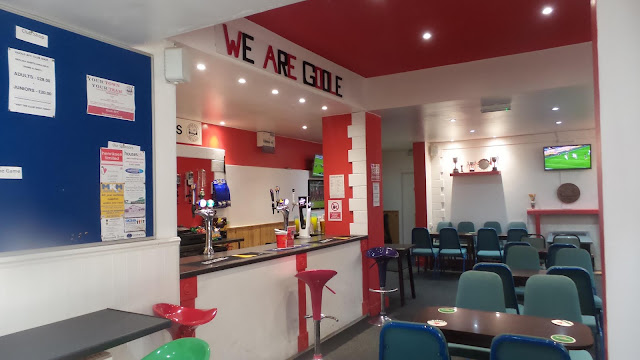 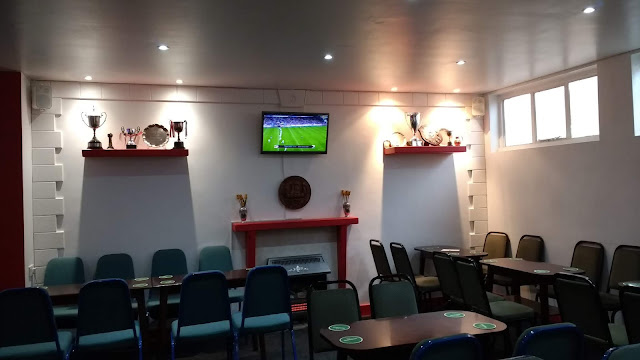 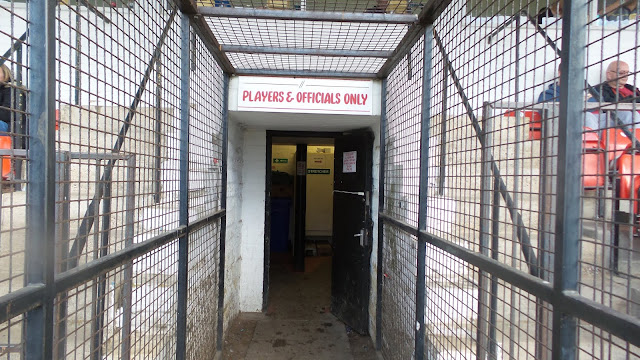 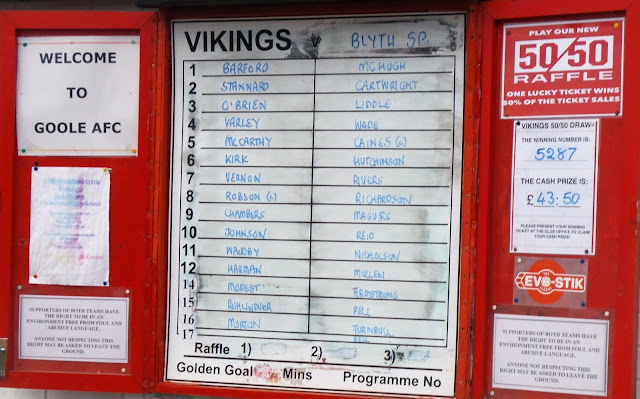 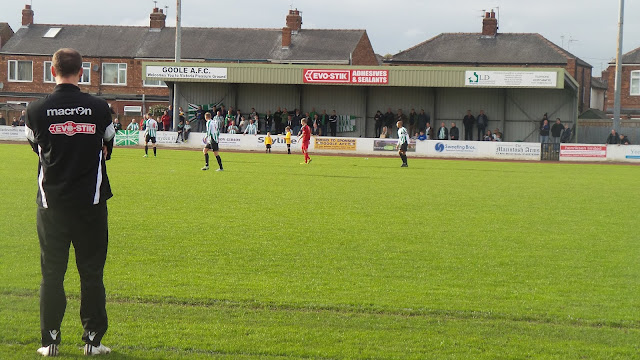 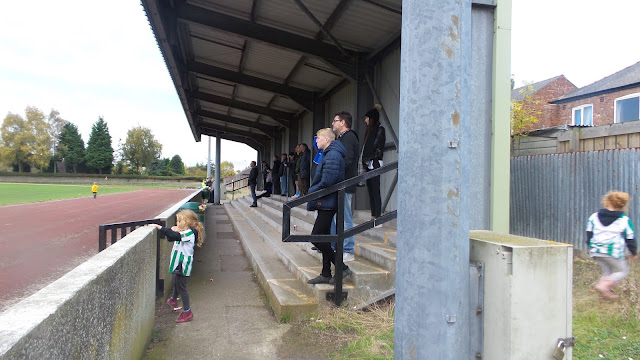 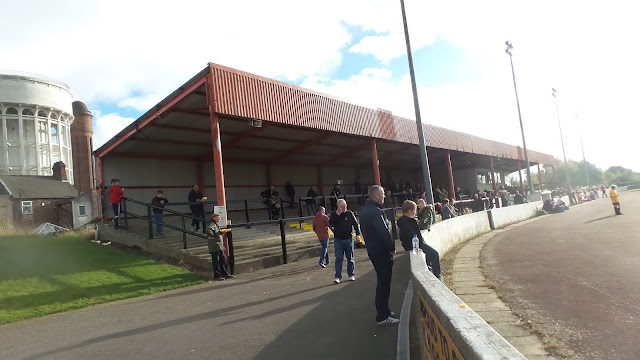 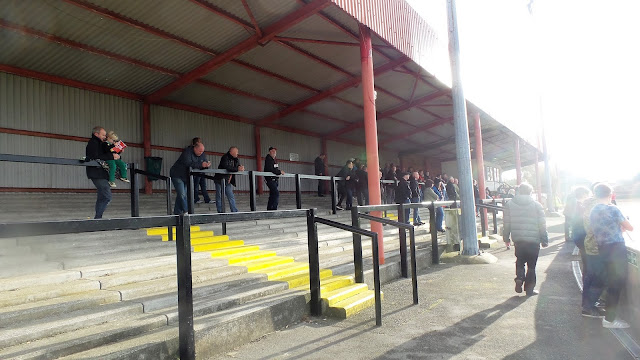 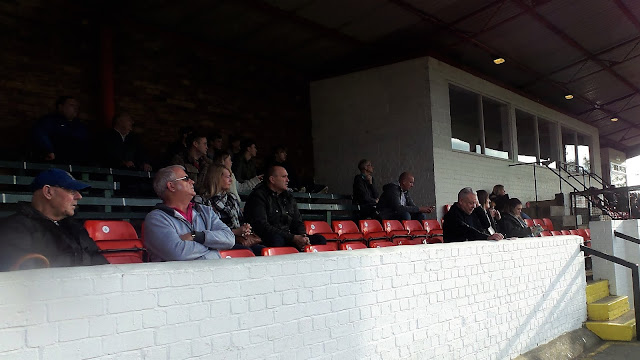 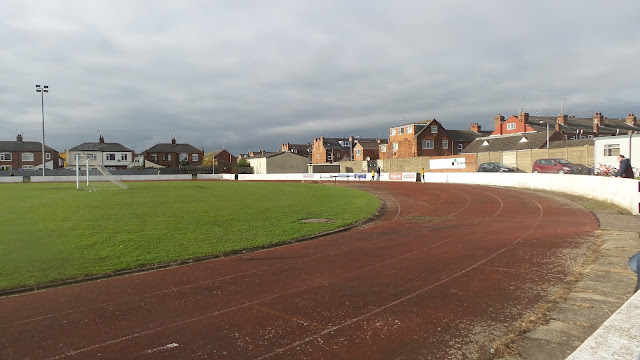 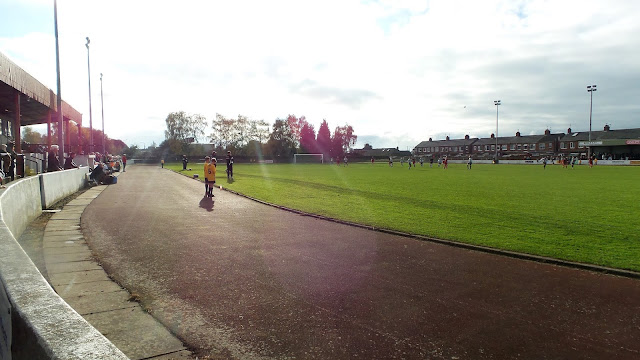 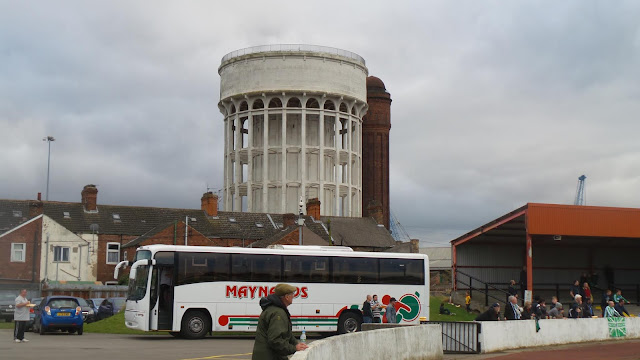 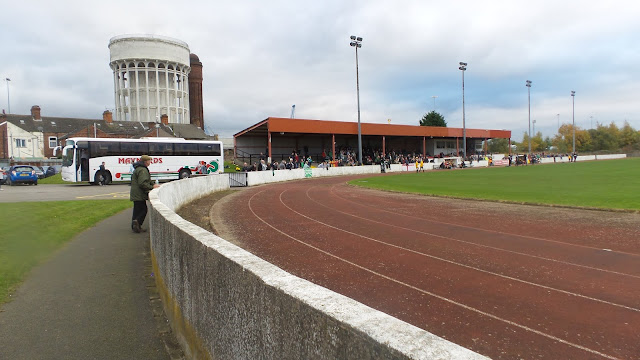 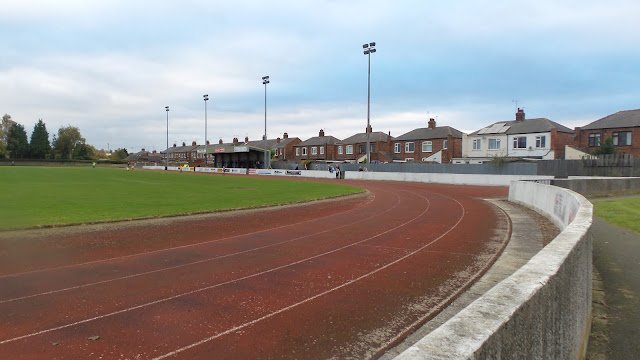