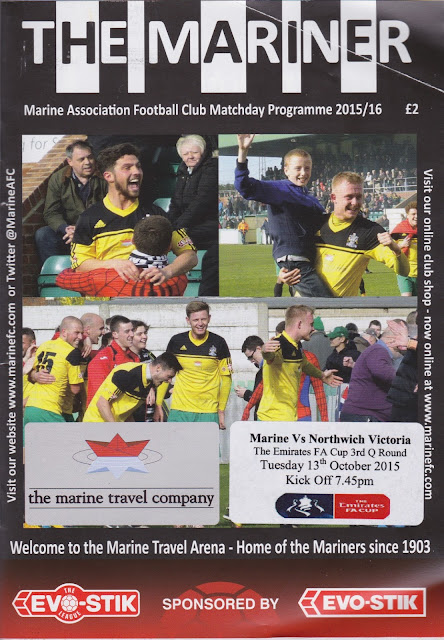 MARINE FC was founded in 1894. After playing in various local and county leagues they joined the Northern Premier League in 1979 and have remained there ever since. They can boast the proud record of never being relegated, even after it became a 2 tier league a few years later. They were even Champions on 2 occasions in the mid-1990s but were unable to take promotion as their ground was deemed insufficient by the powers that be. Lately, their league placings have been more moderate, only avoiding relegation last season by the skin of their teeth after finishing in 21st place. This season has seen a slight improvement, with them sitting in 17th place at the start of the game. 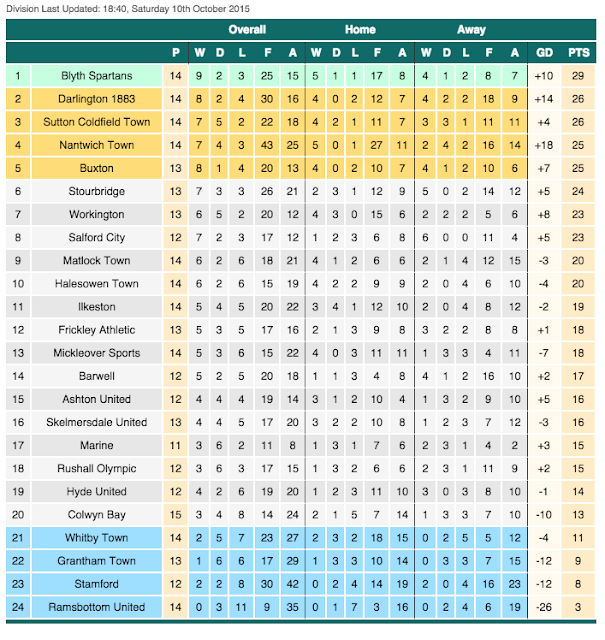 The FA Cup had proved a happy hunting ground on many occasions, none more so than the 1992/93 season when they reached the 3rd Round. That season they beat Emley, Heanor Town, Nantwich Town, Runcorn, Halifax and Stafford Rangers to set them up with an away tie at Crewe Alexandra. The national media got interested and manager Roly Howard was famously unmasked as Kenny Dalglish's window cleaner. The former Scotland international and Liverpool star is the club's patron but was unable to prevent them from losing 3-1 to the Gresty Road side. The club were FA Amateur Cup finalists back in 1932 but lost in a heavy 7-1 defeat to Dulwich Hamlet in a game played at the Boleyn Ground, home of West Ham United. In the modern day version, the FA Trophy, the semi-final has been reached twice. Most recently was the 1991/92 season when amongst others they beat Conference sides Stafford Rangers, Kettering Town and Redbridge Forest before succumbing to Witton Albion over 2 legs. Various local competitions have been won, most recently the Liverpool Senior Cup in 2008. 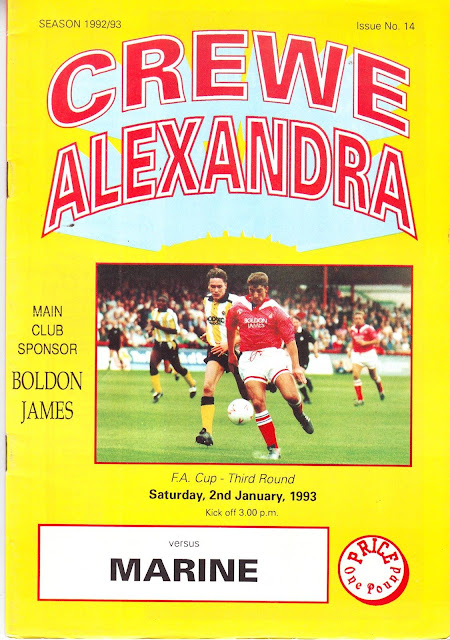 Marine was one of those grounds I had wanted to visit for ages, mainly due to seeing their club shop and the vast array of old programmes and other football literature that it sold. It had evaded me so far, but I was pleased when the chance to visit on my week off came up, as I'd already turned down the chance to visit AFC Liverpool at the same ground on a couple of occasions this season. I was also planning a trip into Liverpool in the afternoon and so I was pleased when I found a B&B just over a mile from the ground, park up and not have to worry about driving. Originally I was supposed to be seeing a league game here, but in the end, it turned out to be an FA Cup game as opponents Northwich Victoria had fielded an ineligible player in previous games and had to play their 2nd Qualifying Round game against Hyde on Saturday. They came through victorious to set up the tie for tonight. On the day of the game, I’d not had much sleep, not dropping off until 3am. But I wanted to get up at 8.15am, ready to leave for 9. Luckily I’m not someone who needs much sleep, so after having a quick wash and some breakfast, I was pretty much ready to go. I jogged down the postbox to post a letter and checked the oil in my car before leaving bang on time. The journey up went very well with minimal delays and so I was at my hotel by 12.30. I always forget something when I go away and on this occasion it was my phone charger, meaning I'd have to get one while I was out, adding yet another to the large collection I have at home. I checked in and dumped my bags in my room. The lady running the place was really friendly and has a couple of lovely dogs. 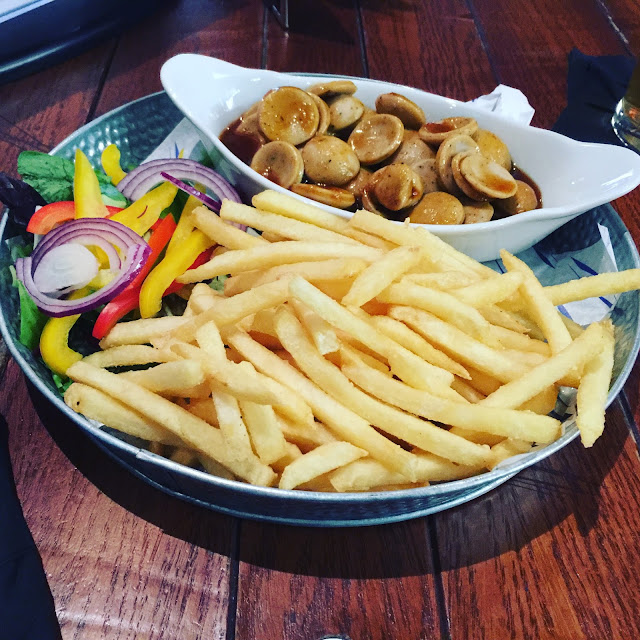 From there I walked the 20 minutes to Marine FC. I'd already been talking on Twitter to a guy called Barry Lenton. He and another man from the club were there early afternoon and said I could come down if I liked. I figured that it would be nice to get some pictures of the ground in daylight, plus I could have a look through the massive collection of old programmes that they had. They were trying to whittle them down and move them into the new, smaller club shop as the council wanted to charge them more council tax on the building. As a result, they were knocking down the programme shop, as it was not financially viable to keep it open. I bought around 10 fanzines for the princely sum of £2. They were a really friendly and interesting pair of characters and Barry told me that they played a friendly with Wycombe at Loakes Park in the late 70s, prior to the FA Trophy final, a Marine FC tradition it would seem. Barry himself had been supporting the team since 1963 and had various roles at the club, not least establishing the supporters club. I said my goodbyes as I needed to get a move on if I wanted to have a decent amount of time in Liverpool. I walked the 10 minutes to the train station, purchasing a very reasonable day saver ticket for £3.70. I put £20 in the machine, hoping to get some notes back, but all I got was a pocket full of change. From there I made my way into Liverpool, getting off at Moorfields station. I suddenly remembered that I  could charge my phone off my laptop, even though I'd forgotten my charger. I did still fancy one though but a brief look around shops proved fruitless. My intended port of call was The Bierkeller. I was initially disappointed that they didn't do Applelfwein but I got a right bargain in any case. A huge portion of Currywurst, fries and salad, along with a pint of Orchard Pig Hogfather cost me £5.60 and were delicious. From there I went to the Level Up retro games shop hoping to get a copy of ISS98 for the PlayStation but my search proved fruitless. I did come up trumps in a local discount bookstore, getting a few music and football related books that will make good reading. I then went for a couple more pints, one at the Richard John Blackler, a Wetherspoons where I had a Mary Maud medium cider, which was a  new one for me. Last port of call was one of my favourite pubs of all time, The Ship and Mitre. There I had a pint of Farmer Jim's Farmyard Perry before getting the train back to my hotel to drop off my stuff and relax for half an hour. I left the room at 6.50 to take the 20-minute walk to the ground. I paid £10 to get in and went to the club shop to pick up a pen and a magazine about the local non-league scene. For the first half, I stood along the side, moving to the stand behind the goal for the second half after I'd had a pint of Strongbow in the bar. 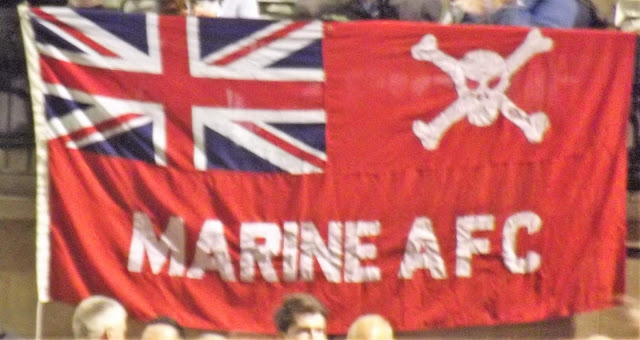 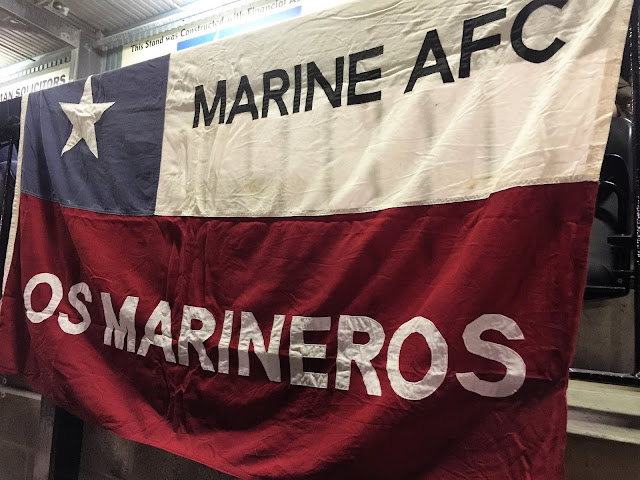 To get to this stage, both teams had to win multiple games. Marine started in the 1st Qualifying Round with a routine 2-0 home win over Clitheroe. They then faced Northern League side Washington in the next round. Despite being 2 leagues below their opponents the Wearsiders managed to get a 3-3 draw. It looked a daunting long trip on a Tuesday night for Marine, but they eventually prevailed 3-2 to set up tonight’s game. Northwich Victoria meanwhile had to start a round earlier, squeezing through 3-2 against North West Counties League side Runcorn Town. A comprehensive 4-0 win over AFC Blackpool set up a trip to NPL Premier side Hyde United. They thought they were home and dry when they triumphed 1-0, but owing to a registration issue over goalkeeper Mason Springthorpe, they were ordered to play the game. In most cases like this, the offending team are expelled from the FA Cup, but the authorities were satisfied that due diligence had been taken and so they were allowed to replay the game. That was on Saturday and a 2-1 victory was enough to see them through to tonight's clash. 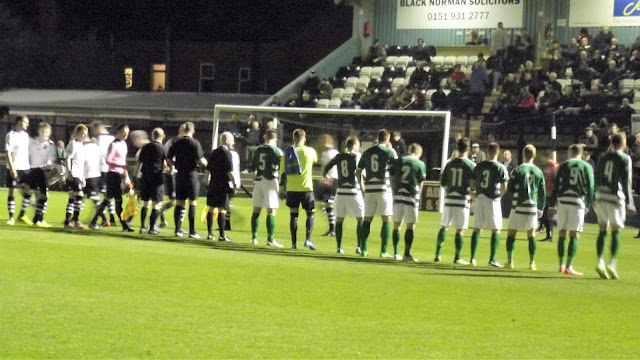 As for the game, Northwich Victoria completely dominated proceedings. They were ahead within the first minute when Jordan Williams opened the scoring with an excellent free kick. The same player doubled the visitors' advantage on 7 minutes, turning well and planting a low hard shot into the net. It was pretty much total domination from the Vics for the first half and I felt gutted for the lovely people of Marine, whilst supping my half time Strongbow. Luckily things improved and the hosts pulled a goal back with a deft lob on 51 minutes. By now I was in the stand behind the goal, sitting in the comfy padded seats for directors which gave me a great view of the goal. Though Marine put a lot of pressure on looking for the equaliser, they were done on the break around the hour mark as the visitors took a 3-1 lead. They had chances to confirm the game but Marine were back in it on 82 minutes with a smart finish from Chad Whyte. Sadly the visitors made it 4-2 through Joshua Amis to seal the game. After the game,  I walked back to my hotel, stopping at the local Wetherspoons on the way. I had a few pints before going back to my room, having a sound nights sleep after a good day.

ROSSETT PARK (Known as the Marine Travel Arena for sponsorship purposes) is an interesting non league ground to visit. Due to space restrictions, there are only 3 sides to the ground, with the dugout side being unavailable to spectators. Unusually the main stand is behind the goal. Opened around the turn of the century it has a capacity of just under 400 and is elevated above pitch level, therefore offering a great view. In front of this is some terracing, probably holding around 1000. The opposite end is another uncovered terrace, holding around the same. Completing the setup is a side terrace with a capacity of around 800. This is covered for the most part.
Other facilities include a bar and tea bar, which are pretty standard for this level of football from what I sampled. There is a club shop selling a reasonable range of souvenirs. Pride of place goes to the excellent programme shop which has a huge selection of books, programmes and other stuff. Sadly this is being knocked down and a selection of the programmes are being retained for the new shop which is under the seated stand. There are plenty of pubs and takeaways nearby, as well as street parking, which is handy as the car park is quite small. 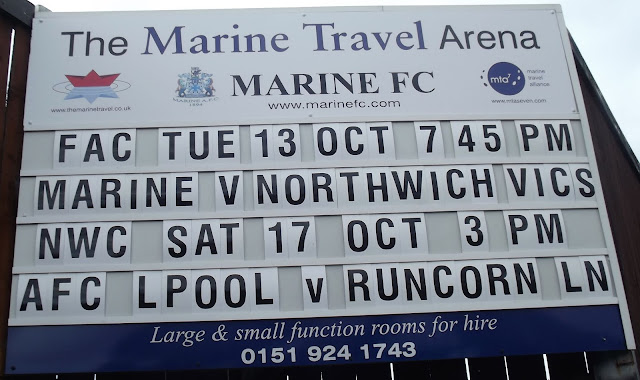 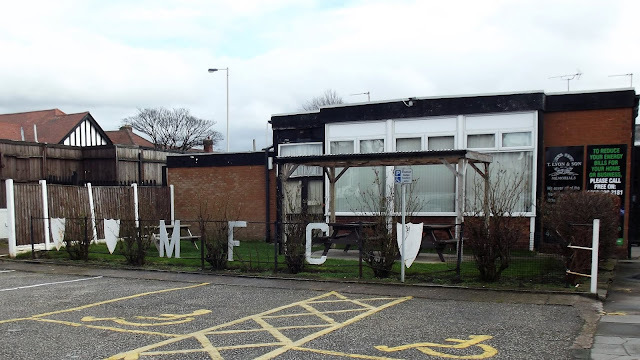 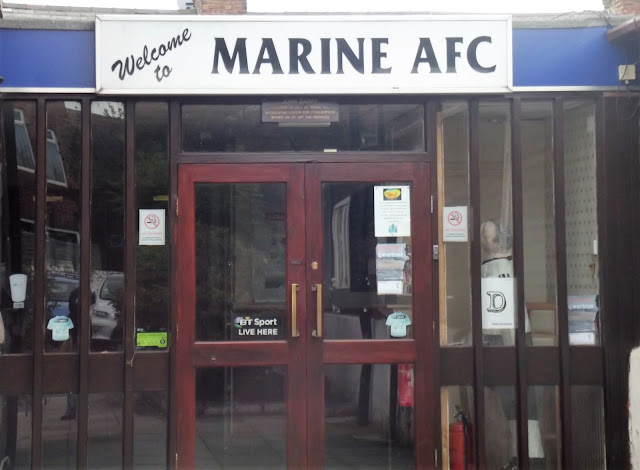 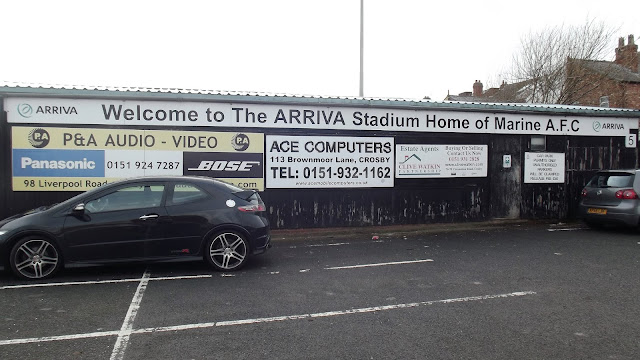 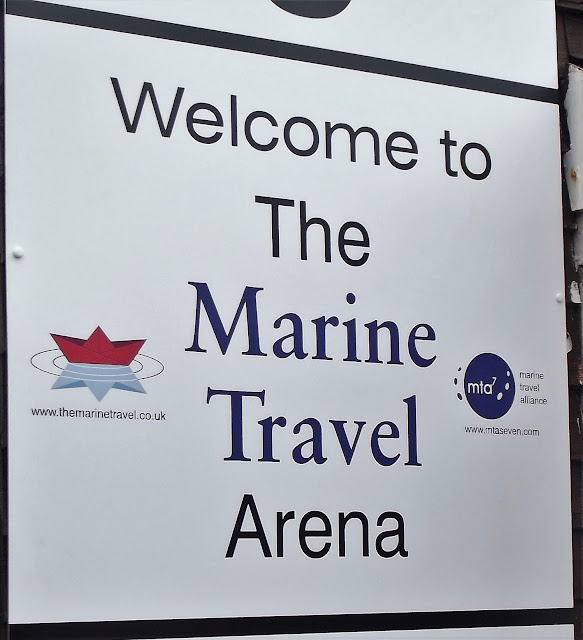 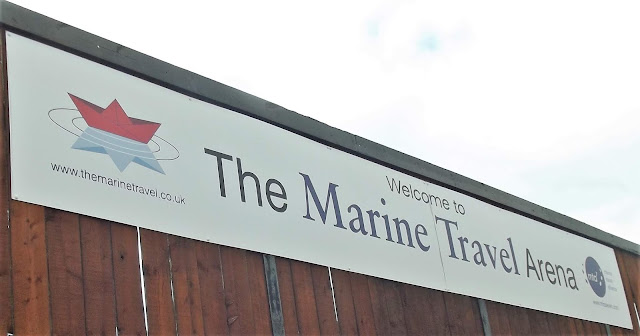 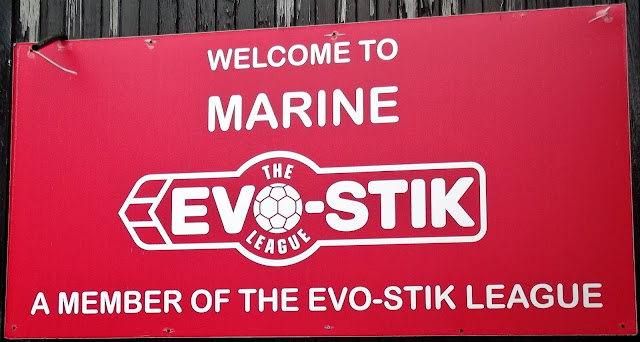 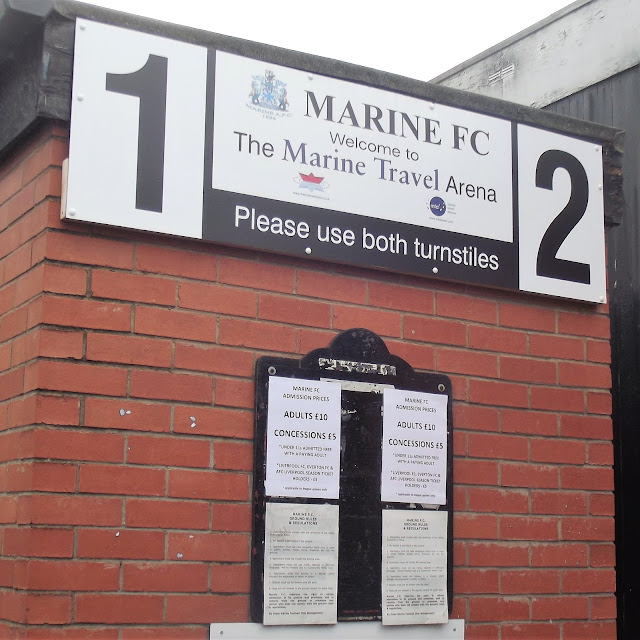 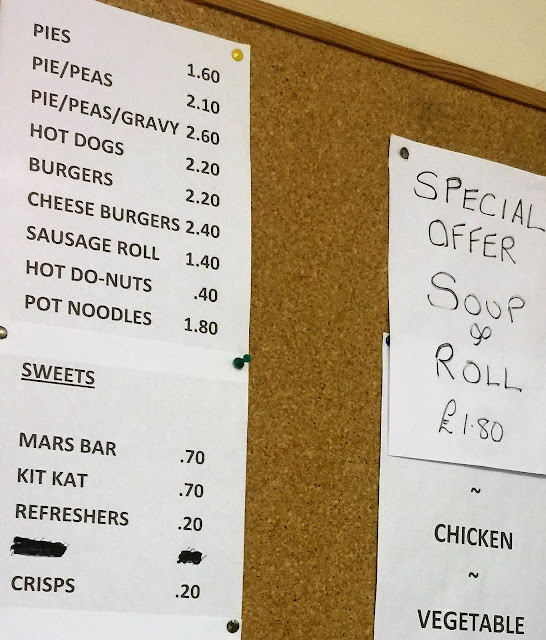 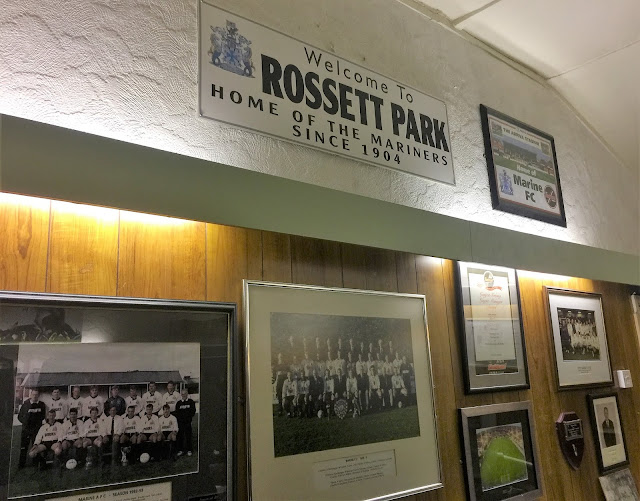 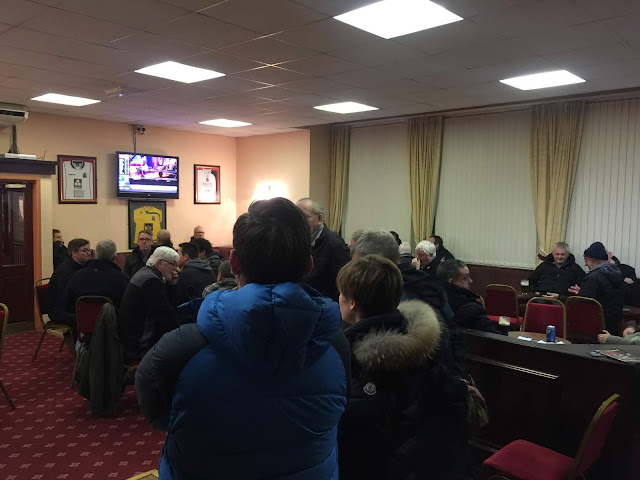 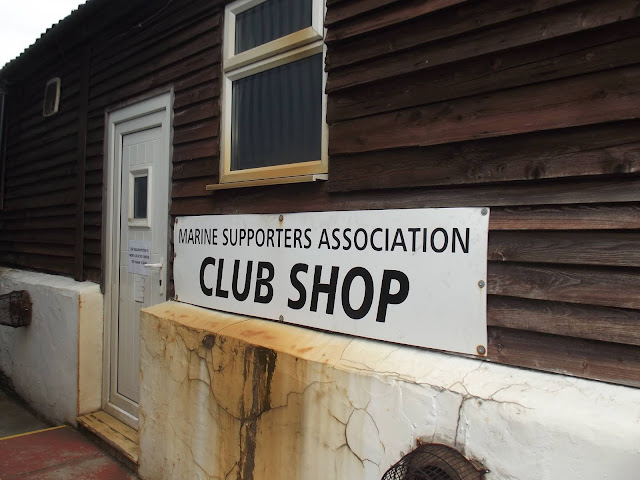 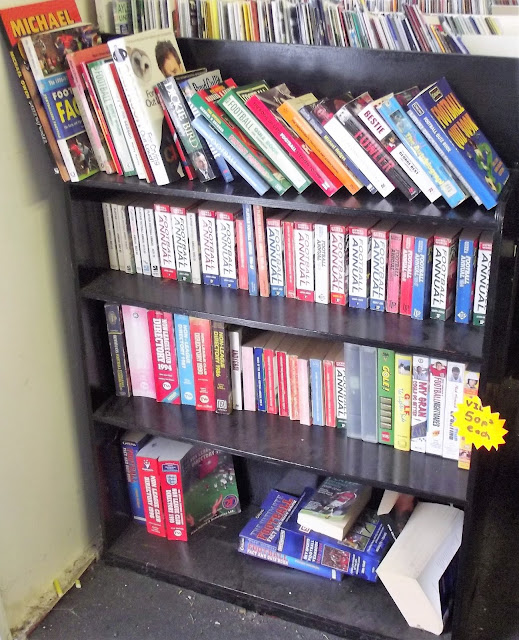 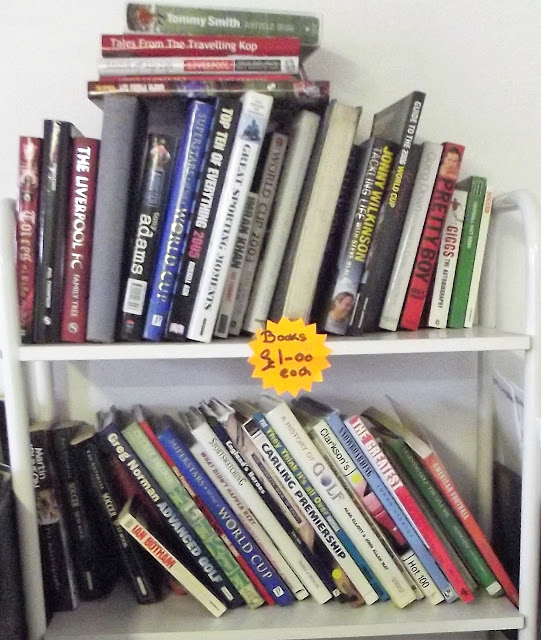 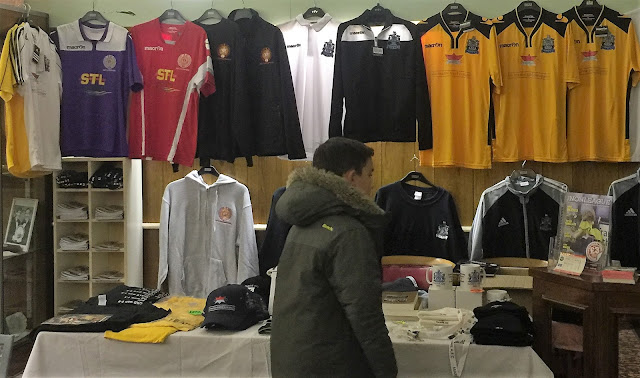 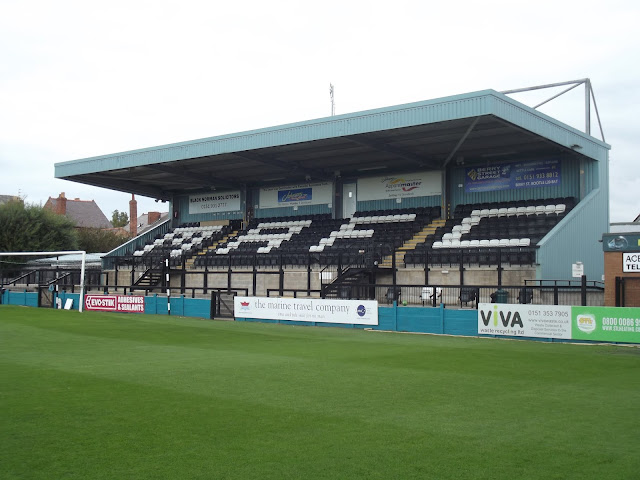 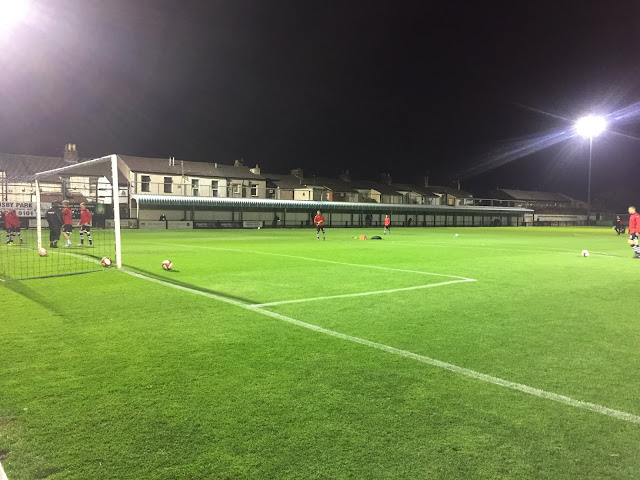 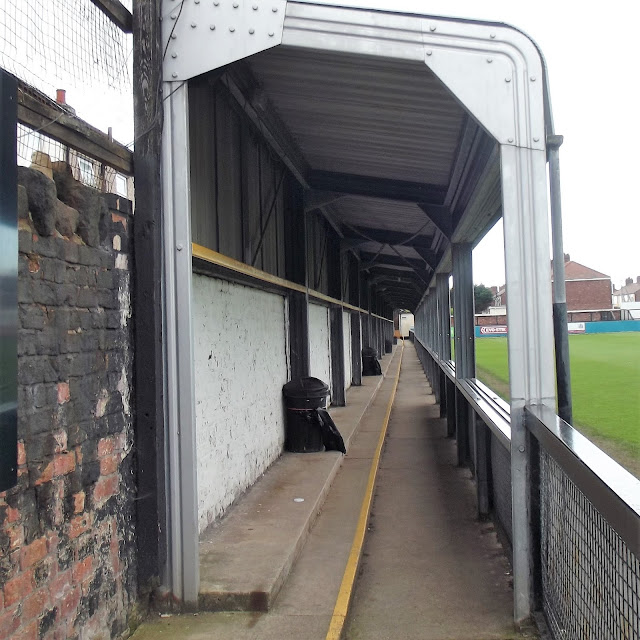 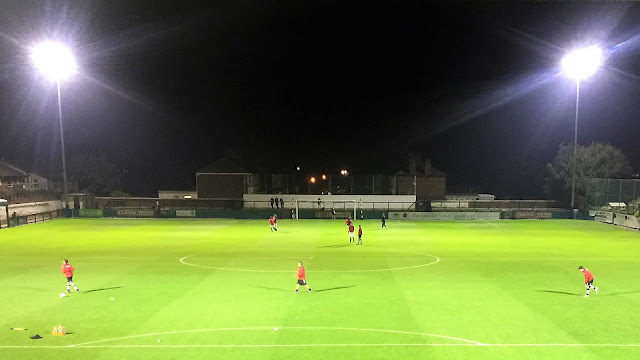 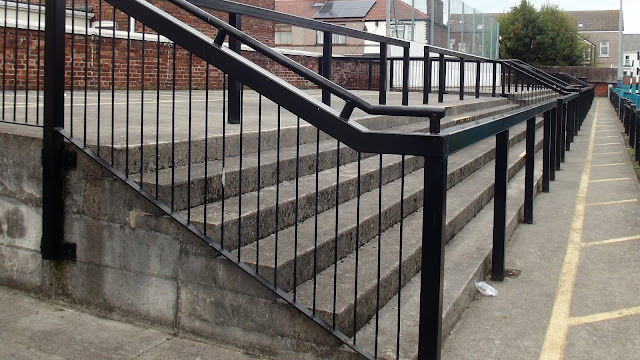 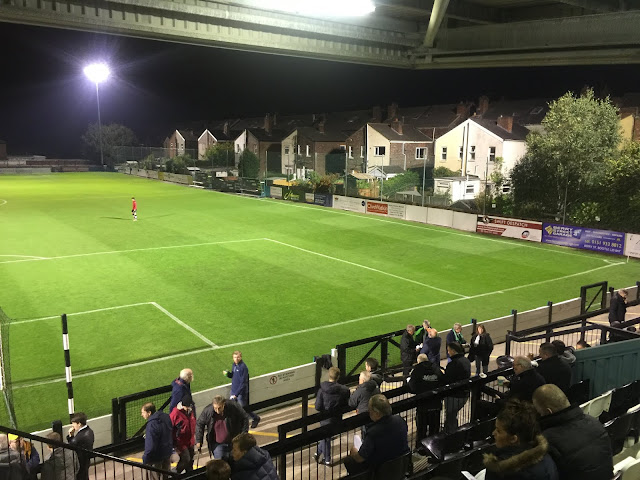 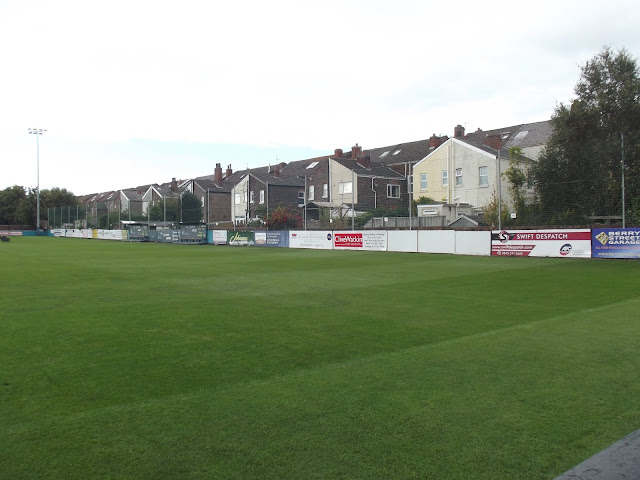 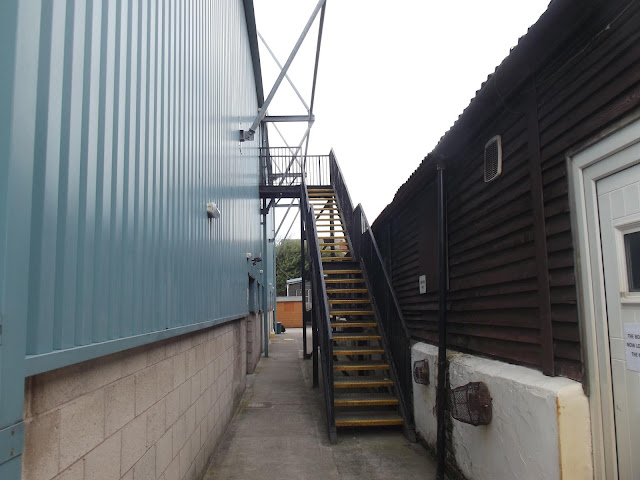