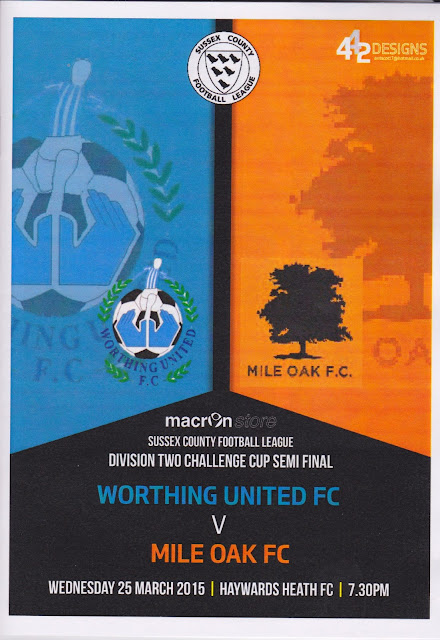 One of Haywards Heath's most famous bits of history is the Sussex County Lunatic Asylum which opened in 1859 on the site of what is now St Francis hospital, and indeed where one of the town's teams, St Francis Rangers play. Nowadays the town serves mainly as a base for workers who go off to the likes of Brighton and London to earn their money. Famous past and current residents include Leslie Ash, Lee Chapman, Natasha Bedingfield and former Eastenders actor Robert Kazinsky who played Sean Slater in the BBC soap. The venue for tonight's game was the home Sussex League side Haywards Heath Town who were currently mid-table in their league. They had played their first FA Cup match in 22 years this season, but sadly for them, it ended in an 11-0 defeat to Combined Counties League side Molesey. Their best period of success was post World War 2 when they were regularly Sussex League champions and even reached the 4th Qualifying Round of the FA Cup.

The first of tonight's semi-finalists were Worthing United. They had got to this semi-final with a 3-2 win at Steyning Town in the 1st Round of this competition, followed by another trip to Saltdean where they won 1-0. Despite being drawn as the home team in this semi-final tie they were forced to travel again as it was being played at a neutral venue. The club had last won this cup back in 1968 when they were known as Wigmore Athletic. They also won the Sussex League's John O'Hara League Challenge Cup in 1975. They had a great FA Cup run in 2006 as they reached the 3rd Qualifying Round before going out to Maidenhead United. They also reached the FA Vase 3rd Round in 1990. The Saturday prior to this game had seen them be crowned Sussex League Division 2 Champions, after being relegated from Division 1 last season, so a league and cup double was a distinct possibility. They would have to go a long way though to beat their 1974-75 season which saw them finish in 3rd place in the Sussex County League Division 1.

The other semi-finalist, Mile Oak had also yet to play a home game in this cup. They had won 6-4 at Midhurst & Easebourne in round one, before a 3-1 victory at strugglers Seaford United. The home side that night gained national fame due to their struggles as at one point they were the only team in the country to score less goals than Aston Villa, at least in the top 10 levels of English football anyway. Mile Oak had last won this cup in 2006, and it was just one of a number of local cup honours they have to their name. They have also reached the FA Cup 1st Qualifying Round and the FA Vase 2nd Round on 2 occasions. At the time of the game, they were sitting in 5th in the league and had a chance of promotion if the results fell for them. They had joined the Sussex County League in 1987 and had flitted around its various divisions. They had always found life tough at Division 1 level tough, however, with a best-ever finish of 16th in 1997. 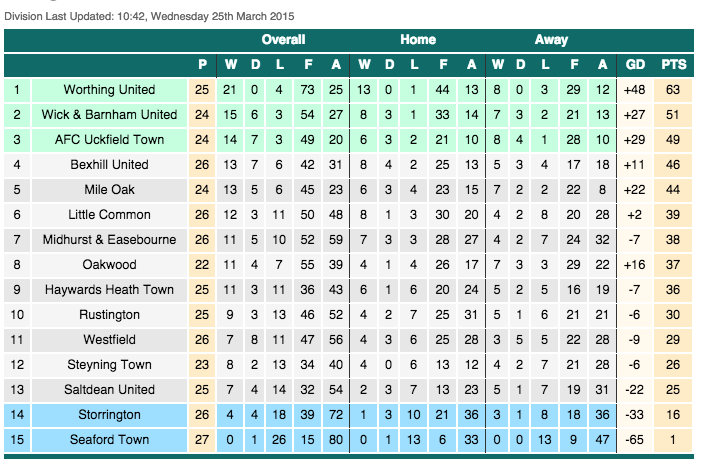 Initially, on my week off, I had been planning one of my usual trips up north - staying in a hotel and doing lots of games based in a certain area. But I knew that I would have just had the expense of my Scotland weekend, so I was having second thoughts. The deal was sealed when my mate Lewis procured me a young adult ticket for the Luton Town v Wycombe Wanderers game - and even better the guys I was giving a lift to would pay for my ticket between them, meaning it only cost me £8.40, plus the money for dinner and snacks. I had already dipped out of Norton United v Carlton Town on Monday, a game which the hosts had won 3-1 in a game that had been played at Newcastle Town FC, due to Norton United's dispute with their ground owners. I just didn't think that my wallet or body could take it after a weekend of overindulgence north of the border. I was sufficiently recovered in time for Tuesday's trip to Luton. I spent the morning catching up on my blog covering the trip to Scotland but got quite bored in the afternoon, so I was glad when it came to 3.30 and it was time to leave. I popped into Aylesbury to get a few bits that I needed before meeting the lads at 4.30. I had totally overestimated the level of the evening traffic as by 6PM we were parked up near Kenilworth Road. Myself and Anwar fancied a curry, so after a bit of looking around, we selected a place called Al-Bilal. It turned out to be excellent value and I got myself a Chicken Vindaloo, rice, salad and a drink for £6. It was delicious and very tasty as well as being a great value portion size. The Wycombe performance turned out to be as hot as my curry. We were leading within a couple of minutes, and although we were pegged back almost straight away, just as we were in the home game. But we soon shot into a 3-1 lead and although Luton pulled a goal back to make it 3-2 before half time, we survived a second-half onslaught to grab a precious win. The only gripe was a very silly road closure on the way home, which just happened to be a road that a decent chunk of the 8500 football crowd wanted to use. Luckily it didn't affect things too much and I got home without too many issues. 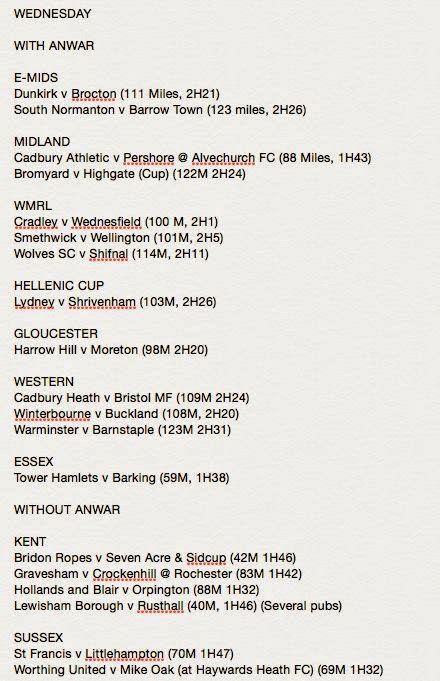 When I got home I was faced with the dilemma of where to go next. I already knew that I would not have Anwar with me, so I favoured something in the south where I wouldn't be going past his house. I quite fancied one with a few decent pubs nearby, and Lewisham Borough in the Kent Invicta League ticked all the boxes in that respect. Sadly though, their ground was one with a huge athletics track around it which spoilt the view somewhat. It would also mean a drive right through London with all it's traffic issues, and Bridon Ropes in the same league was dismissed for the same reason. My attention was then drawn to the Haywards Heath area, where there were 2 games going on. My initial choice was St Francis Rangers v Littlehampton Town, but then I saw there was a Sussex County League Division Challenge Cup Semi Final at the other ground in the town between Worthing United and Mile Oak. I do like a cup game and the ground had come highly recommended by fellow groundhopper Peter Miles. On the day of the game, I woke at around 10am, having had a good nights sleep. I chilled at home all day, catching up on some TV and doing some research for this blog before leaving at 4pm. It was a real pig of a journey around the M25 with several delays thanks to the poor design of the road. Eventually, though I got to Haywards Heath and after parking up and taking some pictures of the ground, I went for a walk to find a pub I had researched. By now it was 6pm and after just over a miles walk I found myself at the Stand Up Inn. Sadly time was too tight to order food but I did at least try a new cider - Sharps Orchard plus a retry of Orchard Pig Explorer. Both were very nice and I even got the second one for a price of a half as they couldn't quite make it a pint. From there I walked back to my car, getting a few bits from Morrisons for dinner only to discover a chippy near the ground. 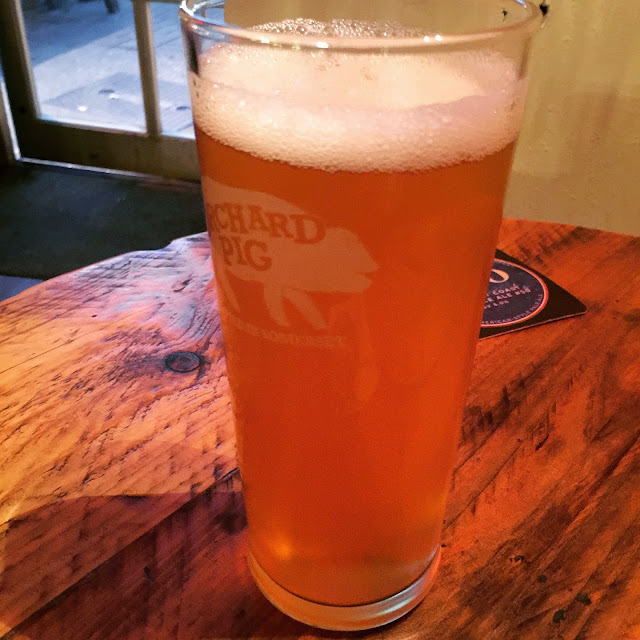 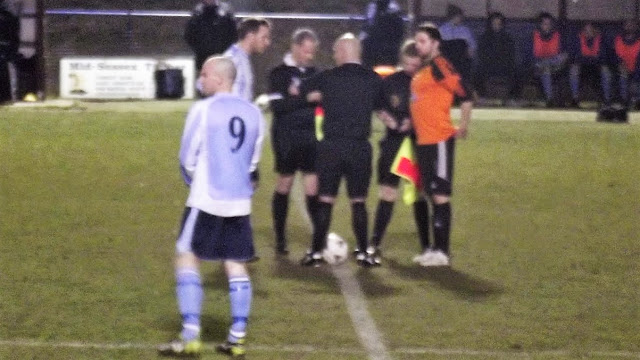 I paid my fiver to get in which included a very good programme and took my place along the side for the first half. Champions Worthing United were the better side and they took the lead on 22 minutes with a close-range finish. There was a moment of controversy when a Worthing United player stuck his head in opponents face but only got a yellow card. The resulting free-kick was wasted and it was a first half of not too many chances. At half time I went and got some chips and was back in time for the second period. Mile Oak started the strongest and they got their reward via an equaliser on 55 minutes. The keeper really should have done better but he fumbled a cross into his own net. 2 minutes later, Worthing had the lead back and it was another case where the keeper should have prevented the shot going through him. The same keeper was booked a few minutes later as he got into a scuffle with a Worthing forward but he accusation of 'he kicked me in the head' were a bit wide of the mark. Both players were booked for their trouble as the game came to life. Sadly there were no further goals despite there being chances for both sides. That result meant that Worthing United will now face Wick & Barnham on May Day Bank Holiday in the Final. From then on it was a nice hassle free drive home with no traffic. I was back home by 10.40 and it had been a decent penultimate day to my week off. I spent some time typing my blog and watching TV before going to sleep at around half past midnight. 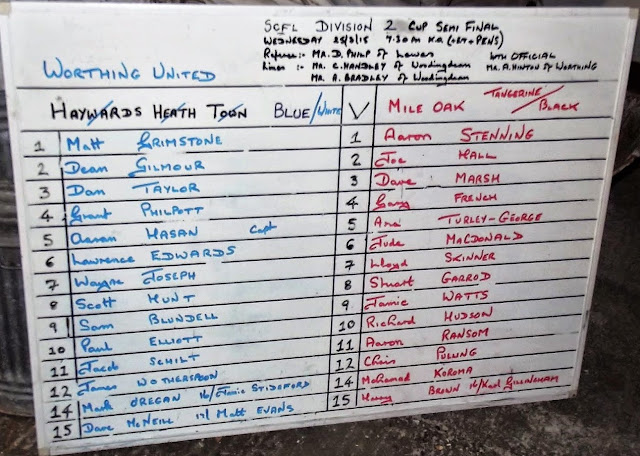 
HANBURY PARK is one of the great traditional non-league grounds. Pride of place goes to the big main stand which holds around 500 fans. There is a small area of cover behind one goal but apart from that it is open with a combination of hard standing and grass banking. There is a tea bar and clubhouse at the ground as well as a choice of places nearby. I’d recommend the pleasant mile walk through a park and quiet roads to Lindfield where you will find the excellent Stand Up Inn with a good range of real ales and ciders as well as Thai Food. 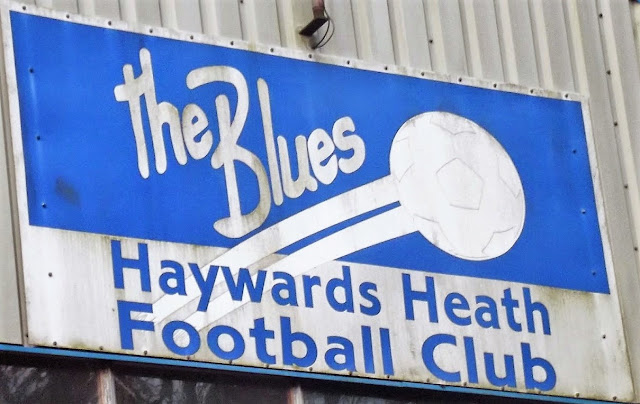 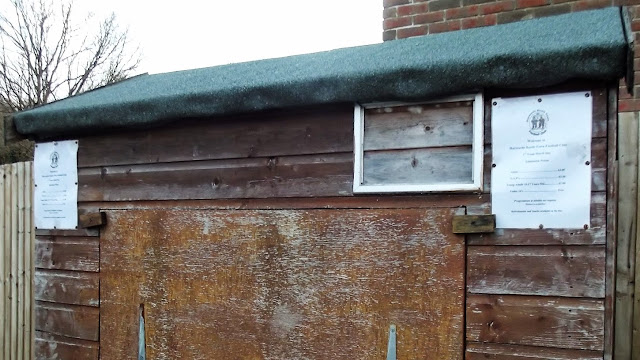 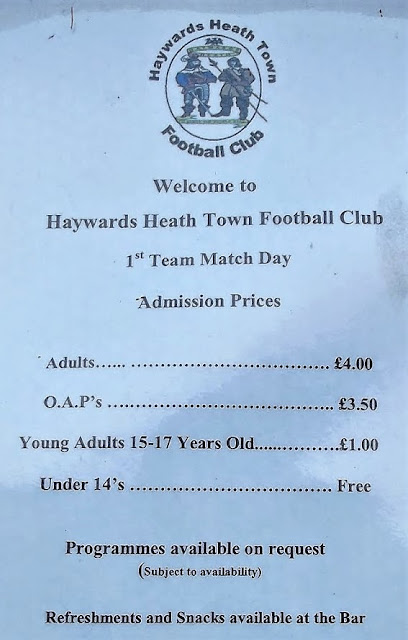 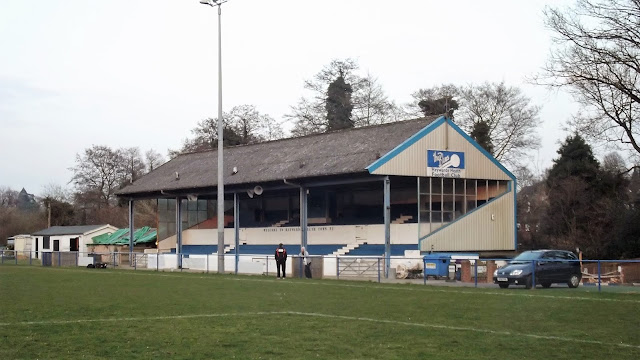 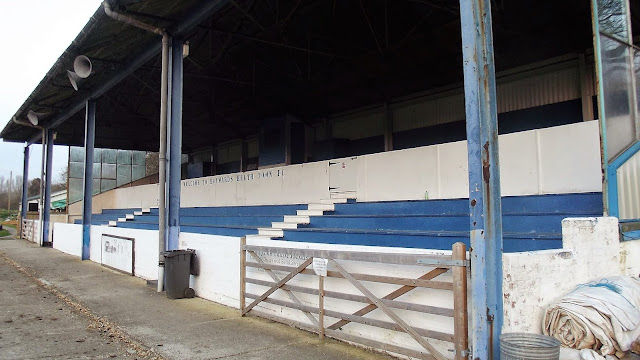 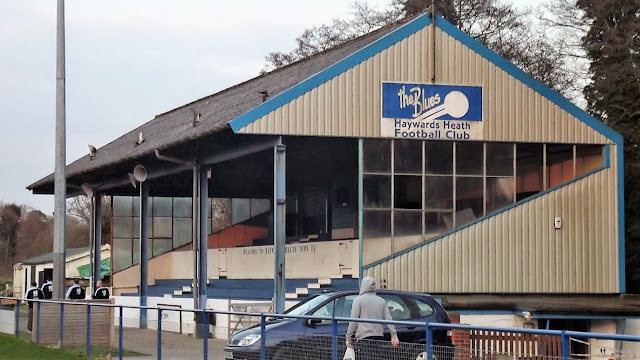 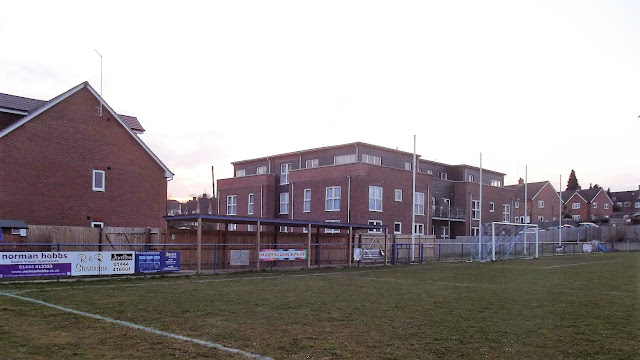 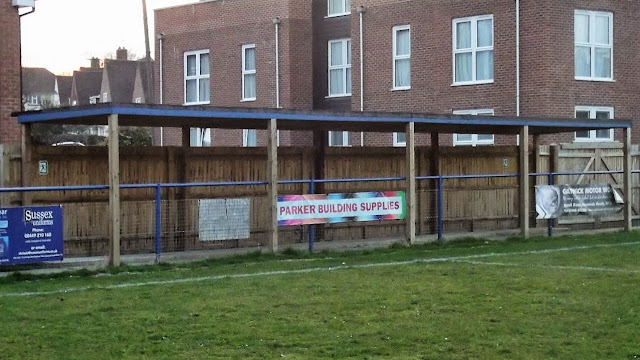 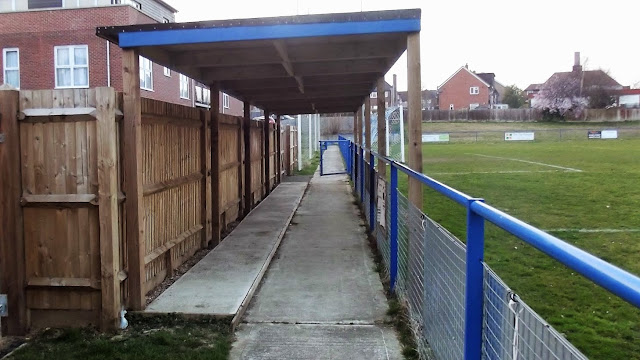 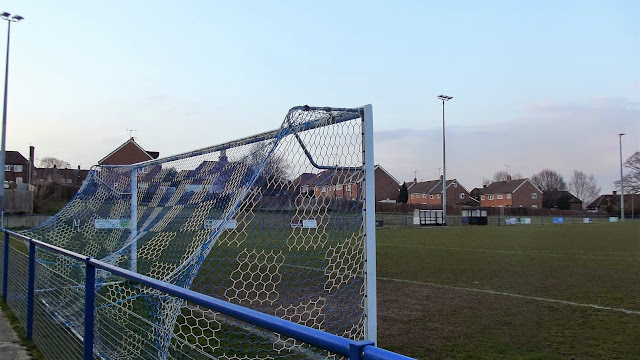 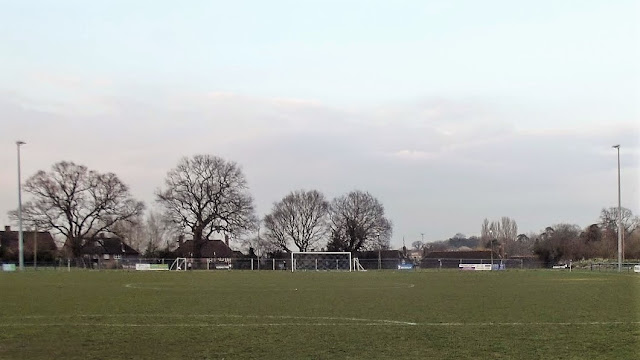