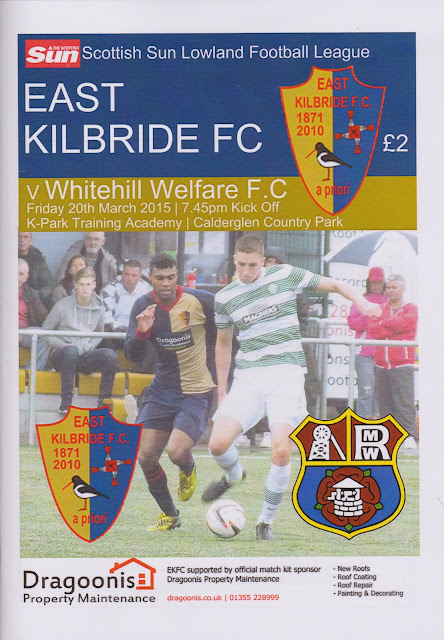 EAST KILBRIDE FC was originally formed in 1871, making them one of Scotland's oldest clubs before they folded. However, the modern-day incarnation came about in 2010 when 2 local clubs - Stewartfield and Jackton Boys Club. They have nearly 30 teams covering a range of ages and genders and are really into the community vibe. They were launched officially by ex Celtic man John Hartson and his Rangers counterpart Josh Brown. They won the SFA South Region Challenge Cup last season whilst finishing mid-table. This season they entered the Scottish Cup for the first time and are currently flying high, sitting in 3rd place at the start of the game. 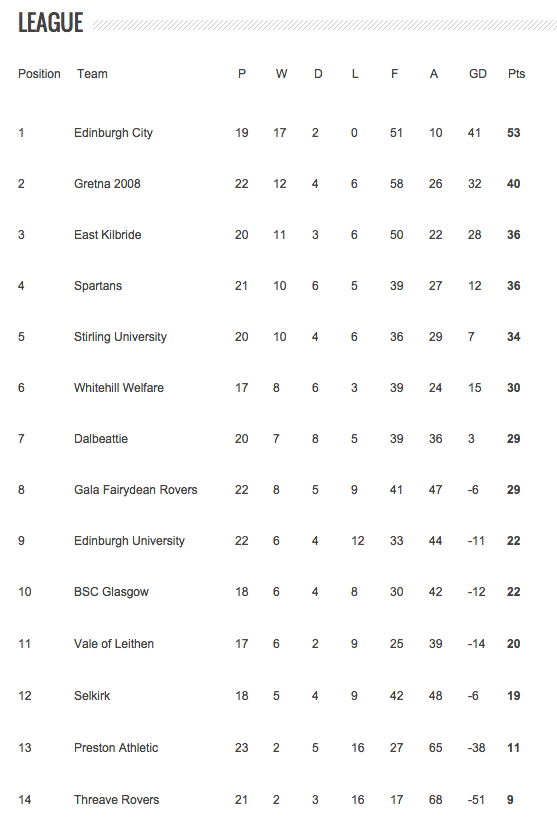 I'd had this Lowland League hop booked up for a while, and was really looking forward to it. Admittedly not as much as the NCEL Hop in April, but this would hopefully be a ball ache free trip. I  would be going up on the coach which would be a bargain £80 for my 3 days travel. The games worked out at under £7 including programme, another good deal. The only thing that I felt was expensive was the hotel, which came in at £54 per night as I wanted a single. I could have shared with someone for £37 a night, but there are a fair few eccentrics on these groundhops and I didn't want to risk sharing with some dodgy hairy arsed geezer. Chances are I'd have one of the decent majority, but when I worked it out, it added around a fiver to each game, a price that I was happy to pay. As it turned out, the room was good value compared to others when I checked after the destination was confirmed. It was gonna be a nice 4 star anyway, and included a 'Full Scottish Breakfast' and I was eagerly awaiting square sausages and a black pudding variant. 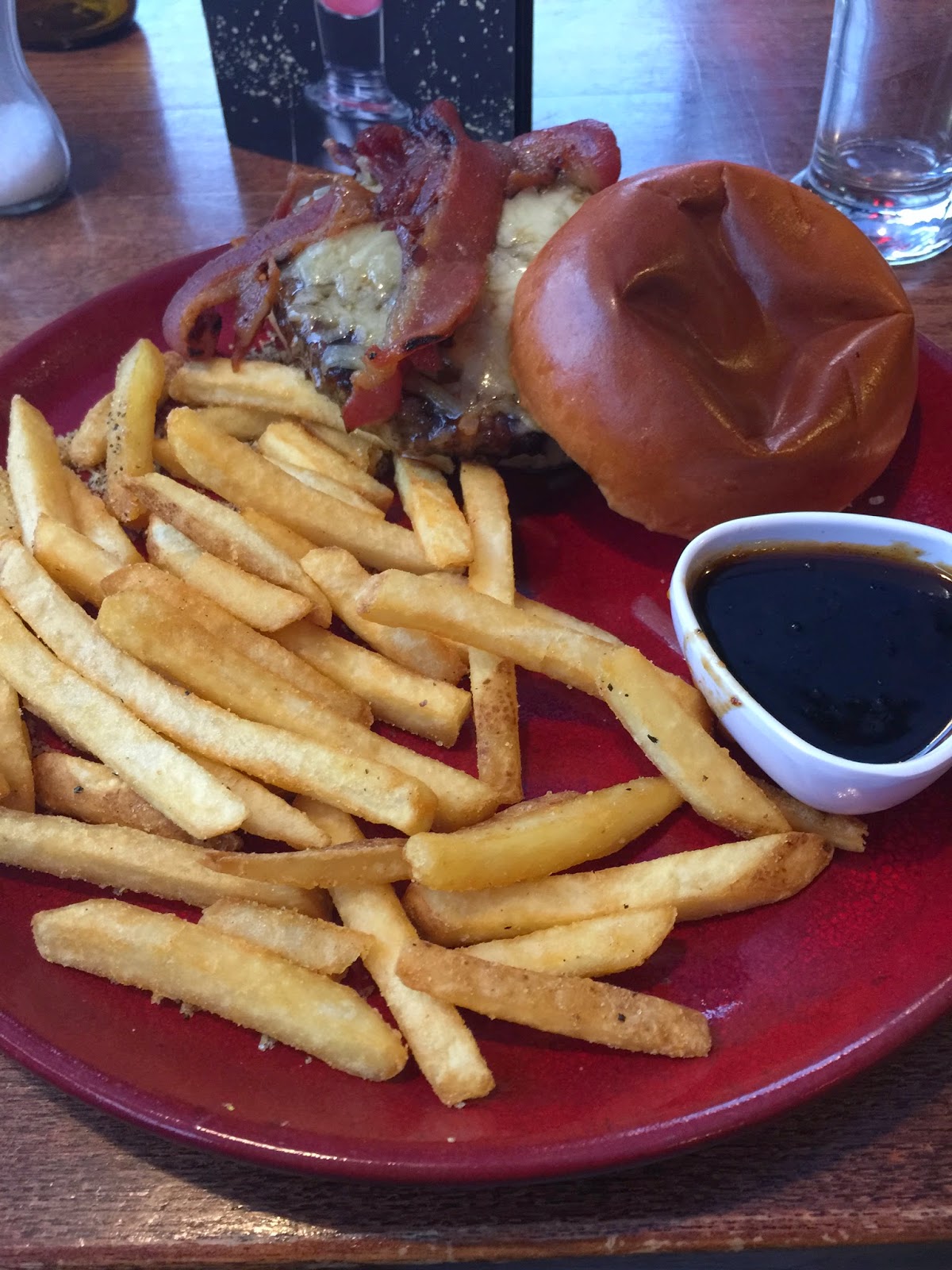 In the week leading up to the game, I was having a massive load of hassle with my car. That was after an expensive couple of weeks which left me over £300 down. for tyres and brakes. While it was in the garage they spotted that the gearbox was not quite right, and it needed a drive shaft replacing. A nice simple job that would prevent me having to fork out for a new gearbox and would have kept it running reliably you would have thought. Wrong! 2 days running I'd had to leave my car in the garage, and the dunderheads at the parts company had sent the wrong parts 4 times. It was highly frustrating as dealings with my local garage are usually hassle free, but you can't legislate for a supplier continually getting it wrong. Anyway, all this meant that I had to rely on my parents for a lift to the Wycombe game, a match that we drew 2-2 with Accrington Stanley. The result was disappointing on paper, but we played really well and the game was great to watch. It was tiring and saddle sore cycling to work the next morning, but I did it thinking all my problems would be solved that afternoon. As it turned out they weren't due to the aforementioned supplier, but they did at least put the old parts back together on the understanding that it was to be used for work trips only as they couldn't guarantee the reliability over anything but short distances. So that meant that my planned trip to Wokingham & Emmbrook v Finchampstead fell by the wayside, which was the most annoying. It meant that my planned 2 days abstaining from booze were cut short as I would be going out for a meal with my folks before once more making my way to Adams Park for the fans forum. It was a good meal, and a few drinks too. 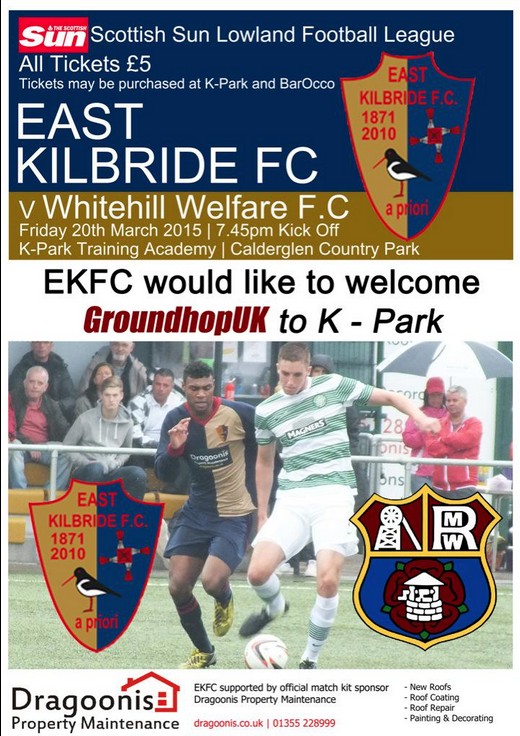 At the forum we learned a fair few things, including that the pitch had been so badly damaged by Wasps being there (that's the rugby team, not the insect by the way) that only certain areas of the pitch could be used for the pre-match warm-ups, and that that was the reason why they had stopped the half time penalty shoot outs for the kids teams. Perhaps with all my car issues, it was a blessing in disguise that my friend and fellow hopper as well as one of the organisers Laurence had offered to give me a lift from the Wycombe Six cinema, as it certainly solved the problem of getting over to Uxbridge. I’d planned to park in a side steet for free to save money on parking, but would have ended up having to get the bus over and a taxi back as I was leaving my car at the garage over the weekend in the vain hope that they might actually get hold of the right part and enable me to go to Newcastle Town FC to see Norton United play Carlton Town. I also had Luton Town v Wycombe planned in for the Tuesday and was undecided on what I would do on the Wednesday of my week off. 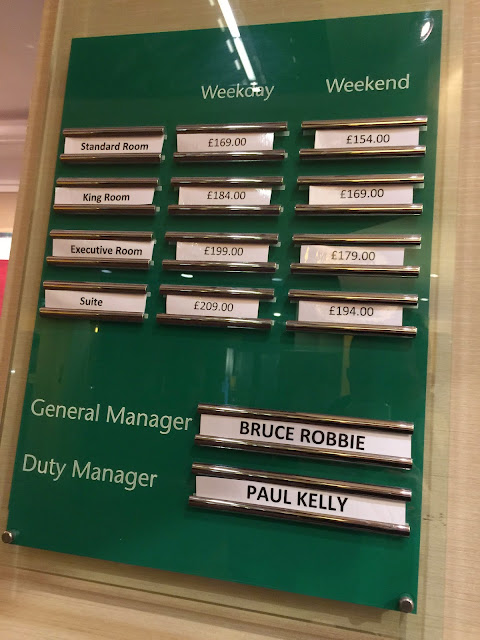 On the day of the game I awoke early at around 5am, my body clock was obviously expecting me to get up for work as per usual. I killed time by watching TV and going on the internet before having a bath, getting my things together and leaving at 7.15. My Mum kindly gave me a lift and waited for me until Laurence arrived at 8.15. We had a good journey down, with it taking half an hour to get to Hillingdon Station. The coach was there waiting for us, with all but one hopper there, and he arrived in time for the 9am departure.  The coach made good time with a brief break at Donnington as we were well ahead of our last scheduled pick up at Long Eaton. We hit traffic around Sandbach due to them messing about doing roadworks, but thankfully it was only a brief delay. We stopped at Knutsford services so the driver could have a break. To be honest I just wanted to get on with travelling but I killed time by looking at magazines in WH Smith. On the journey up I played FM Handheld 2013 on my iPad. I really should get a newer version but I bought this one ages ago and it is still great fun to play. I was doing very well with Tonbridge Angels. We were informed on the coach that there was a buffet at the ground - all you can eat for £7, with some nice sounding Scottish things. I was unsure at first as I was still full, but as the journey wore on, I got more hungry and decided I was gonna go for it. The final part of the journey took longer than expected and we didn't get to our hotel until 6.30. With loads of people dawdling and faffing about we didn't leave the hotel until 7. Literally, I had time to drop my bags and go, the hotel looked very nice and the prices quoted were starting at £154 a night, so the people on the groundhop had got a great deal. It didn't take us long to get to the ground, with us arriving at 7.20. I got myself a scarf for a fiver to add to my collection.  Due to the short amount of time before kick off, I decided against the buffet. I still had time for a couple of pints though, one Strongbow and one Strongbow Dark Fruits. They were good value at £3 a pint. I got a burger, chips and gravy for my dinner before going into the ground. 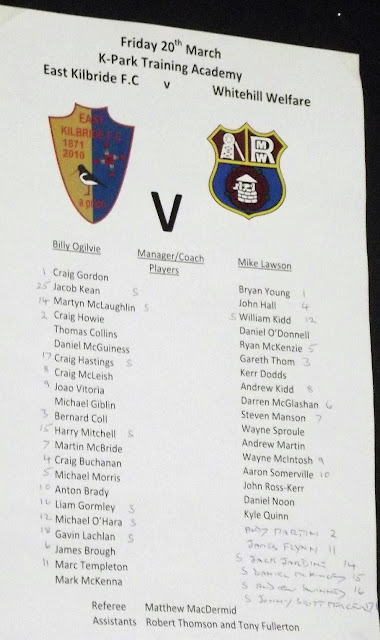 It was not the best of games. Though there was some nice passing football, goal attempts were at a premium. East Kilbride won it, McGleish scoring around halfway through the second half to give his side the win. There was an attendance of 491, just short of the 500 capacity. In reality, it could hold a lot more, but due to health and safety busybodies, they cannot let more than the specified amount in. After the game, we got the coach for the short trip back to my hotel. We got back about 10.10 and me being me headed straight off to the bar. I was pretty tired by then so I only had the one pint. I had just discovered the delights of an app called Untappd. It allows you to record all the beers and ciders that you have had and rate them. Seen as I have been exceptionally lazy at adding all the beverages I have had to my list, this app is perfect for doing it as I drink, rather than my usual trick of taking a photo of the beer clip and thinking that I will do it later. I went to sleep at about 11.30 after watching a bit of TV in my room. 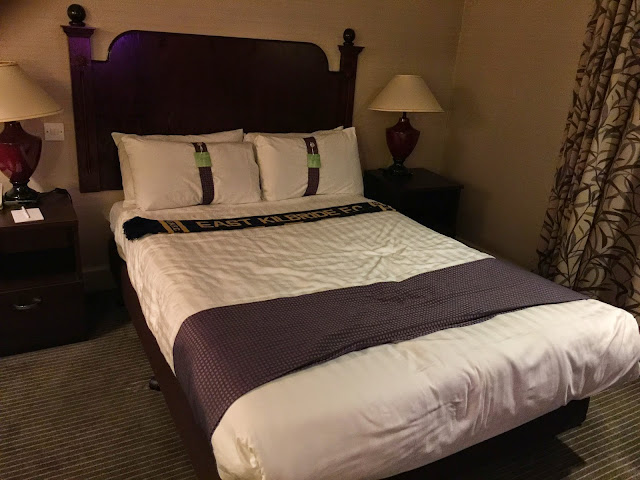 K-PARK is one of the smallest grounds I have been to with regards to capacity, with it holding just 500 capacity, with all the accommodation on one side. To be honest it could hold around double that if all the standing space was used too. The people at the club were really friendly and welcoming and it was a pleasure to visit them as my first Scottish Ground, even if it wasn't a classic ground. They sold a wide range of merchandise to suit all budgets and the bar was very good too. There was an excellent looking buffet , but sadly I didn't have time to use it. The food places in and around the ground were pretty average, with nothing really Scottish for sale, just the usual stuff that you get at football grounds up and down England. The 3G pitch is a real boon and makes the club well worth a visit. 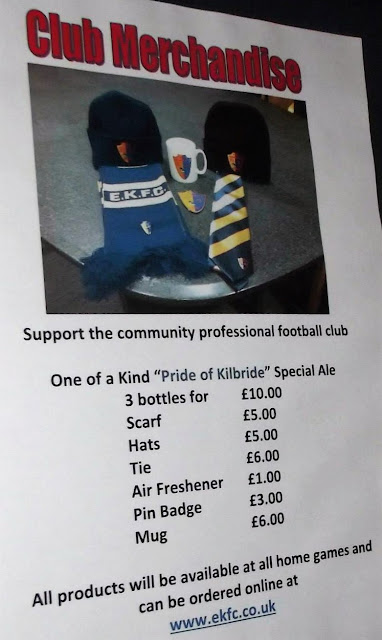 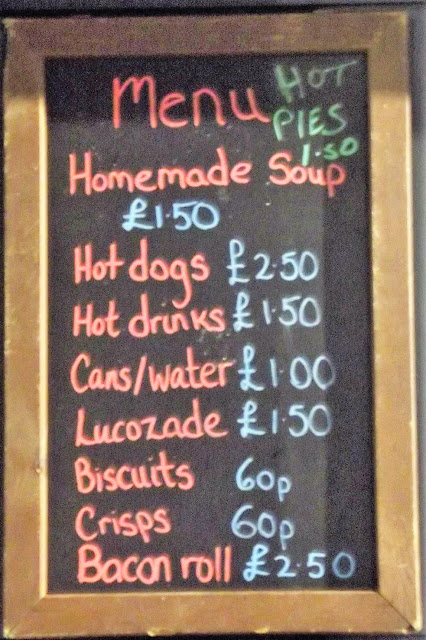 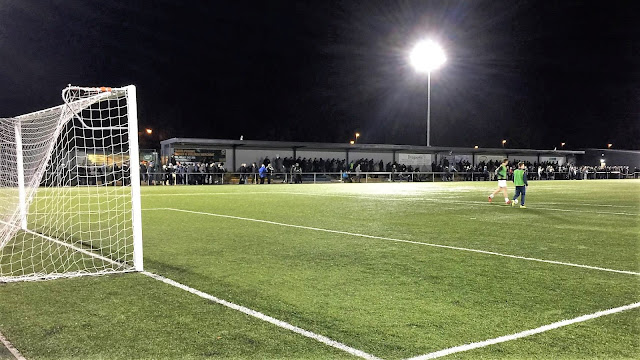 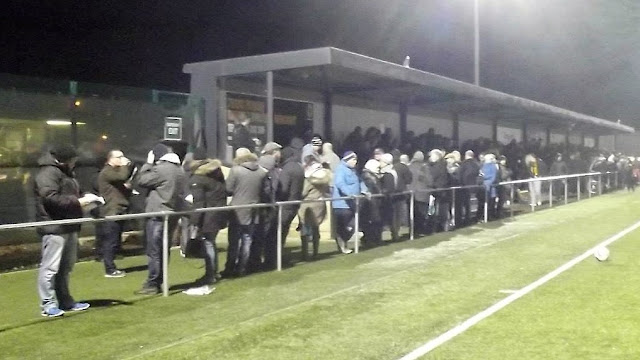 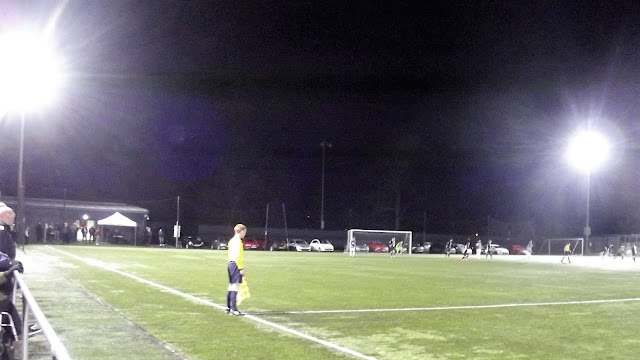 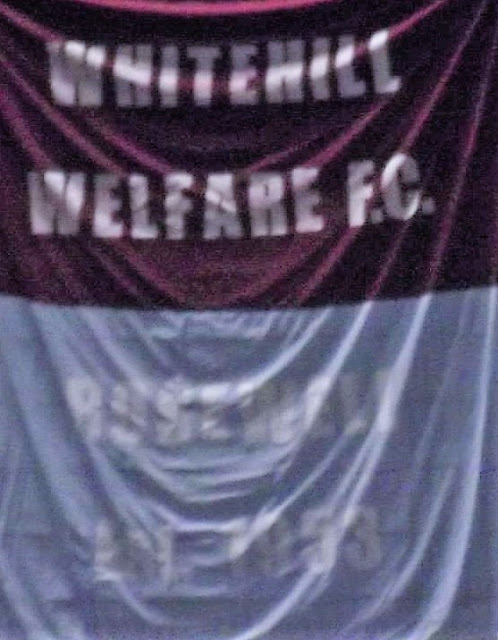