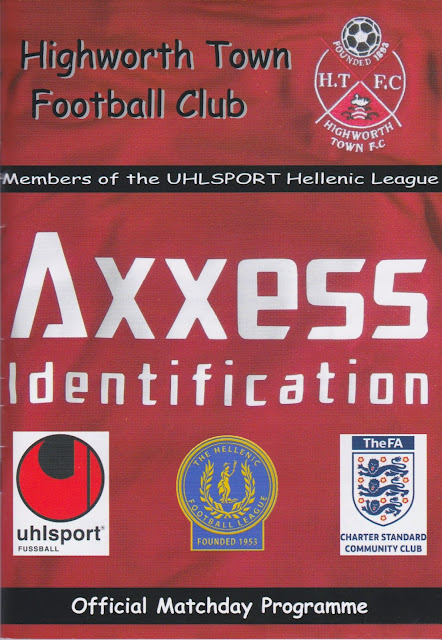 HIGHWORTH TOWN had recently been involved in one of the most special moments in their history, as they were just one step from Wembley. They players were a huge credit to the club, with it being their best progression in the FA Vase, as they reached the semi final. Sadly, North Shields, of the very strong Northern League stood in their way and were 3-0 victors over 2 legs. They had to do some work to get there, starting in the 2nd Qualifying Round back in early autumn. But wins over Hartley Wintney, Windsor, Bridport, Blackfield & Langley, Tunbridge Wells and Tadcaster Albion had given them an amazing adventure, with the 2nd Round being their previous best. The club also had a great run in the FA Cup in 2003/04 as they reached the 3rd Qualifying Round. Lymington & New Milton beat them this time and had they gone through and beaten Salisbury City in the next round as well, they would have faced off against former Premier League giants Sheffield Wednesday. They have a large range of other cup honours to their name, most recently the Hellenic League Challenge Cup in 2012.

They were formed in 1894 but it took them another 90 years to join the Hellenic League after playing in local leagues for much of their history. Initially joining at Division 1 level they were promoted in 3rd place behind Carterton Town and Pegasus Juniors at the end of the 1993/94 season. Finishing as runners up behind Banbury United in 2000, they were Champions 5 years later as they beat Didcot Town to the title by a single point. They finished in 7th place last season and although they were 2 places below in 9th at the start of the game, they did at least have lots of games in hand on the teams around them, owing to their FA Vase run. Opponents Thame United were just above them in 6th place, while the town of Highworth was the birthplace of model Melinda Messenger and actress Helen Shapiro. 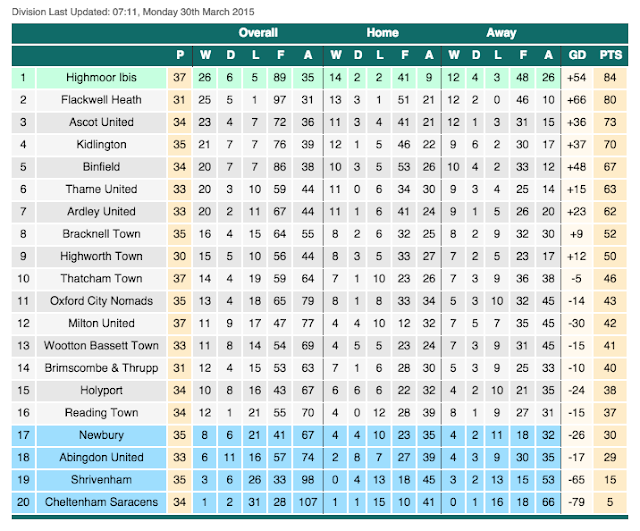 Once again it was time for myself and Anwar to do a groundhop, our first in 2 weeks. I presented Anwar with a list of my favourites on Tuesday and out of the limited selection he selected Highworth Town as his first choice. This suited me as I was hoping to complete the Hellenic Premier and with trips pencilled in to Brinscombe & Thrupp on Thursday and Milton United in a couple of weeks for the North Berkshire League Cup Final, I would soon have the full set. Since the last time I wrote on here, it had been generally good news. The speeding ticket I got recently has been quashed after Essex Police admitted they got it wrong. It was great news on what had been a very expensive month for me. Football had been kind too - I'd had a nice cheap night at Holmer Green on Thursday at Holmer Green as Flackwell Heath gained a 2-0 victory in the Wycombe Senior Cup semi-final. Even better was on Saturday as I had a great day in London, meeting some Grimsby fans that I knew as their side won 2-0 at Welling. To cap it all, Wycombe won across the capital in Dagenham in a scrappy game to continue their great season and edge ever closer to possible promotion. 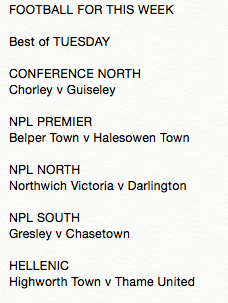 On the day of the game, I was off work as per usual for a Tuesday. I woke up at 9 and had breakfast before going for a near 5-mile jog. I had recently started again after stopping last July due to a dodgy ankle and it felt good to be out again after putting back on all the weight (and a little bit more) that I lost from doing it last year. While I was out I checked at my local garage for the price for a new gearbox for my car as my current one is on it's way out. They still didn't have a definitive price, but having looked online I was quoted £350 plus fitting for a secondhand one. With a replacement cam belt due soon and the MOT and Service coming up at the back end of May, I think now might be the time for a change, after my current car has served me well for nearly 5 years and 75,000 miles. After having some lunch and spending time relaxing at home, I left for Anwar's at 3.30, an hour before we were due to meet as I wanted to go into Aylesbury to get some stuff for tonights match amongst other things. I went and got my stuff from B&M Bargains in Aylesbury before meeting Anwar at 4.30 as arranged. We had a good journey to Highworth, getting there just after 6pm, though there was some confusion finding the car park as it wasn't very well signposted. We ended up initially parking in the Youth team complex before going off to get some pizza for dinner. It was very nice, though I wish I'd gone for a 12 inch as opposed to a 9 inch one. After that, we popped into the Co-op where I got some grapes and Marmite rice cakes.  I then moved the car to the proper car park. They were offering reduced price admission of a fiver which was a couple of quid cheaper than usual plus a good programme for a quid so I helped them out by having a nice pint of West Country Gold cider for £2.70. We sat in the bar until kick off as it was still quite chilly outside, mainly because of strong winds. 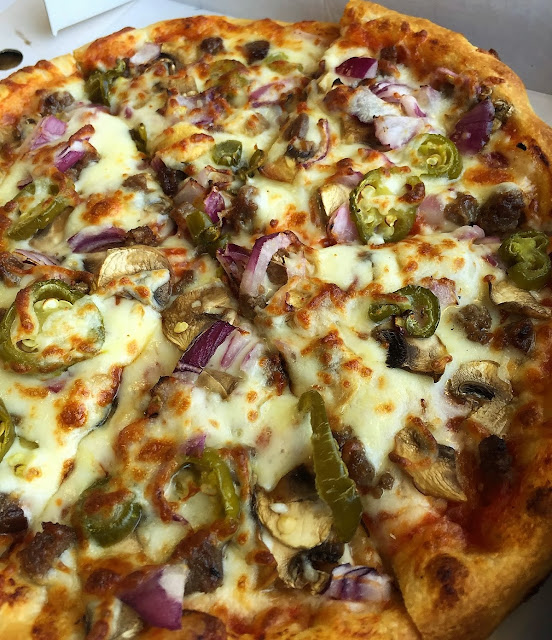 The game started off with Thame well in control but it was Highworth Town who scored as a result of their first chance. The bar was hit with a great shot and in the scramble that followed the referee saw a push and gave a penalty. The spot kick was duly dispatched to give the home side the lead after 20 minutes. From then on they had much the better of the game and were unfortunate to have just the one goal at the break. It was a cold night so we went to the bar at half time to warm up and watch the football where Italy were beating England 1-0 I'm some pointless friendly. Highworth doubled their lead just after the restart as they kept the ball on the floor to avoid the strong wind, something that Thame were not so adept at doing. It was 3-0 on 70 minutes. The visiting keeper continually failed to come for crosses and he was punished as an attacking player nipped in for a third. It was a disappointing night for former Wycombe player Mark West whose Thame side gave up after a positive start. The game finished quite late, at 9.50, as the referee, under the watchful eye of a local assessor made sure he played every last minute. It was quite a simple trip back with me dropping Anwar off within an hour and getting home myself 20 minutes later. It was a busy and hectic night after the game. My car after years of faithful service was on it's way out, especially the gearbox. 72000 miles later and it was time to make a change. I was up until well after midnight arranging a test drive of a new car and all being well I would have something new in place, before being lumbered of a bill of well over a grand for the gearbox and other stuff. 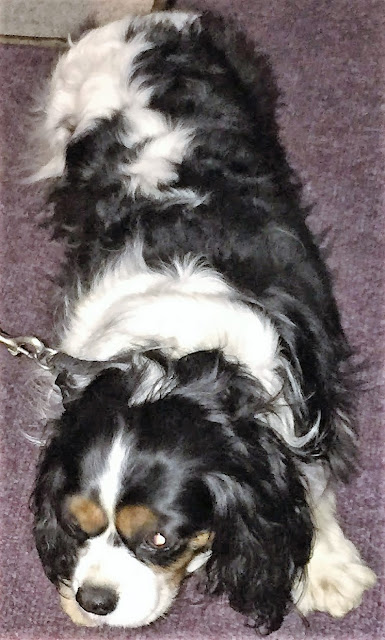 THE ELMS is your typical step 5 ground. The stands as so common these days are metal ones with seating for around 150 and standing for another 100. It's in a nice park area and the far side is out of use for fans due to there being a cricket pitch. The tea bar is very basic but the clubhouse shows TV football and has an excellent range of drinks. 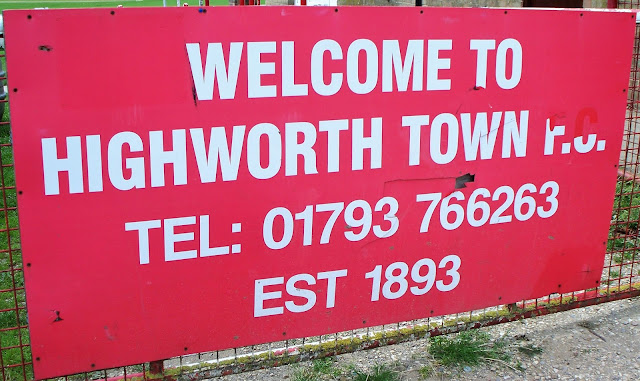 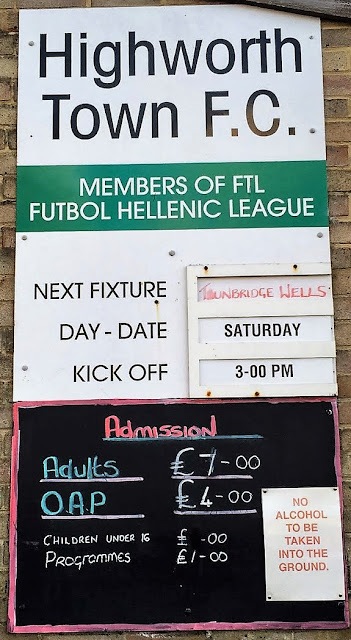 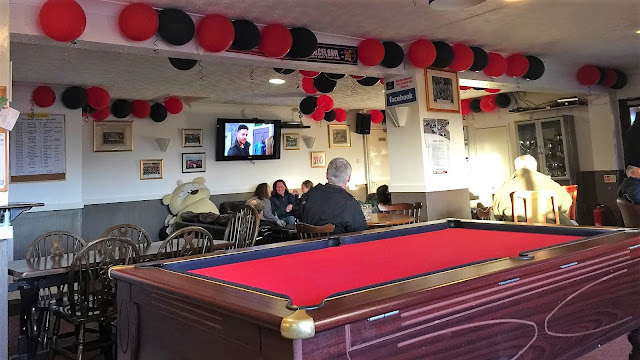 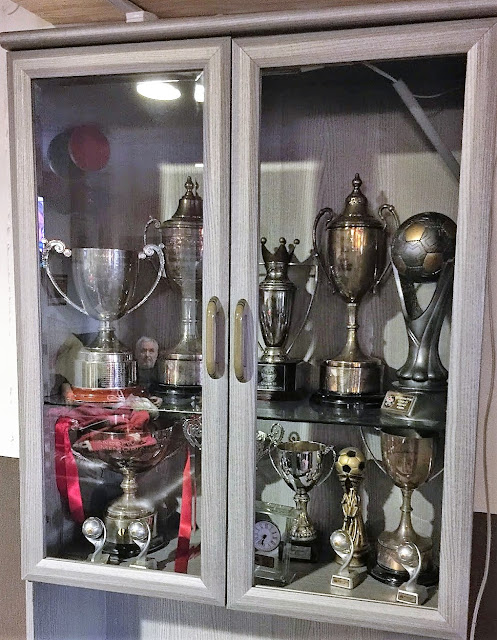 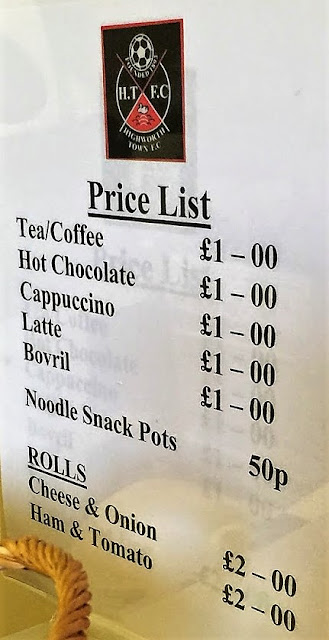 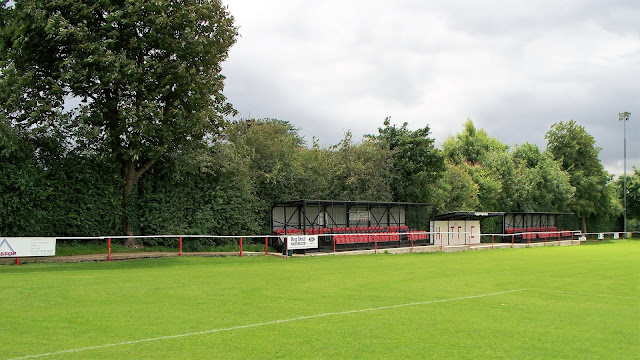 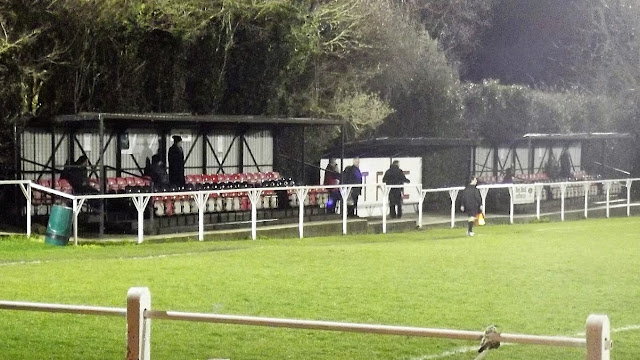 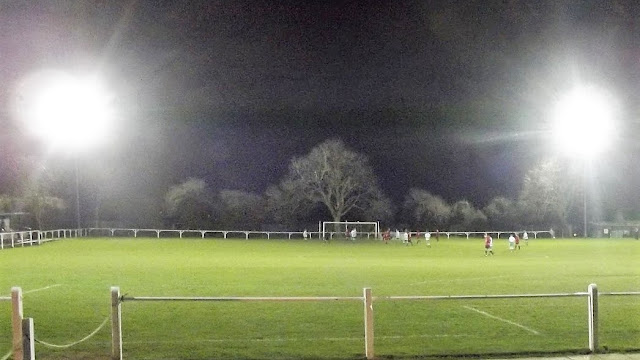