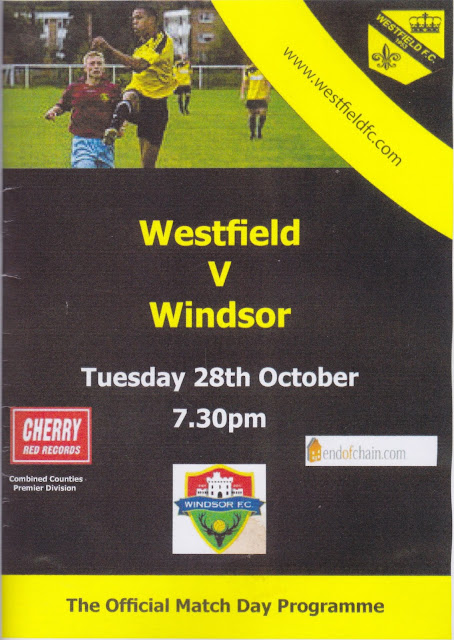 Westfield FC was formed in 1953. The club played in the Woking and Surrey Leagues up until 1978. That year they became founder members of the Combined Counties League (for its inaugural year it was called the 'Home Counties League') They have never suffered a relegation due to on the pitch matters since joining the league, though they were demoted in 2006 due to ground grading issues. It took until 2013 to be promoted back and have the ground in place, but last season, their first season back, they finished an excellent 4th, just one place short of their best ever finish of 3rd back in the early 80's. The league was a direct follow on of the Surrey Senior League and they were also Champions of that for 2 years running, in 1973 and 1974. They had generally been successful, but at the time of the game were struggling down in 19th place.

In the FA Cup they had not had much success, though last season they reached the 1st Qualifying Round before going out to Southern League D1 Central side Aylesbury United. The FA Vase was just as elusive, but they did have a good run to the 4th round back in the 2000-01 season when they lost out to Arlesey Town, though they did beat Lewes along the way. They had won the Surrey Senior League Cup twice in the early 70's, plus the Surrey Junior Cup back in 1955. 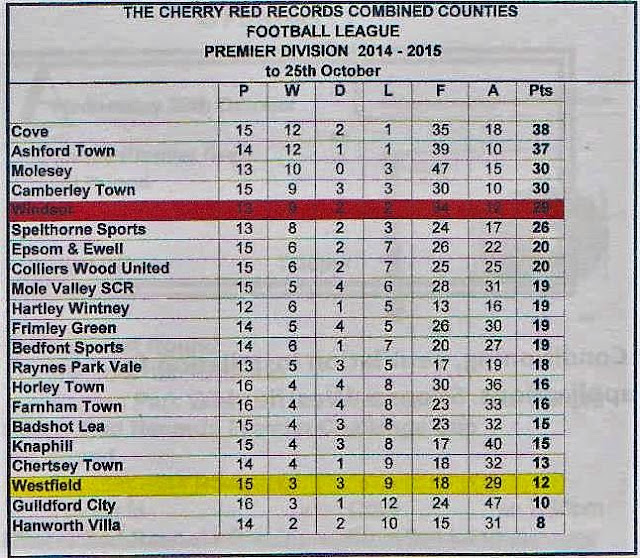 After a bumper week of football last week, but no game on Friday as I was so busy catching up with things that had gone on whilst I was away, I was looking forward to getting to a game on this Tuesday. I was hoping it would be with my regular groundhopping partner, Anwar. In the absence of anything really special, I looked for the closest game to me, at a ground I had not been to previously of course. It turned out to be Westfield v Windsor in the Combined Counties League. I was pleased about this - the CCL being a league that I was over halfway to completing and having been to a fair few Windsor games in the past when ex Wycombe players Dennis Greene and Keith Scott were in charge. I had also been to a Westfield 'home' game before, but it was played at nearby Woking FC due to Westfield's very basic ground back then. In fact, I'm not even sure if they had the hard standing back then as I went back to get more pictures a few years later, but since then there had been massive improvements so I was looking forward to going back and seeing what had happened to it. On the day of the game, it was quite busy for me. I had to start this blog, and I was also waiting in for my new phone to be delivered, as my parents were out. Later on in the day after lunch, I had a couple of bits of casual work to do and these took a couple of hours to complete. For the rest of the afternoon, I just caught up on a few bits, but as of dinner time, still no phone. 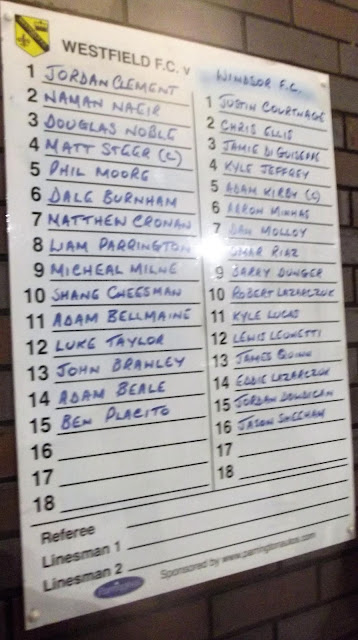 After a delicious home cooked curry and getting my things together, I left at 5.45, allowing an extra hour for the ever useless M25. At first I was frustrated by cars doing way below the speed limit on the way to the motorway, then when I got to the M25 there was around 8 miles of crawling traffic thanks to some bozo stopping his van in the middle of the motorway, rather than pulling over to the hard shoulder like any sensible person would do. At first, the prognosis on my sat Nav looked grim, with me lucky to make kick off, what with all the delay. In the end, I got just outside the ground at just before 7.10. I tried to go in the entrance that my Sat Nav told me, but someone had put bollards at the end of the lane, and also some to stop you cutting across the pathway and getting in that way. In the end, I wasn't sure where the new entrance was, so I parked in the next side street and walked it. After walking to the ground I was met at the gate by a friendly man who charged me a very reasonable £6 including programme. This is spot on in my mind, I reckon a fiver in for this step, plus the programme was well worth a quid, maybe £1.50. I caught up on my facebook and got some pictures of the ground before going and watching the game from the balcony. 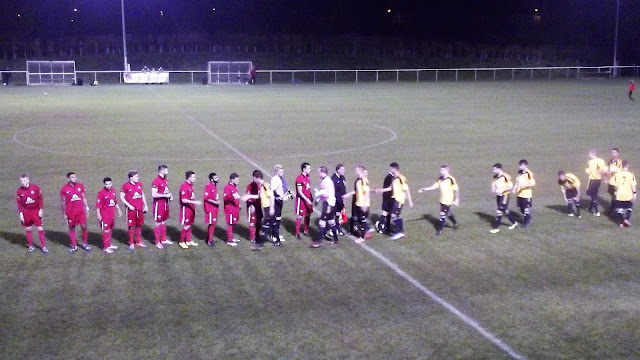 The first half was pretty decent without being spectacular. It was Windsor asking all the questions with Westfield defending very deep and relying on catching Windsor on the break. They did soak up the pressure well though and the Westfield keeper was never really tested. Windsor took the lead around 10 minutes into the second half when sloppy defending allowed them to score from close range. But it was a lot more equal in terms of play and the goal seemed to spur Westfield into action. They got their equaliser just after the hour, a great cross allowed Shane Cheeseman loop a brilliant header over the keeper. From then on it was the home side in the ascendancy but it was Windsor who took the lead on 78 minutes. Robert Lazarczuk who had played really well as a deep lying playmaker put a great ball through to split the Westfield defence and it was put away in the scramble that followed to give the visitors a 2-1 lead. I thought he was the best player on the pitch, but straight away he was subbed off. Westfield tried to get back into it, but they were a bit hurried going forward and lack of composure meant their efforts came to nothing. After the game, I made my way home, leaving Woking at 9.30. The roads were nice and clear and I was back at 10.10. I checked my Facebook and typed some more of this blog before watching TV in bed, going to sleep around midnight. Next up for me will be Southam v Cleethorpes Town in the FA Vase on Saturday 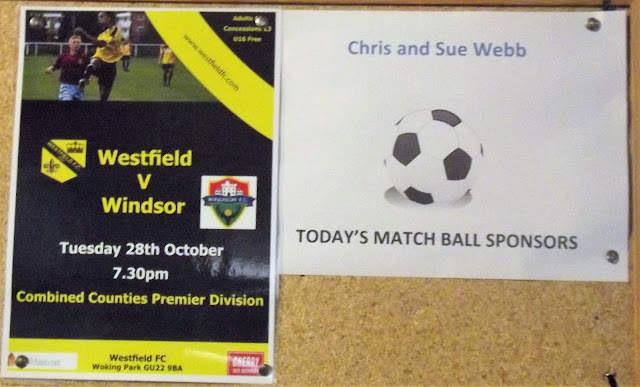 WOKING PARK has been transformed into a smart and modern venue which has not fallen into the trap of using the metal stands that you see at so many new builds these days. Pride of place goes to the main building which houses the dressing rooms and a smart modern bar which has Sky TV and also houses the tea bar. I didn't see a club shop but there were plenty of free programmes for you to take from the bar, and make. donation if you wish. From outside the bar, you could gain a great view from the balcony and get an elevated take on the action. Below is around 100 seats, with another 77 seats behind the goal. This stand got much publicity when the club tweeted about it, being picked up by various media outlets and someone from the club was invited onto TalkSPORT radio to talk about it. The rest of the ground is open flat standing, with the far side being out of bounds to fans and housing the dugouts. I'm not sure what is around the ground, but don't remember much around Woking's ground when I went, with the town about 20 minutes walk away. 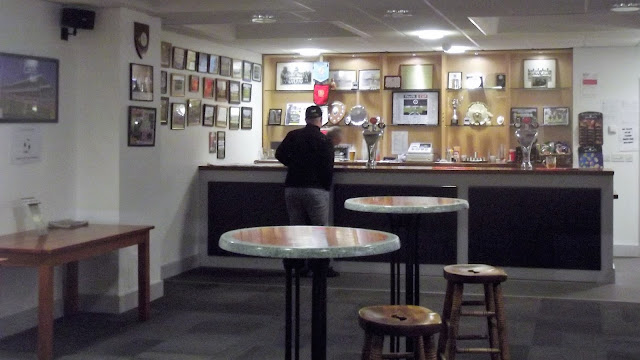 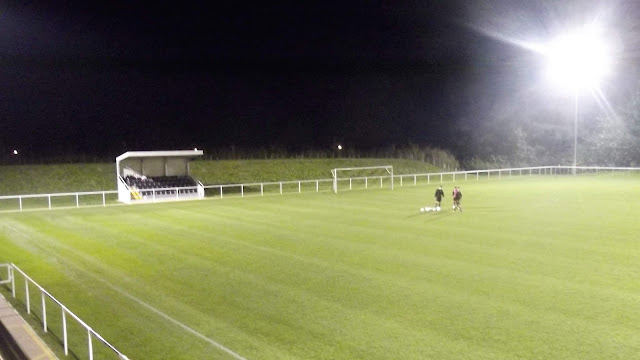 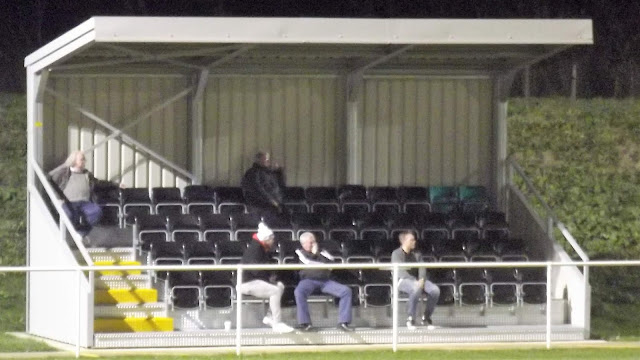 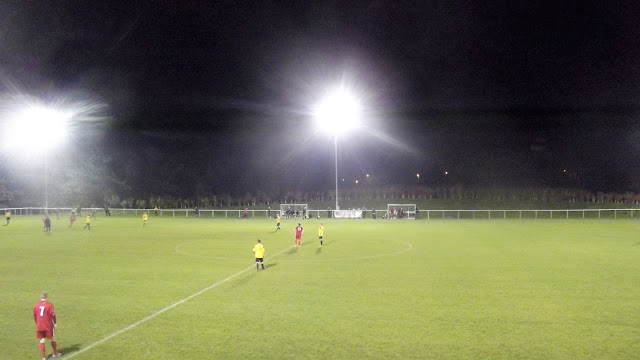 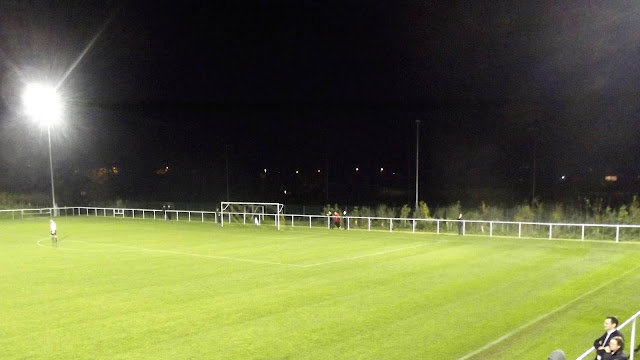 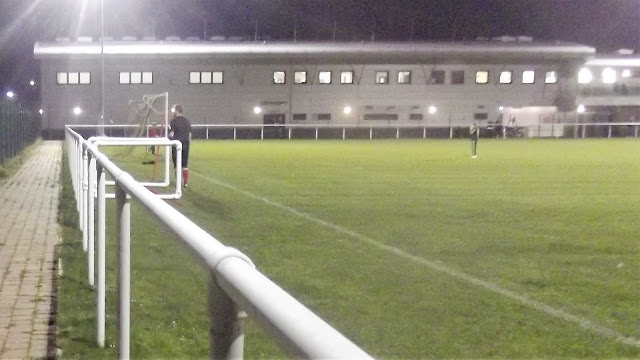 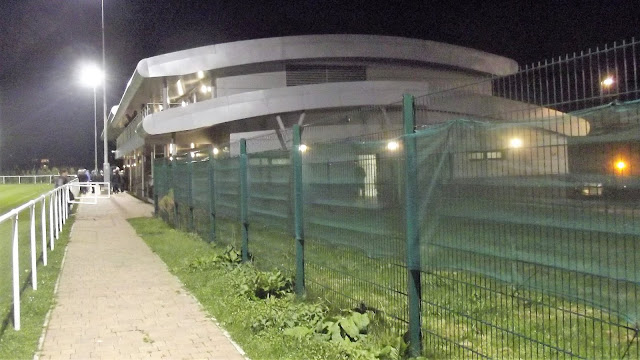 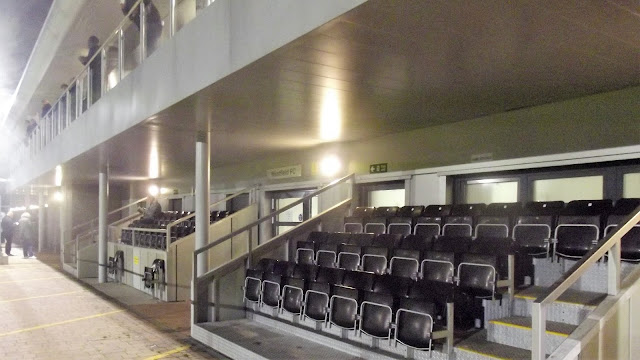