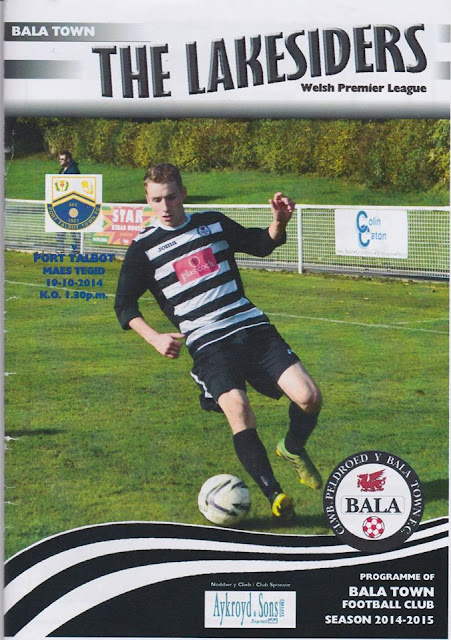 Bala Town were in 4th place after the game, not far off 2nd, but a long way away from the usual runaway leaders TNS. They had been regular qualifiers for Europe over the last 2 years in the Welsh Premier. They were formed in 1880 and like their opponents, they had come from the Cymru Alliance. They joined that league in 2004, after playing in regional Welsh football. They took to their new surroundings very well and within 5 seasons were promoted to the Welsh Premier. Lately, they have qualified for the European playoffs, including when they beat Port Talbot in 2013, a game which I went along to. That got them into Europe where they faced the Estonians Levadia Tallinn. Despite winning the first leg 1-0 at Rhyl, they lost 3-1 in Estonia to go out on aggregate.

Port Talbot were in mid-table, just below the last spot for European playoff qualification. I had seen them before, ironically in a European qualifier against Bala. They had been in the top level in Wales since the turn of the century, having previously been in the more regional leagues of Wales. Their best finish came in 2010 when they finished 3rd, that season was a memorable one as they also reached the final of the Welsh Cup, losing 3-2 to Bangor City in a game played at Llanelli. This resulted in their only foray into Europe, where they lost 7-1 on aggregate to TPS of Finland.

I  hadn't made the most of my last week off,  so I was keen to do better this time. Knowing that I already had a few days in Manchester, I was keen to try and extend it by a day by going to a game on Sunday. There was only one initially,  Bala Town v Port Talbot Town in the Welsh Premier League. I decided not to book my hotel until last minute because of the weather, but on the Saturday lunchtime before I was confident that the forecasted light drizzle would not destroy my plans. I found a hotel in Manchester and booked a night for £29.50. Wycombe had a great victory over AFC Wimbledon, winning 2-0 to remain top of the league. 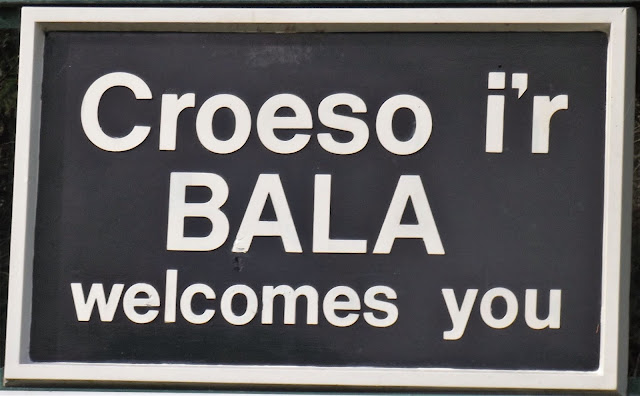 On the day of the game, I woke up at 7am and watched TV for a bit as well as going on Facebook to see what was going on. I got all my stuff together and left at 8.30, stopping to get the Non-League Paper and some cash out for my few days away. The weather was forecast to be rainy in Bala,  but on the way up it was all sunshine and blue skies. The roads were fine too. That was until I got past Shrewsbury and the A5 turned into a single carriageway with people driving at well below the speed limit and holding everyone up. I eventually got into Bala at 12 but spent another half hour trying to find the ground as the postcode given covered a large area. The mobile signal was totally pathetic,  with just a basic 'G'  signal which crawled along at a snail's pace, if at all. Eventually, I got on the clubs website and got more detailed directions, and once I  had followed them, I was there within a couple of minutes. It was now 12.30 and as it was an hour before kick off, I decided to go straight in,  rather than walking back to town. Everyone was really friendly but I was disappointed to find there was no bar because I could have done with a drink after all the messing around finding the ground. I couldn't even check Facebook as the signal was still awful and I think that O2 are doing the people of Bala a terrible disservice by forcing them to put up with a 1990's style mobile signal, in fact, it's pretty much the case for the whole of Wales in my experience. 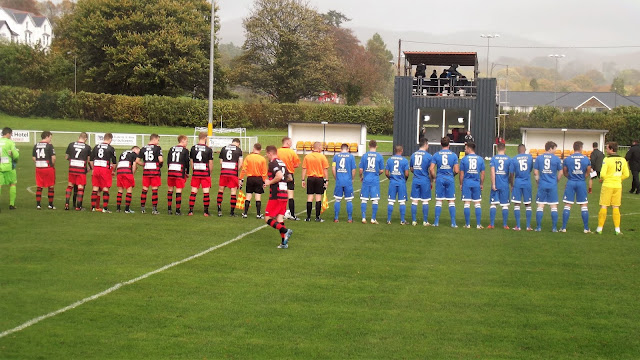 During the first half, I initially sat in the stand on the halfway line as it was raining. However, it soon stopped and so I went and stood on some grass banking in the corner of the ground and got talking to a friendly Wrexham fan who also did the occasional groundhop. He had come to see Wycombe at Adams Park when the Ebbsfleet v Wrexham game was called off at the last minute a couple of seasons ago. The first half was lively, certainly the most entertaining I have seen in the Welsh Premier League so far. Bala raced into a  3 goal lead and it looked to be a question of how many more they could score. However, Port Talbot gradually got back into it and just before half-time they scored the best goal of the game with a long-range shot into the top hand corner.  The second half saw much less action in terms of shots at goal. There was a goal right near the end though as Bala sealed their victory with a neatly worked 4th.

After the game I made my way to Manchester, initially on the slow Welsh roads but speeding up when I got to the M56. I listened to the Stoke v Swansea game on the way home, eventually arriving at 5.15. I listened to the rest of the game while I checked Facebook as I had barely had mobile internet all day. Around 6, I walked over a mile to a bar called 'The Font' in Chorlton. I'd previously been to one of their other branches in Manchester city centre and was really impressed. This one did not disappoint either. I had a delicious Chicken Mafe curry plus a few new ciders I had not tried before. I even splashed out £9 on one from America as a treat to myself, and it was really nice. After the meal, I walked back to my hotel which was right near Manchester United’s Old Trafford ground. I arrived back at about 8 and the plan was to watch Match of the Day 2, but this never happened as a mixture of alcohol and tiredness meant that I fell asleep just before 10. 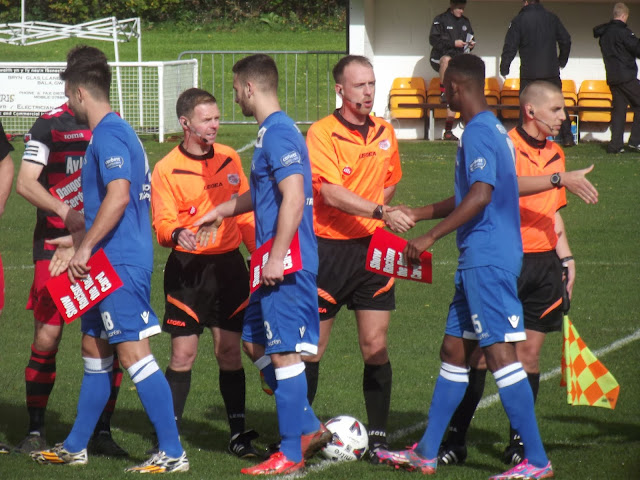 MAES TEGID is one of the smaller grounds that I have been to in the Welsh Premier. It is set in lovely countryside which makes for a great backdrop and a relaxing place to watch football. There are around 300 covered seats and some covered standing behind the goal. Apart from that, it is open to the elements although you can get a good view from the grass banking behind one of the goals.

The tea bar offers a good selection of stuff at reasonable prices, I had a nice portion of chips for £2. There was no club merchandise when I went and even more annoyingly, no bar. That said, the town is a few minutes walk away and has lots of pubs, though none selling my favourite Gwynt Y Ddraig cider that I could see from the Internet. It's probably a good idea to have a pint in one and make use of their free WiFi as coverage is very patchy around the area for mobiles. Bala is probably the most Welsh place I have been, with lots of people talking in Welsh as opposed to English and all the tannoy announcements are in dual language. 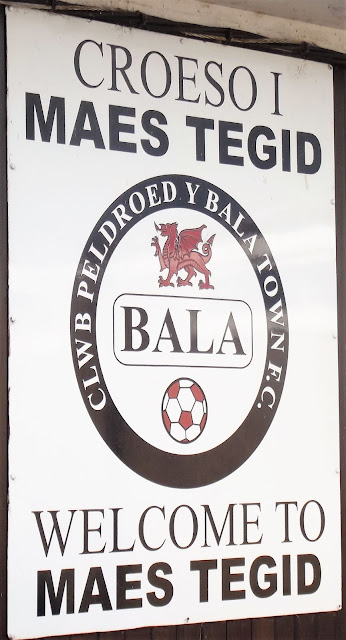 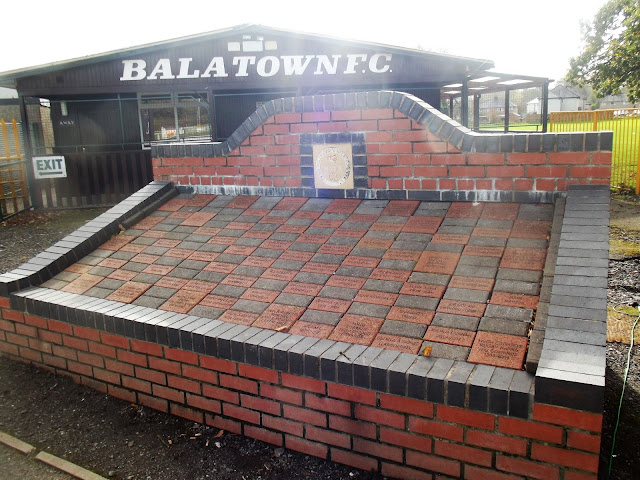 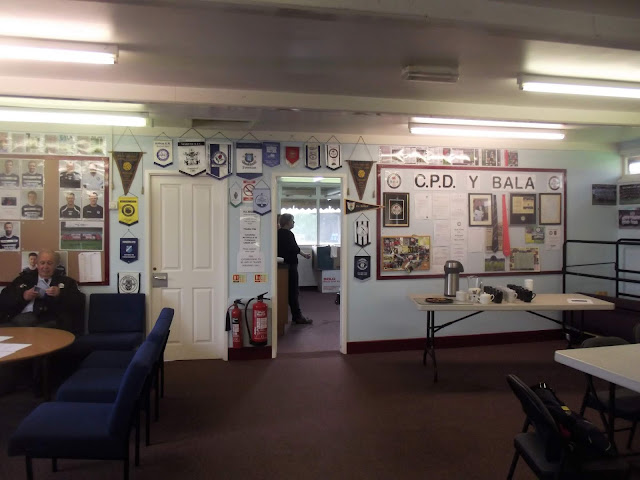 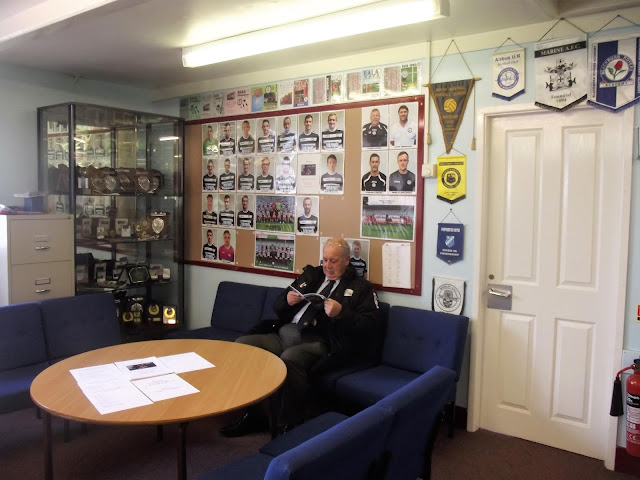 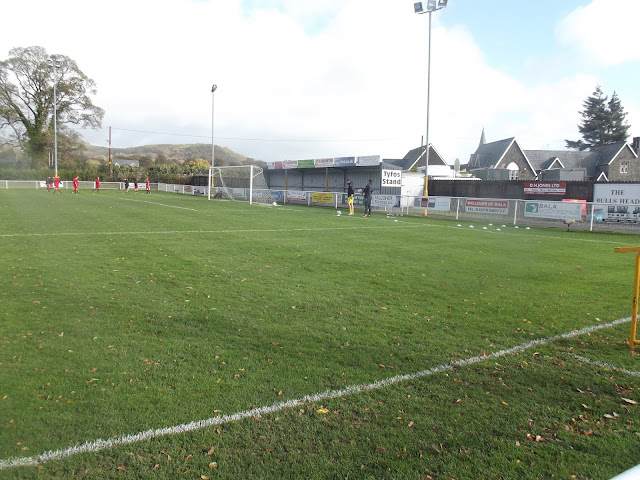 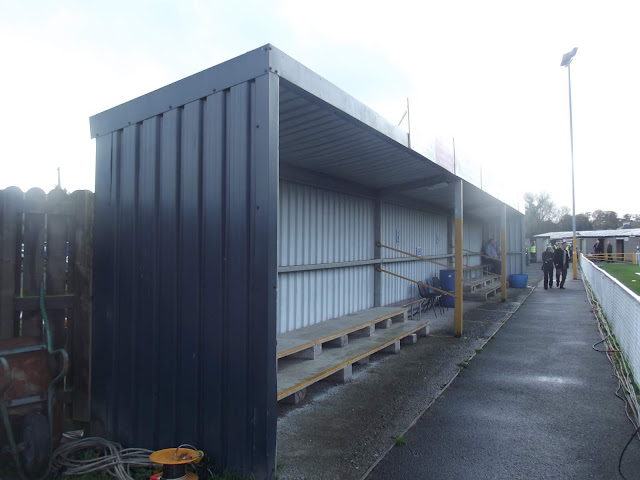 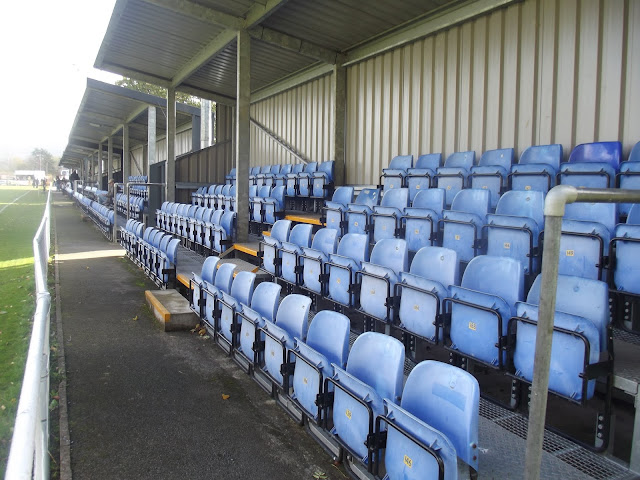 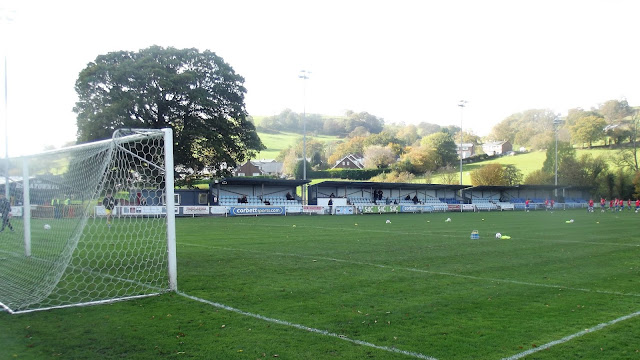 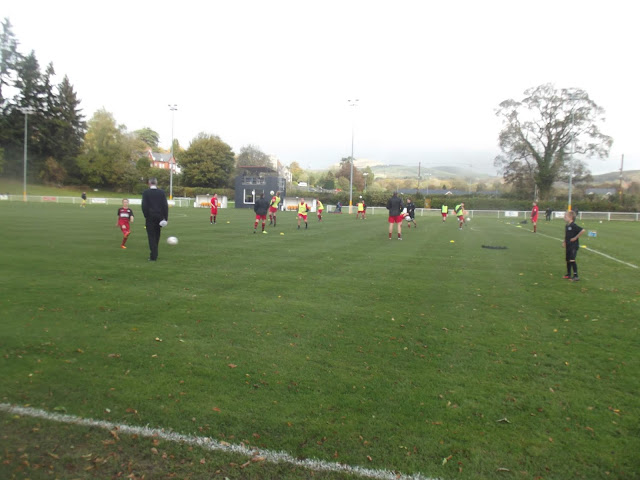 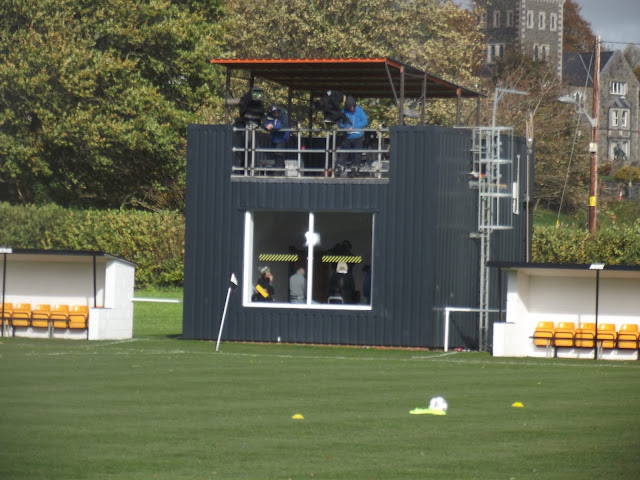 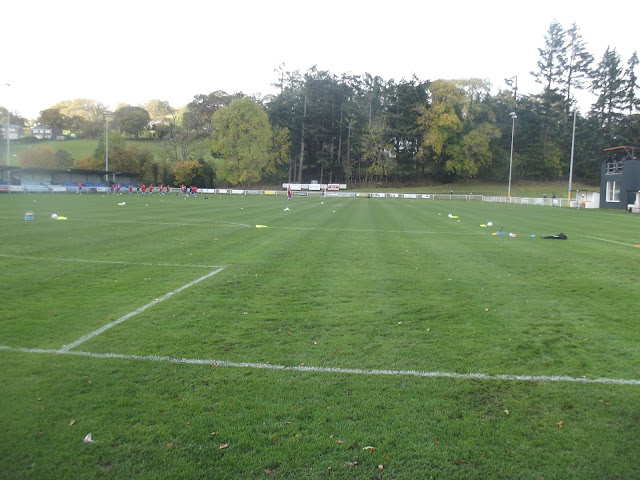 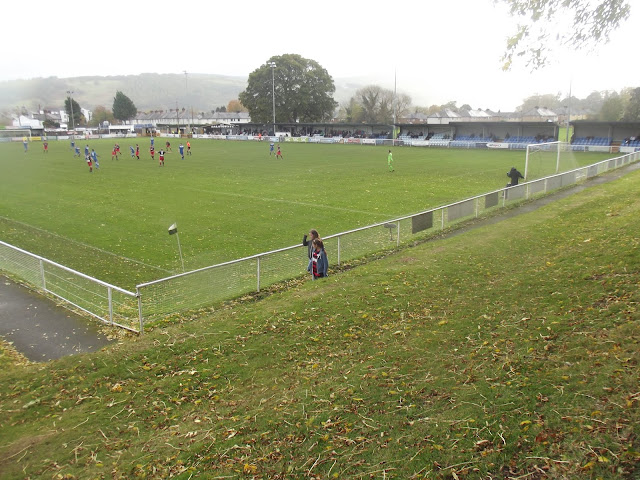