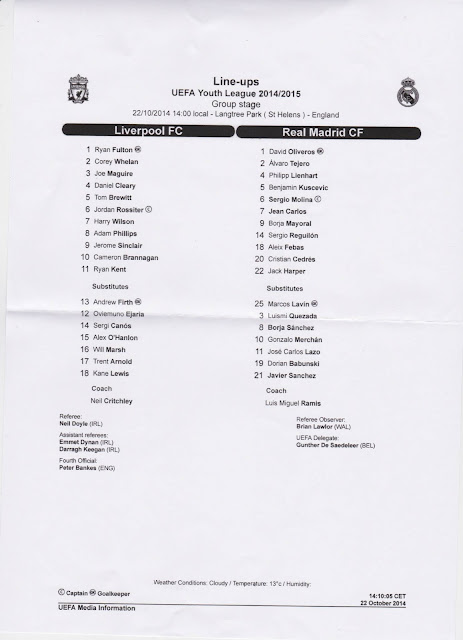 Originally on this day, I was going to go and see Mansfield Town's youngsters play. They play at Rainworth Miners Welfare FC who play in the Evostik Division 1 North. I'd then go on to see AFC Mansfield in the evening. But then a couple of things happened. Firstly AFC Mansfield's game was cancelled, due to opponents Dronfield Town's involvement in an FA Vase Replay. Then on Tony's Non-League Forum, I saw that Liverpool U19's were playing in the UEFA Youth League against Real Madrid. Not only would it be an interesting game, but it would also be played at a venue not usually used for football - St Helen's Rugby Ground.

I had connections and memories of all 3 places involved in this trip. Firstly St Helen's. I had gone to see one of my favourite bands - the Lancashire Hotpots play there back in March of this year, and also tied it in with a game at Burscough FC. The town's own football club once shared with the rugby club at their old ground for around 10 years, but that was long after they had their most famous player - Bert Trautmann, who was a German prisoner of war and who would go on to be a cult hero. The club is presently playing at Ashton Athletic near Wigan while they search for a new home in the town. Other famous people from the town include the comedian Johnny Vegas. As for the 2 teams on the pitch today, Liverpool had been involved in one of my team Wycombe's most famous matches, for they were our opponents in our amazing run to the FA Cup Semi Final in 2001. We beat Harrow Borough, Millwall, Grimsby, Wolves, Wimbledon and Leicester City to set up a showdown at Villa Park. Wycombe did themselves proud, narrowly losing 2-1 and becoming national heroes. Then in 2007, our youth team lost 5-0 to Liverpool in the FA Youth Cup. As for Real Madrid, I visited their ground on a tour whilst on a short break to watch Atletico Madrid v Austria Vienna in the Champions League last November.


On the day of the game, I woke up at around 8am. I had a shower and watched TV a for a bit before leaving at 9.30. I had to get diesel before I left at ASDA in Radcliffe, but soon enough I was on my way. I arrived in St Helens at 10.45 and parked up at the ground before walking into town. I got a few games from Cash Generator for a good price, before heading to Wetherspoons, a pub called The Glass House. I then had a pint of Black Dragon, my favourite Welsh Cider, before deciding what to have for lunch. Originally I thought about getting something from a takeaway, but in the end opted to have a meal deal, which included a Philly Cheese Steak Sandwich and all the trimmings, along with a pint of Strongbow for £7.29. By then, it was getting on for 1PM, so I headed back to my car, arriving at 1.10 and sitting listening to the radio while I let my phone charge for a bit. At 1.30, I went into the ground, paying £5 entry and picking up a free teamsheet. The atmosphere was strange, with a crowd made up mainly of schoolkids, who must have been having a great day out away from their work. It appeared that most were Everton fans as they were cheering for Real Madrid. I knew that Shaun of the 100 Football Grounds Club was at the game, but I didn't see him on the day. 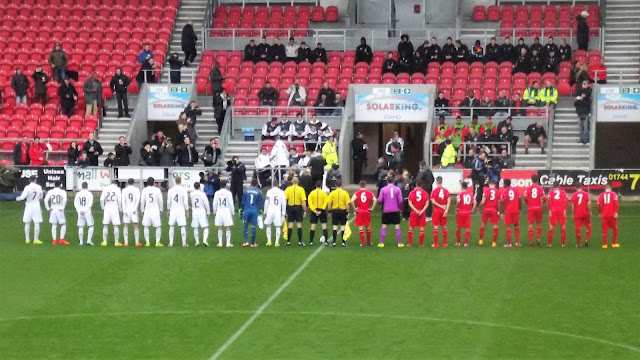 As for the game, it was an entertaining contest. Liverpool raced into a 2-0 lead within 20 minutes, only to be pegged back to 2-2 in the second half. Real Madrid even squandered a penalty to give them what would have been a goal back just before half time. But the some side won it on 88 minutes when Harry Wilson, who had played for Wrexham, finished well past the Spanish keeper. The most well-known player on the teamsheet however was Jordan Rossiter who had played against Middlesborough in the League Cup and scored a great goal, earlier on this season. After the game, I made my way to Maltby Main, but typically on the UK's roads, the journey was not a pleasant one, as I will detail in my next blog.

LANGTREE PARK is a smart modern venue, and it's a shame it's used for football more often. With around 11000 seats and 7000 terracing, it's a welcome change to the all seater stadiums you see in football and being modern, you will get a good view from wherever you are in the ground. It's also little over 10 minutes walk from the town centre, which has a wide range of places to eat and drink. 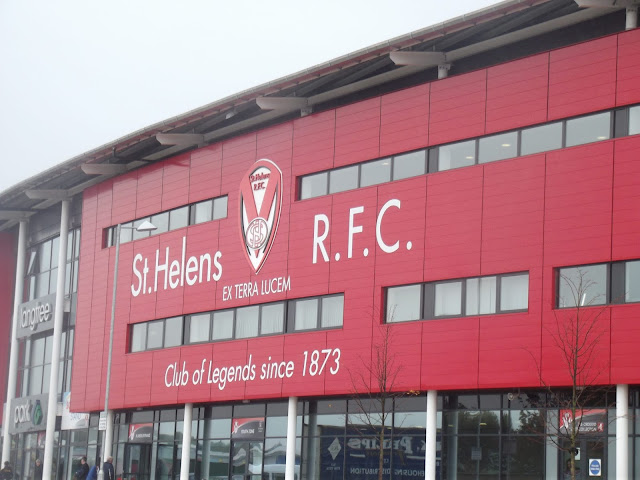 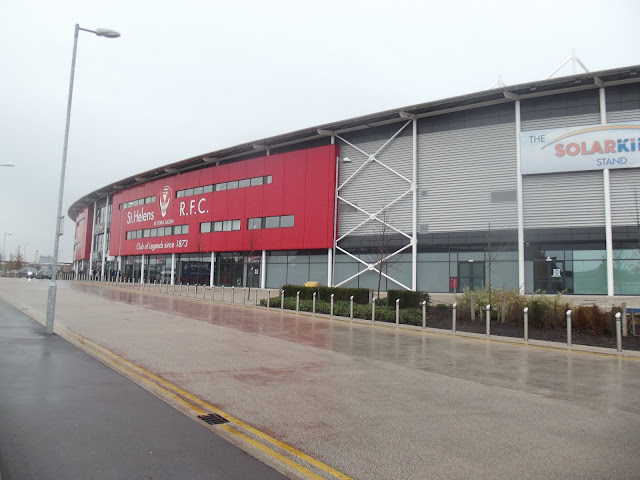 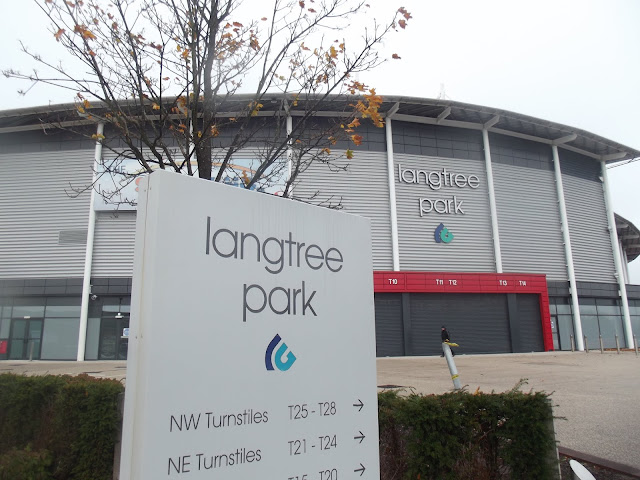 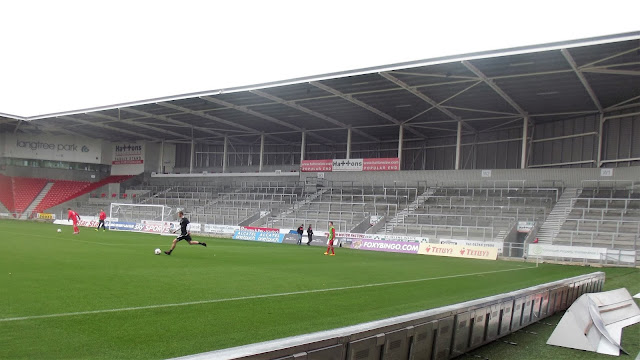 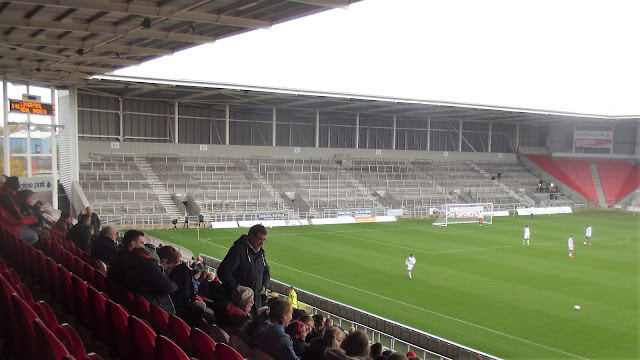 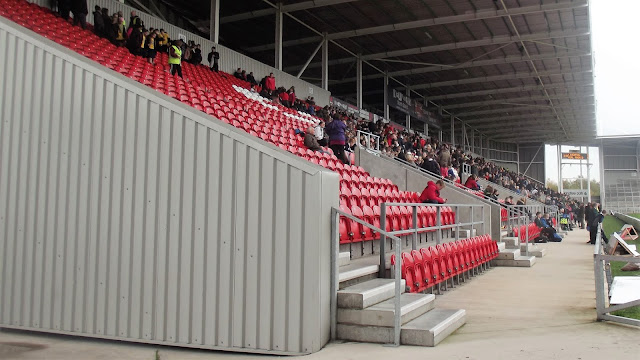 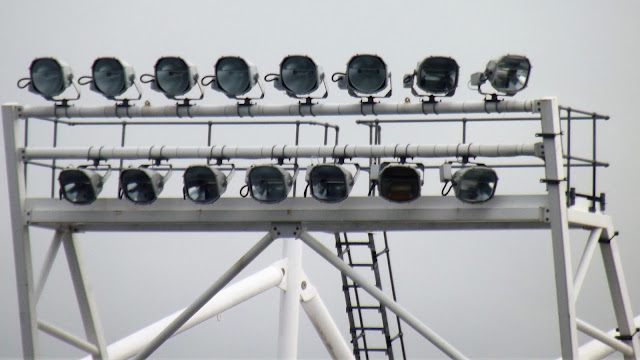