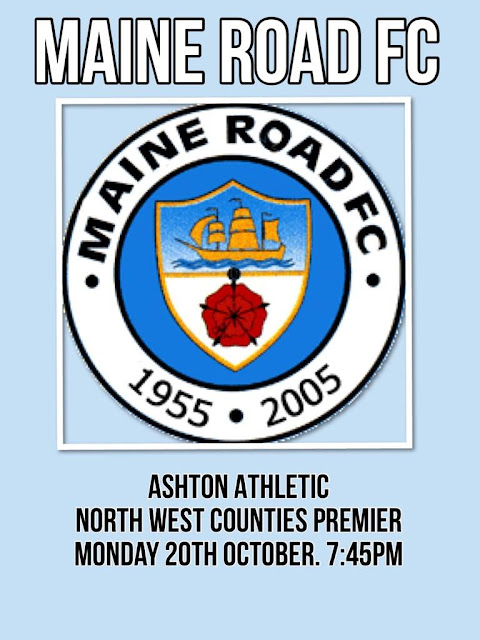 Maine Road is famous in football for being Manchester City's former ground, and indeed their badge looks like one of the Premiership club's former badges. The club was formed in 1955 by a Manchester City supporters group from Rusholme, the district of Manchester well known for its selection of Indian Resturants.  They played in the Manchester League for most of their history, joining the North West Counties League in 1987 when ground improvements allowed them to do so.  Initially, in the league's second tier, they earned a promotion within 3 seasons to gain a place in what is now called the Premier Division. Apart from a spell between 2002-04 where they were relegated, they have remained in the top division ever since. A best ever league finish of runners-up was achieved in 2013. Before the weekend's games, they were 6th in the league, but still 21 points behind leaders Runcorn Linnets, even at this early stage of the season.

In the FA Cup, the club has reached the 2nd Qualifying Round on a few occasions, most recently when they lost out to South Shields in 1997. In the FA Vase, the 4th Round was reached a couple of years previously where they were defeated by Leicestershire side St Andrews. Other cup honours include the Manchester Amateur Cup, the Manchester Premier Cup and most recently the North West Counties League Cup in 2008.

I'd not made the most of my last week off, staying at home and only doing a couple of games midweek. So I was disappointed in that respect and made a special effort to make sure that this week off would not be wasted. The first fixture that I planned in was Maine Road against Ashton Athletic. It was just about the only game on Monday night at a ground I had not been to, and more importantly, I had a meet on the cards, which in my mind is the best thing about football. Corin, a Chester supporter I know lived right near Maine Road FC and suggested a meet. We only just started chatting a couple of months ago, but he's a top lad and shares my passion for football. All being well I would be seeing Bala Town v Port Talbot Town on Sunday beforehand and Huddersfield U21 v Charlton U21 on Monday afternoon, before going to my hotel in Didsbury. I got to my hotel at 4 pm and with Maine Road being only 15 minutes away I had a bit of time to kill. I put my phone on charge and sat and watched Deal or No Deal. There was still plenty of time so I watched The Chase and had a bath seen as I only had a lukewarm one this morning. 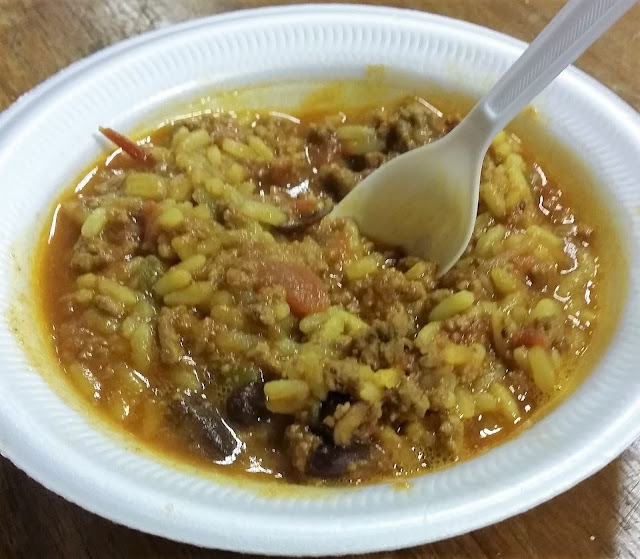 I left just before 6.30, knowing that I had to get dinner on the way or at the ground.  I saw a few takeaways on the way to the ground, but there was no parking at any of them so I made my way straight to the ground. I looked for takeaways in Google maps but it led me to two that didn't exist, so I went back to the ground. Annoyingly there were no programmes and no change at the gate, so instead, I headed to the tea bar to get some food. They had a good selection but I had to wait around 20 minutes for my curry, but at £1.50 it was a bargain. Although the picture I posted up on social media was littered with comments about how horrible it looked, it was totally delicious and amongst the best food I have had in a football ground. Just before kick off, I met Corin and his Dad who turned out to be great people. We exchanged scarves and chatted about groundhopping and old Chester v Wycombe games. It was brilliant to meet people that share my passion for football and who were really friendly into the bargain.

As for the game it was 0-0 until the 86th minute and all the chances came for the visitors. But there were plenty and it was only a great performance from the Maine Road keeper that prevented it being a hammering. By contrast, I don't think the home side mustered a serious chance on goal. 4 minutes from time a towering header for Ashton Athletic ended the Maine Road resistance and gave the visitors a richly deserved victory, much to the delight of their management team. After the game, I said my goodbyes and drove the 4 miles back to my hotel. I was still hungry and so I walked the mile to the Wetherspoons in town. They served food up until 11 and so I got myself a chicken burger, chips and pint of Strongbow for £5.49. A really good deal and the chicken was delicious too - proper chicken breast as opposed to breaded frozen stuff.  I was still enjoying chatting on Facebook so I tried a new American cider called Angry Orchards which was very nice. It was about 11 by then so I walked back to my hotel and watched Coronation Street. It was a toss-up between Peter Barlow and Manchester United as to who has the worst defence in Manchester on that night after Louis Van Gaal's side struggled to a 2-2 draw at West Bromwich Albion but in any case I got to sleep at half past midnight, having had a good day.

BRANTINGHAM ROAD is a fairly decent ground for step 5. There are covered areas on each side. On the far side seating for around 100 and on the other side standing for around 200. The rest of the ground was hard standing. There were no programmes on the night, and only badges on sale. The bar was closed too, which I heard was due to the local vicar not being there and them needing the church's permission to open. I can't help but think that the club are missing out on vital revenue. The saving grace was the tea bar which had a nice range of stuff including hotpot, chilli and curry as well as the usual pies. 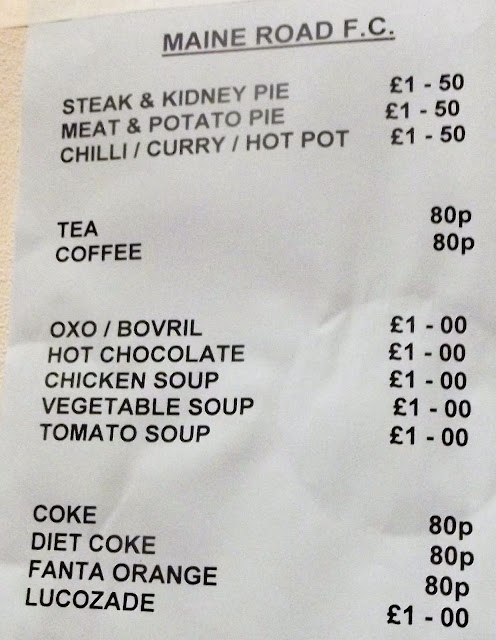 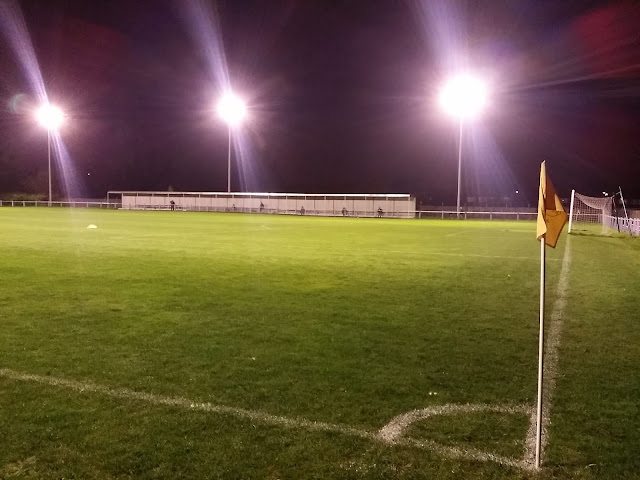 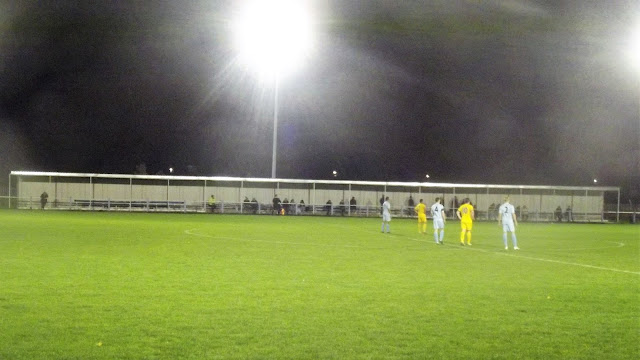 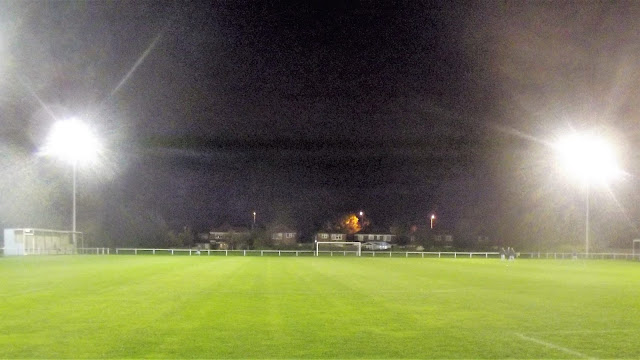 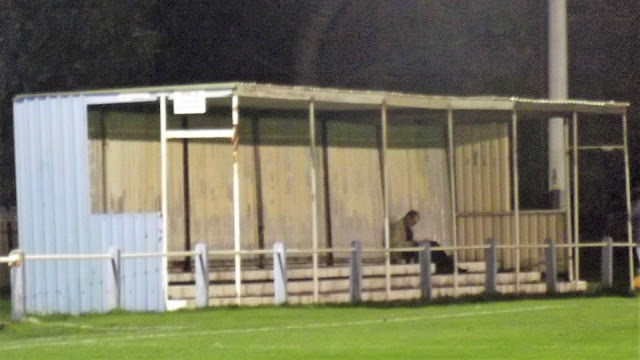 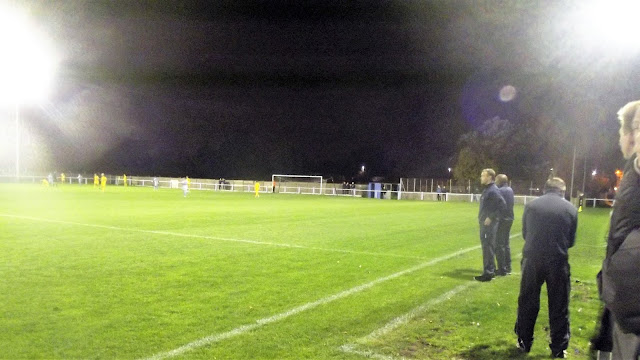 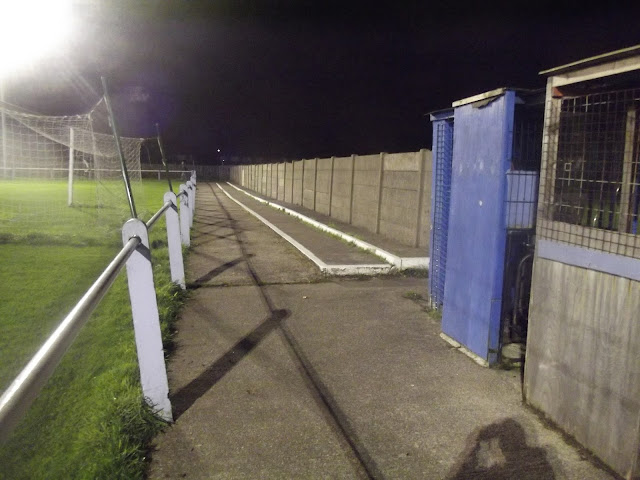