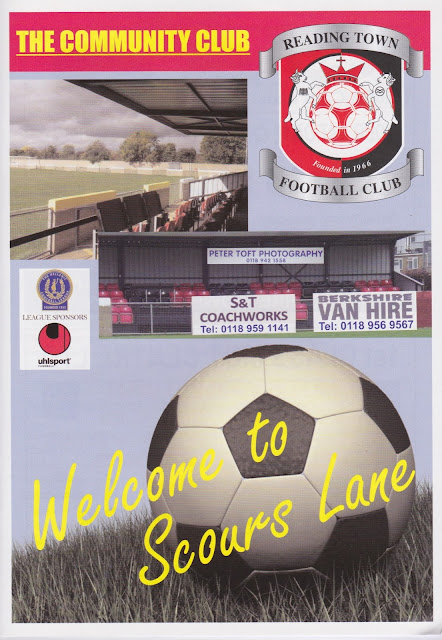 
The club was formed in 1966 in the midst of the fever surrounding England's World Cup win. Known as Lower Burghfield in their early days, and then various other guises throughout the late 80's, they finally settled on Reading Town in 1991. They were champions of the Chiltonian League in 1995, earning themselves promotion to the Combined Counties League in the process. They were runners up of that league a few years later and stayed there until 2008. That was the year that they transferred to the Hellenic League, where they had a best-ever finish of 3rd in 2010. Last season saw an 11th placed finish. They have not progressed much in the FA Cup, only ever making the 1st Qualifying Round and without a victory for 4 years, so room for improvement there. The FA Vase has been much happier hunting ground with the 4th Round being reached on 2 occasions, most recently in 2012 when they lost 3-2 to Larkhall Athletic. They have won a fair few local trophies, most recently the Berks & Bucks Senior Trophy in 2009.  They can count former England international Neil Webb amongst their former managers, while Stuart Beavon, father of the former Wycombe player of the same name appeared for the club as a player. 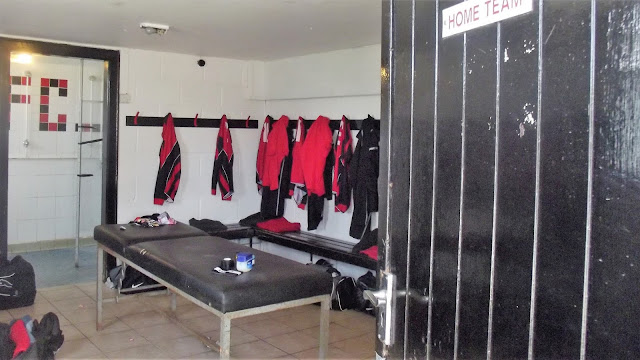 
As soon as the fixtures came out, I'd decided that I didn't fancy going to Newport with Wycombe. For a long time, I was all set to go to Whitehawk v Staines, mainly due to the fact that former Wanderers hero Sergio Torres was turning out for the Brighton based club. But the opponents Staines Town meant it would be just a run of the mill Conference South match, with no potential meets. Then I looked at my pub guide, and with nothing amazing nearby, I decided to save my money and go to one of the nearer games to my home in Reading Town v Highworth Town. This had the added bonus of a decent pub in town, plus a few shops worthy of investigation. I didn't have a huge amount of sleep on Friday night, but at least I had some, which is more than usual. I woke up just before 8 and watched TV and had a bath until 11. The journey to Scours Lane took just under an hour. I got to Reading Town FC at around midday. I walked to the local bus stop and waited around 10 minutes for the first bus into town. It turned out they were accepting exact change only, as was the daft case with many bus companies nowadays. I was allowed on anyway, and it actually turned out to be a bonus, as you will find out later. The journey took around 15 minutes and so by 12.30 I was in Reading. The first shop was the Alehouse, where I had a couple of ciders - Polgoon Cornish Cider and Lulworth Skipper Cognac Cask. They were highly enjoyable, but I was running out of time quickly, and so after a brief look around a couple of shops, managing to get some of my favourite Chocolate bars from Poundland. I’d not seen them for ages that cheap, so I was well pleased. I got a dinner of Chicken wrap and chips and made my way to the bus stop. After a couple of minutes, the bus was there, and I only ended up paying a £2 single fare to near the ground. I was in the vicinity by about 2.10, and still hungry, went to the local takeaway for some chips. I then made my way to the ground, arriving just before 2.30. I paid a very reasonable £6 (including programme) to get in, this was the perfect price in my mind, a fiver for entry and a quid for a programme. I went around the ground taking pictures and it was a strange one with a few caravans around the pitch. Overall it was a decent step 5 ground though, and after taking pictures I took a seat in the stand and started typing my blog. 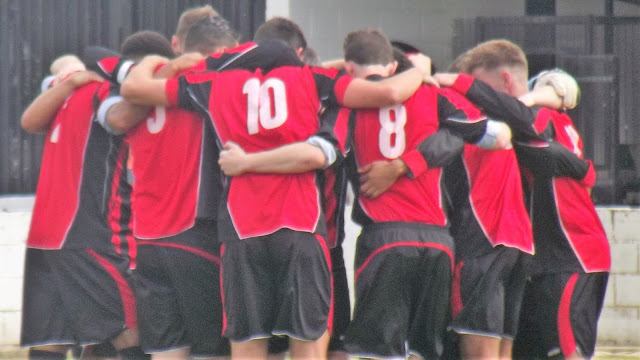 The game kicked off bang on time and it was the visitors asking all the questions early on. They got their reward 10 minutes in when they got a penalty which was successfully converted. 5 minutes later it was 2-0 with a lovely free kick, and luckily I had caught both goals on my camera. Reading started to have a few chances after this, but the Highworth defence and keeper held firm and it stayed at 2-0 without much danger of the scoreline changing. Highworth then had chances to extend the lead, but it stayed the same. Reading had their player Hughes sent off just before half time to make their task harder. The second half at my game continued in the same fashion and it was 3-0 on 56 minutes when a good ball was put into the box and number 9 finished into the roof of the net. 'Fuc*ing waste of my Saturday this sh*t' and with the home side's apparent lack of interest in getting stuck in, I tend to agree. His side did pull one back around 20 minutes before time, but it didn't look like changing the outcome of the game. To add to their woes Reading had a second player sent off, and it wasn't a happy day at the office for them. I'd enjoyed my visit though, a nice ground and a good value day out. That was how it stayed in the case of the game I watched, and the Wycombe game. I was pleased, it had been a really good day out, plus an excellent result for Wycombe and long may it continue, as last season was terrible. I stopped briefly at Morrisons, but I was home just after 6. I watched the Ipswich Town v Fulham game (2-1 to the tractor boys) and then Only Fools and Horses. I hoped to have an earlier night than last Saturday when I only got 2 hours sleep.

SCOURS LANE is a decent ground for step 5 level and not much should be needed to make it good enough for the next level up. There are 3 areas of cover, firstly stand along the side holding around 100 with a further 30 seats behind the goal, which also has a standing area for around 200. With another 100 covered spaces along the other side, you should stay dry when you come here. The bar is your usual clubhouse with a small range of drinks and I didn't see a tea bar or club shop. There is a range of takeaways near the ground, or you can get a bus into Reading, around 15 minutes away. 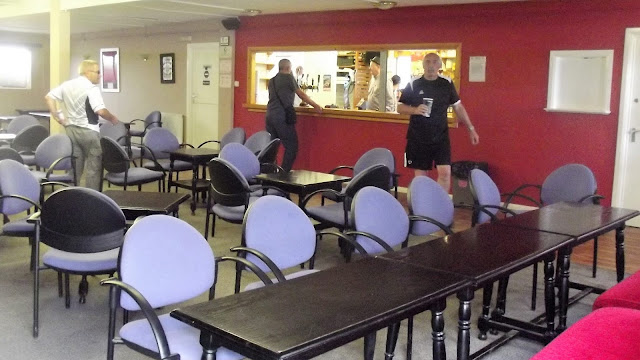 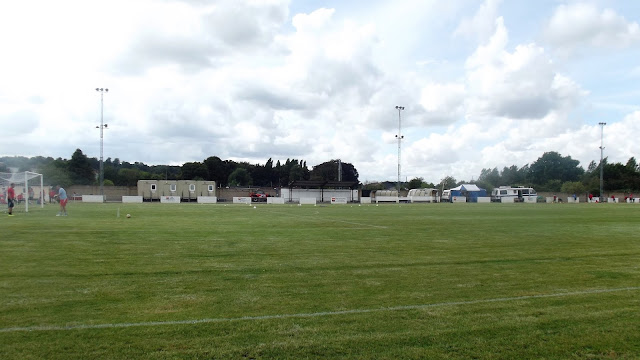 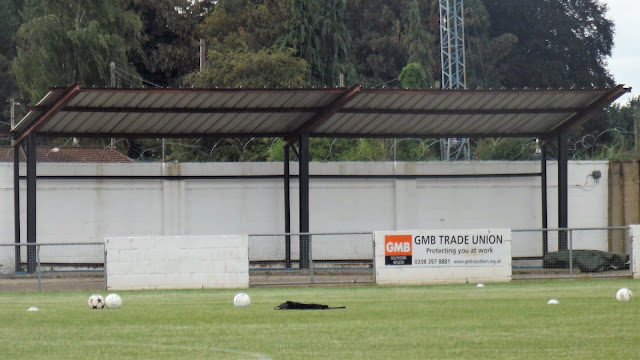 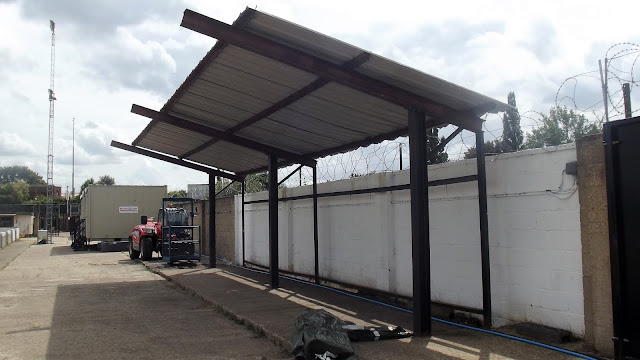 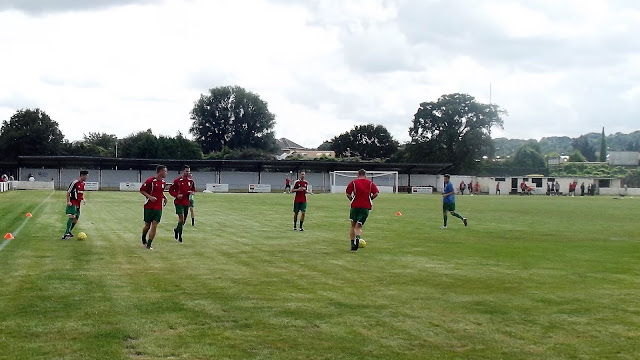 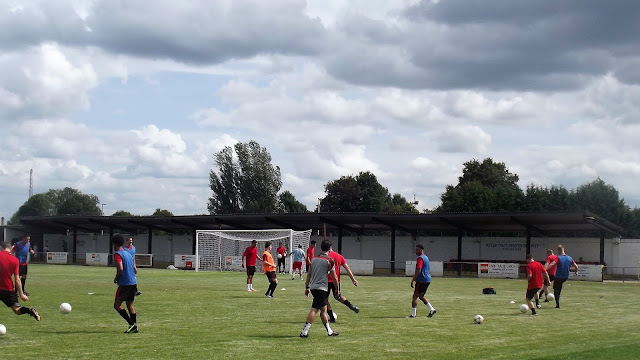 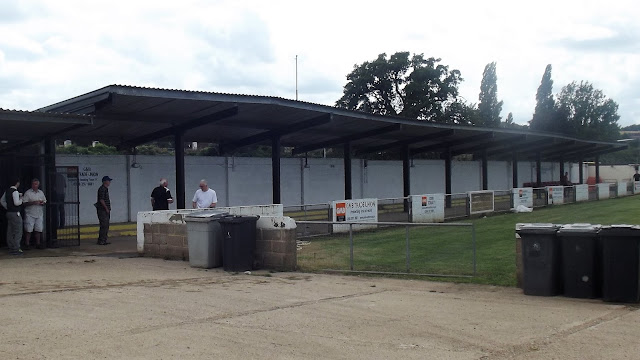 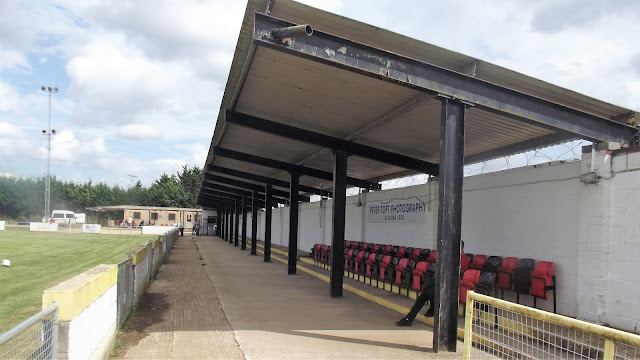 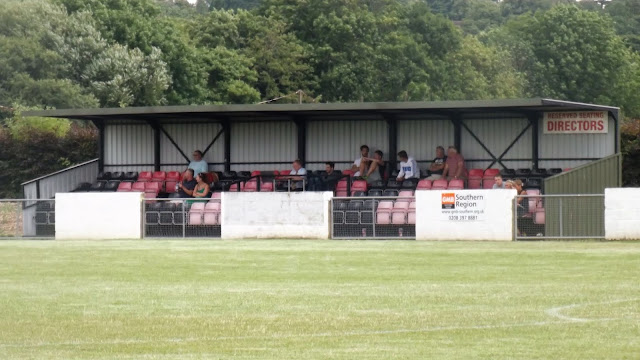 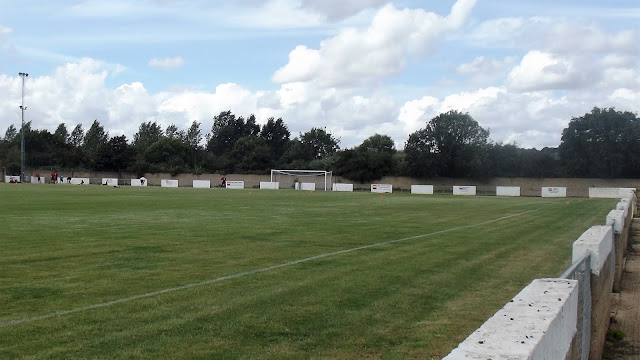