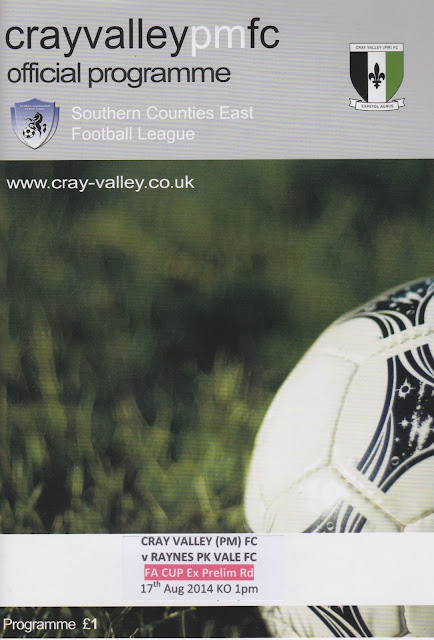 
Cray Valley Paper Mills to give them their full name were founded in 1919. The unusual suffix comes from the fact that they originally played at the Paper Mills, and were sponsored by the company and the Nash family who owned it, right up to its closure in 1980. They have spent most of their existence in local leagues, but for a spell in the 1990s, they were in the Spartan League, with a best finish of 2nd in Division 1 in 1998. A spell in the London Intermediate League followed, before finally transferring to the Kent League in 2002, winning promotion to it's Premier Division at the first time of asking. They were Champions in 2004, but could not take a promotion to the Isthmian League due to an insufficient ground. However, this was remedied in 2012 and now they have the facilities to go up, should they wish to do so. The league was renamed the Southern Counties East League the same year, to signify it's geographical expansion. Last season was their first in the FA Cup, they beat Lancing in a replay, before going out to Redhill. They also had their best FA Vase run, going out after a replay to South Park in the 2nd Round. 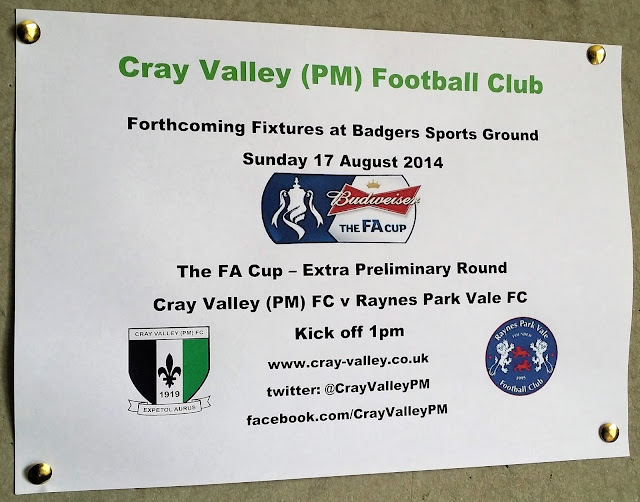 
As a big fan of the FA Cup, I was hoping for some games to be moved to the Sunday. A wide selection were and so I had quite a choice. Had Anwar been available, it would have likely to be Halstead. But with him busy and it being 80 miles away, that was not up for consideration. Of the other 2, Ilford and Tower Hamlets had running tacks, which were a real turn off. Favourite was Cray Valley Paper Mills who were playing Raynes Park Vale. This would depend on me getting out of work on time (likely) and the traffic behaving (debatable, as the M1, M25 and M6 had been a right pig in the last couple of days and they were not the only roads that were affected) In any case, it would be my 400th ground, and I was pretty pleased it would be for an FA Cup game. 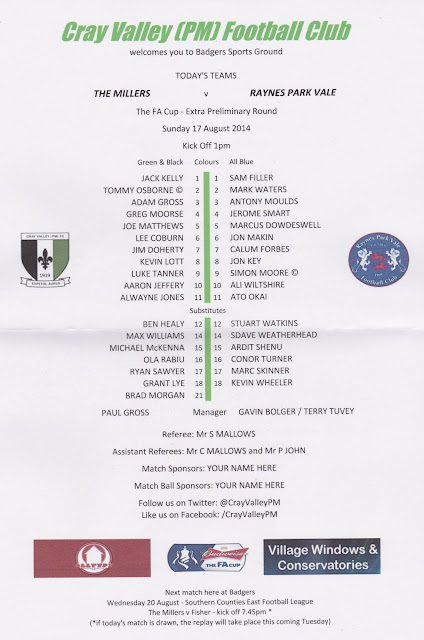 I was expecting a fairly easy day at work, and I wasn't wrong. In fact, it was even easier than usual, with me having done all of my jobs and helped others do theirs by 9.30. I could have gone off earlier but I wanted to stay till 10 to get the non-league paper and some Irn Bru. I took my half hour break, getting changed and looking at Facebook on my phone, before getting my stuff, paying for it and leaving for the game. It was a fairly painless journey, although the last 20 miles of it were through the slow-moving London traffic, though there were no real hold ups. I got to the Badgers Sports Ground at 11.40 and went and picked up a programme from the turnstile. I went to the bar and had a pint, paying for my entry and programme while I was in there watching Sky Sports. They even printed me off a well-presented team sheet which was nice. 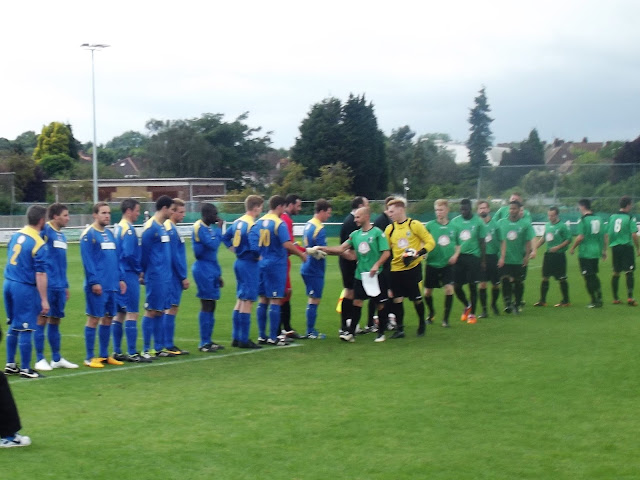 I went into the ground and hot an excellent bacon cheeseburger for £3. It was nearly kick off by then, but I went round getting pictures of the ground. I took cover under the stand as it was really starting to rain. Raynes Park Vale had the better of the first half, and they opened the scoring on 9 minutes when Lee Coburn deflected the ball into his own net, following a free kick. Aaron Jeffrey soon equalised for the home side when he finished from inside the area. The second half continued in the same fashion and on 49 minutes Simon Moore converted a penalty to put the visitors 2-1 up. It was 3-1 on 68 minutes as Marcus Dowdeswell headed in from the corner to settle the tie, to send the majority of the 106 crowd home disappointed. There seemed to be quite a few hoppers there too.

It had been another good afternoon at a nice club. Maybe not as brilliant as Staveley Miners Welfare on Friday, but above average, especially considering it's step 5. It was a worthy ground 400 for me in any case. After the game, I was still a bit hungry, so I went and got some chips with homemade Chilli Sauce from a takeaway called Charcoal Grill. They were very nice, and great value at £1.30. The journey home was not so good - there was a hell of a lot of traffic around Battersea, and I ended up being delayed by around 30 minutes. I still got in around 5 though, listening to the football on the way home. 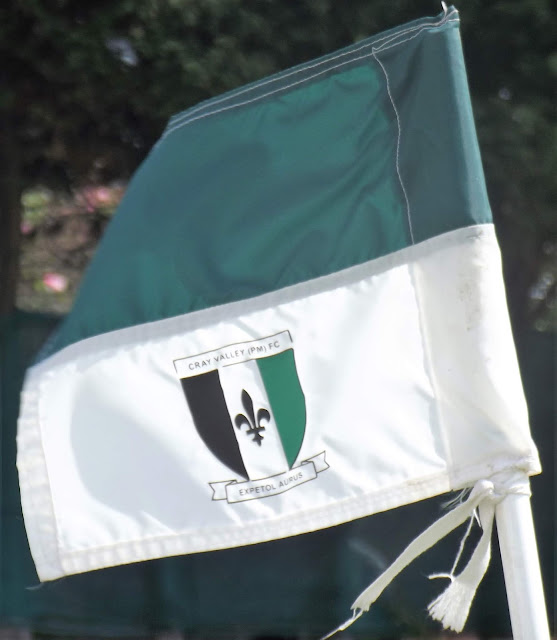 BADGERS SPORTS GROUND is a very modern ground and is typical of new builds in that it has metal stands. In fact, the club and ground remind me a bit of VCD Athletic, who are not a million miles away. At least the stands offer good sight lines and kept everyone dry today. There is standing for around 100, and seats for around the same amount.

As for other facilities, the bar is freshly refurbished and offers a nice place to sit and drink and watch the televised football. Cider wise, they do Thatchers Gold at £3.50 a pint, which is exactly the same as at Wycombe. The burgers at the tea bar were very nice, and they were cooked to order too, though they could do with having chips as well. I didn't see any club shop, but the team sheets are a nice touch, and the programme is well presented and has all the facts you need. The admission price at £7 is a bit higher than I'd ideally like to pay, but it is the standard admission in this league. Overall, a nice club, and well worth a visit, as you will get a nice welcome. 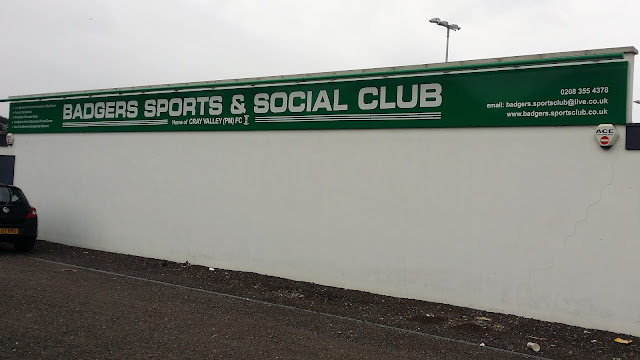 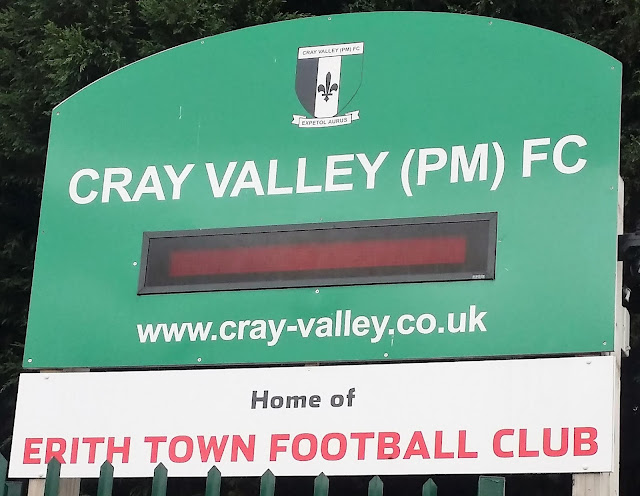 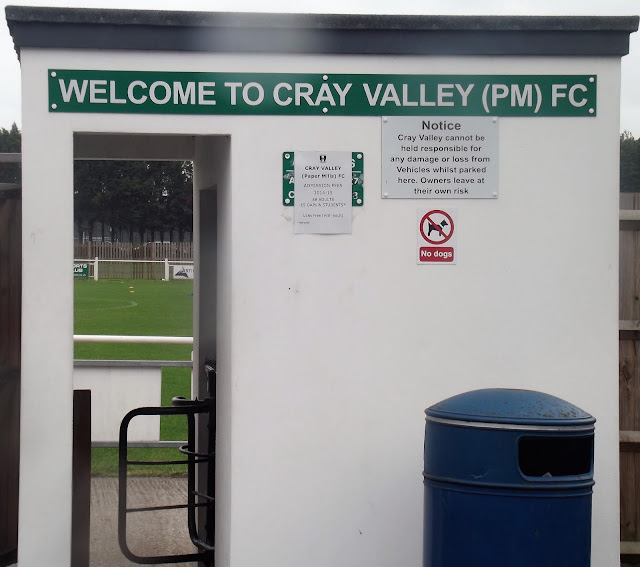 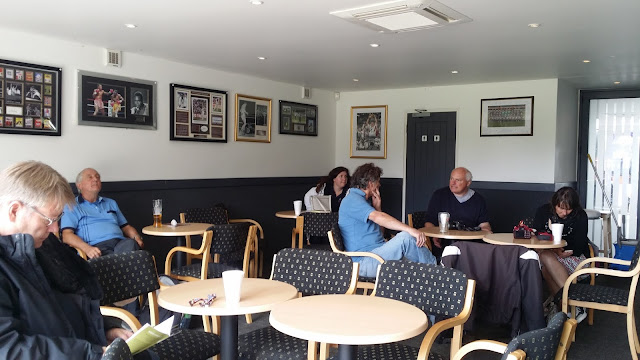 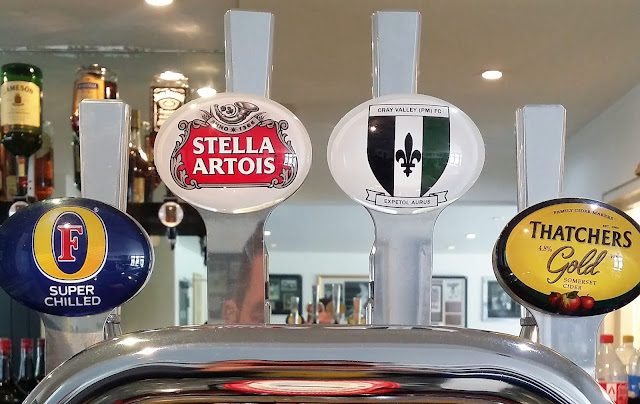 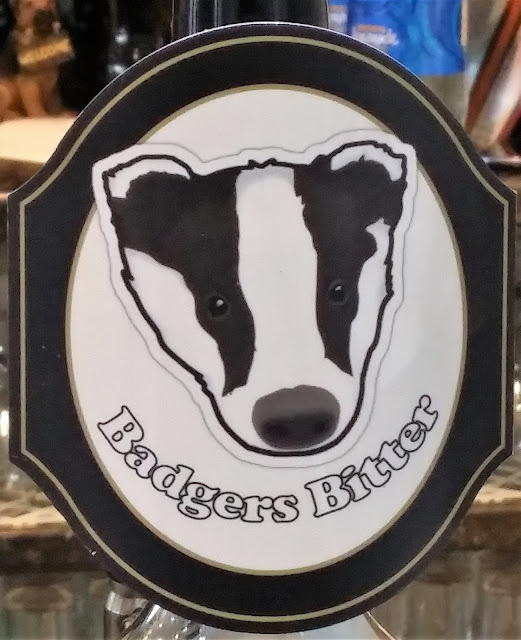 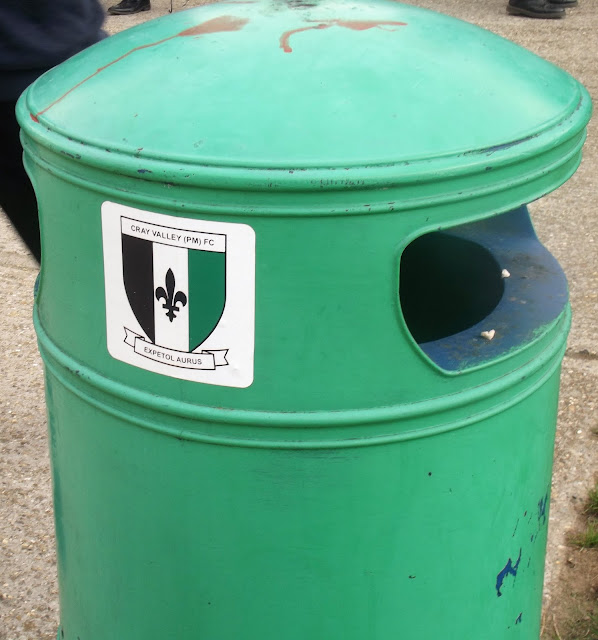 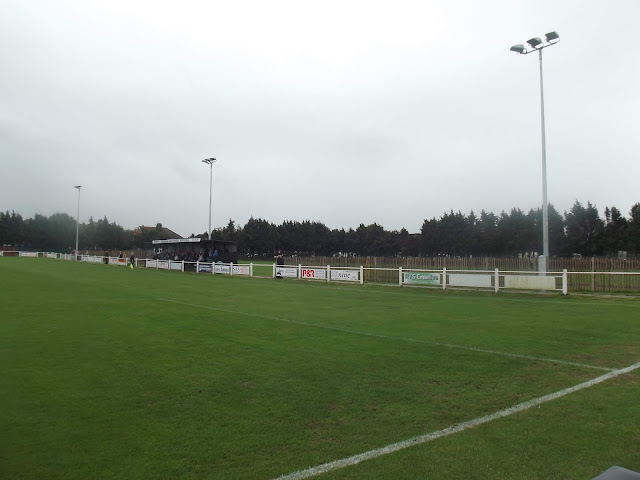 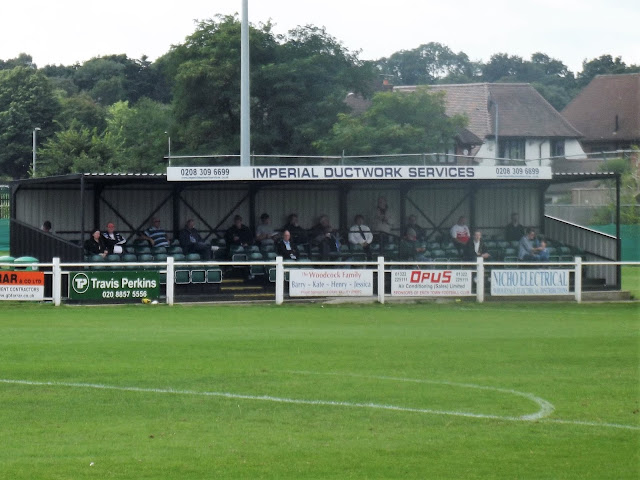 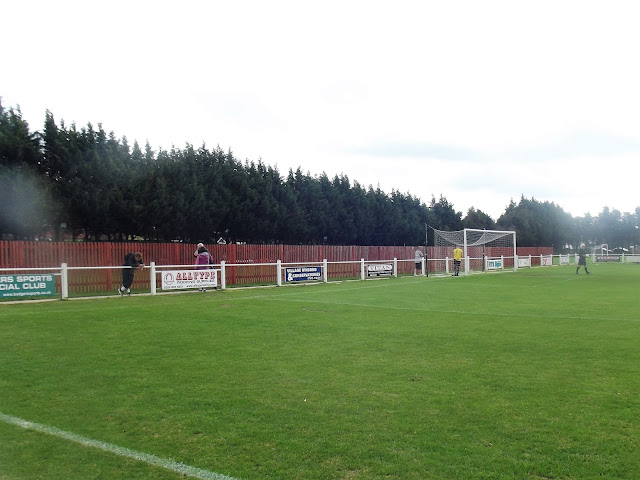 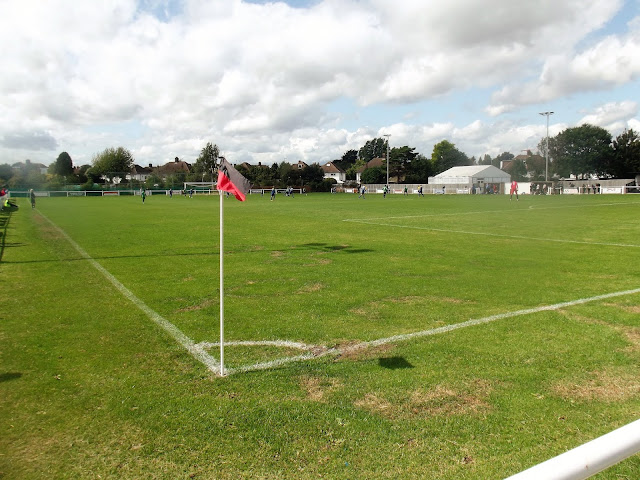 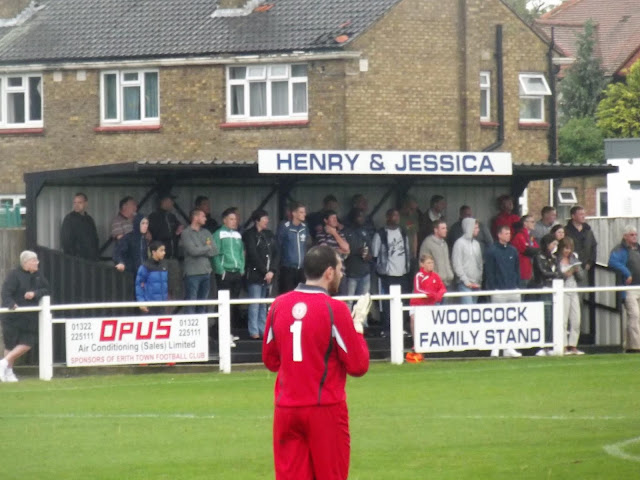 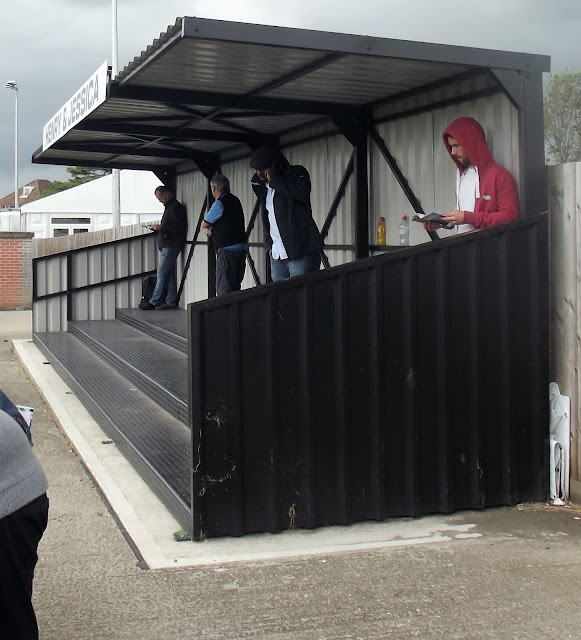 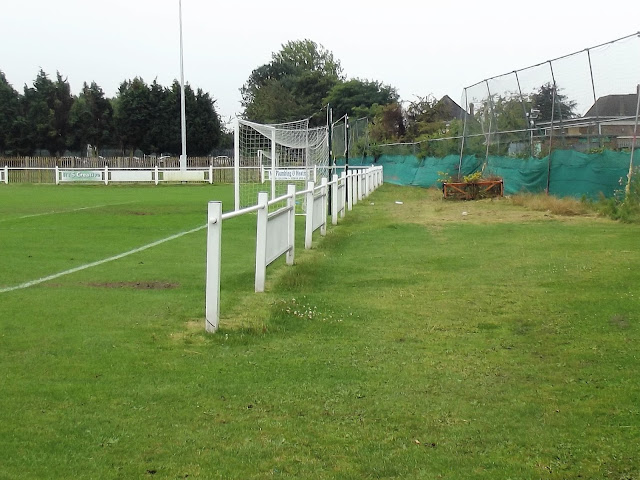 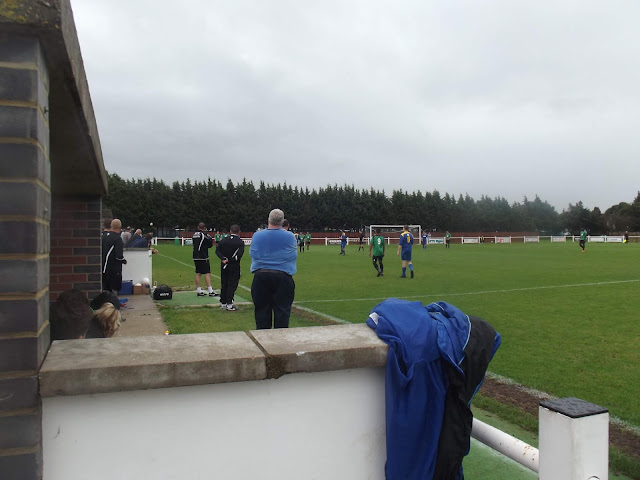