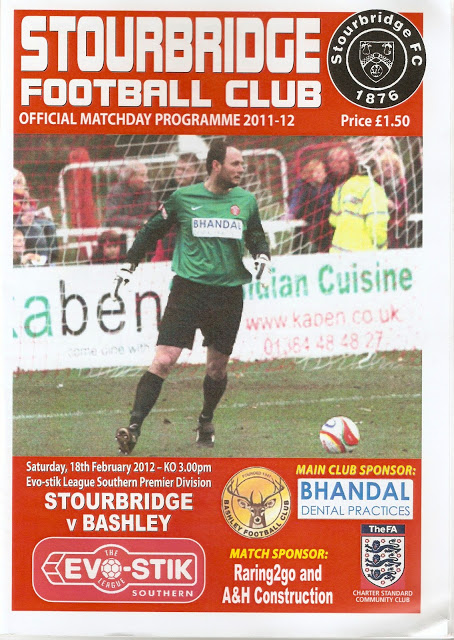 Since about August/September time I had been planning to go to Alfreton Town v Darlington on this date. But sadly, the main reason I was going, to meet my mate Dan the Darlington fan couldn't make it due to the supporters' coach not taking its usual route past the stop near where he lives. So at the last minute, I had to find an alternative. Even though it was not in a league I was looking to complete, I opted for Stourbridge v Bashley as I had wanted to go there for a while. Added to that I could go up most of the way on the train with the Wycombe fans, and hopefully gain a cheap train ticket through a 'Groupsave' offer, meant that I chose this one without too much thought. Unfortunately, when it came down to the day, lots of Wycombe fans had pulled out of going - understandable given our recent performances. So that meant I had to pay full whack for my train, but it still wasn't horrendous - £25, which is about the same as petrol would have cost. So we all left Wycombe just before 9.30am and was in Birmingham just after 11. After a look around Birmingham City Centre and the Bullring Market to kill time, I got the train to Stourbridge, firstly to Stourbridge Junction station, then to Stourbridge Town station - the journey between the 2 Stourbridge stations was made using the smallest, most rickety old train I have ever seen! I got to Stourbridge just after 1 and after a quick look around the town, it was time to try and find the ground. The instructions provided on the club website were easy to follow, basically, follow the A491 to Wolverhampton and the ground is opposite a pub. I was there in under 10 minutes. As I had time to spare I went to the pub across the road, called the Royal Oak, to watch the rest of the Birmingham v Chelsea game. This was a pretty much run of the mill pub in appearance, no food to my knowledge. But they did have a pleasant little surprise on draught - Thatchers Traditional Cider - one that I can't remember having, certainly not for a while anyway. And very nice it was too. After that, it was just past 2PM, so I made my way across the road and into the ground. After paying a very reasonable £9 to get in, I made my way to the club shop, which my research told me was very good. And I was not disappointed, as I spent £11 and picked up some great bargains. For that, I picked up: After that, I fancied a bit to eat and so I had Curry Sauce, Sausage and Chips for a pretty reasonable £2.50. And very nice it was too. Sadly, the combination of chip fat and trying to text and take photos on my phone at the same time as eating meant I got grease on the lens and ruined a load of my photos. Luckily though, it was nothing that I couldn't retake. The game itself was really good and entertaining, ending 5-0 to the home side. Stourbridge richly deserved their win to end a period of indifferent form and postponements due to the cold weather. At the bottom of this paragraph is the report scanned from the non-league paper. The journey home was pretty easy, coming back the same way as I had come. Another stop in Birmingham was needed as I had to wait nearly an hour for a connecting train back to High Wycombe, but that time was filled by going to a Wetherspoons pub called The Square Peg for a pint of Thatchers Gold. After meeting the depressed Wycombe fans, our beloved team having crashed 2-0 at Walsall in another dire performance. The journey home was fairly upbeat, but with plenty of reflection on what looks to be a certain relegation. We got home at around 8.20, after which I had a long walk up a steep hill to fetch my car from its free parking space. Better that than have to pay £10 to park in the station car park though. Overall I was glad I went to Stourbridge, it was an interesting ground, a friendly club and a good game. And it sure beats getting depressed, frustrated and angry at Wycombe, it is meant to be an enjoyable experience, after all. 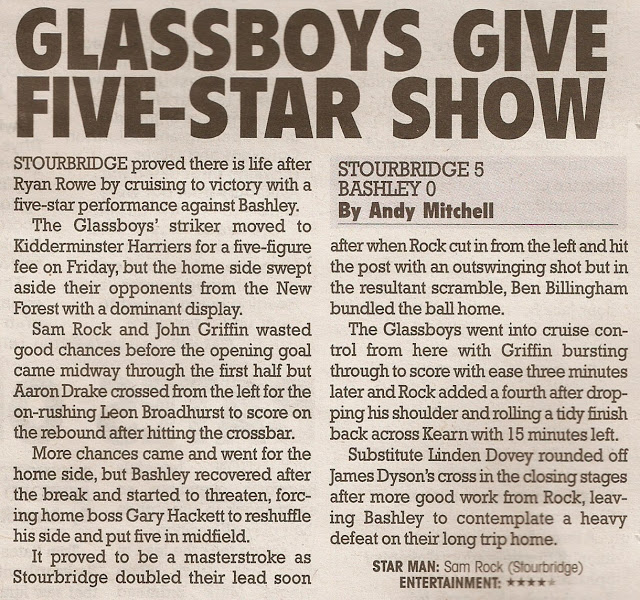 THE WAR MEMORIAL ATHLETIC GROUND is a charming little ground, but due to the ground graders, I am not sure if it would even make the Blue Square North, the next division up. These rules are proven stupid by the fact that Stourbridge have hosted 2 crowds of around 2000 already this year - against Plymouth Argyle and Stevenage, during their epic FA Cup run. As mentioned already, the club shop and tea bar are excellent. There is also a bar there which is large and has plenty of interesting memorabilia on the walls.

The ground itself is very pleasant. As you come in, to your right is the cricket pitch side, which has no accommodation for supporters. Directly in front of you is an open terrace behind one of the goals - looking at the way the turnstiles are set up, this could be the area that away fans are given, should segregation be needed in the event of a cup tie. This is called the Church End. After walking through there is the main stand, all covered along one side, with terracing either side of a seated area in the middle. Finally, the Shed End is a decent sized covered terrace, where all the noise from the home fans come from, and this was my choice of area for most of the game. Plans are afoot for ground improvements, should they be needed, though there are no firm timescales on this. 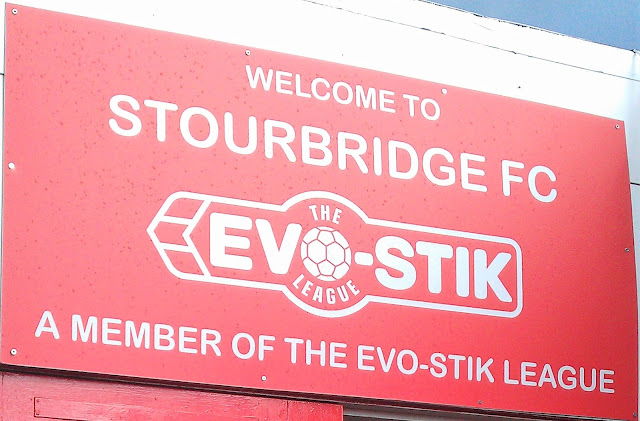 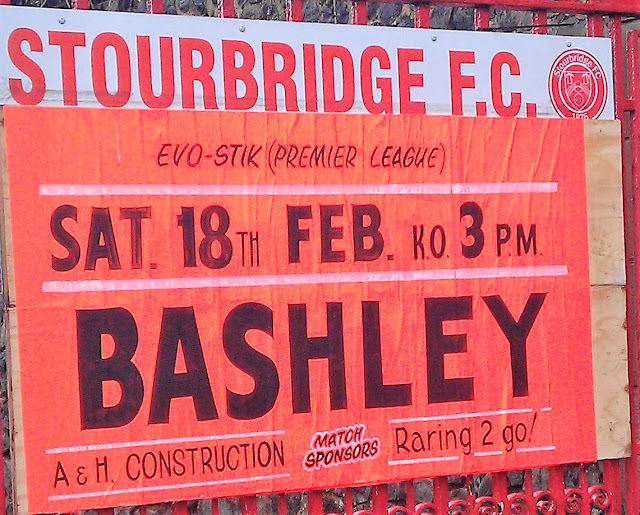 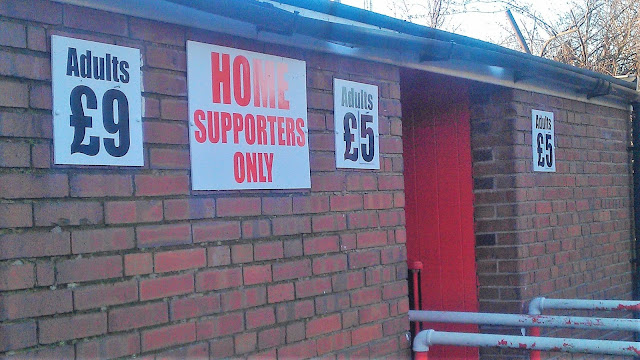 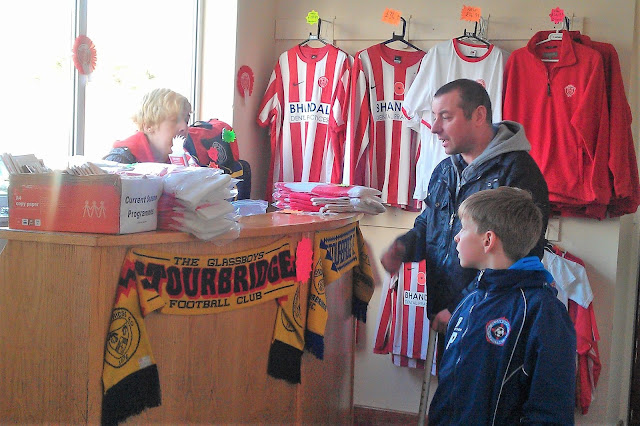 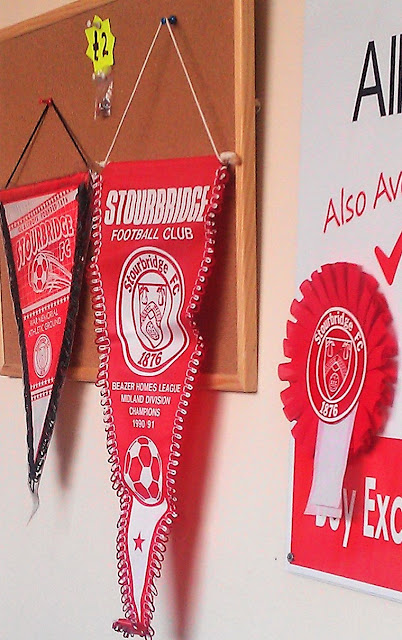 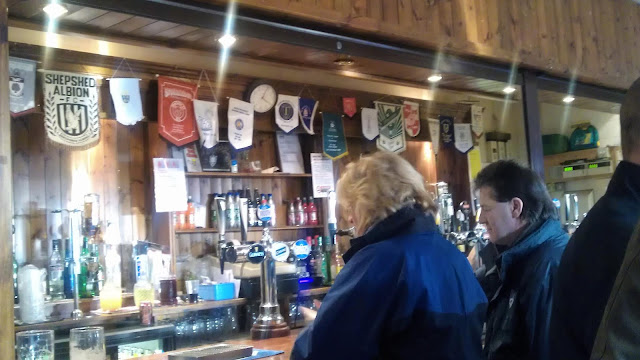 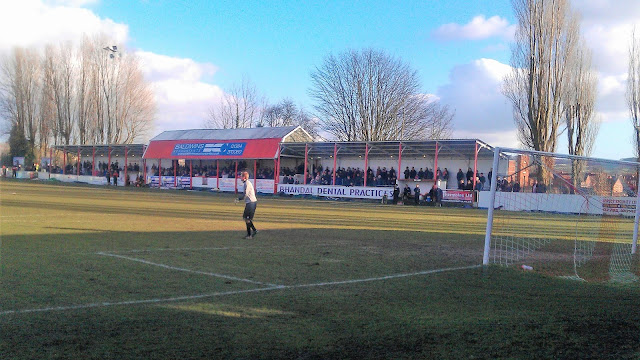 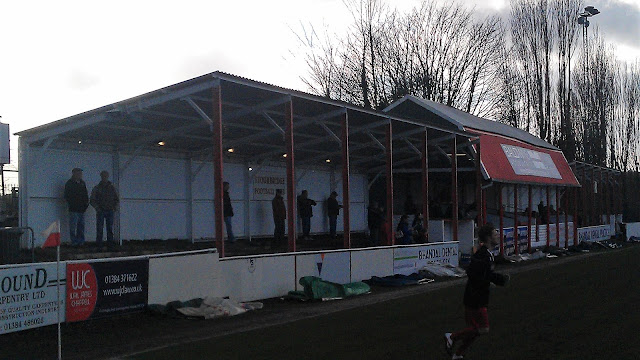 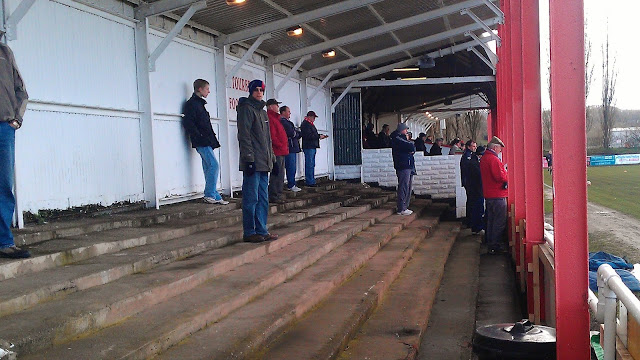 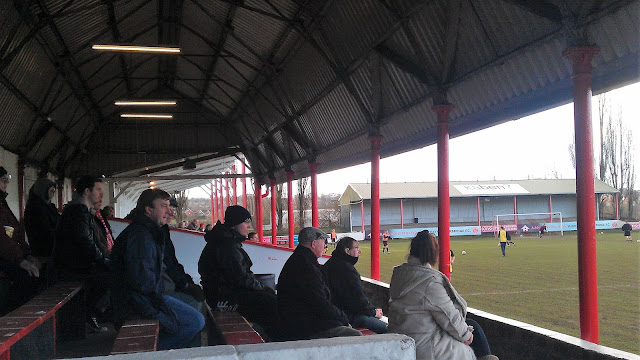 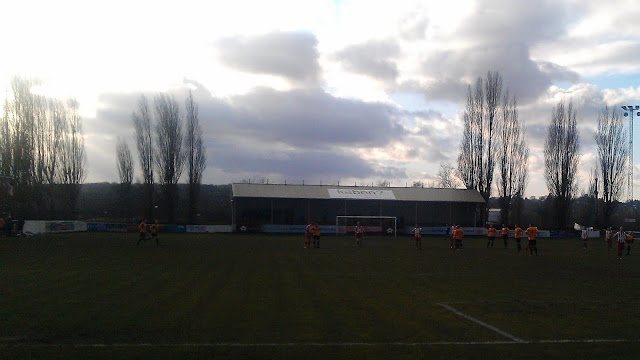 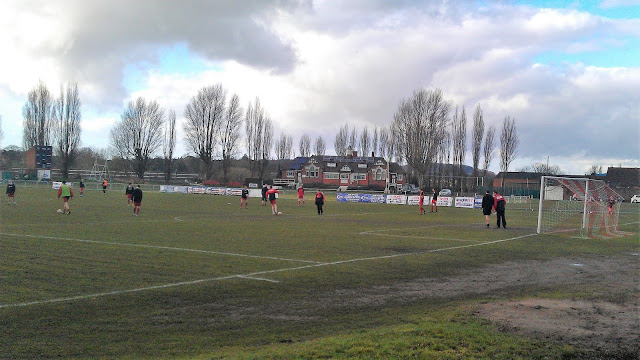 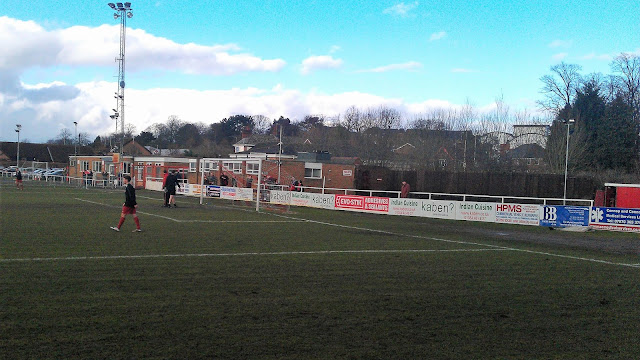