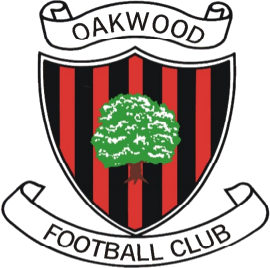 Oakwood FC
Tinsley Lane
Crawley
West Sussex
RH10 8AT
07469 394921
Official Website
Twitter
Ground Number: 1021
Tuesday 9th November 2021
Oakwood 1-2 Roffey
Southern Combination D1
OAKWOOD FC - A BRIEF HISTORY
The club was established in 1962 by pupils from the local St Wilfrids school who favoured rugby and took its name from the estate on which the school was situated. They played against other school teams until 1966 when they joined the Crawley & District League. They progressed up the leagues and were Division 1 champions in 1974. They played in the Southern Counties Combination League (no relation to their present home) for a few years in the early 1980s before joining the Sussex County League in 1984. They were champions of the newly-formed Division 3 in their first season here and then in 1988, a third-place finish behind Langney Sports and Bexhill Town saw them promoted to Division 1. They'd only last one season before being relegated but bounced back straight away and would remain in Division 1 until 1997. During this time they enjoyed their record league finish, 8th in Division 1, at the time effectively a step 4 league although promotions were a lot less common then. Oakwood would stay in Division 2 in 2006 when they were champions. They would spend three seasons in Division 1 before being relegated once more before a 4th place finish was good enough for promotion in 2014. The league rebranded that season and Oakwood have been members of the Southern Combination Division 1 ever since. Though they finished 3rd in 2015, they have generally finished in the lower half of the table. 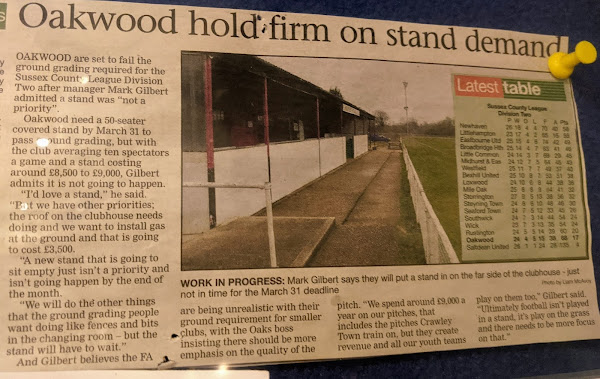 There has been little joy to be had in the FA Cup with only the 1st Qualifying Round reached on a couple of occasions. The FA Vase is a similar story with them reaching the 1st Round nine times but having gone out at the first hurdle in the last eleven seasons. Local cup honours include the Sussex League Division 2 Cup in 1990, the Southern Counties Combination Cup in 1984 and the Crawley Senior Cup in 1974. Their highest attendance varies depending on what source you look at. 527 for an unspecified game or 222 for an April 1992 game against local rivals Three Bridges. The club is based in Crawley which has a population of around 112,000. They share the town with Football League side Crawley Town and Isthmian League outfit Three Bridges. Famous people with connections to Crawley include singer Ms Dynamite, England manager Gareth Southgate, comedian Romesh Ranganathan, actor Peter Vaughan (Grouty in Porridge) and band The Cure. 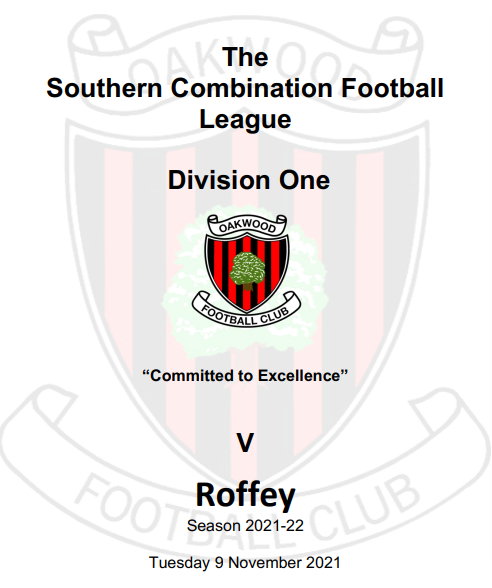 MY VISIT
I was originally going to visit Oakwood on 3rd November 2020 for their game against Lancing in the Sussex Senior Cup. However, the pitch failed an inspection and so I headed for Broadbridge Heath against Whitehawk instead. In what turned out to be a very disrupted time in life, it was the last match before lockdown. I was going to go for a Forest Row game in the summer, but some unseasonable rain and the fact that it was being played on the outside pitch saw me head for Basingstoke Town instead. This visit was arranged last week, with fellow hopper Colin in mind. I'd already been to Stourbridge with Anwar on Monday night for a revisit and a reasonable time was had. I'd stayed up late and so woke at 9 on the day of the game. After a bath and getting dressed, I walked to town and back, picking up a few things that I needed. I had lunch and spent the afternoon at afternoon, watching YouTube and starting tonight's blog. I left at 5.20, meeting Colin at 5.45. It was a good journey down surprisingly although Google Maps initially directed us to the wrong entrance. Waze got us where we wanted to be. I wasn't hungry and so didn't bother with a takeaway, the selection in the area was poor anyway. Entry was a well-priced fiver and we had around 40 minutes to kill before kick-off. A sausage roll for £1.50 from the bar was decent and was more than enough to keep me going for the evening. We had a walk around the ground before the game started. 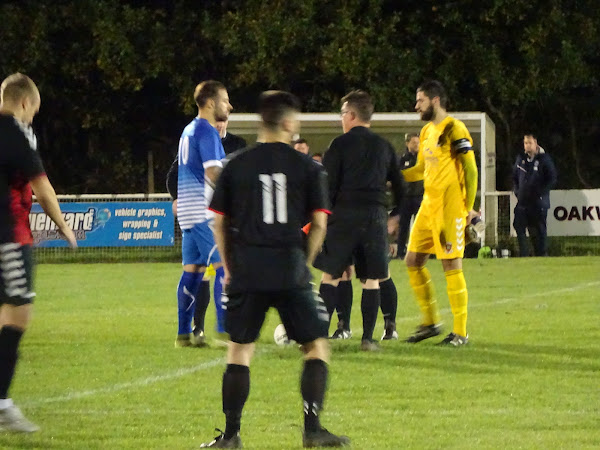 Oakwood had been in mixed form recently. They'd gained a good 2-2 draw at Arundel on Saturday. They'd also beaten Selsey 2-1 and won 5-0 at Storrington. However, they'd lost 2-0 at Mile Pak and 6-0 at Epsom & Ewell. They were 14th whilst Roffey were flying high, sitting in 3rd place. The visitors were in great form, with four wins in their last five games. They'd beaten Worthing United 5-1, won 3-2 at Broadbridge Heath, 4-0 at Mile Oak and 5-3 against Shoreham. The only blot on the landscape was the 2-1 loss at Wick in the Peter Bentley Cup. The first half was a reasonable game, Roffey took the lead on 36 minutes when Harry Law headed home from a corner. The game fell a bit flat after that. Oakwood would equalise just before the hour, a deflected shot finding the bottom corner. After the visitors had dominated the first period, the hosts had much the better of the second. They had a couple of shots narrowly wide but it was Roffey that scored on the break right at the death, a goal by Josh Neathey. It was harsh on Oakwood but Roffey had been well supported. Although no attendance figure was given, I'd guess around 70 which was a decent figure for the home club. 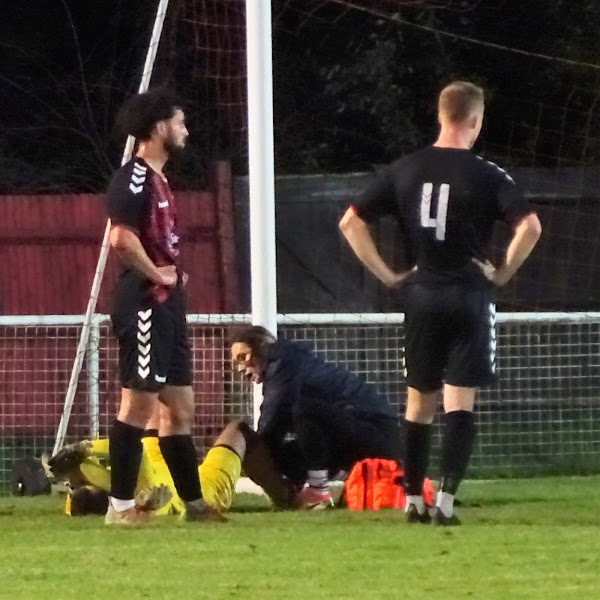 We left around 9.40, with the game having a bit of injury time. We had to go a different route to the one we came in due to roadworks and had to take small roads up to Reigate and the M25. Normally, I'd listen to Greatest Hits Radio but Colin was very talkative and so I had to listen to him all the way home. I dropped him off at 10:50, getting back home ten minutes later. I stayed up for an hour before going to sleep. Despite a reasonable nights sleep, I took ages to get going the next morning and was late for work. I'll be glad to have a couple of days off going to football as I've not enjoyed it as much in the last few games as I have lately. I'll be back at it Friday though, most likely in Wales which is the only place I've really enjoyed the game in the last week or so. 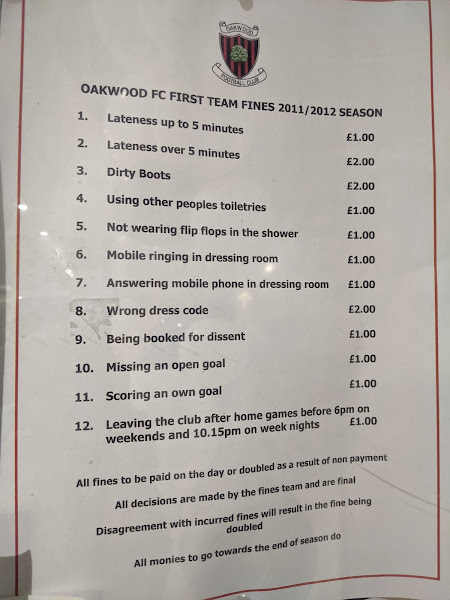 THE GROUND
TINSLEY LANE is a decent venue for the level. There's the standard 50 seater metal stand that was forced upon the club by ground graders. Aside it, is the club building with a large overhang and these provide more than enough cover for the average crowd. The rest of the ground is open. There's a basic bar and food but the nearest shops are around a mile away. 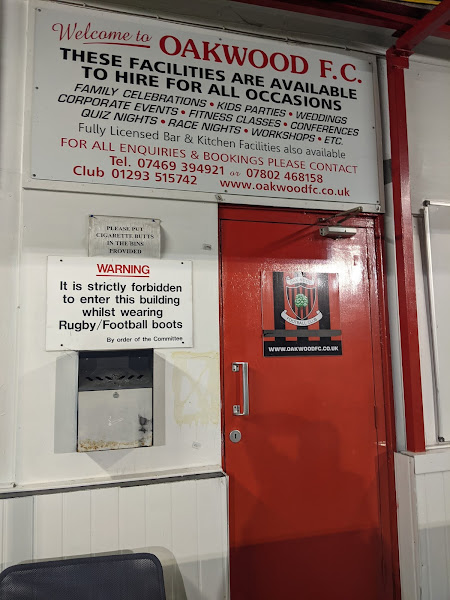 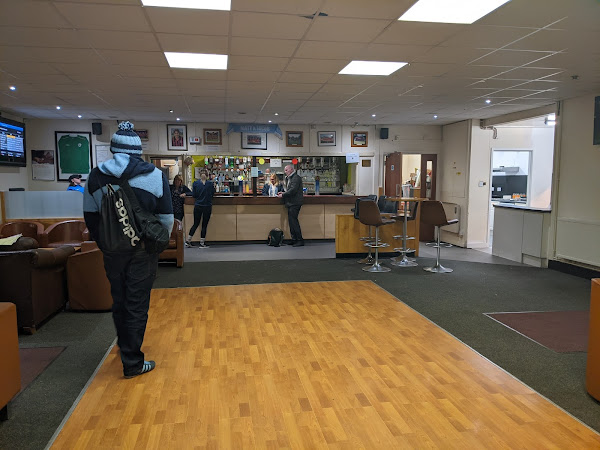 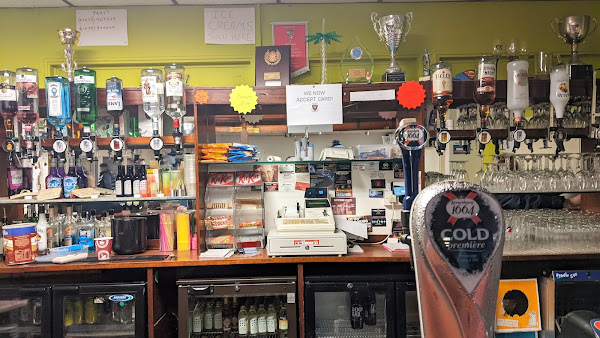 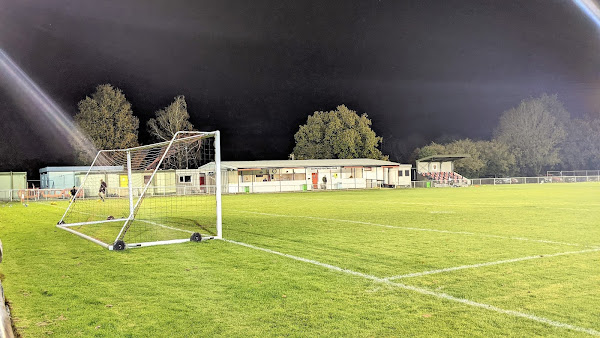 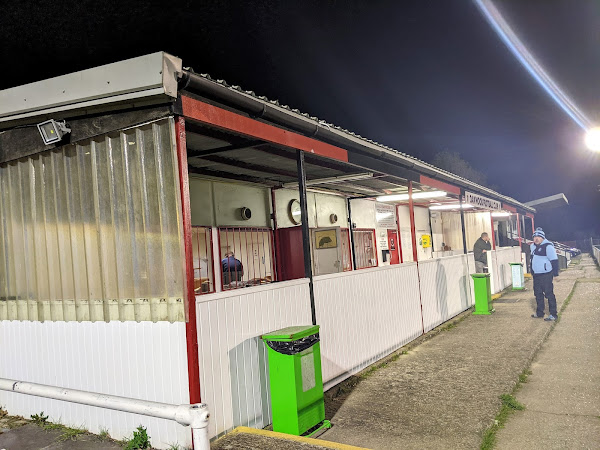 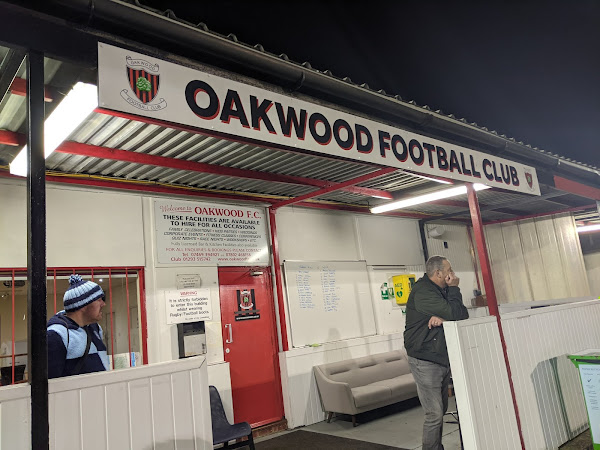 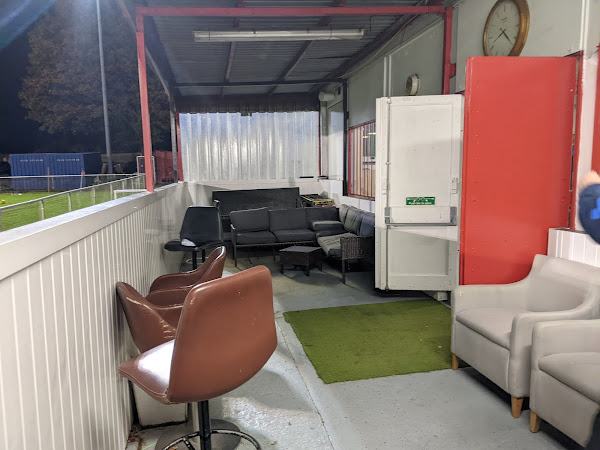 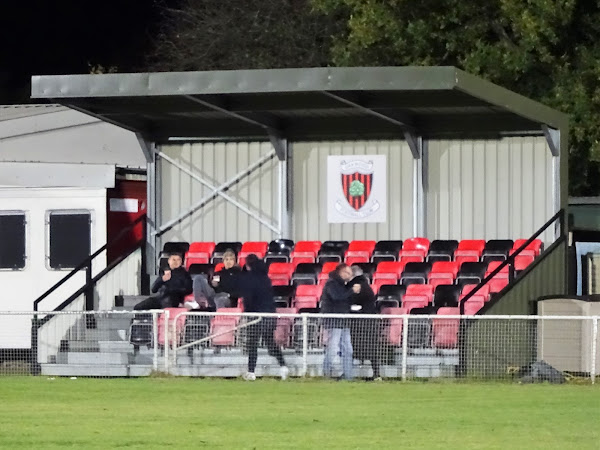 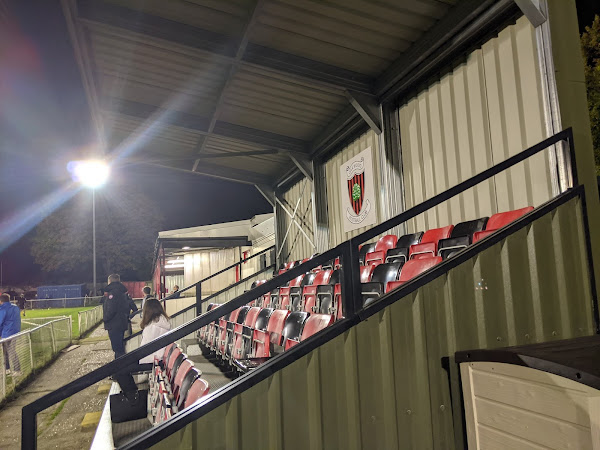 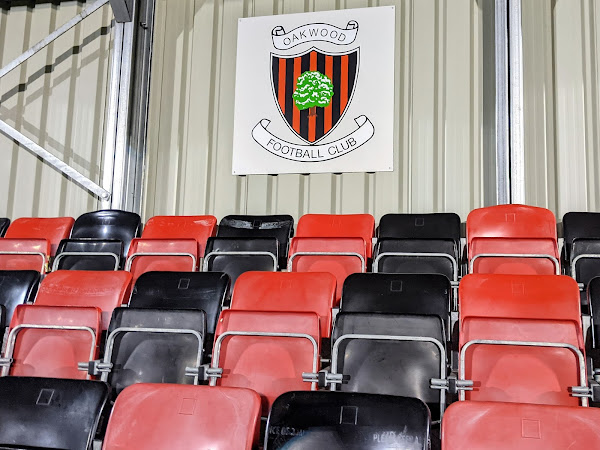 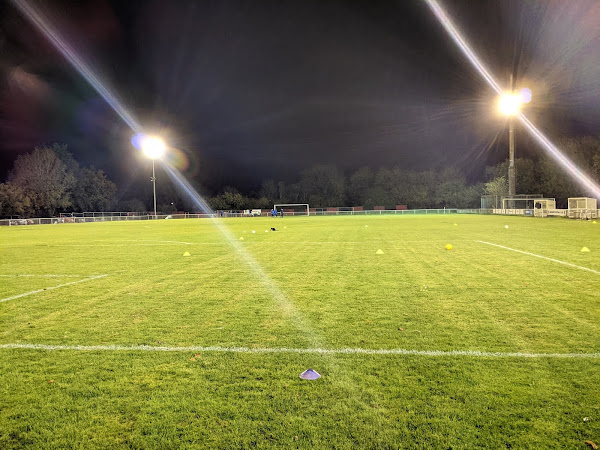 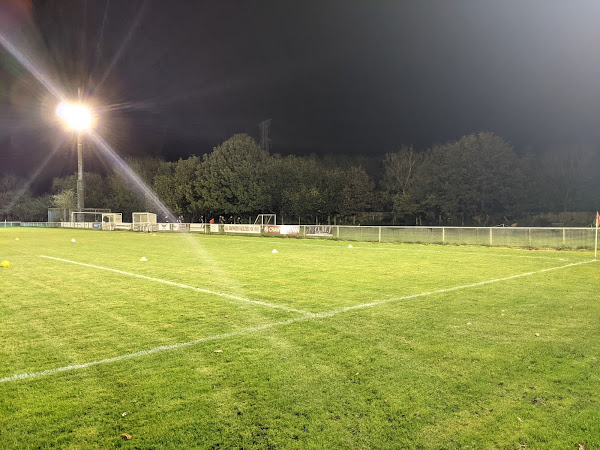 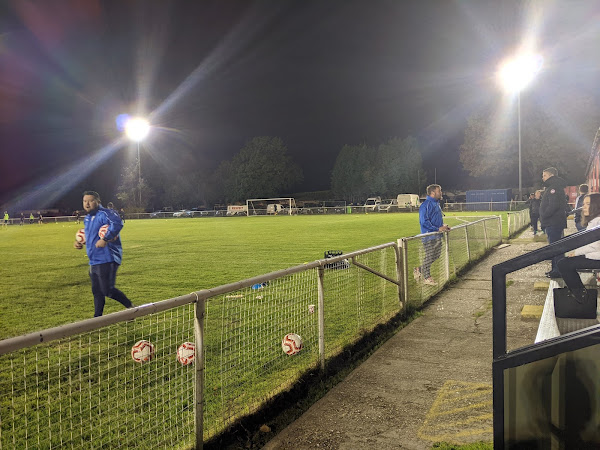