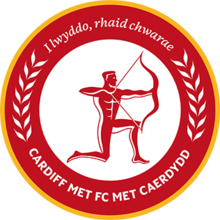 Cardiff Met Uni FC
Cyncoed Campus Stadium
Cyncoed Road
Cardiff
CF23 6XD
029 2041 6777
Official Website
Twitter
Ground Number: 1024
Friday 19th November 2021
Cardiff Met Uni 0-1 Aberystwyth Town
Cymru Premier
CARDIFF MET UNI FC - A BRIEF HISTORY
The formation date of the club is unclear, but they can trace their history back to 1972 when they joined the Welsh League (South Wales) under the name of CARDIFF COLLEGE OF EDUCATION. They would spend three seasons in Division 2 before they finished as runners up behind Blaenavon Blues to win promotion. They lifted the Division 1 title the following season to win promotion and would finish 4th in the Premier Division in 1977. Despite this, they finished bottom of the league in 1979 and were relegated, at the same time changing their name to SOUTH GLAMORGAN INSTITUTE. Fortunes varied but in 1983, league reorganisation saw the team placed in the Premier Division, though this was still the second tier in all but name. The second half of the 80s were tricky times with bottom place finishes in the Premier and Division 1 in 1987 & 1988. A further name change to CARDIFF INSTITUTE OF HIGHER EDUCATION in 1990 failed to improve things and they were relegated to Division 3 in 1992. By 1996, they had recovered, winning the Division 3 title. Another name change to UWIC followed and the following season they finished as runners-up to Bridgend Town, winning a promotion back to Division 1.
The turn of the millennium saw the club merge with Inter Cardiff, to become UWIC INTER CARDIFF. Inter were a highly successful team, finishing runners-up in the League Of Wales four times. However, a loss of a sponsorship deal due to CableTel being bought out by NTL. With the college team boasting their own facilities, it meant that they no longer had to pay the considerable rent on the Leckwith Stadium. There were teething problems though and the loss of the squad saw the team finish bottom of the League Of Wales. Relegated to the Welsh League D1, further relegations followed in 2007 to Division 2 and 2010 to Division 3. In 2012, the club changed its name to CARDIFF MET UNIVERSITY.  It was a very successful few years for the club with them winning Division 3 and Division 2 in successive seasons, before lifting the Division 1 title in 2016. Two 6th place finishes in their first two seasons were the best finishes since the merger and they remain in what is now the Cymru Premier to this day. 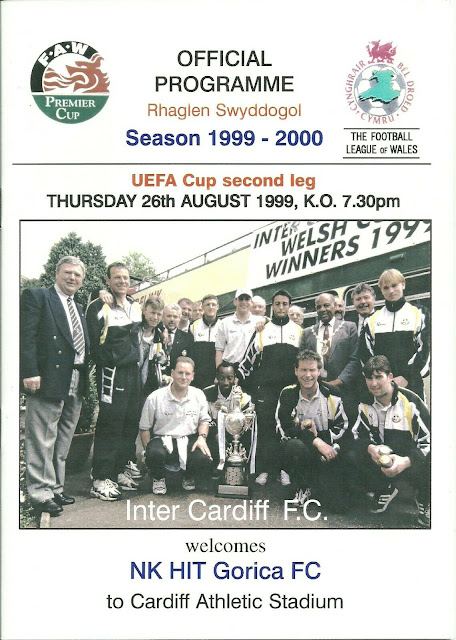 Though Inter Cardiff (then known as Inter Cable Tel for sponsorship reasons) won the Welsh Cup in 1999, the new club's best run came in 2019. Thay year they reached the semi-final, winning 4-1 at Ton Pentre in the 3rd Round, 3-1 at Aberystwyth Town in the 4th Round and 1-0 at Bala Town before they lost 3-0 to Connah's Quay Nomads in a game played at the neutral venue of Newtown.  The club were Welsh Amateur Cup winners in 1968, 1969 & 1976 and also won the Welsh League Cup in 2019, beating Cambrian & Clydach Vale 2-0 in a game played at Jenner Park, Barry.  The club entered Europe for the 2019/20 season, playing Progrès Niederkorn of Luxembourg in the Europa League. They fell at the first hurdle, winning 2-1 in the home leg before a 1-0 defeat on the road as they lost on the away goal rule. Ironically, the home leg was played back at the Leckwith Stadium, the former home of Inter Cardiff.
The university itself was established way back in 1865 as the Cardiff School Of Art, like the football team undergoing several identity changes to become Cardiff Metropolitan University. It currently has just under 11,000 students, learning a variety of subjects. Notable alumni include TV's Michael Buerk, Jill Dando & John Inverdale. 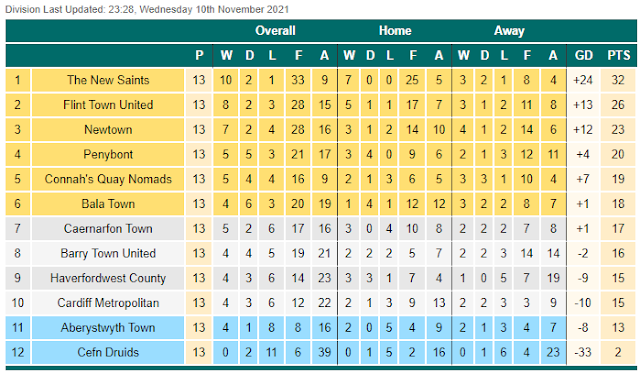 MY VISIT
Back when I went with Colin to Croesyceiliog last week, he indicated that he was keen to do Cardiff Met Uni v Aberystwyth Town this week. Though it was not on my top list, I was happy to oblige. Normally, I'd prefer something with a bit more character and to save the 3G for colder weather. However, Colin wanted to complete the top division of each of the respective British leagues and I was more than happy to help him out. It had been a quiet time since my last groundhop on Tuesday, but it was nice to have a couple of days rest. I had my car washed on Thursday, the first time since the start of the pandemic. It was nice to get the smell of nearly two years of takeaways and other assorted smells out of the inside and also give the outside a nice clean too. It took half an hour longer than expected, meaning I got home late but it only cost me £10 thanks to a special deal for staff. I did my research for my blog on Thursday night, including lining up a few options for the all-important pre-match meal. Researching the c;ub's history was very interesting and a part of blogging that I really enjoy.  My only prior experience of the club was watching Loki Doki's Football Manager journeyman series, where Harry Owen became a cult hero, at least in virtual form and travelled all over Europe with the manager. 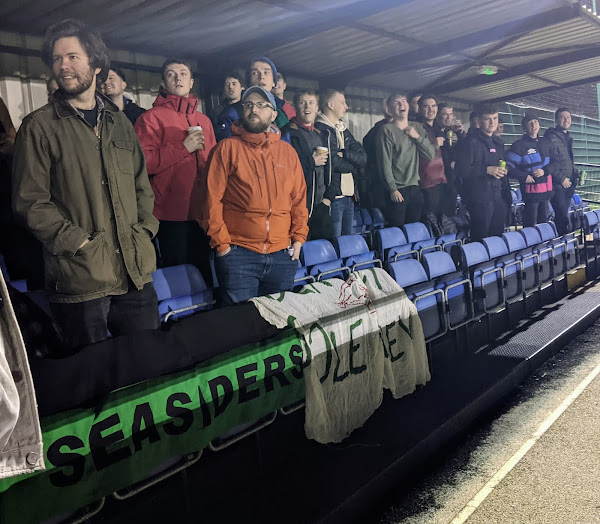 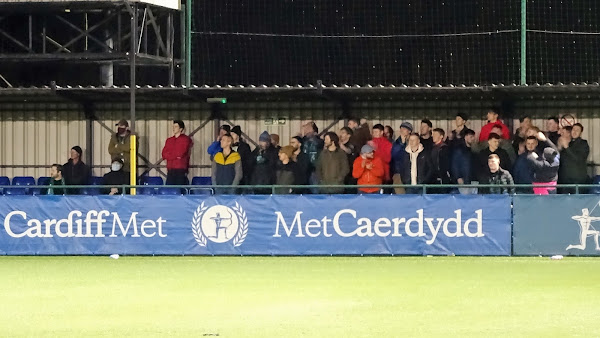 The day of the game came and as usual, it was a busy day at work, at least in terms of people crowding out the store. My own workload was more relaxed and it was a bit of an easy day, all told. There was news on the North West Counties Hop, an excellent lineup at the start of March with only Bacup as a revisit for me. I'm currently due to be in Belgium, but will certainly look at if I can shift my tickets forward to September. I left promptly at 3, but had to wait ten minutes for Colin as he had been delayed in traffic. Little did I know that an accident between a car and a bin lorry a couple of miles away had caused carnage in the local area and it took me 50 minutes to do the mile or so that usually took a few minutes. The journey went a lot better from then on but as a result of the earlier delay, we hit Bristol and Newport later than we would have liked and so suffered more delays. The late arrival ruined my chances of going to a Canadian Poutine place for a pre-match meal and also to a local Micro Pub to get some Welsh ciders to take home. The few roads with restriction-free parking were full and so, we headed to the ground. Getting there at 6.40, I paid a very reasonable 50p to park. We were both still peckish and so headed to the nearest takeaways to get something to eat. The Golden Dragon did a box meal of Chicken Curry and Chips for £6.50 and although not amazing, it was above average. We walked back to the ground, getting there at 7.30. There was a bit of a delay at the gate, as they had run out of change and so I got in for a fiver. I wish I'd picked up a programme, but as with any club, they were friendly and helpful. 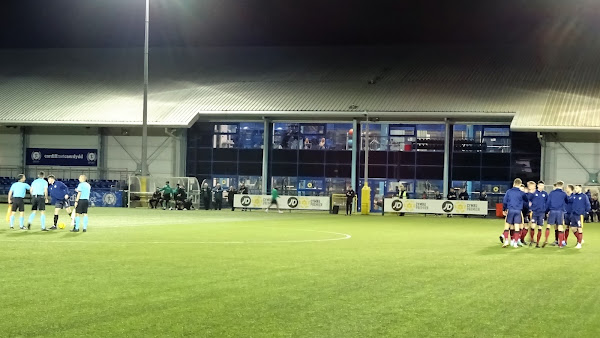 Cardiff Met Uni were in poor form and had lost their last three league games. They'd suffered a 2-1 loss at Penybont, 1-0 to Caernarfon Town and 5-0 at TNS. They had drawn 1-1 with Connah's Quay Nomads and won 2-0 at Haverfordwest in the League Cup. They sat 10th with visitors Aberystwyth Town a place lower in 11th. Aber were in slightly better form and had enjoyed a remarkable 1-0 win over leaders TNS in their latest game. They'd also won 1-0 at Saltney Town in the Welsh Cup. However, they'd drawn 1-1 at Barry and lost 2-1 to Flint Town and 3-0 to Penybont. The visitors started well and they took the lead on 9 minutes when a cross was swung in for John Owen to head home. Aber dominated the first half and were well supported. The game died down a bit in the second half but there was still a brilliant save by Alex Lang in the Students goal to tip a curling shot over the bar. Cardiff Met Uni were en route to their 4th consecutive defeat and it's hard to see on this performance when that will change. 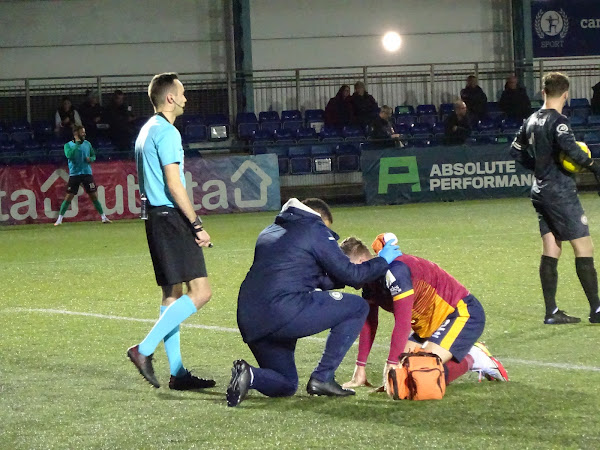 Overall, Cardiff Met Uni put in a disappointing showing, barely registering a shot of note. Aberystwyth should have had more and played well, backed by brilliant vocal support from their travelling fans. The attendance was a very respectable 353 and a good advert for Friday night football. We left around 9.45 and I'd loved to have gone to the Cathay's Beer House to pick up some goodies to take home, but it was too close to their closing time of 10 PM. As with the journey to the game, the journey home didn't get off on the best note. A sizeable section of the M4 was closed, the diversion wasn't very well signposted and Waze was little helped. After a tour of the back streets of Wales, Google Maps got us on our way. From then on, it was plain sailing, though the bit of the journey on the speed restricted M4 dragged a bit. I eventually dropped Colin off at 12.30. My compatriot didn't stop jabbering from the moment I met him to the moment I dropped him off. Not that you would guess that from his lack of communication over WhatsApp during the week. However frustrating he is, he has a heart of gold and I'm glad to have him as my hopping pal. I got home myself ten minutes later. The day had not been what it initially promised, but it had still been a good one. I had a couple of ciders whilst I watched TV and typed my blog, going to sleep around 3 am. 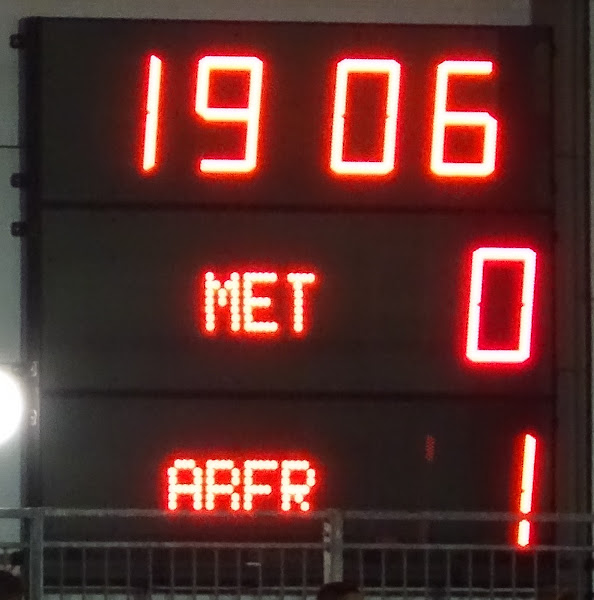 THE GROUND
CYNCOED CAMPUS is hardly the most inspiring venue but it does the job. The side where you enter has an imposing building which has a couple of banks of seats. Opposite is the all too common metal stand and aside from this, the rest of the ground is open hard standing. I'd estimate a seating capacity of around 350 and an overall capacity of 2,000. At the ground is a tea bar offering a basic range of burgers, snacks and drinks. Around 10 minutes walk away is a pub, a chip shop and a Chinese takeaway. The Golden Dragon is decent without being exceptional. 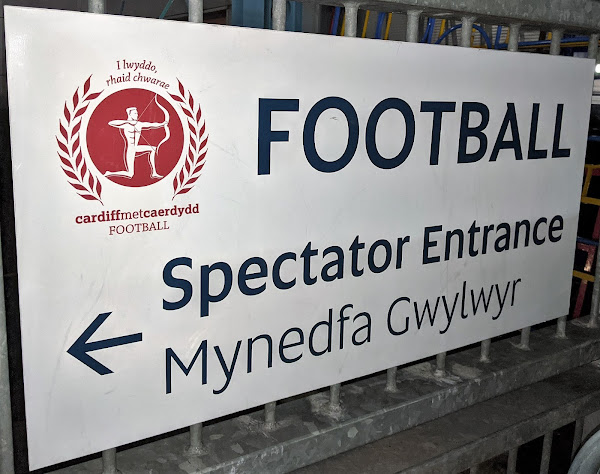 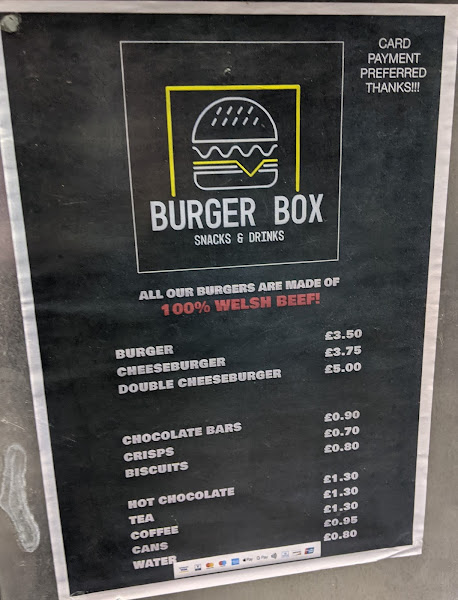 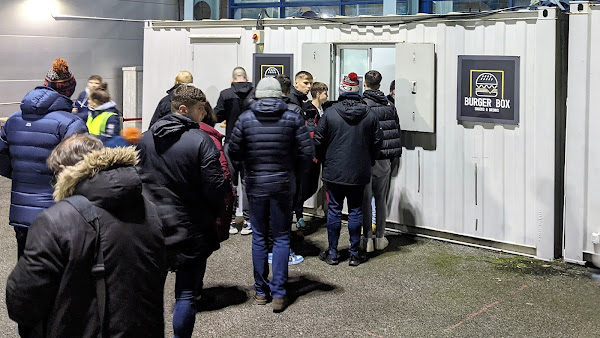 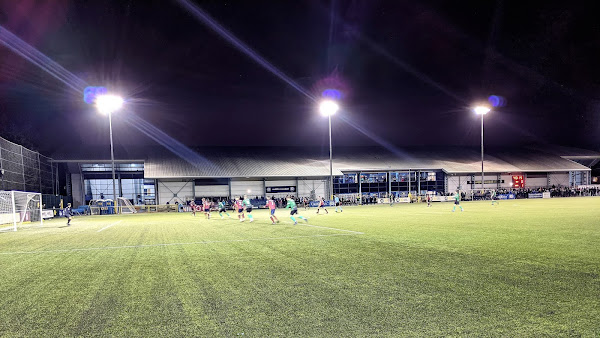 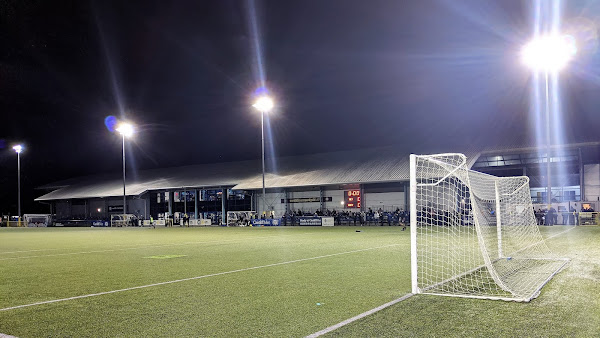 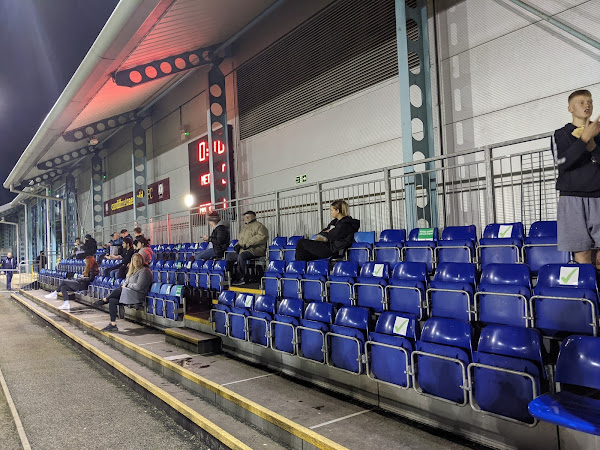 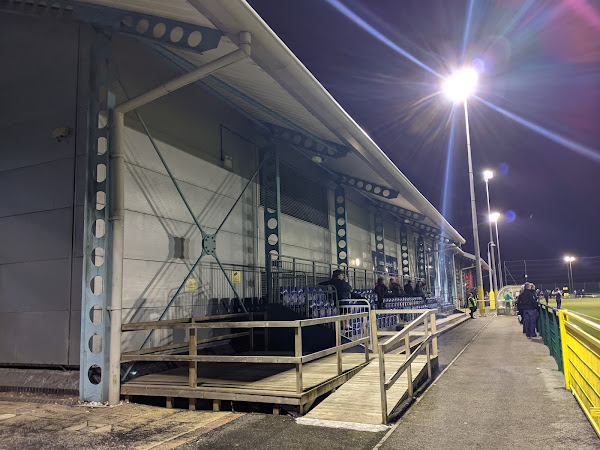 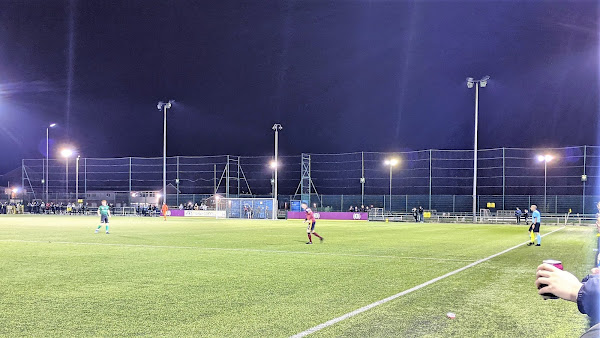 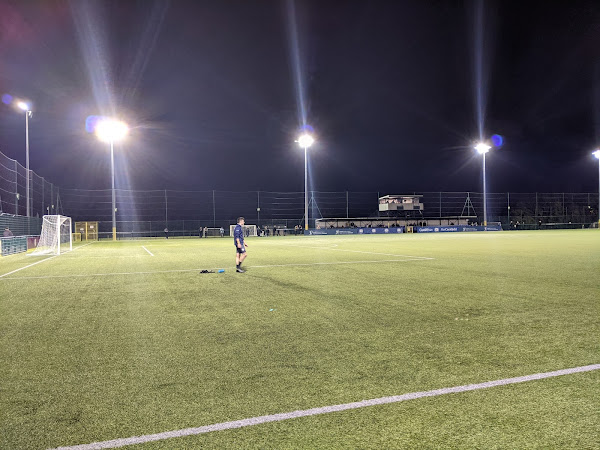 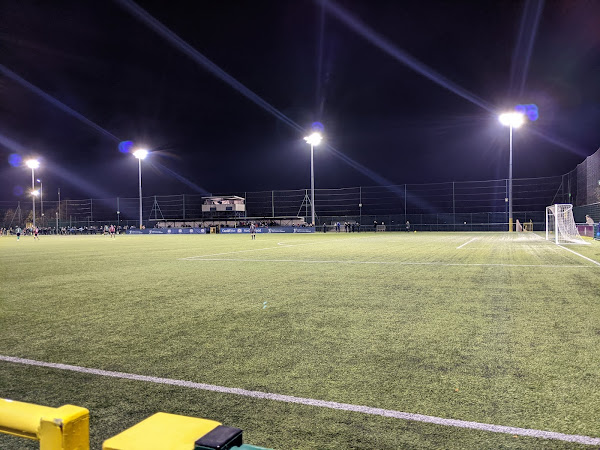 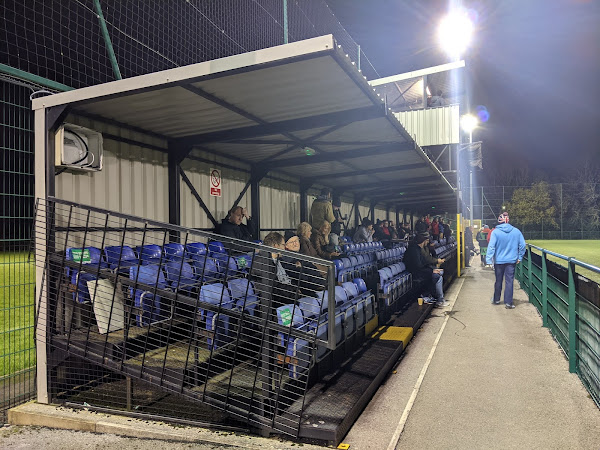 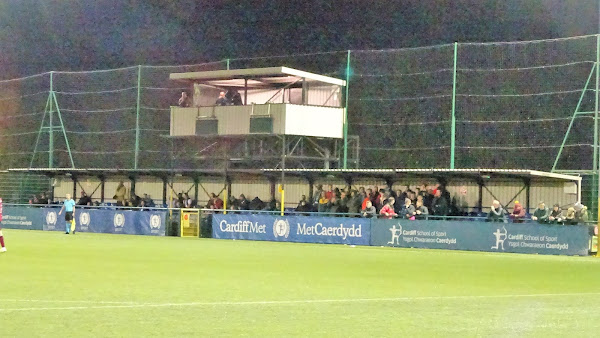 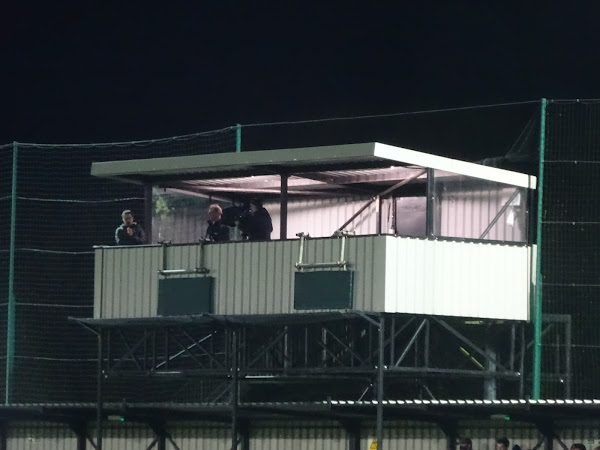 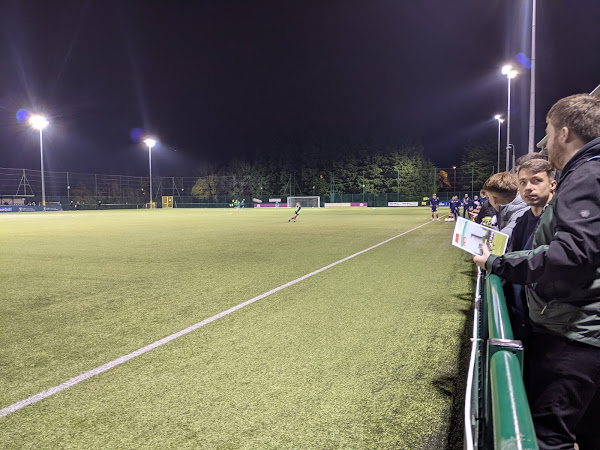