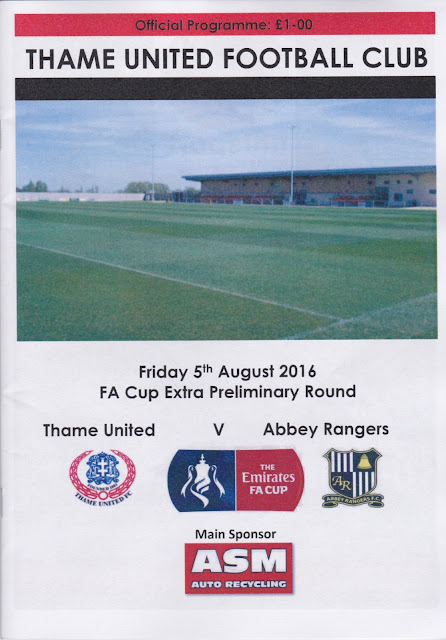 Thame United moved into the ASM Stadium in January 2011, opening it with a game against Football League side Oxford United. The hosts might have lost 3-1 but the crowd which numbered a record 1,382 will have given them a good financial start in their new home. They have been in the Hellenic Premier ever since and have attained a respectable league placing in each of their seasons, ranging from 5th in 2015 where they gained their record points haul of 69 points to 10th in both 2011 and 2014.

The FA Cup has seen them reach the FA Cup 2nd Qualifying Round in their first full season at their new home. After defeating current Conference North side Brackley Town in the first qualifying round, they lost 3-1 to local rivals Oxford City. Last season saw their best FA Vase season since moving in. There were goals galore in the first 2 rounds with them beating Frimley Green 7-2 and Bridon Ropes 4-3. A more sensible scoreline greeted them in the next round as they beat Pagham 3-0. The 3rd round proved their limit though, as they were knocked out 2-1 by fellow Hellenic Leaguers Kidlington. 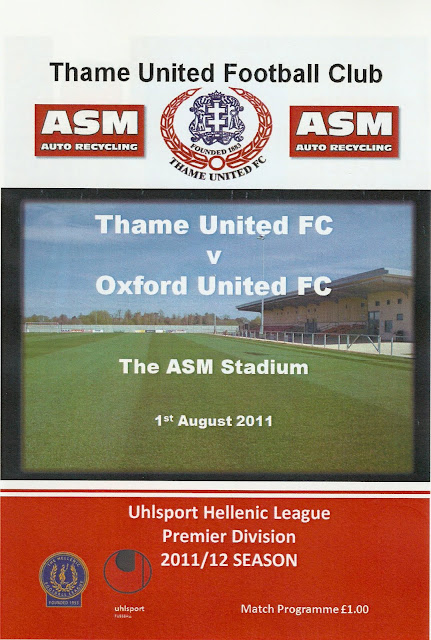 As Wycombe had no friendly planned for this random Monday night I took the opportunity to go with a few mates to see Hellenic League side Thame United play an Oxford United XI.

The game I sent to was a typical pre-season affair, with neither side really breaking sweat. Oxford's side was comprised of mainly youngsters with the odd first teamer like Simon Heslop thrown in for good measure. Thame took the lead and had further chances to extend it, despite Oxford having the better of the game. Oxford equalised about 10 minutes from time, probably the right result in the end, given the balance of play, and decent enough value for the £6 entry, even if it wasn't the best game I've seen. 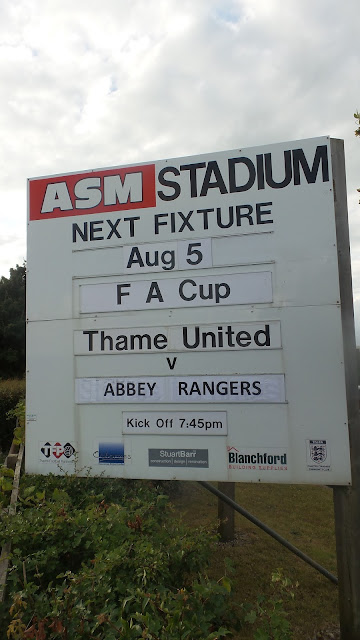 As regular readers know, I am a huge fan of both the FA Cup and Friday night football, so it was inevitable that I'd be going to a game tonight. The only game at a new ground tonight was Lymington Town but they were playing their game at Bashley. I'm keen to avoid games where the landlord is not the home team if I can, especially in this case when I knew a decent lad called Sheridan who was a big fan of Bashley. So a revisit was in order, and out of all the choices on offer, Thame United was the closest at just over 15 miles away. It was also the only one that I'd not visited since I'd started this blog, so it only had a brief entry. Another Twitter user - the excellent @FACupFactfile had also chosen to go to this game, and I was hoping that Thame United would do well with a decent influx of 'hoppers' likely to turn up.

It was yet another easy day at work on the day of the game, with me getting out just after 10 for the second day in a row. Though I was enjoying the much-needed extra free time, it had been an expensive month for me and I couldn't afford for it to carry on for too long. I came home, and had a bath before having a bacon sarnie for lunch. I had more expense in the afternoon, going down to get a computer desk for £50 from Staples to use in my new setup. I came back and started preparing my blog for tonight's game. After a dinner of home made burgers, I got my things together, leaving home at around 6.30. 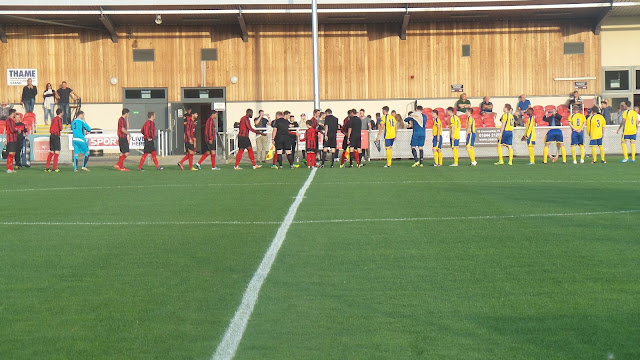 I got to the ground at 7.10, getting some pictures of the outside before going in the bar.  On discovering that they only had common ciders I went in the ground,  paying a pocket-friendly £5 for entry plus £1 for a decent programme with plenty to read in it.  I chatted to a hopper from Bristol who I'd seen a couple of times last season while I waited for kick off. I took up my favourite position of between the dugouts with 5 minutes to go and waited for the teams to come out. 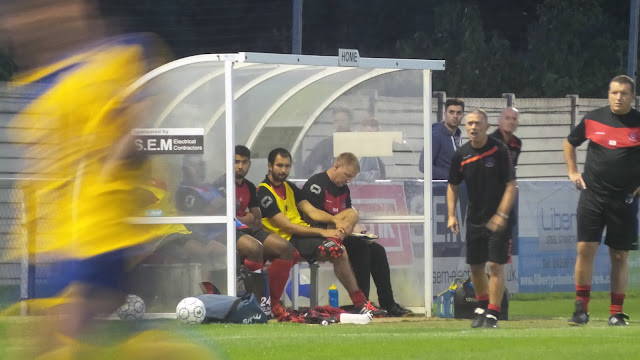 Thame,  being the home side and finishing last season in a higher placing were firm favourites for the tie and they set about establishing their superiority early on. They had the first real chance of the game on 5 minutes as a great cross was put into an unmarked Thame forward, however, he conspired to blast it over the bar. This was much to the frustration of home manager Mark West who would have buried the chance in his prime at Wycombe. Abbey Rangers had a shot cleared off the line on the break before Thame took the lead on 10 minutes. Lynton Goss, who had played for Aylesbury in the Southern League last season unleashed a fizzer of a shot from outside the area which flew in the net to give the hosts the lead. The visitors thought they had equalised on 18 minutes, but Nick Ford's header from a looping cross was ruled out for offside. The same played cracked a superb volley on 25 minutes that deserved to go in, but Thame keeper  Henry Craven was equal to it, superbly tipping it around the post to keep his steam ahead. His opposite number was in good form also, saving from close range when Thame looked certain to score. The hosts were having a good spell at this point and they doubled their lead on 42 minutes when Andy Gledhill headed in after a few goalmouth scrambles. 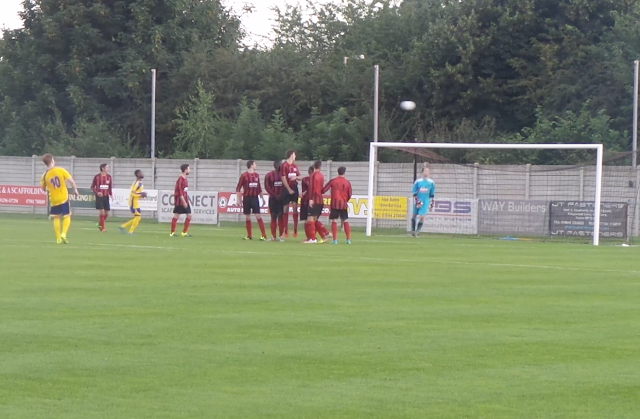 Just before half time Thame keeper Craven came rushing out to the edge of the area and handled just outside of the box. Hawk-eyed referee John Perry who had a good game all night spotted this and booked the keeper as well as awarding the visitors a free-kick, right on the edge of the area. Danny Hartlebury's effort was not too far over, but his team went into the break 2-0 in arrears, which was maybe a tad harsh given the balance of the play. The second period started with a clutch of half chances without either keeper really being tested. The hosts had a chance to make it 3-0 on 65 minutes after they were awarded a penalty, but it was blasted wide. However, they were not to be denied for long as Lynton Goss grabbed his second and his sides third on 70 minutes. Visiting keeper Liam Stone got something on it, but couldn't prevent it creeping in. 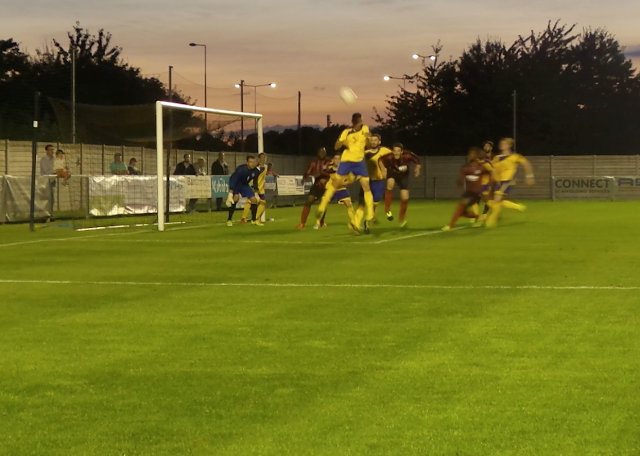 It was well deserved for Goss, who was the best player on the night. The rest of the game played out with good intent, but both sides seemed to be content with the scoreline. The attendance was announced as 141, which some Thame fans seemed pleased with, but I can't help thinking that a good game and a great club deserved more. A large chunk of the crowd were hoppers and other non-Thame people and although there was some support from the town, the people of Thame need to put Coronation Street on Sky Plus and come and support their town in the greatest competition in the world. I for my part, left in good spirits. I was home shortly after 10, spending the rest of the evening relaxing with a couple of ciders and writing this blog. Later I studied the scores on the Real FA Cup website and was content that I'd made the right choice with tonight's game.

Thame United moved into the ASM STADIUM in 2011, after a long period of exile. The ground is situated around a mile from Thame town centre where there are a fair range of pubs and food places. There us a bar at the ground which is quite plush, but the drinks range akin to the usual clubhouse selection. There was also a tea bar, though I didn't indulge on either of my visits. 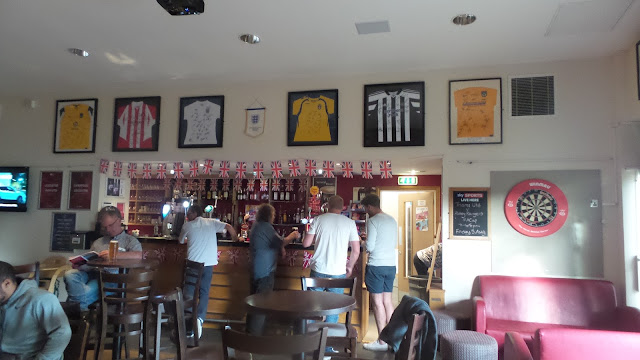 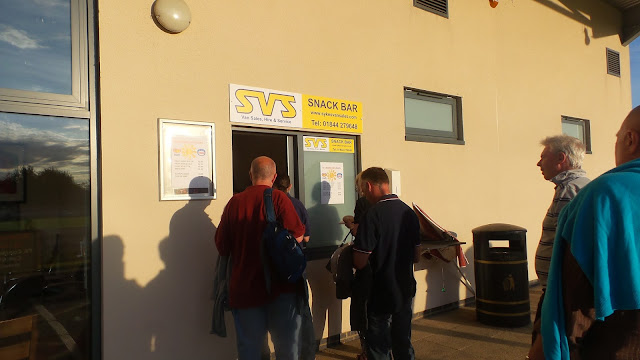 The only covered area is an impressive looking stand, with a seated capacity of around 150. It looks very smart, though practically, it is set way back from the pitch which makes for a strange view. The rest of the ground is open to the elements and flat standing. There are also 3G pitches for hire and a fair amount of parking too.It's a smart, modern well-designed ground with plenty of scope to expand should Thame progress on the pitch. 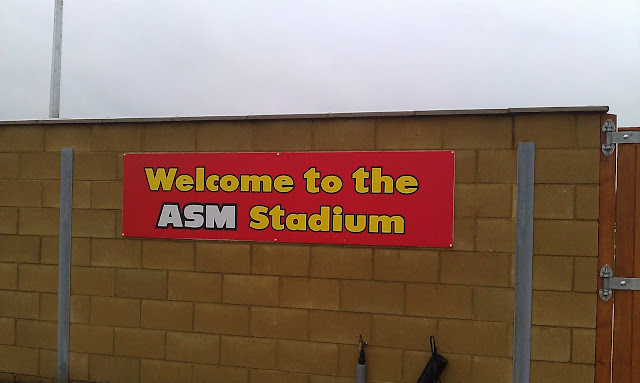 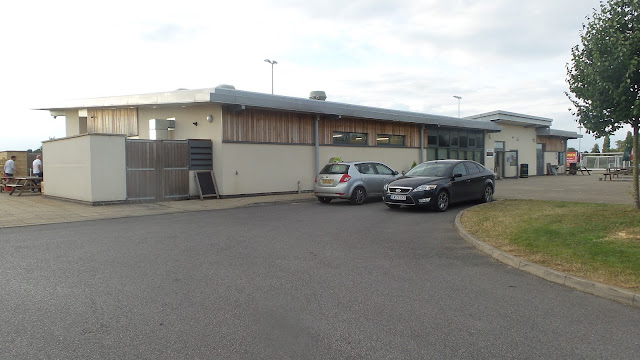 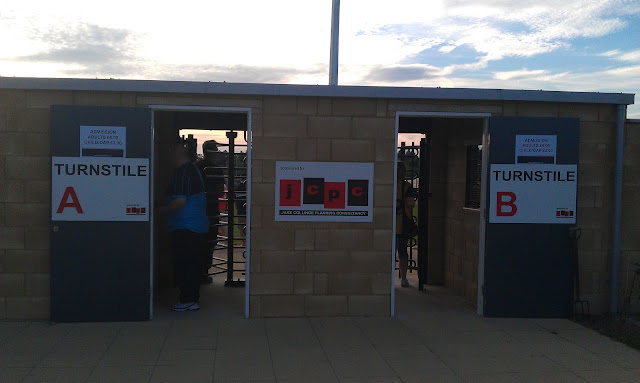 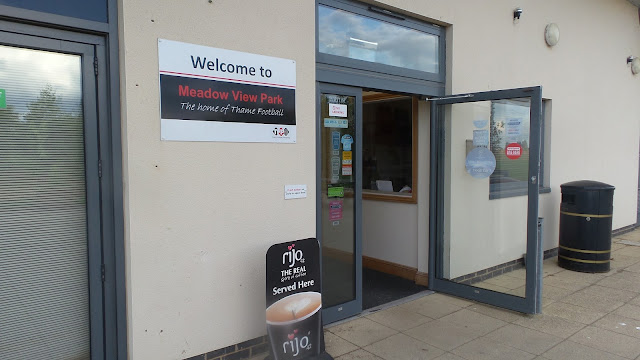 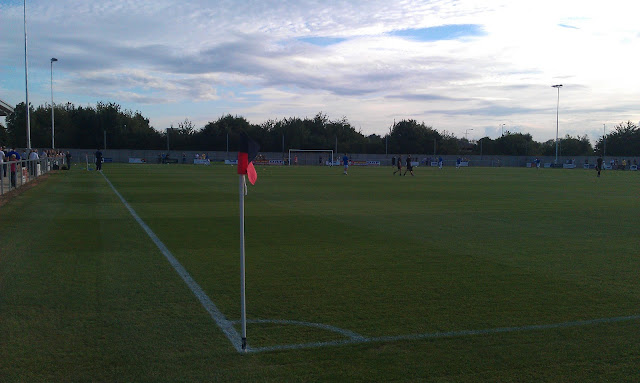 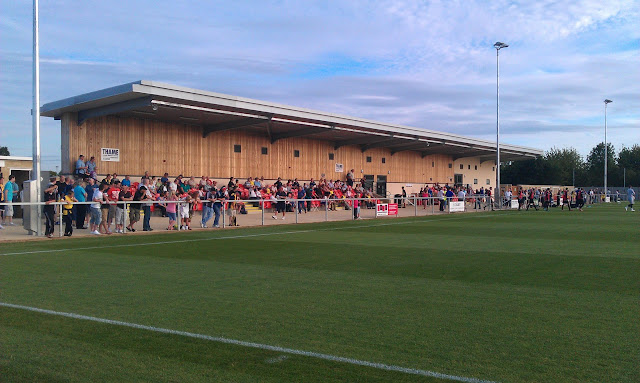 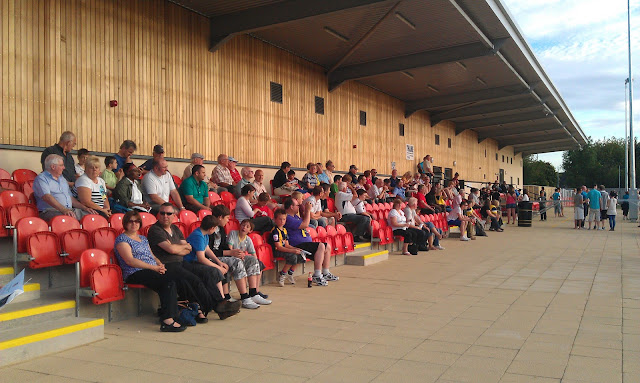 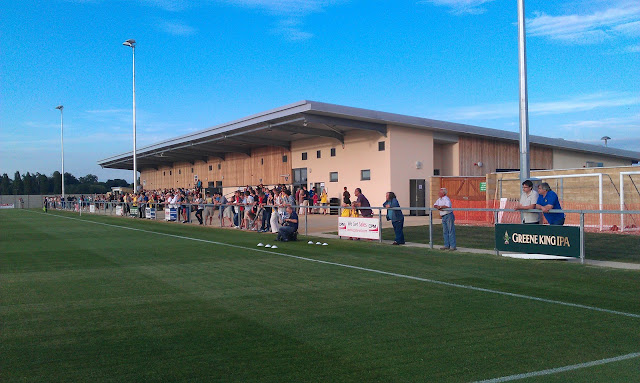 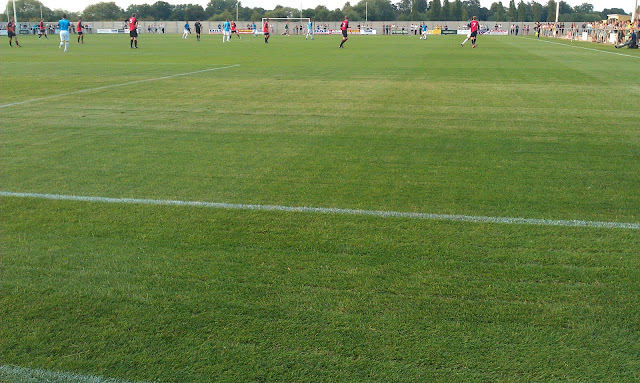 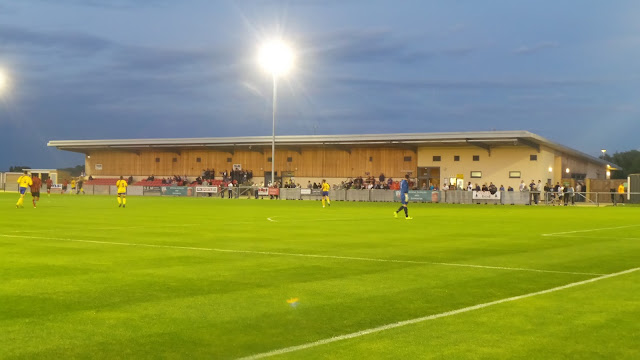 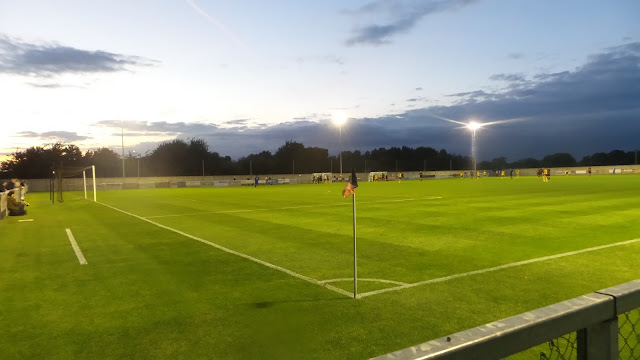