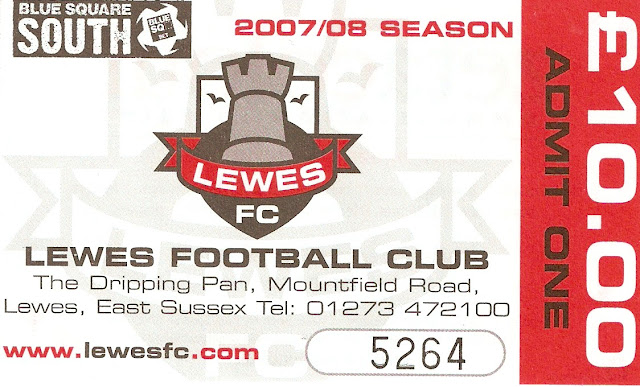 The club was established in 1885. They joined the East Sussex League as founder members the following year but finished bottom four seasons in a row before leaving in 1901. The next stop was the Mid-Sussex League and had a little more success here finishing as runners-up twice before winning the league in 1911 and again in 1914. After the first world war, they joined the Sussex County League as founder members in 1920. They'd remain here for 45 years, finishing as runners-up four times before winning the title in 1965. They then joined the Athenian League, finishing as Division 2 champions in 1968 and as winners of Division 1 two years later. They'd remain in the top tier Premier Division until 1973 when a load of clubs left to join the Isthmian League and the Division was abolished. Lewes themselves joined the Isthmian League in 1977, playing in various divisions. A low point was 1995 when they finished second-bottom of Division 3 but things soon improved with them winning Division 2 in 2002 and Division 1 South in 2004. The latter win saw them promoted to the newly-formed Conference South after winning through some playoff games against Yeading, Basingstoke Town & Kingstonian. They finished in the playoffs in their first two seasons but were unable to take part due to lack of facilities. With those issues addressed, they won the league in 2008 and spent a single season in the Conference Premier, finishing bottom, mainly due to manager Steve King and his players walking out following the league win. They suffered another relegation in 2011 and despite finishing 6th upon their return to the Isthmian Premier in 2012, suffered another relegation in 2016, following a series of poor finishes. A couple of seasons were spent in Division 1 South before a runners-up spot in 2018 was good enough for a return to the Premier Division where they remain to this day.

The club has made it to the 1st Round of the FA Cup on three occasions - losing to Stoke City in 2001, Darlington in 2006 and Mansfield Town in 2007. In 2004, they reached the FA Trophy 3rd Round. After beating Dunstable Town, Northwood and Cinderford Town prior to an epic 8-5 defeat to Weymouth. The FA Vase Quarter Final was reached in 2002 when they beat Alton Town, Wantage Town, Oakwood, Hornchurch, Hallen, KIdsgrove Athletic and Tow Law Town prior to a 2-1 defeat to AFC Sudbury. Local cup wins include the Sussex County League Cup in 1939, the Montgomery Cup twice, the Sussex Senior Cup five times, the Sussex RUR Cup on three occasions, the Sussex Floodlit Cup in 1977 and the Supporters Direct Shield in 2013. The town of Lewes has a population of just under 17,300. The most well-known person to come from the town is the recently deceased (at the time of updating this blog) Honor Blackman.

My one and only visit to Lewes came in January 2008, but with some decent photos taken and a brief write-up done on my former blog, it was another that I was going to tackle during the large amounts of time I had to spare during the 2020 Coronavirus pandemic. At the time, I only really visited grounds to get photos and with Lewes one of the few within a reasonable distance that I'd not been to, I went for that. If I recall correctly, I went with my workmate and fellow Wycombe fan Paul. This was towards the end of my seven-year spell of not missing a game, home or away but Wycombe didn't have a game with it being FA Cup 3rd Round day. We'd been knocked out in the 1st Round thanks to a disappointing home defeat to Swindon Town, We'd supposed to have been going to Bury that day, but they'd got Norwich in the FA Cup, eventually beating them. We must have left sometime in mid-morning and on the way down called in at Cobham, Bookham, Horley Town, Redhill, Hassocks, Ringmer, Chipstead, Three Bridges, Merstham and Burgess Hill Town. Merstham was the most impressive, at the time they were in the Combined Counties League and would eventually rise to the Isthmian Premier. Bookham was the least impressive - just a field basically and they ground shared for a bit before dropping down to the Surrey Intermediate League. Since starting groundhopping properly, I've managed to get to all but Ringmer and with that ground due to go soon, I hope to get there before it goes. 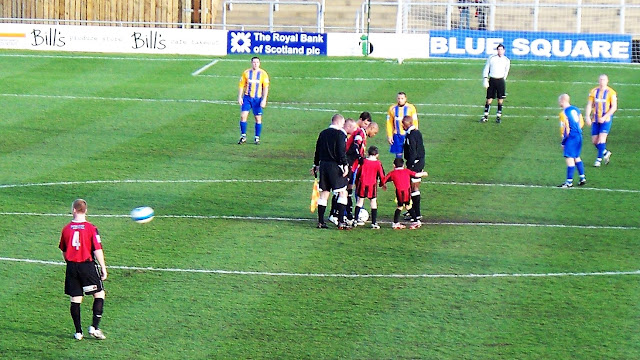 We must have got there around 1 and I have to say I was impressed - it's a nice setup and a friendly club. I recall having to pay for parking as it was right near the town centre although I don't recall exploring the area like I'd be keen to do nowadays. Lewes had ex Wycombe players Steve Williams (goalkeeper) and Ian Simpemba (defender) playing for them, both progressing from the youth team to the first team with Williams probably being the most impressive. Basingstoke Town had sold Sergio Torres to Wycombe a couple of years previously, but they didn't have any former Wanderers in the side, though they had former football league player Chris Tardiff in goal. Lewes were in good form and were nine points clear at the top of the table. Basingstoke were sitting in 8th, a decent position for them, but they'd not been in the greatest of form. The visitors matched their high flying hosts for the opening period, but on 13 minutes, Lewes took an expected early lead. Simon Wormull played in Andy Drury down the right and his square ball presented Paul Booth with an easy chance to tap home. The rest of the half saw few chances but Lewes did have a goal disallowed just before half time. It was Drury and Wormull who combined again to make it 2-0 with the latter curling home from the edge of the area although Basinsgtoke keeper Tardiff would have wanted to do better. It was all one-way traffic from then on and Basinstoke's cause was not helped then they had Jamie Whisken sent off. That was before Wormull again and Matt Groves added 2 late goals to give the scoreline a one-sided look. And it was no less than Lewes deserved, as they demonstrated why they were favourites to win their league this season.

The delightfully named DRIPPING PAN is a pleasant ground and well worth a visit. It's a unique bowl setup with a stand holding around 500 sat at the summit of the bowl. There's also a covered terrace at the end where you enter through the turnstiles, this holds around 1000 with a slightly smaller uncovered terrace at the other end of the ground. The rest of the 3000 capacity is a made up of open standing around the edge of the pitch with the bank officially out of bounds. Food and drink facilities at the ground are said to be decent, although I can't recall much from my visit. It's on the edge of a pleasant town, with limited parking at the ground but plenty available in town, though it will cost. There's also a train station and plenty of pleasant pubs, though none stood out especially when I did my latest research. 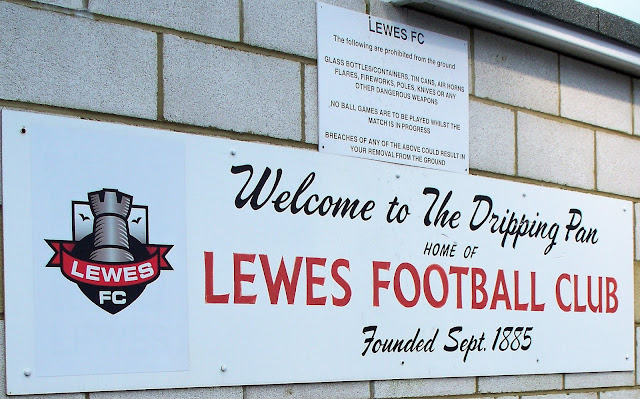 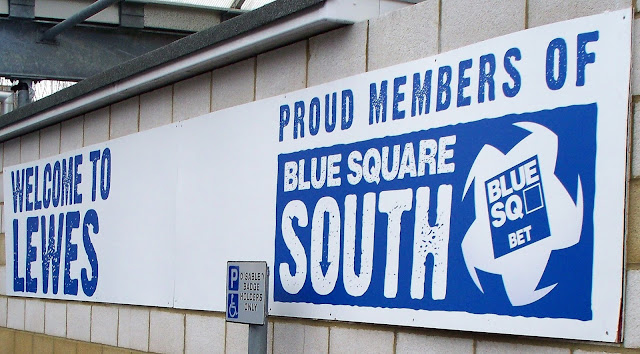 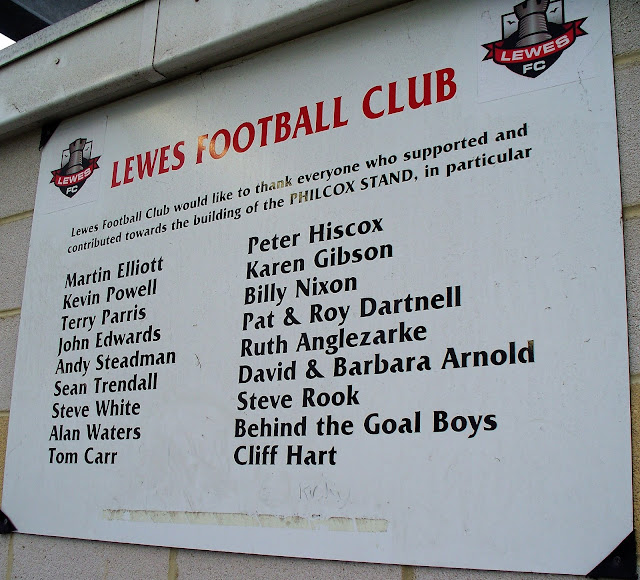 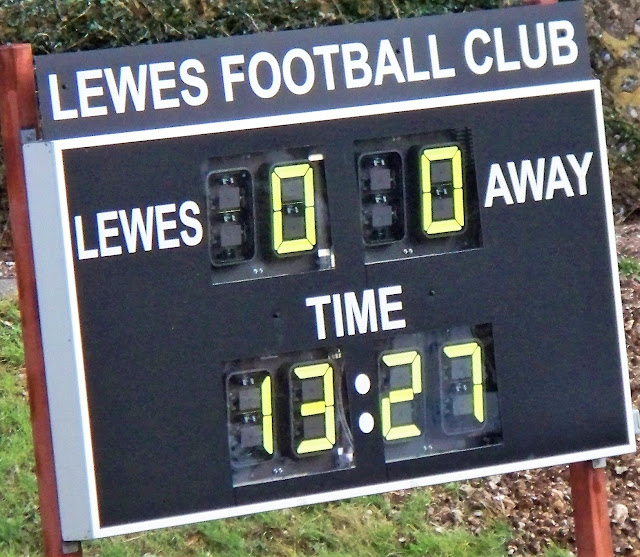 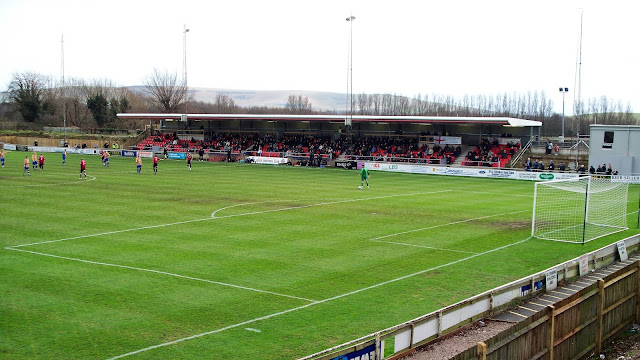 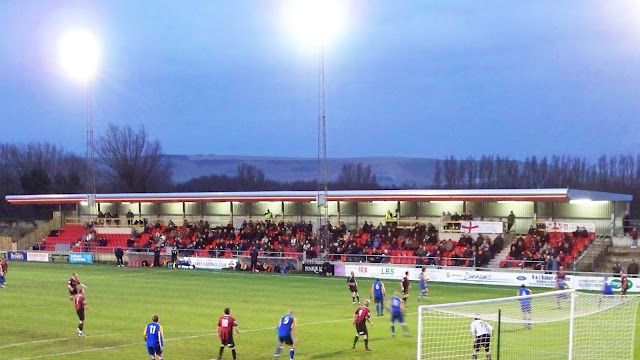 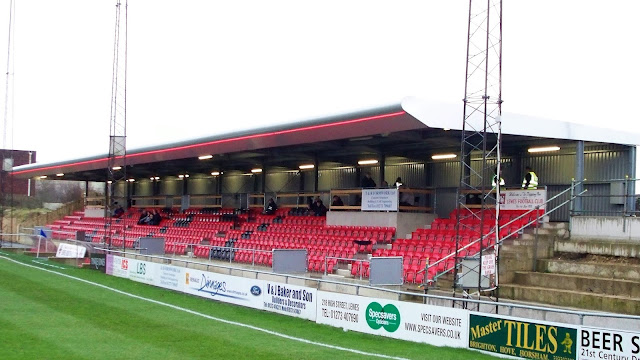 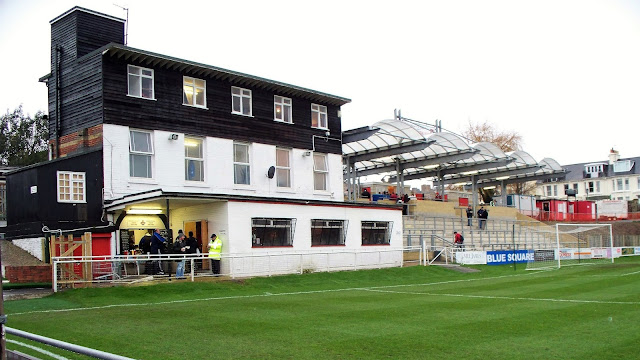 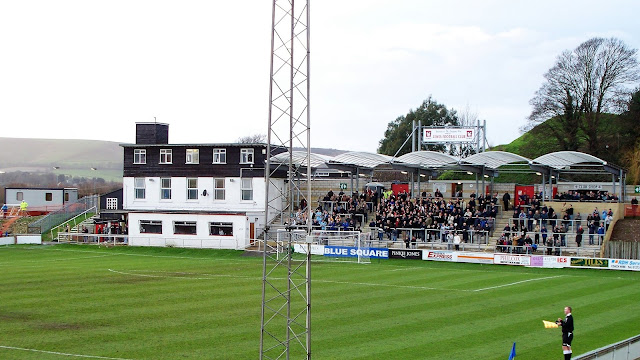 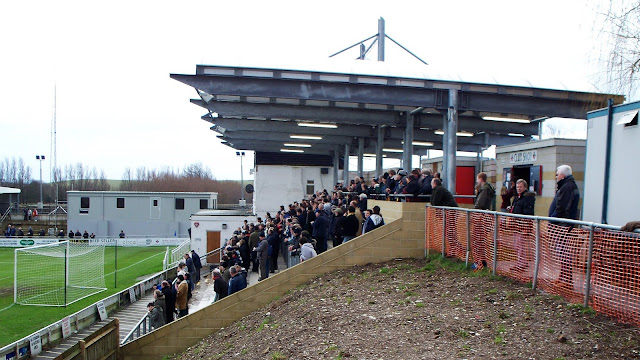 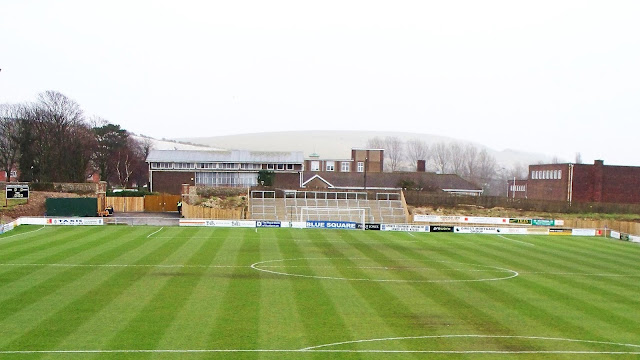 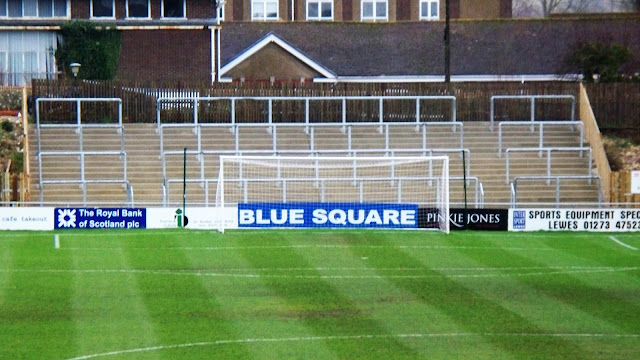 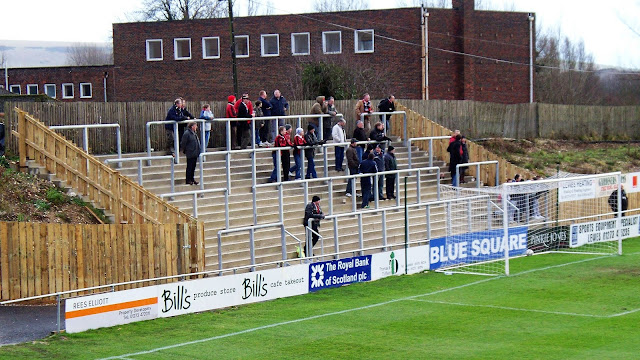 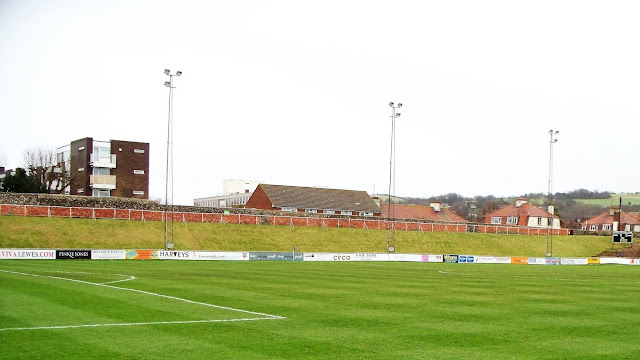 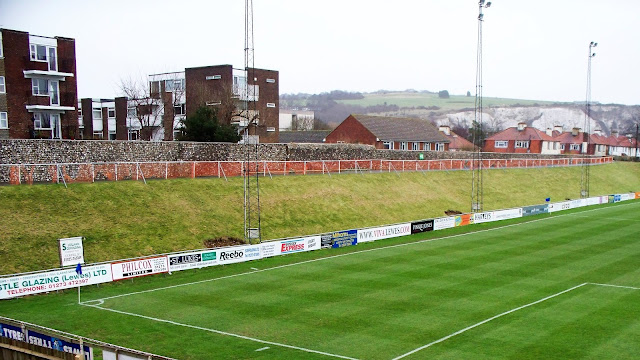