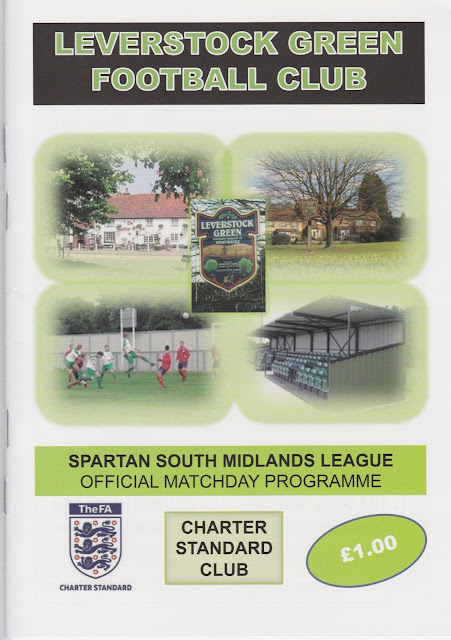 The club was established as far back as 1895 but for the first 95 years of their history, they played in local leagues such as the West Herts and Herts Senior County League. During their 36-year spell in the latter and finishes ranged from an all-time low of  13th out of 16 in Division 2 in 1969 to the high of runners-up in the Premier Division in 1991 when they finished behind Potters Bar based side Mount Grace. This won them promotion to the South Midlands League which remains their home to this day, albeit in its modern form following the merger with the Spartan South Midlands League in 1997. A couple of seasons were spent in the Premier Division and despite top-half finishes, they were demoted to the second tier in 1993 due to lack of floodlights. They'd spend ten years at the lower level, winning promotion back up in 2003, following a 4th place finish. Despite a close call in 2014 when they finished 20th, narrowly staying up, they finished as high as 4th in the Premier Division in 2011. Finishes have tailed off since that high, though Leverstock Green did finish 7th last season after a series of lower-half finishes. This season sees them with a good chance of matching that, sitting in 10th at the start of play, but with games in hand on other sides.

The FA Cup 2nd Qualifying Round has been reached twice, firstly in 2014 when they lost 5-0 at Staines Town and then again this season as they gave Dorking Wanderers a good game before going down 4-2.  The 2010/11 season saw a great run in the FA Vase with Welwyn Garden City, Enfield, Hullbridge Sports, Tunbridge Wells & Bemerton Heath Harlequins before a 2-1 defeat to Rye United in the 5th Round. This season saw a record 10-0 win over Unite MK in the 1st Qualifying Round of the same competition, however, they exited the competition at the weekend with a heavy 5-1 defeat at Histon. Local cup wins include the Herts Charity Shield in 2007 and 2011, the Frank Major Trophy in 1991 and 1992 and the St Mary's Cup in 2018.  The most well-known player to play for the club is former QPR striker Kevin Gallen who scored 1 goal in 5 games during the 2011/12 season. Leverstock Green itself is a suburb of Hemel Hempstead which lies to the east of the town, with some residents suffering damage to their properties due to the 2005 Buncefield oil explosion.  It is a small village but has a number of local shops and other amenities. 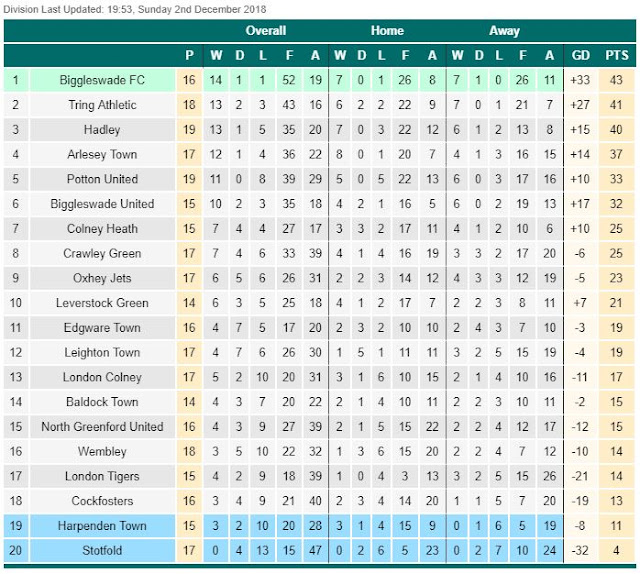 Leverstock Green was one of the more local grounds that I had not done and with me getting quite a lot of the Spartan South Midlands League completed, I was keen to visit when the opportunity arose. Fellow hopper Anwar was also keen to visit and so when the chance came to do a Thursday night game in mid-March we jumped at it. The mid-March weather should be a bit warmer than it was for some of our earlier games and it would be a financially economical one to do, with me being able to eat at home as well to save money. Leverstock Green are based near Hemel Hempstead in Hertfordshire and although I have known of their existence for a while I had only been to the town's bigger club, Hemel Hempstead Town for a game, back at the end of the 2011-12 season. I had however been to the delightfully named Pancake Lane to take a few pictures on a non-matchday around 5 years ago. I suppose I should have visited on Shrove Tuesday given its name, but on that day I went to Kidlington instead. 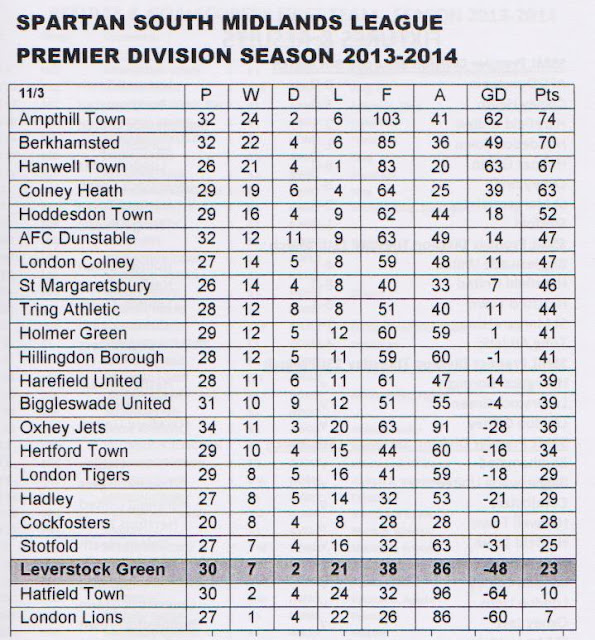 The day of the game didn't start too brilliantly with me oversleeping. I must have turned the alarm off and thought I would grab a cheeky few extra minutes and before I knew it, it was an hour later. I looked in confusion at the clock and wondered why it said 5.20am and doubled checked my phone. The clock on there confirmed my worst suspicions and I had to rush to work bleary-eyed. Thankfully it was quite an easy day and I caught up with the 50 minutes that I had missed. When I got home I had a bit of a chill and some lunch and also finalised my blog from last night's game in Cheltenham. I then had a bath and had some dinner before leaving home. Before I did though I moved my clock over the other side of the room so I would have to get out of bed to turn it off, thus avoiding a repeat tomorrow. It must have been the first time in about a decade that I had overslept and having been a bit tired the last few weeks I was really looking forward to my week off at the end of the month. I picked Anwar up in Aylesbury at 6.15 and we chatted about retro games and football for the short 30 minute trip to Leverstock Green. After paying to get in and buying a programme I had a look around the ground, grabbed some pictures and checked out Facebook. I had also found out during the journey that Anwar would be going to Cheltenham next Tuesday, so I would find something fairly local to me and probably somewhere southwards in the opposite direction to where he lived. It was soon time for the earlier than usual 7.30pm kickoff. 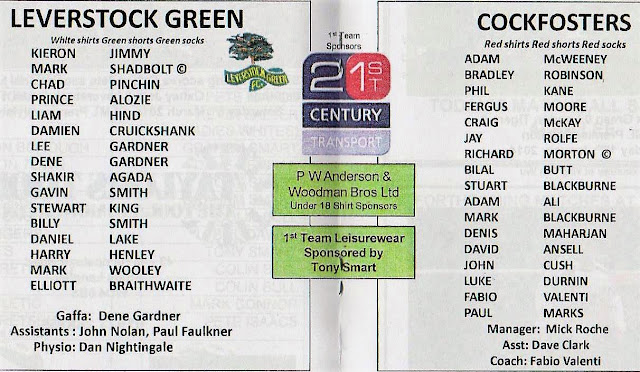 The game started slowly with both sides having half chances but not really testing the keeper. It was scrappy and it was a close-range finish that gave Cockfosters the lead on 22 minutes. The most amusing moment of the opening half hour was the referee getting whacked in the head with the ball, but thankfully he wasn't hurt. Shortly after Leverstock Green had their first real chance of the game when a free kick was headed off the line. A few minutes later Cockfosters broke and extended their lead with a low shot from the edge of the area. It stayed that way until halftime. The second half was a bit livelier with visitors coming closest early on. But then after a spell of pressure, Leverstock pulled one back when a shot hit both posts, came out and the rebound was put away. A minute later it was all square with another close-range finish, similar to Cockfosters first goal. Cockfosters players were rattled by this with the home side coming back into it more and making it a proper contest. The visitors took back control of the game and had a good spell of pressure. However, it was was the home side that looked to have completed a great comeback by scoring an 85th-minute header to make it 3-2. There was a mini scuffle a couple of minutes later as Cockfosters tried in vain to equalise which resulted in one of their men being booked for being over-enthusiastic.  Overall it had been a much better second half. Despite getting a bit of stick from the Cockfosters contingent, he handled the game fairly well. Leverstock Green was a nice club too, making the effort to say hello and make us feel welcome when they saw we were not regulars. The programme was a tidy effort too with a bit to read and plenty of stats. It was a much quicker journey home, 30 minutes to Aylesbury and then 25 minutes back to home, so I was able to be tucked up in bed at a reasonable hour. 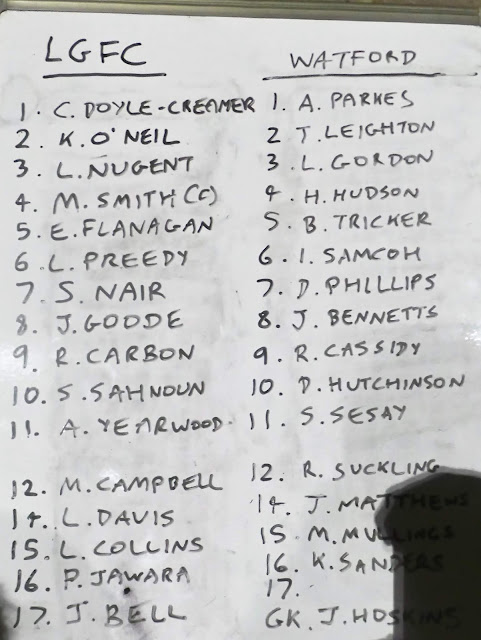 I was on my own again this Tuesday, thanks to fellow hopper apathy. So I wanted to do a game, but keep it local and therefore not too expensive. There were three main contenders. Holmer Green v Maidenhead United was an interesting tie and was walkable from my house, but I'd already updated my blog for that one. There was also Northwood v Harefield United, but they were charging their full price £8 admission for a tie that didn't really whet my appetite. I eventually plumped for Leverstock Green v Watford in the Herts Senior Cup which looked an interesting game. I'd already seen them in cup action this season as they won 1-0 against Southall in the FA Cup in a game played at Ashford Town. That was a game that I used to update my blog and the same applied in this case as being four years since my last visit, I hadn't yet settled on my current format. There are more than likely better blogs out there on the internet, but I'm fairly happy with my current efforts and its nice to look back as it brings back memories. Sadly, I didn't note goalscorer details on my last visit to Pancake Lane and despite doing a bit of digging on the internet, including archived pages, I was unable to confirm the information. 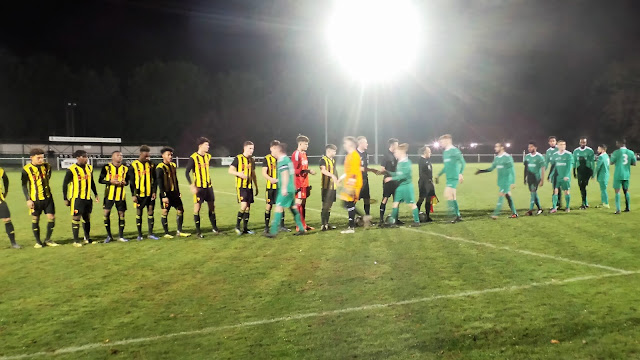 The day of the game came and I'd had a pretty decent nights sleep, having gone to bed at 8.45. As usual on the day off, it was a walk down town before getting a lift home. I spent the afternoon catching up on TV and other stuff. After a nice Chicken Balti for dinner, I left home at 6.40. It was a good journey with me arriving at 7.20. Entry was a reasonable £7. I got to park inside the ground and so sat in my car until 10 minutes from kick off. I also got a 50/50 ticket for £1, but it didn’t win. The first half saw good spells for both teams, but composure was lacking, so 0-0 at halftime was probably a fair reflection of the game. Watford’s youngsters took the lead 3 minutes into the second half, a good pass found Dom Hutchinson and he got away from his marker before a calm finish into the bottom corner. There were chances for both sides and although Watford shaded it, Leverstock Green can count themselves unlucky not to have got on the scoresheet. I made a decent getaway, listening to the footy on the way home, I got home at 10.10 and was in bed half an hour later, watching TV until around 11.30.

PANCAKE LANE is a tidy little setup. Originally the only seating and cover was on the clubhouse side and consisted of a few benches. Talking of the clubhouse it is modern and welcoming with a fair range of drinks. The tea bar did hot & cold drinks and a selection of food. The only other area of cover was a metal stand to seat around 100, named the Friends of Leverstock Green stand in honour of those that sponsored it. It's yet another Arena Stand sadly, the rest of the ground is open hard standing. 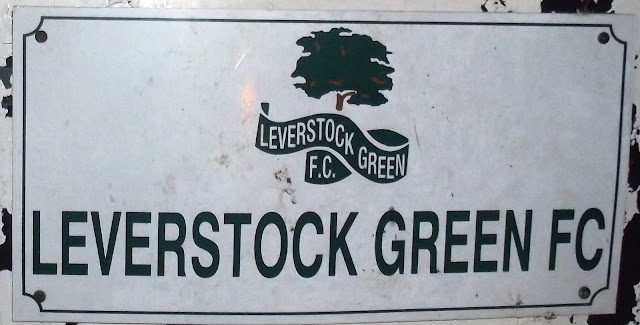 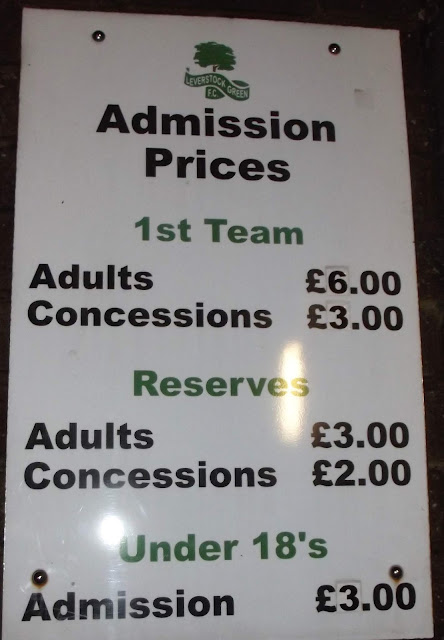 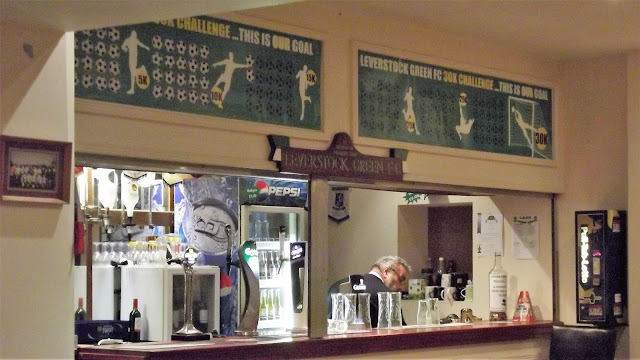 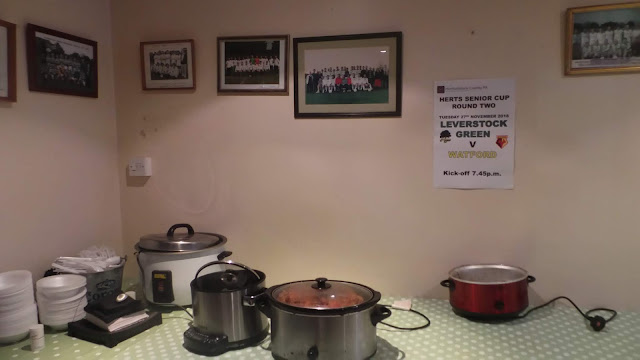 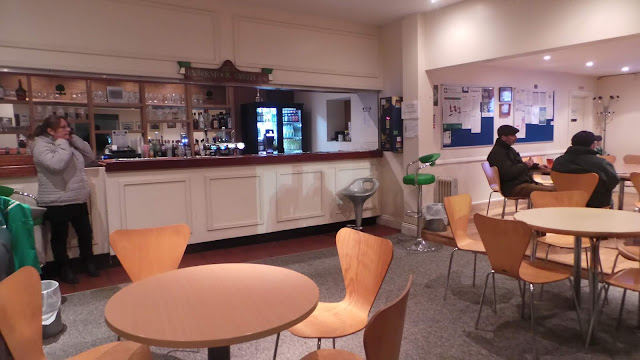 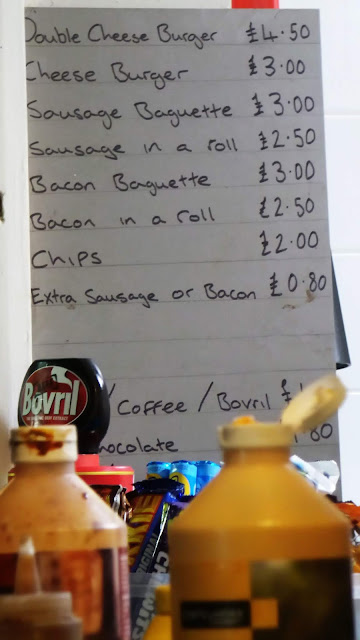 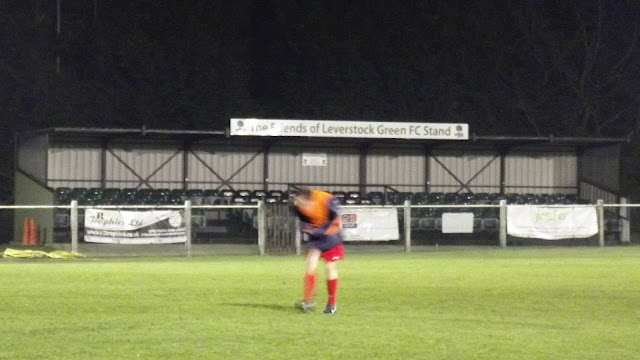 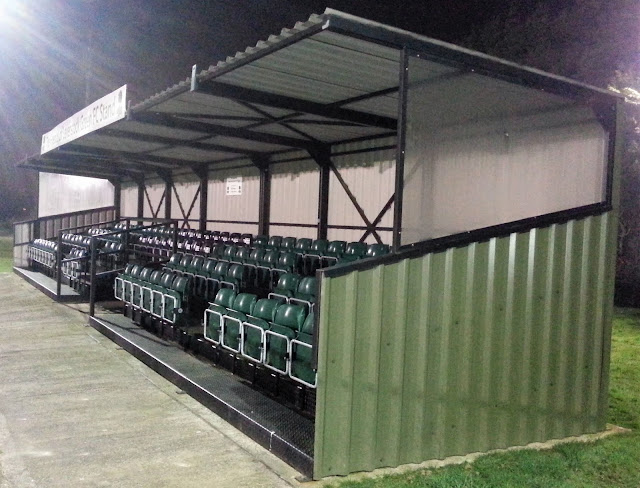 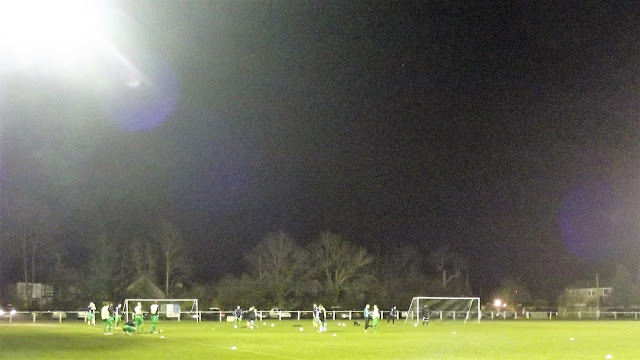 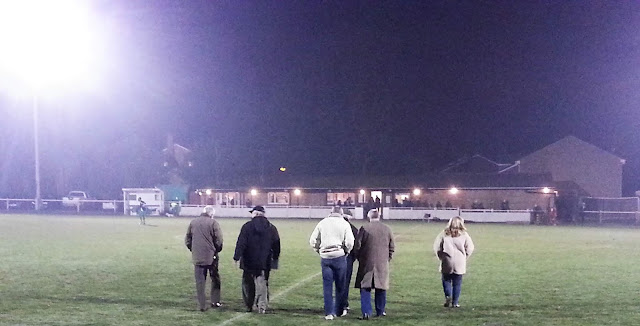 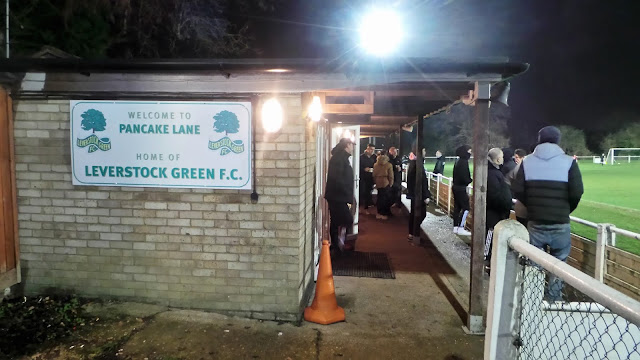 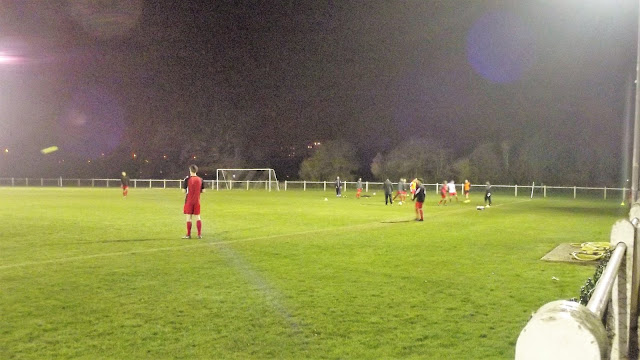