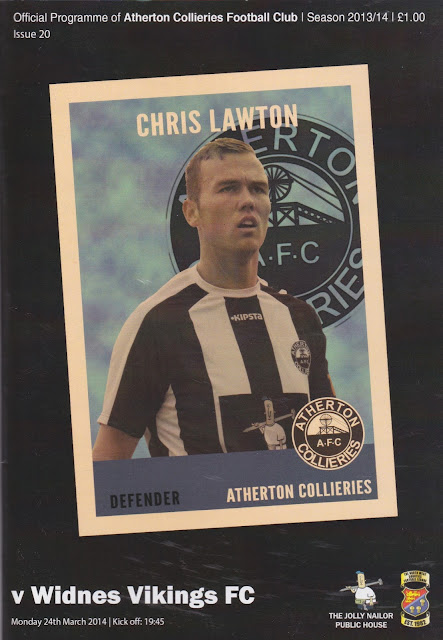 Atherton Collieries were founded in 1916 and in 1982 joined the North West Counties League as founder members. They won the league's third tier in the 1986-87 season and won promotion to their current level in Division 2 (now called Division 1) It was promotion again when they joined the league's top tier after a second-placed finish in 1995-96. They remained there right up until the 2008/09 season when they were relegated after finishing bottom of the newly named Premier Division. Their form was a mixed bag in those years and they had finished bottom before but not been relegated. Since then, they have finished 6th, 5th and 4th twice, improving season upon season but not yet gaining promotion.  They have won a huge amount of local cups, most recently the Bolton Hospital Cup in 2012. In the FA Cup this season they were unfortunate to lose to Radcliffe Borough in a replay after taking the lead against a side 2 divisions higher than them. Their best run in the worlds most famous knockout competition came in 1994/95 when they reached the 3rd Qualifying Round. As for the FA Vase, the got to the 3rd Round in 1992/93 before losing 4-0 to Bridgnorth Town. Famous former players include the Pilkington brothers - Danny and Anthony who signed for Stockport County and played in the Football League. And former Lincoln, Peterborough and Chester striker Simon Yeo had a loan spell at Alder Street in the 1998/99 season whilst he was at Hyde.

As far as I can tell, this is Widnes Vikings' first season in football, having been previously known as Widnes Town in the West Cheshire League. They were doing reasonably well in their first season and looking to push on up the table. A name more famous in Rugby has expanded and the team even play at the town's huge Rugby Stadium. Before the days game Widnes were safely in 14th place with Atherton Collieries in 4th with a very slim chance of getting in the top 2 promotion spots, should results go their way.

I'd been keen to visit Atherton Colleries for some while, I was mates with one of the people at the club and also a couple of other friends had shown interest. It would have to be during one of my football trips up north due to the distance, but luckily they played on Monday nights when not a lot else was on. Initially, I was planning on going to their game v Formby on this night but was disappointed when it got moved to a Saturday. Then for a while, I had Northwich Victoria v Harrogate pencilled in, but that too got moved. It was back to the drawing board then, and I was pleased when the NWCFL website had them back down as playing tonight, albeit against Widnes Vikings. Actually, the opponents make no difference to me, it was the Colls I was here to see. I also turned down a corker of a ground in Glossop North End and Bootle v Everton to watch this game.

On the day I woke just after 7 and after watching some TV I had a bath and checked some stuff on the internet. I left home just after 12.30 and went down to collect my train tickets for Wednesday's trip to Manchester which were free thanks to a voucher. Steady progress was made up the M6 though an accident delayed me for half an hour just north of Birmingham. There were a couple of other small delays but after a visit to Manchester League side Atherton Town, I was parked up at the ground just after 5.15. I had looked at my CAMRA app and it had informed me that there were 2 pubs that did real cider in the town. The first, the Jolly Nailor drew a blank, so I went to the second called the Pendle Witch. That wasn't brilliant, only having Old Rosie so I opted for a weaker one I had not had for a while called Symonds. I then went for dinner at a place called Pizza Colosseum and had a fairly decent Chilli Burger and chips for £2.70. During this time I had been in contact with Matt who runs the excellent Lost Boyos blog and had arranged to meet him at the Rope and Anchor pub near the ground. We had a good chat and were joined by Joe who does a lot of stuff for the club including the match programme. Bizarrely he was wearing a Wycombe shirt, but there was a story behind it. He had entered a competition to win an MLS shirt from the American League. But they had been unable to supply and so he was offered the choice of one from one of the 92 league clubs instead. He had a look at them and liking the colours of my team, he chose a Wycombe one and was wearing it for the first time tonight.

After a pint, we made our way to the ground and after paying the pretty standard £5 for this level and getting an excellent programme for £1. I was given a personal welcome to the club with a very nice sign. I met Emile Anderson the club secretary who had featured on BBC's Non League Football show a few times earlier in the season. Matt had been roped into doing the match report for the game which I will include below.  Or at least I would have if he had done it yet! Anyway, Mitch Leece opened the scoring on 7 minutes with a close-range finish after a good cross. On 32 minutes it was 2-0, Kieran Halliwell doubling the home side's advantage with a header from a good corner. By now the Widnes Vikings keeper was not happy with his sides defensive efforts and was getting right grumpy. His mood would not have been improved before half time as 2 quick Paul Atherton goals made it 4-0 and full justice for the way Colls had bossed the first half. The second half was a different story however as Widnes Vikings stepped up their performance. It didn't stop Mitch Leece getting his second and Colls 5th on 50 minutes as he scored with a close-range header though. Widnes got their consolation right at the death, the best goal of the night coming from a free kick which flew in the top corner. 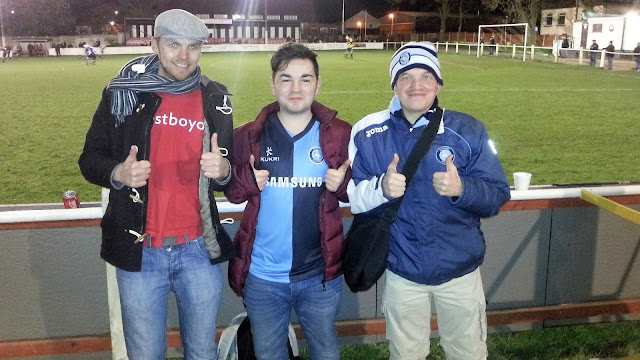 During the game, I met several great people and the ground seemed a haven for dogs with probably the record amount that I have seen at a game this season. I sampled the excellent tea bar in the form of a hot dog, Bovril and Pie, Peas and Gravy. I also had a picture with the lads doing the famous 'thumbs up' logo that Matt's 'Lost Boyos' blog had become famous for. The game itself was a convincing 5-1 win for the home side after they had been on a patchy run of form so I was really pleased for them. In fact, they hadn't scored or won for 5 games, similar to a spell that Wycombe went through earlier this season. One supporter even thanked me for bringing them luck and said I could come anytime, but I imagine if he looked at Wycombe's form he might change his mind! It had been a decent night and after I said my goodbyes I drove the 20-minute journey to my hotel in Oldham. A nice bonus was that there was a pub outside the hotel. It was a pretty bog-standard overpriced job but I still enjoyed a pint and listening to the end of the quiz night. I checked into my hotel and listened to the radio while browsing the internet before going to sleep at 11.20. 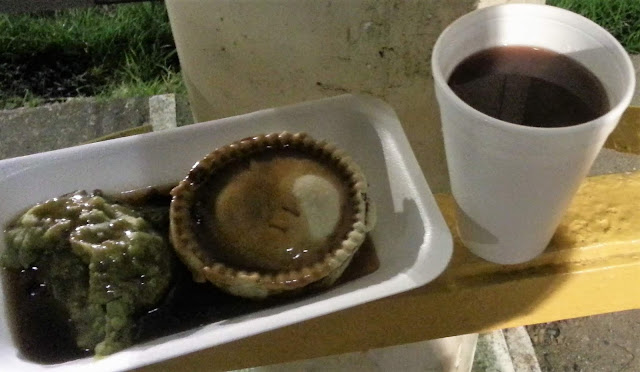 ALDER STREET is a traditional non-league ground that would probably be at home a couple of steps higher up the pyramid. There are 2 stands, one all seated and one a mixture of seats and terracing. The rest of the ground is open. The tea bar is nice, especially the pie, peas and gravy. The clubhouse is nice with lots of football related stuff on the walls, and your standard range of drinks. I couldn't see a club shop but people were wearing club merchandise so it's obviously available.

If you want a bigger choice of food or some alternative pubs then the town centre has plenty. Pick of the pubs for me was the Pendle Witch, while the Jolly Nailor also receives good reviews. Otherwise, the clubhouse is as good as anywhere. I had food at Pizza Colosseum and that was pretty decent and good value. I'd certainly recommend a visit to Atherton Collieries, they are a great bunch of people and hopefully, their efforts will result in some promotions and a wider audience getting down there. 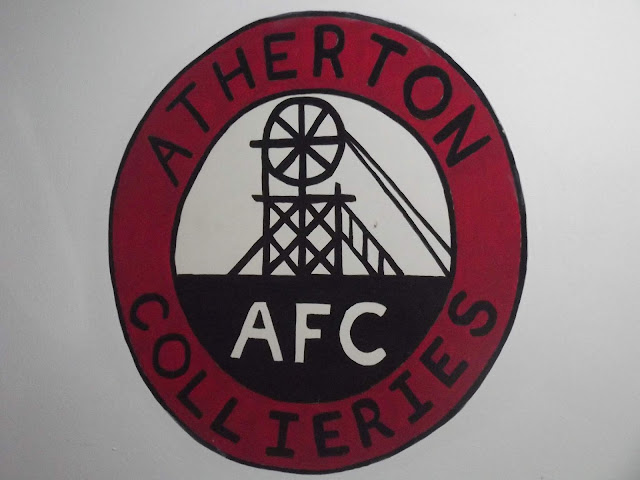 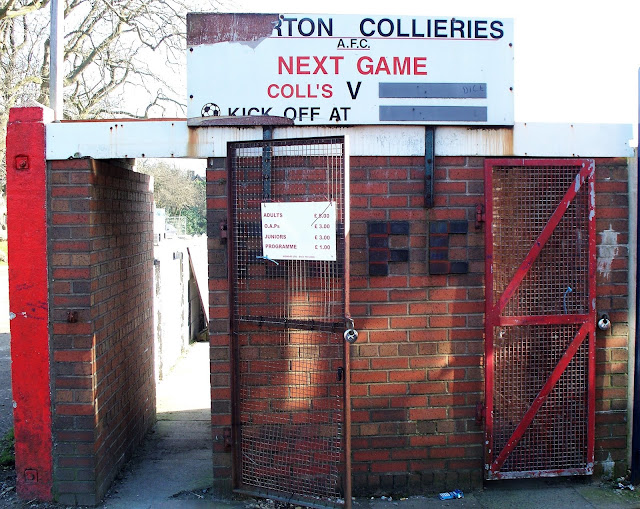 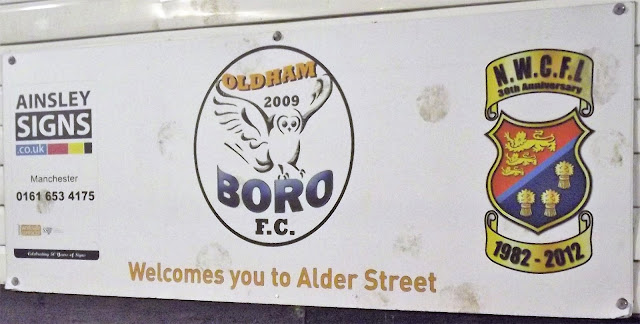 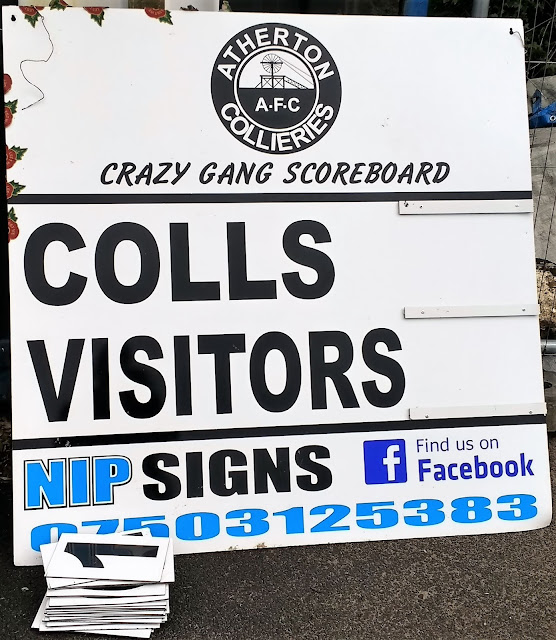 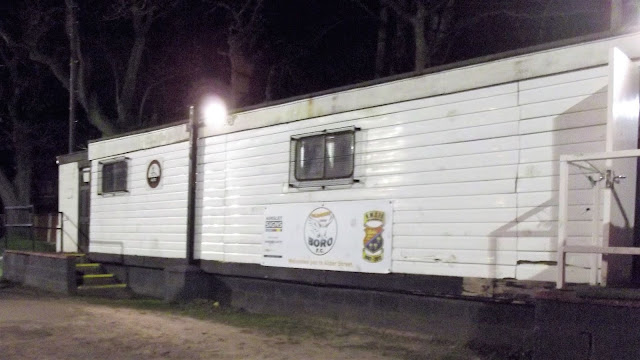 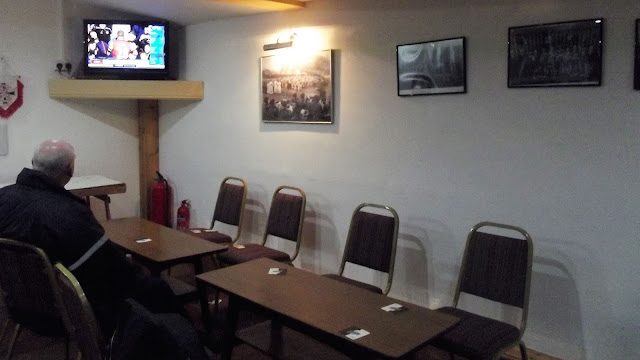 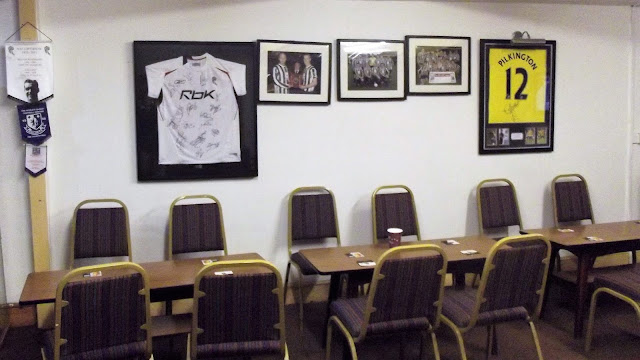 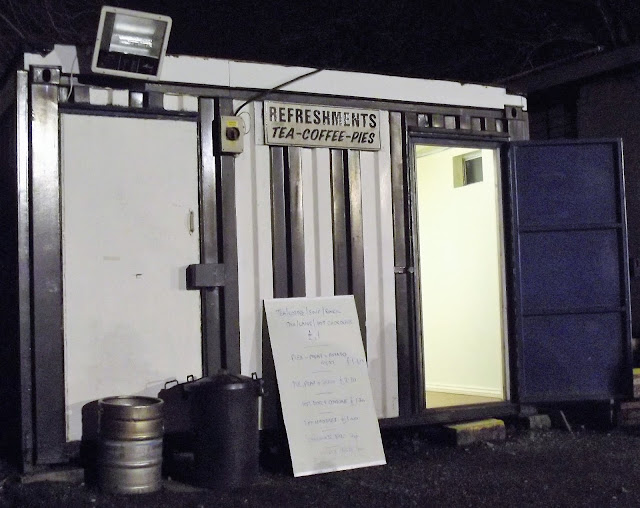 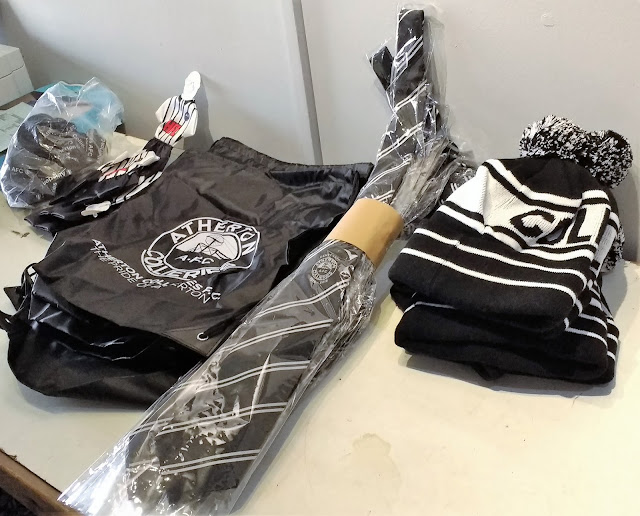 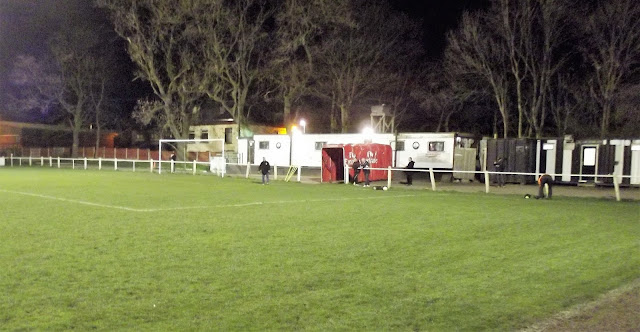 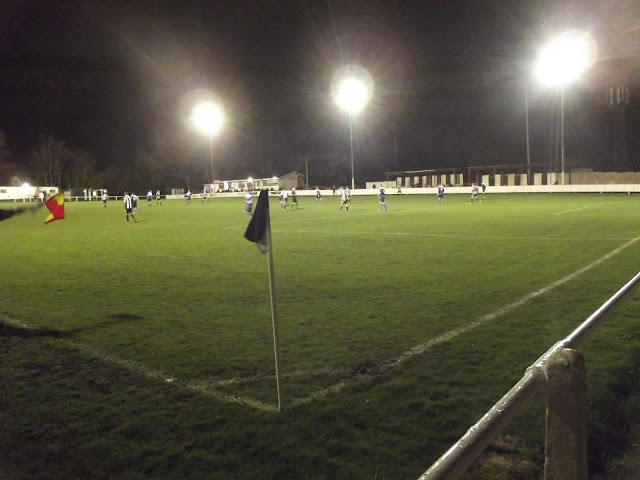 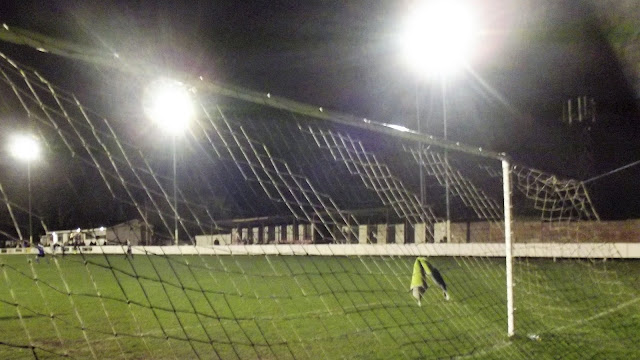 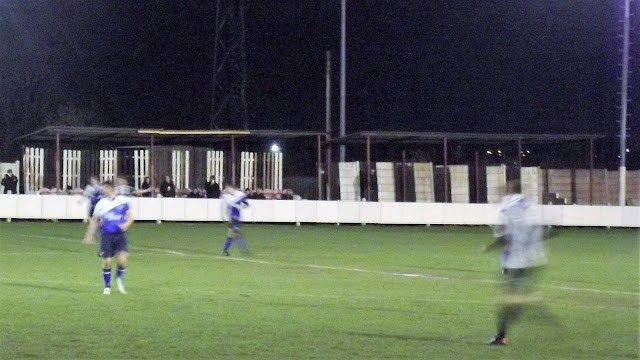 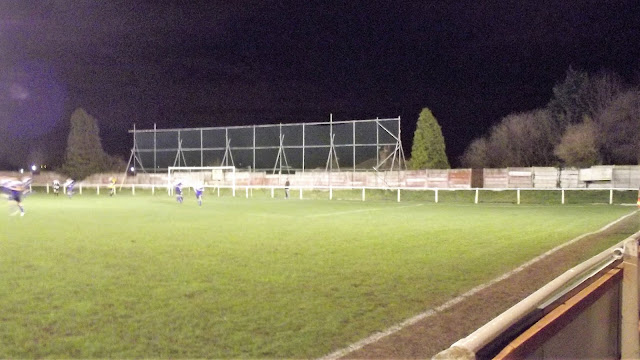 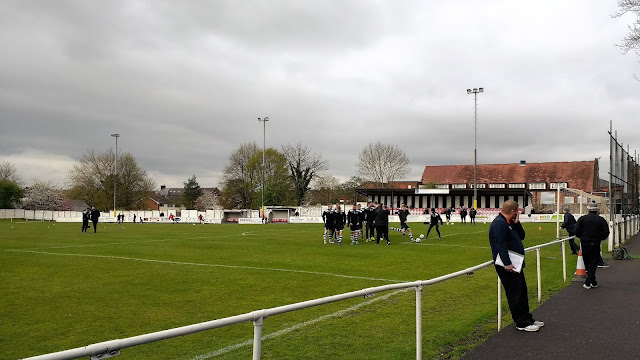 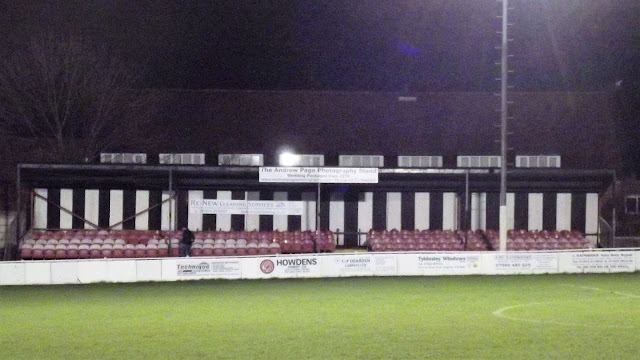 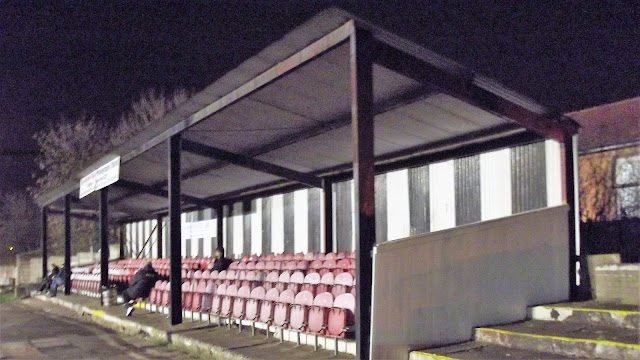