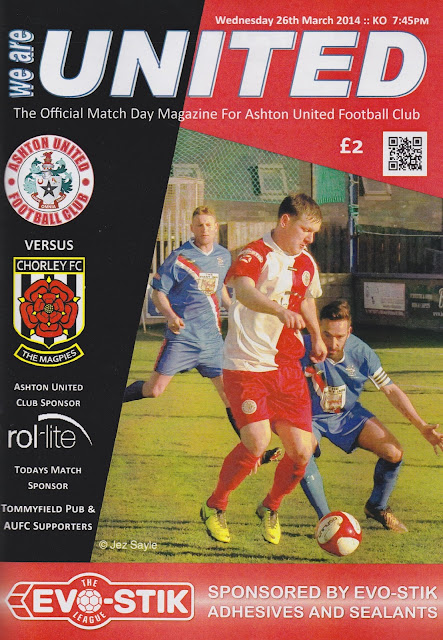 Ashton United FC was founded in 1878 as Hurst FC, hence their ground name of Hurst Cross. In 1885, they beat Newton Heath, who would go on to become Manchester United in the first ever Manchester Senior Cup final. After years of playing in local Cheshire and Lancashire leagues, they joined the North West Counties League Division 1 in 1982. They lasted 2 seasons before being relegated to the second division. They gained promotion in the 1987-88 season, winning the league and then gained promotion to the Northern Premier League 5 seasons later. The success continued when they won promotion to the NPL Premier in 2001-02. Due to a high enough placing in the league they were founding members of the Conference North for the 2004/05 season. They only stayed for one season after finishing 21st and have spent every season since around the mid-table point in the NPL Premier.  They got to the FA Cup 2nd Round twice in the late 1800s and the FA Trophy Quarter Final in 1996-97. They have won a plethora of local cups and famous players to ply their trade for the club include Alan Ball, Dixie Dean and Trevor Hockey. After Saturday's games, Ashton United were 6th, 2 points behind 5th and with a real chance of participating in the end of season playoffs. 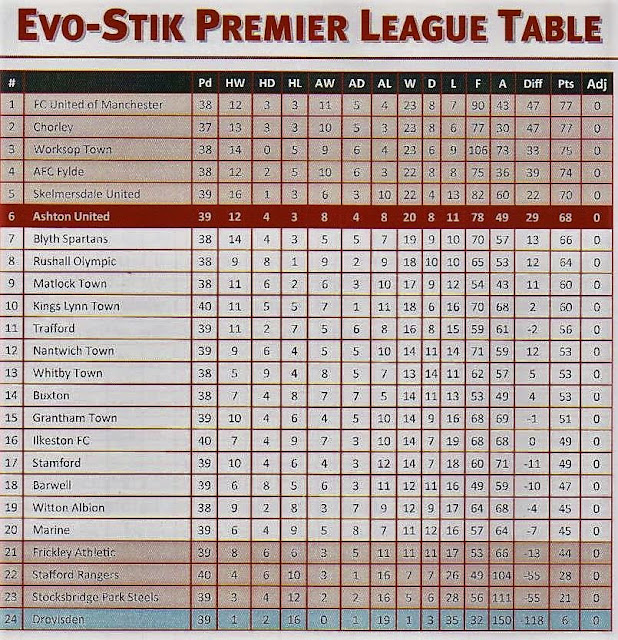 It was to be the third and final leg of my mini break up North for this one. Ashton United do the good service of playing on a Wednesday night as opposed to the more traditional Tuesday and so it provided a good opportunity for groundhopping. I had come close to visiting it on a couple of previous occasions and it was a good one with an interesting club shop and easy public transport access into Manchester. With its array of pubs and expensive parking this was ideal and it only cost £3.30 return on the train. I had a voucher for this too, so it was completely free for me. On the day I woke up at 8, having got a bit of a better nights sleep than the day before. Unlike the previous day when I had time to kill, I wanted to be off fairly sharpish as I had a day in Manchester planned. I put yesterdays clothes on and went over the road to get myself a nice breakfast from Subway, which I enjoyed. I then had a bath and got changed before setting off for Ashton. It took me just over 20 minutes to get there, and I parked up near the ground before walking the mile or so into town. The town centre had a few interesting shops and so I had a look around for an hour before going to the train station and getting a train into Manchester. 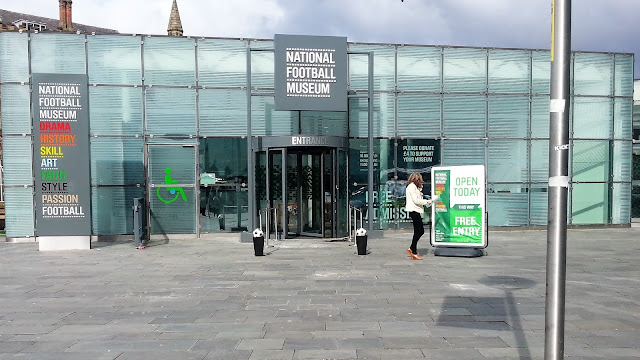 I got off at Manchester Victoria and was very to see that it dropped me directly outside the National Football Museum. I had been there last year and really enjoyed it so it was a pleasure to revisit. There was plenty of stuff related to Wycombe Wanderers, in fact every league club and even some non-league teams too. Especially interesting to me was the Northern League exhibition that they had on, as I am doing a groundhop for that league over Easter. I would have bought a book about that league but despite it saying £3.99 on the cover, they had stuck a label over it and were charging £6.99 for it. Very naughty, and although it was a very nice publication and probably worth nearer the price they were asking, I will wait until the groundhop and pick it up at the price on the cover. In any case, I got myself a pen and a notepad, which were reasonable value at £3 for the pair. I had already decided where I was going for lunch, thanks again to the CAMRA app on my phone. With googling all the suggested places I found a pub called The Font which had a good range of ciders and good food. I had myself a Rojo Wrap with fries and a Marshmellow Brownie for pudding. On the drinks front I tried a couple of new ciders - Blaegwenny Blindfold Cider and Thistly Cross Whisky Cask from Wales and Scotland respectively. I then went to a place called Sandbar for another drink. It wasn't as good as the last place but I still had a drink there before getting on my way. I was alarmed to see that despite only being a few days into my billing month, I had already used up half of my data, which really shows how little I get, or to be more precise, how much I use. I paid for extra too, so will be looking to change my contract ASAP 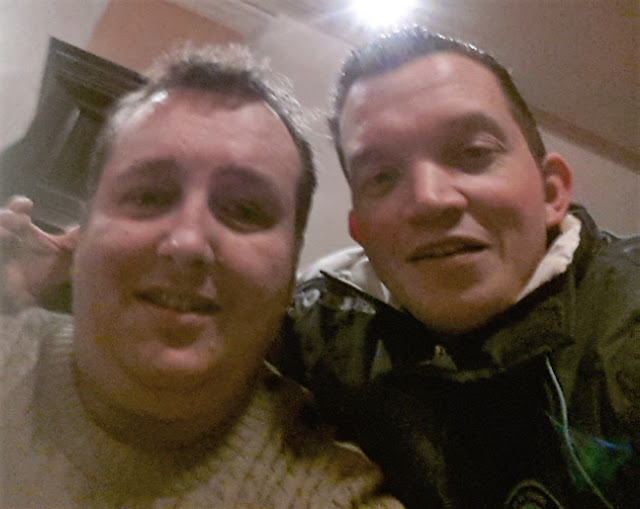 I got a bus back into the city as I had walked over a mile into the student area and was running out of time. While I was on the bus I checked on my phone and saw that Anders, a groundhopper I knew was in the area on his way to a game at Altrincham. I met him in the local Wetherspoons and had a bottle of Manza Loca Mexican cider, a chat about football and a photo together. I went to see if I could get a train back to Ashton at nearby Manchester Picadilly but there wasn't any, so I made my way back to Victoria. On the way, I dropped my phone and now it has a big crack on the screen and is shattered in one corner. Hopefully, my brother will be able to repair it, but I was getting pretty bored of having the same phone for nearly 2 years anyway. By now it was just after 6PM, so I got the train back to Ashton, arriving around 6.30. I walked back up the ground, stopping at a Chinese Chippy for Salt and Pepper Chips and Rag Pudding. They were pretty decent and I finished them before walking the remainder of the distance to the ground, paying to get in and getting a programme. I went to the club shop to get a pen and a book by ex-Manchester City player Paul Lake, then got some chips from the tea bar. I found myself a good place to watch around about the halfway line. Below is the match report from the Ashton United website. 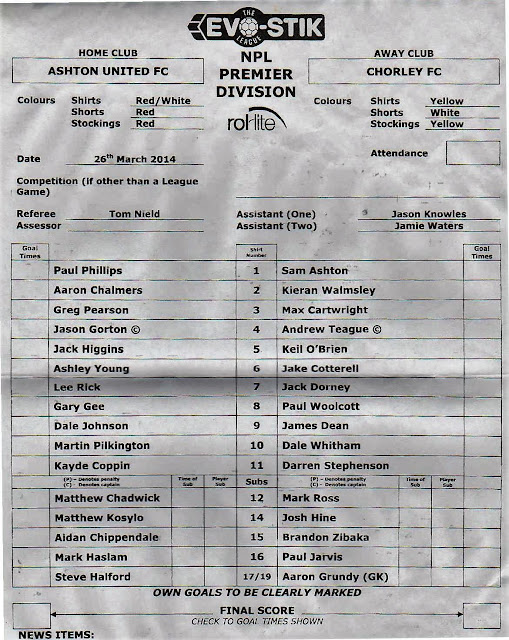 A thrilling evening at Hurst Cross saw Ashton move into the play off positions with a hard fought victory over long time league leaders Chorley. With captain Chris Lynch suspended Aaron Chalmers stepped in at right back and Jay Gorton took over the armband for the evening. Chorley had hat trick man from the first encounter Darren Stephenson starting on the left side but it was the other winger Dorney who made the first impact as he got free down the right wing before his cross reached Cotterell whose shot was blocked. Ashton moved onto the attack as a long ball saw Dale Johnson outmuscle Teague in the visitors’ defence before his pull back was played safely back to keeper Ashton. 2 minutes later the Robins gave the home fans the start they wanted as Lee Rick’s corner reached the far post where Jay Gorton headed home. United could have scored again 5 minutes later as Chalmers long cross saw Garry Gee beat Ashton to the ball, with his header dropping just wide. Ten minutes from the interval the Magpies created their best chance to date as Cartwright’s cross found Whitham with a free header which was held by Phillips. On the stroke of half time a long clearance saw Phillips upend Dorney outside the area resulting in a yellow card and Cartwright’s free kick to the far post, which was headed against the inside of the opposite post by Teague, was scrambled away.

Ashton could have made the perfect start after the resumption as Kayde Coppin reached the by line and saw his cross deflected to Lee Rick whose toepoked effort rolled just wide. Matters were levelled up on 54 minutes as a cross was flicked on by Dean reaching Teague at the back post who had plenty of time to steady himself before firing home. The visitors began to look like the more likely winners as Whitham’s volleyed cross was just too high for Dean, before Johnson was fouled at the other end and Rick’s deflected free kick was pushed over by Ashton. With ten minutes to go the game was decided as Garry Gee, putting in a combative performance in midfield, won the ball and played in Johnson who finished emphatically from just inside the area. There was still time for Rick to set Matty Chadwick free down the right wing – his cross saw Johnson steady before firing wide and Chorley’s last attempt saw Whitham blaze wide following a corner.

After the game, I went to Sainsbury's as I needed some stuff for the morning when I got home, and also I fancied some fondant fancies. I was mildly annoyed when there was a minor delay on the M6 and severely miffed when the bit between the M42 was selfishly closed. The supplied diversion was poorly signposted and made little sense and while my Sat Nav (CoPilot) is good with regards delays, when a road is closed it is totally useless and it took me lots of scrolling through menus, trying different options and driving round in circles where it kept trying to take me back to the closed junction before getting back  onto the M42, going up another junction and going cross country to get on the M40 near Warwick and Leamington. It had cost me 30 miles in fuel and over an hour in wasted time. Finally, I got home at 2.30, still staying up for another hour before going to sleep. 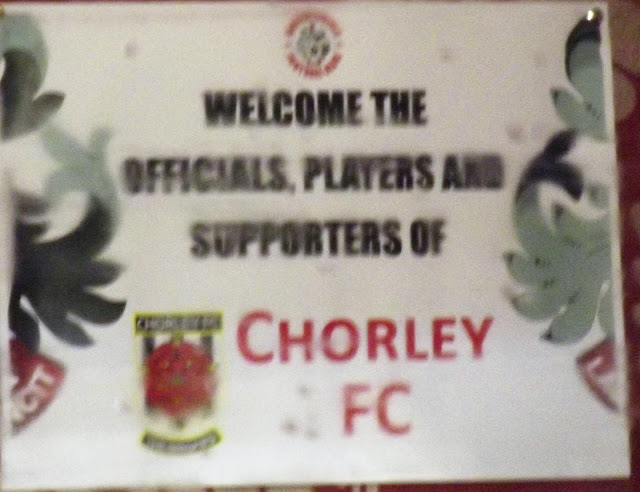 HURST CROSS is another traditional non-league ground that I enjoyed visiting. Both ends are open terracing. The side where you come in has a seated stand holding around 300, while opposite there is covered standing for around 700. The tea bar and clubhouse are pretty standard for this level while the club shop is a real treat with plenty of interesting stuff to buy. There are a few takeaways nearby, and plenty of choice in town if you fancy the walk. 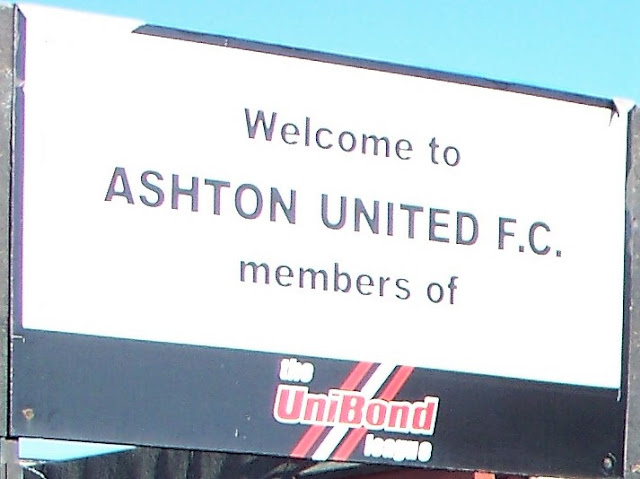 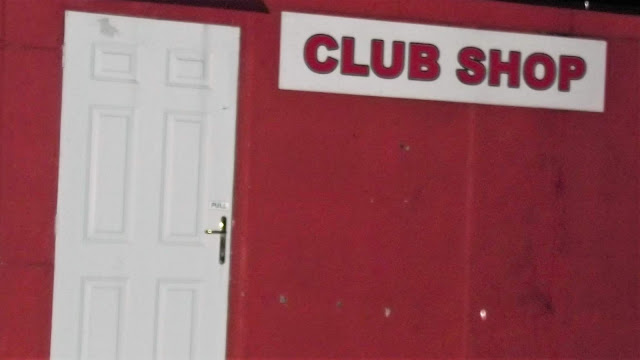 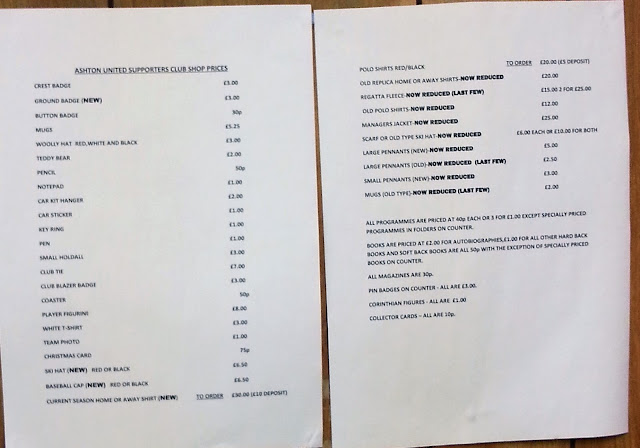 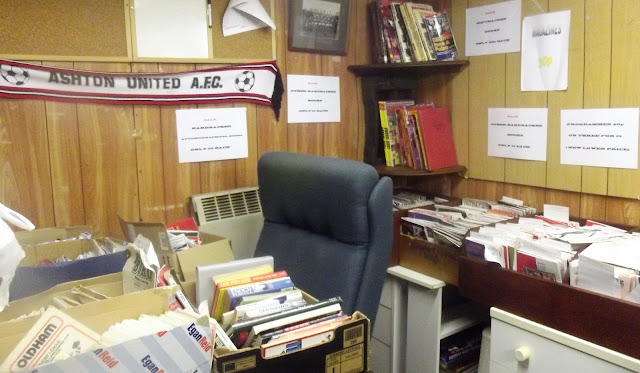 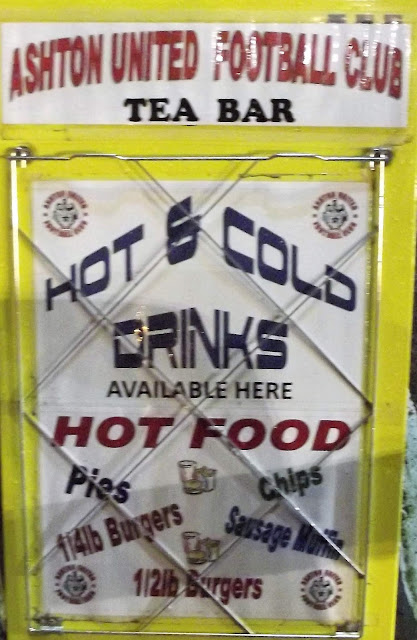 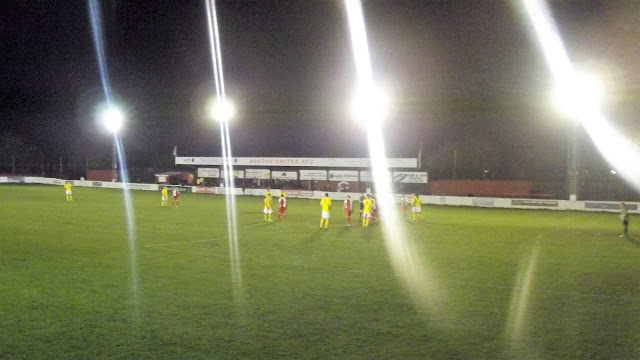 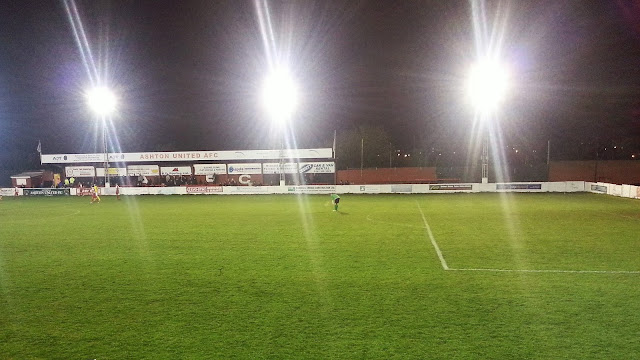 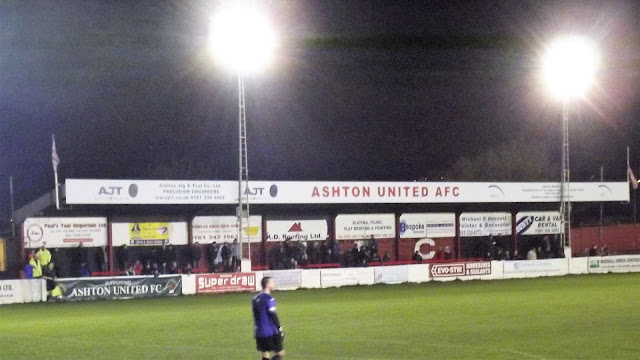 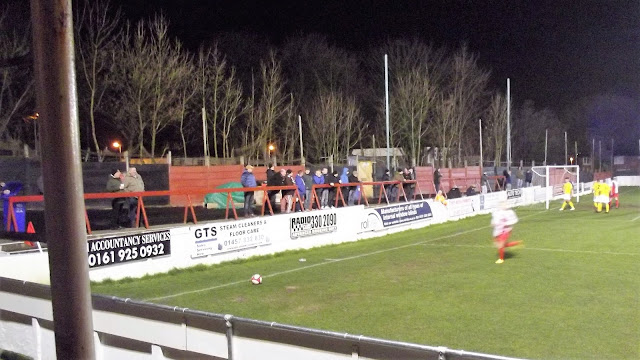 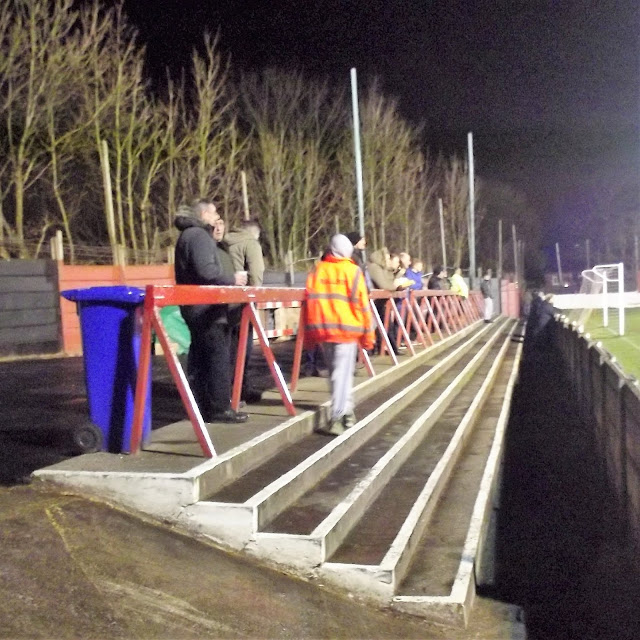 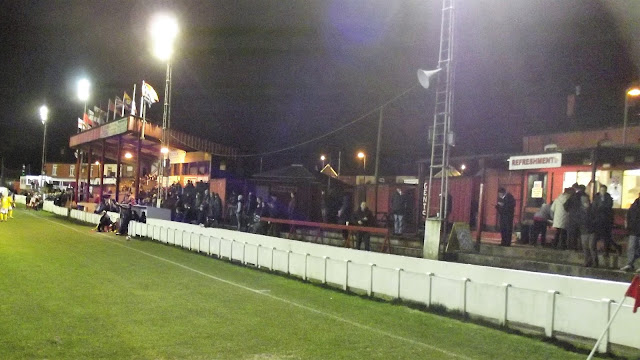 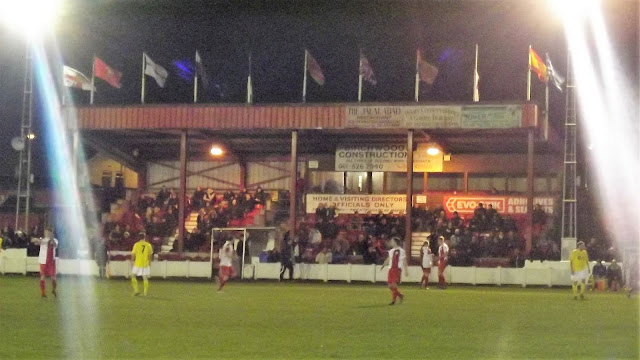 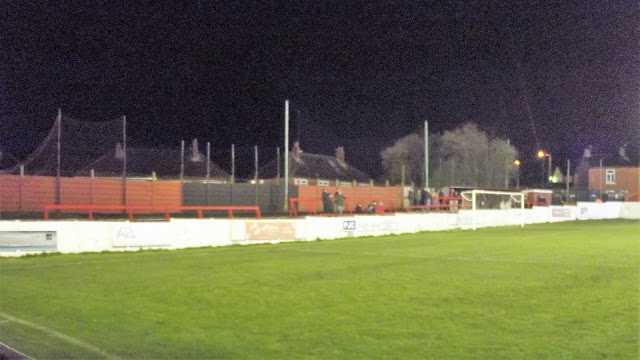