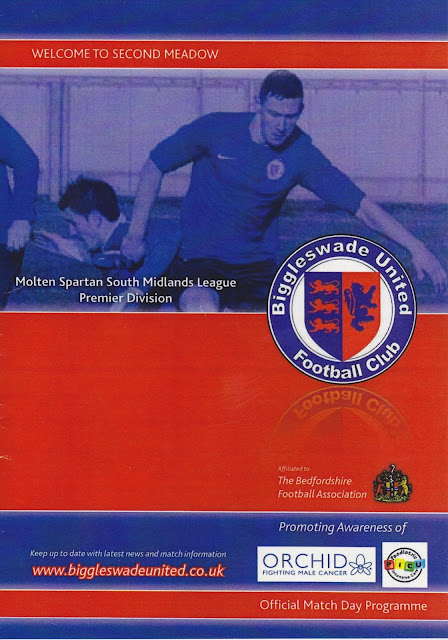 Biggleswade United FC was once on an equal footing with their neighbours Biggleswade Town. But the latter recently got a new ground and this has really helped them push on to bigger and better things. Around 5 years ago, they were both in the same league, but 2 promotions later they find themselves in the Southern Premier, while United remain where they were. The club was promoted back to the Spartan South Midlands League in 1996 after a spell of playing in the Bedfordshire League. Initially, in the 1st Division, they won promotion to the Premier in 2004-05 after finishing 3rd.  Despite finishing a very credible 9th in their first season at the higher level, they had found the going tougher since, finishing in the bottom half of the table for every season since. They had had their joint best ever season in the FA Cup this season, reaching the first qualifying round, which they had achieved on 2 occasions previously. They beat Irchester United and Leighton Town with good victories, before losing 7-1 to Hendon in the next round.  They had made the second round of the FA Vase on 2 occasions as well. 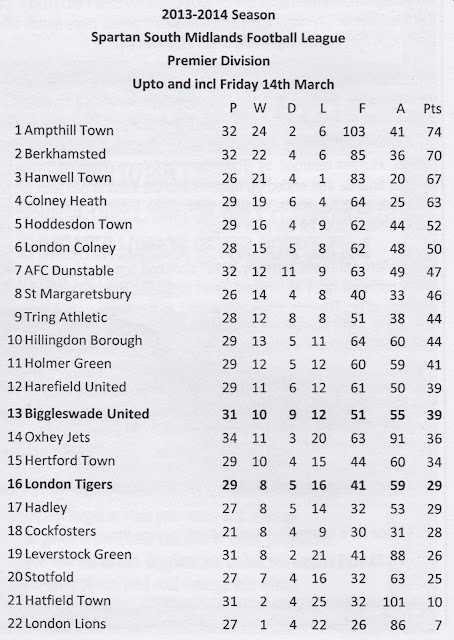 Originally this was going to be the day I went to York City v Wycombe Wanderers. Ever since the fixtures came out in June I had been looking forward to this one. The plan had been to drive, get up their about 11, park up and take advantage of York's excellent range of pubs, including one real beauty, The Maltings. I would have plenty of choice of untried ciders at there and other places. But my plans were scuppered when I couldn't get enough people to make driving worthwhile. Big Paul was getting a freebie lift and Dale expressed interest initially, but then got a lift with someone else who had a fuller car. The coach was another option, but the drinking time in the city would be limited to around 45 minutes at most, plus with ticket £50 would have gone from my wallet before a pint had even touched my lips.

So I started to draw up alternatives, originally the choices were

1: The Norfolk Hop: Norwich United at 12, Gorleston or Lowestoft at 3 and Great Yarmouth at 6. Despite my mate Laurence's indifference to attending this, it was an attractive if potentially expensive one.

2: Reading Town or Highmoor IBIS. Both of these Reading based teams were at home, and it would give me the chance to visit a pub that I had fancied visiting for ages, parking up and then bussing it or walking to the town and back.

3: AFC Kempston Rovers v AFC Rushden & Diamonds and meet Alex who I had met at Stotfold earlier this season. Despite a bloke from the club being rude when I went there to take pictures earlier this season, I was prepared to overlook this due to the fact that I would be meeting a mate, and the game was an attractive one too.

But in the end, it was another option that I chose. It had the element of option 3 in that I would be meeting my mate, but it was a bit easier for him to get to. That game was Biggleswade United v London Tigers in the Spartan South Midlands League. This also had the added bonus of having a half-decent pub in the town called the Golden Pheasant, and I could park up at the ground and take the short walk into town which would be nice. Plus there was the possibility that another mate, Ryan, who I met when I went to the other Biggleswade team, may turn up too. The week beforehand had been a mixed one. I had ticked 2 grounds and had some other little victories. But Wycombe had been doing very well lately, but they lost their unbeaten record on Tuesday when they lost to Plymouth Argyle 1-0 at Adams Park. The good run had coincided with me choosing to sit in the family stand with Anwar. In the 3 games, I had seen there we had won two and drawn one, after going 4 and a half months in the terrace without winning. I planned to continue this on Tuesday and we got to half time goalless. But then Anwar chose to go in the terrace second half, I followed because I didn't want to sit there like a lemon on my own. But within 2 minutes of returning, we were 1-0 down. It was a tidy finish by the Plymouth man, but that was of scant consolation as that was how it stayed to put an end to our mini-revival. 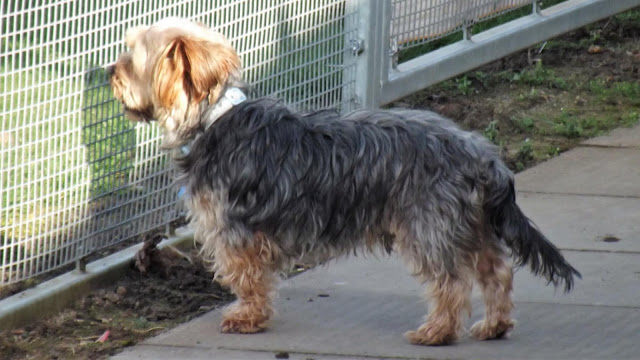 Further disappointment came regarding the Swedish Hop that I was considering attending this June. It would give me 7 games in 3 days in the usually barren close season and would get me off to a flyer for the 2014-15 season. But there were 2 sticking points. First off was the fact that I would be flying from Heathrow and flying back to Gatwick. I could get a bus back to Heathrow, but that would be time-consuming and would cost £27. But then I hit upon an idea. There were fixtures in Norway on Thursday beforehand. So I could fly from Gatwick to Oslo, attend Lillestrom v Stromsgodset on the Thursday, get a bus from Oslo to Gothenburg on Friday morning (it would cost me the same as the Gatwick to Heathrow journey) and meet up with the other hoppers in Gothenburg on Friday lunchtime. The other sticking point was that I would have to share a room when I got there. I didn't really fancy sharing a room with a hairy arsed bloke, especially one (potentially) that I have never met before. Sharing a few pints, or an experience at a football match, perfect. But I am a light sleeper and wouldn't want to be kept up all night by someone snoring. I could pay for a single room in Sweden, but that would be another £70. The hotel was a good un too, 4 star. So I figured that I could make my hotel arrangements at a lesser place on my own, get a single room and save myself a bit in the process, which I could put towards my extra day in Norway. I contacted the organiser to see if I could just buy the football tickets and travel part of the trip, but he wasn't keen. I really didn't want to push the point, as I know this must be a hell of a lot of work for him, the write-ups I have read about previous weekends have been very positive and I didn't want to create bad feeling or appear ungrateful. So I guess I will have to think on it, especially as I could get a subsidised break with my parents at around the same time. 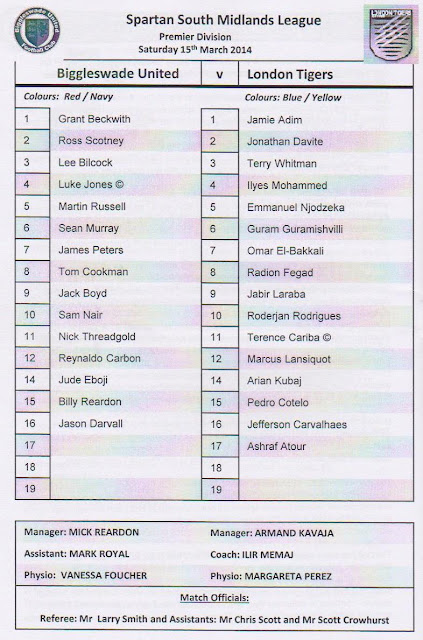 I was annoyed to wake up at 6.30am on my day off, typical when I feel like I could sleep for ages most mornings when I have to be up at 4. I got up, watched a few videos on YouTube and took a bath.  I then started my blog post off and chatted to Alex who I would be meeting later. I left at 12 dropping off a parcel at a local shop before I left. Despite some slow traffic on local roads, I made pretty good time and was in Biggleswade by 1.30. I got some chips from a chippy right near the ground and then made my way to the Golden Pheasant, the pub where I had been told did real cider. This turned out to be true, and a couple of pints later I was ready to go to the ground. The Duntons cider was really nice and a local one too. I  stopped at Poundland on the way to get some drinks for the game and also a tub of chocolate honeycomb. I went back to my car to get my stuff and made my way to the ground. 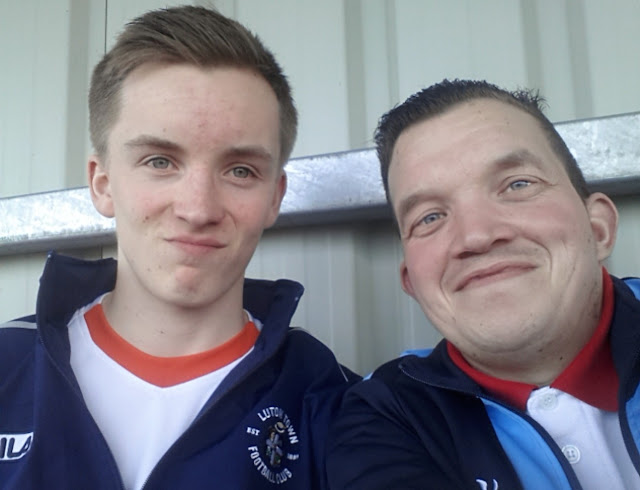 Arriving at about 2.40, I paid my £5 entry and bought a programme for £1. I was pleased to see some dogs about and said hello to them before getting some pictures of the ground. I walked back around and was pleased to meet Alex at the turnstile. We had a nice catchup and took our seats in the stand for the first half. The opening half was pretty nondescript and it was London Tigers who held a well-deserved lead at the break. Their goal came on 20 minutes and they had dominated the first half, the fact that their player finished from a good ball into the area was evidence of this. Biggleswade started the second half a bit better and started to come back into it with some close chances. But London Tigers were soon back in control and it was somewhat against the run of play when Biggleswade equalised. On 70 minutes they broke and the Tigers keeper was unable to prevent a shot going straight through him. To be honest, it was a poor game and if I'd not have had a meet here, I'd have been off elsewhere. I said my goodbyes and made my way back to my car. The journey was pretty much the same as it was on the way, and apart from being stuck behind a slow-moving tractor for the last few miles, the trip went without a hitch. I was saddened to hear of Wycombe's poor performance. I'd heard that we lost 2-0 during the game through updates on my phone, but for once Gareth Ainsworth was downbeat about things, usually, he finds something to feel good about. I got home at 6.15 and spent the rest of the evening relaxing before watching Match Of The Day and going to bed. 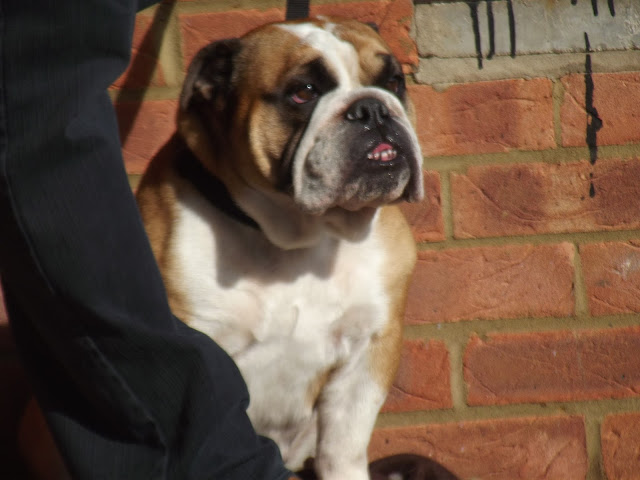 SECOND MEADOW is one of the more developed grounds in the Spartan South Midlands League and unlike a lot of them is fully enclosed with proper turnstiles. It would probably be OK for step 4, though on the pitch that is a fair way off. There are 2 covered areas - seats holding about 150 and cover holding around 200 and both are pretty modern. The seated stand is a metal one but isn't like the standard ones you see at grounds up and down the leagues nowadays. There is a clubhouse with teabar which I didn't try and the people I spoke to at the club gave me a good welcome. Added to the fact that there was a nice town with plenty of food and drink options, then this is a pretty solid option for a groundhopper and worth a visit. 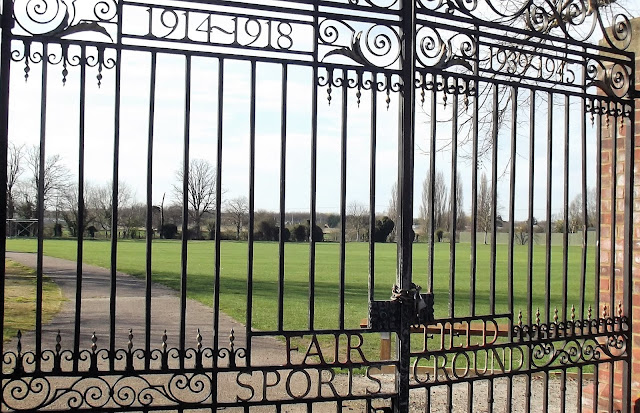 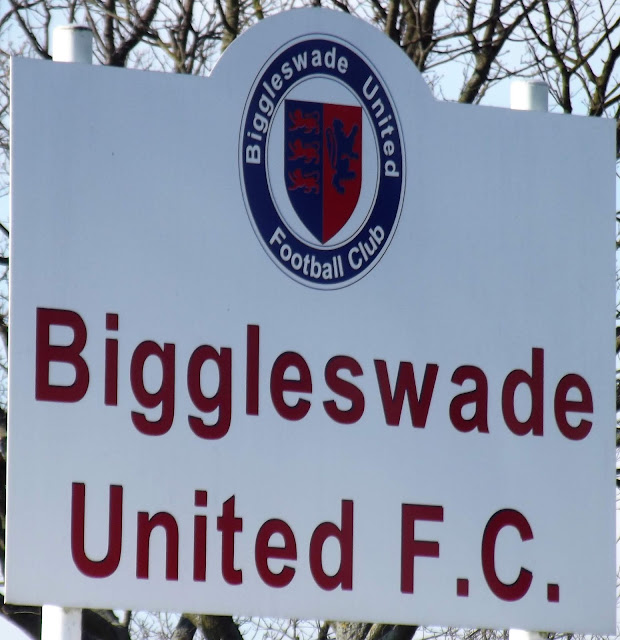 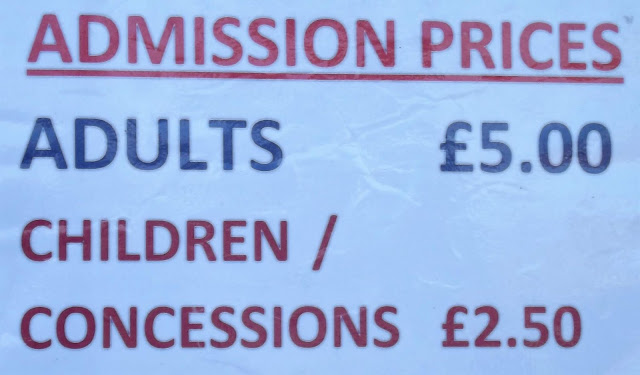 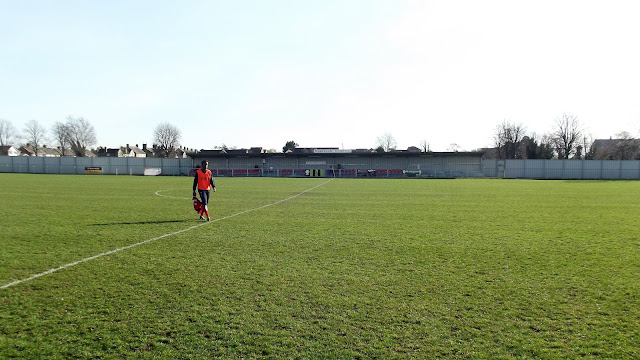 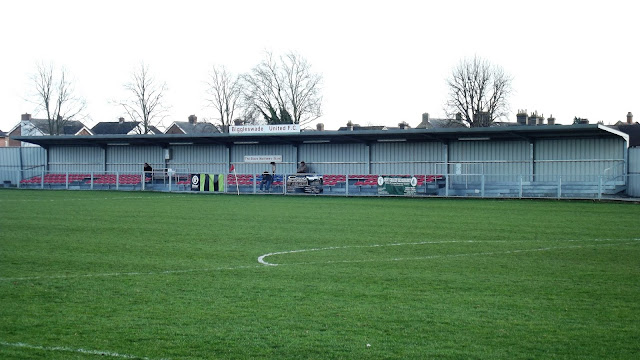 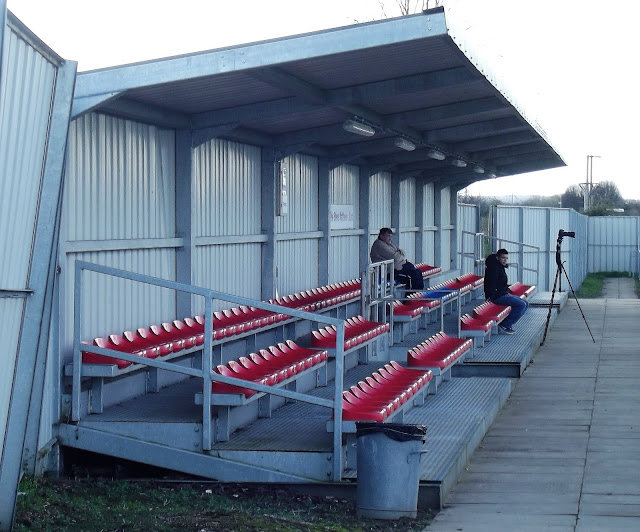 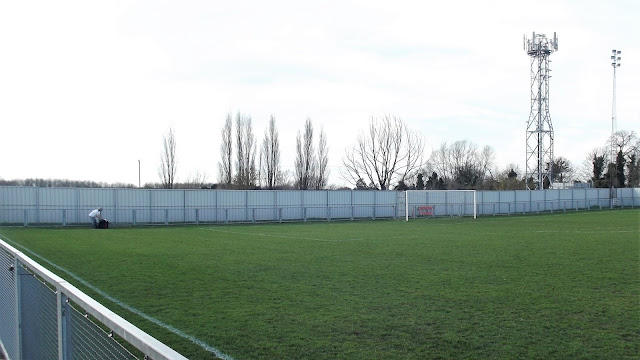 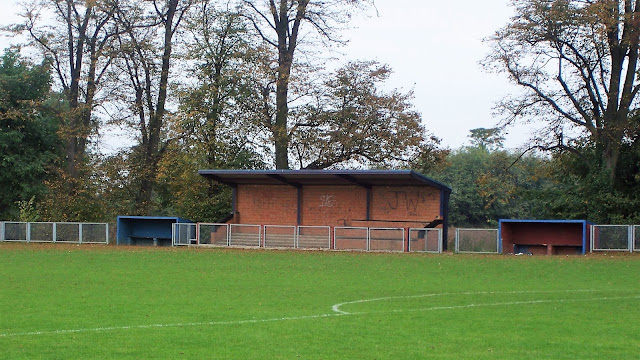 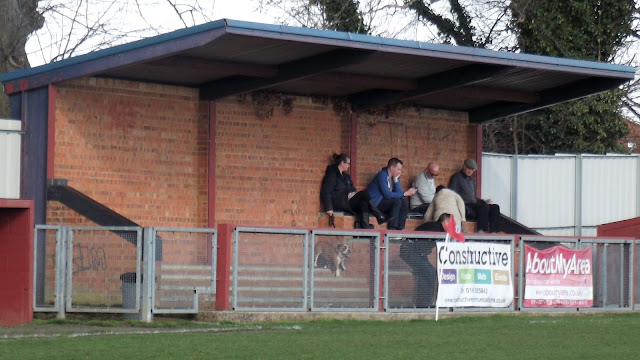 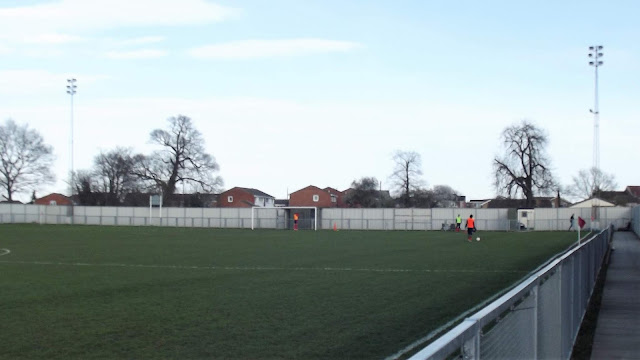 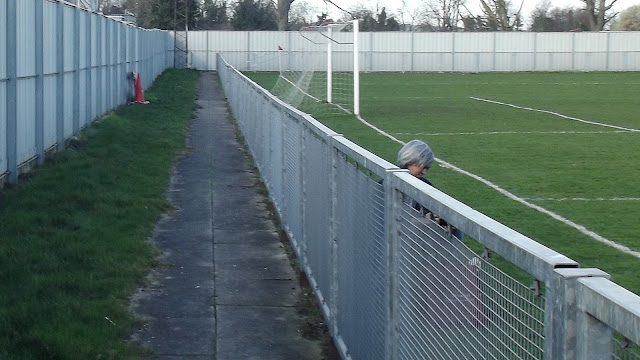