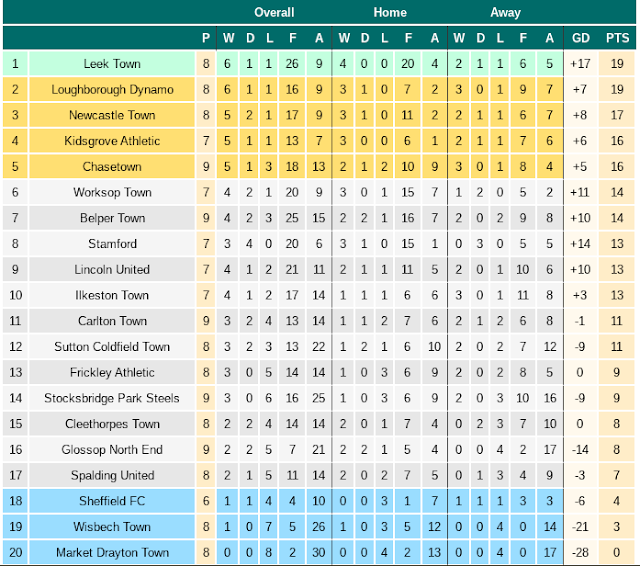 Loughborough Dynamo made the step up to the Leicestershire Senior League in 1989, joining Division 1. They had a few 4th place finishes in the 1990s but in 2001, they finished bottom of the league. However, the next season saw a remarkable turnaround to see them win the title and seal promotion to the Premier Division. A 4th place finish was a credible debut and then the following season, they were champions, winning promotion to the Midland Alliance. In 2008, they were runners-up behind Atherstone Town, winning promotion to the NPL D1 South in the process. They have been there ever since, albeit with a few geographical changes. Finishes have ranged from a couple of 20th place finishes in 2016 & 2018 to a pair of 8th place finishes in 2012 and 2019. In the second season abandoned due to Covid, they were actually in second place when the season was abandoned after eight games.
In the FA Cup, Loughborough Dynamo have made the 2nd Qualifying Round three times - losing 2-0 to Redditch United in 2010, 2-0 at Solihull Moors in 2011 and 3-0 to Tamworth in 2019. Their best progress in the FA Trophy came this season when they beat Bury Town 1-0 before losing 3-1 to Bedford Town in the 3rd Qualifying Round. During the 2004/05 season, the club enjoyed a reasonable FA Vase Run. They beat Romulus 5-2, Downes Sports 3-0 and Harrowby United 5-3. They then faced Leamington in the 2nd Round, drawing 1-1 before losing 3-0 in the replay. In terms of local cups, they've won the Leicestershire Senior League Beacon Bitter Cup in 2004, the Leicester & District League Three Sons Trophy in 1981, the Loughborough Alliance Cobin Trophy on three occasions, the Leicestershire and Rutland Senior Cup twice, the Loughborough Charity Cup three times, the Leicestershire FA Presidents Trophy in 2004 and the Leicestershire FA Westerby Challenge Cup twice. 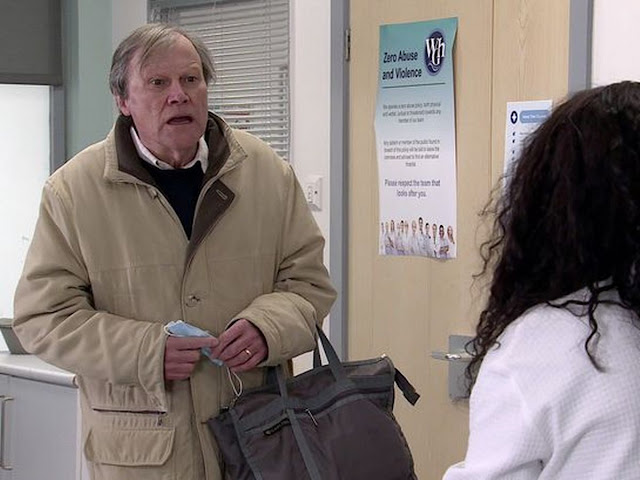 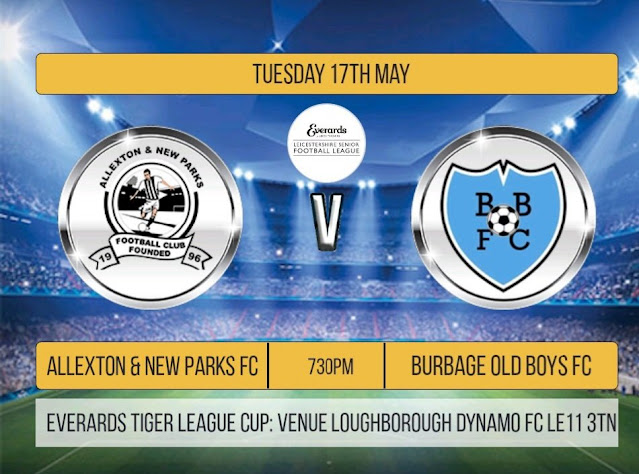 MY VISIT
Loughborough Dynamo had been one of a few grounds that had been really evasive when groundhopping. In the ten years that we had been travelling all over the country, it had only come up once or twice. Maybe it was because the NPL D1 Midlands was only a 20 team division, perhaps it was because their pitch was decent or perhaps it was just bad luck. But whatever, I was glad when I found out that a couple of cup finals would be played here. I'd been to the ground to take pictures on the way to a Wycombe game up north around 15 years ago but nothing but seeing a game there would do, now that I was a fully-fledged hopper. The Leicestershire Senior League Cup Final between Allexton & New Parks and Burbage Old Boys was originally scheduled for last Tuesday, only to be put back to this Tuesday. I'd really been looking forward to it and had made arrangements to take Anwar with me, so I was gutted when I found out it had changed. Luckily, we were both able to make the new date. 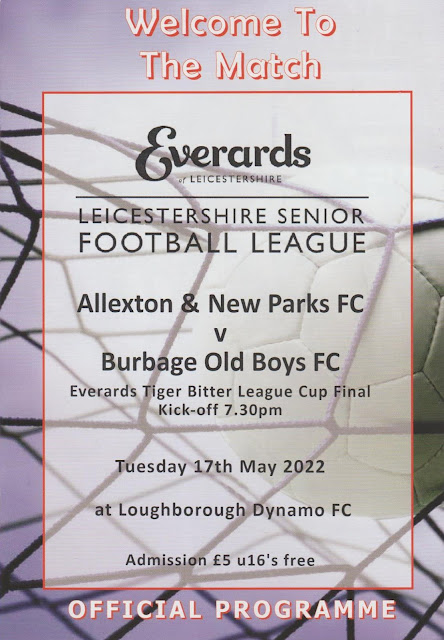 Sunday had bought the usual misery but despite the huge volume of people at work, it went really quickly. I'd been cheered up a bit when I got home by my new Google Pixel 6 arriving and me selling a few bits on eBay. I had a month's free Amazon Prime trial and so this was very useful to make sure I got a case to protect my phone on time. I also ordered some 64GB USB drives as I'd managed to sell copies of all the football ground photos that I've taken over the years, around 55GB in all. I'd previously sold them on DVD but with so many more modern computers coming without a drive, it was a good shout from the buyer that suggested it and I was making around a tenner a pop for less effort than burning DVDs would take. The only drawback was that it took a while to transfer such a huge amount of files, but at least I was able to get on with things whilst it was completed. Monday was another long day and so I was glad of my usual day off on Tuesday. 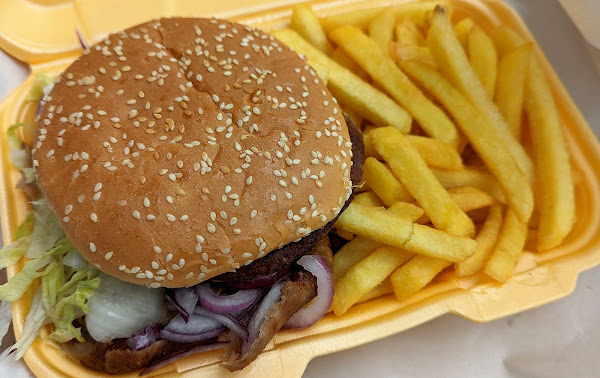 It was my usual walk to town and back in the morning with me having some nice Spanish Tapas chicken from Lidl for lunch. It was a real scorcher of a day and I was pleased when I found out that my favourite pub in Wycombe, the Rose and Crown would be opening early for Wycombe fans. It had been my happy place and lucky pre-match pub for 3 years and would save me going into crowded places in Wembley. It was the day of my number being transferred to my new phone and everything went smoothly aside from WhatsApp which was not letting me sign in on my new device, but still working on my old one. As a temporary measure, I took both phones with me, leaving a 4 and getting to Aylesbury just before 4.30. I was pleased that my Android Auto was working with my new phone and also by the time we had got to Loughborough at 6.30, WhatsApp had sorted itself out. I had a full car in the end, both Anwar's son Hicham and Wycombe drummer Tho tagging along. We stopped at Istanbul Kebab, a couple of miles away from the ground for food. I was disappointed that the Shami burger I wanted was unavailable but I got a half-pounder with doner meat meal for £6.50. It was huge and very decent, even if not amongst the best that I'd had. We were at the ground 20 minutes before kick-off although the queue at the turnstiles took ten minutes due to lack of change. I helped them out with the exact £5 which included a programme. 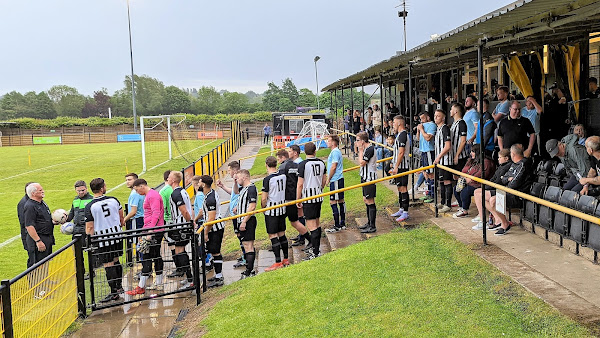 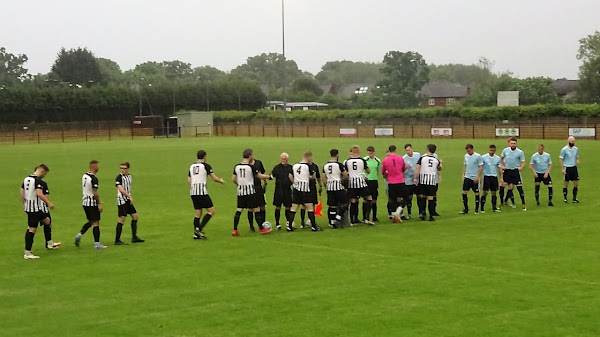 Allexton & New Parks started their cup journey with a 4-2 win over Bottesford on 17th November. Next up were Loughborough who they defeated 4-0. They beat Hathern 1-0 before triumphing 5-3 on penalties against Friar Lane & Epworth following a 2-2 draw. Burbage Old Boys started out with a 3-0 win at FC Khalsa on 13th November before a 2-0 win over Highfield Rangers. They won then 7-6 on penalties at Desford following a 2-2 draw before a penalty loss at AFC Kilworth following a 3-3 draw. However, they were reinstated as North Kilworth fielded an intelligible player. Allexton & New Parks would be the favourites having finished as league runners-up whilst Burbage Old Boys had done remarkably well to be here, having finished as runners-up in Division 1 and had the trickier route to the final. There has been drizzle on the way in, but the heavens really opened when the game started. The pitch though was in excellent shape and coped well with the deluge. The game kicked off early at 7.27 and Allexton & New Parks in the black and white stripes made all the early running. They hit the woodwork on 23 minutes, the ball bouncing off the top of the bar. The 33rd minute saw them take the lead. It was unfortunate for Burbage Old Boys, playing in sky blue as the ball was blasted at a defender who had little opportunity to avoid the handball. The resulting penalty was converted by Brandon Jarratt. The rain abated a bit but was soon back, the wind blowing it into the covered stand along the side. The first half had been pretty one-sided but the second period saw Burbage start well. They got their equaliser on 50 minutes, a great through ball finding Andrei Graur who slotted past the advancing keeper. The game continued to flow from end to end but it was a winner a few minutes from time that made it 2-1 to the favourites.  A set-piece was spilled by the Burbage keeper who had an otherwise excellent game. Allexton captain Jake Wain was on hand to follow up and seal their second successive league cup win. 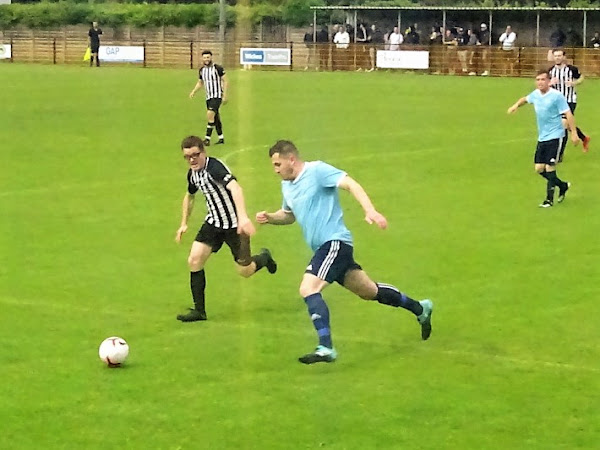 There was a trophy for each player that took part and medals for the officials as I'd seen the committeemen unpacking onto the table below where we were standing. It had been a really decent game and although the late winner was cruel on Burbage Old Boys, the result was the right one on the balance of play. The catering at the ground looked very nice, especially the chips but I was already full. An official attendance of 300 was given, although it looked a lot more due to the cover being packed due to the rain. It was a fairly early getaway around 9.20 and although the roads were good to us on the way, closures meant a few miles and time added onto my journey as we had to go cross country from Daventry through a load of places I'd never heard of. Fortunately, there was no wildlife on the loose, aside from a rabbit that would have made a nice tasty dinner, had I not avoided it. Greatest Hits Radio provided the soundtrack as ever with some great tunes. I also got the guess the year right, thanks to the hint about 'new Coke'. I dropped Anwar and Hicham off at 11.10, Thomas off at 11.20 and got home myself at 11.40. After a reasonable night's sleep the previous night, I wasn't able to get to sleep until after 2, though I was fine the next morning, having never been a big sleeper. 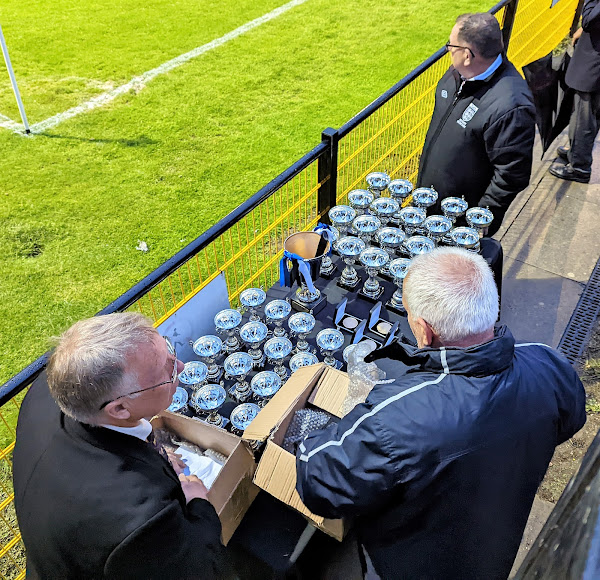 THE GROUND
The NANPANTAN SPORTS GROUND or NEWTON FALLOWELL STADIUM as it is currently known for sponsorship purposes is a decent venue to watch football with no prefabricated stands. The main covered accommodation is behind the goal, this has seats at the front (around 200) and more covered standing at the back. There's also a covered raised area by the corner where you go in and this offers a great view of the action. There's also an area of cover on one side, this holds about 150. Aside from a few steps of opening terracing and grass banking, it's flat standing although the ground does have lots of character.
There's not much in the immediate vicinity of the ground but the food at the ground looked great. There's also a basic bar and a range of merchandise. Other facilities include a large car park which would cope with most crowds and a secondary, partially railed pitch that would probably be worth a visit in its own right. 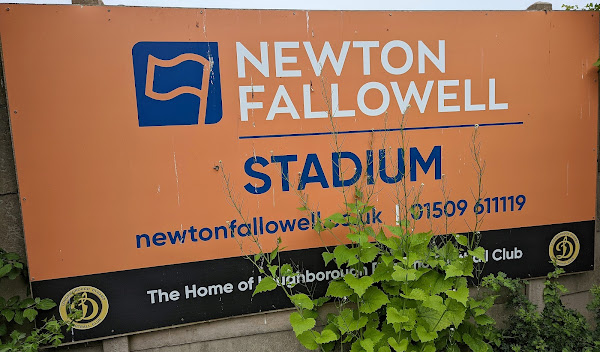 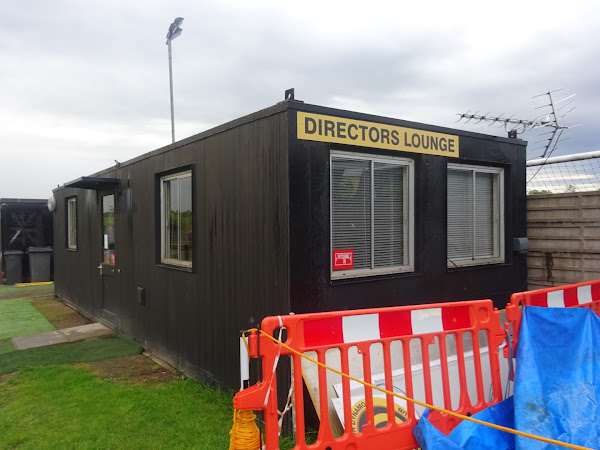 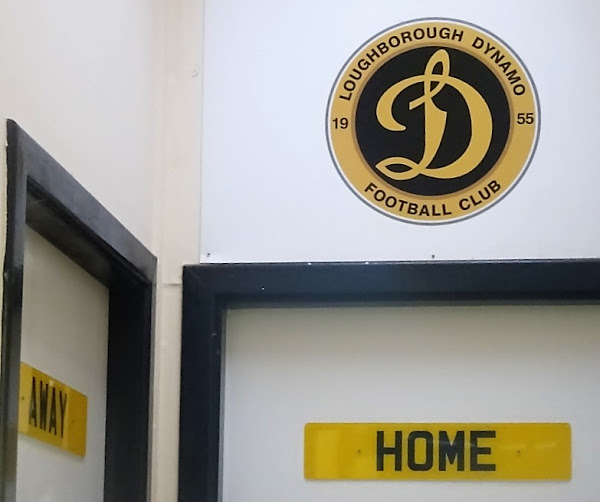 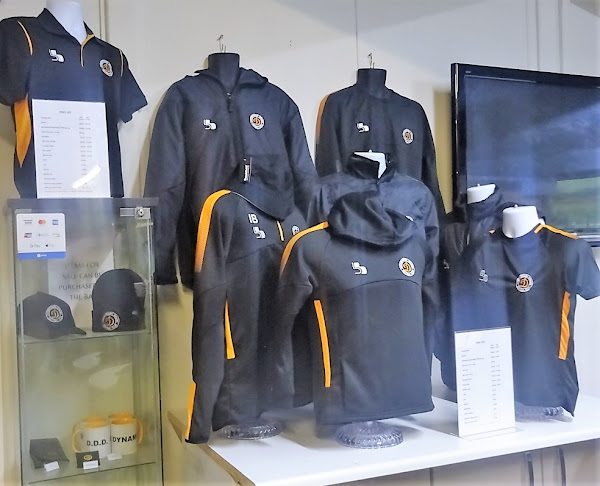 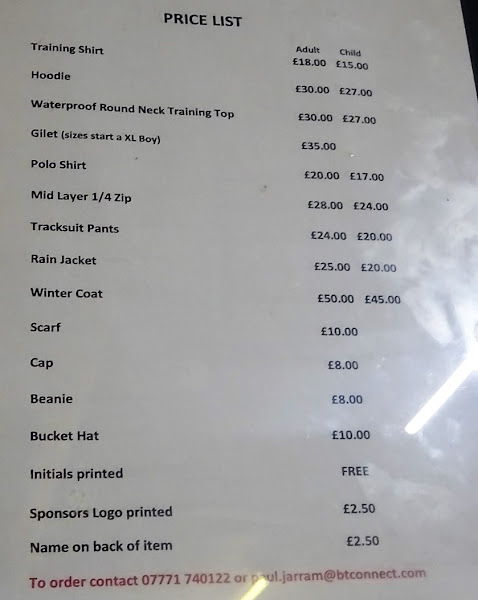 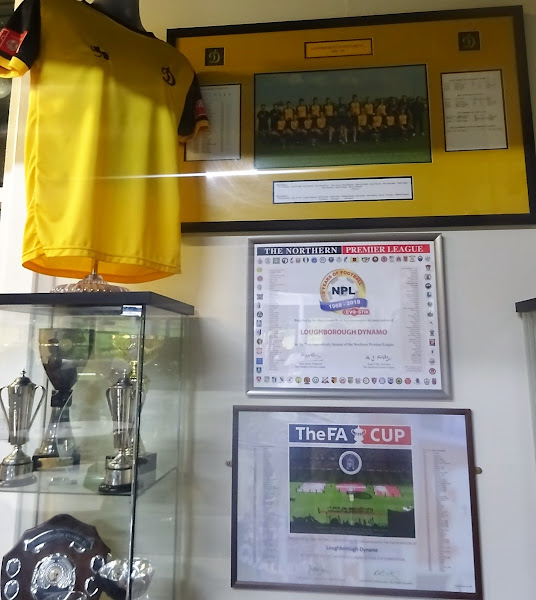 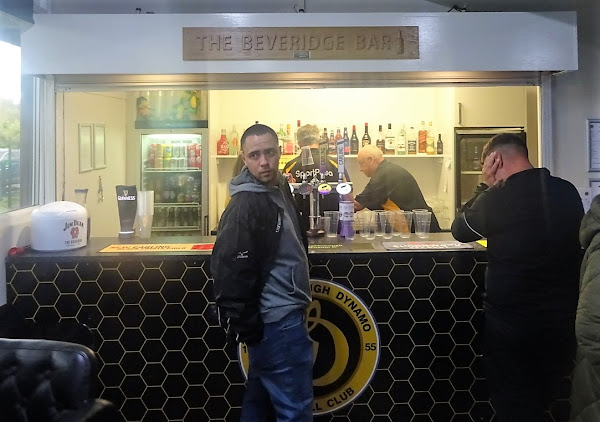 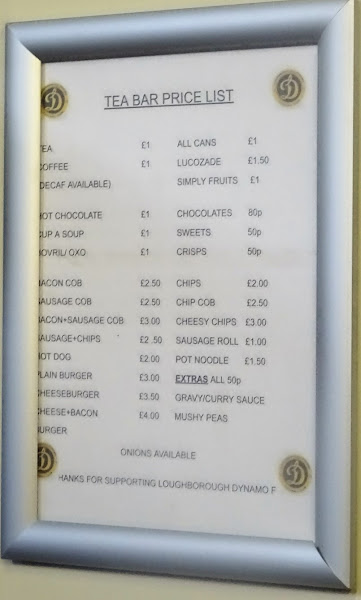 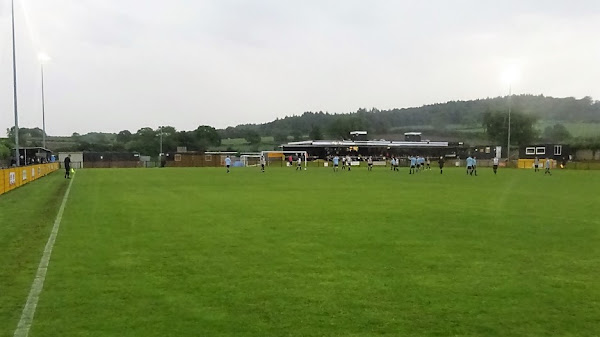 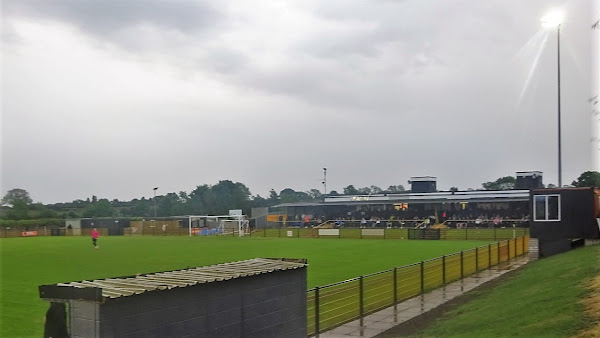 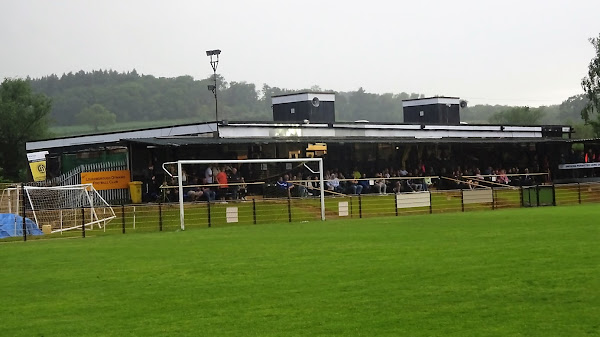 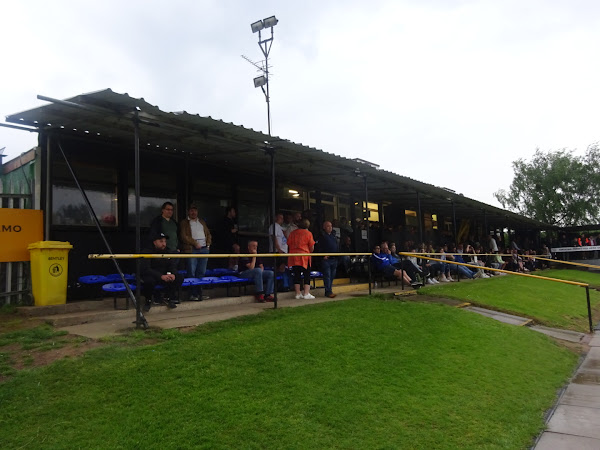 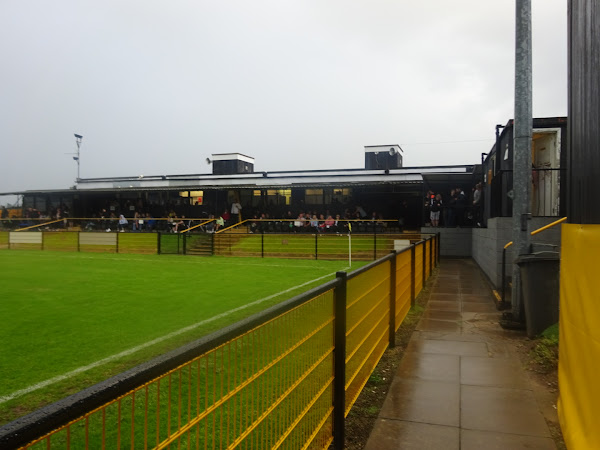 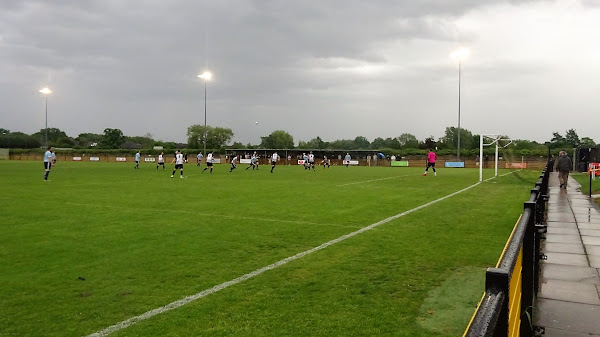 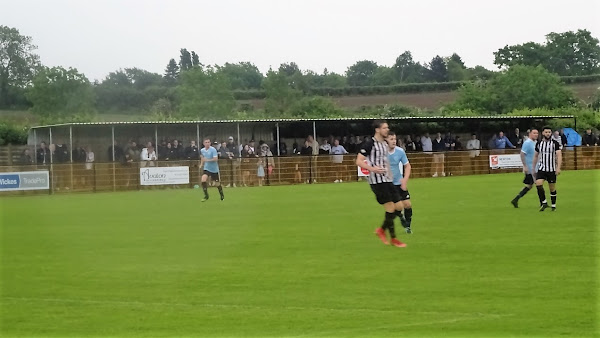 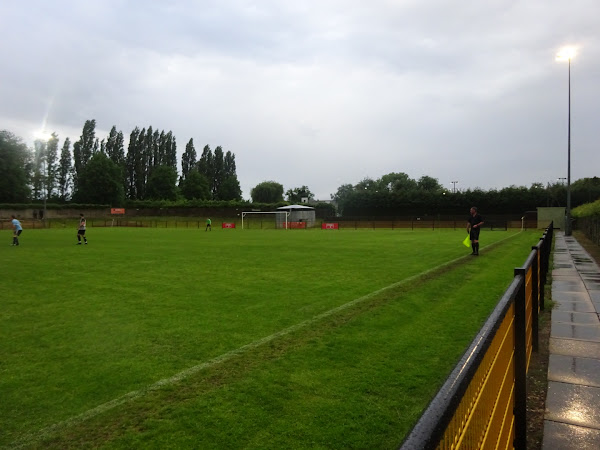 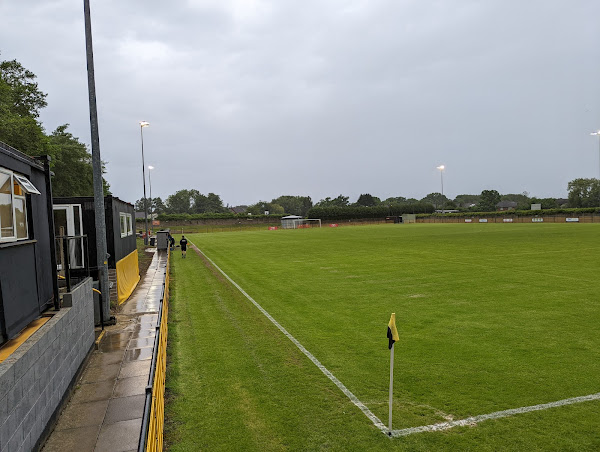 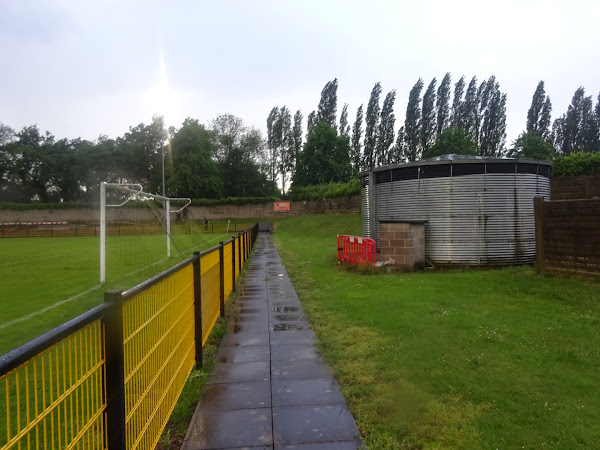 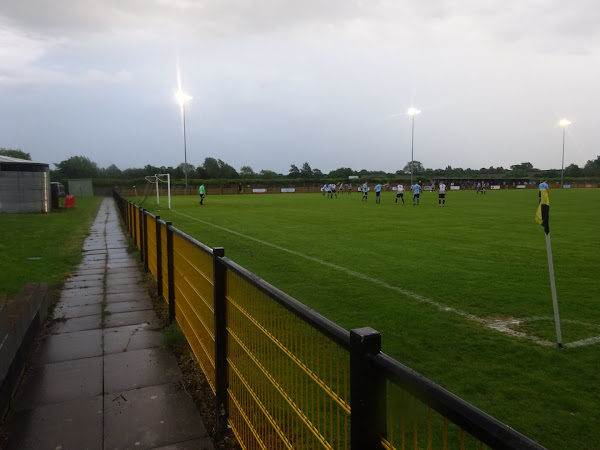