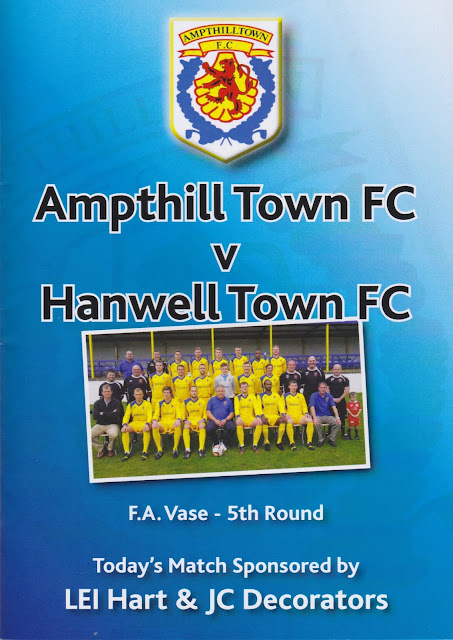 Wycombe's long wait for a win continued with 2 draws since I last did a groundhop. Firstly on Saturday, we drew 0-0 with Accrington in an uninspiring draw. After that, I was convinced that we would be playing non-league football next season. I couldn't see us getting anything out of Fleetwood at home and Torquay were at home to Northampton in the battle of the bottom two. If they won and we failed to, they would move above us and dump us in the relegation zone in the process. As it happened a much-improved performance saw us draw 1-1, which I would have taken beforehand. And Northampton came out of the game with a win to move them within 4 points of Torquay. We still have a battle on our hands though, and with only 1 win in the last 18 games, it will be a fair while before we can dismiss my initial thoughts as cynical negativity if indeed we can at all. Off the field, the trust announced their intention to bring in external investment which would see a large percentage of the club go to a mystery consortium, but the ground and club memorabilia would be protected, and a few other stipulations would have to be adhered to. More news will come out next week, before the idea is voted on at the Trust AGM on 26th February. I had a very long, busy and tiring week at work. I was looking forward to some Friday night football, a rare treat on my favourite day to watch football. I ran myself into the ground at work, as it was the busiest day of all and I needed to meet Laurence, who I was going with, in Oxford at 2. I even cut short my break at work to get off as early as I could. Finally, at 1.10 I had finished my duties, quickly got changed and went up the motorway to Headington near where he lives. I was just getting my things together when I  got a phone call to inform me that the game was off. Laurence had made contact with the Bangor secretary and he informed him that it would not be on. I had expected it and had made the first leg of the journey more in hope than expectation, but at least we hadn't wasted any more time and money. 90 minutes later it was called off officially so it was good to know early. I couldn't even console myself with a pint and lunch at the highly-rated pub The Masons Arms (our agreed meeting point) as it didn't open till 5PM. Instead, I made my way home and watched Twitter as multiple games were called off earlier. I was pleased to see that my first choice - Ampthill Town v Hanwell Town was not one of the casualties and the home club remained optimistic that it would go ahead.

Several games had already bitten the dust, including Wycombe's game at Cheltenham. Looking on the bright side, following our 2 draws and no midweek game, we would be a fortnight unbeaten come next Saturday's game at home to Chesterfield. Ampthill was going to be on according to my groundhopper mate Jim, and also the away team Hanwell Town, but I was waiting for official confirmation from the home side before counting my chickens. The game was officially confirmed on at 10am and I was buzzing for some proper cup action. I still didn't know whether I would have any passengers, but just as I typed this line, usual groundhopping partner Anwar called to say he would come. The plan was to leave at 10.30, meet Anwar at 11 and go into Aylesbury before heading off to the game. I had spotted a nice pub in Ampthill called The Albion and would find somewhere for lunch too. I was very much looking forward to my 80th game of the season. Hanwell had special significance for me, as they were the closest team to where I was born - the now-defunct Perivale Hospital overlooked the ground. I finally visited there a couple of seasons ago for a pre-season friendly against Wycombe. They had reached this stage by beating London APSA, Great Yarmouth Town, Lordswood and at the 7th attempt after several postponements Ashford Town. The tie was only played on Thursday beforehand so it wasn't helping them get the best preparation for this game. I had never been to Ampthill before, but they got this far with victories over Barking, Beckenham Town and Norwich United. 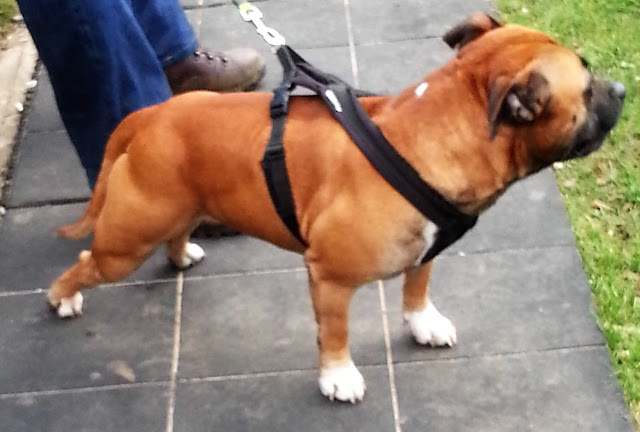 I left home as scheduled and went to Aylesbury, picking up Anwar en route. We went into town and Anwar got the Mario game that he wanted. I didn't buy much, just some food and drink to take to football. It was 12 when we left and after an hours drive, we were in Ampthill. I had earmarked a half decent pub. The Albion as I knew they made an effort with real cider. I had a pint of Weston's Traditional Scrumpy which I had not had for a while and relaxed while I found out all the latest on Facebook. We saw a bloke in an MK Franchise shirt and loudly discussed and criticised his club. When we left he ran out after us shouting something. I thought 'here we go' but all he wanted to tell us was that our (Wycombe's) game was off. We went to the chippy which at first sight seemed pretty naff with tiny portions. Again I spoke a bit loudly about it and we turned out getting a reasonably sized one. They were decent chips too from proper potatoes as opposed to the frozen cash and carry ones that a lot of chip shops use. 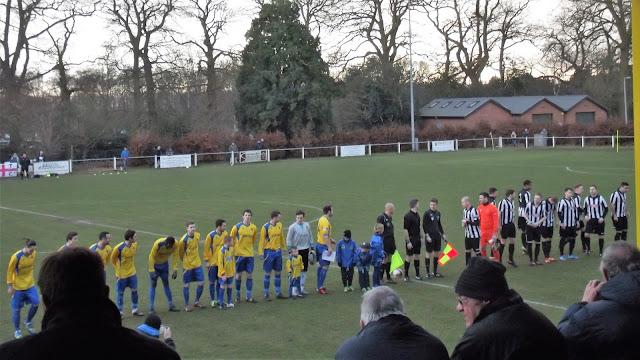 We then made our way to the ground. A nice touch was that the programme was included in the price of entry, which was £7 for adults and £3 for concessions. I was still peckish so I had a burger, which was half decent and was only £2. I was in fat bastard mode, having a chocolate bar, some crisps and a slice of rocky road at half time. It was a hell of a game with plenty of great goals, a punch up that saw 3 players sent off, and a bit of crowd aggro which saw a female steward throw 5 blokes out. There were huge celebrations at the end of the game, with Ampthill winning 3-1 after extra time. I was pleased to meet a few people I know at the game. Firstly I met Jim the Northampton fan as arranged. He turned out to be a decent chap as you'd expect. I also met fellow groundhopper and Wycombe fan Dave Finch as well as around 10 Wycombe fans including Lana, Ben and Howsy. So, all in all, a very sociable and entertaining day. Due to the extra time, we didn't leave Ampthill till 5.50 and it took a tiny bit longer to get home, thanks to slow people on single-lane carriageways. I was still home just after 7 though, after dropping Anwar back at his. Sadly I didn't have any TV football to look forward to as it was on at the stupidly late time of 11.20 - ITV continuing their woeful management of football coverage, much to my annoyance.

WOBURN STREET is a ground that is typical for this level. There is just the one stand, though it is one of the bigger ones at this level. It's a mixture of seating and standing although on my visit everyone stood so we could fit more people in there. I reckon there were a good few hundred in there at it's fullest point. It does have a bit of a design fault though - when you sit in the front row of seats the view of the pitch is blocked by the railing. It is a nice design though and beats the prefabricated ones you see at so many grounds nowadays. The rest was open standing.

The programme was a bargain - free. It was well presented and printed on excellent quality paper. There wasn't a huge amount of stuff to read in there, and it could have done with some stats - like how the 2 teams got to the 5th Round of the Vase, but you can't complain for free I guess.  The bar was quite basic with only Magners and Kopparberg bottled cider plus other drinks. There was a half decent range of merchandise but it seemed expensive, probably due to companies charging them a lot for small orders. The tea bar was the best bit with a wide range of items at good prices. The town is a short walk away and the Albion pub is a pretty good bet if you like your real ales and ciders. 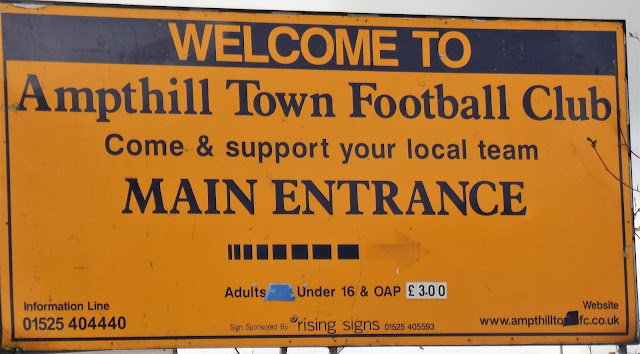 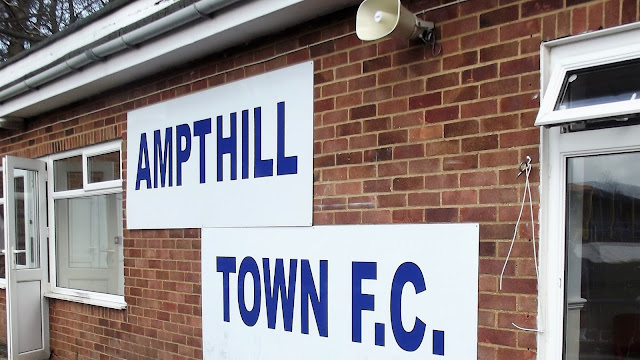 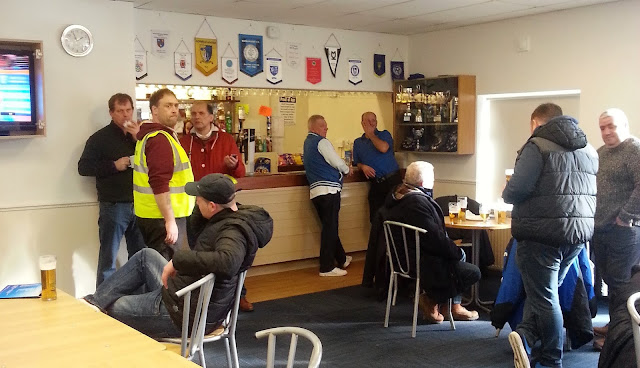 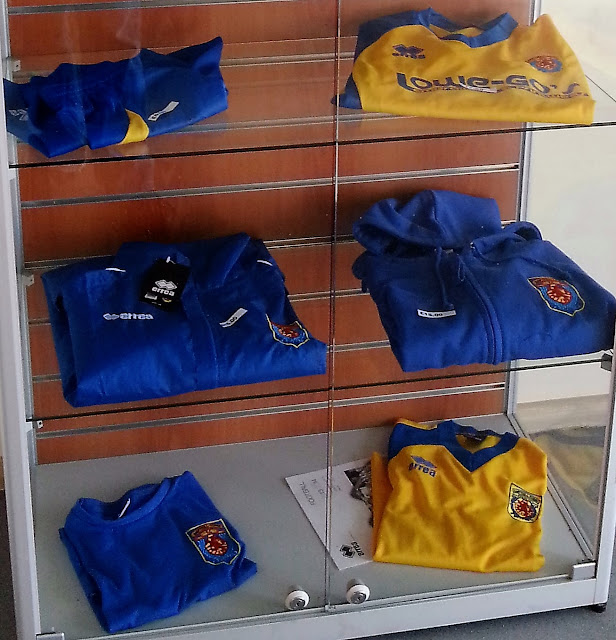 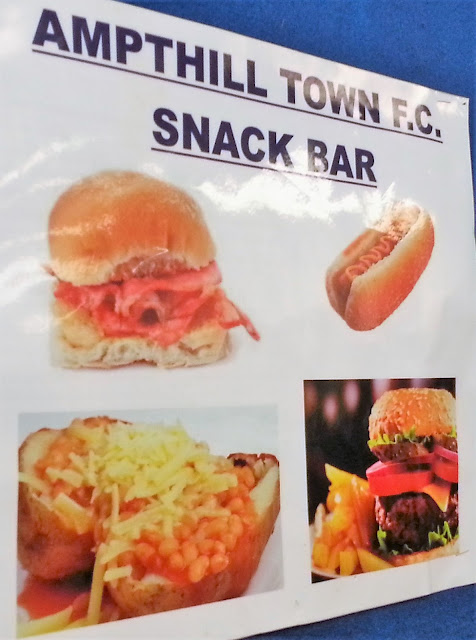 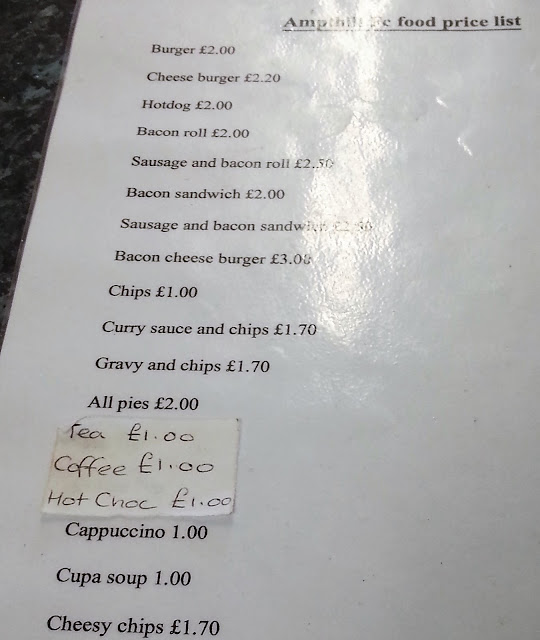 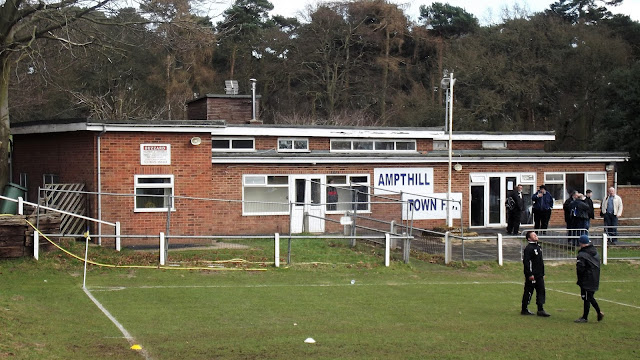 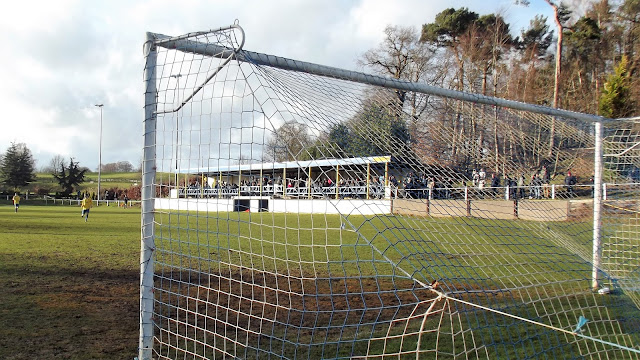 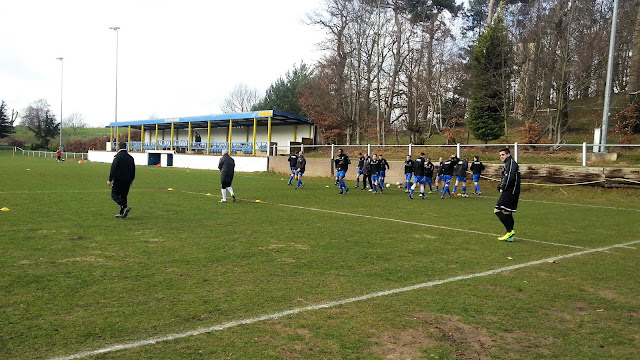 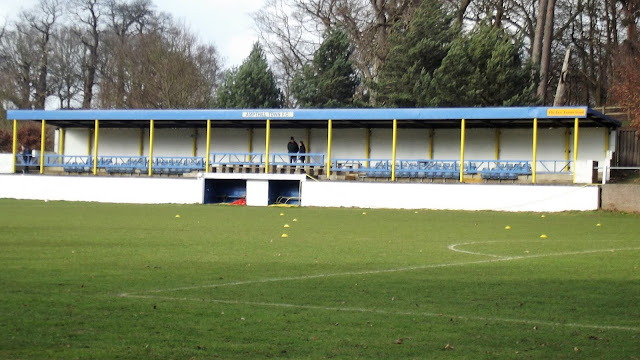 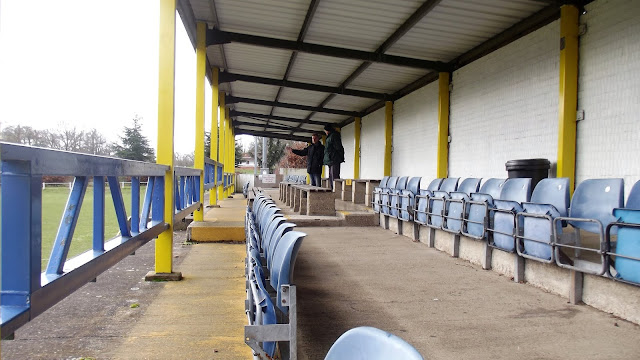 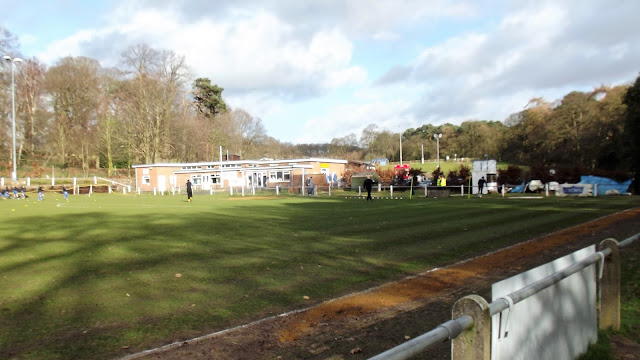 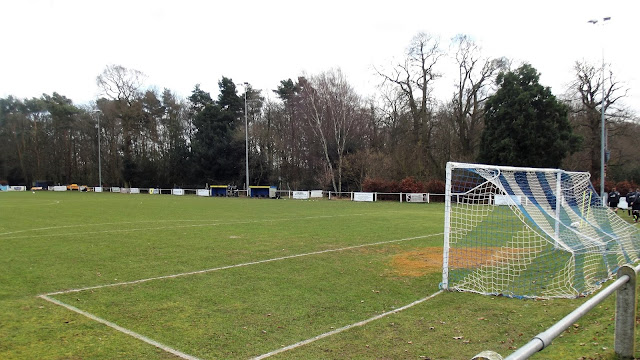 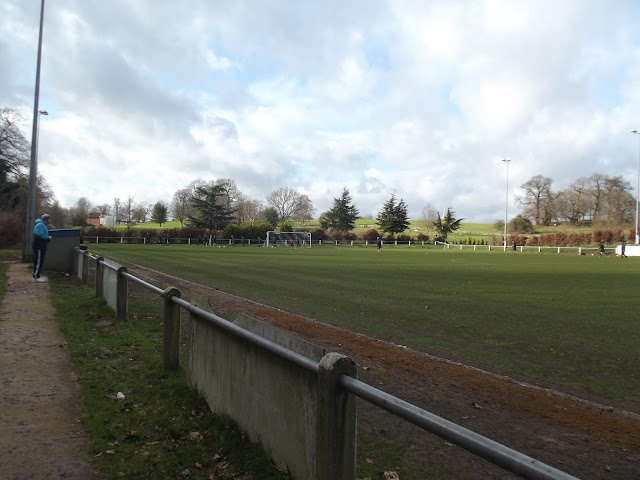