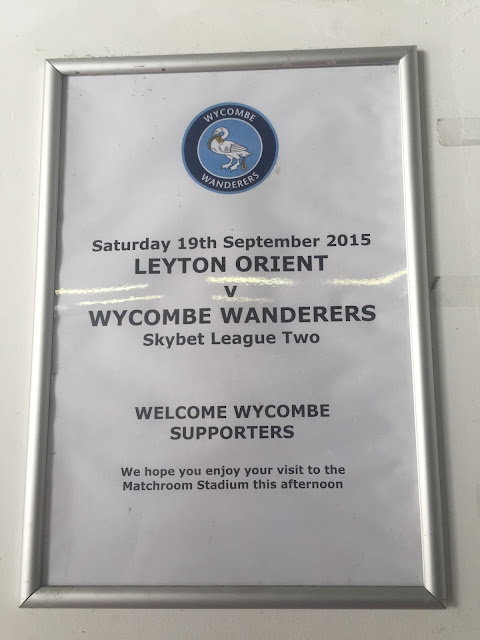 
Leyton Orient were founded in 1881 as EAGLE CRICKET CLUB and have been known in various guises down the years. The pinnacle of their success came in 1963-63 when they reached the top tier of English football, but finished bottom and were relegated back to the Second Division, although the 60's and 70's were their best period when they were pretty much a constant in the second tier. They reached the semi final of the FA Cup in 1978, but lost 3-0 to Arsenal in a match played at Stamford Bridge

To most people though the club will be most famous for the mid 1990's Channel 4 documentary where they struggling financially owing to chairman Tony Wood's own financial issues. They were struggling on pitch too, right near the bottom of the league sand without an away win in a year, a run which they ended beating non league Tiverton Town. Manager John Sitton's rants were memorable, challenging players to fights, and telling them to 'bring your f*cking dinner with you, because by the time I've finished with you, you're gonna need it' They recovered under snooker supremo Barry Hearn, and can count Bob Mills, Daniel Mays and Andrew Lloyd-Webber amongst their fans. 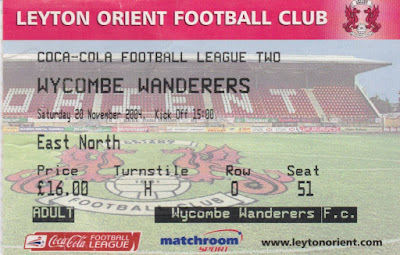 My first visit to Brisbane Road came in November 2004. Wycombe were still reeling from the poor form under, and departure of Manager Tony Adams. In charge were Keith Ryan and Steve Brown, 2 Wycombe legends who had the full support of the crowd. Wycombe had not won for 10 games and things looked bleak when Wayne Carlisle gave Orient a 28th minute lead from a free kick. After half time though, the game changed and it took just 3 minutes from the restart for Nathan Tyson to get the equaliser. And it was a huge weight off Wycombe's shoulders when Roger Johnson got the winner on 67 minutes. The match had a punch up after David Hunt was sent off for a high tackle on Tyson, but it was the 3 points that meant the most to the travelling support. 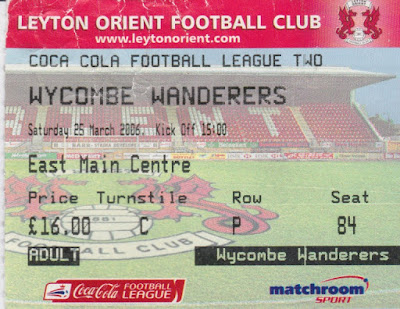 VISIT 2: ORIENT 1-0 WYCOMBE (L2 - 25/03/06)
This visit was memorable for all the wrong reasons. I'd been to Charlton v Middlesbrough on the Thursday night and had consumed a Chicken Biryiani that had not been cooked properly before the game. So come midnight I was being sick, had stomach cramps and was sh*tting through the eye of the needle. I was told by the doctor that it was due to the rice being reheated.

Anyway I felt like dirt, and come kick off I had not eaten for 36 hours at kick off time. But I was in the midst of a 7 year run without missing a game and there was no way I was going to miss this one. Though Wycombe put in a reasonable performance we lost 1-0 to add to my woes. Though at least I was recovering from my illness and I eat my first meal in 2 days when I got home. 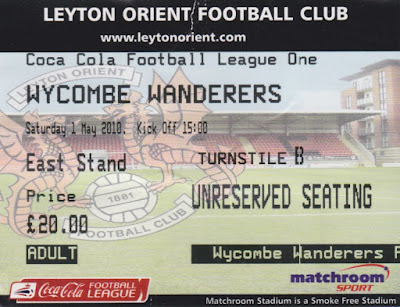 Wycombe had been taken over by Gary Waddock midway through this season, and had improved greatly after a dismal start under Peter Taylor who played dire football. The on pitch style improved greatly though the results took a while to improve. This game was our last chance saloon and though we gave the playoff chasing O's a good game we went down 2-0 and were relegated. The team were still given a good reception by the fans though at the end as we went down fighting, unlike our previous relegation under Tony Adams. 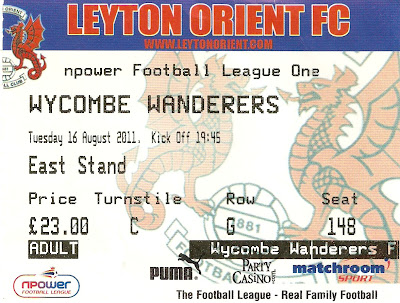 Wycombe gained their first win of the season at Leyton Orient, with goals from Ben Strevens, Joel Grant and Scott Donnelly. Orient were struggling at the time but fate would decree that they would stay up and Gary Waddock would get Wycombe relegated for the second time, amidst ownership troubles and threats to the ownership of out ground. Waddock took a much more pragmatic approach this time round and the football was not great - nor were the results with twin 6-0 defeats to Huddersfield Town - both live on Sky. This at least was a good day out, with me discovering the Punjabi Grill and having a couple of pints with fellow Chairboys in a local pub. 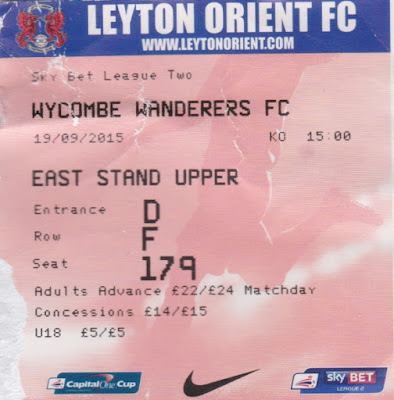 
On the day of the game I woke up at 8.30. I played Football Manager for half an hour before having a bath and getting some breakfast. By 10.15 I was ready to go and so after popping into Iceland and getting some diet Irn Bru and some chicken I parked up in a road around 5 minutes walk from Amersham station and caught the 10.49 train to Liverpool Street. Around an hour and a 5 minutes later I was at my destination and I walked the 5 minutes to Williams Ale &  Cider House and had a pint of Gwatkin No Bull. It was very nice but a little too sweet for my liking and it was very pricey at £4.80 a pint. Even at the Wetherspoons away from the station it was £4.10 for a  pint of Strongbow Dark Fruits. 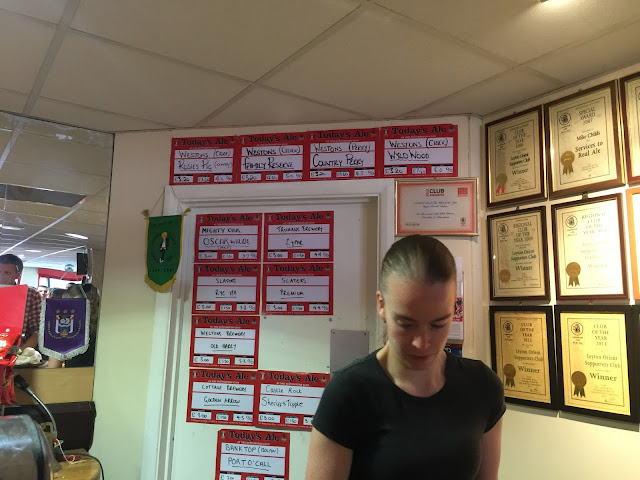 I'd had enough of expensive central London and so I got back onto the train and made the 20 minute trip to Leyton. It was 1.30 by now and so I went for a pint in Leyton Orient supporters club which was very good, even though they only did Westons (albeit 4 different types) After I'd had some Wyld Wood I went to get my lunch at an excellent establishment called Punjabi Dera. I  had myself a triple paratha kebab and meat samosa which was huge and cost well under a fiver. Just before 2.30 I finished up and went in ground. 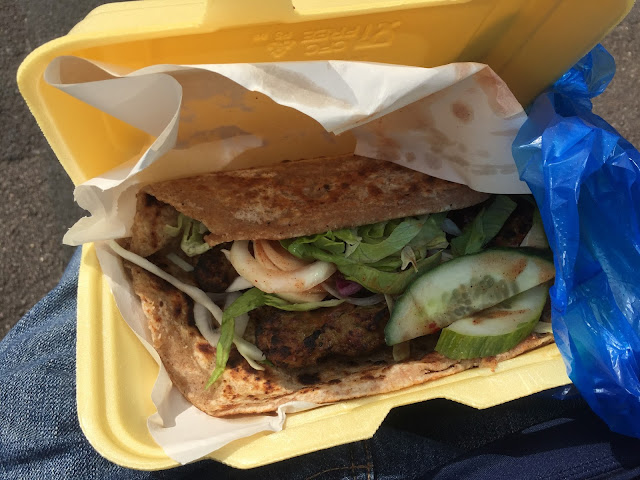 The game was very good and Wycombe were unlucky to only get a 1-1 draw. They dominated the game for the most part and led through Matt Bloomfield's goal on 40 minutes. They had several chances to extend their lead but didn't take any of them. Orient scored on the break through Jay Simpson and had their best period after this. Proceedings were temporarily halted as someone sat in the Orient home end invaded the pitch and for the remaining 10 minutes looked the side most likely to win. Wycombe fans were in fine voice, singing loud and proud all game whilst their Brisbane Road counterparts only piped up once they had scored. 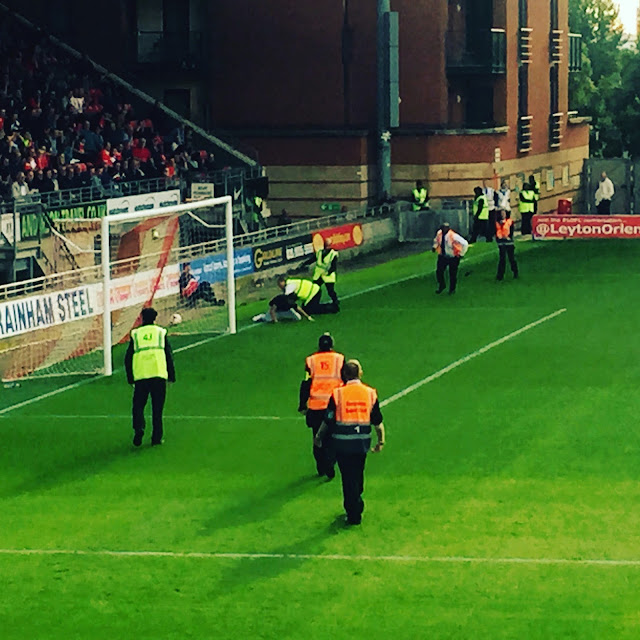 As ever it had been an excellent day out with decent and friendly opposing friends and club. I got straight on the train at Leyton station and was back at Liverpool Street by 5.30. Getting back to Amersham from there was a bit of a faff with a few train changes and it wasn't until nearly 7.30 that I got back to Amersham, getting home just before 8. I was back at work so I had a couple of drinks before watching Match Of The Day and going to sleep. 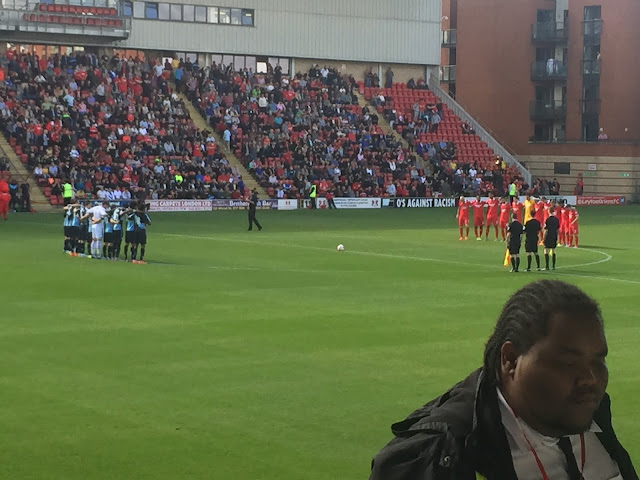 BRISBANE ROAD is a smart modern ground that still retains some of the character and charm of before it was rebuilt for modern football. It is now all seated and has flats in each corner of the ground, so that the residents can watch the game for free. Being an older ground that has been rebuilt, there are a lot of takeaways and pubs around the ground. The pubs are the usual fare, but there is an excellent takeaway called the Dera Punjab Grill which does all sorts of kebabs, curries and Indian food at great prices. There is also an excellent supporters club which costs £1 to enter, but buy a couple of pints and you will have made that money back on the cheap pints. They do a number of real ales, plus ciders from Westons.

Overall it's a cracking day out with decent friendly supporters and plenty of choice to eat, drink and be merry.

WEST STAND (under construction in 2004) 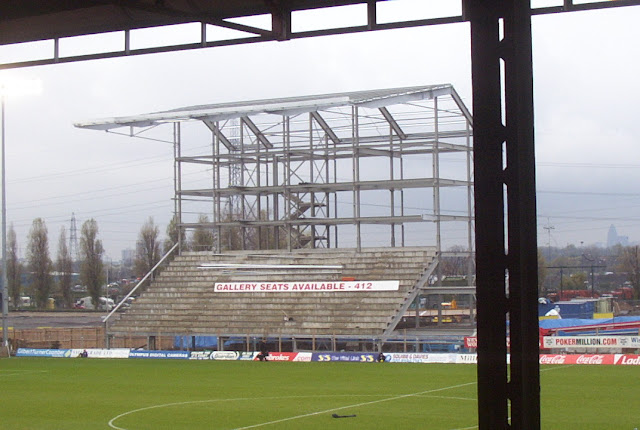 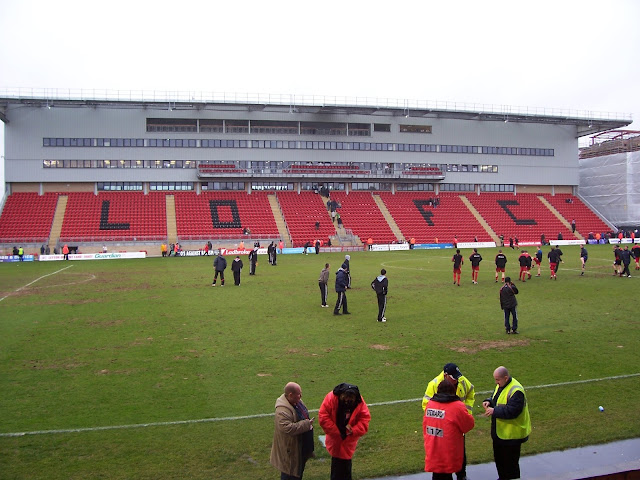 NORTH STAND (Under construction in 2004) 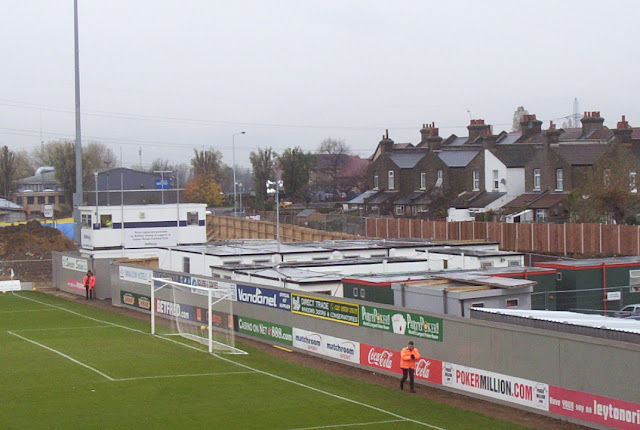 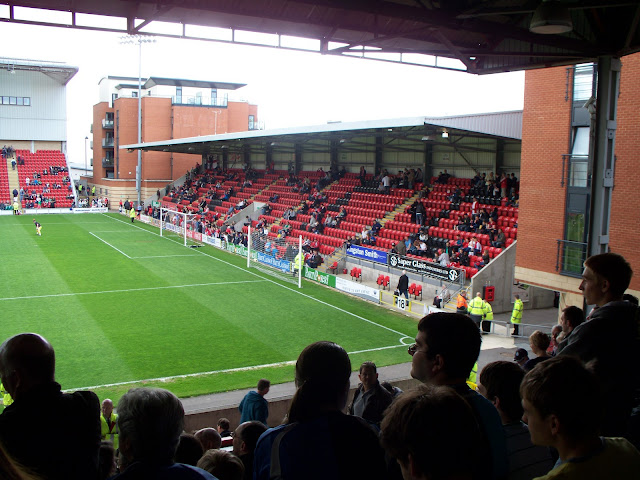 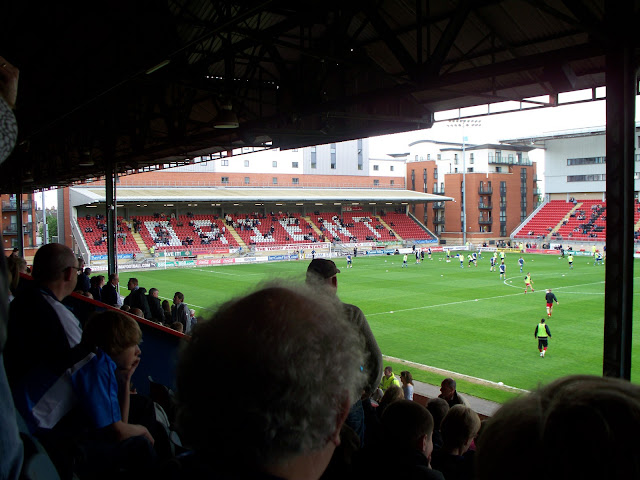 EAST STAND (Away fans get South side) 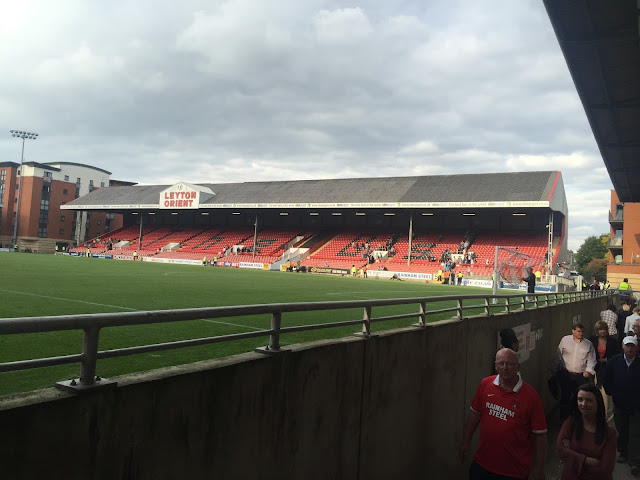 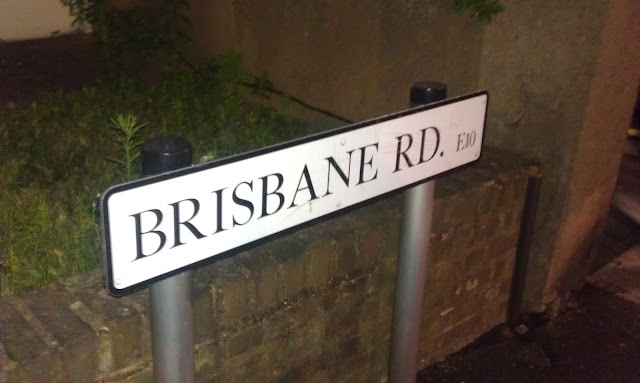 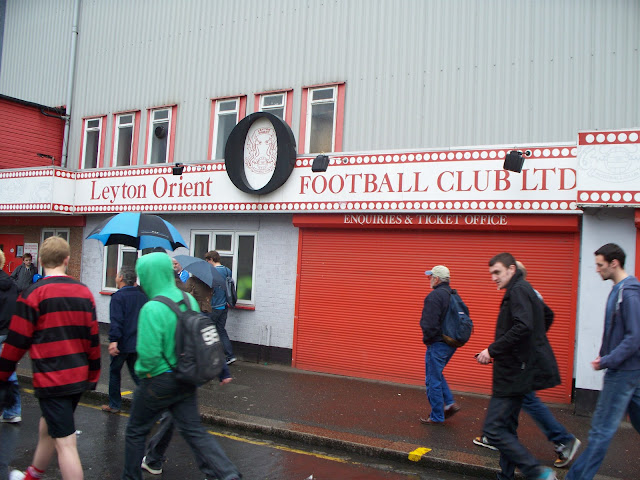 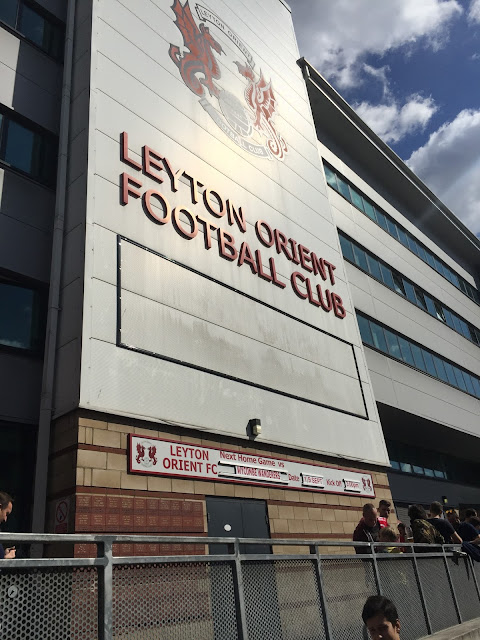 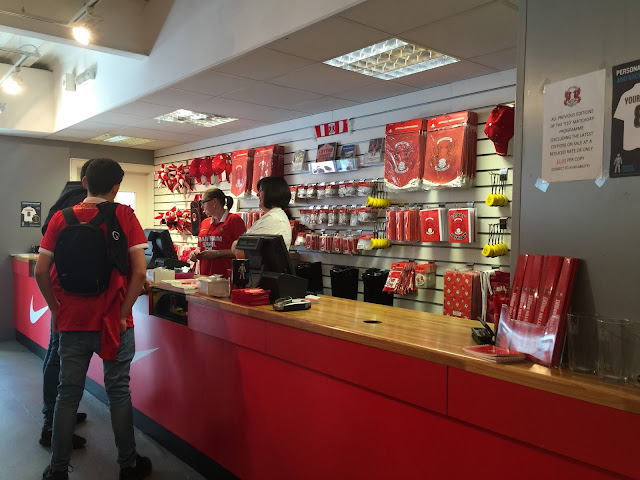 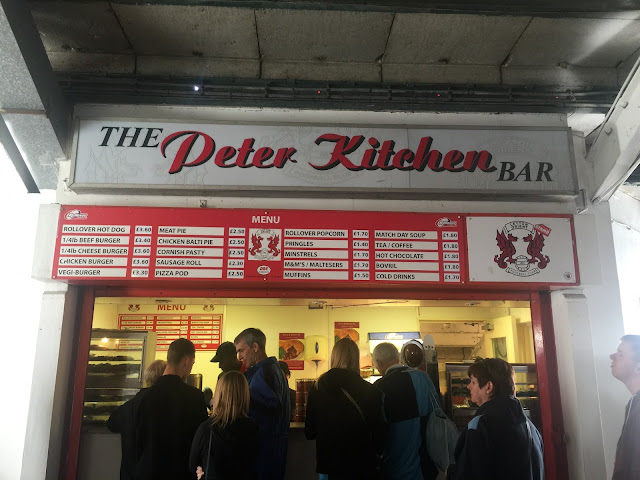