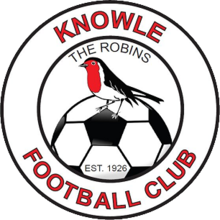 Knowle FC
The Robins Nest
Hampton Road
Knowle
Solihull
West Midlands
B93 0NX
Official Website
Twitter
Ground Number: 956
Tuesday 18th May 2021
Knowle 2-1 Alcester Town
PCL Charity Cup
KNOWLE FC - A BRIEF HISTORY
The club was established in 1926 under the name Knowle Men's Institute. They've played at the same venue on Hampton Road since their inception, a site they also share with the local cricket club. Their early years saw great success in local leagues and cups, most notably the league and cup double in the Birmingham Youth & Old Boys Amateur Football Association in 1947. By that time, they had reverted to their current name of Knowle FC. In 1966, they joined the Worcestershire Combination Division 2. The league changed its name to the Midland Combination in 1968 and that year, Knowle were runners-up. They were promoted to Division 1 and stayed there for nearly 30 years. The league changed its name to the Premier Division in 1983 and despite finishing bottom of the league three seasons in a row, they were not relegated. The club was also known as Knowle North Star between 1983 & 1986, though this wasn't an especially successful time on the field. Their best finish in what ended up sitting at step 6 was 4th in 1996. Two years later, despite a mid-table finish, Knowle were demoted due to lack of floodlights. They were runners-up in their first season back in Division 1 and also won the title in 2003, 2006 and 2008. The latter of these wins saw them go up to Division 1, thanks to a temporary groundshare with Studley FC. After a couple of mid-table finishes, the costs of groundsharing took their toll and they moved back home, meaning they had to drop down to Division 1. They've been at step 7 ever since and were runners-up in Division 2 in 2011. The club suffered a blow in early 2017 when 'Storm Doris' destroyed their clubhouse and covered seating which makes you wonder why weather people show such affection towards storms. The last two seasons have been cancelled by the Coronavirus Pandemic and Knowle were sitting in respectable placings of 2nd and 3rd in both years. 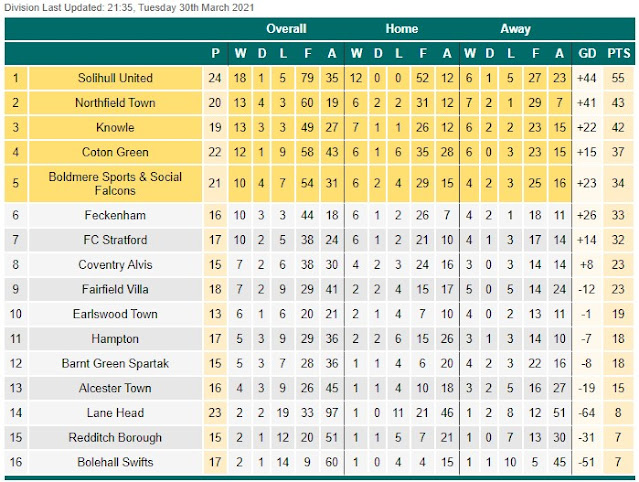 Back in the days when the FA Vase was more inclusive, Knowle spent several years playing in the competition. Their best run came during the 1981/82 season. Thay year they beat Oldswinford, Thringstone Miners Welfare, Wisbech Town, Halesowen Town and Middlewich Athletic to reach the 5th Round. They were within five minutes of beating Isthmian League side Barton Rovers, but two goals in the last ten minutes denied them a place in the Quarter Finals. Their opponents would go on to reach the final, losing to the current Football League side, Forest Green Rovers. They've seen a great deal of success in local cups and recent highlights include the Midland Combination Challenge Cup in 1997 and the Presidents Cup in 2008 & 2014. The large village of Knowle has a population of just under 11,000 and is situated three miles southeast of Solihull. It is situated near the Grand Union Canal and has a park as well as plenty of other green space. There are also a number of restaurants in the area, making it a popular dining destination. Hence it is one of the more affluent areas in the district and residents include comedian Jasper Carrott and businesswoman Karren Brady. 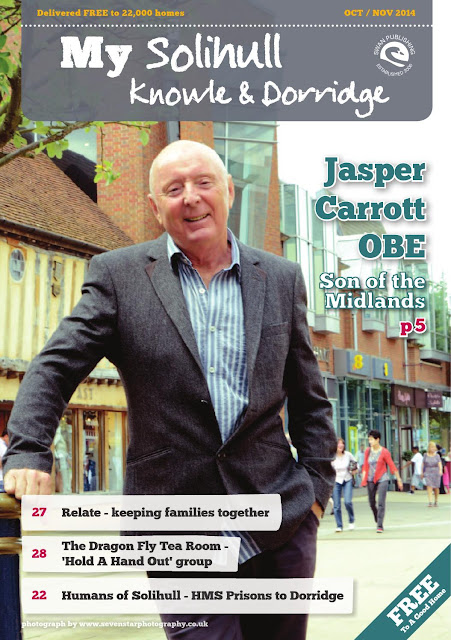 MY VISIT
With restrictions on going to football lifted, I was keen to see a game. Tuesday is always a dreadful night for TV and so that was as good a day as any to see a game. I was pleased when fellow hopper Anwar said he would join me. However, options were pretty limited, with a lot of leagues and clubs having packed up for the season. There were a couple of options in Northamptonshire as well as Friar Lane & Epworth Reserves in Leicestershire. However, the game we initially chose was Knowle v Alcester Town. Normally I'm keen to get clubs' history researched well in advance, but I held back this time. Too many times I've put work in only to see plans chance and neither club was tweeting anything on the day before the game. Thankfully, on the morning of the game, Knowle tweeted out that the game was going ahead. I was glad that they had, as the coverage of the competition had been a bit patchy, to say the least. I thought I was going to be stuck in all day when it started raining, but thankfully, it was only a brief spell. I'd had my Saturday and Sunday walks taken from me and consider them important, especially as my diet is not the best and I'm getting a bit of the middle-age spread. I walked to town and back, picking up a few things, including a pizza for lunch. By the time I got back, I'd walked 7.5 miles and burned 700 calories, undoing most of the damage. I spent the afternoon doing my research for tonight and watching TV and Youtube. 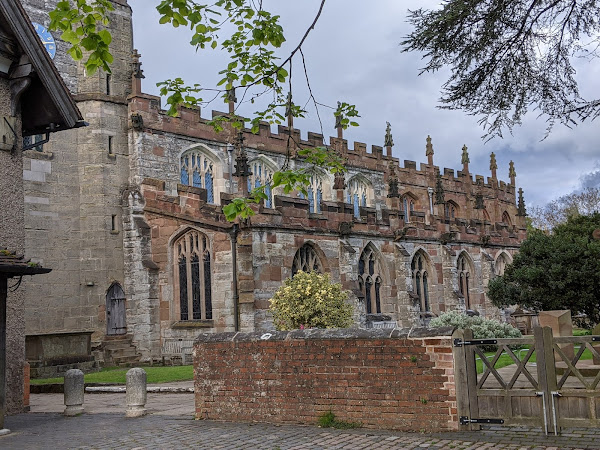 My research noted that apart from Fish & Chips & Indian, there weren't a huge amount of takeaways in the village. I was erring towards the latter and so packed a knife and fork in my bag, just in case. I left just before 4, before meeting Anwar in Aylesbury. We had a great journey up for midweek, though we met some truly disgusting weather going through Oxfordshire with horizontal heavy rain making it hard to see and everyone slowed down and put their hazards on. By the time we got to the Midlands though, it was hot and sunny and upon arriving at the ground around 6, the pitch looked fine. We walked into the pretty village and looked around. A newly opened Indian was advertising 20% off which would have been great had they not been charging twice the price of everywhere else. Instead, Anwar went to a chippy whilst I went to Cafe Saffron where I had Sea Bass Biran and a Keema Naan for the very reasonable price of £9.20. It turned out it came with rice and salad too, so I needn't have bothered with a naan. As it was something special, I didn't charge most of it to my football costs as it was all excellent. I got back to the ground with just under ten minutes to spare. Entry was a reasonable £3 and they also took details as per track and trace guidelines.

Knowle had restarted their season around a month ago and had beaten Hampton 3-0 and 4-1, Coventry Alvis 1-0 & 2-1, Redditch Borough 2-0 & Fairfield Villa 3-2. The only game they had lost was in tonight's reverse fixture as Alcester Town won 1-0 thanks to a 30-yard free-kick from Toby Scott. The visitors had beaten Redditch Borough 2-1, Fairfield Villa 4-0 and  Hampton 1-0 & 5-1. As a result, the two sides occupied the top two spots in the mini-league. The game kicked off a few minutes early at 6.57 and was end to end and competitive. Hosts Knowle started brightly and they look the lead on 15 minutes when the Alcester keeper sliced a clearance and it was a fairly simple chance for 'Corry' to put home. They doubled their lead on 27 minutes through George Seeley, a long-range effort that I didn't have the best view of as I was walking around to take cover from the impending storm. Alcester had their coach sent to the stands for questioning a referee decision and although they were second best at first, they grew into the game towards the end of the half. The home keeper did well to tip over a shot just before halftime as they began to press. The visiting gaffer was not happy and told his team so at the break. They vastly improved in the second half, amidst torrential rain. The visitors hit the bar and forced a great reflex save from the Knowle keeper on the rebound. The hosts had a goal disallowed for offside, but Alcester made it interesting with a goal back on 70 minutes, attacking down the left and then a finish from a tight angle. Knowle should have wrapped it up when the Alcester keeper slipped in the wet, though presented with an open goal, the striker somehow managed to shoot wide. The visitors might have made them pay, but the evening ended on a sour note for them when their left-back was sent off right at the end for a bad tackle. 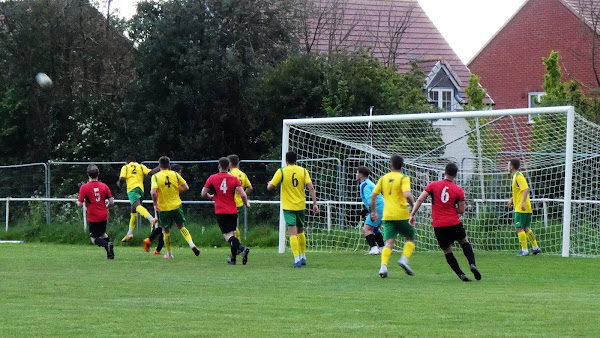 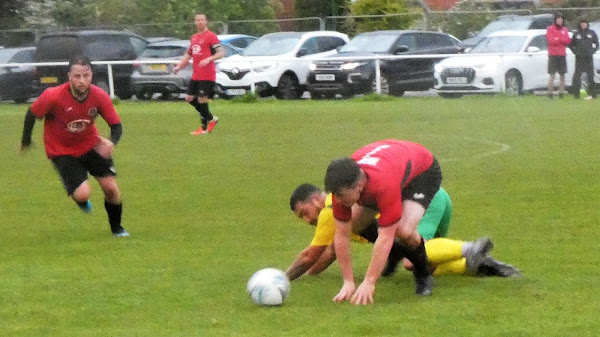 It was a narrow win for Knowle, but they just about deserved it. There were around 50 fans at the game, swelled by a number of latecomers from the Solihull Moors which had been called off due to a waterlogged pitch, right on kick-off. Their surface is a bit dodgy but the pitch at Knowle held up well and the referee was not one to call a game off it seems. Earlier this season, I'd seen Knowle at Redditch Borough where they led 3-2 at halftime, only for a picky ref to call it off. We left around 8.50 and had another good journey home, listening to Chelsea beat Leicester 2-1 on the radio, gaining revenge for the FA Cup Final result on Saturday. I dropped Anwar off at 10.10, getting home myself 25 minutes later. I decided to stay up and finish my blog as I was not tired and wanted to start planning for the weekend as soon as possible when my Football Traveller mag arrives tomorrow. I'm hoping for a game on Friday as I've never seen a game on May 21st and also a game on public transport on Saturday. The weather forecast will no doubt play a part as we have had a very wet May this year. 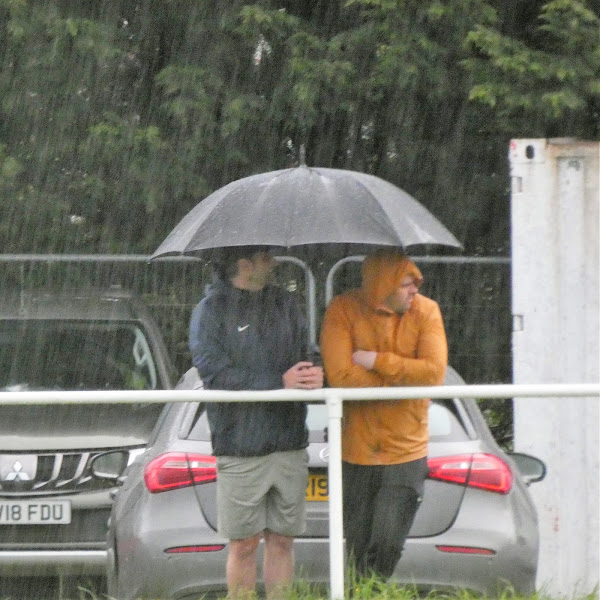 THE GROUND
THE ROBINS NEST is an excellent setup for step 7 and would grace step 5 if it had lights. There's a small seated metal stand for around 25 and the overhang in front of the dressing rooms has bench seating for around the same, plus some standing. To the side are some steps of covering, with a former cover. The pitch is fully railed with some more hard standing. There is a tea bar at the ground, though I didn't check it out. The village is a short walk away and has a decent range of places, I recommend the Cafe Saffron which was very good value for a takeaway. 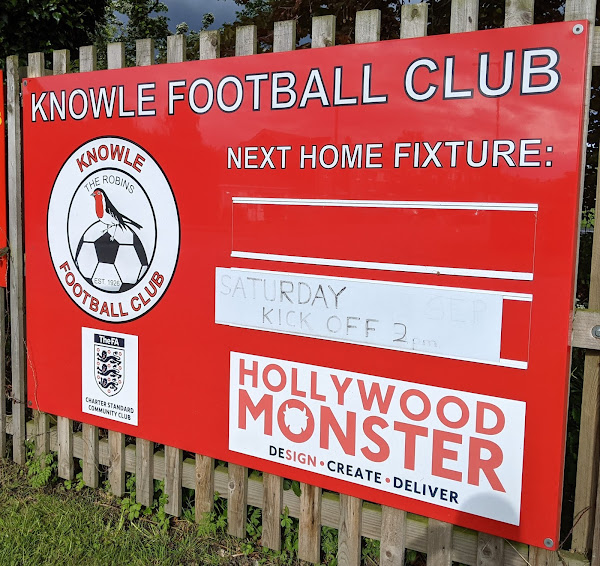 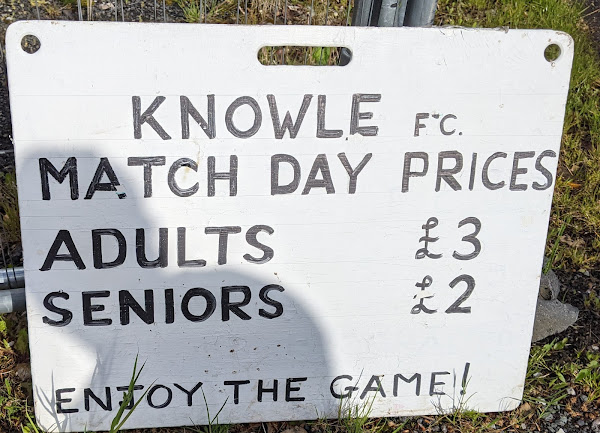 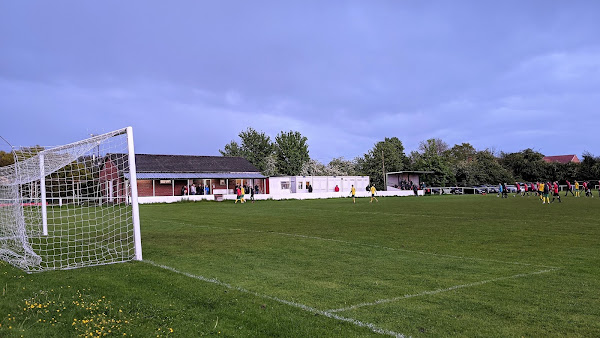 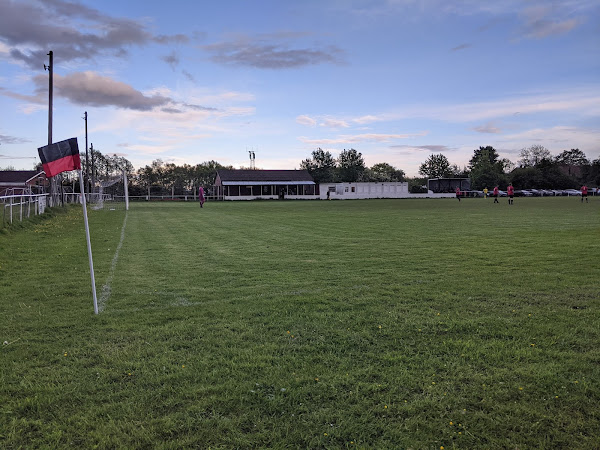 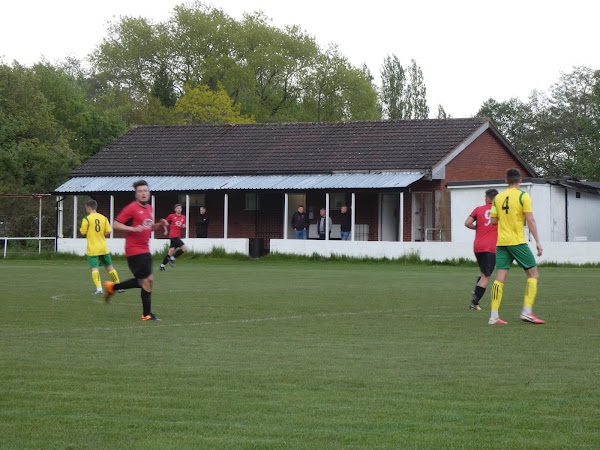 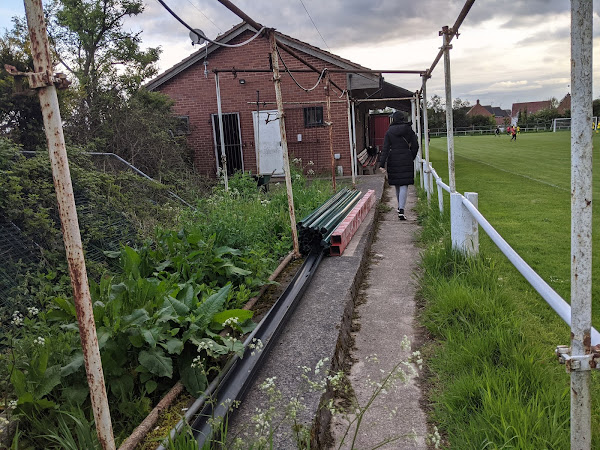 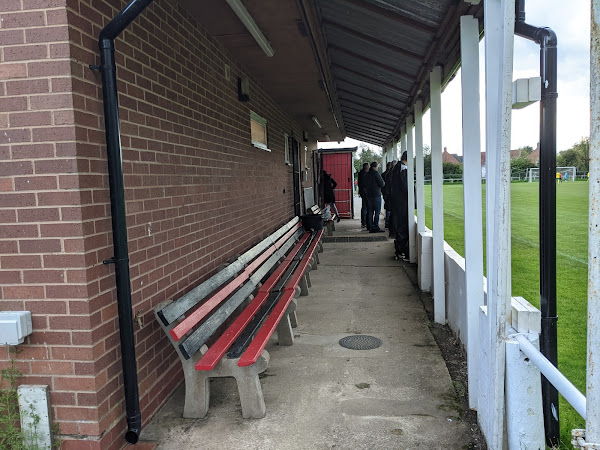 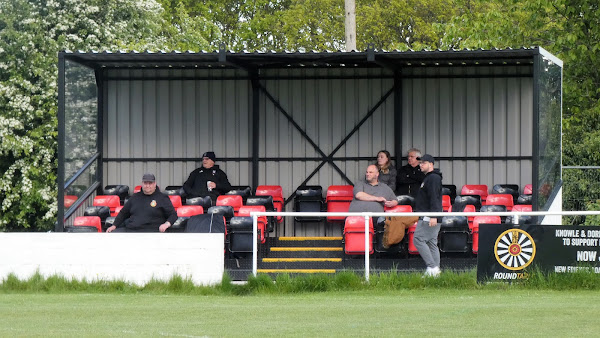 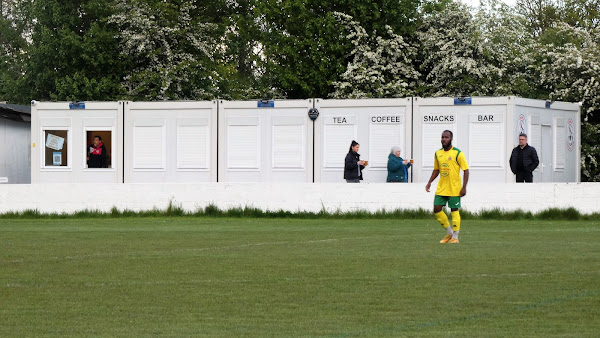 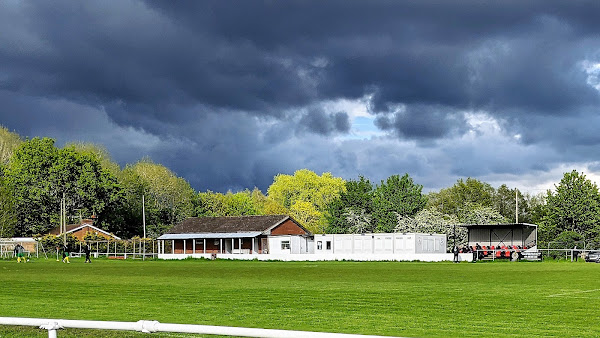 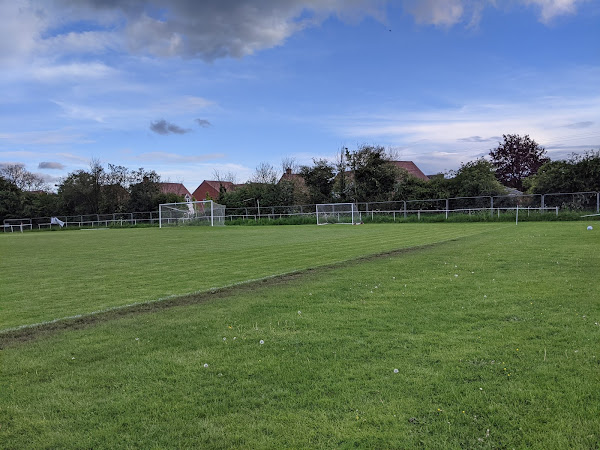 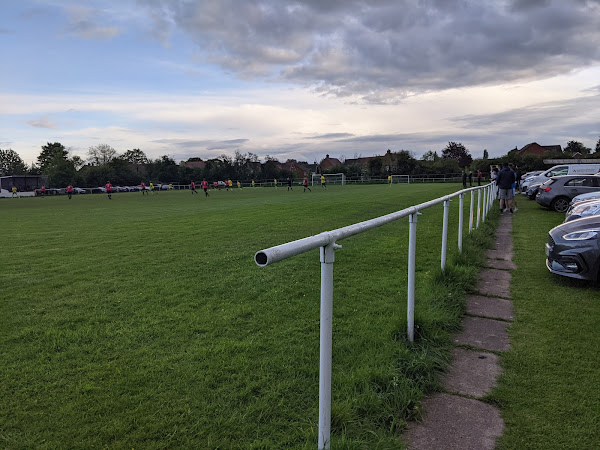 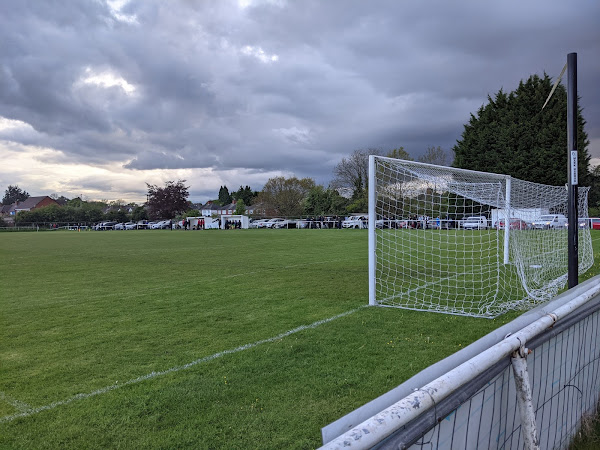 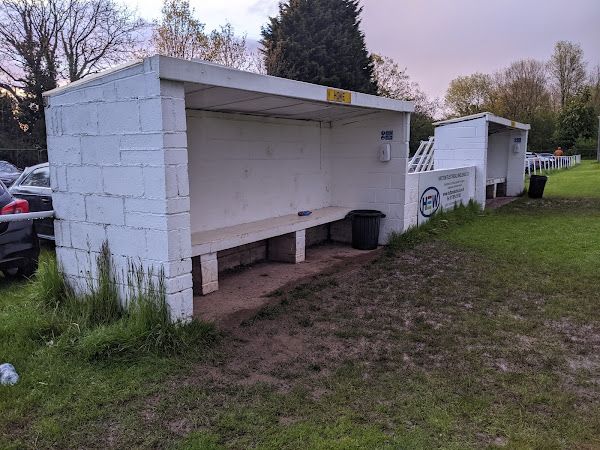 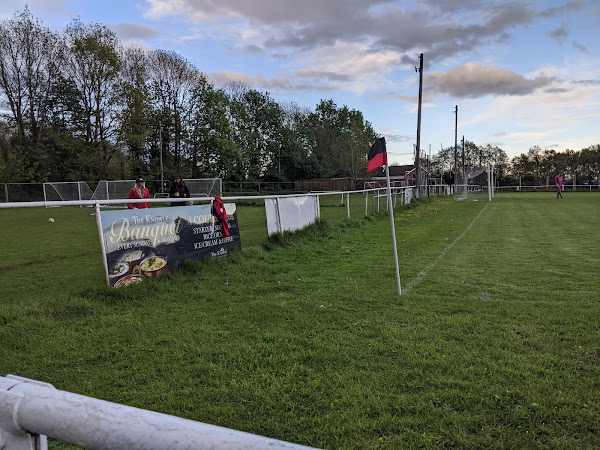 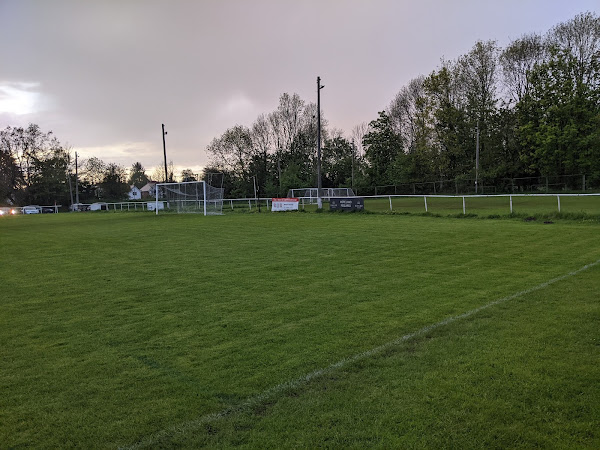