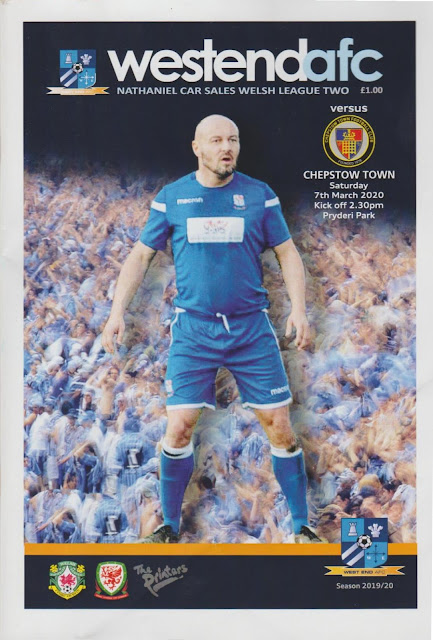 The club was established in 1964 in the Wellington pub in the west end of Swansea, inspiring the club's name. They started out in the Swansea League and were highly successful there, ever-present there from 1969 and winning the top tier (Division 1) on thirteen occasions. They made the step up to the Welsh Football League in 2005, winning Division 3 (level 4 of Welsh football) in their debut season. They coped with the step up well and in 2009 won Divison 2 to earn another promotion. In 2013 they lifted the Division 1 title but were unable to take promotion to the Welsh Premier due to insufficient facilities. This hit them hard with players leaving and the following season, they finished rock-bottom to return to Division 2. Since then, results have been thin on the ground and last season they finished second-bottom. With the establishment of the Cymru North and South, this meant effectively a relegation as Division 2 now resides a step lower at step 4 in Wales. West End sat in mid-table at the time of my visit. 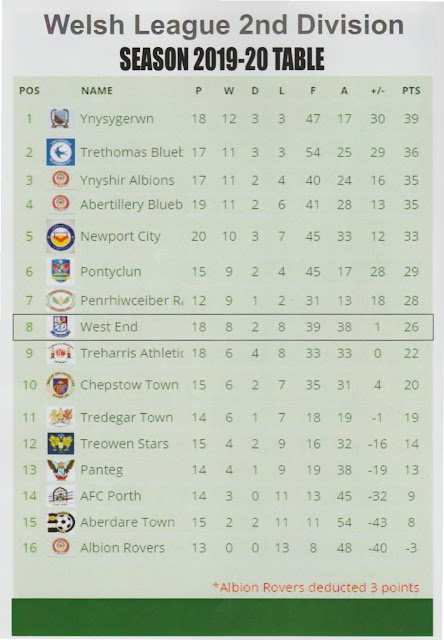 The club have won the Welsh FA Trophy twice as well as a host of local cups. The most famous player to play for the club is Cardiff City full-back/midfielder and Welsh international Jazz Richards who played for the club's youth teams before joining the Cardiff City Academy. The club is based in Mayhill, a district to the north of Swansea. This is high up in the valleys and offers great views of Swansea city centre and the bay. 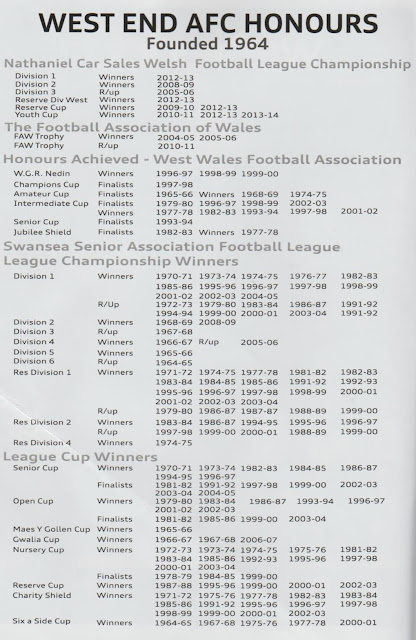 Back in late January, I won tickets on the SkyBet EFL Rewards app, in fact, I won three sets (using two) during that time. Using them up was easier said than done, that was if I wanted to do them with reasonably-priced public transport. There were around ten clubs I fancied revisiting but these either involved an expensive train and were not doable by coach in a day. The other option was to try to rope in a fellow hopper to help with petrol, but the options I offered didn't interest Chris, with my favourite being Oldham Athletic which I hadn't been to in years. Anwar was a little keener, provided it was a new ground and so after a trip to nearby Stevenage on my own, I was able to persuade Anwar to come with me to Swansea, a ground I'd not been to since 2007, the tickets booked 5 weeks in advance. In the week leading up to the game, I checked my blog and realised that I'd written a pretty substantial amount about the game, having had a previous blog (now deleted) during the 2007/08 season. This made me not look forward so much to the game as I'd have been happy with a quick spruce up. Had I had to pay for tickets or been going on my own, I'd almost certainly have sacked it off in favour of something else, but having given Anwar my word, I wasn't going to go back on it. I tried to make the best of it by planning a parking spot in between the city and ground so we could make a bit of a day of it. With there being a couple of Wetherspoons in town, at least I'd get a good value lunch. But in the end, I had a complete change of plan the evening before, Anwar managing to find someone to go with him and me going to West End v Chepstow Town instead.  The only pain was that it was a 2.30 kick-off, meaning that any delay could muck up my pre-match plans. 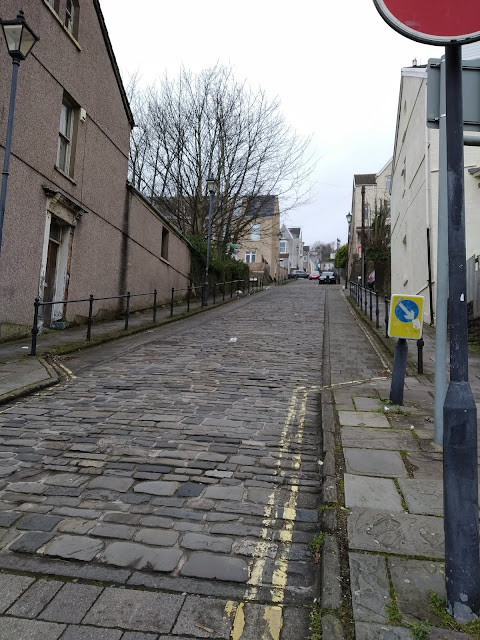 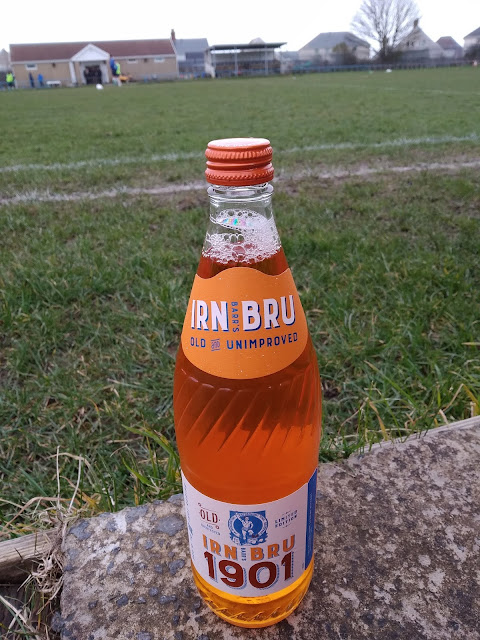 The day of the game came and I woke naturally before my alarm, despite only getting 5 hours sleep. I woked up at 7.15, ahead of my 7.30 alarm by as usual faffed around and had to rush breakfast. I still got to Anwar at 8.30 though and we picked up fellow passenger Scouse Carl along the way. It was a good and easy journey down the M4 aside from a spot between Port Talbot and Swansea where they'd lowered the speed limit to 50 and had plenty of speed cameras enforcing it, also along the slow roads into Swansea. I drove to Morrisons near the ground, arriving at 11.45. I went over to the ground with Anwar and Carl and picked up my tickets before leaving them and getting on my way. I'd used Google Street View to find a suitable halfway spot between the ground and Swansea itself and so was in Nicander Parade around 12.20. The views here were stunning and so I got a few pics before walking down the steep and precarious footpath into the city. There was initial disappointment - the No Sign Bar was listed as having 5 real ciders and indeed it did, only I'd had all of them many times before. The Wetherspoons next door, the Bank Statement was rammed with Welsh rugby fans pre-drinking for their game with England later and so I couldn't get a table for food. It was ten minutes walk to the other Wetherspoons, the Potters Wheel. There was more disappointment when they'd sold out of the Welsh faggots, chips and peas I'd been looking forward to all week. Had I had more time, I might have gone in search of somewhere else but with time tight I settled for sausage, chips and beans with a pint of Dogdancer, both at the usual pocket-friendly Wetherspoons prices. Both were pretty decent and filling and so after using the toilet, I had a small bottle of a cider called Old Crow, a cider I'd not had before. I drank some of it on the way to the ground to save time. I'd come down steep hills along the way and so obviously had to go up them. Constitution Hill was especially steep and long and took a bit of effort to get up it. We have hills at home in Wycombe, making driving treacherous in snow, but this was something else, a 20% gradient making it one of the steepest in the UK. I popped into the Premier Stores near the ground and picked up a bottle of Irn-Bru 1902, a drink I've been looking at getting for ages. I was surprised to find it in Swansea of all places, having expected to have to go up near Scotland or the country itself to get it. I got to the ground at 2.10 and was given a nice friendly welcome. Entry was only £4 and included a programme, a basic issue with quite a lot of adverts in. I'd not seen many pictures of the ground but was pleasantly surprised. It was basic but had plenty of character. I walked around drinking my Irn-Bru and got plenty of pictures. The game kicked off on time at 2.30, so taking a break from catching up with social media for the day was a good thing with little time to spare. 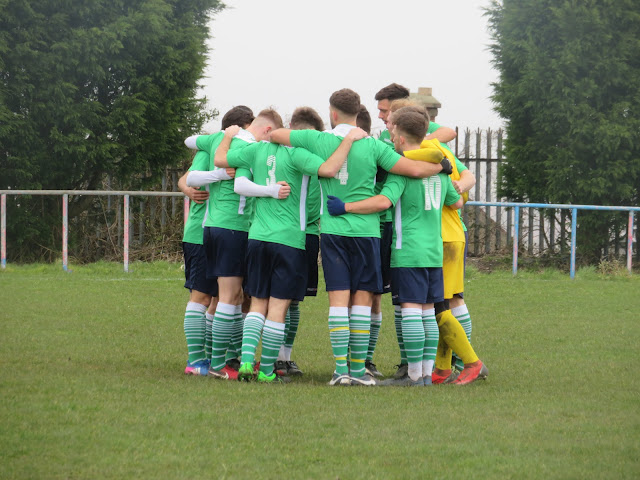 West End were in a mid-table placing of 8th and as expected, their form was mixed. Since the turn of the year, they'd won three (2-1 against Abertillery Bluebirds, 2-1 at Albion Rovers and 1-0 against Tredegar Town) drawn one (the only game in the league to go ahead last Saturday as they drew 3-3 at Trethomas Bluebirds) and lost three (0-2 against Ynyrshire Albions, 1-3 against AFC Porth and 2-5 against Ynysygerwen). Chepstow Town were a couple of places lower in 10th and in the same period, they'd won two (2-1 against Abertillery Bluebirds and 1-0 against Tredegar Town) and lost three (0-2 against Ynyshir Albions, 2-3 at Albion Rovers and 1-3 against AFC Porth). The opening exchanges were fairly level but on 7 minutes, the hosts took the lead. There was no team information available but on 7 minutes #9 put in a low cross from the right which was finished from around six yards by #7. Chepstow started to come into it more and on 11 minutes Palmer drilled just wide of the left-hand post. On 35 minutes the West End goalkeeper made a great double save from Callum Dark and Ryan Scrivens. At this level, the linesman are supplied by the clubs and the Chepstow Town man wasn't happy, telling the referee that he was unhappy with the off the floor tackles and claiming that there should have been three red cards. To be fair to the ref, the ball was won on most of the occasions. The visitors continued to press and on 40 minutes Rhys Thomas had a shot that clipped the left-hand post before going out for a goal kick. A minute before half time, the scores were level. A penalty was awarded for a trip and Matty Board successfully converted the spot-kick. Chepstow were by far the better side now and Dan Williams forced a fumbled save out of the home keeper, the ball squirming out of his grasp and hitting the post. On 67 minutes, the visitors took the lead. I missed the goal as I was returning from the toilet but an assist from Callum Dark set up Ryan Scrivens. West End were dangerous on the break and their #11 forced a great save out of the Chepstow keeper. On 84 minutes, Chepstow sealed their win, Daniel Drake's shot was parried and Ben Thompson followed up to make it 3-1. 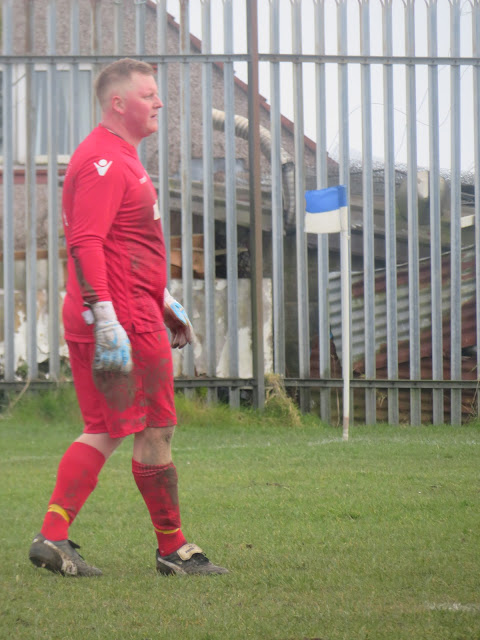 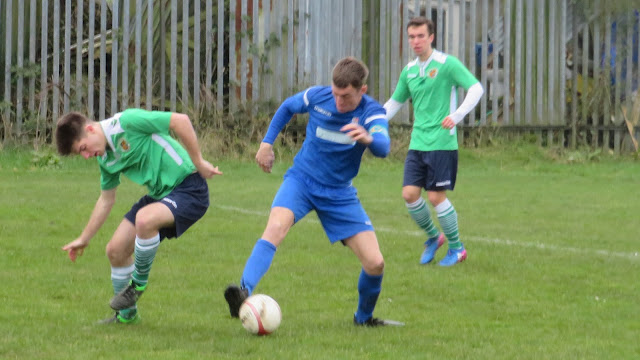 It had been a good day out and it was just a shame that just 15 turned up to watch it. Maybe due to competition from the Swansea game and the Wales rugby, but they certainly deserve more. I left at 4.25 and headed back to Morrisons. The stewards were in the process of closing all the local roads as I arrived but finding a parking spot was easy. I had a look around Morrisons and some of the other shops whilst I waited for Anwar and Carl. I was happy to pick up three bottles of Black Dragon cider for a fiver as well as some crisps and a meat pie. I met the lads at 5.10 and we were soon on our way, making a fairly quick getaway given the volume of traffic. Radio 5 was covering the rugby and  TalkSport the football, so we turned to LoveSport for the phone in. Well, I say phone in, but 90% of the time was spent with the presenters waffling amongst themselves. I was glad when 7 o clock came so we could listen to 6-0-6 where they actually gave the fans a platform. The journey home felt longer and was prolonged by me having to stop at Didcot for petrol. I wasn't best pleased to have to pay 6p a litre or £2.50 more a tank than back home but I had little choice with Sainsbury's being the cheapest option in the area. It also involved going on some rubbish roads rather than the main drag, but we were back in Aylesbury by 8.40. I got home myself at 9.10 and had time to sort photos and type a blog for my game yesterday before Match Of The Day came on. I had a couple of cans with this to try and help me get to sleep, but to no avail. I was up until 12.30, meaning I got little over three hours sleep before work and of course needed my usual nap the following afternoon. I certainly want to visit more grounds in Wales, it's a great country and near the top of my list is Chepstow, home of a great cider maker called Troggi which is rare and had to find due to being a small-scale producer. 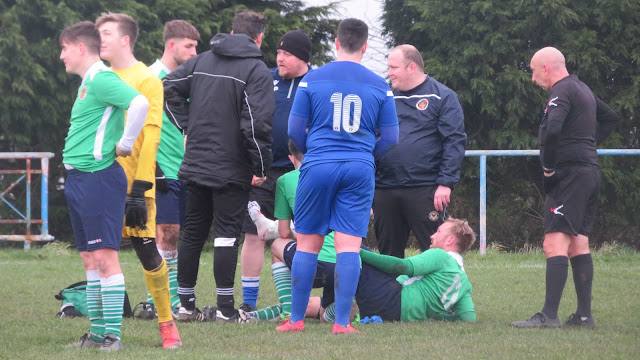 PRYDERI PARK is a basic setup but has plenty of character. There's no floodlights and just the one stand which holds around 30. The rest of the ground is open. There's a club room which sells hot and cold drinks and snacks and apparently a sports and social club although I didn't visit the latter. The ground is around 30 minutes walk from Swansea centre, though there are takeaways and shops less than ten minutes from the ground. I really enjoyed my visit there and would certainly recommend a visit. 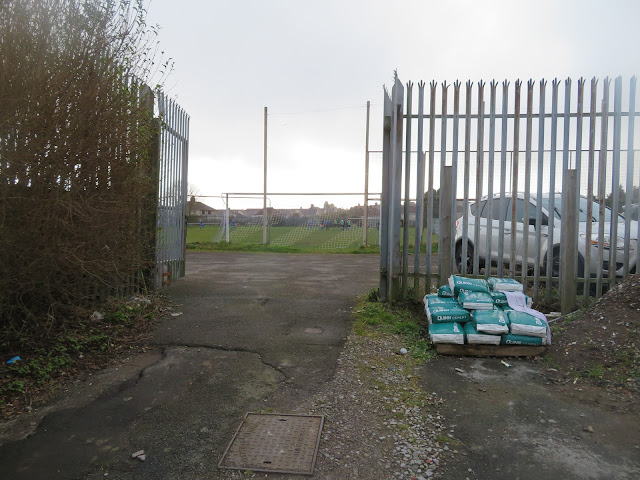 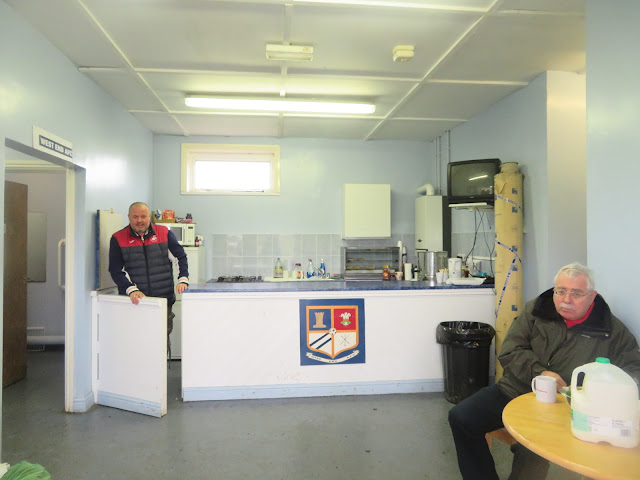 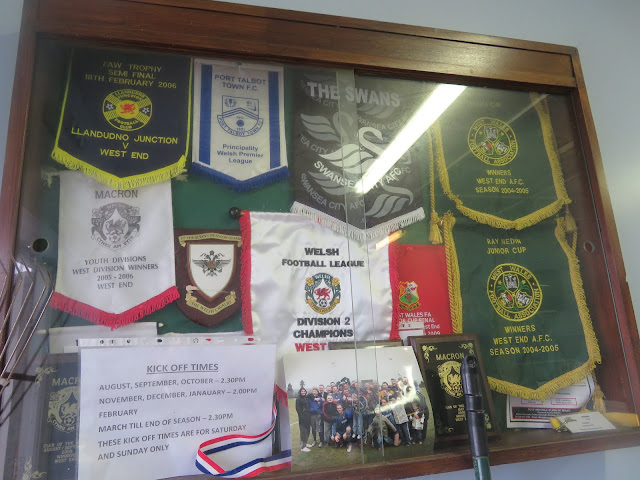 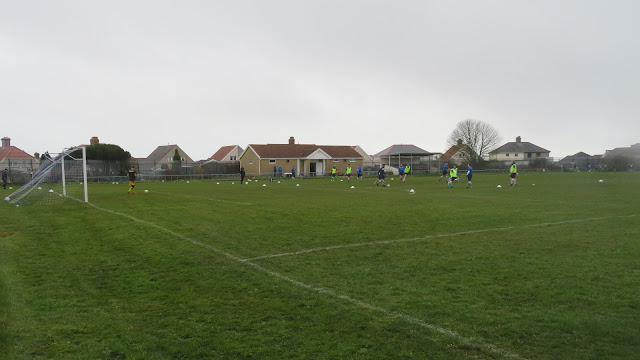 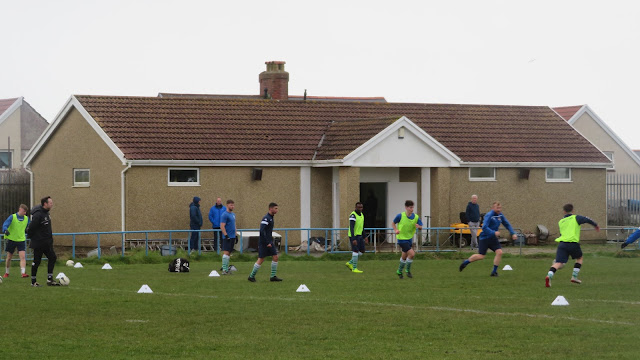 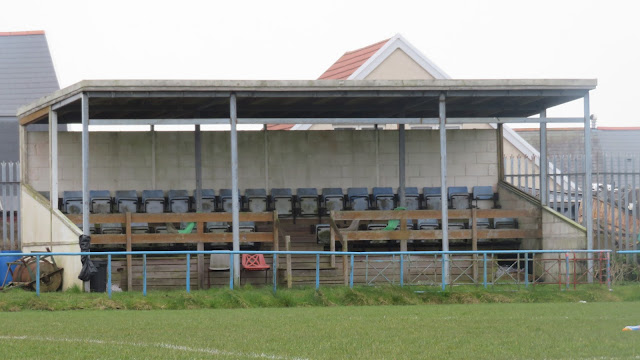 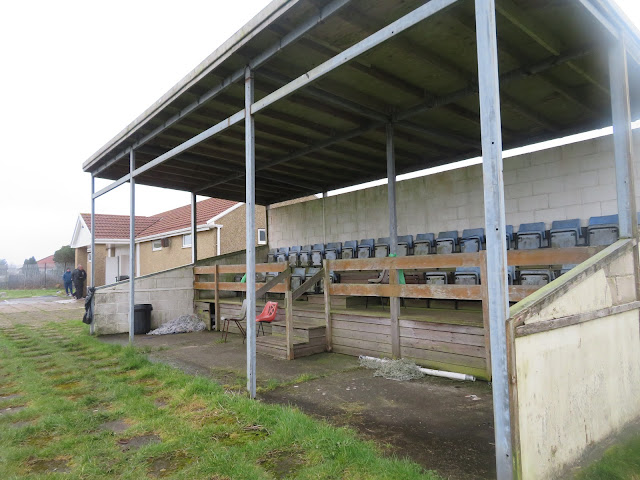 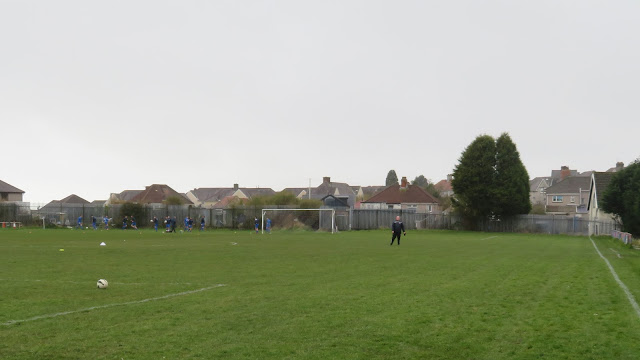 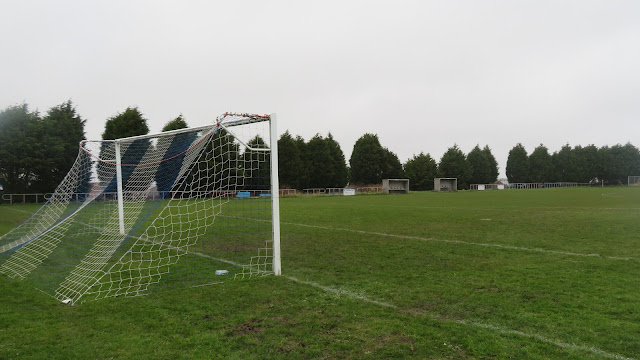 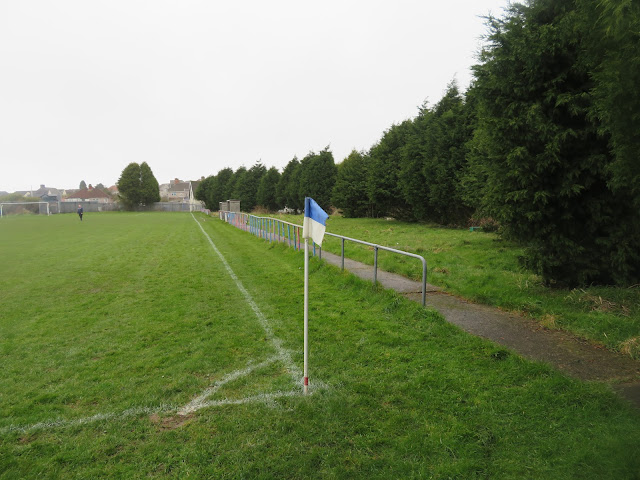 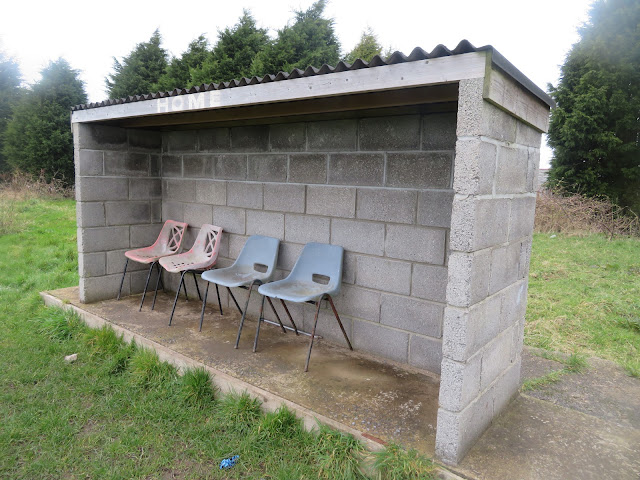 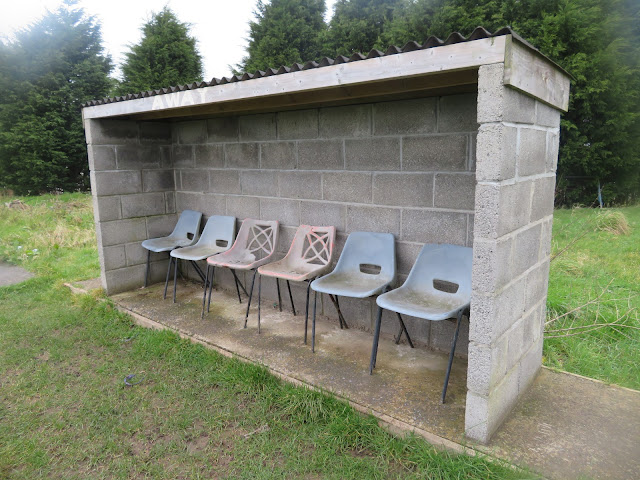 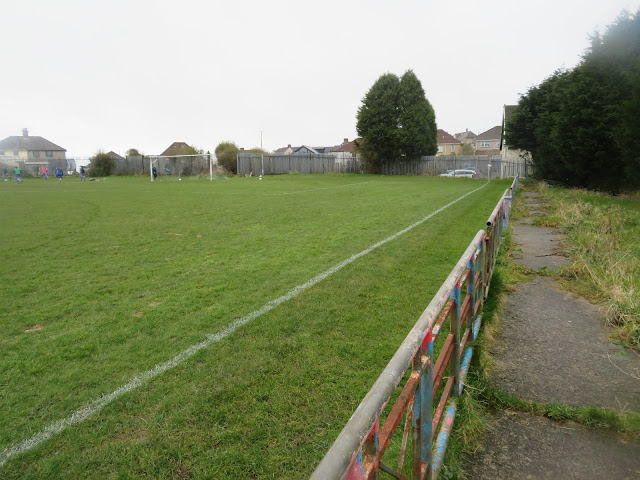 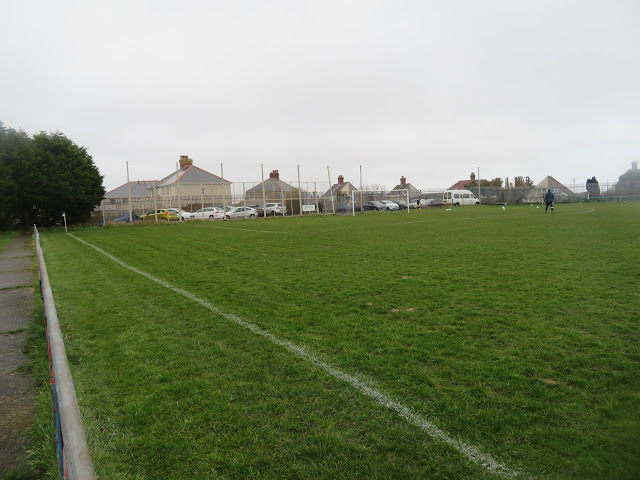