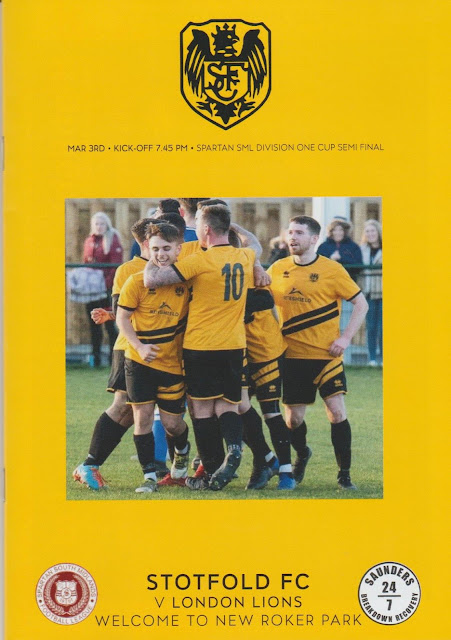 Though there is a history of a Stotfold FC in the early 1900s, this version of the club was established in 1946, following the end of the Second World War. They joined the South Midlands League (forerunner to the current Spartan South Midlands League) at Division 1 level in 1952, winning promotion to the Premier Division within a couple of seasons. The club managed a runners-up spot on five occasions before finally winning the title in 1981. The club was transferred to the United Counties Premier in 1984, finishing as runners-up in 1996 and winning the title in 2008. Two years later they were transferred back to the Spartan South Midlands League and have been disappointing ever since, the best they could muster was a 9th place finish in 2012. After receiving a reprieve after a rock-bottom finish in 2018, the club was relegated for the first time in their history last season. With four promotion places up for grabs this season, Stotfold sit in 5th position with games in hand on the teams around them. In the FA Cup, Stotfold's best run came in 2007. That year they beat Leverstock Green, Potton United and Stansted in fairly routine victories to set up a tie with Chesham United who were at the time, a division higher. They gained a 1-1 draw in the original game before bringing them back to Stotfold and beating them 2-1.  Their run ended abruptly in the 3rd Qualifying Round with a 5-0 home defeat to the then Isthmian Premier side Tonbridge Angels. The club has reached the 4th Round of the FA Vase on a number of occasions, most recently in 2010 as they lost 2-0 at home to Shildon. Local honours include the Beds Senior Cup (four times), the United Counties League Cup (three times) and the North Beds Charity Cup (twelve times). Former players to play for the club include Mitchell Cole, Phil Gray, Liam George and Graeme Tomlinson. The latter came from the Manchester United academy and though he had a competitively mediocre career is noted for being a stellar signing on classic computer game Championship Manager 97/98. Stotfold is a village in Bedfordshire with a population of around 6,200 and is where Olympic champion Victoria Pendleton grew up as a child. 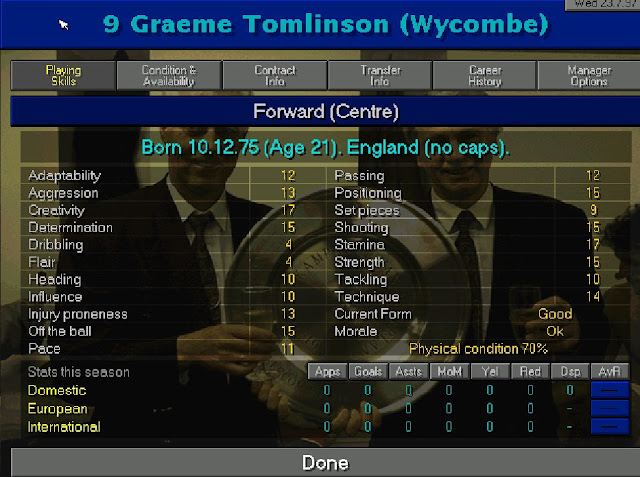 Back on Sunday, I contacted fellow hopper Anwar to see if he fancied a game this Tuesday. He said he did, and to go for whatever was the nearest. Happily, Stotfold had moved into a new ground and were at home and with them having a decent pitch and little rain forecast, there was a good chance that it would be on, unlike recent weeks where there had been a huge deluge of rain. The day before the game had been a busy one at work with a ten and a half hour shift of hard graft so I was glad of my usual day off. I used it like any other Tuesday, walking to town and back (nearly 10 miles according to my fitness tracker) as I needed to pick up a few bits of shopping. It was a pleasant enough morning and I used the time to catch up on my podcasts and get some much-needed exercise. The day was made even better when I spotted a stray tenner on the verge, making up for some of the money I've probably lost in the same manner down the years. There were a few spots of drizzle in the air on my walk but I was pleased to miss the brief downpour that occurred around twenty minutes after I got home. Local Non-League enthusiast and radio presenter Ollie Bayliss informed me that the chips were really good at Stotfold so I opted for a late lunch / early dinner of risotto just before 4. I left at 5.10, meeting Anwar at 5.45. We were soon on our way, the only major traffic getting out of Aylesbury. It was a right cross country route, but with lots of traffic on the main drag, it wasn't all bad. We were at the ground by 7.15 where I paid £6 to get in and £1 for a programme. The tannoy was playing some great tunes pre-match whilst I walked around getting pictures. I got myself some chips before kick-off which were decent and I was also considering a half time toastie and indeed I did succumb. 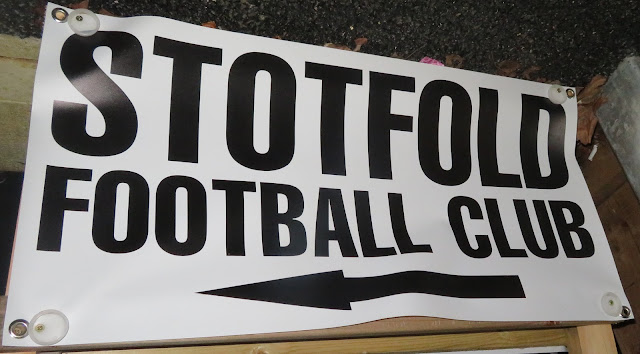 The two sides had drawn 0-0 in the league game, played three weeks ago. Stotfold were in 5th place and since then they'd had home wins over Milton Keynes Robins (3-0) and Buckingham Athletic (4-1). In fact, they'd won 14 of their last 16 games in all competitions, the only blemish being a 5-0 defeat at Biggleswade United in the North Beds Charity Cup. London Lions were in 8th and their form was a little less spectacular having won two, drawn three and lost one of their last six in all competitions. Thanks to caution over the Coronavirus outbreak, there were no pre-match handshakes. The game started really brightly. London Lions heading just over in the opening minute. It was mainly Stotfold asking all the questions though and they'd already forced a couple of good saves from the visiting keeper and curled a shot narrowly wide of the right-hand post before they opened the scoring on 10 minutes. A corner was put in from the right was headed in at the near post by Luke Gregson. Kim Forsythe had a shot cleared off the line on 18 minutes as Stotfold continued to dominate, the London Lions making a good save with his feet on 26 minutes to keep the score 1-0 at the break. The hosts extended their lead a minute into the second period, a shot from Kim Forsythe from just inside the area made it 2-0. On 48 minutes it was 3-0 when Josh Coley capped a good run with a smart finish. Seven minutes from time, it was a good run from Forsythe and a finish from 6 yards by Coley to make it 4-0. On 85 minutes Stotfold made it five, there were claims of offside but the ball came off a visiting defender before Forsythe got away to slot past the keeper and grab his second goal of the evening. It had been a good game and competitive for a while, but in the end, Stotfold were clear and deserved winners which delighted most of the 108 in attendance. We left around 9.40, listening to Radio 5 on the way home with me dropping Anwar off at 10.40 and getting home myself at 11. I stayed up for a while but took ages to get to sleep which wasn't ideal with me up at 4 am for another 11 hour shift the following day. 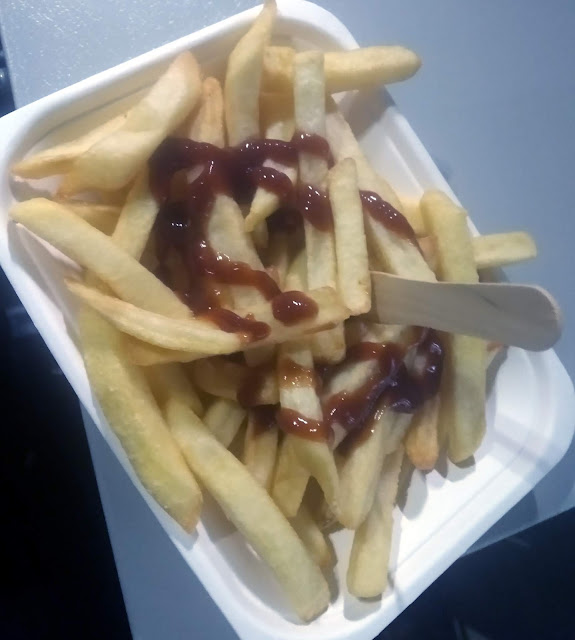 NEW ROKER PARK or the JSJ Stadium for sponsorship purposes is one of the better new builds. As ever, it's built using metal stands but they are amongst the better ones with one seated along one side and one standing along the other, both 150 in capacity. The rest of the ground is open. The bar is pretty good, spacious and with sports TV. The food is excellent, freshly cooked and great prices and very tasty too. The village is not too far away and there's an Esso petrol station nearby and also plenty of parking. 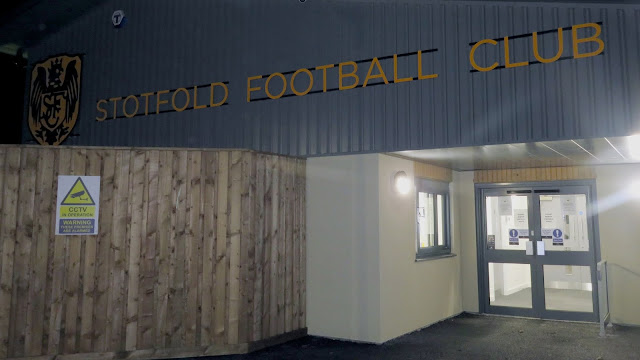 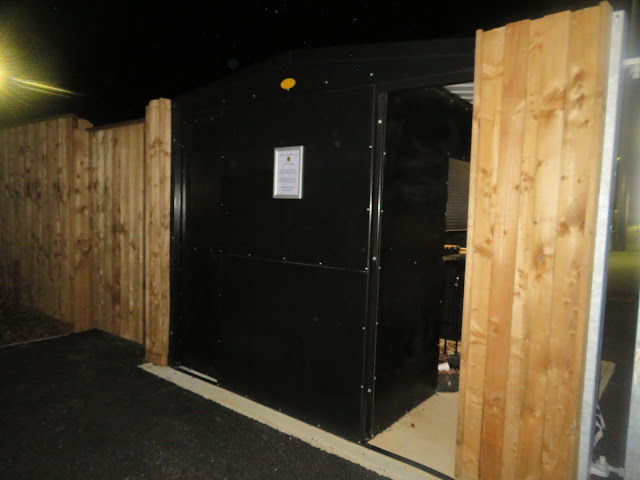 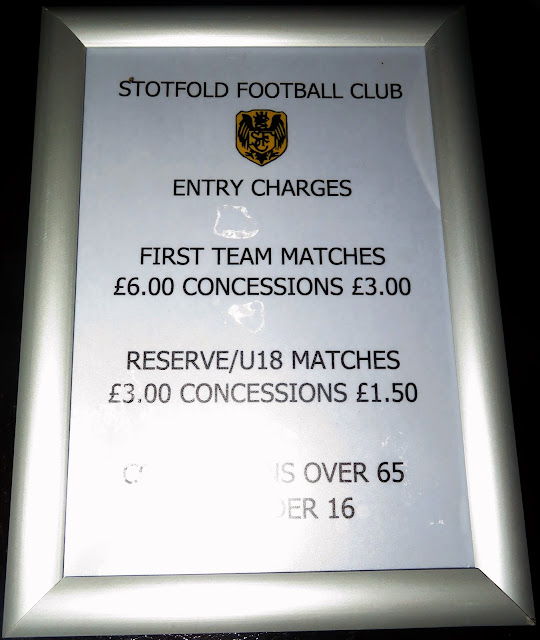 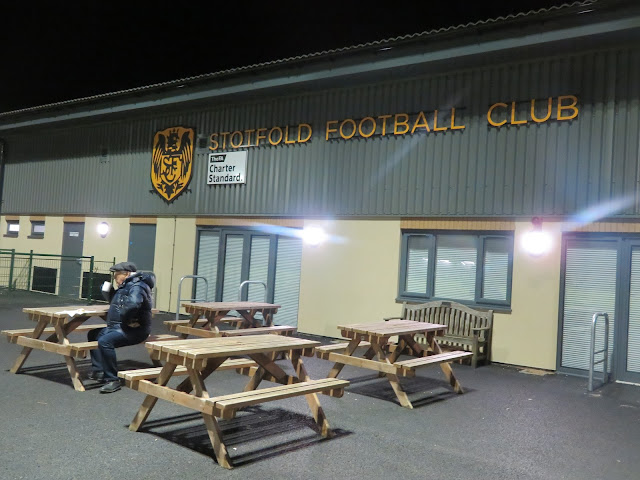 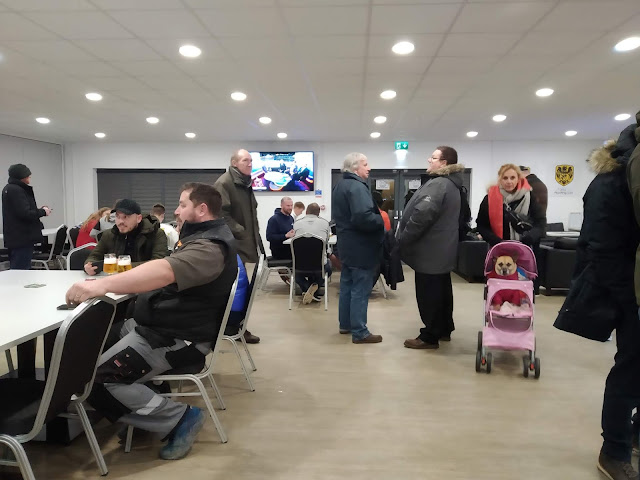 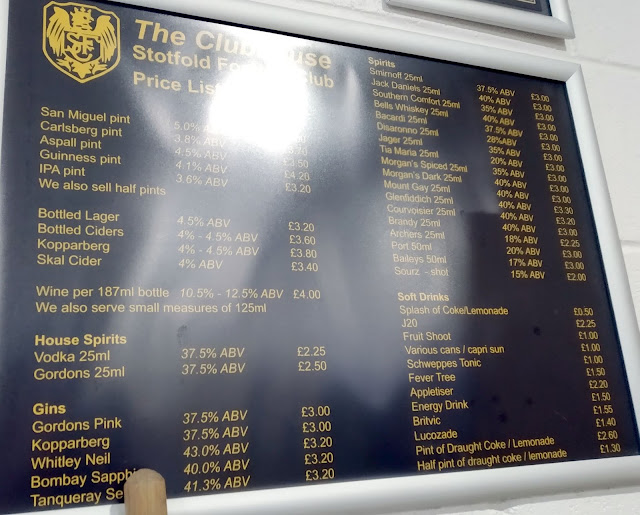 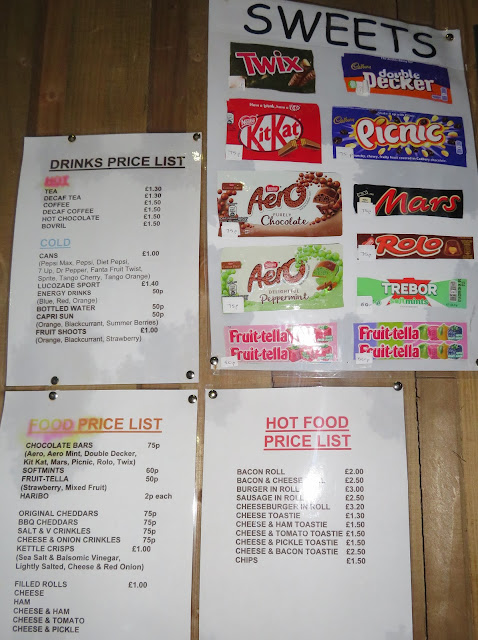 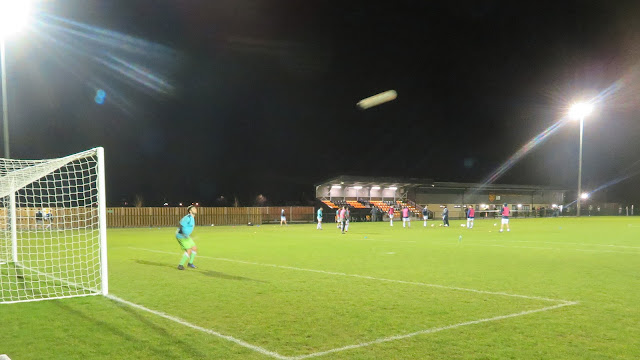 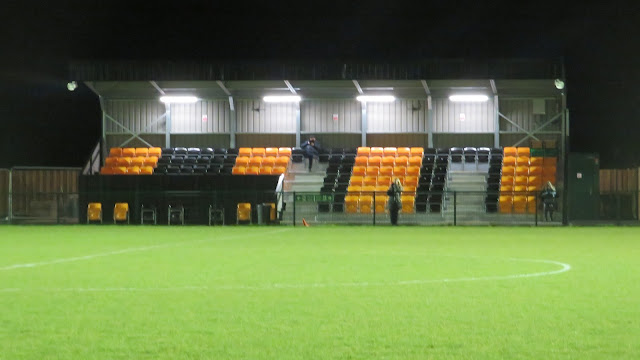 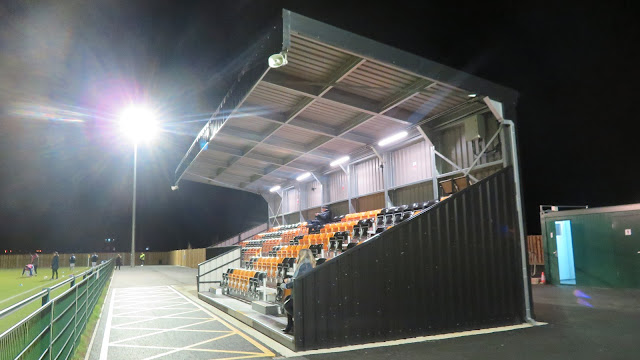 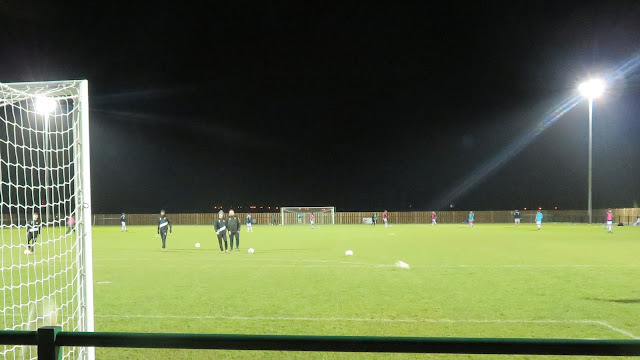 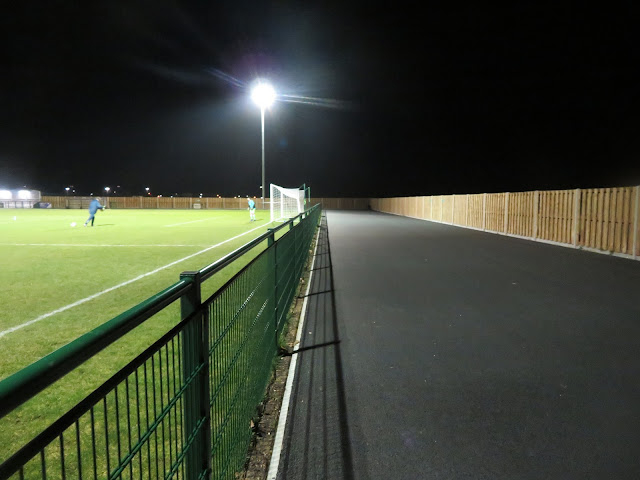 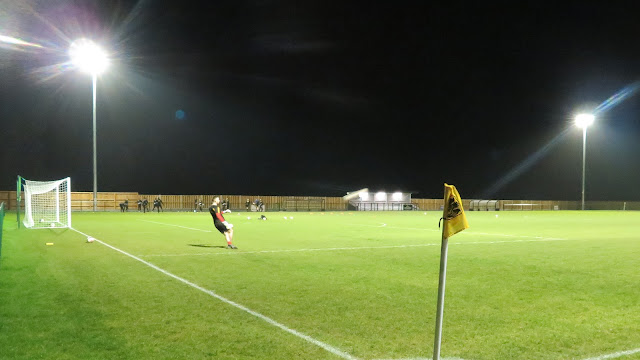 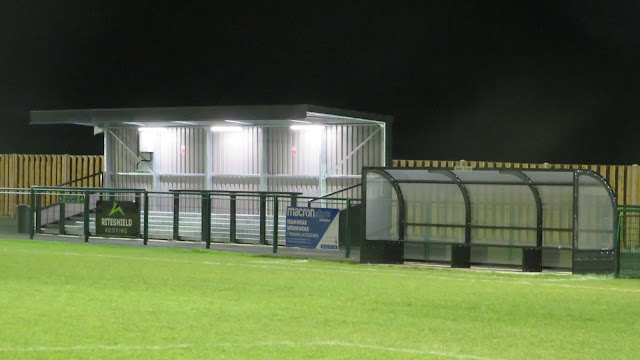 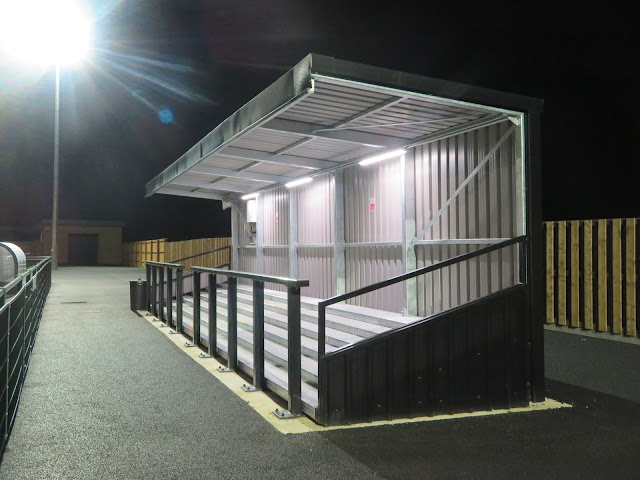 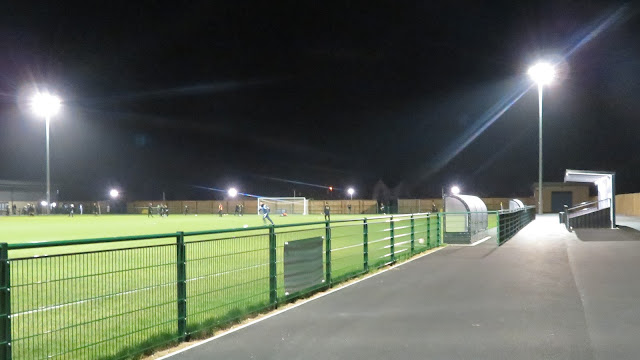