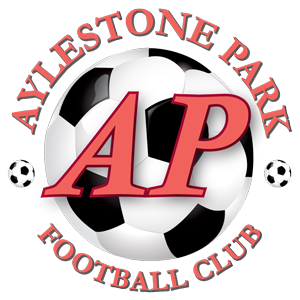 The club was established as a youth team in 1968 and was an original founder of the Leicestershire Youth League. As they made the change to Sunday men's football, they changed their name from Aylestone Park Youth to Aylestone Park Old Boys whilst playing in the Charnwood Sunday League. In 1980 they joined the Leicester & District League, starting in Division 2 which was won at the first attempt. The following season they were runners-up in Divison 1, winning a second consecutive promotion to the Premier Division. They finished as runners-up twice before joining the Leicestershire Senior League. They initially found going tough in Divison 1 but in 1995, a runners-up spot was good enough for promotion to the Premier Division. Again, they struggled with the step up initially and during their time here, they dropped the 'Old Boys' suffix from their name in 2007. In 2012, Aylestone Park finished in 3rd place behind Rothley Imperial and Lutterworth Athletic, earning promotion to the East Midlands Counties League in the process.  Their 4th place finish in 2017 was the best in the club's history and the following year they transferred over to the United Counties D1 where they are currently doing well, sitting in 3rd at the time of tonight's game. 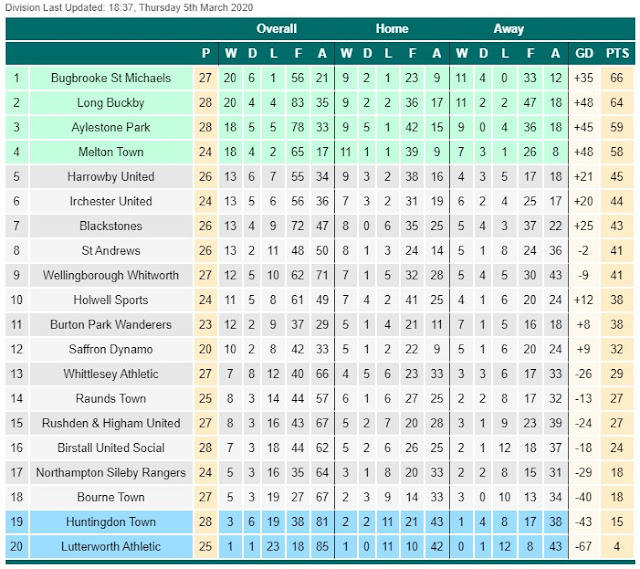 Aylestone Park have only played two seasons in the FA Cup. Their best campaign was the latter one when in 2017 they won 1-0 at Heanor before going out 4-1 at Hinckley in the Preliminary Round. Their best win (and only victories) in the FA Vase came in 2018 as they beat Clipstone & Kimberley Miners Welfare before losing to Blidworth Welfare in the 1st Round. Local cup wins include the Leicestershire & Rutland Senior Cup in 2013 and the EMCL Cup in 2016. Famous former players include Gary Lineker who played for them as a youth and became the club president. The club is based in the Aylestone district of Leicester which has a population of just over 11,000 sharing the area with nearby St Andrews FC.

I was originally planning to visit Aylestone Park on 21st February, however, fellow hopper Chris couldn't make it and in any case, it was switched to the 3G pitch which I had already seen Saffron Dynamo play on a couple of years back. I saw they were at home again on this Friday and happily Chris was able to make it this time. The weather was looking kinder this time too and their helpful Twitter informed me that the plan was to play on their main pitch. I'd been having some busy days at work lately, working eleven-hour shifts to help out with the extra orders as customers started panic buying due to the Coronavirus outbreak. It left me with very little free time, but at least on Thursday, I managed to get some things done and have time to watch a video of Gary Lineker at the club's 50th anniversary whilst I researched their history for my blog. The day of the game came and it was another heavy day with people buying. However, it wasn't a long one and I was out by 1.30, even if the whole thing wasn't finished, I needed to get home and had around 90 minutes to get changed, have lunch and have a bit of a rest before leaving at 3.15. There was a lot of traffic on the way, mainly on the A413 where they were doing roadworks so I didn't get to Chris until 4.35. We had a surprisingly good journey up, only suffering major delay once we got into Leicester. We got to the Aylestone Spice just before 6 where I had a Spice Special curry, Keema rice, samosas, poppadoms and a J20. It took a fair while to come, but we had plenty of time to kill. The portions were huge and the food was good. From there it was 10 minutes to the ground, with us getting there at 7.30 and paying £6 to get in. Chris and I stood with hopper John Main for the game and there were plenty of hoppers in attendance. 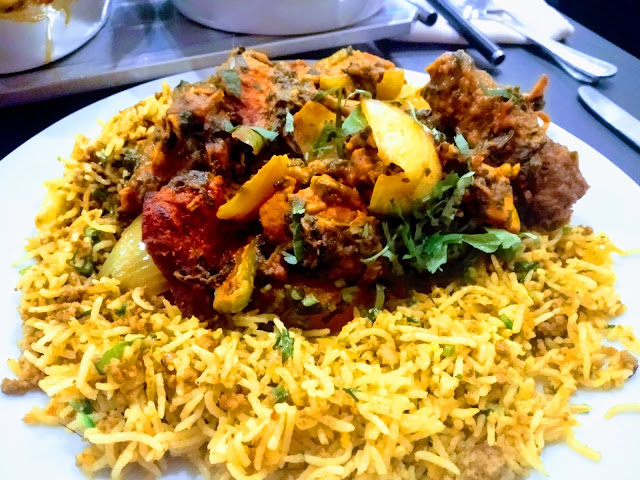 Aylestone Park had not played for a couple of weeks but the came into this game on the back of a five-game winning run, the highlight of that being a 6-0 hammering of Lutterworth Athletic in their last outing and a 5-0 win over Bourne Town in the game before that. Visitors Melton Town were a place below in 4th and they were on an impressive run too, unbeaten in 15 (winning 11 and drawing 4). They'd beaten Aylestone Park 1-0 in the reverse fixture on 28th January thanks to an 85th-minute goal from Sam Beaver. The visitors were well on top in the opening exchanges and Aylestone could hardly get it out of their half. Melton took an early lead on 7 minutes when Chris Hibbert headed home from a corner, the ball clipping the woodwork on the way in. Melton continued well on top but their number 3 was booked for arguing with the referee one too many times. This changed the direction of the game, finally, the hosts got into it, hitting the post, having a goal ruled out for offside and firing narrowly wide of the post before half time. Melton were restored to 11 men and they made it 2-0 with a fantastic strike from 30 yards by Nathan Arnold on 55 minutes. Melton hit the post but Aylestone pulled a goal back with a well-worked goal which saw Rikki Bates finish at the far post on 60 minutes. Fifteen minutes from time, Aylestone Park were awarded a penalty after a foul just inside the area and Aaron Preston converted the resulting penalty to make it 2-2. Melton continued to press and the hosts had Aiden Kirby to thank for clearing the ball off the line to keep them level. In turn, the Melton keeper pulled off a great save to tip the ball over the bar.

It turned out to be a great game in great company in the end. There'd been much planning during the evening on my part. I initially thought that I'd managed to persuade Chris to do Steeton with me next Wednesday, however, in the end, he had to pull out because of finances. Changes were made to tomorrow's plans though. I'd originally planned on going to Swansea v West Brom, having won tickets on the SkyBet app. However, I wasn't really looking forward to it, having been twice, as recently as 2007 in fact. I'd achieved my main aim of updating my blog, so started looking for other games. I found one in West End v Chepstow and after negotiation, managed to offload my tickets to Anwar and his mate Scouse Carl. We left around 9.50 and after a stop at services so Chris could get a drink and Tesco so I could get petrol, I dropped him off at 11.10. I'd decided to take the longer route down the M1 and around the M25 as opposed to the cross-country route as it avoided the winding roads and kamikaze wildlife that made the drive unpleasant.  However, the route was blighted by speed restrictions of 40 & 50 as well as a diversion. I was home safe though, which was the main thing, albeit slightly later than intended. I stayed up for a bit, finalising details for tomorrow and working on tonight's blog. I had a couple of cans of cider whilst doing do and watching Corrie before going to sleep just after 2. 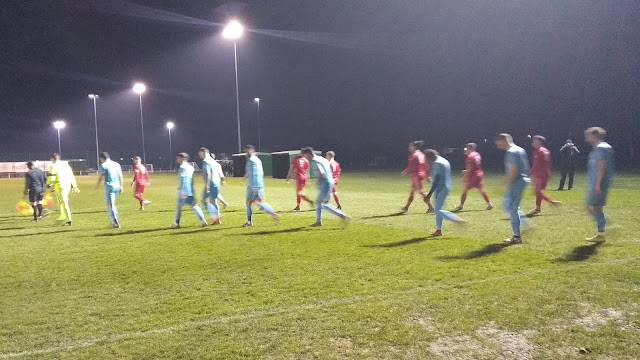 The MARY LINWOOD RECREATION GROUND is a fairly standard step 6 ground. There's the standard metal seated stand, around 80 in capacity. Apart from that, its all open with only three sides due to the cricket. Though I didn't try them, the bar and tea bar looked excellent. If not, then around 20 minutes walk or 10 minutes drive away is an area of shops than contains a good Indian Restaurant and also the chippy and Ale Stone Micropub that I visited when I went to the 3G pitch. 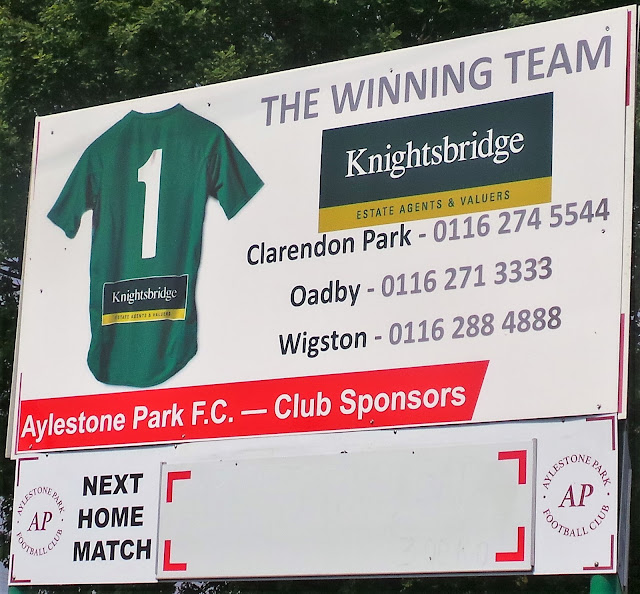 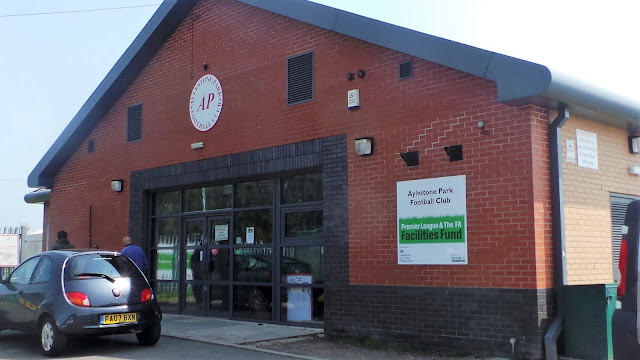 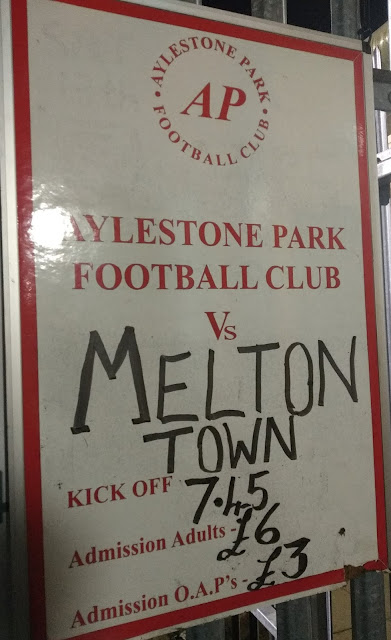 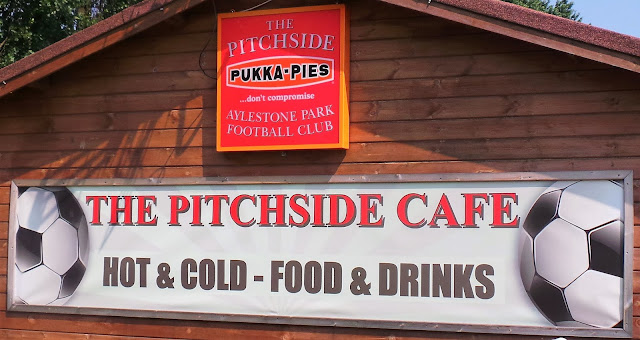 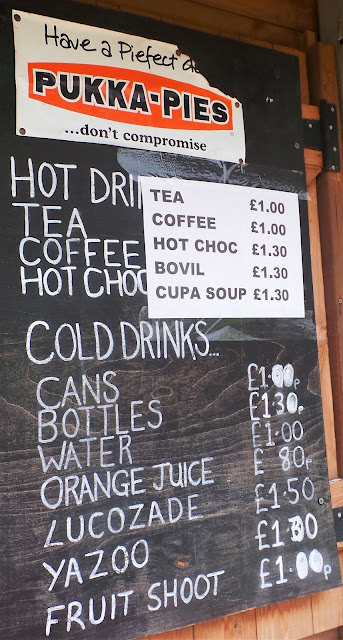 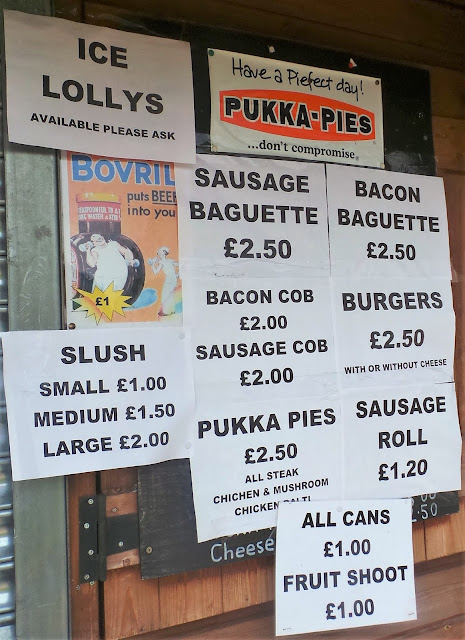 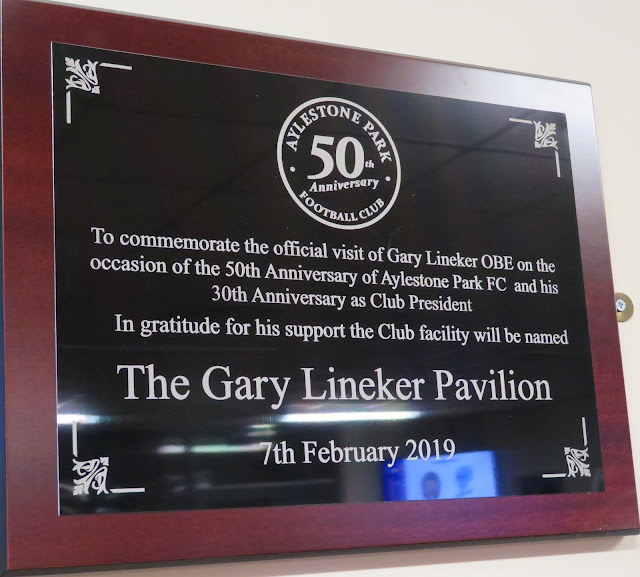 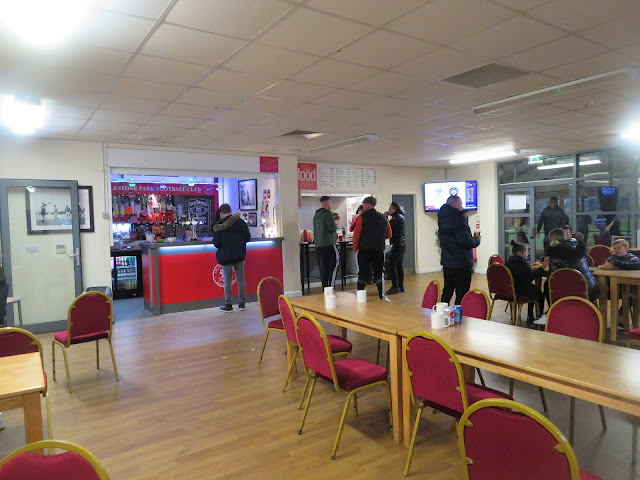 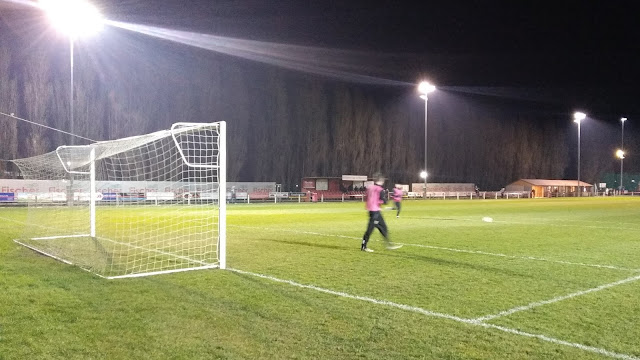 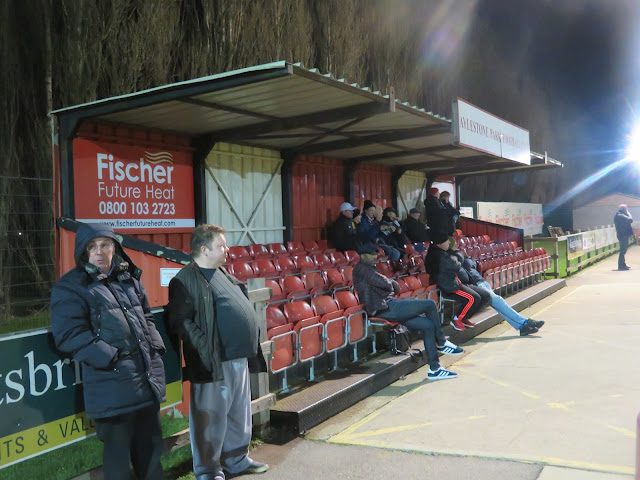 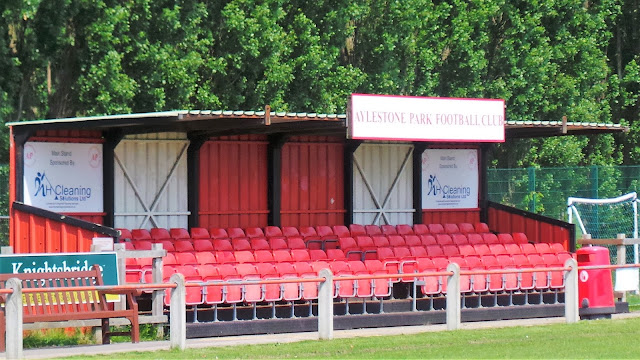 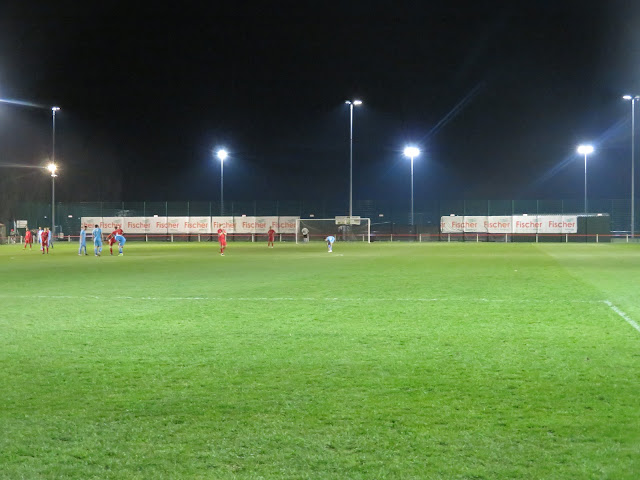 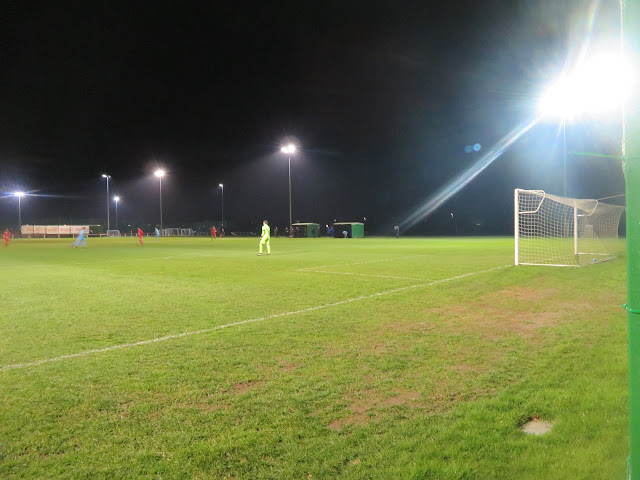 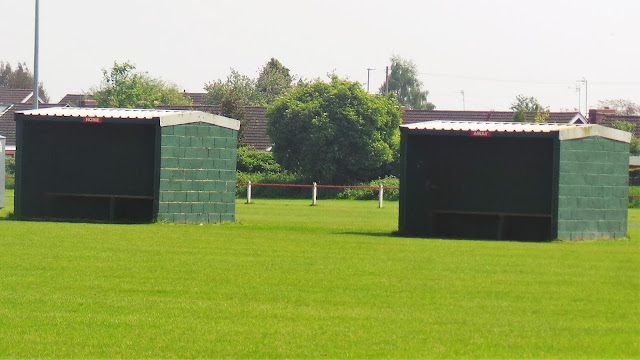 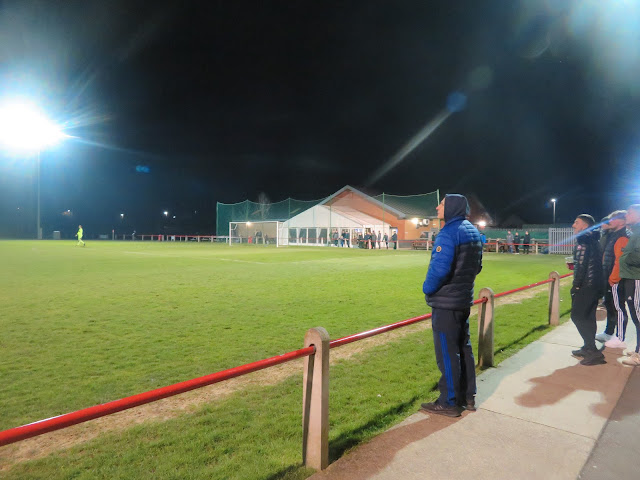 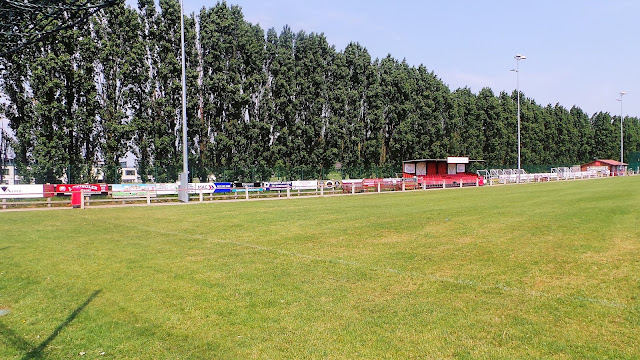