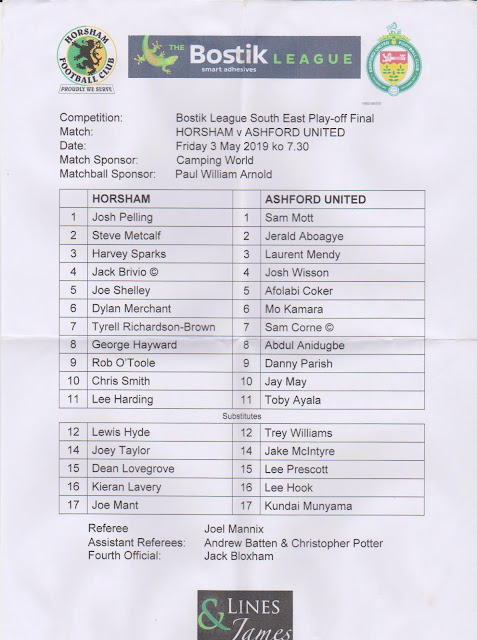 The club was established in 1881, playing on local parks until 1904. That year they moved to Queen Street, which remained their home until 2008 when it was sold to property developers. For a couple of years, they shared at nearby Worthing, returning to Horsham in 2010 to share with Horsham YMCA whose old ground was near to their former ground. That lasted until 2017 when they moved into the Sussex FA Ground with Lancing FA. Plans are afoot to return to Horsham, a new ground is in the process of being built, with just the finishing touches being added. The town of Horsham itself has a population of around 55,000 and famous former residents include Harry Enfield, Alan Mullery, Paul Parker and Holly Willoughby.

The team started out in local leagues and were founder members of the West Sussex League in 1896 and were highly successful there, winning it on four occasions. They made the step up to the Sussex County League in 1926. They were highly successful there, winning the title on seven occasions. They left the league in 1951 and had spells in the Metropolitan & District League (winning the title in their debut season), Corinthian and Athenian Leagues. In 1973 they joined the Isthmian League, initially in its second tier. Despite a 5th place finish in 1979, they were relegated to Division 2 the following season. There then followed a barren spell for the club, reorganisation in 1991 saw them drop a further step to Division 3, but by 1995 they were champions and won promotion back to Division 2. This time, they fared a lot better and by 2002, a runners-up spot behind Lewes was good enough for promotion to the newly formed Division 1 South. Another promotion followed in 2006 and they spent 6 seasons in the Isthmian Premier, recording their best-ever placing of 8th in their debut season of 2006/07. After finishing bottom of the table in 2012, the club suffered a loss of form and in 2015 were relegated back to the Sussex League for the first time in 64 years, albeit with it being renamed the Southern Combination Premier. They won the title at the first attempt, returning to Isthmian D1 South at the first attempt. Following two mid-table seasons, they finished as runners-up to Cray Wanderers. Following victory over Haywards Heath Town in the playoff semis on Monday, they now face Ashford United for a place in the Isthmian Premier after their opponents overcame Hastings United on the same night.

The club's best ever FA Cup run came in 2007 when they beat Arundel, Bury Town, AFC Wimbledon, Chippenham Town and Maidenhead United to reach the 2nd Round. Despite taking the Football League side to a replay, they lost the second game 6-2 at the Liberty Stadium. The FA Vase 4th Round was reached in 1987 as they lost 3-1 at Collier Row in a replay. In the FA Trophy, the 2nd Round was their best progress, reached in 2003 when Horsham lost out to Thame United. Local cup wins include the Sussex Senior Cup (seven times), Sussex Floodlit Cup (twice), Sussex Royal Ulster Rifles Cup (thirteen times) and Brighton Charity Cup (six times). The club's record signing is Lee Farrell, one of the few deaf players to play in semi-professional football, he signed from Lewes in July 2007. The following season, they recouped £10,000 from Tonbridge Angels for Carl Rook. 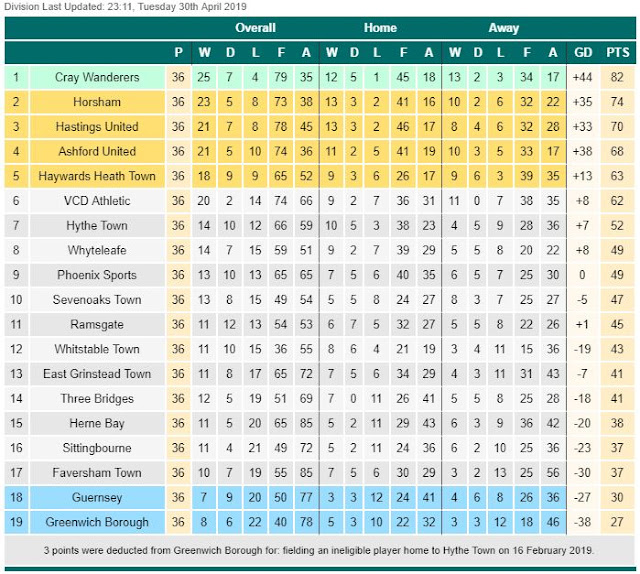 With the end of the footballing season rapidly approaching, I was keen to get in some games whilst I could. This was especially true for my favourite time of the week to watch football, Friday night. There were a few decent choices, but in the end, I chose the best game in the Isthmian D1 South East Playoff Final at Lancing. I tried to get fellow hopper Anwar to come along too, but it was yet another refusal, with him going to Arsenal the previous evening which was fair enough. Even so, I was still keen to go, at under 90 miles each way, the petrol costs would not be horrendous. With the ground being close to the town of Lancing, it would be decent pre-match too. The day itself was a pretty good one, it had been a much more pleasant week at work and well over two weeks had passed since I was flashed by a speed camera and there was still no sign of a ticket. It was also a pretty easy day at work, with me out of the door at 11.15. With a few hours to kill before I needed to leave, I spent the afternoon looking at potential upcoming games. There wasn't a huge amount left and this will represent my quietest season since the 2014/15 season. Not that I'm fussed, I'm glad to have shown at last some restraint. I left at 3.30 and with the M25 on my journey, there was always going to be delays. In the end, things were not so bad and I was parked up in Lancing by 6. A car park a few minutes from the ground with tiny spaces did the job and with time to spare, I headed into town. The Stanley Ale House was my first stop where I had a pint of Big Nose Beardy Great Expectations was excellent, of a tad expensive at a fiver a pint. There were others that I'd not tried, but I stuck at a single pint as I had to drive later. In any case, the other producer, SeaCider had blocked me on Twitter after I'd criticised their products, so I was in no rush to try any of their ciders. From there I walked to a Chinese Takeaway, Lee House where I got Chilli and Peppercorn chips with a seafood pancake roll for £4.80. It was very nice, even if the potions were a bit tight. 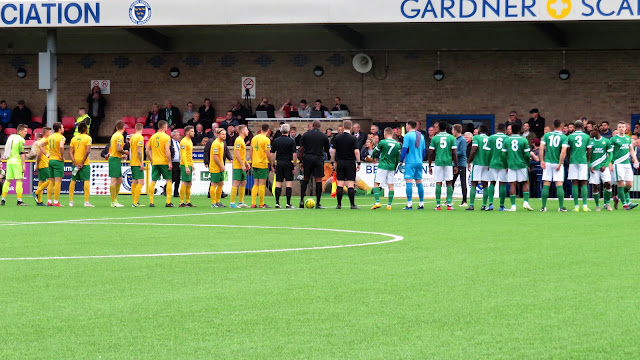 By 6.50, it was time to go in, the entry fee of £9 above average for a normal step 4 league game, but acceptable for a playoff final. There was a good atmosphere building and the bright yellow and green colours of Horsham had lit up the town and the ground. Both sets of fans were in good voice, but it was a pretty dull start to the game. There's been a bit of drizzle on the way down, but for around 20 minutes the heavens opened and I got absolutely drenched. The rain eventually abated. It was a fantastic strike by George Hayward that opened the scoring on 39 minutes as he netted a half volley from the edge of the box. This opened up the game and Ashford were unlucky not to equalise when Horsham keeper Josh Pelling parried a shot and the rebound was hit against the underside of the bar before being cleared. They pulled level right on half time when a penalty was awarded for an apparent stray arm and Sam Corne converted confidently from the spot. At half time, I spent some time in the bar to dry off before going out and getting a Bovril and some chips. There was a huge queue, but credit to the staff, they whittled it down pretty quickly. The visitors were well on top at the start of the second half but it was Horsham that got the chance to go ahead around 20 minutes from time. A penalty was awarded but the Ashford keeper Sam Mott pulled off a cracking save to keep the scores level. This was part of a good spell for the hosts and they were unlucky not to snatch it right at the death when they had a shot cleared off the line. Extra time was required though and it was Ashford that had lots of possession, but without really doing anything with it. Horsham had a chance to go ahead tight at the end of the half but it wasn't to be. It was a half that seemed to drag on for ages and it was 9.55 before the second period of extra time started. Horsham took the lead on 110 minutes when a free kick was looped in and Rob O'Toole headed home what turned out to be the winner.


Ashford fought valiantly, but they couldn't equalise and so the penalty shoot-out that I'd been hoping for never materialised. It had been a decent contest for the 880 in attendance including a few people I recognised off of Twitter. It was 10.15 by the left and needing a drink, I headed to ASDA, one of the few places that were open and got a bottle of Ribena. I got back to my car and had a good journey home. Usually, travelling after 10PM is a bit of a lottery with road closures but my journey was OK aside from a few lane closures. The 1990s Football podcast and random music kept me company on the way back with me getting home at Midnight. I watched Corrie and YouTube as I typed this blog and sorted photos. It was 2 am before I got to bed, but with a late kick off for Wycombe the next day, I had no need to be up early. It had been a fairly costly night for me - £35 all in on my football expenses and that was with me not counting my Chinese and cider but it had been a good night out and well worth the visit. 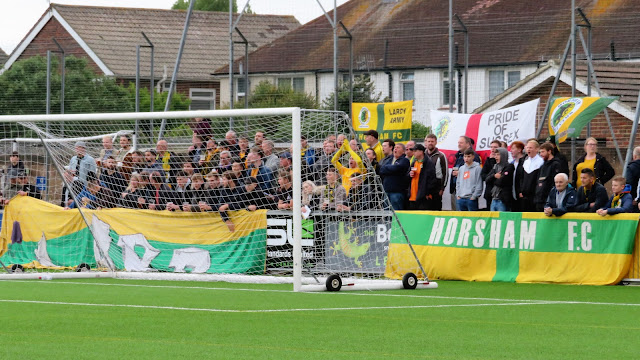 
CULVER ROAD is a smart and tidy venue. The only covered area is a seated stand holding a few hundred, plus more standing. The rest of the ground is open. Tea bar facilities are decent at the ground, a good range at fair prices. I didn't look at the bar in detail, but it was quite big and also had a small range of club merchandise available. The town of Lancing is on the doorstep, with plenty of places to eat and drink. The pick of these is a smashing Micropub called The Stanley Ale House which has a great range of ales, ciders and other drinks. 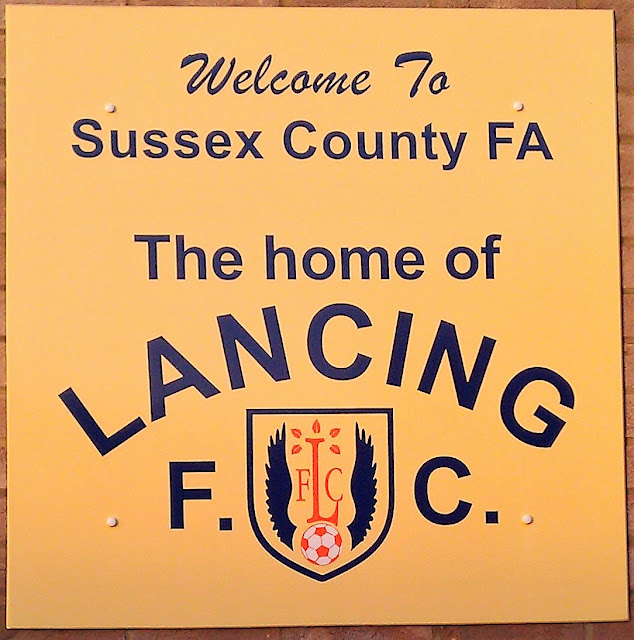 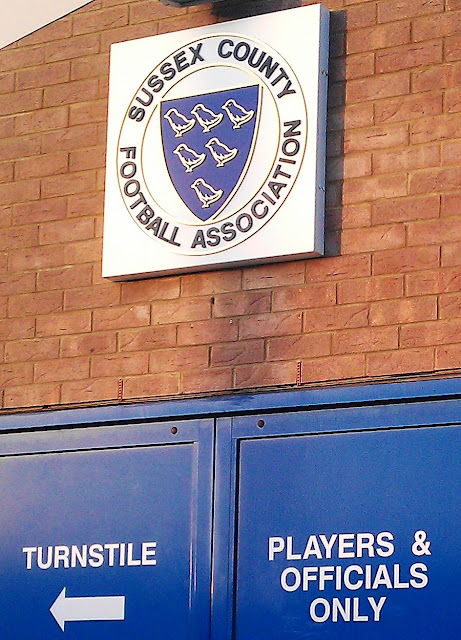 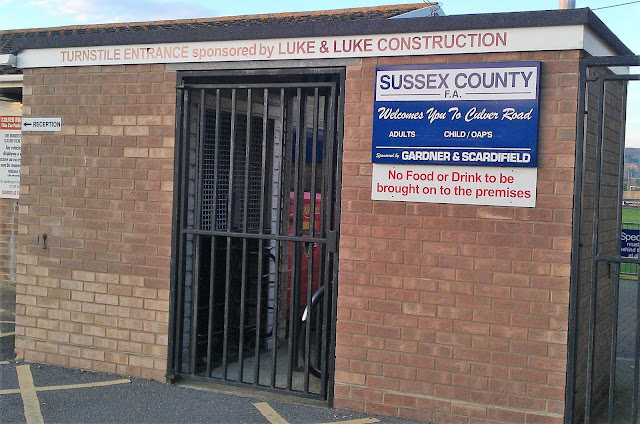 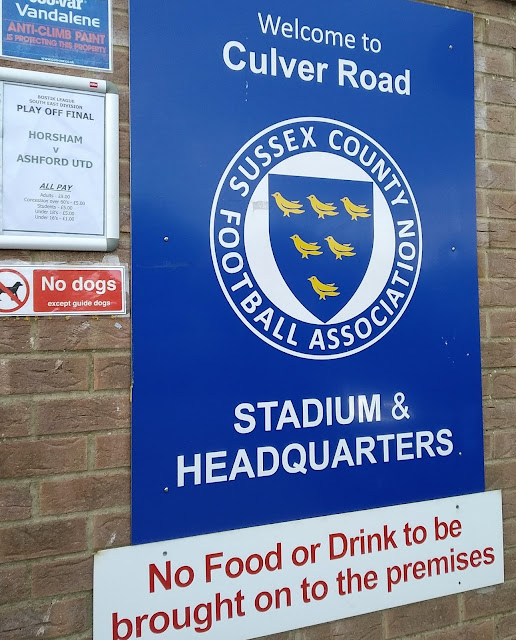 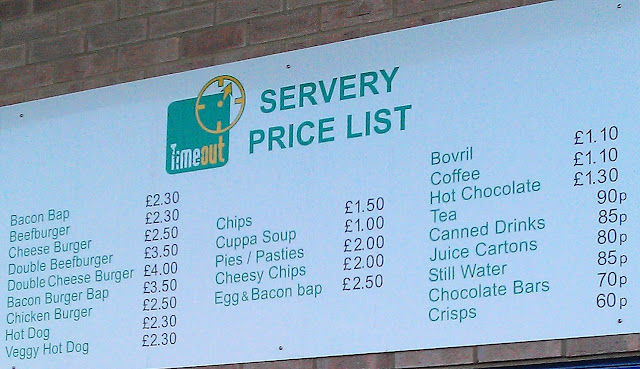 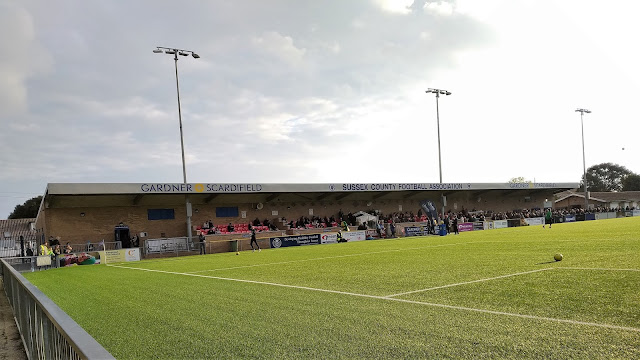 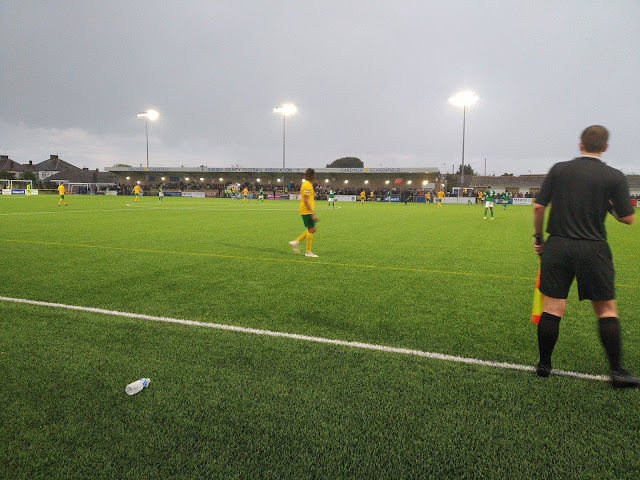 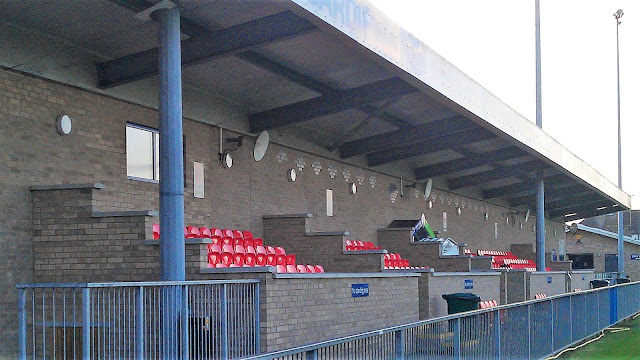 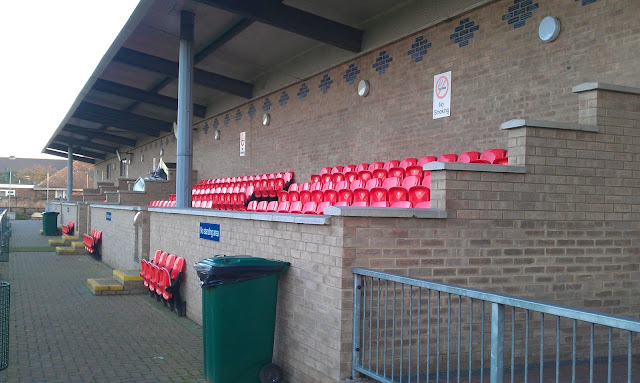 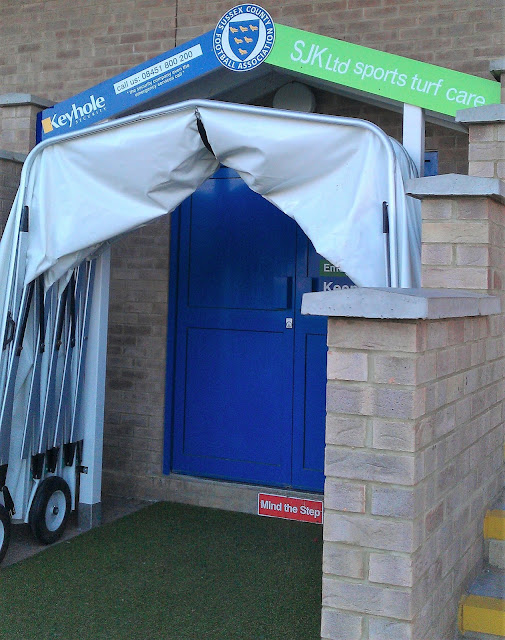 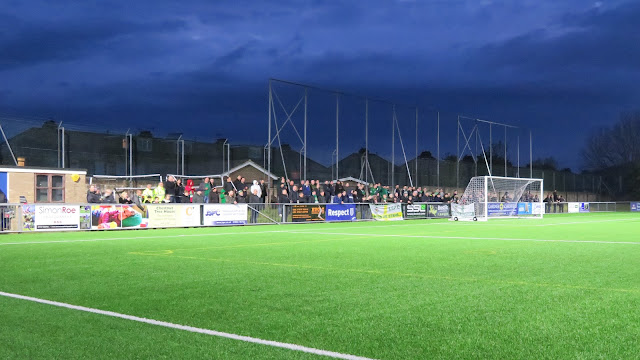 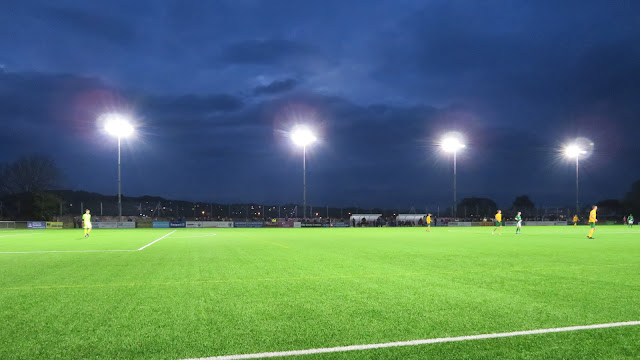 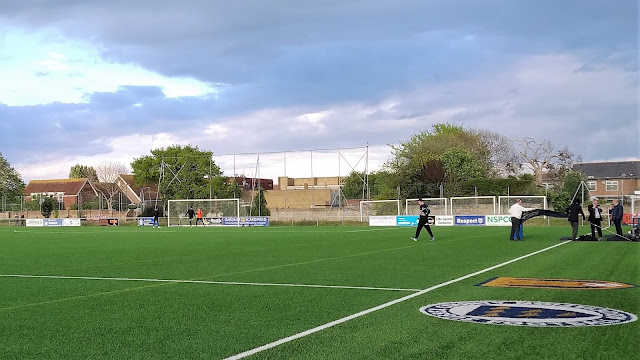 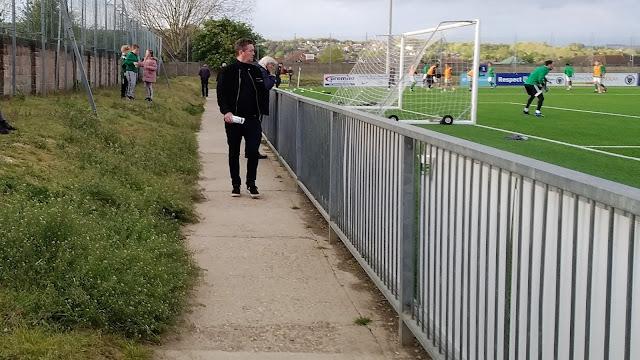